It was midday before I had finished writing in Córdoba and I may be English but I wasn’t about to join the mad dogs out in the sun. It has been getting increasingly hot and I have learnt not to try and exert myself too much or I loose all my body fluids in sweat very quickly. Instead I went for a wander around the city, meandering through the twisting narrow cobbled back streets and peering into the little internal courtyards through any open door. The Cordobans have raised these little spaces to an art form and have associations to support the creation and restoration of “vestibules”. Awards, plaques and prizes are contested. With exquisite tiled floors and walls, lemon or orange trees in huge earthernware pots and a profusion of flowers in every available space they put our hallways to shame. A sideboard, gilt frame mirror and deep pile carpet just doesn’t cut it. 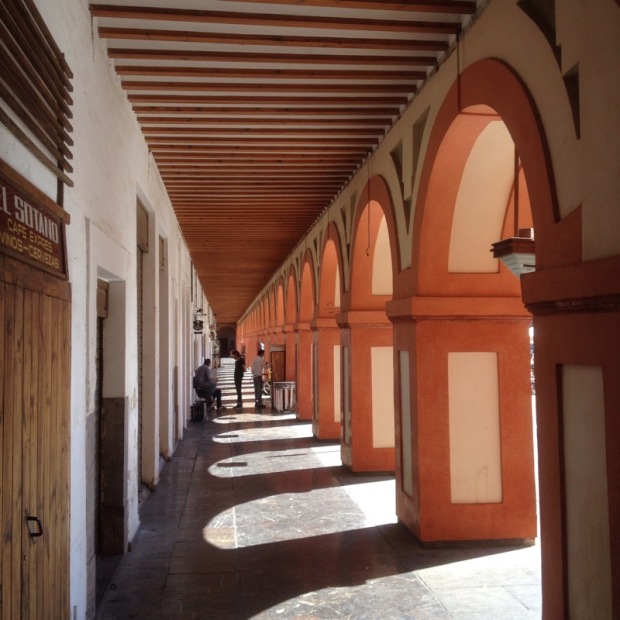 These Spanish towns and cities are so rich in ancient buildings and especially churches I wonder what the Irish urban landscape would have been like given more money and less oppression. 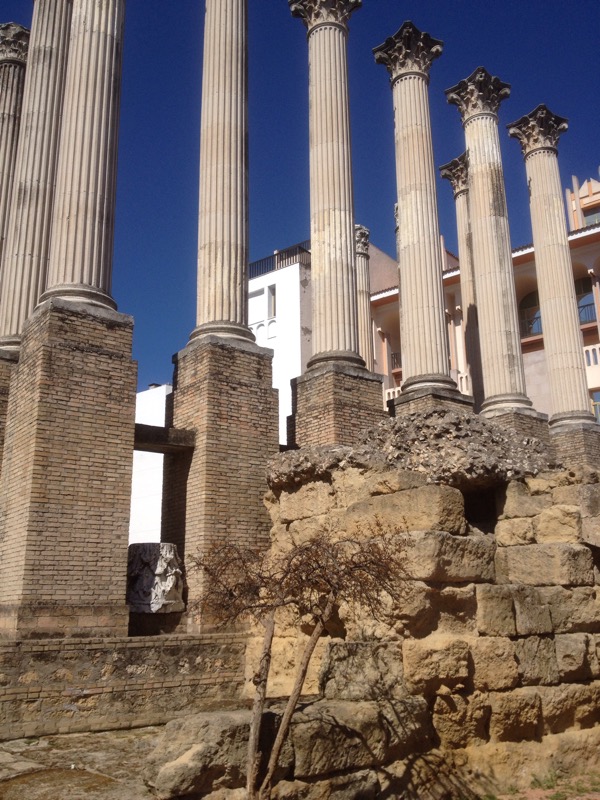 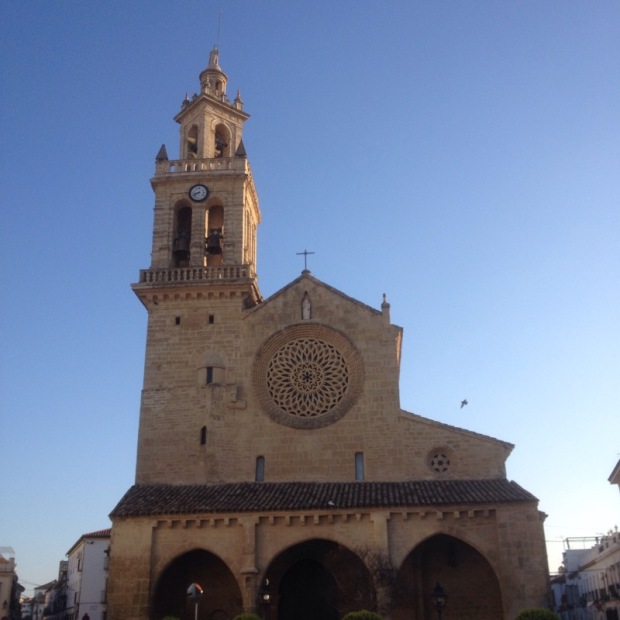 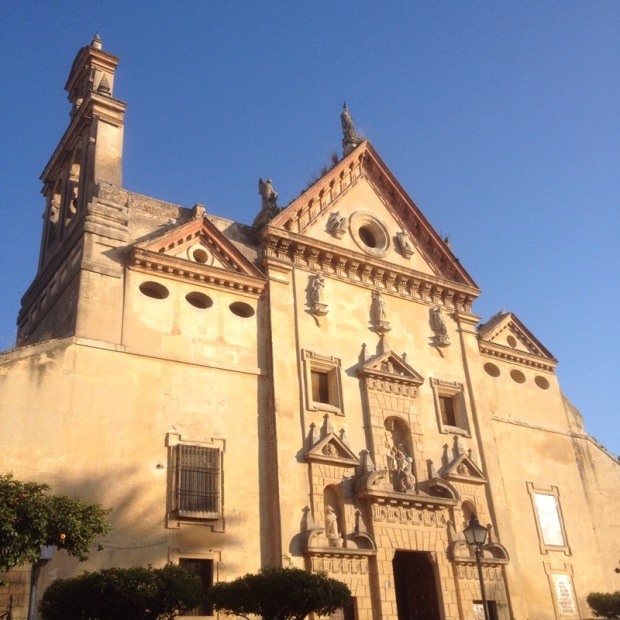 I set off in the early morning as the kids found their way to school down the warren of narrow lanes alongside old men with tiny transistor radios in their top pockets and macho looking men walking little lap dogs. Bars were busy with clusters of talkative smokers outside.

Out of the old city into the suburbs with big blocks of flats, washing hanging from the lines outside their windows, and very soon after passing the old roman bridge, out into the wild. 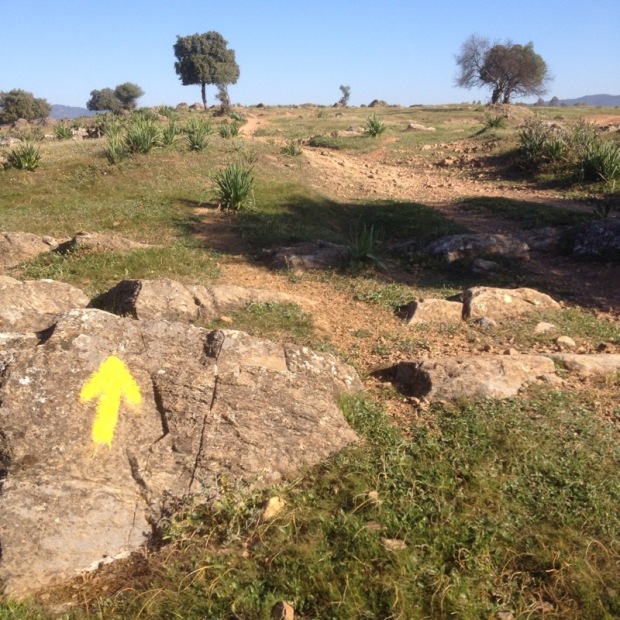 Here there were men pursuing another popular Spanish pastime, flying remote control planes whilst sheperds herded their flock through the fly tipping zone.

The hills beyond were of uncultivated scrub, holm oak, wild olive, rock rose and cistus, broom and mimosa. And then a familiar smell not enjoyed since the Canaries of pine. The nice rounded tops of the Mediterranean pine. Exposed rock in layers of horizontal strata and yellow arrows everywhere. 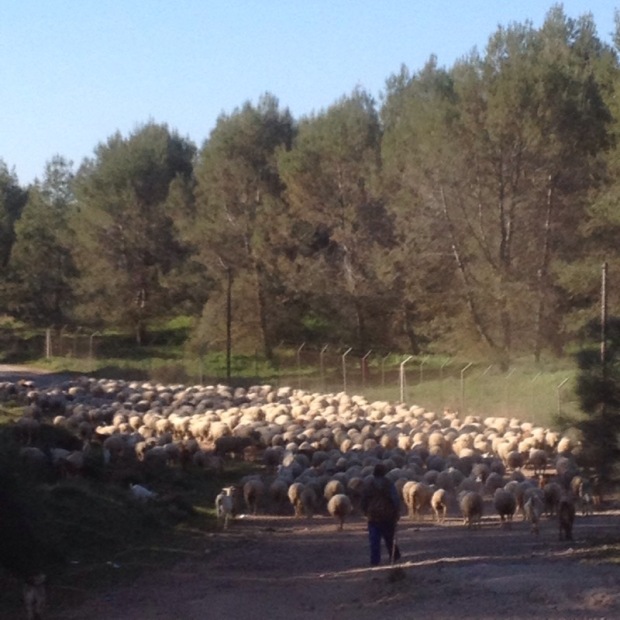 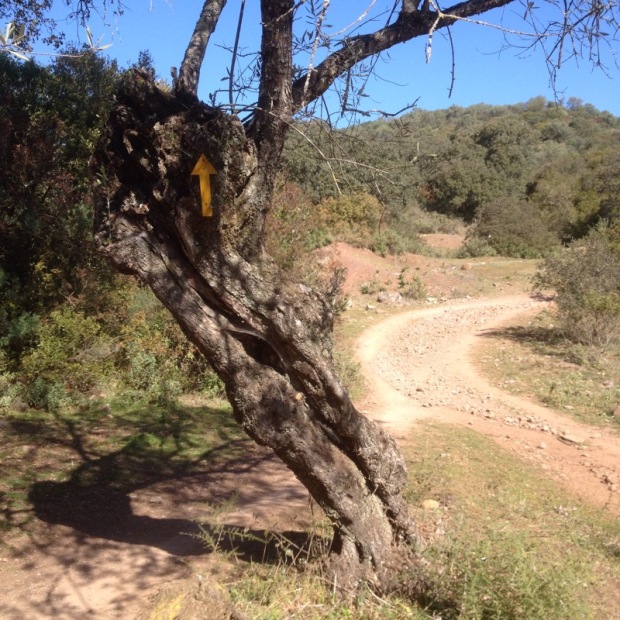 I came to an old abandoned railway that was to accompany me ,on and off, for the next few days. 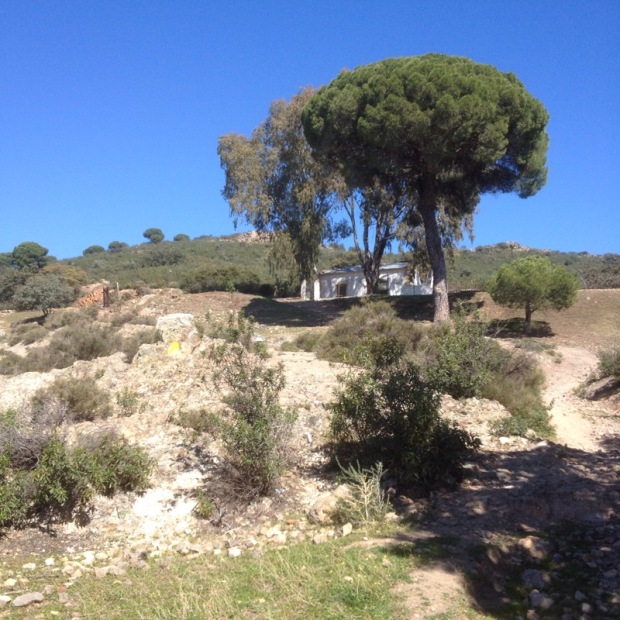 At a little trackside shrine I found some offerings in a tree stump and had a pleasant lunch with the bleating of lambs and the clink clonk of their mothers bells as background music. 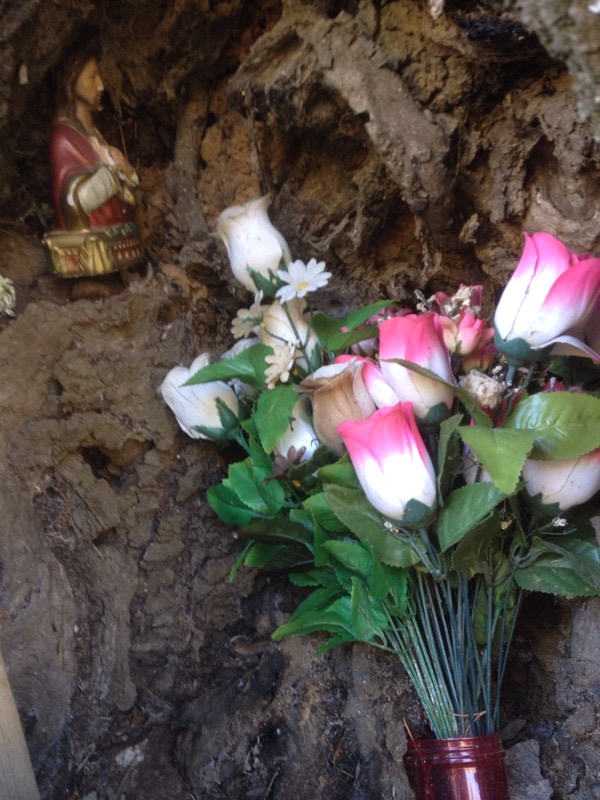 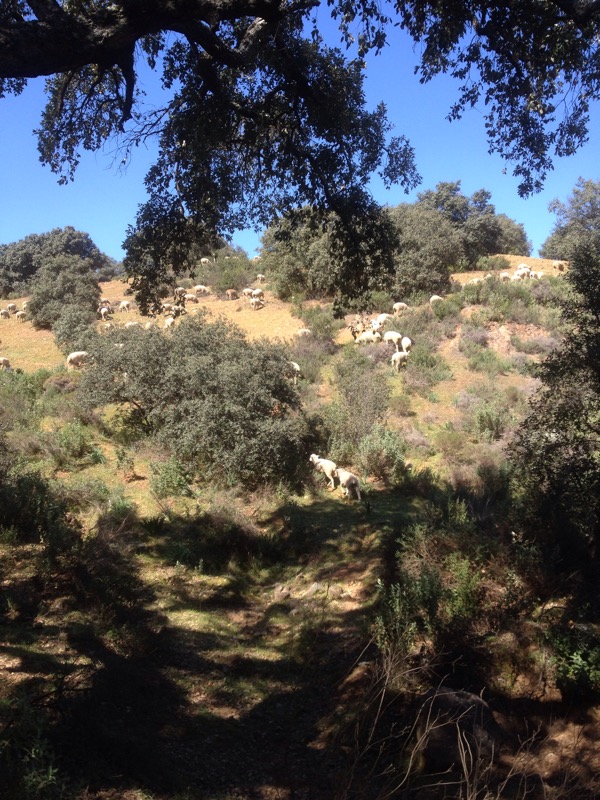 The information I’d been given in Malaga included the phone number of a “welcome ” house for pilgrims in the next town Cerro Muriano. This was an unofficial albergue run by a Dutch couple who had been volunteer hospitals row in numerous albergues for a few years and decided to set up on their own. I was given a warm welcome at their rented suburban villa and sat and chatted with them in the outside kitchen. They told me that even North of Córdoba when all three branches of the MOZARABE had joined together there are only about 200 pilgrims a year as opposed to the 2000 a day they were dealing with in the Compostella office in Santiago last summer.

The house, set amongst the pines, is a very relaxing space and after a good sleep I set out armed with Yan’s info on the way ahead. There is a large army camp and firing range to be crossed and then it’s back to the rolling scrubland before coming down to the oak studded grazing land of Guadiato valley.

I was following the old drovers way the Canada Real Soriana and it made for beautiful and easy walking with occasional signs to remind me who I was and where I was going. 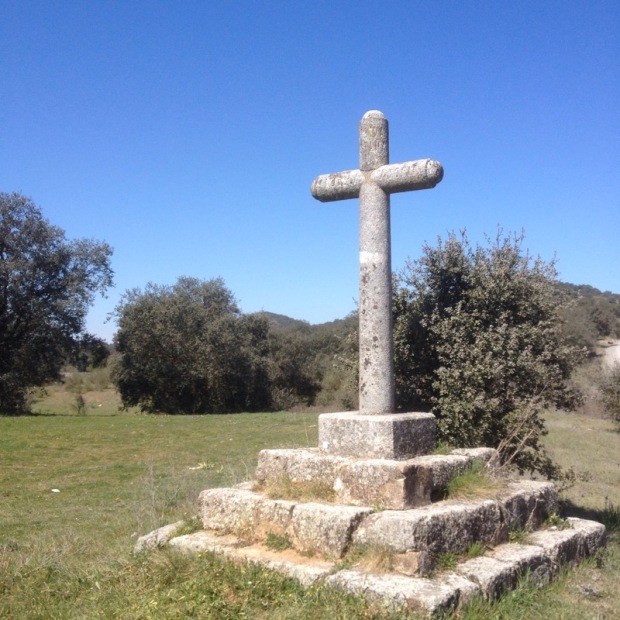 The scenery continued wild and pretty all the way into Villaharta where I went to the town hall and organised to stay in the changing room of the sports hall. It’s a 39km stage tomorrow that I may split into two and camp out if I come across somewhere nice. 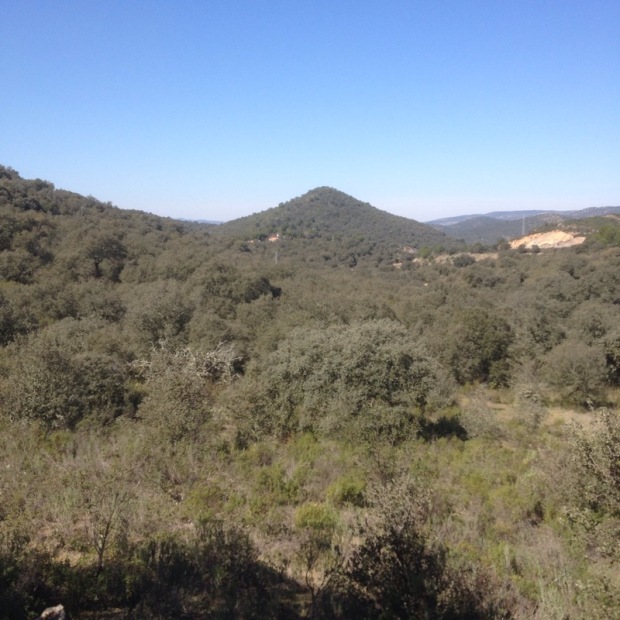 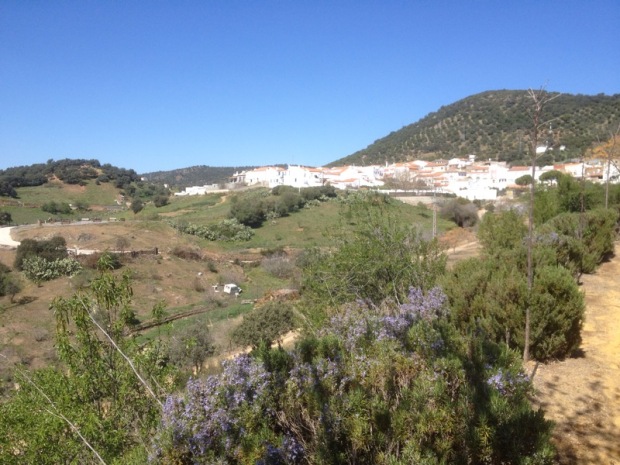 In the meantime I shall make myself at home on my exercise mat. I just hope there are no late basketball games planned to night. 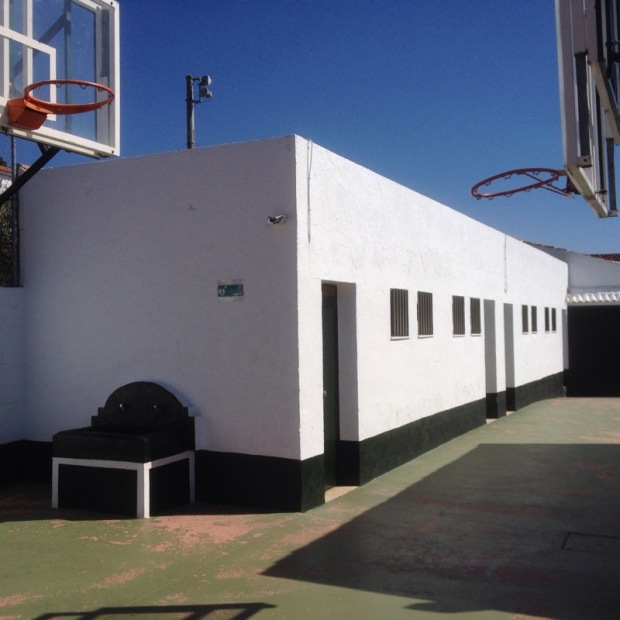