It was now almost 2 months ago that we finally got round to heading north to experience the Antrim coastline over a couple of days hiking the Causeway Coast. In the middle of June we drove north through Storm Hector, listening to the government warnings on the camper radio telling us to stay at home and not to risk venturing out. A long blustery drive up the west from south Co Galway, we were surprised when we reached Donegal to discover we were only half way there.

However by midday we were parked up in the harbour at Ballycastle, the finish of the Way, where we left the camper and took a taxi over to the start of the walk in Portstewart. It was another of those slightly irritating journeys when you ponder the sense of taking 2 days to walk a winding route of 52km whilst sitting comfortably in a car that takes a bit over half an hour over a straighter road.

The Blue Flag beach where the taxi dropped us was basking in sunshine, and vast. Owned and managed by the National Trust which tries to protect the dunes and has established bird hides to admire the wading birds and waterfowl.

We took a look at Tubber Patrick, St Patricks well, originally used by prehistoric communities as a source of water and medical cures. When St Paddy past through around 450AD he blessed the well and started a pilgrimage which developed into a fair on the last monday of August with horse races on the beach. Locals would sell the holy water to tourists right up until the 1940’s.

Setting off on the 10km section to Portrush we past a salmon fisherman’s cottage, part of a once thriving and prosperous industry all along this coast until quite recently. Maybe the occupant of the grave of an unknown sailor, a little further along the shoreline, was a salmon fisherman himself. 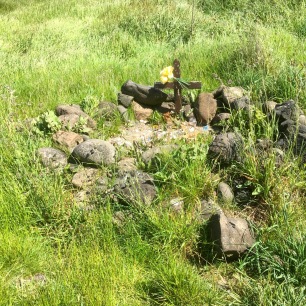 On the rocky sections of this coast, between the sandy beaches, we came upon numerous swimming pools over the next couple of days. A little bit of well placed concrete and some ladders and steps turned the wild waters into placid bathing places. 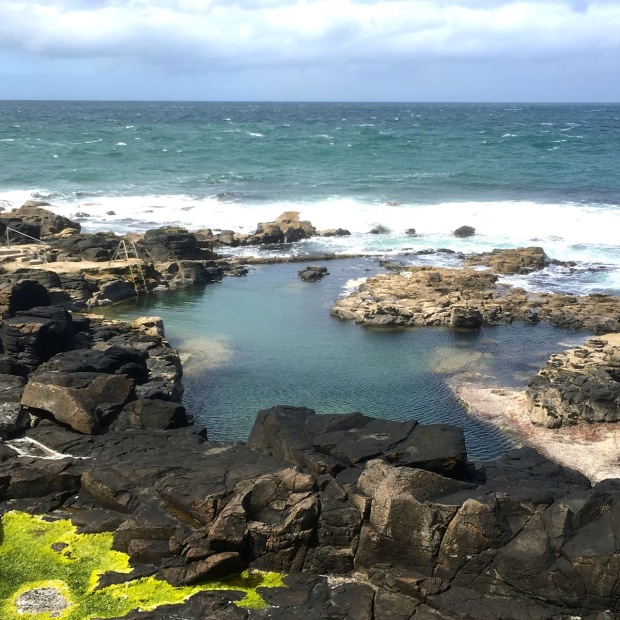 There were also a lot of golf courses and beautifully positioned houses amongst the cliffs and dunes. The whole causeway coast is an AONB, an area of outstanding beauty, and within it there are a number of SAC’s (special area of conservation), SPA’s (special protection area’s), ASSI’s ( area of special scientific interest) and an NNR (national nature reserve). The Giants Causeway itself is a WHS (world heritage site) and with all these protected areas the owners of these houses are obviously living where no planning would be granted now. 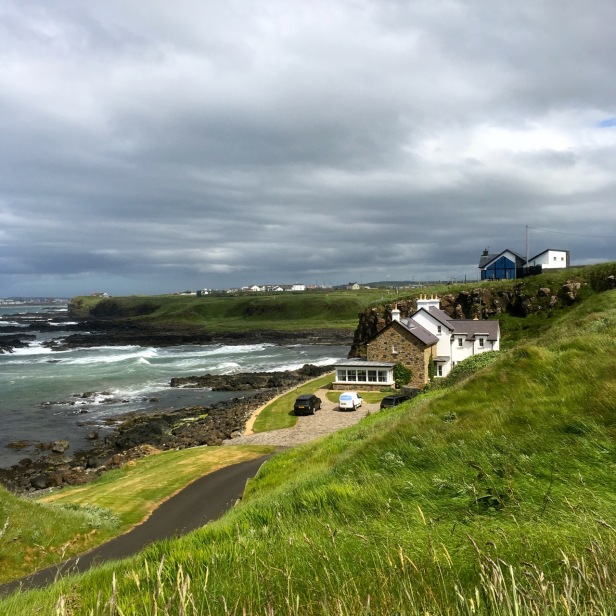 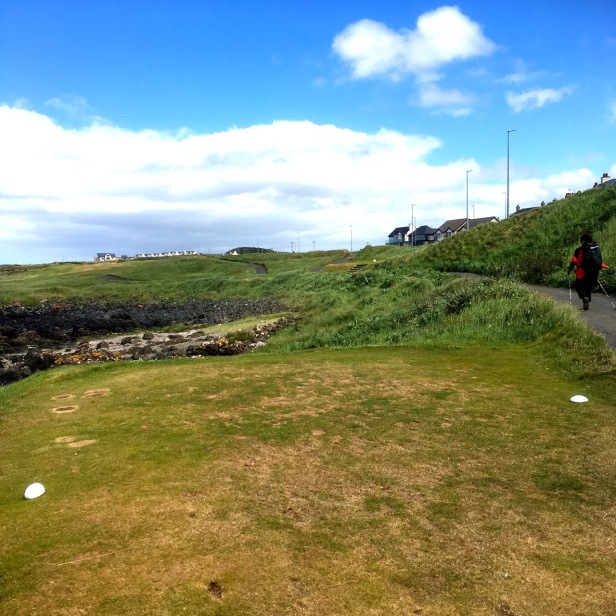 The Rosa Rugosa plants obviously liked it here and were running wild and rampant along the Way for miles. They had colonised the edges of the many golf links and must have made the retrieval of errant golf balls a prickly business. Passing a grassy promontory where we struggled to make out the remains of Ballyreagh Castle before we crossed the wide sweeping bay of the West Strand and on to Portrush harbour with its neat display of  boats made fast with a network of ropes.

Unfortunately the route east along the Curran Strand, a glorious 2km stretch of fine golden sand to our bed for the night at White Rocks, had been closed off for filming Artemis Fowl and rather then walk along the busy A2 we decided to try climbing over the dunes and cutting across the famous and expensive Portstewart golf course. A bit of a mistake as we hadn’t realised the size of the three 18hole courses and the number of fairways we were going to have to negotiate whilst wealthy players waited for the rucksack ramblers to get out of their way.

We eventually and somewhat miraculously made it to the back door of our airbnb where we discovered that the winding coast road we were to continue on in the morning was also due to be closed for filming. We went off to the neighbouring hotel for a drink and to mingle with the stars supposedly staying there. And to complain to Kenneth Branagh, the director, about the inconvenience his movie was causing us. Maybe. If we saw him.

We couldn’t find Kenneth so hung out on the patio soaking up the moody sea views and discovered from security that the road wouldn’t be closed till 8am, giving us time to claim it.

Bright and early we were down on the shore admiring the limestone cliffs backing the beach that give White Rocks its name. Amongst the white were many hard black boulders of basalt, spat out of volcanos in one of the 3 great outpourings of lava over 60 million years ago that also created the Giants Causeway. 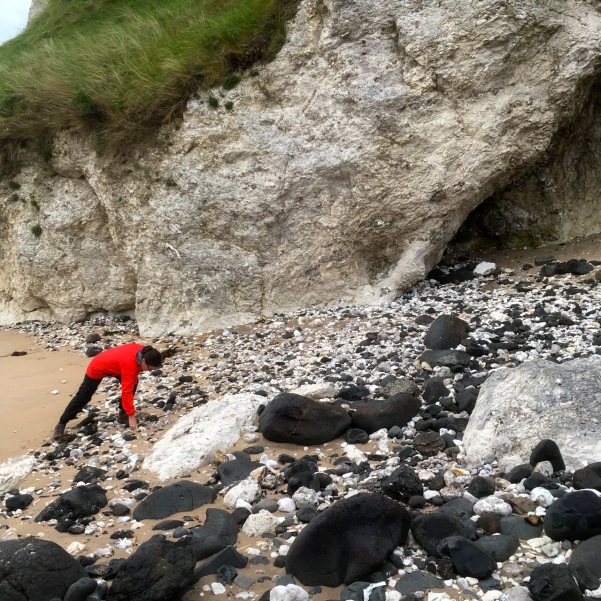 The car parks above the beach were getting very busy with film crew and we figured it was time to get going. There are numerous locations along this coast made famous through the filming of The Game of Thrones and the roads can be full of tour buses rushing from one to another. Luckily for us the A2 we were walking down had been closed to vehicles but filming had not started, allowing us the rare opportunity of sauntering down the middle of the usually busy and noisy road, admiring the magnificent sea views in peace.

We stopped to explore Dunluce Castle a medieval masterpiece perched spectacularly on a rocky promontory high above the sea. The castle was still not open when we got there but we were able to explore around the outside and imagine the “lost town of Dunluce” recently unearthed by archaeologists.

Back to join another, open road, we passed through the small town of Portballintrae, down to Runkerry Beach and crossed the river Bush (of Bushmills whiskey fame) to join a wooden boardwalk alongside the bank for a bit before turning onto a gravel path through the sand dunes and crisscrossing the old Bushmills to Giants Causeway railway line. 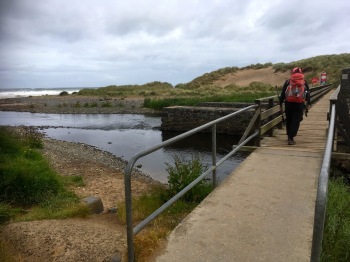 At the far end of the long beach we past under the impressive victorian edifice of Runkerry House, around the Point and climbed up on to the grassy clifftop we were to follow for the next 10km. Next up was the tourist honeypot of the Giants Causeway, and it was heaving. Declining the offer of £11.50 tickets to visit the Visitor Centre we instead joined the human snake down the access road to the (free2view) causeway.

The legendary basalt rock formations and columns were impressive enough to overcome the distraction of hundreds of other sightseers although the cliffs and coastline beyond were equally impressive and devoid of people. 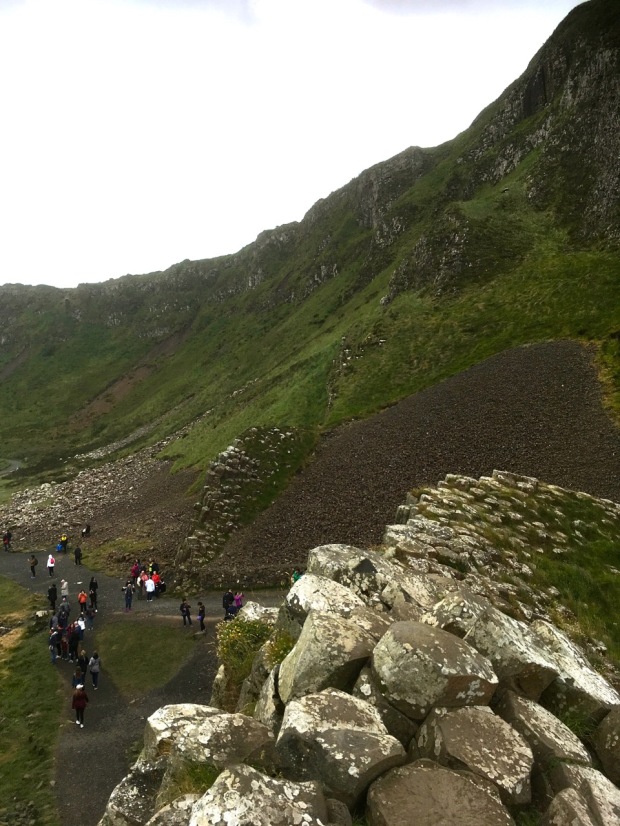 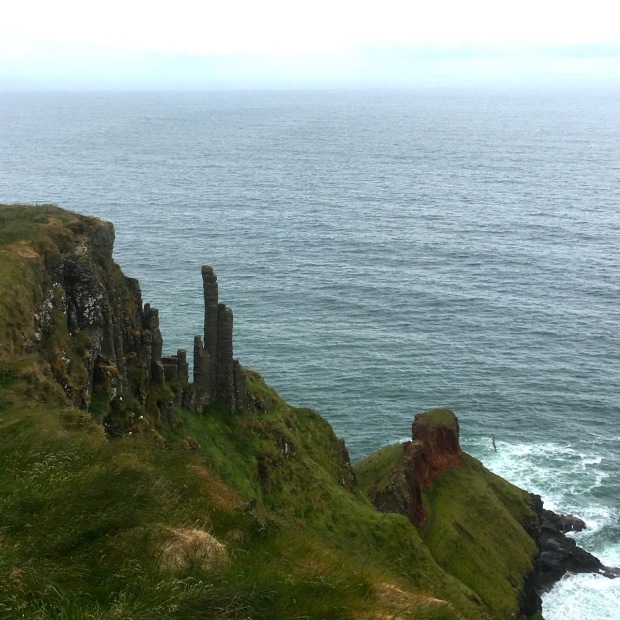 From the sea level we climbed the steep “Shepherds Steps” to rejoin the cliff path and walked along the highest part of the Way rising slowly up to Benbane Head from where we looked back down to the final resting place of the Girona, a Spanish Armada ship wrecked with the loss of 1300 lives. In 1967 the wreck gave up many treasures to a team of divers which are now displayed in Belfast’s Ulster Museum.

From this highpoint of 100m we steadily descended south east, passing above the beautiful Port Moon bay, an historical fishery now home to a bothy for kayakers and down to sea level again at the ruins of Dunseverick Castle, an ancient promontory fort once important enough to lie at the end of one of the 5 roads emanating from Tara. After being sacked by vikings it fell into ruin and little remains of it now. 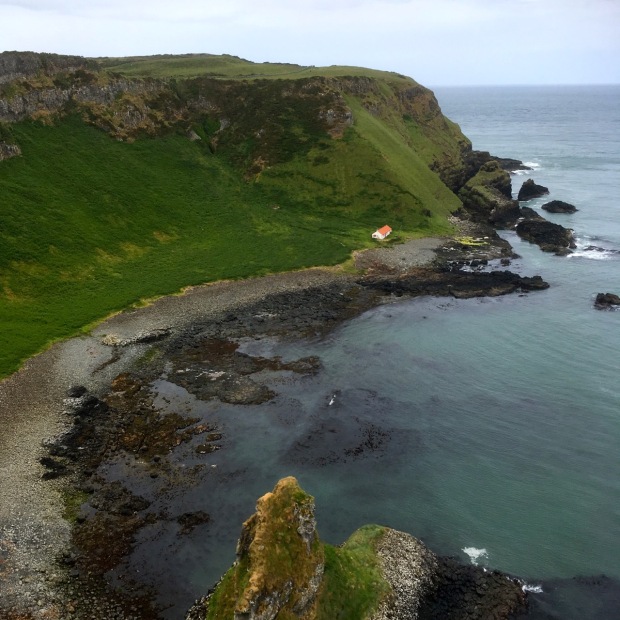 A little way passed the ruins we made a mistake. We believed our guidebook, published by WalkN.I., when it told us that the way forward along the coast had been blocked by landslides and it was necessary to divert along the busy A2. We did think about risking it and trying to find a way through but with the evening approaching and a fair way to go we didn’t want to get stuck on some cliff face and have to retraced our steps so we reluctantly turned on to the pavement less road and put our heads down for the couple of kms to Portbraddan squeezing ourselves into the hedge as cars and buses roared passed.

From there we were able, just, to negotiate the slippy boulders at the foot of the cliffs as the tide was sufficiently out, and to clamber around to White Park Bay, one of the first places in Ireland to be settled by Neolithic communities. 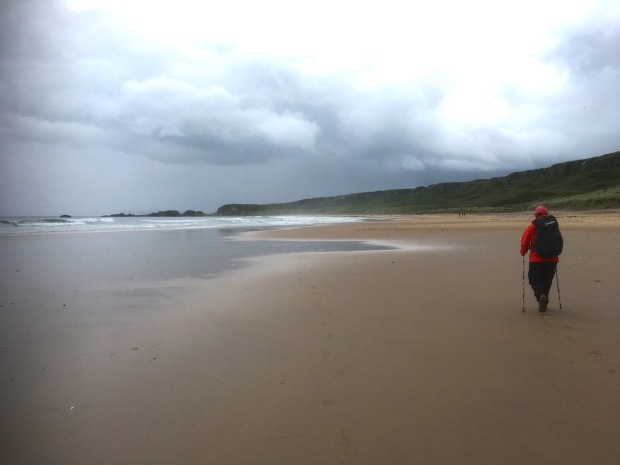 Nearing the end of the beach we turned off route, away from the rock arches, stacks and islets that lead towards Ballintoy harbour, (another Game of Thrones location) and up a farm track to find our accommodation for the night. A long day of nearly 30km with the diversion was celebrated with a good dinner and some samples of local ale.

In the morning we backtracked slightly to visit the scenic harbour before continuing on a path between the potato fields and along the cliff tops with fine views down towards Rathlin Island and Fair Head. 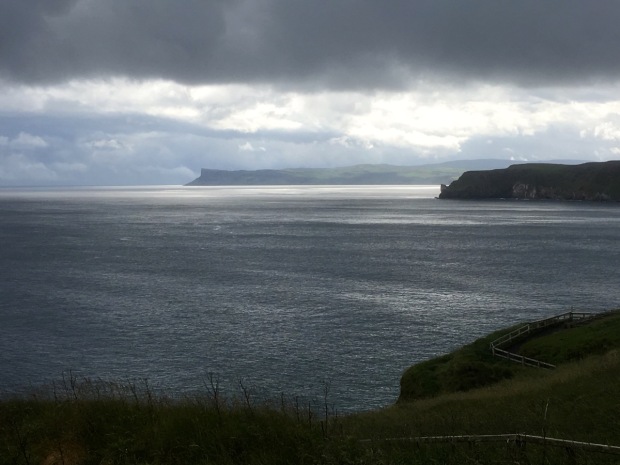 From Larry Bane Head it was a short distance to the car and coach park, tearoom, giftshop, toilets and ticket office of another National Trust money spinner, the Carrick-a-rede rope bridge. For over 350 years fisherman raised a rope between the mainland and a small island on the migratory route of the salmon to access their nets. The rope bridge has been remade into a sturdy permanent structure with enough wobble to thrill a stream of tourists as they cross 30m above the waves for a brief visit before returning to claim their certificate.

Avoiding the groups queuing to leave the reception at timed intervals, and the £8 fee for crossing the bridge, we walked the 1km to the island to see what all the fuss was about.

The salmon are gone and the fishermen with them but what was once a scene of hardship has been modified to satisfy the booming industry of today, tourism.

After the previous days experience of avoiding the tourist buses hurtling down the road we decided to avoid the remaining 8km of tarmac to Ballycastle and take the bus. In the towns tourist office they told us that they recommended to all walkers on the Way to do likewise as the traffic was so bad and there were no footpaths or pavements. They also told us that the diversion we had followed was no longer in use and we could have followed a lovely coastal path.

They still had the misleading WalkNI guide on their shelves.

Overall it was a beautiful hike with some of the most impressive coastal scenery we’ve ever seen. You certainly can’t blame the masses of tourists for wanting to visit the sights, but its a pity more of them didn’t get out to explore the equally spectacular sights a little further down the trail.