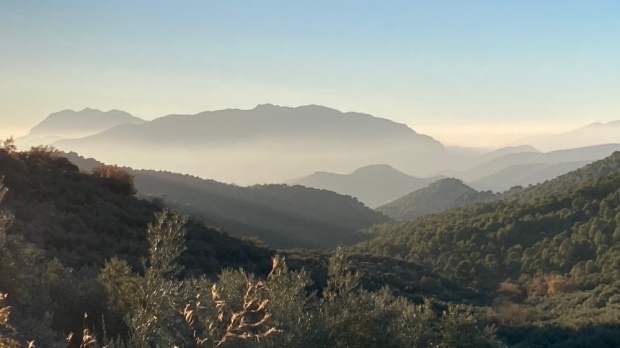 About 550km south of the Canon del Rio Lobos is the Parque Natural de Sierra Mágina. Established in 1989 the 20,000 hectare protected area is in the province of Jaen. Named by the Moors as the Mountains of the Spirits its rugged limestone peaks reach over 2000 m and are surrounded by the largest olive growing area in Spain. The Jaen province produces 50% of Spain’s production and 20% of the world total. That’s a lot of picking. Over half a million hectares of olive trees.

The Sierra rises up out of the sea of olives in distinct layers of altitude levels. Forests of pines and oaks give way to juniper, yew and a rich mix of flora species, 45 of which are endemic to the region such as the hedgehog broom. The Sierra’s particular ecosystems and climatic niches make it one of the most important environments in Spain and also support endemic fauna such as the rare black cork oak spider, a snail that lives in fissures in the rocks and a high altitude grasshopper. We were disappointed not to sight the rare Betica midwife toad.

For hundreds of years the Sierra was the natural border between the Muslim kingdom of Granada and Christian Castilla and the fortifications and castles from that period still loom over the land.

We parked up above one of the best preserved and oldest in Andalucia in Jódar hoping to visit it and the parks information centre inside but it remained stubbornly closed throughout all advertised opening hours. But the view was good.

Moving on into the park in the morning we drove up to the Area Recreativa Cuadros and walked through the river side oleander forest that housed many shady picnic tables and benches and up on paths of needles and stone into the pines. 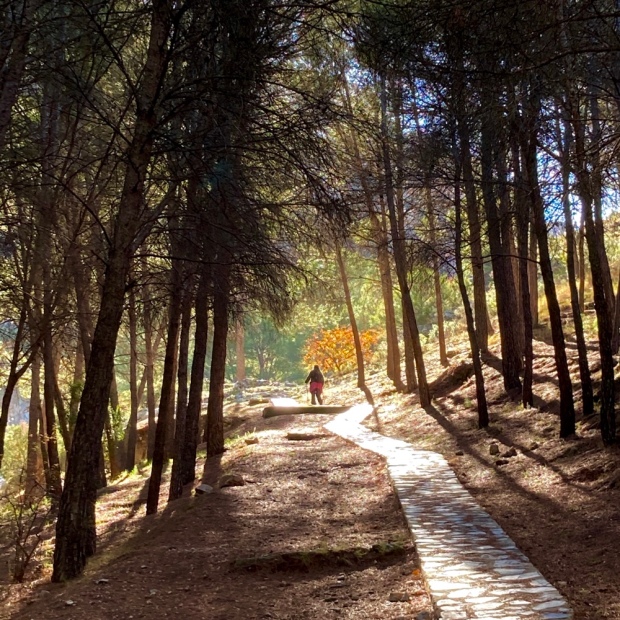 We were on the Las Vinas trail, named after the  vineyards that predominated here until the late 19th c when the phylloxera epidemic wiped out that livelihood. A 10 km loop it circled up above the River Cuadros valley through the pines and back down through the olives. The woods were thick with the mastic shrub, Pistacia Lentiscus, from which the sap would be harvested by cutting the bark and turned into a substance for everything from chewing gum to varnish.

The aromatic incense juniper was another common species while the colourful leaves of maples reminded us of the season.

Emerging from the trees the views of mountain and plain opened up and the noise of the petrol engined olive rakes buzzed from below. 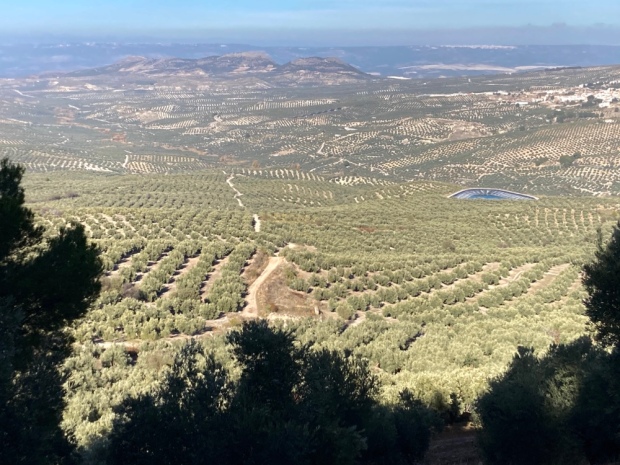 We stopped at a fuente and were joined by the GR 7 /E4 walking route, on its way across Europe to Greece. Then we continued on a track through the groves on a spur to visit the 11th century Torreón de Cuadros, the Chequered Tower – so called because of its two tone appearance due to its construction of stone from two different quarries.

Jaen province has the highest concentration of castles and defensive buildings in Spain and this 12m high watchtower with its arrow slits stood high over the gorge- guarding the Muslim/ Christian frontier.

Returning to the loop we managed to find our way on an unmarked route back to the oleander forest,( Europe’s biggest!), along an acequia which involved a 50m tunnel.

Back in the camper we drove around to the southern side of the park and high up on rough dirt roads, past the Area Recreativa Gibralerca, and on to a fine high park up amidst the Holm oak, with sunset views over the highest peaks of the Sierra. 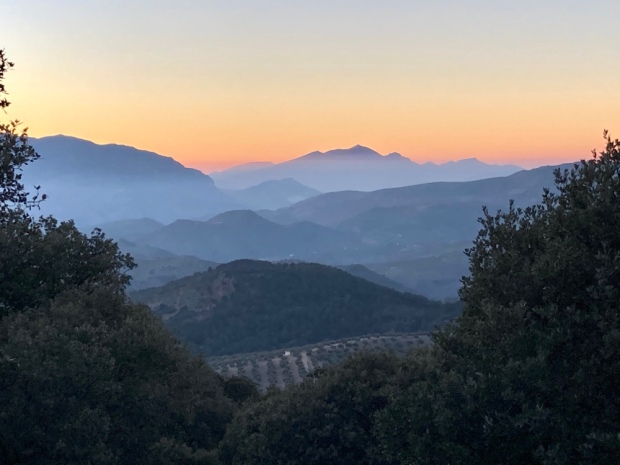 With the help of walking app Wikiloc I had sorted another 10km loop for the morning but this one involved a bigger elevation gain to reach a summit called Pico de la Laguna at 1525m. Setting off down the track in the morning it was still frosty in the shady ravines but we certainly warmed up when scrambling up the steep firebreak for 400m to follow the ibex we saw running across the rocky shoulder towards the mountain top.

The view more than rewarded our efforts with a magnificent 360 covering a vast area of Andalucia. But the cold wind moved us on over the mountain towards a forest fire lookout station on a lower peak to the northeast. Even on this inhospitable high ground there were signs of land management with traces of stone wall and flat areas of cleared high pasture and coppice Holm oaks. 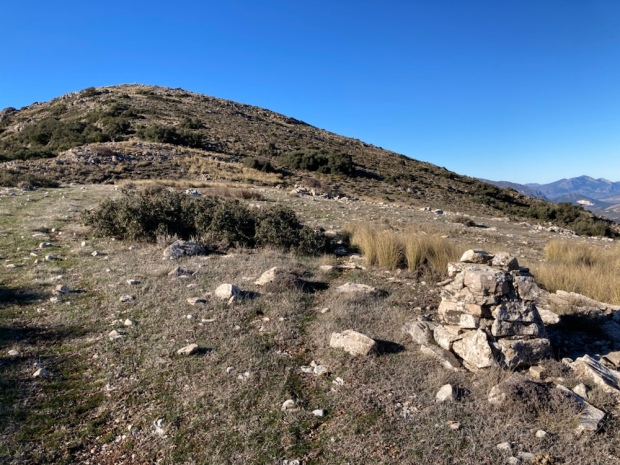 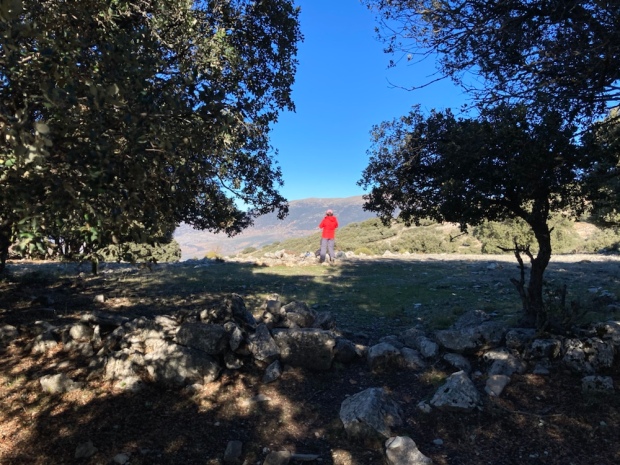 Down past the herbage manicured by animal teeth and up to the lonely lookout, empty now, perhaps out of season, perhaps the lookout is busy picking olives from the multitude below.

A longer decent on the firebreak and we were on track to the camper again giving us time to visit the park info centre at nearby Mata Bejid where the reconstruction model of our walks did not seem quite so epic as they had appeared to us.