24 km today to Orzola, to finish the GR131 in Lanzarote.
It was a beautiful day, both in terms of walking and weather.
Leaving a sleeping household in Teguise I crossed the plaza that containers the biggest market on the island every Sunday, past the football ground and school and headed for the hills. Literally, because today I crossed the highest ground on Lanzarote.
A dirt track took me passed more vegetable plots and then I started to ascend on a stony track.
Looking back I could see Teguise and the castle above it turning rosy in the rising sunlight. 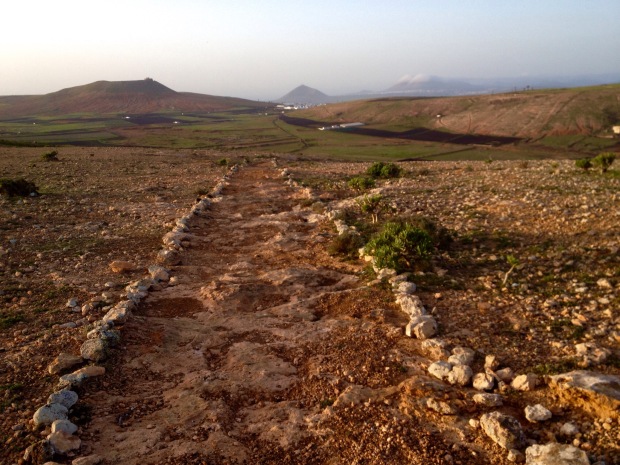 At the top of the crest I joined a broad dirt road that continued to climb towards the distant mountain top.
The little chapel de las Nieves, originally Moorish, stood out against the blue sky at 590mts.
Around the back of it began a dramatic cliff path, not routed as part of the 131, that avoids a few kms of tarmac and gives the finest trekking on the whole route. 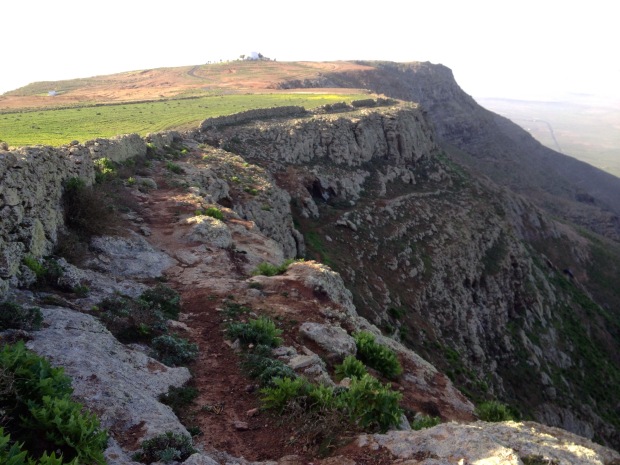 Penas Del Cache, the highest point on the island comes into view, crowned with the domes of a military installation.

A truly beautiful route with spectacular volcanic cliffs towering over a view of the whole southend of the island.
A less attractive view was supplied by the farm I could smell way before I could see it.

Not exactly free range.
On the steep descent towards Haria a stony path formed a double helix with a zig zag hairpin road 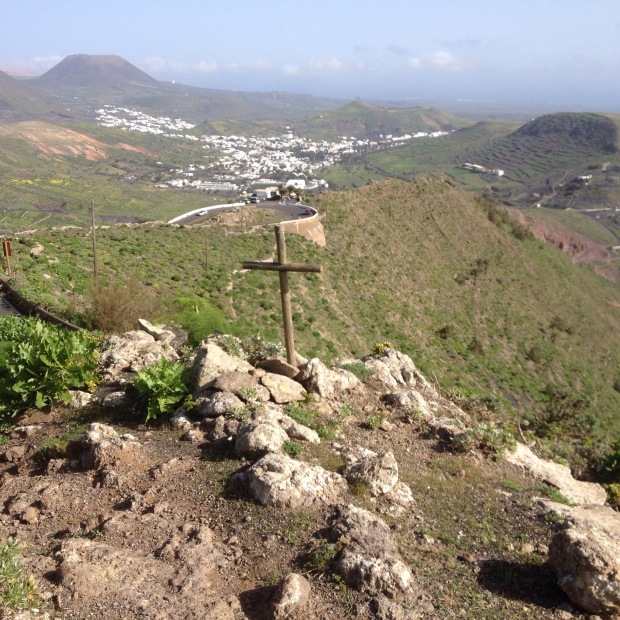 I exchanged waves with a man out pruning his grapes.

On the village edge I stopped for a rest in the garden of the Cesar Manrique house and museum. The artist and architect who died in 1992 spent the last years of his life transforming a traditional house in a style that is still so redolent in the design of buildings on the island. His ideas, taken on board by authorities, enabled the island to preserve its visual integrity and stopped the Costa becoming a high rise hell. The simple elegant cubist villages were there before Manrique but he saw their value and showed how to adapt them for modern times.
Even the toilets in the garden oozed with style. 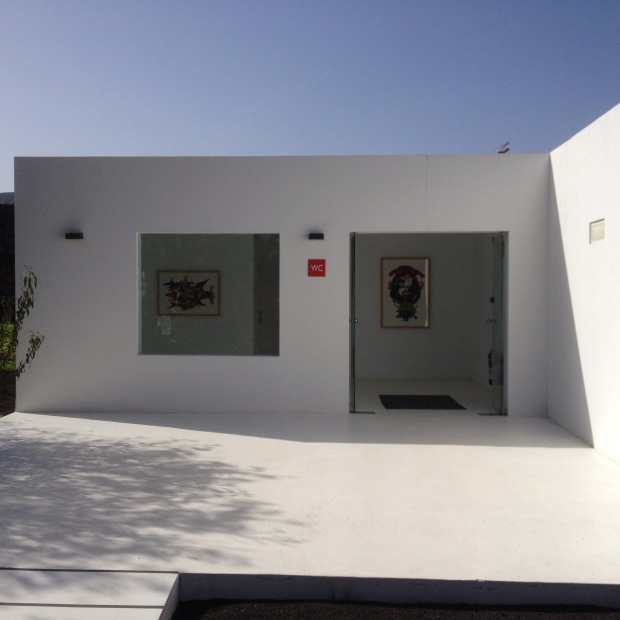 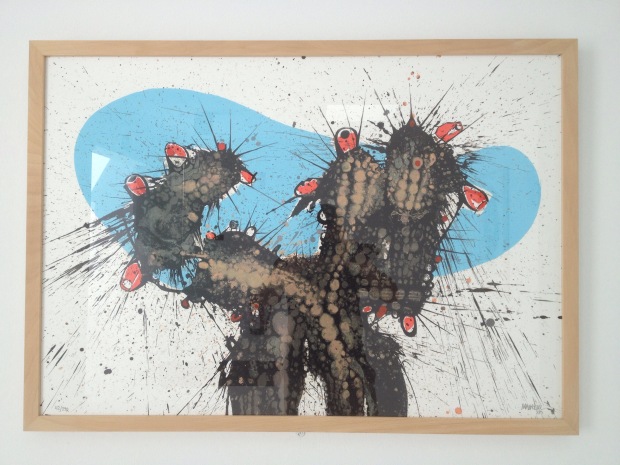 Pushing on through Haria and Montana Los Llanos I spotted a taxi driver pulling over and dashing into some prickly pears before going back and showing his customers what he had. Guessing they were the cochineal beetle I went over for a look. Sure enough, and when he smudged the poor little things it was dramatic how much vivid red came from them.

A further longish climb had me sweating and wishing for the wind back because it did cool.
Mind you the lengths people go to to protect their plants from the wind is extreme.

At the foot of Monte Corona I looked back at the hills id crossed earlier.

Finally it was a long decent down dirt track and nice ash path through the jagged lava towards the Aloe Vera fields outside Orzola.

Where disappointingly there was no signboard to announce the finish of the 73 kms of the Lanzarote leg of the Canaries Gr131. However there was a Christmas tree

The wind got up on Montana Tinasoria in the night and it was fairly cold when I packed up before dawn and headed down towards all the sparking lights of the towns below.
No sign of life in La Asomada or Tegoyo, where a whole hillside had been concreted to catch and syphon water into tanks, a giant version of some in the Burren.
Hoping for a cafe con leche I was disappointed that the bar in Concil was also shut.
By now there were people working in the black ash fields. Women in straw hats with head scarves were planting out the seedlings while the men raked away the weeds.
This ash, I think called lapalii, is fertile and holds moisture so is actually layed on land without it as a topsoil.
Coming from an Irish garden it was amazing to see the spuds, peas, onion, corn and beans all well up already.
The land was surprising green in many places.

If you look closely you may, in the left hand distance see the little white dot that was my home last night. You know what they say in the song” wherever I lay my pack, that’s my home”

There was a bit of a slog up to a gap on Montana Blanca before dropping down to the village where the bar was also shut. 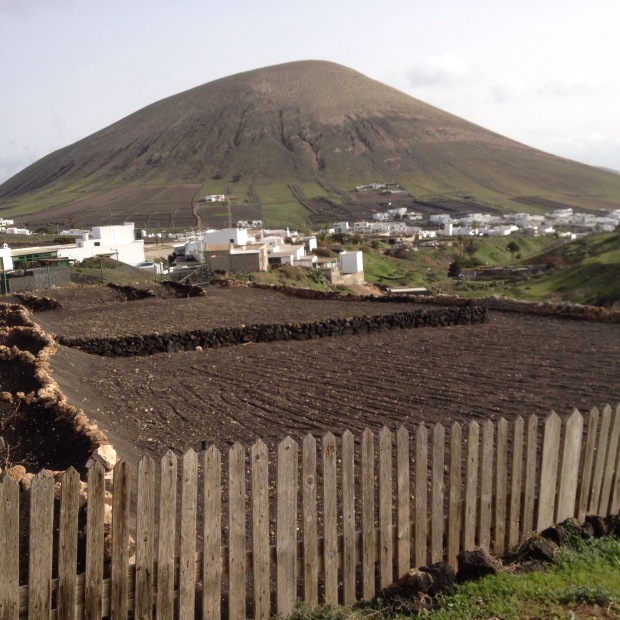 By now in need of refreshment and servicios I headed into San Bartolome rather than take the looped path.
I discovered a wonderful ethnographical museum there stuffed with thousands of artifacts from the island throughout all ages and lovely gardens and terraces covered in mosaics. 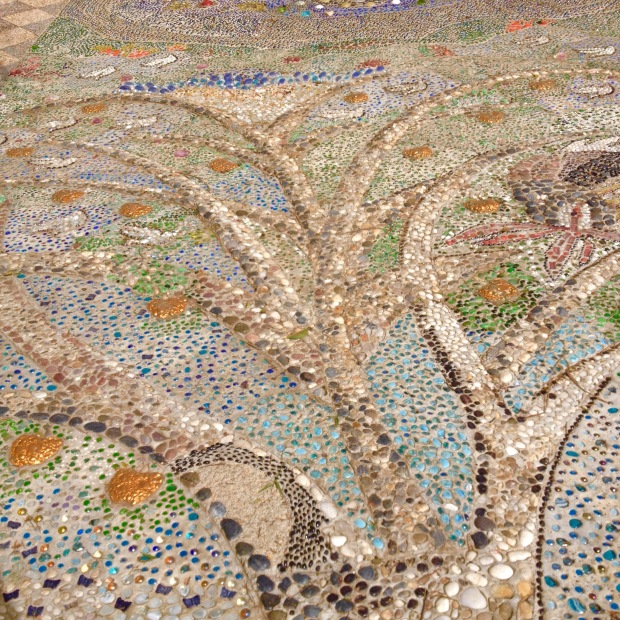 The track stretched into the distance but the walk was made pleasant by the sweet smell of the countless allysums(?) floating on the breeze.
I approached Teguise on a curving sandy track passed simple little houses with veg plots.

On the outskirts of town, an ancient capital I spied this strange collection of sculpture and many mora like it. 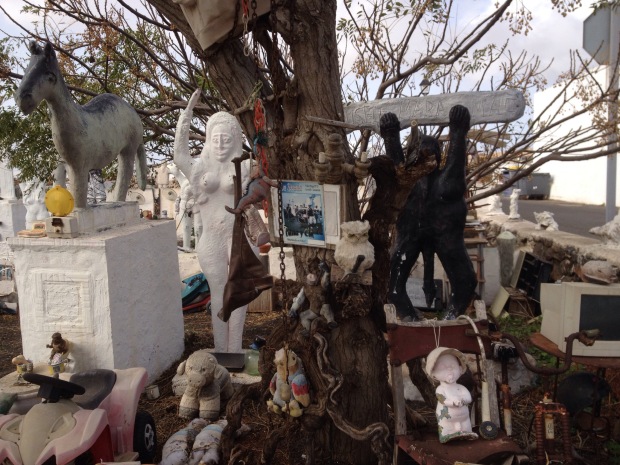 The town was full of old buildings and spacious plazas and terraces. It seemed artistic and trendy with a wealth of restaurants, galleries,interior designer, fashionable clothes shops and well heeled foreigners, but no hostels, pensions or Casa rurals.

Exploring a back alley to photograph this dog on the roof

I came upon a surf shop ( this town is in the middle of the island) and thought I bet they would help a traveller. And they did. Lovely people from France Madrid and Venezuela.
A comfy bed, a good meal with fresh veg and a real bathroom to wash the sand and ash away.

So I take back any negative comments I may have made earlier on in the blog about the good people of the waves. 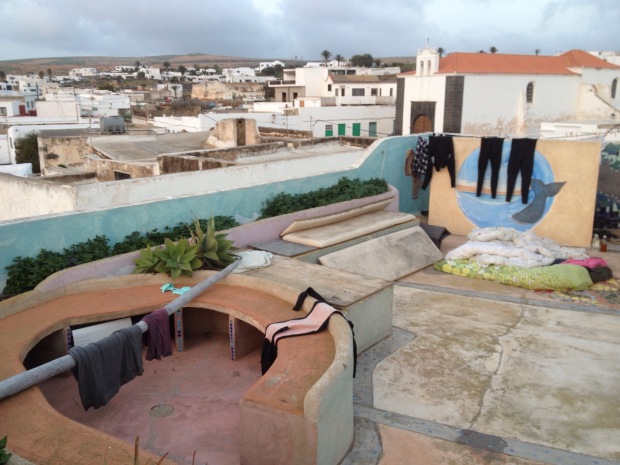 My tent is up for the first time this trip. So far I’ve just been in the bivvy bag but it could be windy or drizzly tonight so thought I’d risk it ( it’s technically illegal )

I’m up here with the parascenders and the hangliders on the slopes of Montana Tinasoria about 10km past the end of the 1st stage in Yaiza.
I was glad to get out of Playa Blanca although if I’d made it to the kariokie it seems I would never had wanted to. 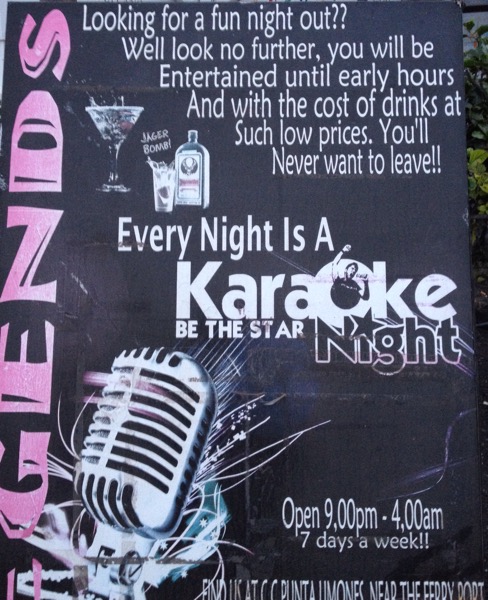 but soon enough I was on the trail proper through the recently marked and signed lava fields. The day was dull and cloudy and the black ash fields did little to brighten it.

I could see over to the west coast as I picked my way carefully over the rocks. With my hiking poles probing and searching for solid ground and balance I felt like some kind of insect with twitching feelers.
Up past a goat farm into Brena which had the best cactus gardens I’ve seen and the first of the grape pits I was to see thousands of later.

On again on some ancient old laid stone track for awhile as I struggled into the accursed headwind yet again.
I stopped for awhile in the Aloe Vera museum in Yaiza to get out of it and discovered thatChristopher Columbus said it was one of the four indispensable veg for wellbeing along with the grape the olive and wheat. It was also what sustained Gandhi during his long fasts.
I also found out that the lichen I’d been seeing aplenty was orchilla and had been a major earner as a source of a purple or violet dye, the colour of kings and bishops. And the cochineal beatle that supplied the valuable red dye breeds and lives on the prickly pear cactus and was introduced after the conquistadores saw it in Mexico.
The best quality in the world is still produced by hand here in a couple of villages.
Between Yaiza and Uga is a narrow path through the lava field that the camels who work in the natural park use.

It was from here that the parish priest of Yaiza watched and wrote about the huge eruption of Timanfaya in 1730 that spread all this lava about.
In Uga the information signs ran out temporarily 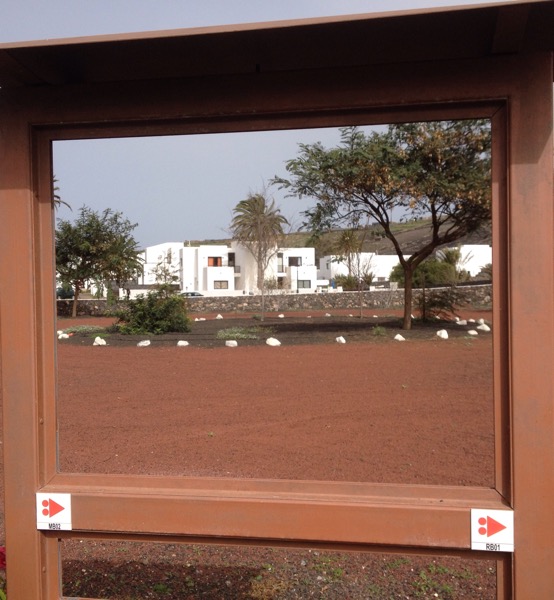 Before coming back in droves 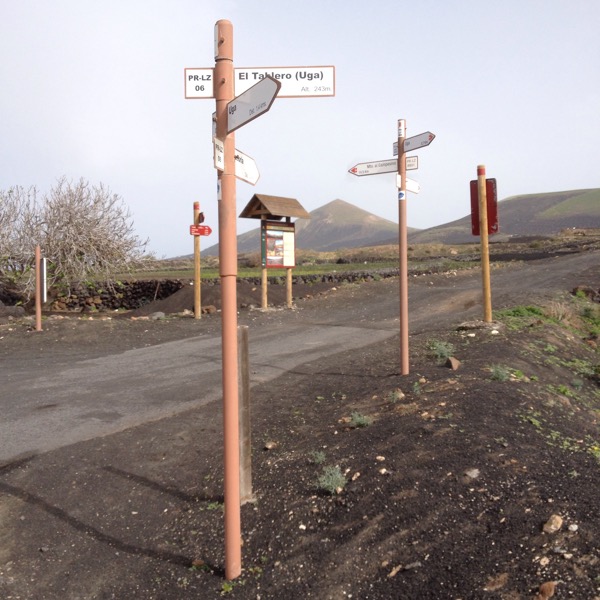 Then we were really up into the ashfields and grape pits

After seeing no one hiking the route on Fuerteventura this afternoon I passed 3 couples coming the other way. On and on up and up to the pass where I saw the gliders and chutes and it was nice to watch them.

But now I’ve been standing In a cold wind for too long to get a signal and I’m glad I have the tent to get warm in.