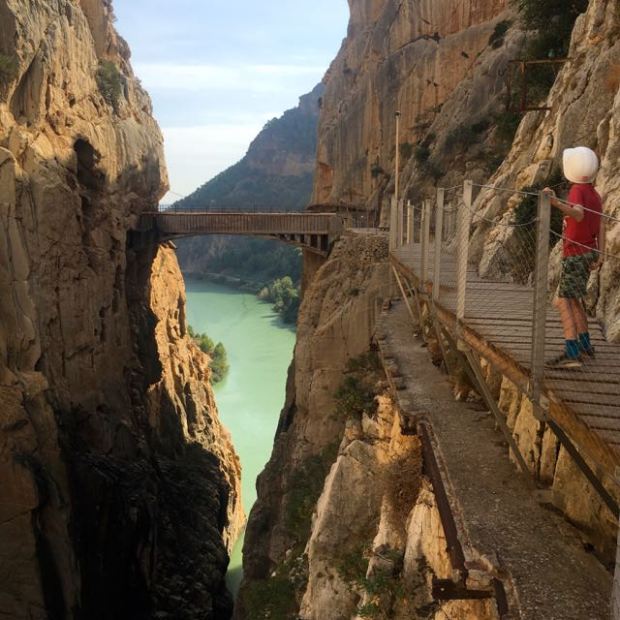 The somewhat dramatic title of this post, on a hike we did recently ,has been earned over the years by numerous people being killed whilst attempting to complete the original and badly crumbling walkway clinging to the side of a sheer cliff face 100m up above the waters tumbling through the Desfiladero de los Gaitanes gorge northwest of Malaga.

We had visited the area a couple of times over the years and seen climbers clambering about and watched videos posted on youtube by daredevils of themselves teetering on narrow and rusting steel beams supporting patches of crumbling concrete over the sheer drop but were never brave or foolhardy enough to attempt it ourselves.

Officially closed to the public in the 1980’s it continued to be a popular illicit attraction reached by crossing the iron girder railway bridge at the southern end while keeping a close eye out for trains emerging from the tunnels on either side. 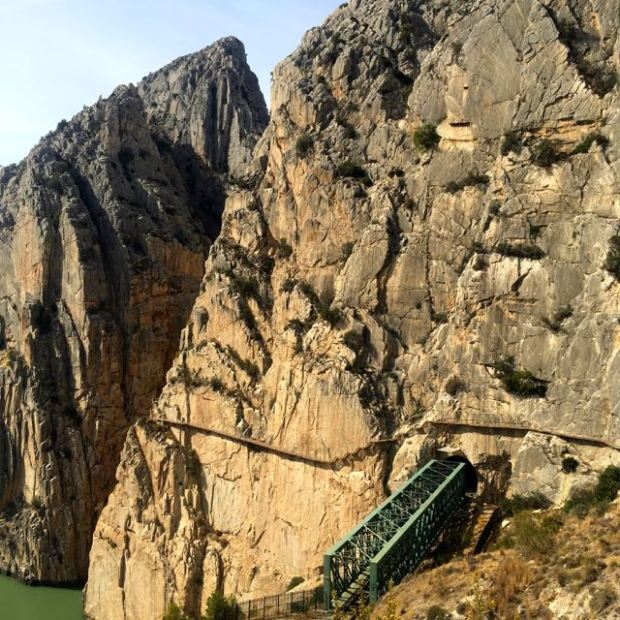 Following a string of fatalities around the millennium , 30m of the walkway were demolished  next to the bridge making access much harder. But still they came, and so plans were made to provide a safer, money making, route to satisfy the obvious demand and it was reopened last year after a €3million refit and we were keen to experience this magnificently engineered path under less nerve racking conditions.

Following the course of the Guadalhorce upstream from Spain’s southcoast the river has cut deeply through the limestone sierras as they rise up from the plains to the north, creating a ravine at some points only 10m wide and 300m deep.The last few km before the huge embalse or reservoir system forms the Garganta del Chorro, a staggeringly dramatic, jaw dropping sliver of a passage between the towering slabs of contorted rock.

The walkway was originally constructed over 7 years to 1912 to facilitate construction of a hydro electric scheme with much of the work being carried out by sailors hanging on to ropes suspended from the top of the gorge. The story is that the most dangerous tasks were saved for prisoners on life sentences with nothing to lose.

The area had already been witness to formidable engineering feats when 40 years earlier the railway from the interior of Spain had blasted tunnels through the sierras on route to the coast at Malaga. The line still serves passengers to Ronda, Seville and Granada and must be a very scenic ride.

It was during the construction of the railway that the idea of harnessing the 100m drop in altitude from one end of the gorge to the other for hydro power was first mooted and by 1921 when King Alfonso x111 used the walkway to inaugurate the completed dams (and so giving it the name ” The Kings Little Pathway”) the controlled waters of the Guadalhorce were producing the power for a burgeoning  Malaga. 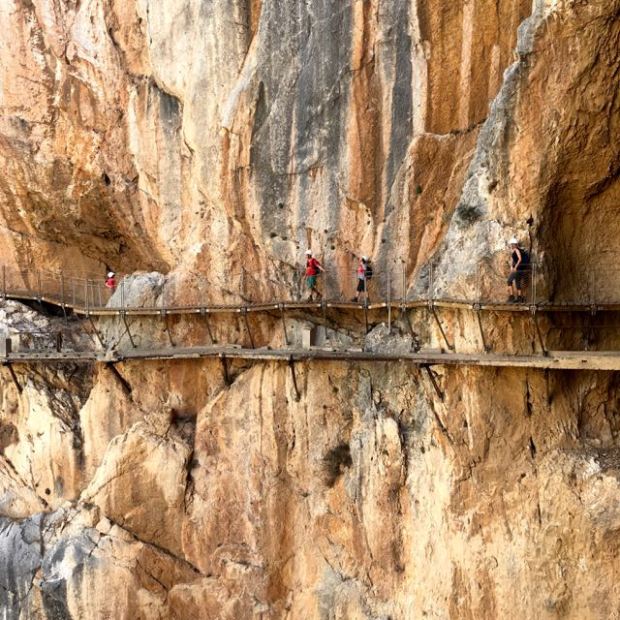 The old path, what’s left of it, has been retained and is just below the new walkway of wooden boarding on a galvanised steel framework anchored securely to the cliff face and with reassuringly sturdy cable and steel post railings.At the southern end a new steel suspension bridge with a metal mesh floor and another section with a thick glass floor allow an uninterupted view to the river below.

Initially the route could be tackled from either end but now can only be done in a southerly direction, presumably to ease the congestion of criss crossing groups on narrow or convoluted sections. Parking at El Kiosko bar and restaurant at the beginning of the 3km trail to the northern access gate we had a pleasant walk through the pine woods with the blue waters of the Embalse de Gaitanejo to our side.

As we approached the access point control we could see the gorge opening in the mountain ahead, and a large group of people milling about.The Caminito is popular and even on a September weekday, a year and a half after reopening, with groups leaving every 30 minutes,I was glad we had booked on line as our time slot, in fact the whole day, was sold out.

It was with surprise and relief that very soon after our group had been given our safety talk and helmets and been released into the wilds the majority raced ahead and out of sight and we were left to slowly stroll and marvel at our surroundings, with no time limit on our ramble. We were quickly immersed in the sandwich of rock faces.

Looking down over the wire railings to the river below revealed the sculptural power of the rushing waters with countless rock bowls turned over eons by their spiralling flow.

There were many bits and pieces of hardware left over from the original structure and many pegs, rings, cables and hand or footholds hammered like giant staples into the rock. 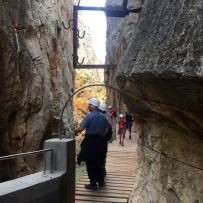 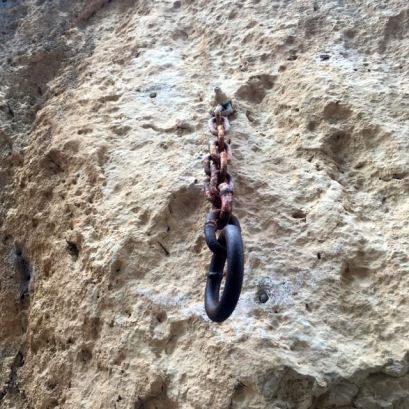 After a slow kilometre or so the narrow gorge began to open out ahead of us and the Hoyo valley came into view. 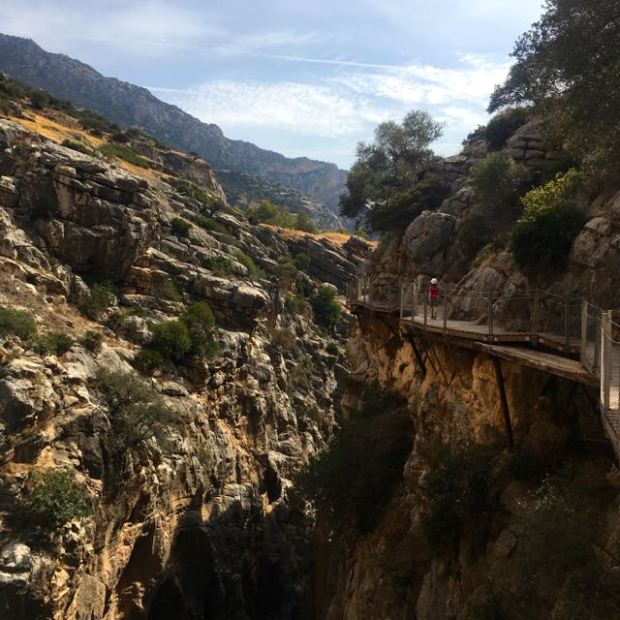 We passed by a couple of the maintenance guys working away on the end of a rope. The project must have created some good job opportunities for local climbers.

On the other side of the river the railway tunnel disappearing into the mountain came into view. Nowadays the new high speed Malaga-Madrid track has dug a route under Huma mountain, about 1km further east but the original line is still well used.

The valley widened before us and we stepped down off the boardwalk onto a trail through the wooded slope studded with Aleppo and Stone pines, Holm oak and Eucalyptuses. Juniper and Mediterranean Fan Palms also thrived in the parched and stony soil and the scent of brooms and rock roses wafted on the warm air. Down along the riverbank the moisture supported rushes, canes, oleanders and tamarisks.

Above us many vultures circled in a thermal of rising heat and there are often golden eagles and buzzards accompanying them. Below us an abandoned farmhouse commanded a fine situation looking over the land it once worked, isolated by it’s encircling sierra.

We continued for about a km on the level shady path, sometimes alongside the little canal that used to carry water to a turbine at Chorro, and sometimes in it, before scaling steps at the sluice gates. 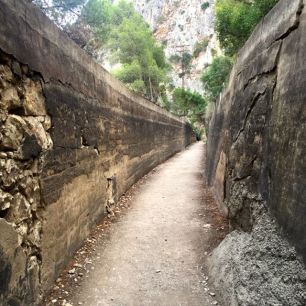 And then we were back to the boardwalk and approaching the massive bulk of limestone and dolomite whose sedimentary layers have been uplifted over millennia to now stand as vertical slices where fossils reveal their ancient origins.

We were getting to the most dramatic section of the Caminito, the last 500m, where the narrow walkway snakes around a series of acute bends,

crossing the suspension bridge,( where the sufferers of vertigo may have a hard time),

and following the curve of the sheer rock wall around to it’s southern face towering above the blue water where after a series of steps, we climbed over the steel girder railway bridge to the exit gate.

Our return bus was another few km walk alongside the reservoir from which water is pumped by windmills atop the mountain to a high altitude at times of excess energy, to be released back through turbines as the need arrises. The hydro scheme is clever engineering and the Caminto del Rey, both original and modern, was a thrilling walk built to enable its construction and appreciation. Long may it last.

If your looking for any information on how to visit the Caminito a useful english language website can be found by clicking  here.