It’s been 3 1/2 months since I left this trail to swelter in the heat of the Spanish summer and there has been precious little rambling since so I approached my return with a little caution, starting with what I thought would be a couple of easy days to ease my way into some kind of track fitness.
As soon as I stepped off the plane I realised that the heat was still going to be a problem. 11 o’clock at night and still 30 degrees and it was somewhere in the 30’s when I passed the thermometer sign we had sweated passed last trip.

Cap and shades on I set off through town and out onto the sandy track towards Tapia with as much water as I could carry.

Which was just as well as the bountiful Spring I had noted in the GR249 YouTube film was dry as a bone. Not that I could carry too much as I was travelling with minimal package. In a desperate bid to keep the weight on my back down as I had failed to reduce the weight of my front , I was planning a few nights camping without tent or sleeping bag just silk liner and mat. Even so, with some spare clothes, book, map, electronics, bit of food and my 2 lt water bladder my 25lt pack was bulging. 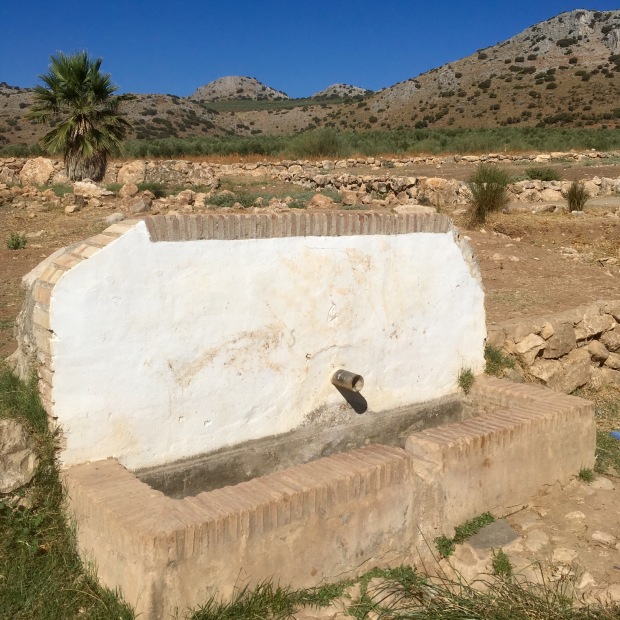 The landscape, thankfully, was gentle with only about 200m of ascent and descent to Tapia. The dusty track led me through a “Dehesa” of scattered holm oaks among the olives, almonds and grain fields. 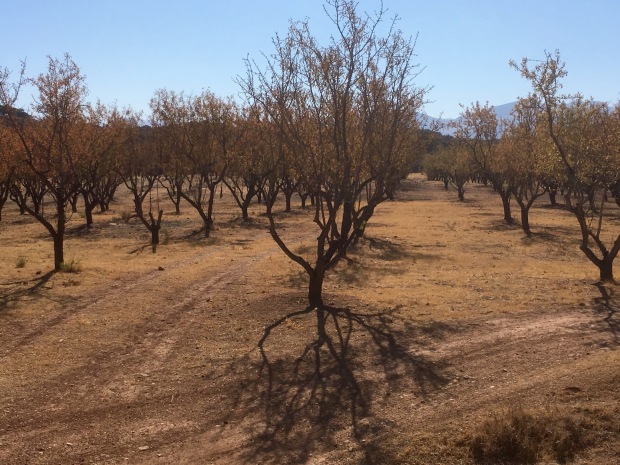 There were also more rabbits around than anywhere else I’d seen in Spain, evidently many had escaped the numerous cartridges scattered across the ground.
The route went under a railway and motorway in quick succession 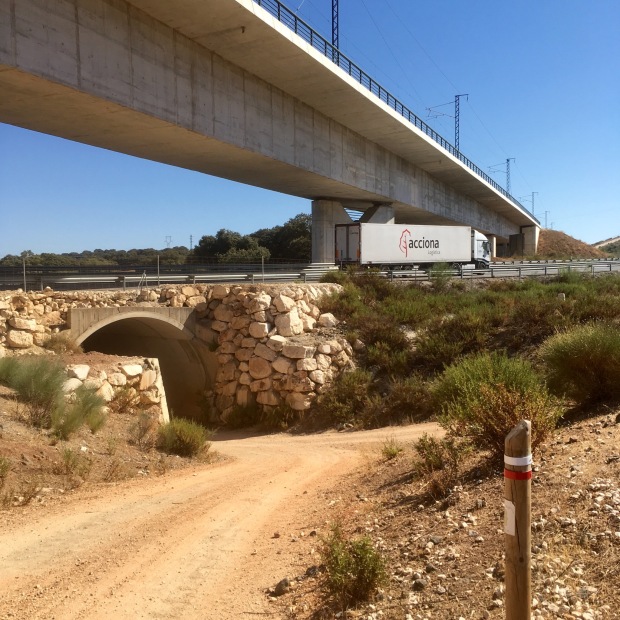 and soon after across another rail line empty of trains but busy with tractors.

The relatively flat open spaces means the farmers can employ big machines unusable on the rugged mountain slopes the GR had been though in its first dozen stages. Perhaps it was one that had flattened the rabbit that provided me with a “lucky” foot.

There is a long overlap with the E4-GR7 hereabouts, that, had I followed it, would had led me to Athens and beyond, but in this heat I was happy to stop at a lovely hotel rural for a cold drink but less happy to discover they didn’t serve lunch on Tuesday.

This threw the timing off a bit and after another weary couple of hours I arrived at Tapia just too late for lunch in the bar and a couple of hours too early for post siesta shop opening. A fountain in the park cooled my head and feet and I rested up. There was nowhere to stay here and I was going to have to head for the hills to find somewhere to lay my mat. 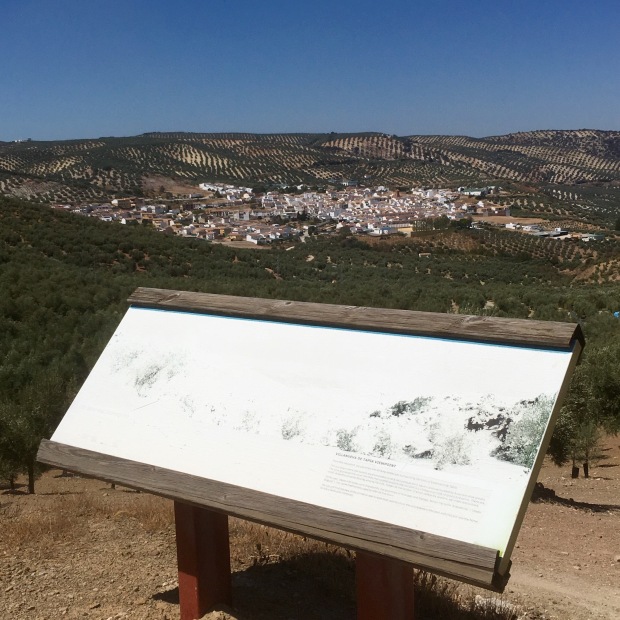 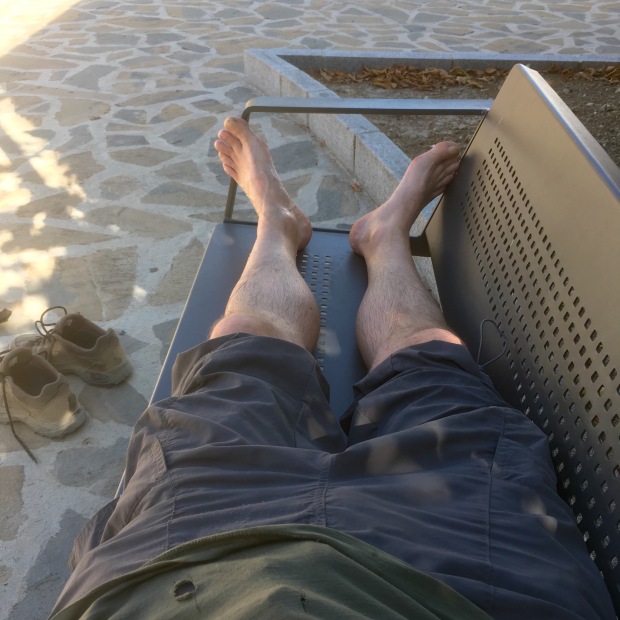 By the time I’d eaten and restocked with water etc it was 7 and thankfully a little cooler as I clambered up the steepest climb of the day for a few Kms getting increasingly apprehensive at the severe lack of camping opportunity. Steep and rocky, the abundance of ruined and deserted homes declared that this was not an easy place to live, or camp. 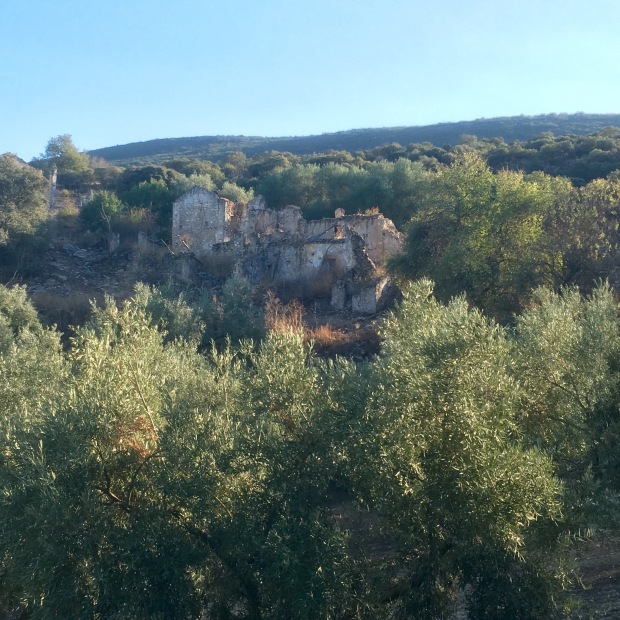 I was a little concerned about wild boar and mosquitos of which there seemed to be plenty.
But the late evening light on this ancient drovers track lent a magic to the land and as it finally faded I at last came to a ruin with an open barn and straw to lie on. With a full moon rising and mosquitos gone it was all I could wish for. 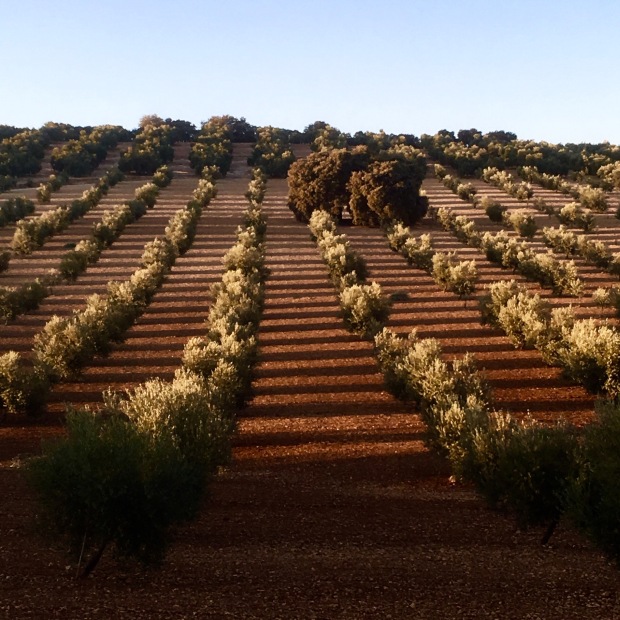 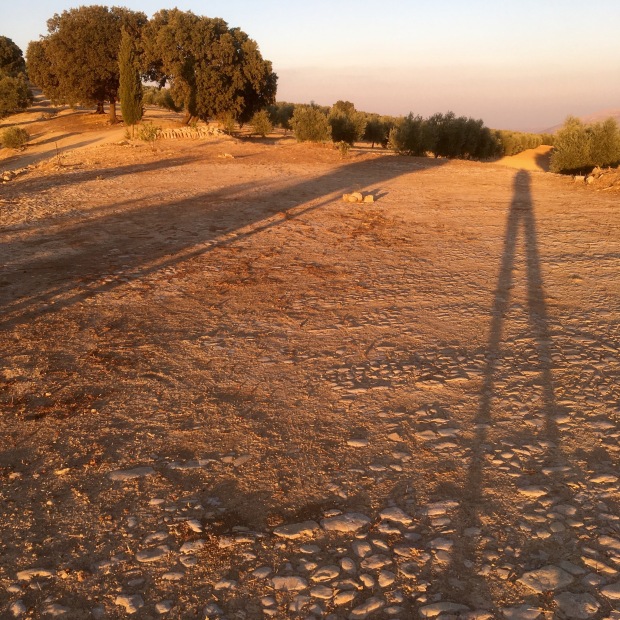 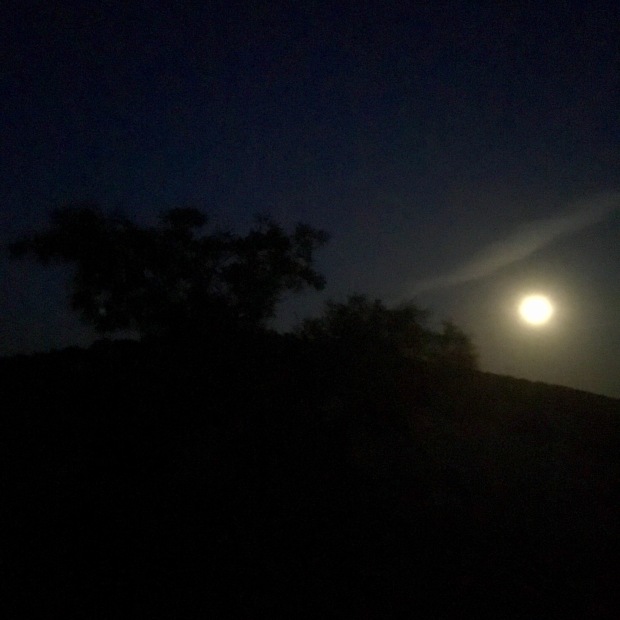 Next morning I was up by moonlight and on the trail in the gloaming, the olive groves slowly lit by the rising sun. The landscape I’d crossed 2 years ago on the Camino Mozarabe was ahead of me with the head shaped lovers leap and the mountains of El Torcal behind. 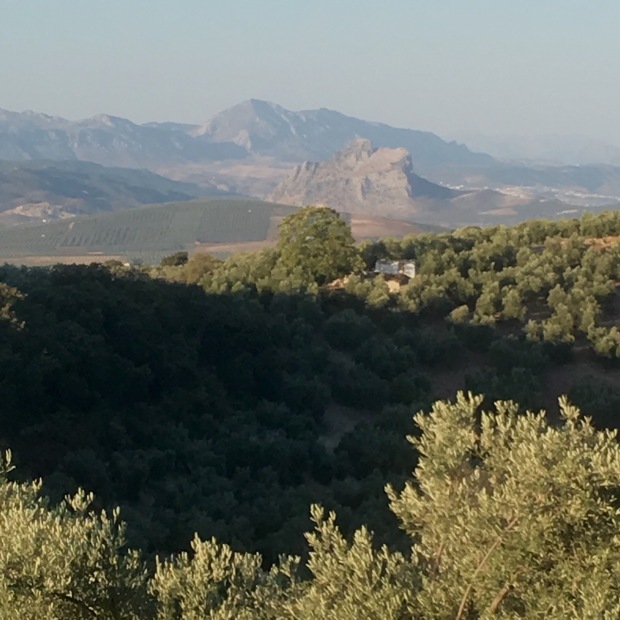 There were well kept farms here with a variety of fruit and vegetables hidden away amongst the vast olive groves. One little finca had the least effective guard dog I’ve ever seen. Unlike most in Spain there was no yapping or growling and leaping up and down. This poor fellow couldn’t do enough to hide away in an attempt to avoid all contact. 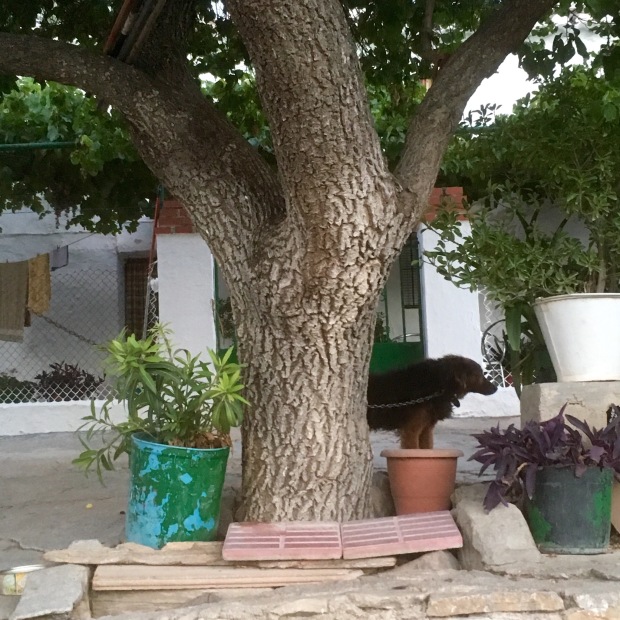 They seemed very “grove proud” in these parts with men and machine watering, feeding, clearing and flattening(!) their fincas. I’d never seen anyone with a leaf blower tidying up around their olive trees before. And why do they need it so flat?

Eventually my path descended down to a stream bed, passed a ruined mill, and across a lot of the detritus of past flooding.

I came into Algaidas past the vast olive mill, idle for the moment but awaiting a storm in a few months.

Stopping for a cafe con leche I google mapped my Air b+b but upon arrival the mailbox was for different names. A very friendly policia local knew exactly who I was looking for and directed me to a village a couple of km further. The route out there was on the Camino Mozarabe and brought back memories of the shady path and bridge, although it looked like there had been some raging waters here too. 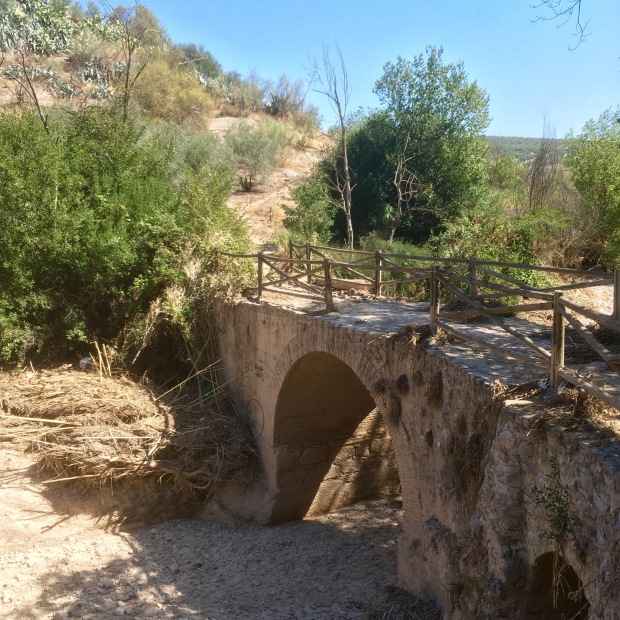 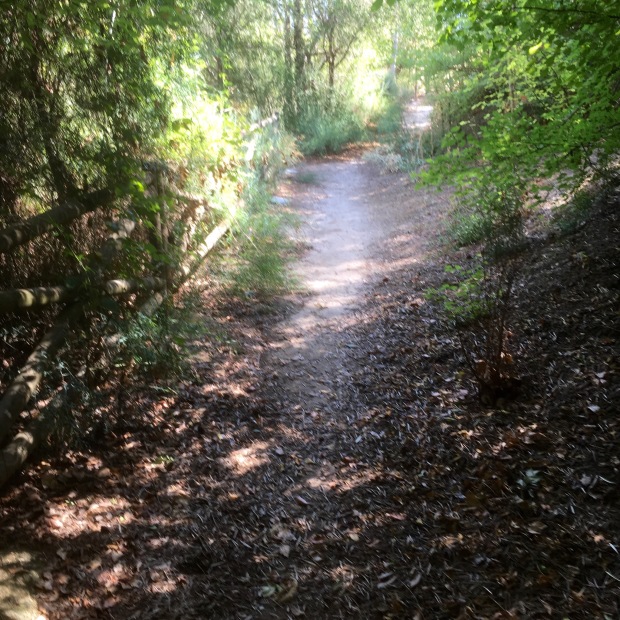 There is a whole load of new signage for the Camino and I saw that it has been given the GR designation. 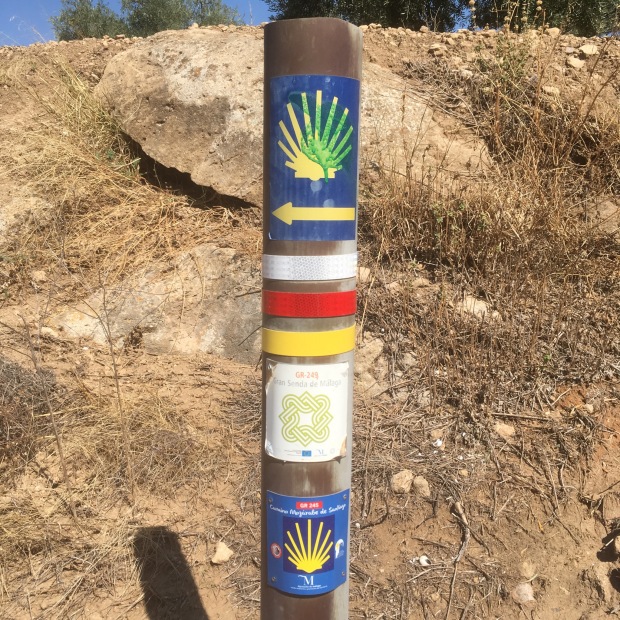 And so I will miss out on the next stage of the GR249 to Cuevas Bajas as we did it on the Mozarabe and continue on to Alameda. Hopefully a good rest and an early start will allow me to climb the initial 250m without heatstroke.