It was my birthday so I allowed myself the luxury of the buffet breakfast, putting down energy stores for the day. I had to retrace my steps for the first 4 km or so, something that had prompted me to stash all my camping gear at the beginning of the overlap on the way in.
My fingers were crossed that it was still there and hadn’t got wet.
I passed, again, what I thought was an ancient quarry and continued up the sandy trail above a deep and steep ravine.

I was glad to find my stuff still there, disappointed to have to add all those kilos, but turning onto the new path it flattened out and led me through replanted pines above more quarries. 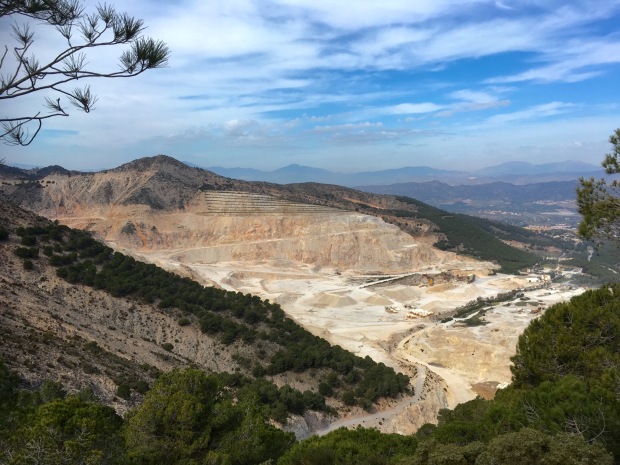 I skirted around the peak that a cable car serves and carried on eastwards through low shrub across a limestone plateau. I was joined on the track by a group of kids and a few adults in camo gear that were obviously staying at the albuergue way up here. A little further there was a simpler refugio. 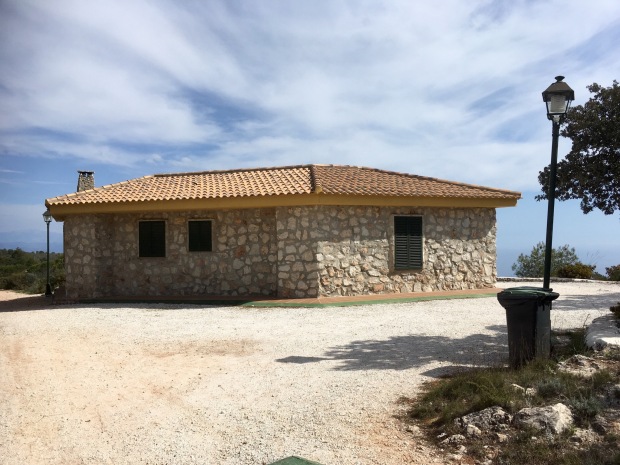 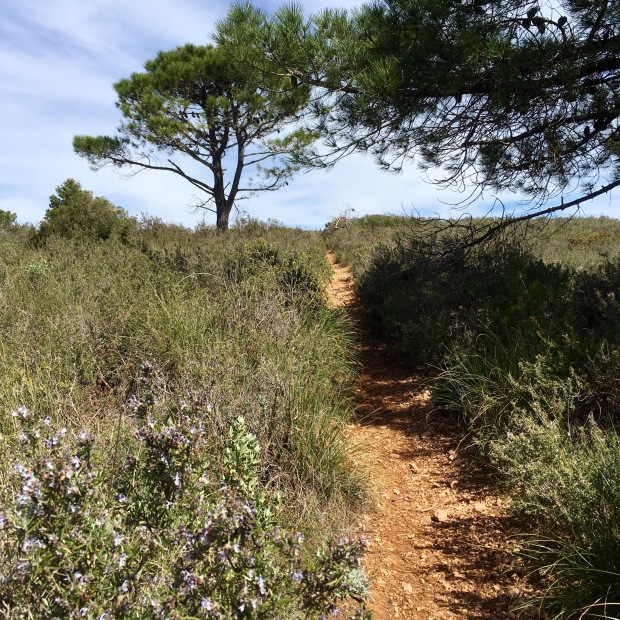 All of this limestone had provided the materials for long thick walls running all over the place. This now abandoned land had been stock proofed at some stage.

And then below me, over a cliff edge I could see Alhaurin and it was time to descend from the hills for the final time. I felt a little sad to be rejoining the urban environment but had a nice route down on a narrow trail between the cliffs and into pine woods thick with creepers.

After being in the relative wilds for awhile I was sensitive to the sights of the border between natural and man made worlds.

Setting off on the last leg of the Senda de Malaga in the morning I was still musing on our disassociation from the natural world and could see symbols everywhere for our hurried lives blinkered from the reality of our damaged connection to it. 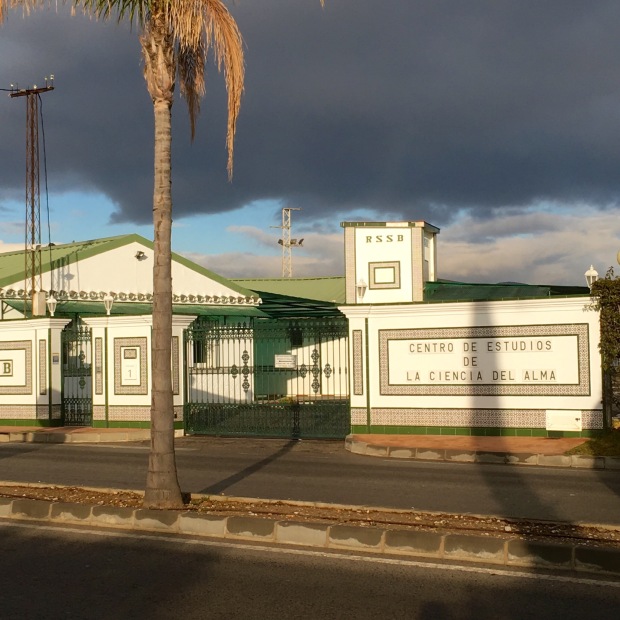 And all of this before I got to the start of the final stage. My last signboard left me struggling to find the right way, through the crop area that left me very grateful I’m able to consume mainly organically grown food. The toxic smell from the milky waters was intense.

Leaving the men to harvest the artichokes I passed under the motorway and around the perimeter of the airport. 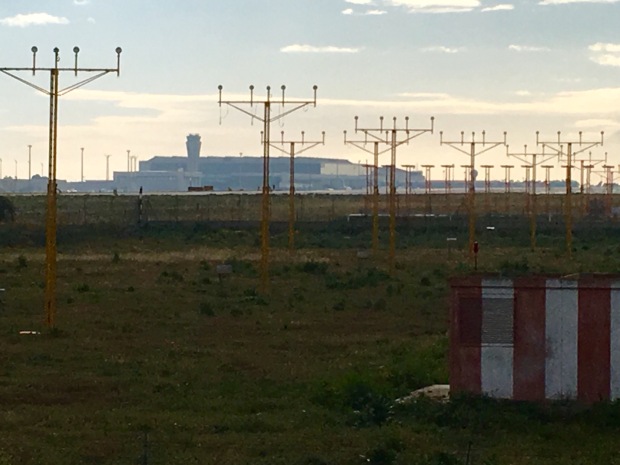 I thought maybe I should leave this out but it’s all part of the GR249 and the strong contrast of surroundings shows the importance of keeping the good stuff good. 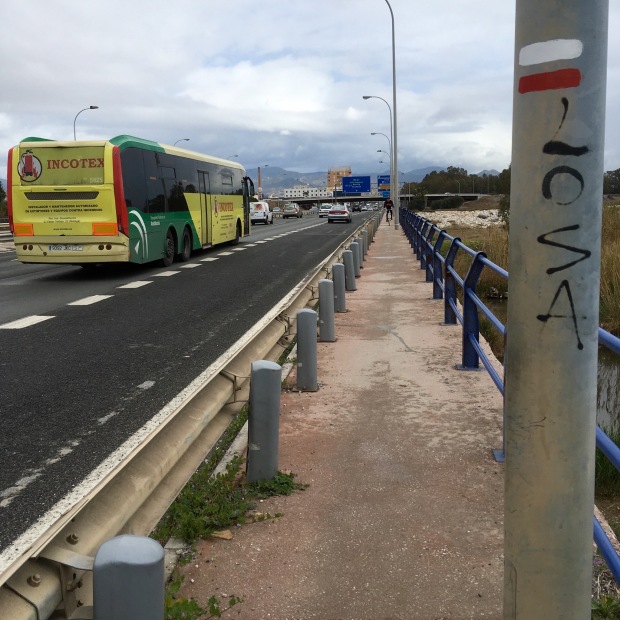 The waters had changed from milky to green as it struggled to reach the sea. 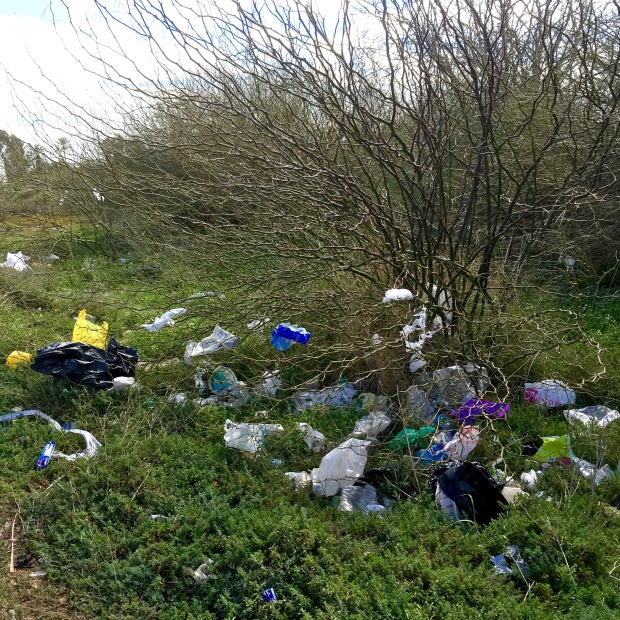 And finally back to the seafront I started at a year ago. I was received by the environment department of the council and awarded my diploma. They were very nice and are doing good and difficult work.

That was it. Relief I’d managed to complete the route coupled with a slight sense of deflation that it was over. It’s a marvellous route around a truly beautiful province.
There is so much more to Malaga than the Costa.