My tent is up for the first time this trip. So far I’ve just been in the bivvy bag but it could be windy or drizzly tonight so thought I’d risk it ( it’s technically illegal ) 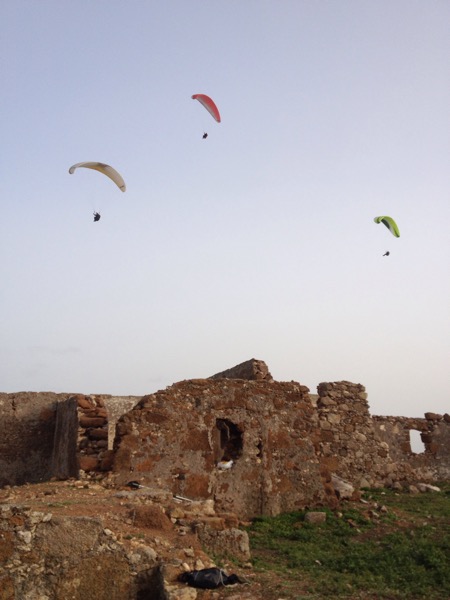 I’m up here with the parascenders and the hangliders on the slopes of Montana Tinasoria about 10km past the end of the 1st stage in Yaiza.
I was glad to get out of Playa Blanca although if I’d made it to the kariokie it seems I would never had wanted to.

but soon enough I was on the trail proper through the recently marked and signed lava fields. The day was dull and cloudy and the black ash fields did little to brighten it.

I could see over to the west coast as I picked my way carefully over the rocks. With my hiking poles probing and searching for solid ground and balance I felt like some kind of insect with twitching feelers.
Up past a goat farm into Brena which had the best cactus gardens I’ve seen and the first of the grape pits I was to see thousands of later.

On again on some ancient old laid stone track for awhile as I struggled into the accursed headwind yet again.
I stopped for awhile in the Aloe Vera museum in Yaiza to get out of it and discovered thatChristopher Columbus said it was one of the four indispensable veg for wellbeing along with the grape the olive and wheat. It was also what sustained Gandhi during his long fasts.
I also found out that the lichen I’d been seeing aplenty was orchilla and had been a major earner as a source of a purple or violet dye, the colour of kings and bishops. And the cochineal beatle that supplied the valuable red dye breeds and lives on the prickly pear cactus and was introduced after the conquistadores saw it in Mexico.
The best quality in the world is still produced by hand here in a couple of villages.
Between Yaiza and Uga is a narrow path through the lava field that the camels who work in the natural park use.

It was from here that the parish priest of Yaiza watched and wrote about the huge eruption of Timanfaya in 1730 that spread all this lava about.
In Uga the information signs ran out temporarily

Before coming back in droves

Then we were really up into the ashfields and grape pits 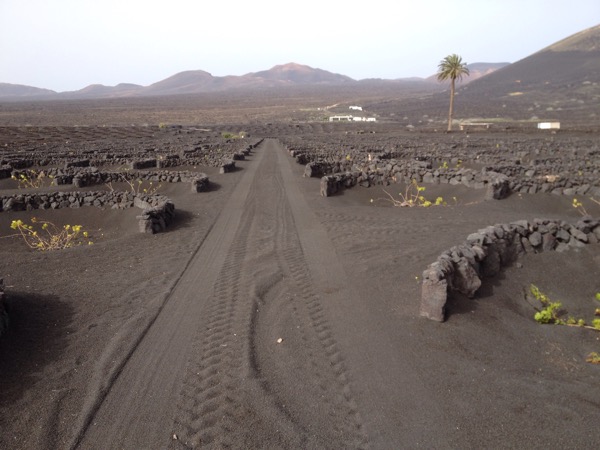 After seeing no one hiking the route on Fuerteventura this afternoon I passed 3 couples coming the other way. On and on up and up to the pass where I saw the gliders and chutes and it was nice to watch them.

But now I’ve been standing In a cold wind for too long to get a signal and I’m glad I have the tent to get warm in.