Today was a long(28km) day but a good one. I learnt somethings about the settlers on the land , both historical and recent.
I left the shelter where the table displayed the graffiti of “Misty Mountain Man who had walked all the islands in Jan 2012, and carried on across the stony plain as the sun rose behind the mountains to the east.
On the outskirts of Tefia I came upon an intact old windmill.

A sign told me about the reservoir made here in 1946, the biggest on the island, when they also brought in 30 families to la parcelas. Each family was given a house, 2hectares of land, water rights and some money for farm machinery. They mostly grew cereals but also veg and alfalfa and corn for animal fodder. I don’t know if it was drought or the lure of the city but nearly all left in the 50s and 60s for the capital or Gran Canaria.
A little further on was the Ecomuseum, something like Bunratty folk park, but these looked like restored original houses of the parcels colony. The land around the buildings displayed the old wells and reservoirs, clay topped haystacks, eras, the circular threshing floors and many other facets of husbandry that you probably don’t want to know about. I’ve got a thing about old style husbandry. 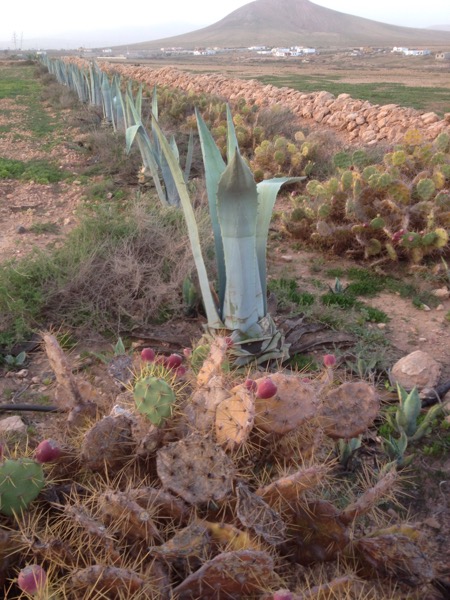 On through Tefia where I had been hoping to get water for the days walk but the restaurant mentioned in my guide was shut and for sale. Now you can’t always get what you want, but if you try sometimes, you just might find, you get what you need.
So, carrying on a couple of km I find the Happy Plant Nursery with a stranded ship of the desert outside.

I called in to ask for water and following voices past beautiful flowers and plants in a dazzling array of colours after all the mute sand I found the owners in a big shaded growing area. Originally from Wales, they had set up about 15 years ago. We had a good long chat about many things husbandry related and I realised it wasn’t just water I needed. I hadn’t had a conversation for a week.

After perhaps another 6 or 7 kms and a long gradual climb I found what Paddy Dillon describes as a “curious dwelling”.
Or rather a collection of structures with lots of covered spaces and shading. I stopped for a drink and snack and a lady with an English accent asked if I was ok. So we had a chat (I’m getting giddy by this stage). German couple living there making art and wine. She told me that there had been a lot of rain in December. Full of talk I hiked on to Tindaya with its sacred mountain and yoga centre.

I think it looks a little like Ireland’s sacred mountain Croagh Patrick.
I stopped here for cafe and tortilla in Diana’s cafe and what do you know….pictures of the lady Di on the walls and Andrew Mortons biog on display.
On to la Olivia where the smart southern suburbs had designer villas that kept their trees warm in fashion. 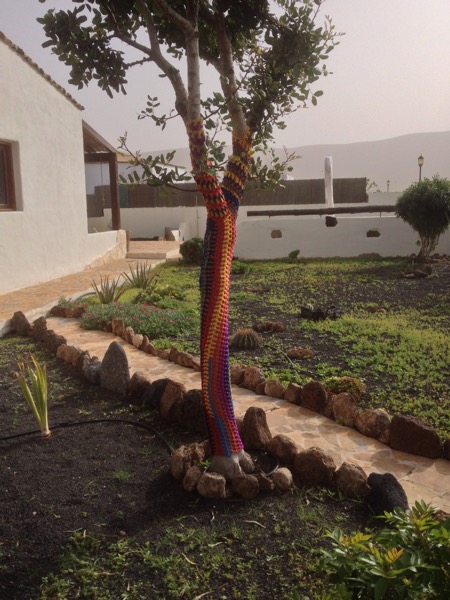 Into town, meal in bar with cards and football and shouting men then out through the less well off area with cars on blocks and broken windows.
The road turned to track that made its way into the islands most recent lava field ,10,000 years old. A chaotic jumble of moss and lichen covered rock in many places dug out and planted with prickly pear. 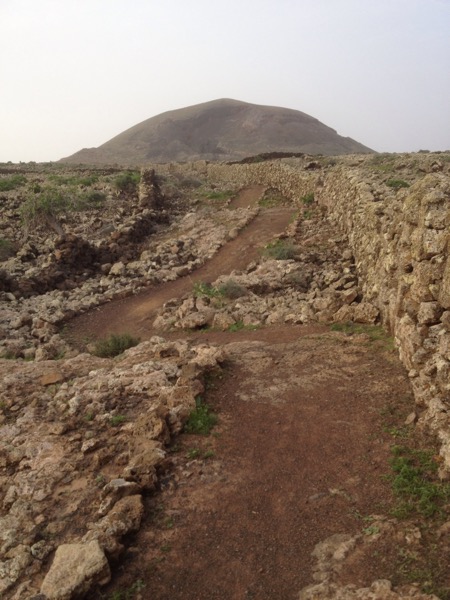 As I gained height and left civilisation behind I came upon more signs of blow in colonies. Finished and unfinished home build projects, caravans and trucks, veggy plots and a young couple with a child on pony back.
Good luck to them all I say as I make myself at home in what I’m assured is the last trail shelter.