Stony ground was my bed last night and rock was my pillow too.
A morning wasted trying to sort out why I had no phone credit or cellular data allowance. I had to go to the very up market Parador hotel who let me use their internet and after hours of frustration was able to get communication going again.
So I didn’t head off from Cruz de Tejeda until nearly midday with a white mist around and a red mist of anger within.
But as the external cloud rose and dissipated so did the internal and I settled down to enjoy the unfolding views.

</a
As usual there was a steep climb to start with, back up above the lingering cloud with great panoramas opening up to the west and the Roque Nublo. I climbed through now dry pine woods and crossed mountainsides scattered with abandoned fincas any one of which would be a handsome addition to my remote property portfolio.
Gran Canaria is the only Canary Island which hasn't adopted the signage for the GR131 and at times it was confusing as the path numbers seemed to change frequently.

I kept bumping into hikers some of them repeatedly as they tried to find their trail amongst the mass of signage.
After a disappointment at Llanos de Garanon where I discovered my hoped for bar restaurant was closed I headed on over yet another high pass to new vistas.

A bare rock path across the ancient volcanic rock led me towards a sublime walking experience.

After reaching an altitude of about 1700 mt I started to go down the most beautifully constructed path it has ever been my pleasure and privilege to have contact with. My phone camera could not possibly do it justice as its scale was overwhelming. It wound its cobbled way down and around the sheer face of the mountain like a scaly clinging snake and brought joy and respect for the artistry and engineering craftsmanship of the souls who had constructed it. 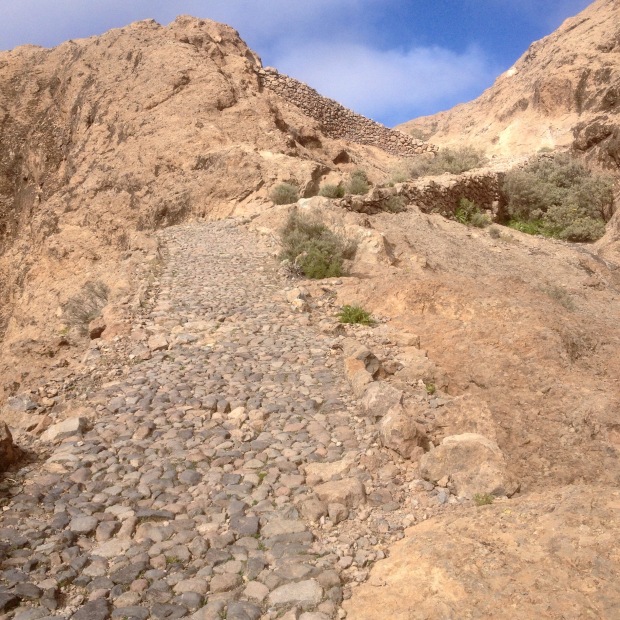 When I passed some resting hikers I had to share my passionate feelings towards the pieces of stone we were walking on. They weren’t alarmed and seemed to agree.
Under the cliffs and down across a ridge we went but sadly the original construction team had done their bit and it became rough and ready. The plant life made up for the lack of human achievement.

Eventually I came down to a road and then a modern version of the sublime trail above. No buttressing needed a simple downward path but paved with stone into the village of San Bartolome where I needed some water and food. 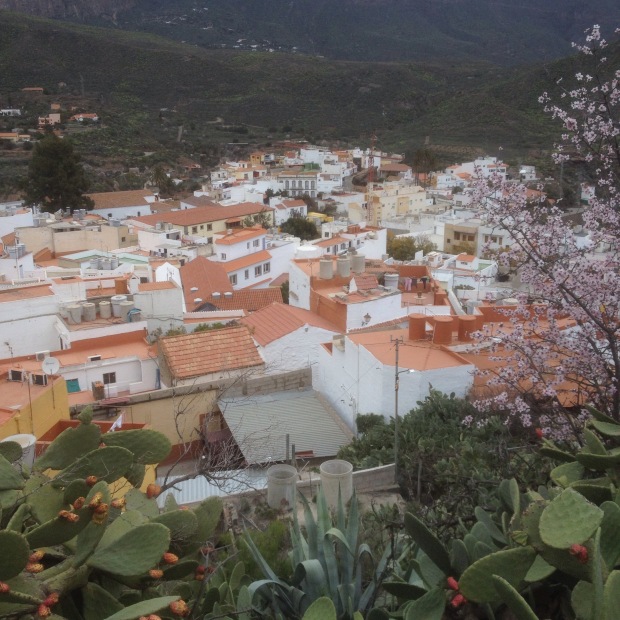 Unfortunately this meant a steep descent into the heart of the village and an equally steep return before i could be on my way again. This was supposed to be the end of the days stage but I had planned to travel on and find somewhere to camp. I hadn’t planned to start at 12 o’clock though so leaving at 6 didn’t give me long before darkness crept in.
Out on a dirt track leading passed fincas with savage barking dogs and then up an increasingly steep and rugged trail with no possibility of camping anywhere to be seen.
It got steeper and more rugged and the surrounding cliffs became taller and more ominous with rockfalls and land slides everywhere. It looked like the only place I could sleep was on the track itself but the rockfalls put me off that. There were a couple of big overhangs I could have crawled into but I had a fear of a million tons of mountain crushing me in the night so I staggered on and on up and up as the darkness increased. I had to zig zag up a seemingly endless stretch of lumpy bumpy track to reach the Coll and flat ground at last. I found a little niche of shelter just before darkness closed in and with a weary eye on the cloud hovering just above called it a day.