A hot Sunday on our last day on Germany. I could see the benefits of a stay on a campsite when the bread and cake van came round. We did our best to blend in for a while 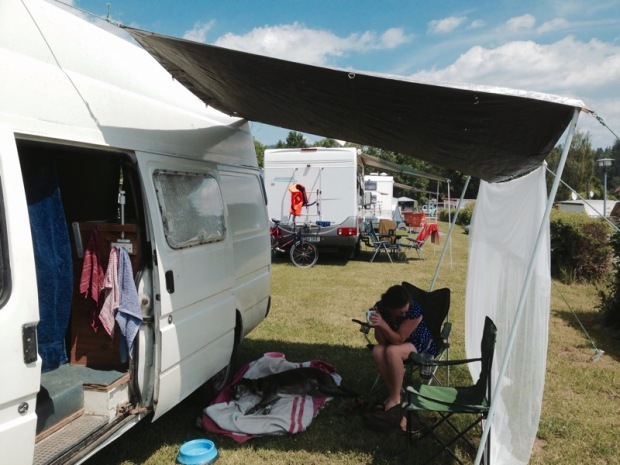 and then it was time to get going.  We had asked Serena to direct us to Czech without going on the motorway as we had not got a vignette, a toll card, so we had a lovely back road drive across open high country to the border past windmills and solar farms and a biomass plant. All very green.  Wild camping and park ups are apparently illegal in Czech so soon after the border we headed for a campsite near the spa town of Frantiskovy Lazne. Greeted by a very friendly lady who dug deep to revive her 30 yr old school English lessons we were given free rein to park where we liked in the small laid back camp. The grassy field was being smothered in poplar fluff.

We went on a walk around and a meal at the nearby lakeside restaurant where everyone was friendly and the whole vibe seemed more relaxed and funky than East Germany with a LOT of young hip looking folk about. And they love their trees.

Next day it was time to explore the town, one of the pillars of the west bohemian spa triangle. With 23 different mineral springs with very high iron, salt, co2, and other stuff it was a hugely popular place at the turn of the 20th century and it’s fine architecture was surrounded by landscaped parklands that spread the 2 km to the camp along tree lined avenues. 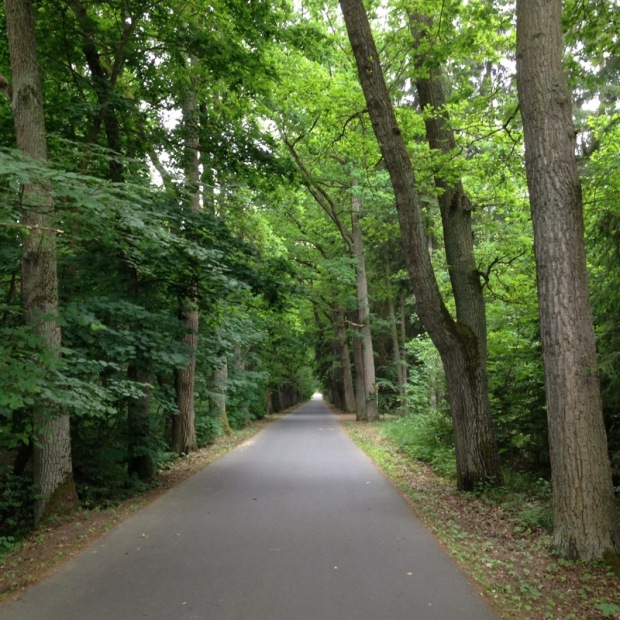 We tried a lot of the waters, and most were pretty vile but came in nice wrappings. 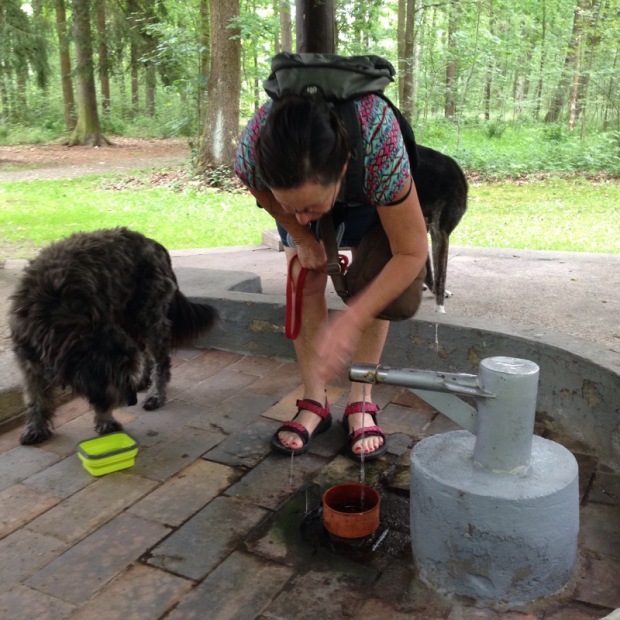 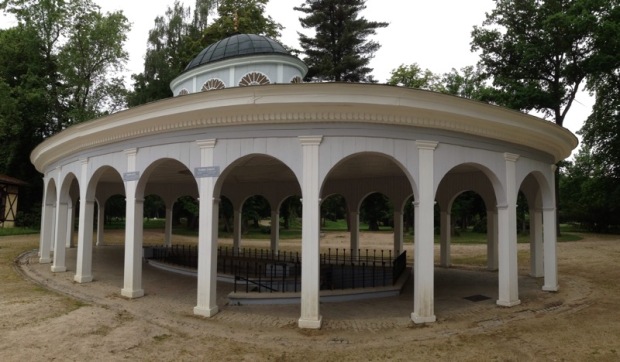 In the afternoon we headed to a reserve nearby where across the 100’s of acres of moor and wetlands there were many mineral spring sources and a large quantity of pure carbon dioxide comes to the surface in mud volcanos.

There was a boardwalk across the strange landscape that had beautiful patches of sulphur coloured ground. 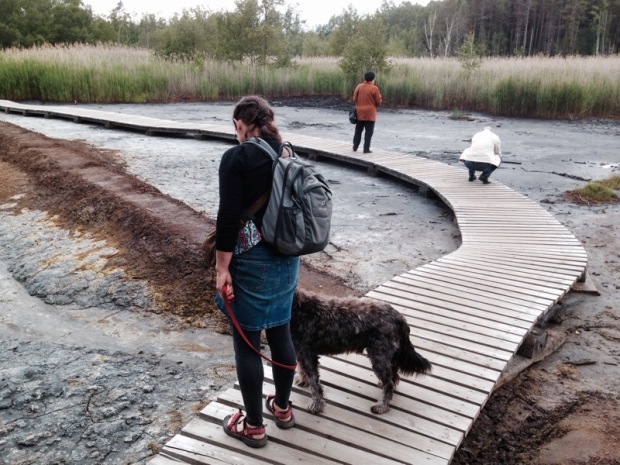 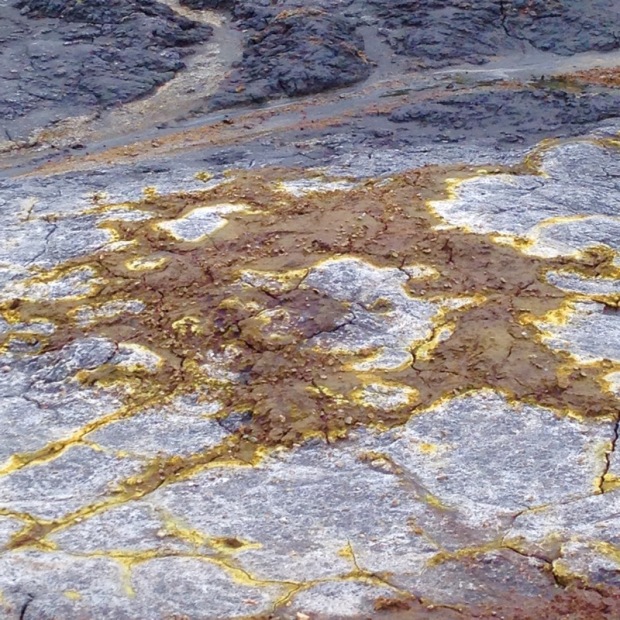 There was another area of Bohemia I wanted to explore above the spa town of Karlovy Vary. The Krusne mountains have been mined for tin, iron , copper, zinc since the 16th century and when uranium was discovered there in the 1950’s the Soviets brought 15000 mostly political prisoners in to toil below ground extracting it for Russian nuclear experiments.  On our way there we past a huge area of open cast mining where the planet had been stripped away.

. We found our way, well Serena did, to a lovely pension with a small field of cabins to park in up in the woods below the mountains. The friendly owner of Pod Lanovkou charged us a couple of euros to use the showers and toilets but nothing to park up.

In the morning we did a 18km hike up to the top of Klinovec the highest peak at 1224m. The way went through forest with abandoned ski lifts and runs and across meadows thick with wild flowers.

We stopped for a coffee in the highest town in Central Europe,Bozi Dar which was a nice looking ski walking and biking centre. 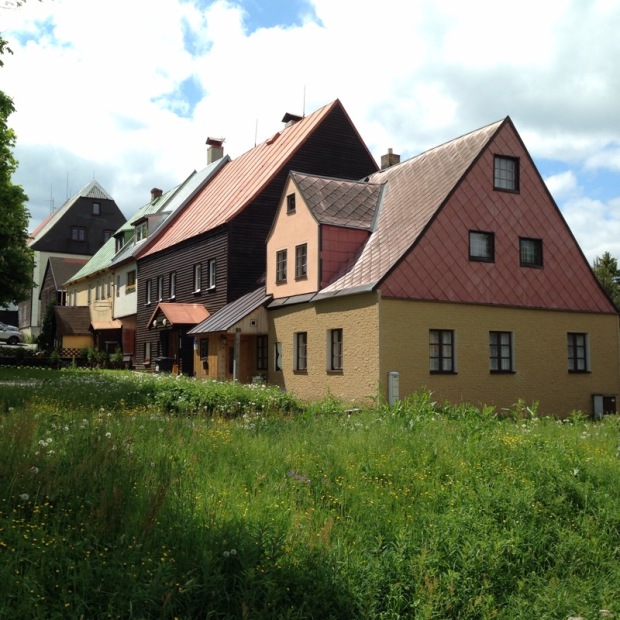 For what is the second most irreligious country in the world they have many fine churches.

Then up to the top with more ski lifts, flower meadows with views and a summit abandoned hotel.

On our way down we passed a gang of dark skinned workers making a new trail through the forest.

And after a steep scramble made it back to camp where the owner told me that this very site had been a uranium mining work camp and pointed out the mine entrance and buildings. We had been hiking over the top of the tunnels. 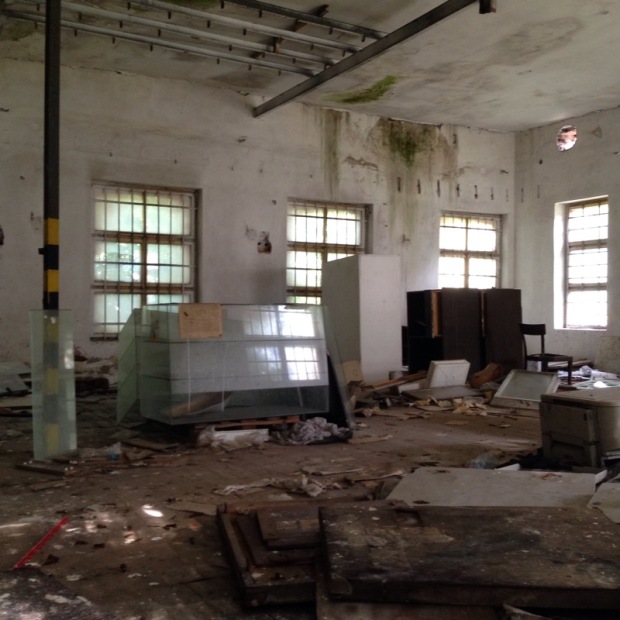 Tomorrow we will explore more of the “Jachymov Hell Trail”