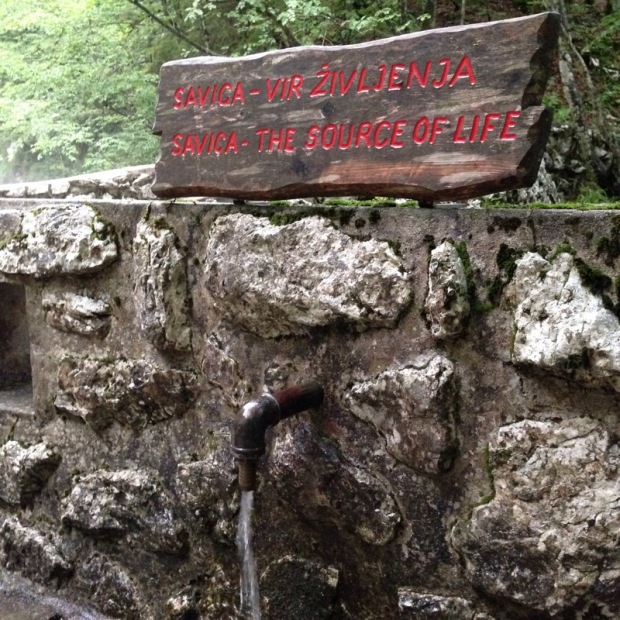 At the end of the lake, high up on the 1300m wall of limestone that curves around us ,is the waterfall that feeds it. Called Savica, it has been a source of inspiration to poets and artists over centuries and is probably the most famous in the country. We headed up for a look.

On route we found out we were heading in the direction of home. Although the falls are at 900m, that still left a lot of cliff we were planning on climbing the next day so we eyed them up warily. 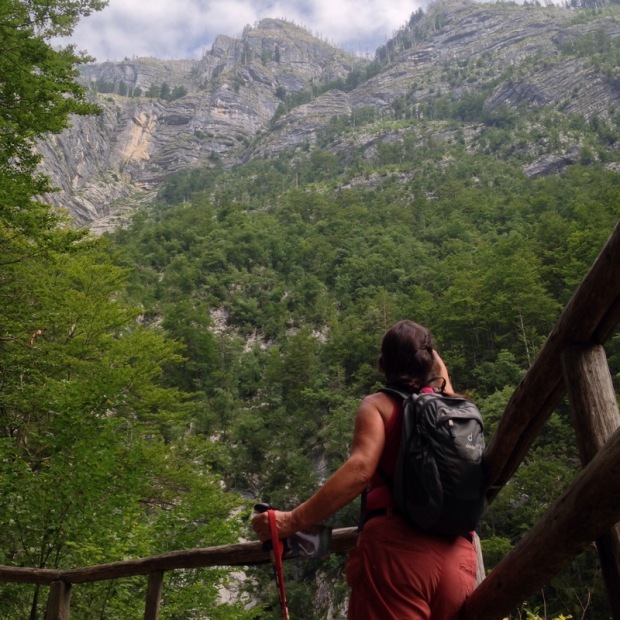 when they built the countries first hydroelectric power plant. The clean green Slovens are pleased to report that todate it has saved the burning of 1.2 million tonnes of coal, enough to fill 600,000 wagons stretching from here to Stockholm. Bet you didn’t know that.

The waters were far more impressive before they enter the pipe.

There was a plaque in the observation tower commemorating a visit by Archduke John of Austria that had lots of the same carefully carved antique graffiti we had seen in Hungary.

On our way back down through the limestone boulders and beech trees I started to collect images of stone-trees or tree-stones. 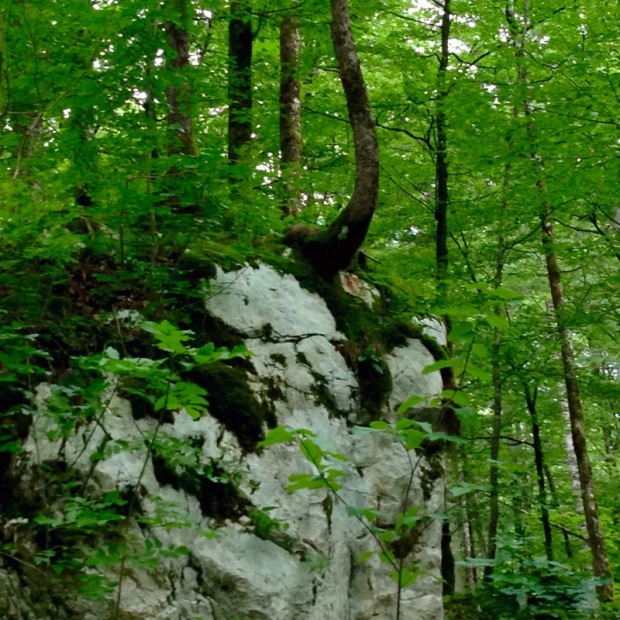 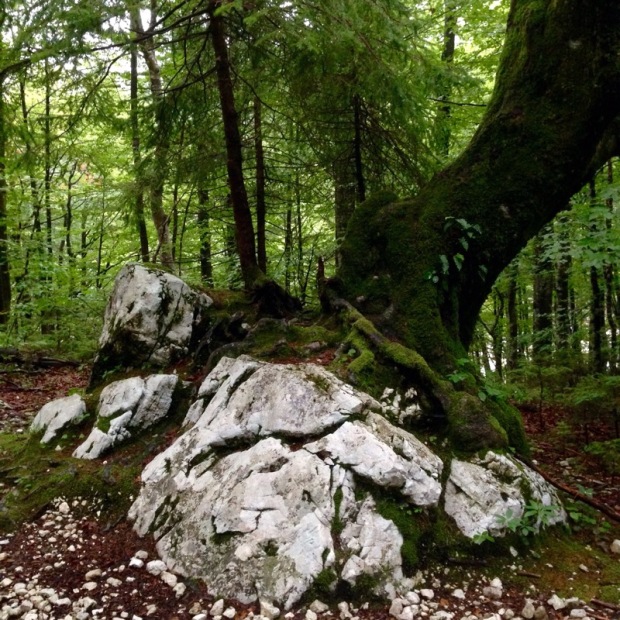 The mountains called again, and we must go. Up into the central range of the Julian Alps, towards the peak held almost sacred to Solvenians, Triglav. This towering lump of limestone is something that every citizen is supposed to scale in their life and they seem to take it as seriously as the Irish would Croagh Patrick.

There is a network of huts across the high mountains that accommodate those wanting to climb and hike for days on end without coming down. Strategically placed 3 or so hours apart on prominent peaks or junctions of trails they offer bed, board and warmth. Across the Julian Alps there are about 50 of them, called mountain huts but often huge affairs with beds for up to 300 people, proving how popular trekking in the mountains is here. There are also about a dozen unmanned bivouacs with space for between 2 and 10 in case someone got caught out.

Run by the Alpine Association of Slovenia, who also manage the trails, they have a policy of not turning anyone away and will find floor space somewhere for those in need. Which is just as well as camping is prohibited in the park and conditions can be inhospitable to say the least.

They weren’t that great when we headed up a long 2 1/2hr zig zag track to scale the wall of Komarca. There was a shorter, more direct route up, but it involved chains and ladders that the dogs couldn’t handle so we had a relatively easy hike up through the forest above the waterfall. In the last couple of decades the area has suffered fire, earthquake and devastating winds and we saw plenty of trees down.

although there are also lots of Christian shrines as well

This one was at Dom an Komni, the hut we came to eventually a little wet, hungry and cold. There had been a serious drop in temperature. From 36 degrees at the lake the day before to 6 degrees up there in the cloud. So we were glad to warm ourselves up with coffee and ham and eggs and didn’t object to the inflated prices they charge to cover the cost of getting the stuff up there to 1500m. Actually the prices are fine. A pint gets more expensive the higher you go but still ranges from 2.50€ to 4€.

The cloud have lifted for awhile when we came out and we could see where we had come from for the first time. 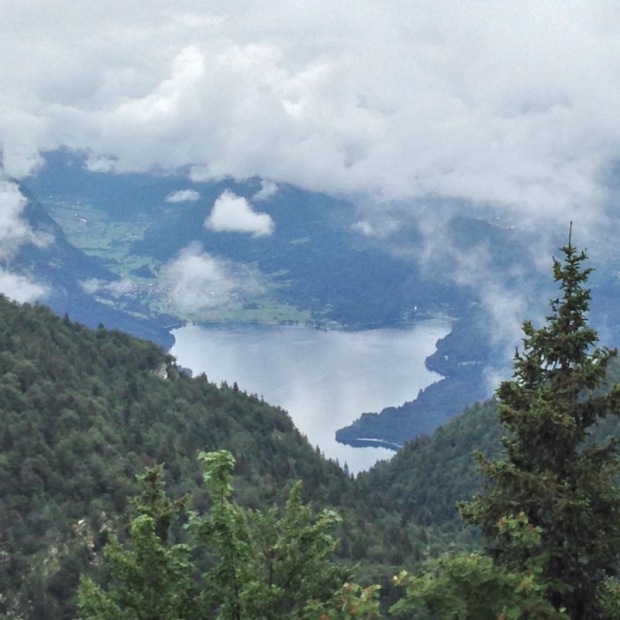 We carried on up another couple of hundred meters over the next 3 hours through a misty soft day that at times was very like a walk in the burren with more flowers. 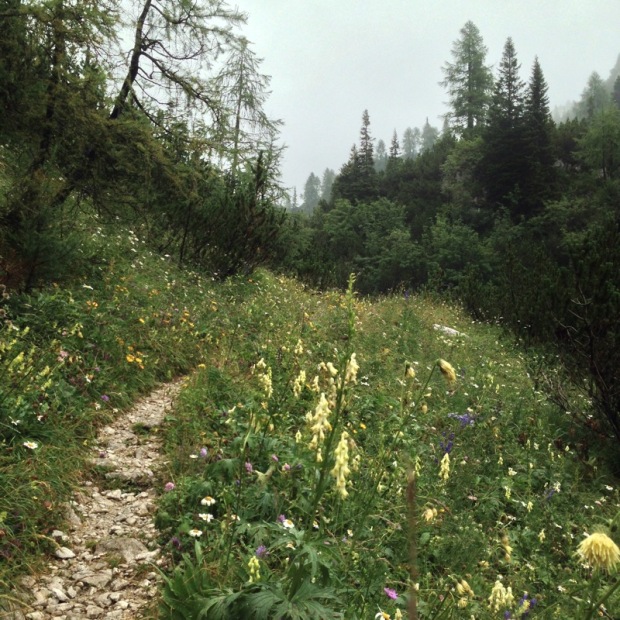 We passed some lovely wooden water troughs which are a feature here. 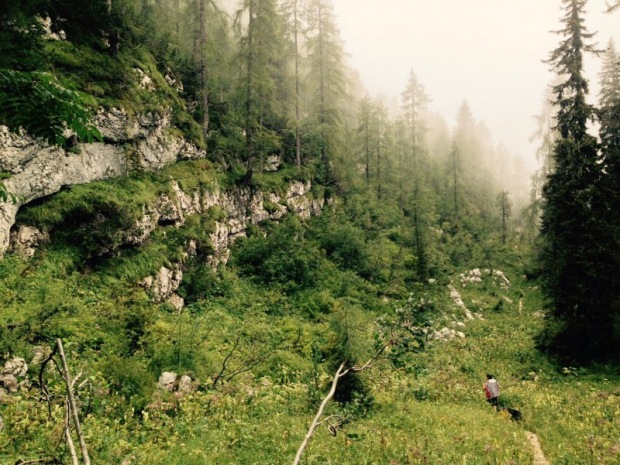 At last we glimpsed through the cloud a lake and knew we had made it to Dolina Triglavskih Jezer, the spectacular Triglav valley with 7 lakes. Not so spectacular for us though. We were staying with the dogs in the ” winter hut”, the one in the foreground.

The setting could have looked like the picture on the wall outside.

We had a lie down after our efforts to get there and discovered that above and next to us was a large party of raucous teenage French lads so no rest to be had.

After dinner we were rewarded by an hour of rising cloud which revealed the world around us and saw us scurrying further into the valley before dark. 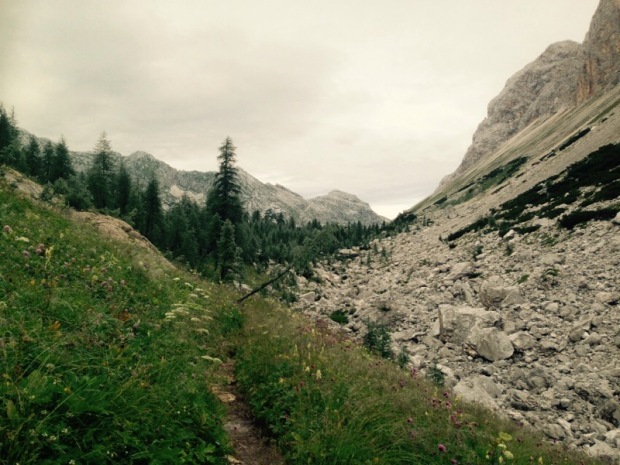 To be fair to the French lads silence reigned after 9ish and we slept well in our little bunkhouse in the mountains.

At breakfast we marvelled again at the young children that walk and get carried into these amazing environments. It seems it’s normal to take your baby to sleep at the top of mountains 2 or 3 times the height of Carrantuohill for days on end. And there’s loads of teenagers who want to hike from dawn till dusk, not a mobile signal to be had.

The promised thunderstorms had luckily not materialised so everyone was studying maps and eyeing up the weather conditions. We were taking a different, longer route back down so, with the misty drizzle clouds still about, we gave up on hiking further up the valley and headed for home.

This time we got to the little lake at the top of the direct route up Komarca and the path was studded with by rocks fallen from the cliffs above. Wouldn’t want to be unlucky.

We hiked along the top edge for quite a distance and there were a couple of places that were open to the cloudy valley below. 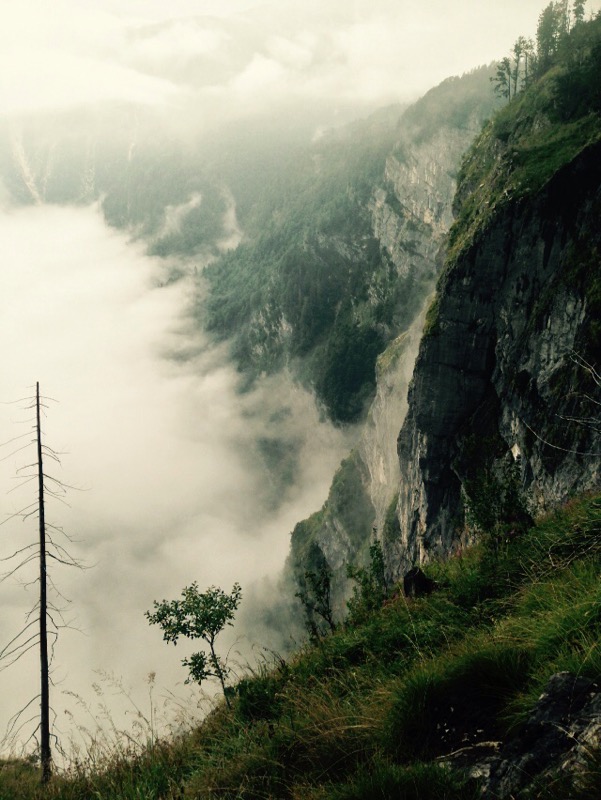 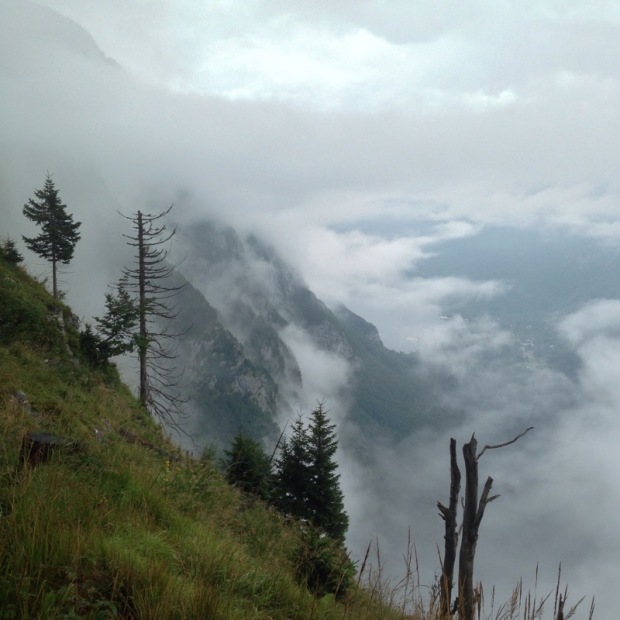 And then , ignoring the hut we had stopped at the day before in our desire to be back down at the happy camp, we hurried on down through the beech woods. 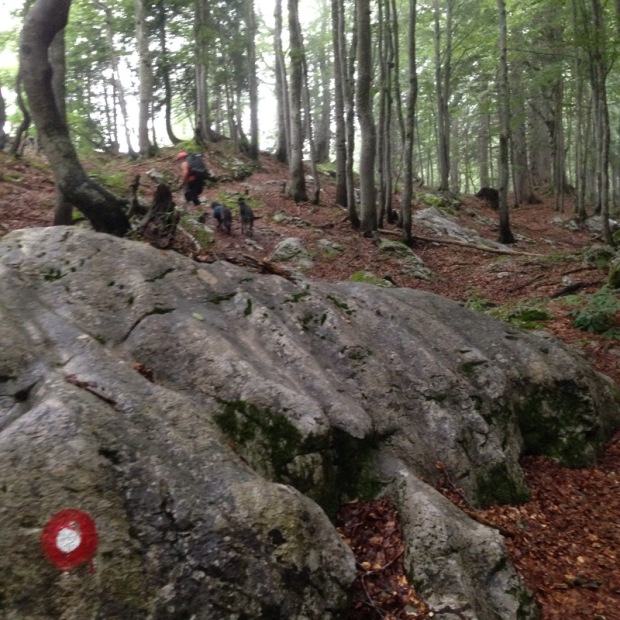 With the sunshine gone the camp is much quieter but still has an interesting selection of campers. I’ve been wondering about these ones. 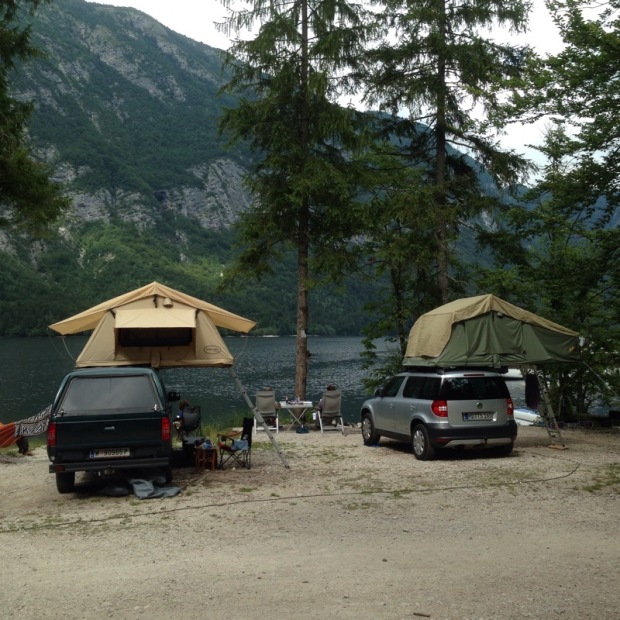 But now, finally, it’s time to say farewell to camp Zlatarog. We’ve never stayed so long in one place and probably won’t again. The lovely people here have recommended another camp further west but warned us it won’t be as wild. The e boat heads off and if the van battery is ok so will we. 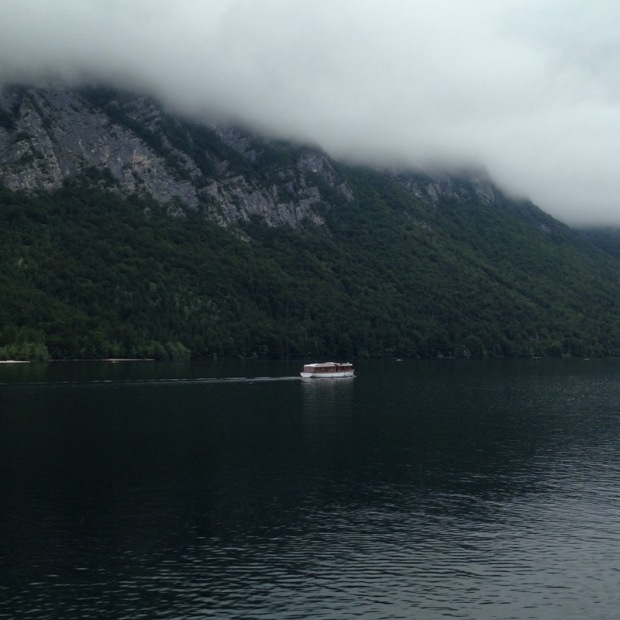