Two of the best days hiking so far have brought me along the south coast of this surprisingly unspoilt island. The south is easier going than the rugged north and thankfully flatter.

After leaving the monumental stones of Torre d’en Galmes to their timeless slumber I retraced my steps to the Cami de Cavalls and wove my way through the wild olives ( of which there are thousands but no cultivated ones ?) pines and juniper.  The track was blocked in places by tree fall from last weeks storm. 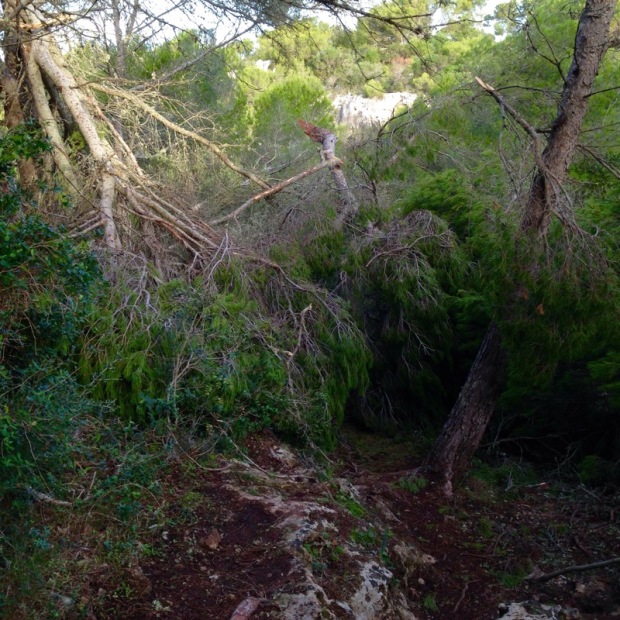 There is a gin distillery on the island, a hangover (!) from the British colonial days but I read they import the juniper berries as there are none on the island. The way went passed white limestone cliffs sporting brave little trees starting out on a tough life, and down to a little cove at Caleta Llucalari.

Then came the shock of civilisation.

Now that’s what I call sensitive development. To be fair it’s few and far between and after walking nearly all the way around the coast I’ve been pleasantly surprised how little of it has been touched at all. It could be down to the fact that MENORCA was the last province to hold out against Franco and so was left out of any tourism development money during the 60’s and after.

Anyway the holiday villas have some lovely floral displays, sometimes getting out of hand.

Some buildings have features you couldn’t get away with in the rain sodden North.

Some developments never made it. 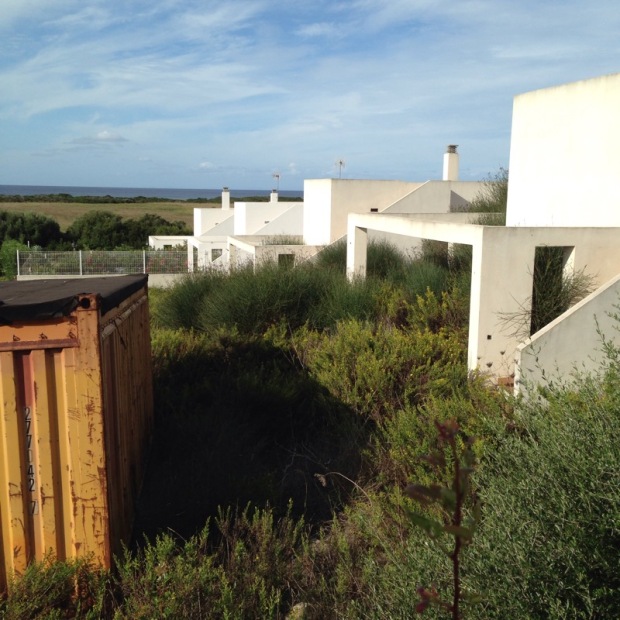 And some you might wish hadn’t. I wonder what the Irish Republican boys would think of their flag flying with this lot. 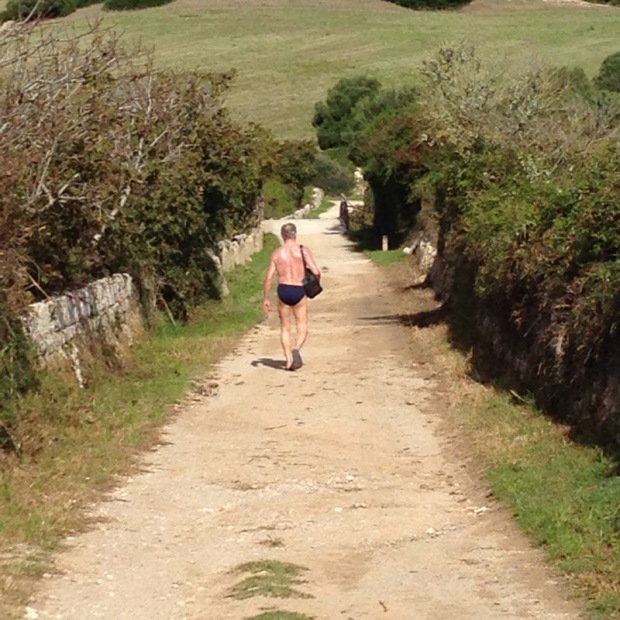 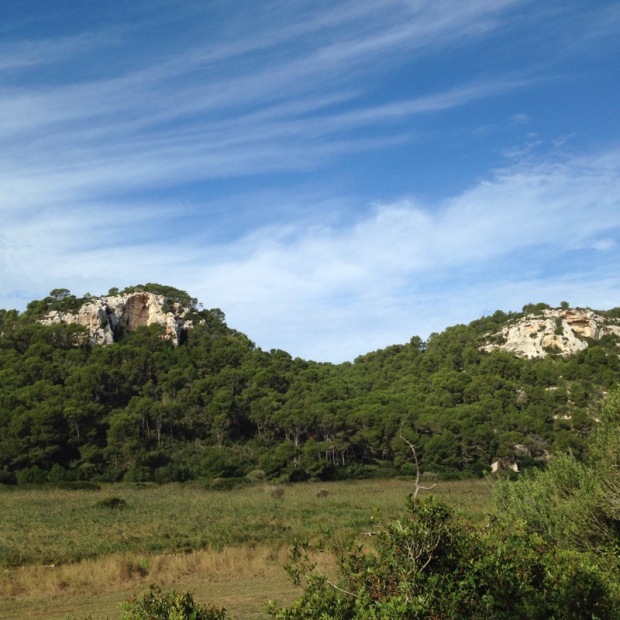 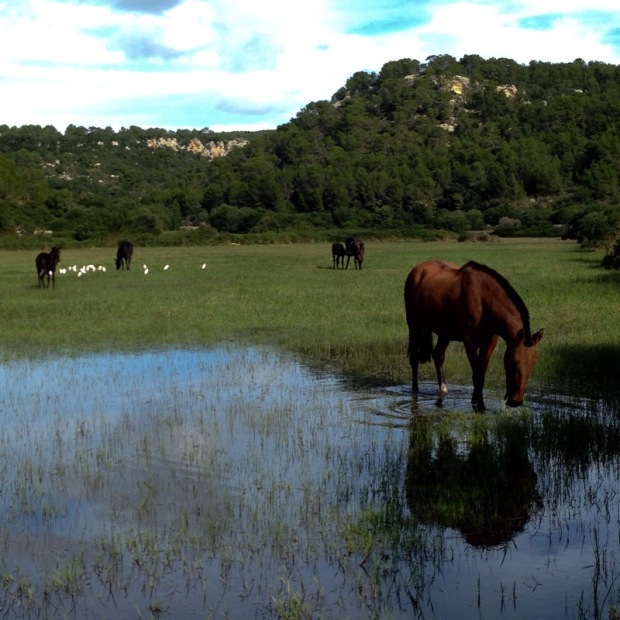 The coast featured many islets and many walkers ambling between resorts. 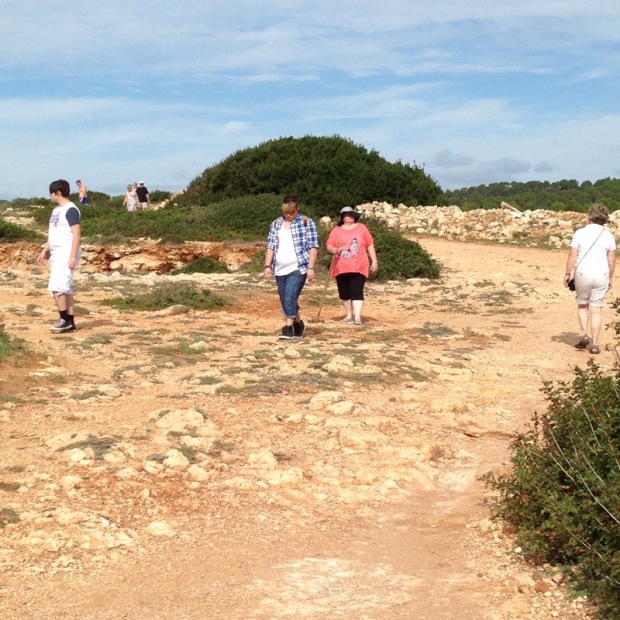 And as this Camino was originally for horse riders unsurprising to find them also. 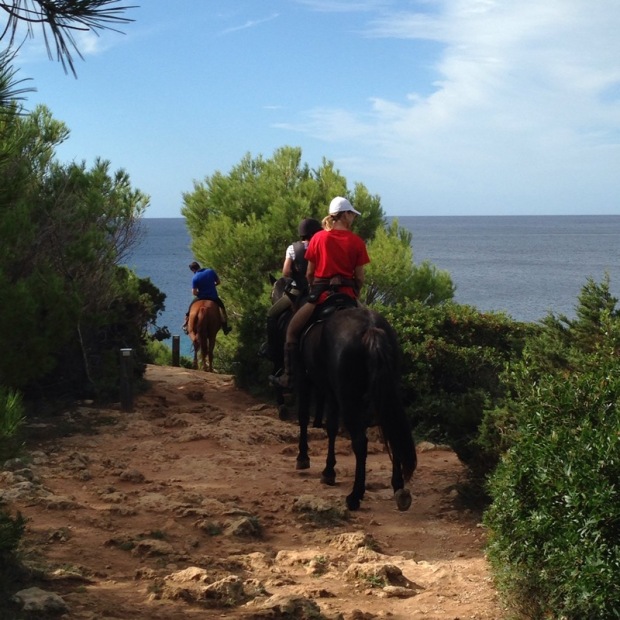 More development at Sant Tomas and then the wilds again. 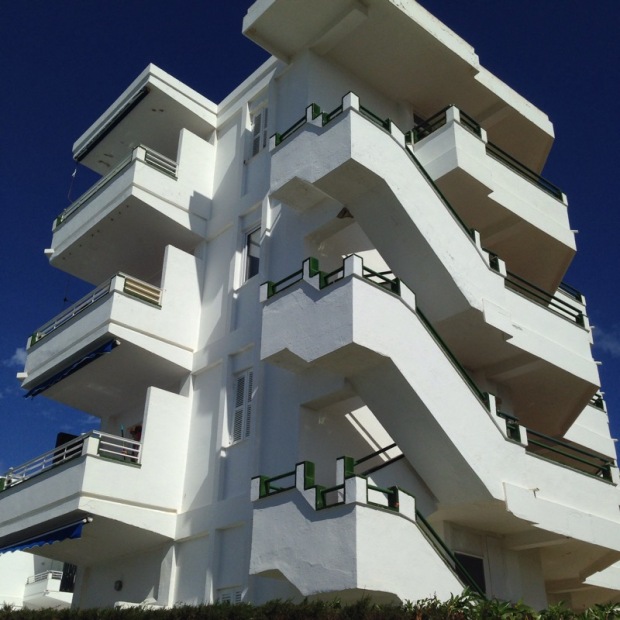 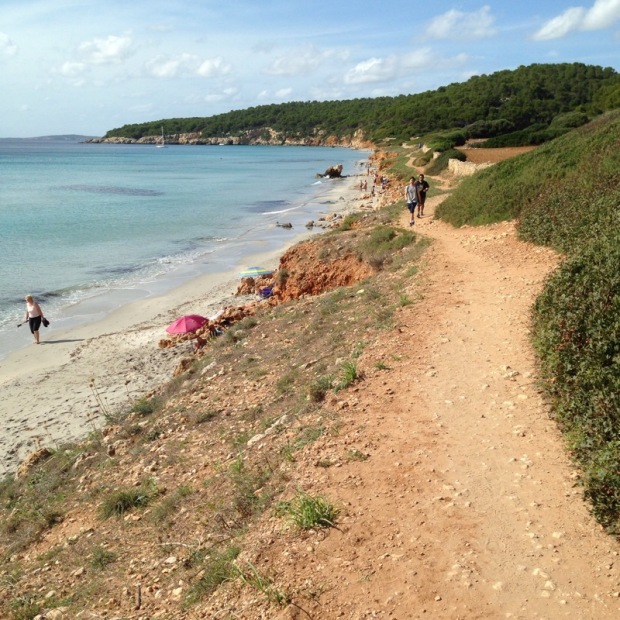 At this point the Cami de Cavalls heads inland but an alternative route sticks to the coast and passed beaches I didn’t want to miss. A lovely cliff top path through pines and over jagged limestone. 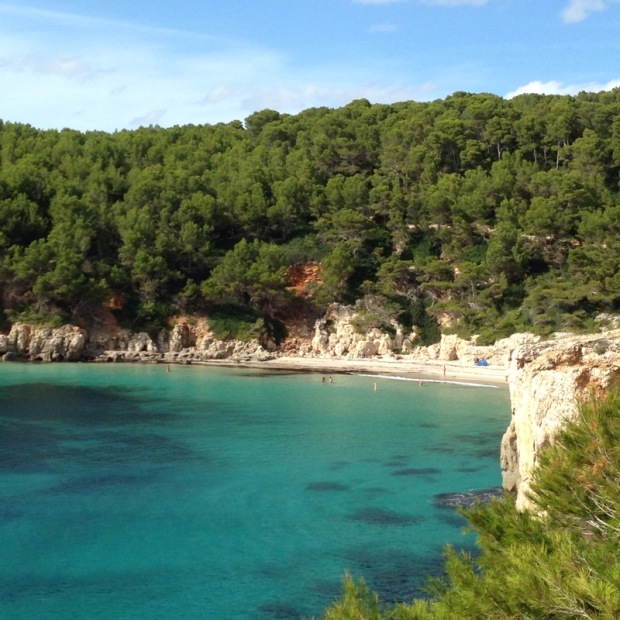 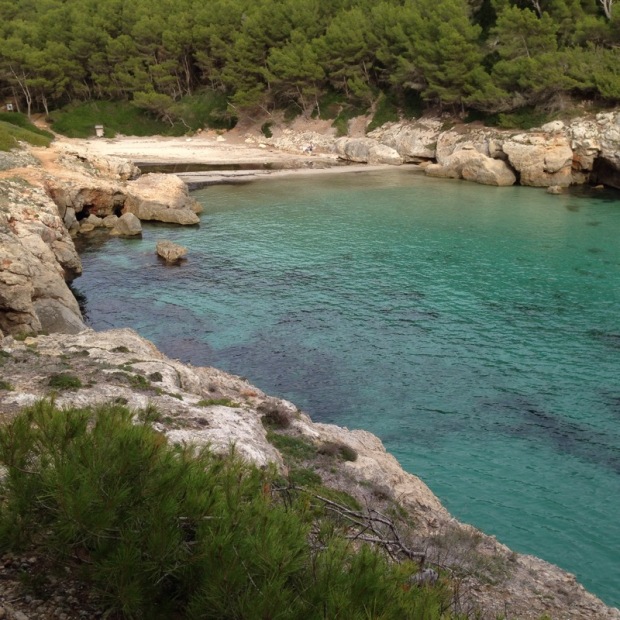 There were steps and cave houses cut into the rock. 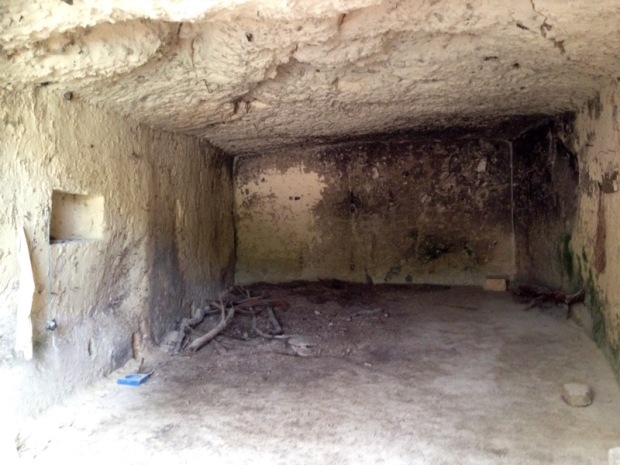 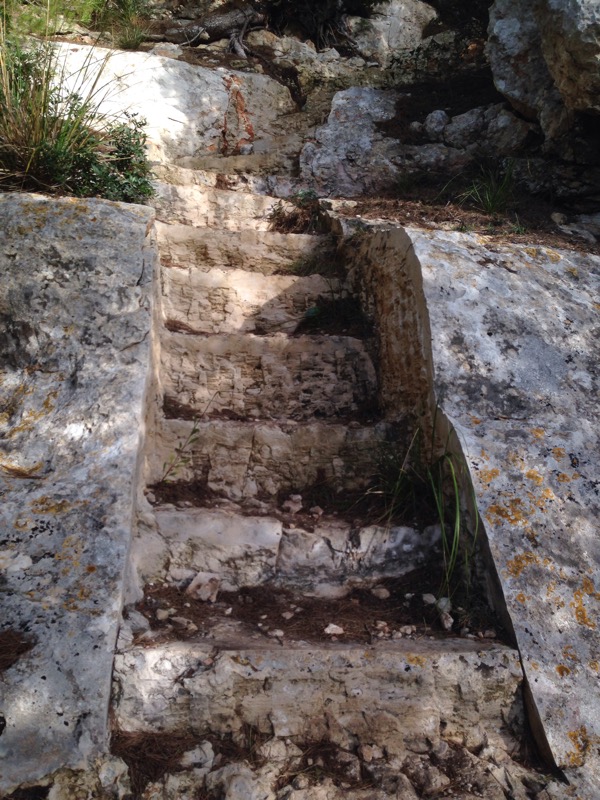 And interesting remains of former lives trapped in the stone. 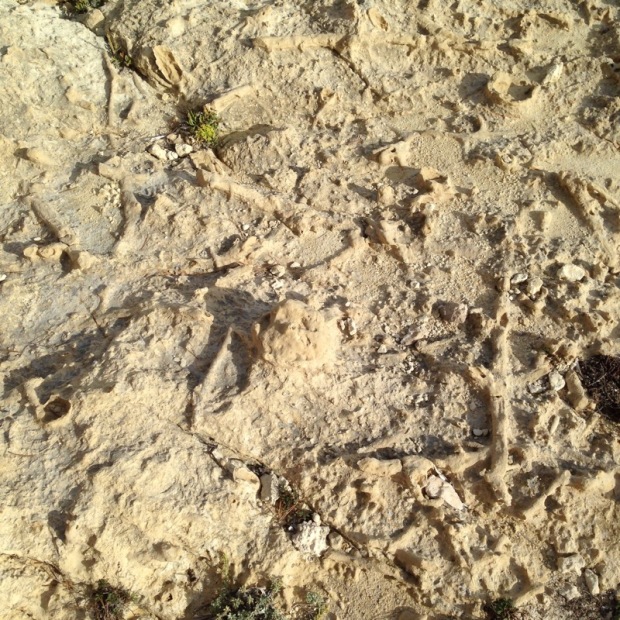 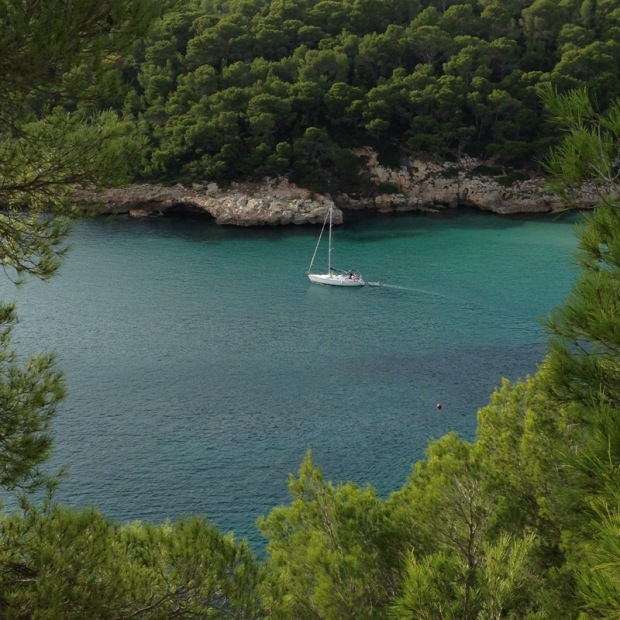 Then came adventure. I got to Cala Trebaluger where my guide mentioned a river crossing. It wasn’t as I imagined. 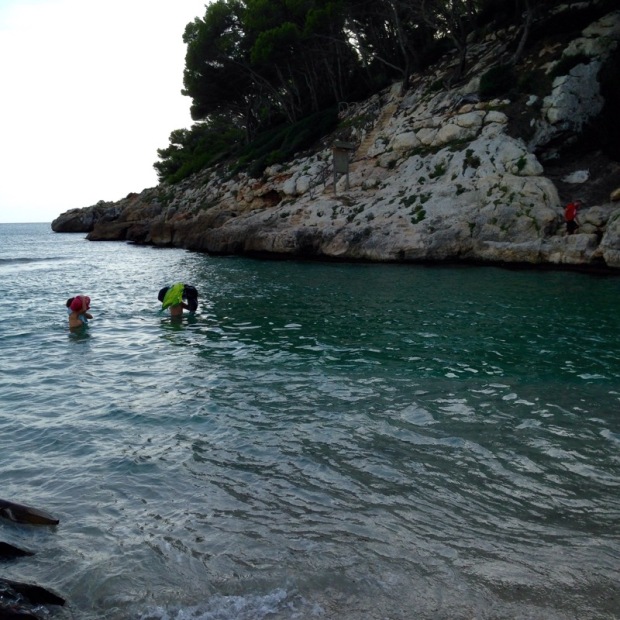 After watching a couple strip off and wade neck deep across the channel I was wary. My phone could get wet. Everything else, down bag, tent, clothes, food, clothes etc could also end up in the sea. It was a Bear Gyrils moment. Channeling my inner Ray Mears I stripped off stuffing everything in bags, in bags, in waterproof sacks. Hoisting my 12kilo rucksack on my head I gingerly followed the route across indicated by my fellow intrepid adventurers. It got tricky on the last leg across the deepest dip but luckily they were there on the rocks to release me of my load and I scrambled ignominious and naked up to join them. We can be heroes.

So off through the woods again to find a place to camp. I thought the next beach, Cala Mitjana, might be nice and so it was.

I found myself a sheltered hut set amongst civil war defences and an old limestone quarry overlooking the beach. 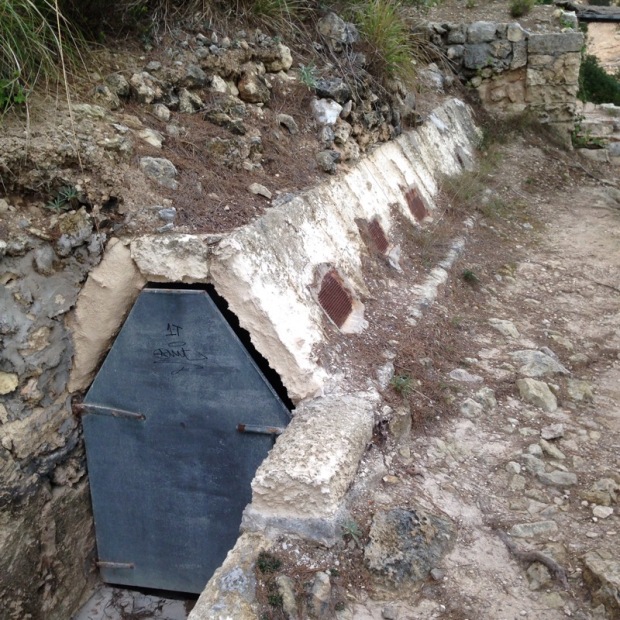 As I settled in about 15 kayaks paddled in and set up camp for the night. So much for the 4000€ fine for camping.

A nice night spent listening to the lapping and flapping of water on the rocks.

More pine woods in the morning led to the resort of Santa Galdana a 5 hour walk from my destination for the day at Cala en Bosch on the southwestern tip of Menorca.

One feature of the domestic buildings on Menorca I hadn’t seen before are the zigzag tile downpipes. 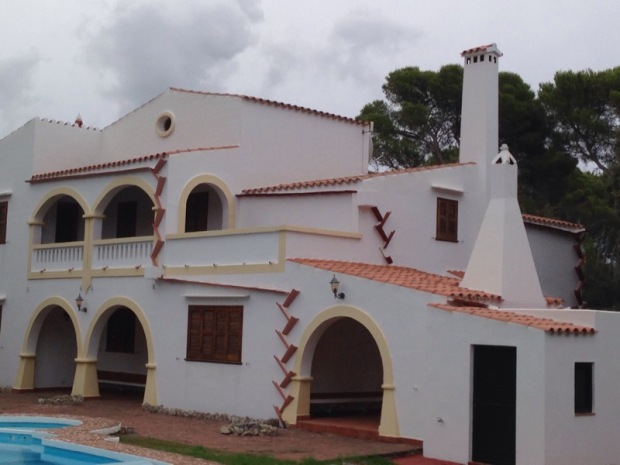 I was tempted to swim here as there were beachside showers but it wasn’t hot enough so after a cafe con leche and wifi chat with home I headed off into more pine woods on a wide track and long and winding steps to a succession of beautiful access free beaches. 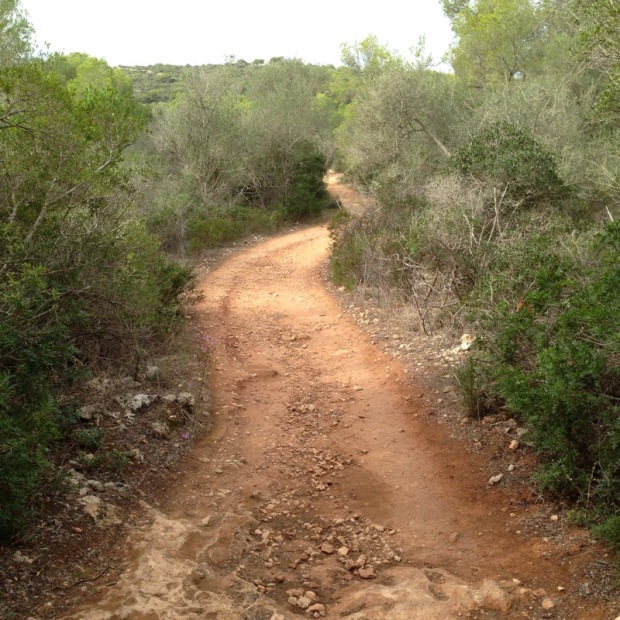 Some rocky stretches and interesting scat for the admitted minority interested in such things.

I came to what I knew was the last nice isolated beach on my trip so had to don the goggles one more time.

There were a lot of civil war emplacements in the following stretch that I explored as well as some much older structures. 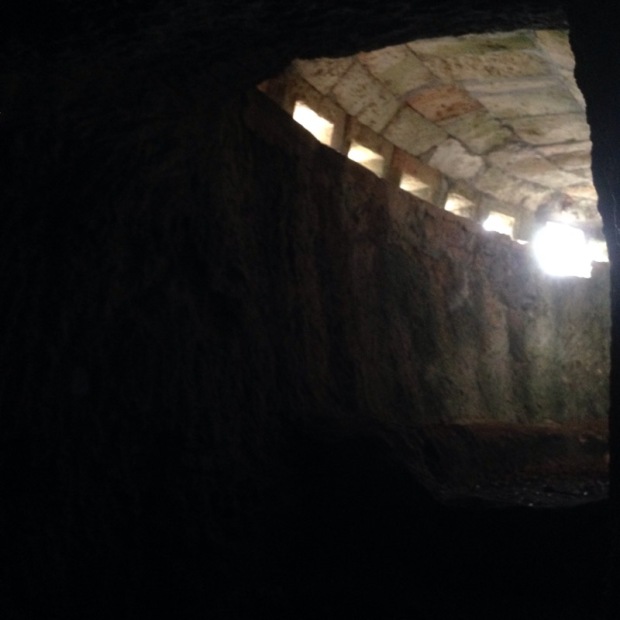 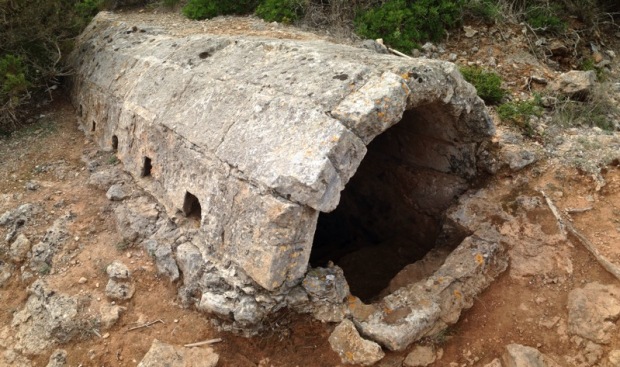 I met up with Birgit again on her journey in the opposite direction. It’s amazing how after meeting briefly once fellow travellers can seem like old friends. May the road rise to meet you Birgit.

Speaking of fellow travellers, I came across the cave/ house mentioned by Olof back in Cala Morell but it was too early to consider staying there and also too busy with tourists. 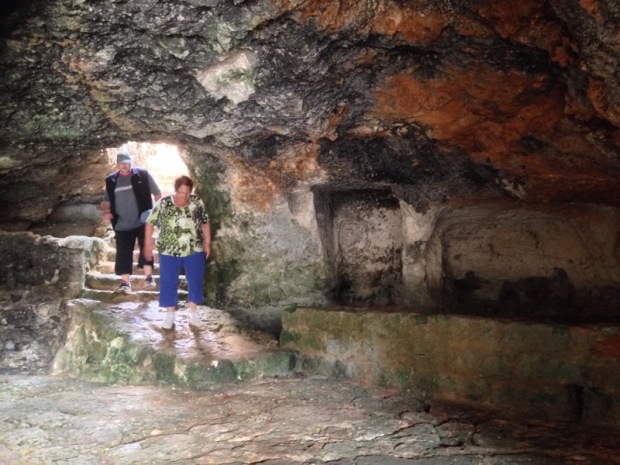 A little later the sights and sounds of the resort of Son Xoriguer drew me to the bar where I write this. Tomorrow is an easy 4 or 5 hours back to Ciutadella where I started this odyssey.

But now I have to find somewhere in resortville where a man and tent may go unnoticed. 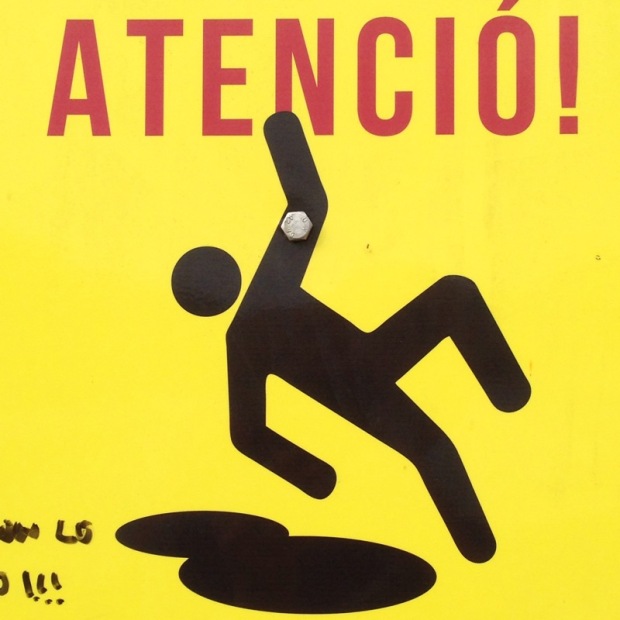