The plan was to carry on down towards Porto da Cruz but to peel off on a minor road above the coast towards the east and follow trails as far as we could along the cliffs on this wild north coast before dropping down south again to Canical. A distance of about 20km again but involving a lot more ups and downs.
We’d been listening to the rain during the night and it was still coming down whilst we had our breakfast ” below stairs” but by the time we’d donned our packs and set out it had decreased to a light drizzle and before long had turned into what we at home would call” a fine soft day”.
The road down towards the sea was very steep so we took it handy past the houses with their fancy corner roof tiles and drying pumpkins. 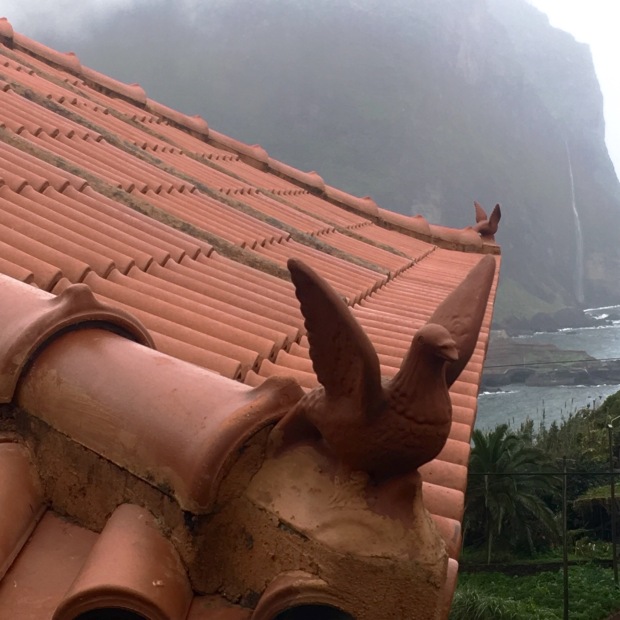 There were quite a few heaps of crushed sugar cane that we thought must be animal feed and little stands or crops of sugar cane and after getting down to the sea and starting up another steep slope we were hailed by a friendly local who insisted on having us in to sample her sugar cane hooch.

It was very pokey and she crushed some cane into juice to wash it down with. A fine start to a demanding hike.
We clambered on up the hill with the woman’s cheers of encouragement fading behind as we past through the little hamlet of Larano and a bar we had no further need of.
The moisture in the air helps a variety of plants to thrive including the mandala like succulents that were our favourite, clinging flat to the rock faces 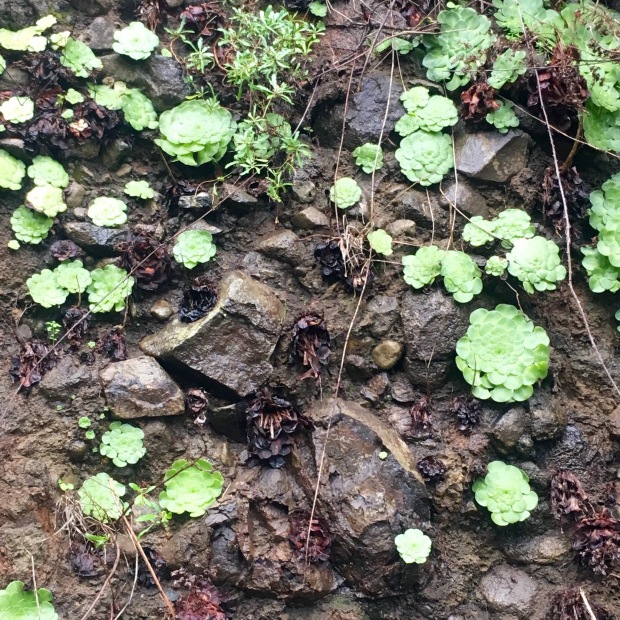 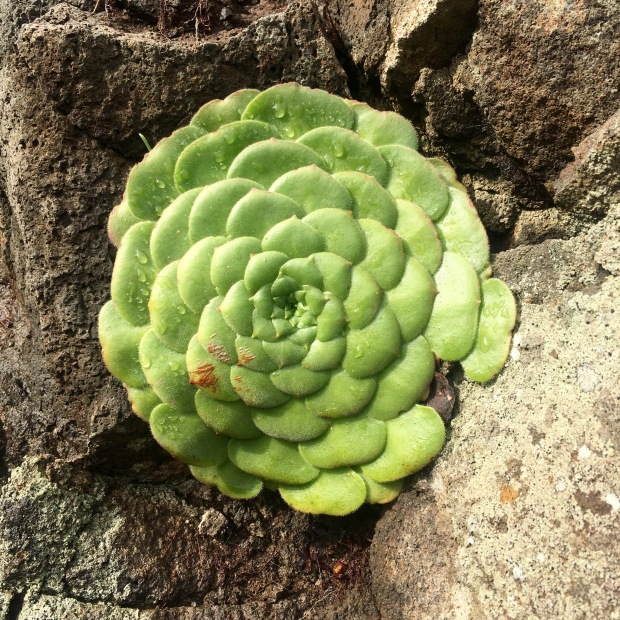 To our right we could look across the wooded valley of Ribeira do Seixo with some remote little homesteads and a fine waterfall in the woods. 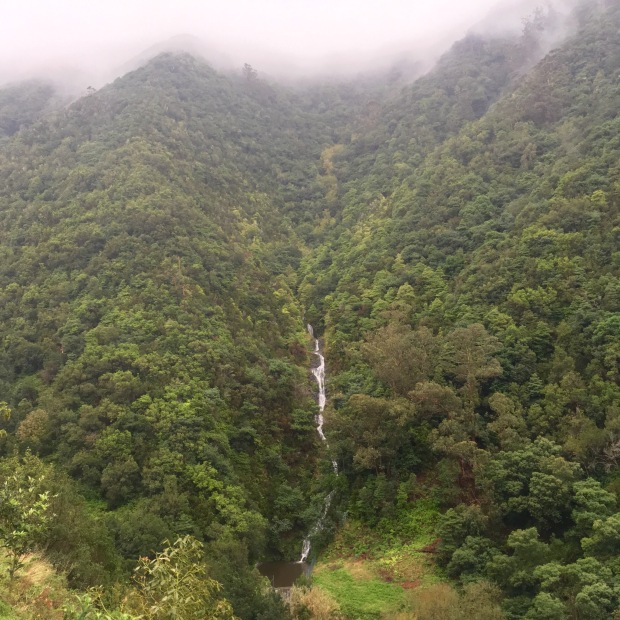 The Tarmac road became a concrete one as we climbed past the last houses, then a gravel track as we reached the top 350m above Cova das Pedras where a cable car still stands, allowing access to some very inaccessible terraces way way below.

There were lines of grapes for Madeiran wine being cultivated up top too as as we moved along what had now become a narrow path we saw that any ground possible for use was put to the mattock.

After the nights rain there was plenty of water about to feed the streams and waterfalls that ran and fell across the twisting path and slippery rocks meant that attention needed to be paid to where we put our feet rather that gaze slack jawed at the awesome views of the coastline. 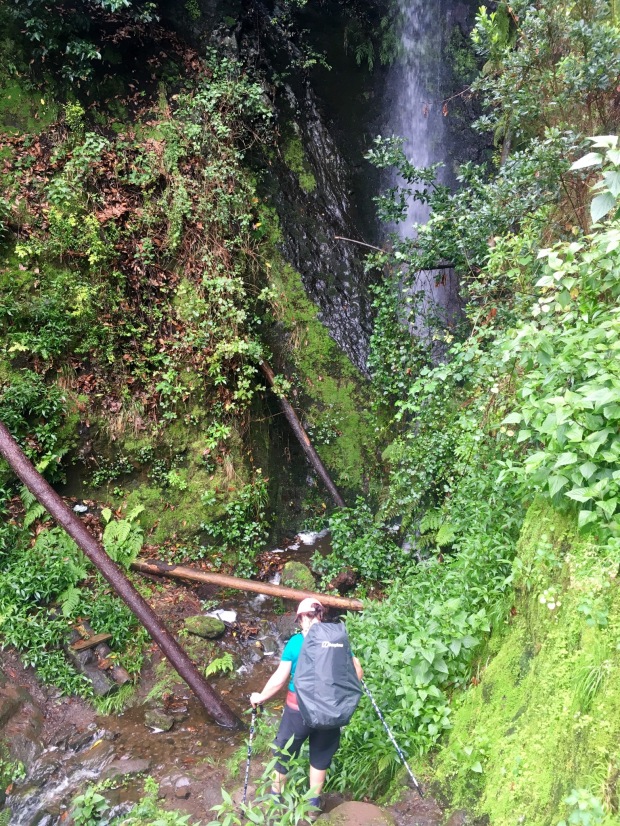 The tiny path snaked around the gullies on the sheer mountainside flanked by thick woods of mimosa, eucalyptus , pine, giant heather, gorse and laurel. At one point steps had been cut into the Rock and a hand cable helped the steep climb.

As we emerged from the enclosing tree cover into clearer grassy slopes we rounded a prominent headland that opened up new even more exciting vistas that the icamera cannot capture. Far below, on a 60 degree slope were some more bizarrely situated vegetable plots.

We hugged the towering cliffs of fantastical hues, born in the cauldron of volcanos, to avoid the pull of the immense drop into the thrashing azure seas. The path was narrow and there was no avoiding the showers from waterfalls cascading from high above. 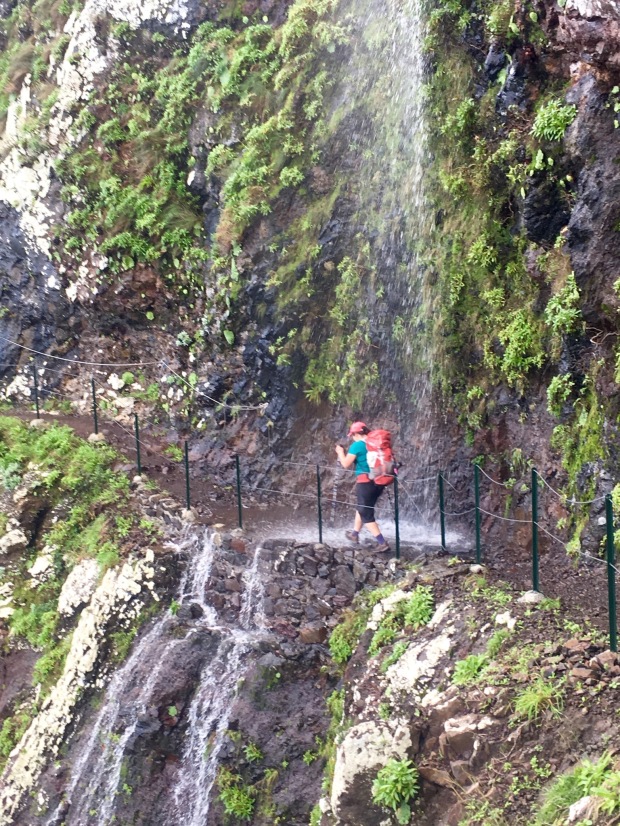 Heading back into a thickly wooded area of laurel, mimosa, giant heather, and gorse we were without views for awhile before emerging again and looking back at the thin line of our path etched faintly into the landscape. 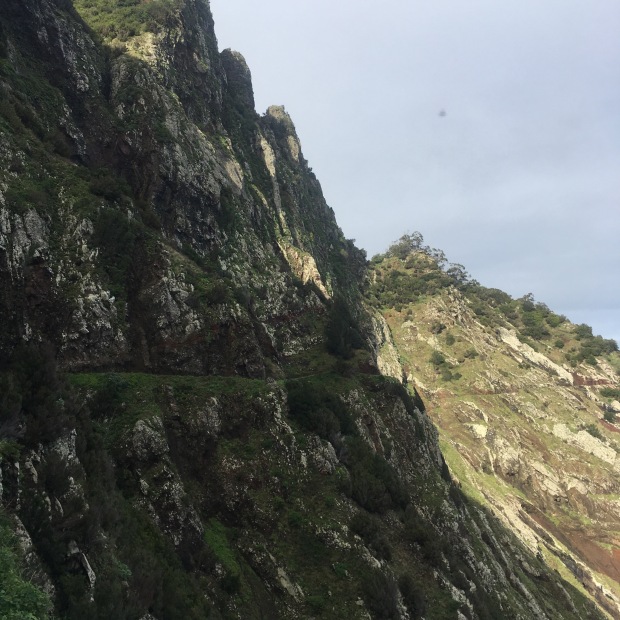 We reached another open headland at Boco do Risco where the main path turned south. We were heading up and on along a lesser known and used trail that continued following the crest of the north coast. We past another isolated small holding as we headed higher to spectacular views east and west.

The colours of the rocks and soil was dramatic as we picked our way across the bizarre landscape. 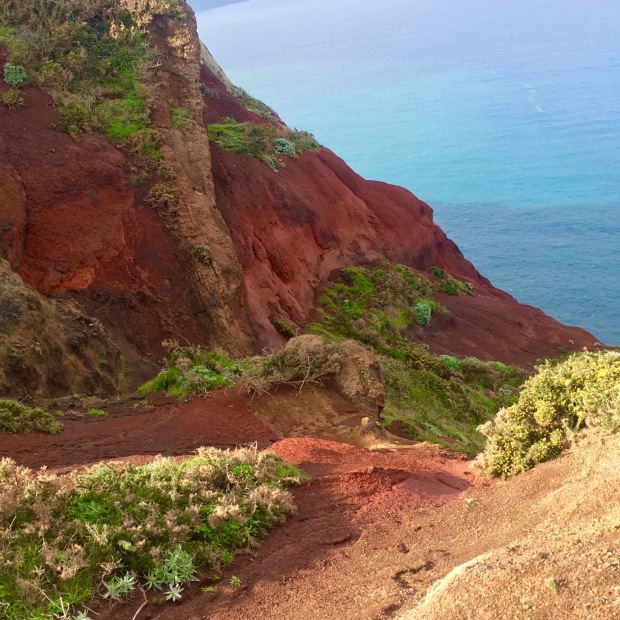 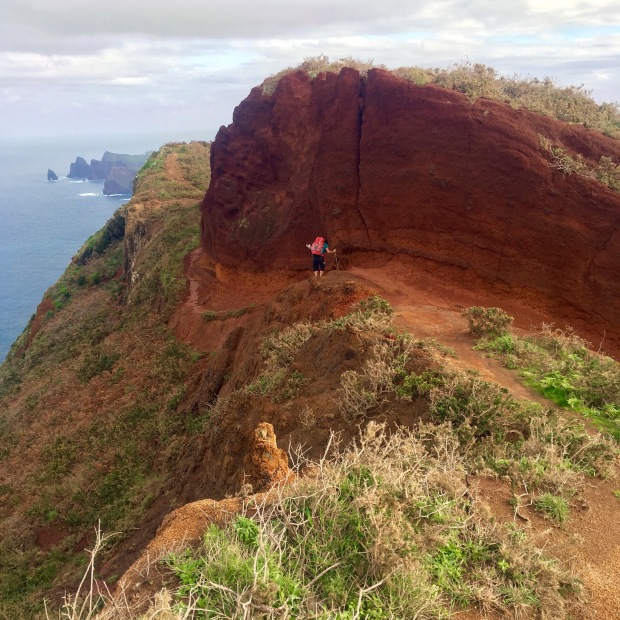 Eventually our trail had to turn away from the colourful cliffs and we made our way down through cleared eucalyptus woods and into the suburbs of Canical, a busy industrial seaport with an incongruous beach scene.

It had been a fine days hike but demanding on the legs and they were grateful to be carrying us the last few steps past the local domino players to our Airb+b. 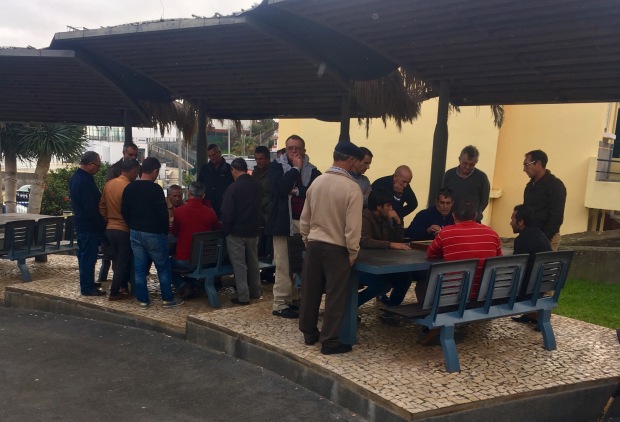 With a cheap but excellent seafood restaurant downstairs it was time to think about food and then with the birds home to roost and the last flights coming in, time to think of bed.