I must have come further than I thought before camping as it didn’t take me to long it the morning to climb up through a damp drizzle into Mijas. The batteries in my GPS had been exhausted and I cast around for markers.

Approaching the village there was a mix of housing again, simple cabins and the enclaves of villas. 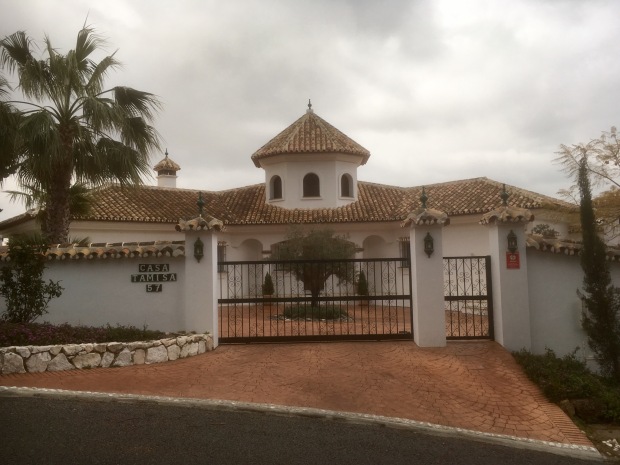 I was surprised to see a troupe of wild boar descending to the road, and they were equally startled to see me and shot off into the scrub.

I emerged into the town under a leaden sky which did not detract from the attractiveness of the place. After settling in to my room adjoining a beautiful floral patio I set off to explore this remarkably popular tourist honeypot. 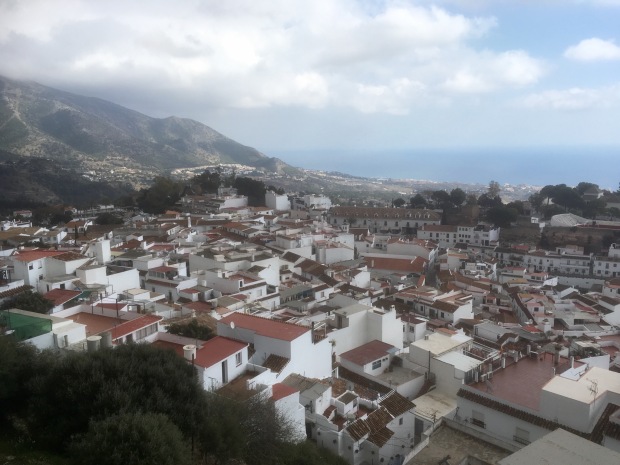 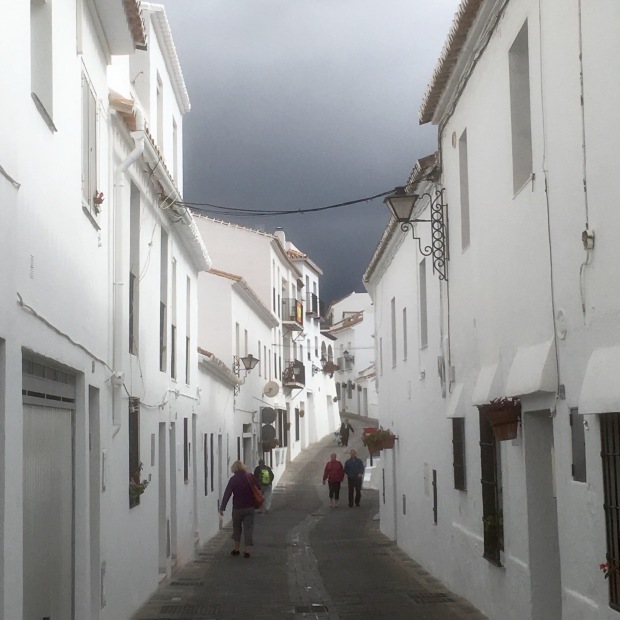 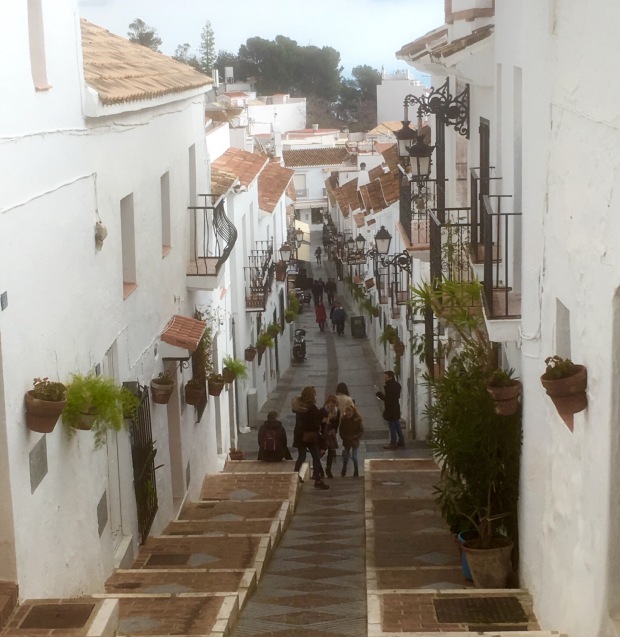 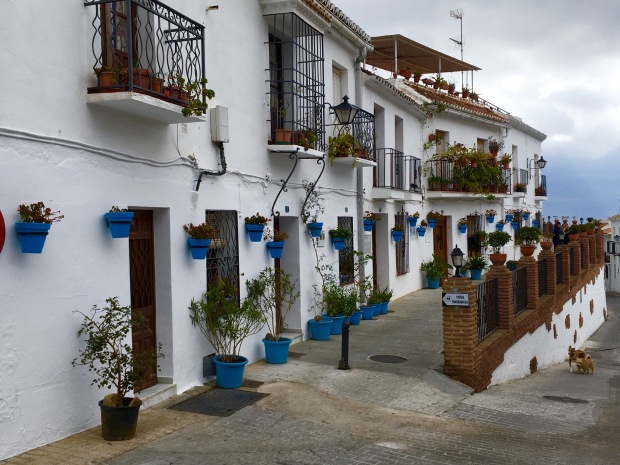 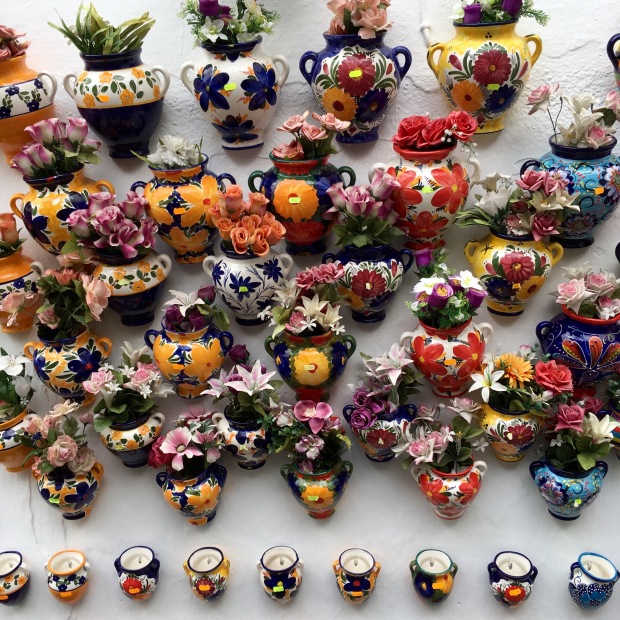 I discovered a quaint little ( fittingly) museum of miniatures and spent some time gazing in wonder at the exhibits, including a painting of a bull fight on a lentil, portrait of Abe Lincoln on the head of a pin and a genuine shrunken head. Bizarre. 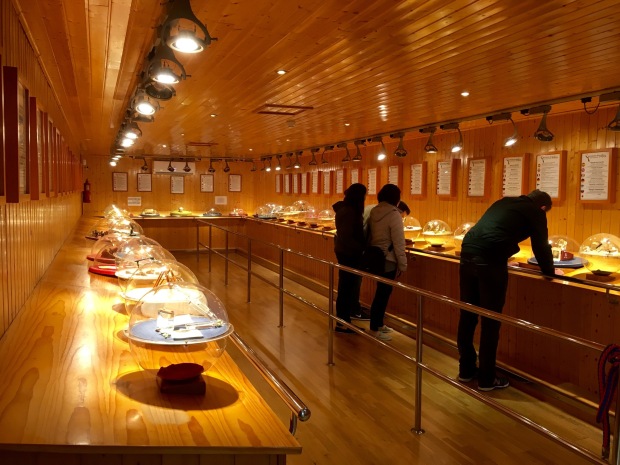 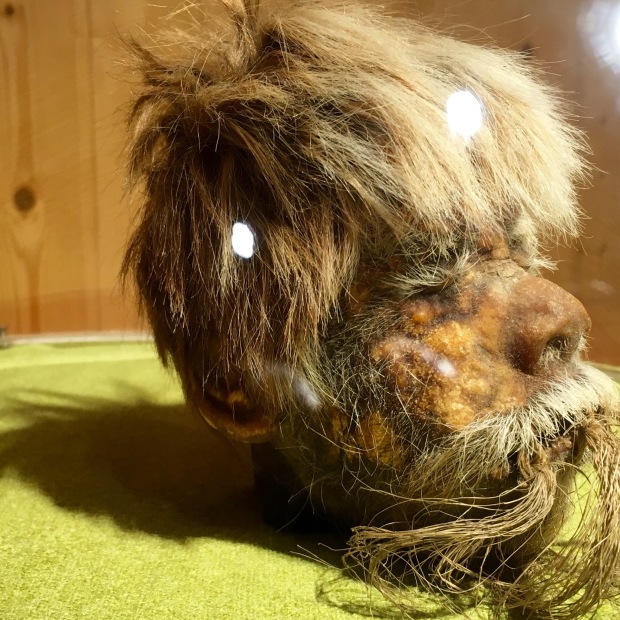 The town has marketed itself extremely well and even on this fairly bleak February day there were coach loads coming in to peruse the multitude of upmarket shops and maybe take a donkey or horse and carriage ride. 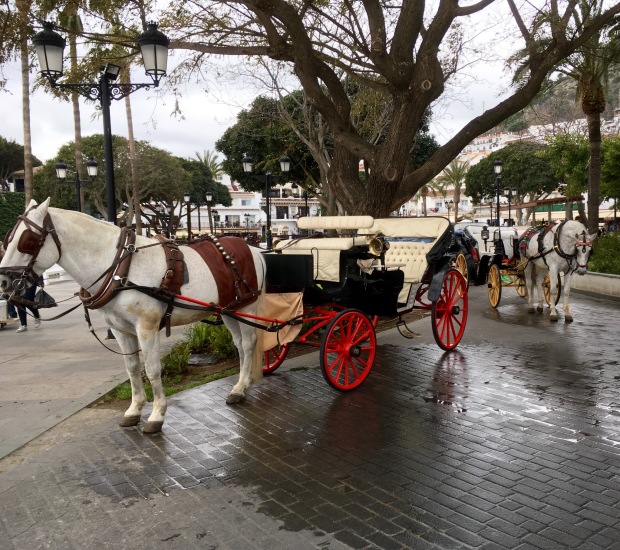 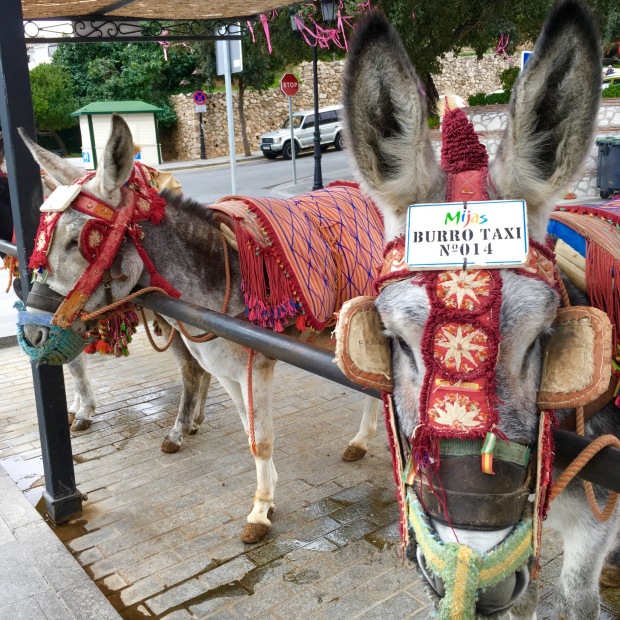 The forecast rain again failed to appear overnight although there was plenty of low cloud about as I set off next morning on the path above Mijas. 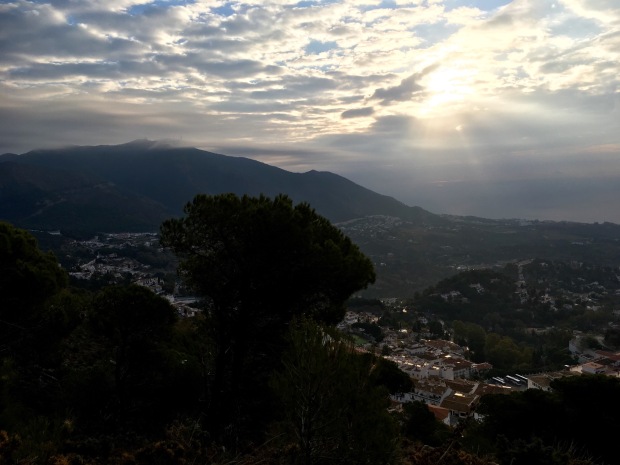 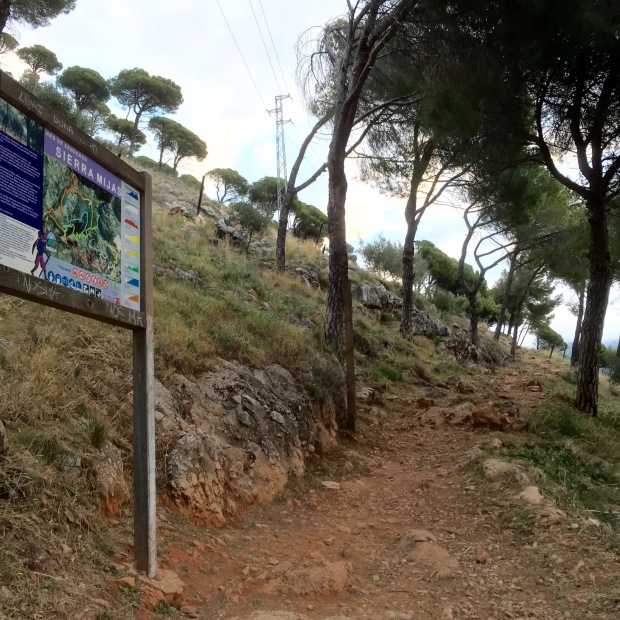 I passed the Ermita del Calvaro chapel and continued up into the mountains studded with Maritime, Aleppo and stone pines. 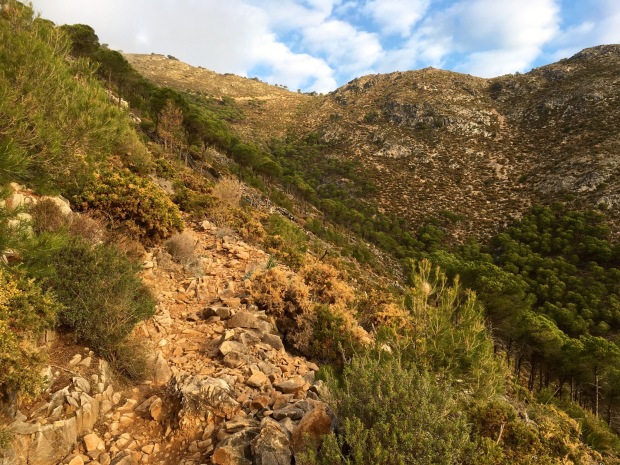 I spotted a group of Ibex above me as I climbed the well made path up to a ridge at about 800 m and joined a broad and fairly level forest track. 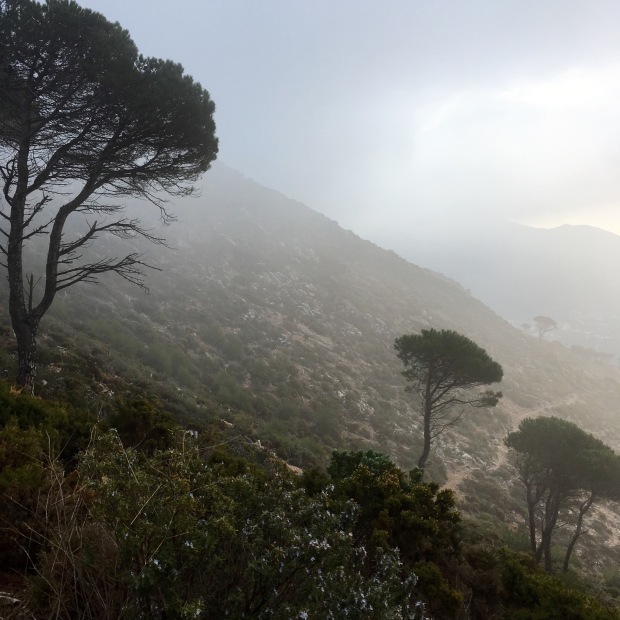 The light was soft, filtered through the cloud that swirled around me, making the colours of the vegetation muted and giving the sunnier Costa a shine. 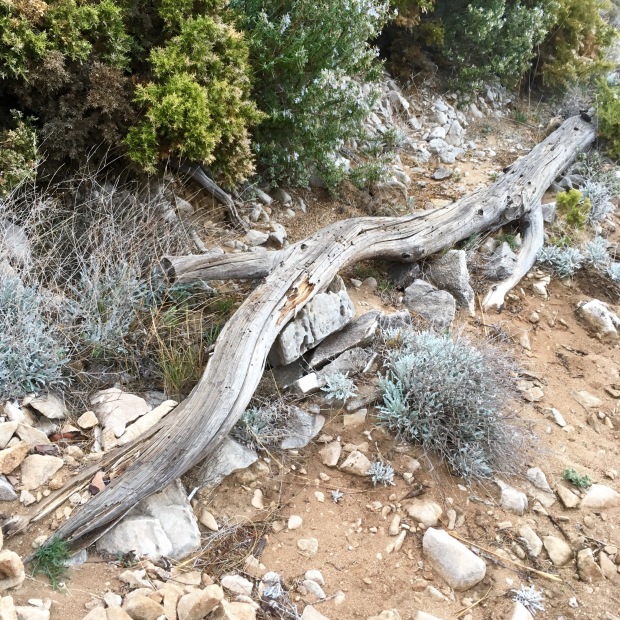 This Sierra is mostly made up of Dolomite, which breaks down very easily to sand and has been quarried on an epic scale to facilitate the building of the coastal resorts. They were remarkably sculptural. Land art on a monumental scale. Or looked at another way, hideous scars in the land that now have been thankfully replanted. 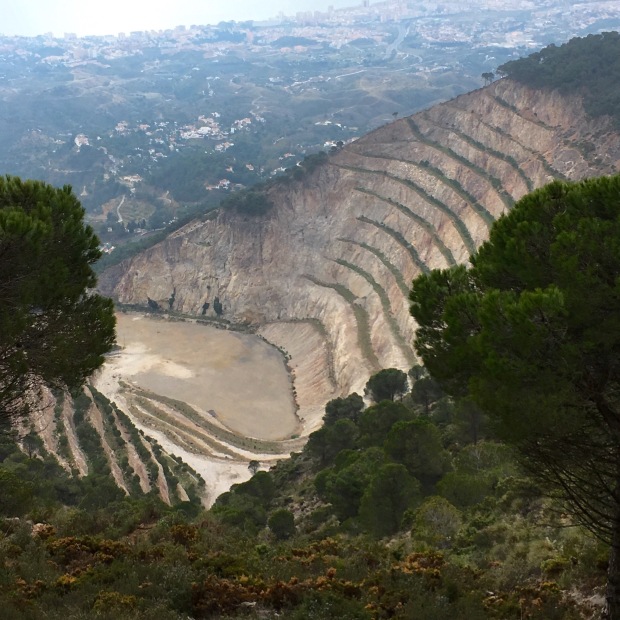 It was a Sunday and there were groups of people out enjoying the mountains in spite of the cloud. Flocks of cyclists whipped past me on the tracks, runners moved remarkably fast over the rougher trails and groups of walkers crisscrossed on the variety of tracks. 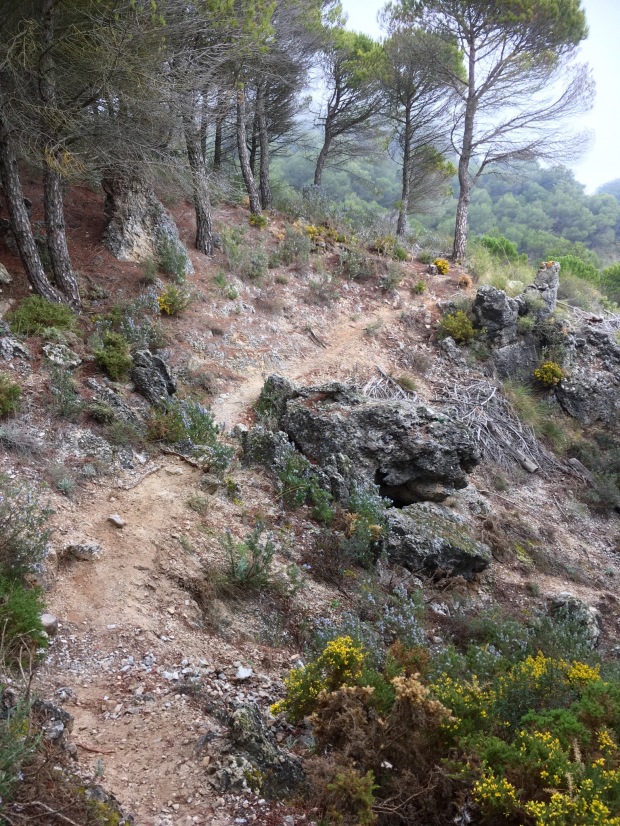 I was up to and over 900m a couple of times and hoping for some spectacular views over towards the north, to the Central Limestone Arch mountain range that had been such a feature of my first week or two on the Gran Senda. No luck however as the cloud enveloped the slopes. It made for atmospheric views of the sharp ridge as I made my way cautiously along. 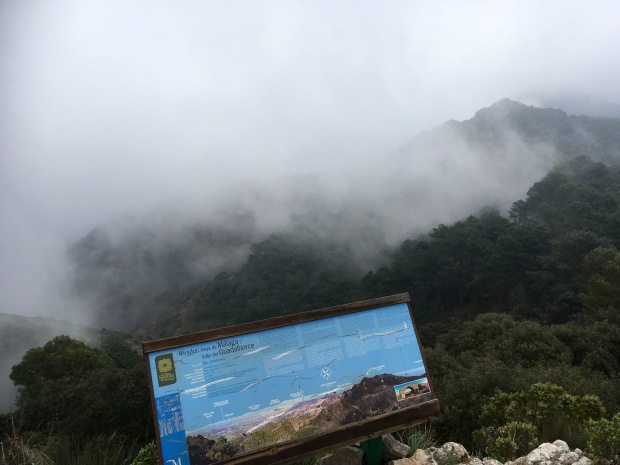 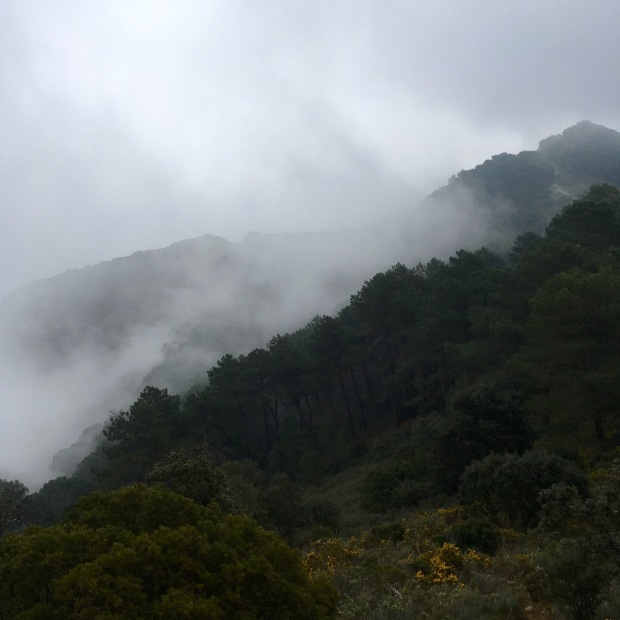 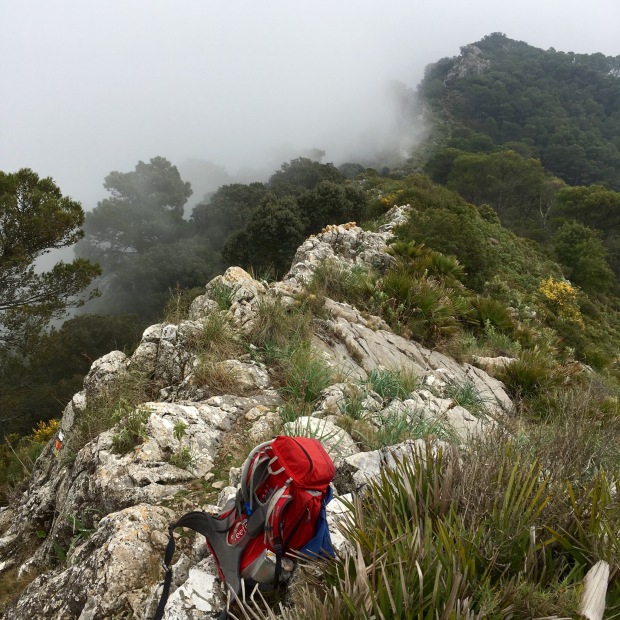 At home in Ireland we’d call it a “fine soft day”, which it was, but I was happy to come to the antennas which marked the beginning of my descent on the sandy paths.

The dolomite allowed all water to pass through very rapidly so the almost soilless conditions made for hardy plants made to defend themselves. 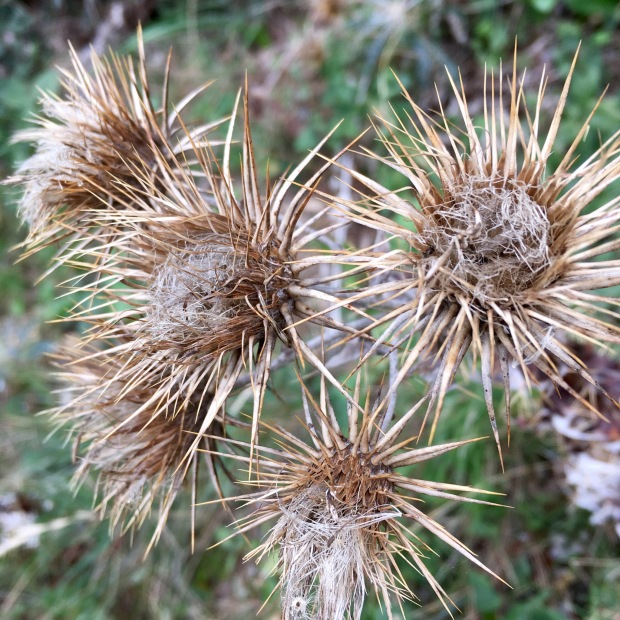 There were also junipers, Rosemary, brooms and more familiar blackthorn and bramble in the lusher areas.

Then as the sun began to appear again the noise of the motorway grew louder until I was right above it, under it, and past it on the pretty street of my accommodation. 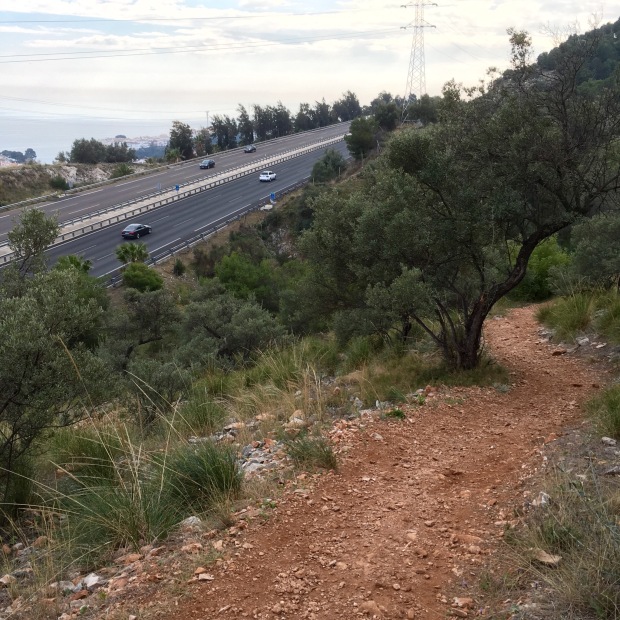