A few days work done on the finca and time to head off in the camper on another hiking/ exploring trip. This time we were off Northwest, to Huelva province and only about 60 km from the Portuguese border.

The hiking around the Sierra de Aracena is renowned for its beauty so we were going there for a few days – but en route we wanted to stop at Riotinto the birthplace of the river and the global megacompany.

In a way the landscape was the exact opposite of Aracena’s carefully nurtured or natural and wild countryside. Riotinto’s has been torn asunder for millennia for quick material gain, literally clawing the earth apart to get to the wealth of minerals hidden in the Iberian Pyrite Belt.

A massive area of open cast mines both current and exploited and abandoned coupled with vast spoilheaps of vivid and florid colors make for a man made,surreal, and toxic, environment. A (un)healthy balance to all the gloriously bucolic green and pleasant lands we’ve been wandering through. 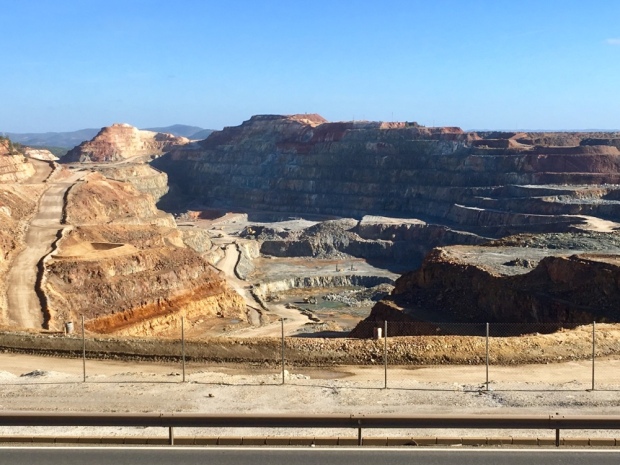 The largest open cast mine in Europe is here, recently flooded and left. But it’s been going on for 5000 years with the Iberian miners leaving many Neolithic reminders of their presence around the area. Then Phoenicians mined copper and mixed it with tin from Cornwall to make bronze. The Romans followed after but preferred the gold and silver in the rocks, as well as copper, lead, iron and sulfur.

After admiring (?) the view from the mirador on the edge of town we headed to the abandoned wastelands of Pena de Hierro. 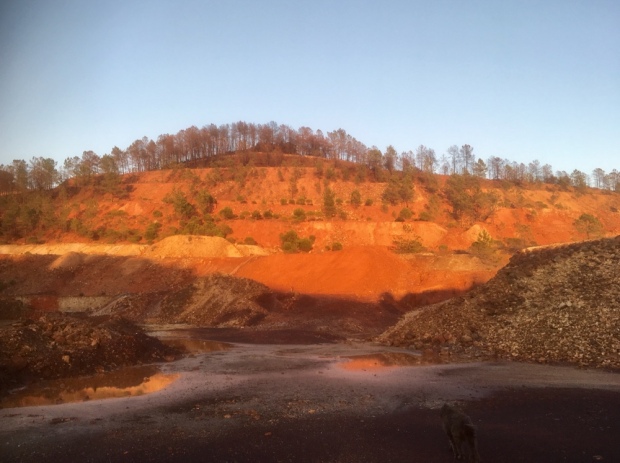 The setting sunlight emphasized the already red hills and heaps but there was a host of other colour too. 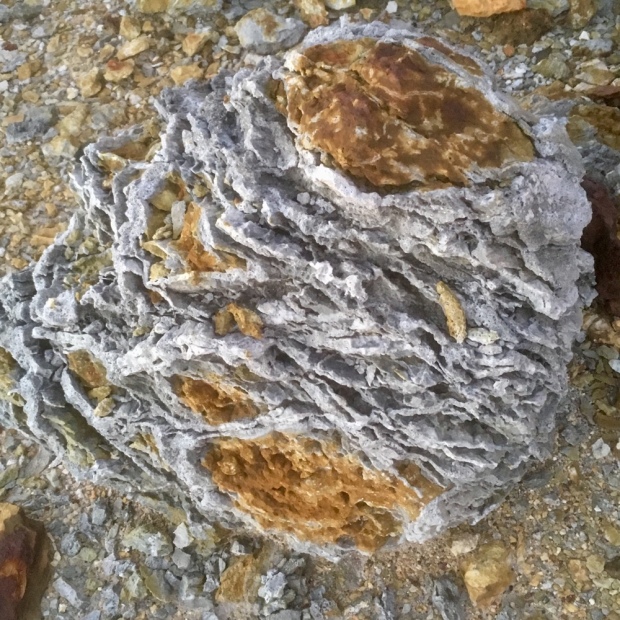 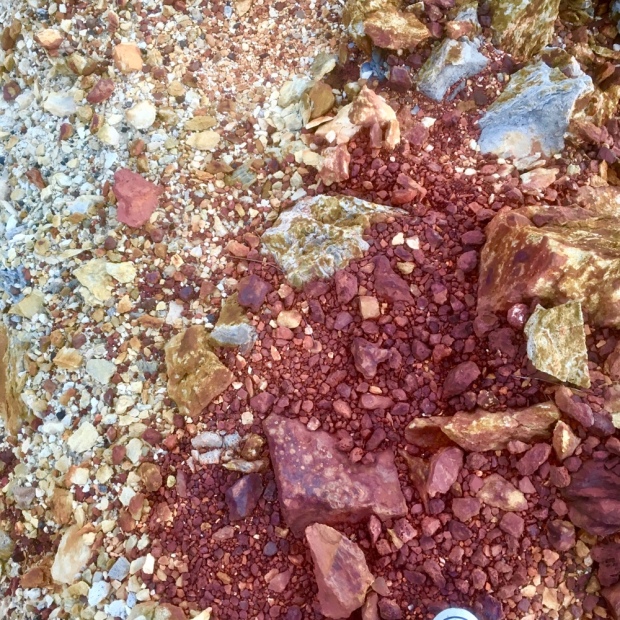 It was soon dark so we postponed our exploration till the morning after checking out our route on a suitably bizarre map. 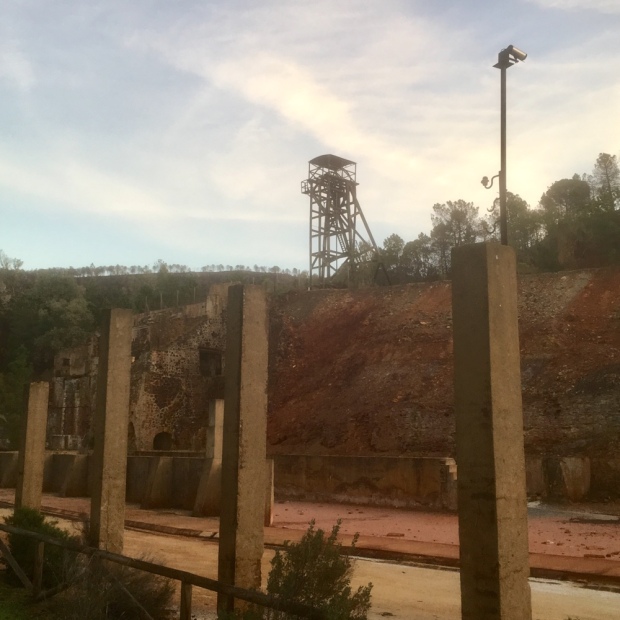 The rising sun made for an equally effective lighting of the land as we wound our way up the hill above the derelict buildings. 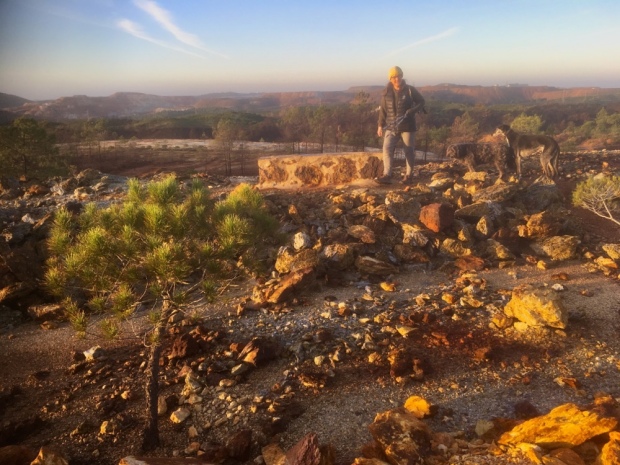 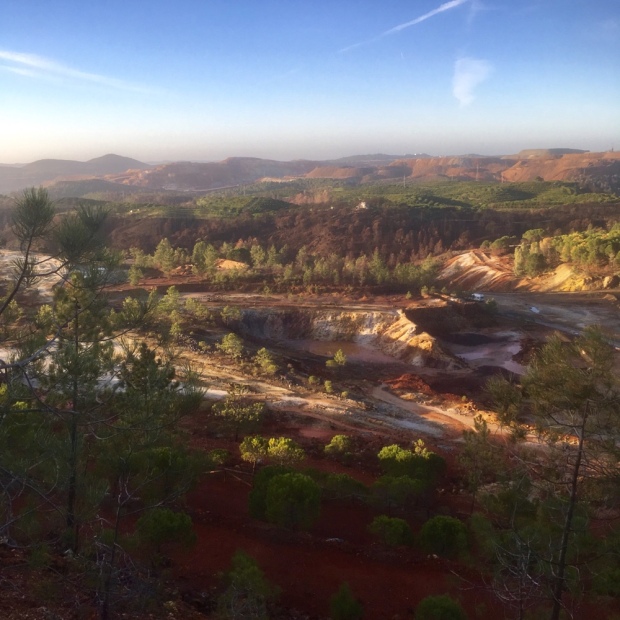 Within the hill lay the crater whose multicolored walls spoke of a riches of minerals. 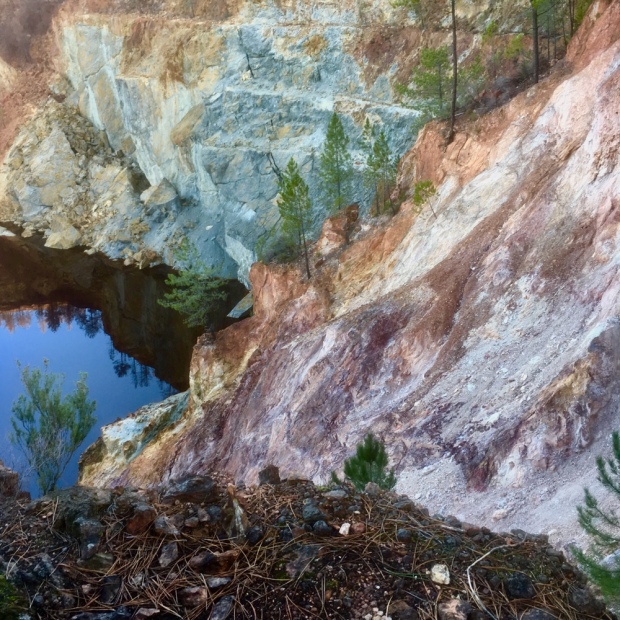 The entire mountain side around had suffered a devastating fire fairly recently, increasing the apocalyptical look and feel to the place, although we were glad so see signs of recovery in the eucalyptus if not the pine.

The Brits had planted these sierras originally, to use in the mines. They had arrived in 1873 in the shape of the Riotinto Company, taking over the unproductive state owned mines and transforming ( and soon enveloping) a town of 4000 into a behemoth of industry with 200,000 workers. 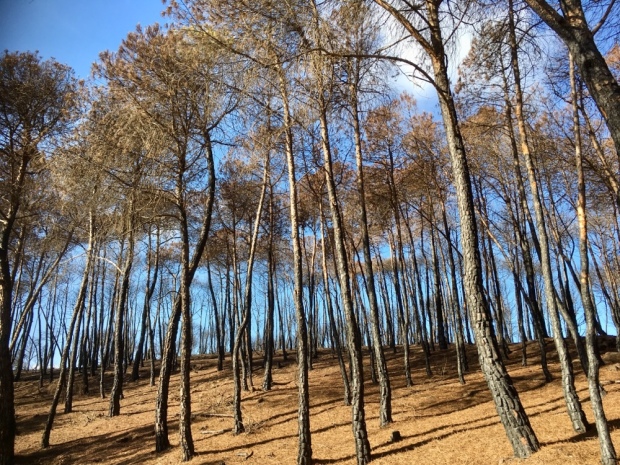 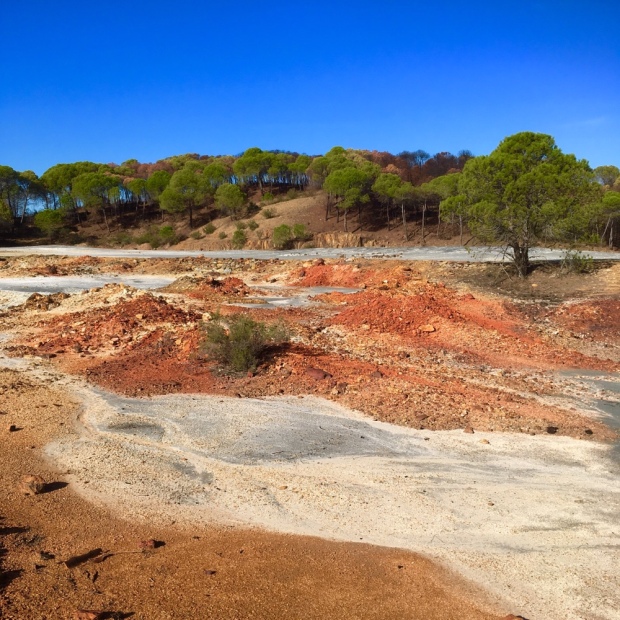 All very weird, and it got weirder when we drove down to Riotinto town and stopped at the source of its namesake. The river waters are full of copper and iron oxide and sulfuric acid and other lovely things, something I didn’t know when I tasted it! 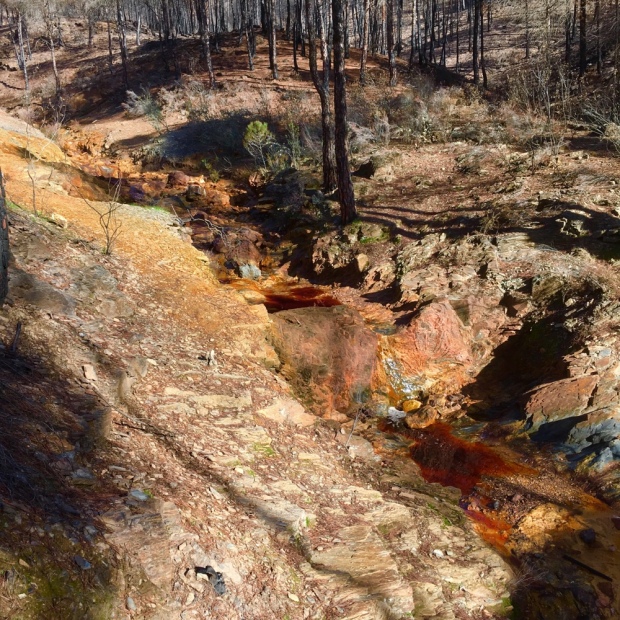 I suppose the danger/ stop shade of vivid red should have warned me. The strongest taste I’ve ever had the displeasure to rapidly spit from my mouth. I found out later the stuff can dissolve iron and has a ph of around 2. 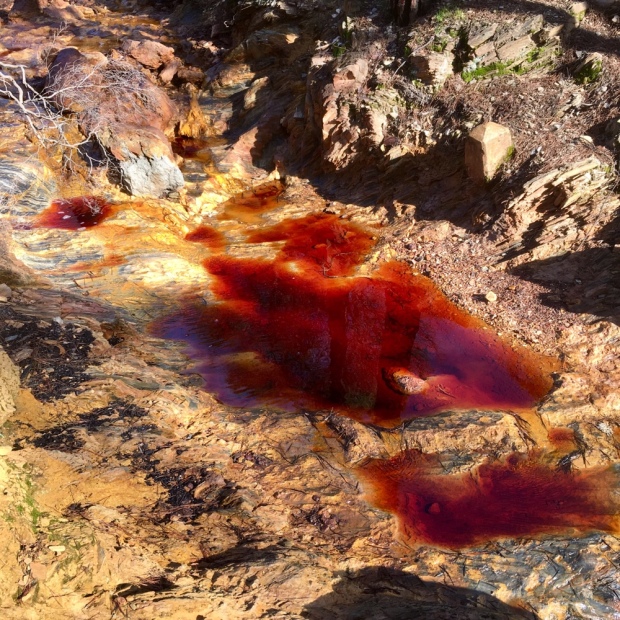 In fact it’s so inhospitable to life that NASA have been studying it, and the surrounding toxic landscape as a Mars substitute. And actually, even though no plant, amphibian, fish, insect or mammal can survive in it, micro organisms that can have been discovered there. So Mars could be full of similar. Maybe. 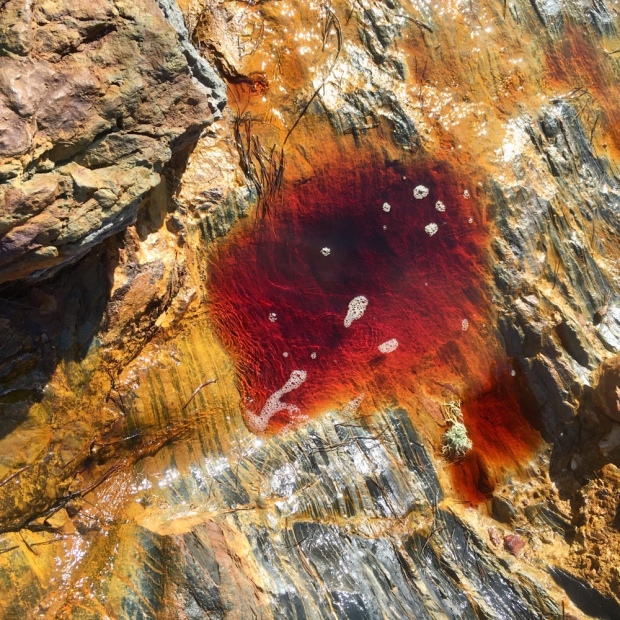 We visited the museum in town for an exhaustive exhibition of the history of the mines and the exploitation of the earth and local people wasn’t something to celebrate but there were some pretty rocks.

The British Bosses had built themselves a little separate enclave modeled after an Edwardian village and named Bella Vista. There, at the English Club, they could enjoy the lifestyle of the Home Counties and play croquet, cricket, polo and tennis. And Riotinto was not only home to Spain’s first golf course but also it’s first football pitch and is where the game was first introduced to the Spanish.

So the legacy of the mining activities is not just a hugely polluted landscape and watercourse all the way the the coast and beyond but also the “beautiful game” of Barcelona and Real Madrid.

Anyone wanting to make an ” end of the earth” sci fi/ horror movie could do worse than come here and our next location was perfect. A few Km north of town on the way to Aracena lay the Embalse Gossan and here the out of this world cranked up a notch.

Water levels were low, revealing strange mineral encrusted life forms. Trunks and branches of long dead trees and stalks of amazingly surviving reeds were coated thickly in ? And the orange mud surrounding them was worryingly quicksand like. Not a way I’d wanna go. 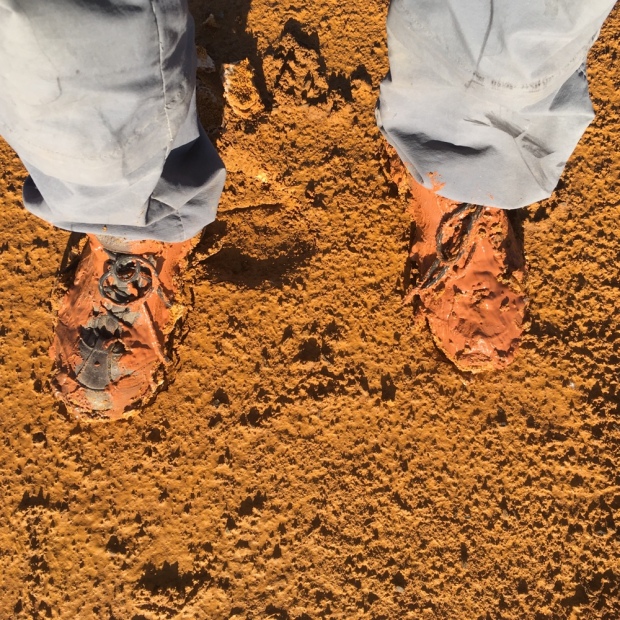 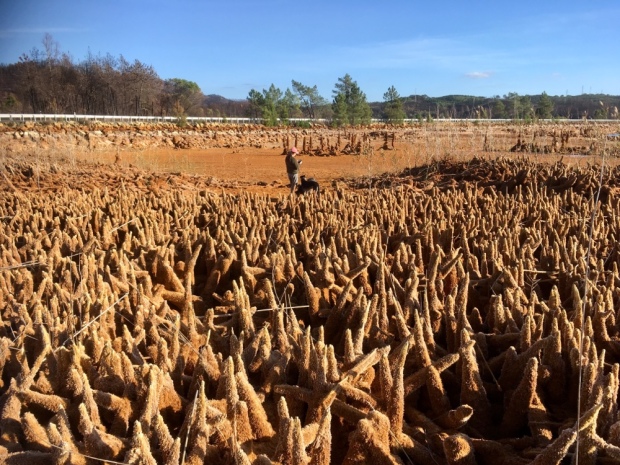 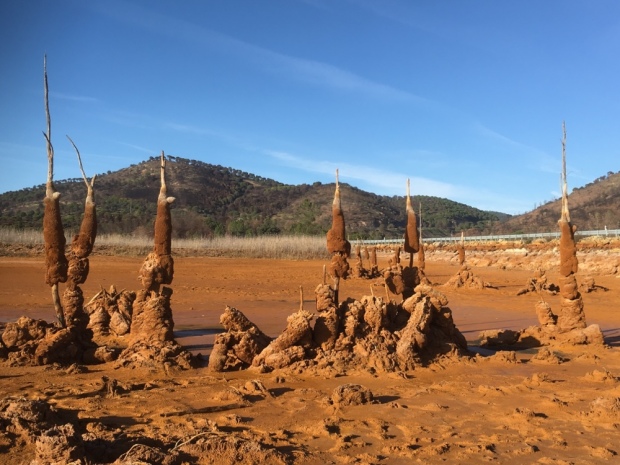 And another strange thing was that footprints left in the muck we’re not indented – but raised!

One other disquieting thing before I finish this post. While looking at Google maps satellite view of the area I spotted a funny landscape/ crop formation next to Pena de Hierro, so I went for a look when we were camped there. It’s miles and miles of orange grove on terraces around the mines.

We’d heard trucks up and down to it half the night. I found a car park full of pickers cars. It’s harvest time and there’s a big area to pick. Huge operation.

Turns out it’s all RioTinto fruit. Europe’s largest citrus farm at 3000 hectares. They are big into the use of Boron in agriculture. Boron is one of the common minerals in the spoilheap landscape. There’s also lots of unpleasant ones.

A lot of RioTinto Fruit is classified as organic. Tesco buy their organic oranges from there. Just saying.