Gluttons for punishment and intent on spiritual redemption we were catching a 6 am bus to Takijiiri- oki to begin the most popular of the Kumano Kodo pilgrimages. The Nakahechi main route takes 38.5km to reach Hongu Taisha from where, traditionally, it continues another 27 km to Nachi Taisha to the south, although nowadays people often stop at Hongu. Not us of course.

Waiting for the bus outside our lodging we got a hot coffee from the vending machine and watched the light pick up the sulfurous steam rising from the waters of the river that ,as we arrived the previous night, were enjoyed by bathers in their dug out hot pools.

Riding a Japanese bus is a very efficient experience with a payment system that impressed. You take a numbered ticket on entry. There is an electronic sign with all the numbers on and their appropriate fares owing as the journey progresses. So when you alight you read your number’s fare and put your ticket and money in the machines. And the drivers wear smart uniform with hats and gloves.

So the busy roads and villages made us realize we were now in a different environment to the empty wilderness of the Kohechi. The awareness was made more acute when we arrived at the trailhead to souvenir shops, coffee shops and other hikers.

So off through the Torii gates and massed shrines, past mighty roots,to the Tainai Kuguri ( meaning- to pass through the womb) cave entrance. It’s said that women who can squeeze through the gap are said to have an easy labour. So Sally had to have a go on a professional midwifery basis. 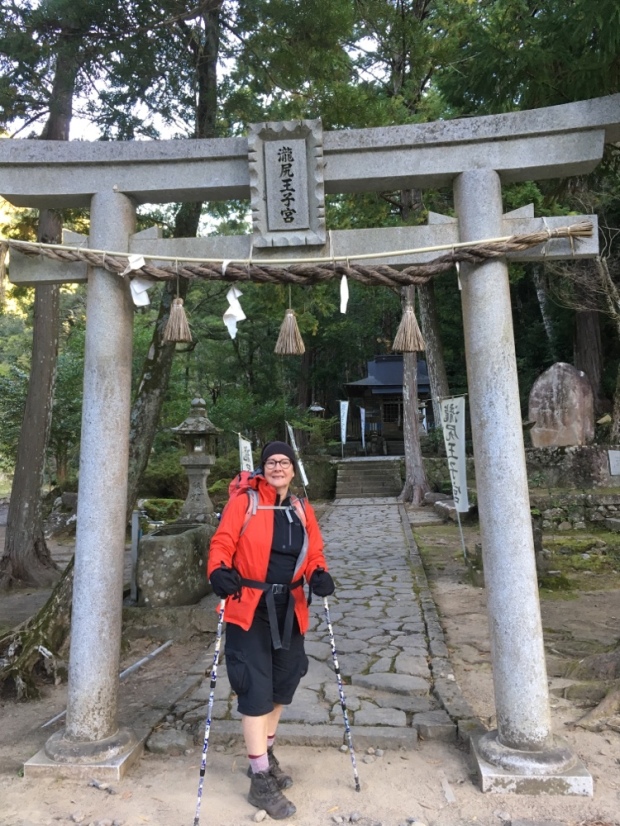 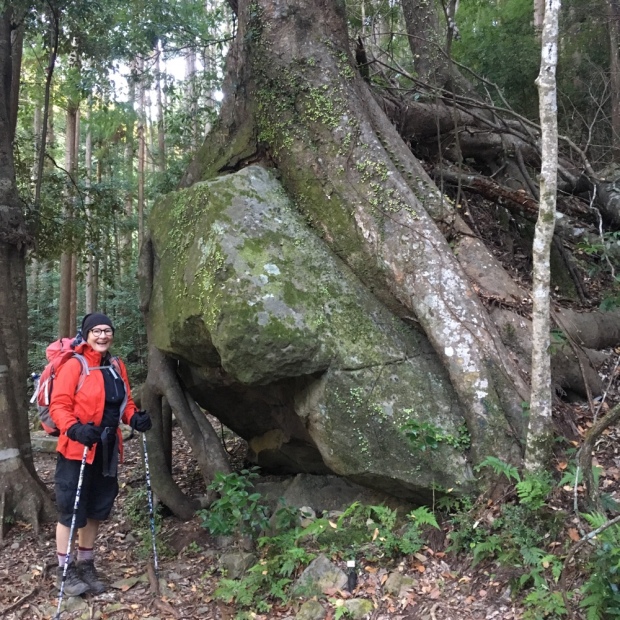 With the low hum of traffic in our ears we climbed up a steep and rocky hillside over prominent tree roots glossed by countless boots. More little shrines and waymarkers and a stretch of flagstone pathway running through a tunnel of greenery beside a road. I thought it well that the early roadmakers had not surfaced over this ancient thoroughfare as has happened in so many places. 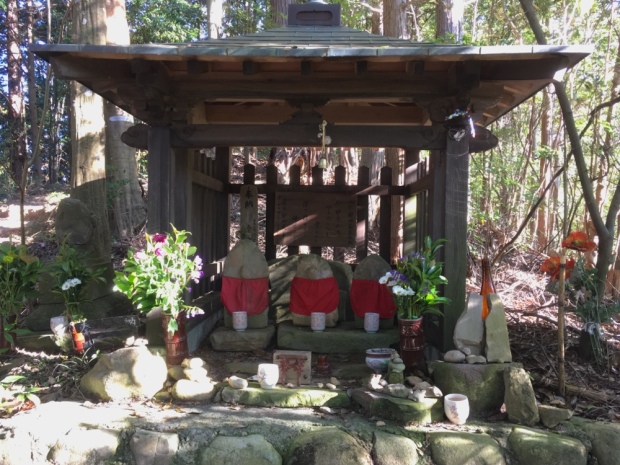 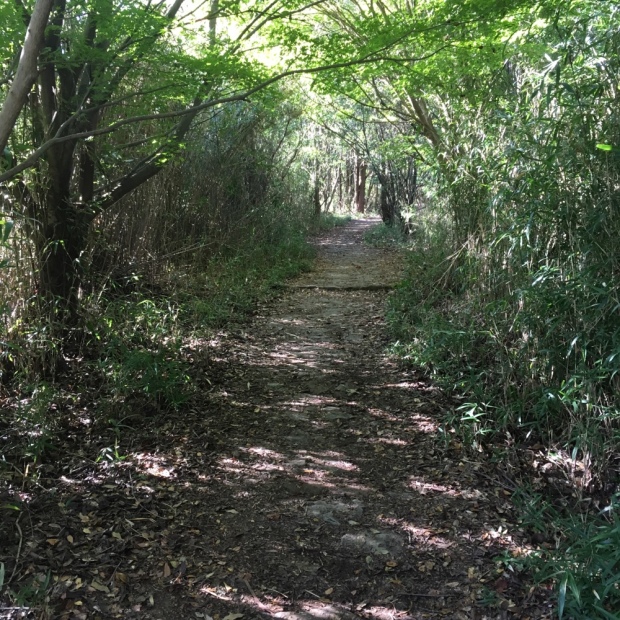 We were now getting hungry having had no breakfast. The guesthouse had turned our breakfast into a “bento” box of lunch and seeing the shrine figures all bibbed up couldn’t resist opening our parcels. Christmas was early! 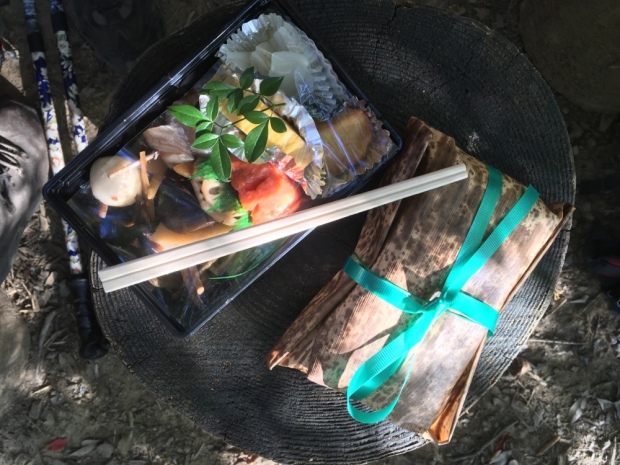 We reached the outsides of a village with signs for nice looking places offering accommodation. All so different from the Kohechi, but more varied I guess. It’s always interesting to us to see other cultures gardens.

We got to Takahara Kumano- jinja , the oldest shrine on the whole route, stood over by a 1000 yr old camphor tree.

We availed of the stamps for our new passports and walked on into the village where the big “rest area” overlooked picture perfect paddy fields whose thirst was quenched by a tall working waterwheel.

Past Takahara we climbed steeply into the mountains and away from any settlements for 8 km. There was a neglected cabin and shelter deep in the woods and a little while later a beautifully tranquil pond. Peace descended. 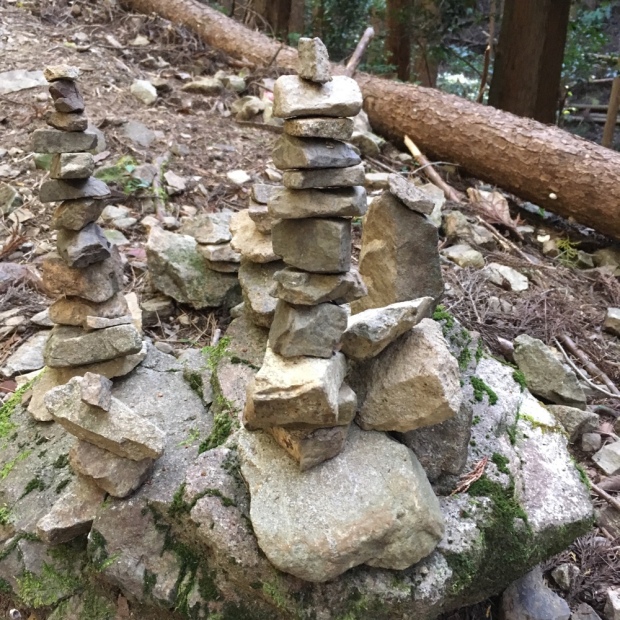 The serenity was somewhat broken at the Jujo-oji clearing where a large group of walkers were having a picnic and at the shrine and stamp box we had to queue briefly behind a bunch of Aussies.

We rose now on our final ascent to the high point of the day at the site of the Uwada-Jaya Teahouse (690m). We had passed a number of these little flat areas where for centuries there had been tea houses or inns to nourish the weary traveller or pilgrim. The trail now descended quickly, sometimes with steep switchback stairways of log stairs, to reach a small creek. We had noticed that this route had far more running water than the Kohechi and wondered about the micro climates going on around these complex crinkled landforms. 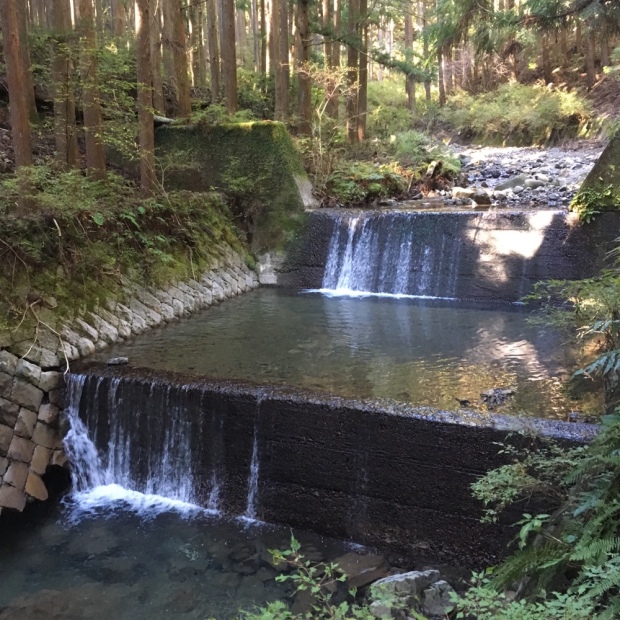 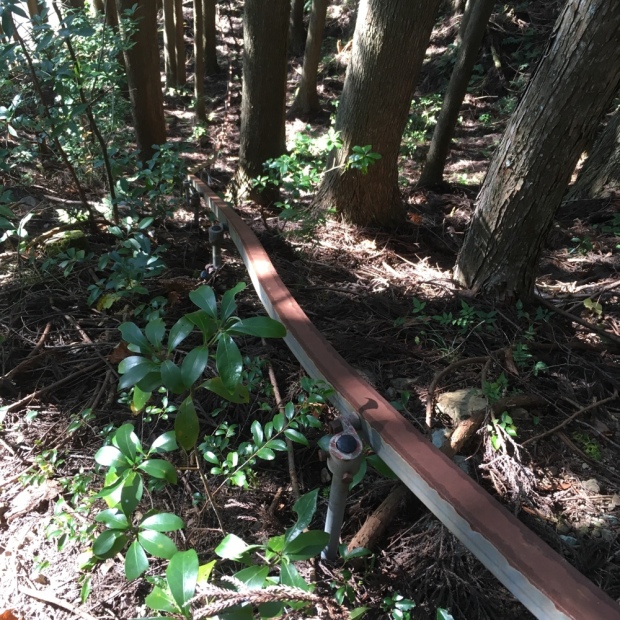 One of the above pictures shows a monorail track that snaked down through the forest. We’d seen one earlier at an old abandoned farmstead with a petrol engined trolley for bringing stuff up the steep slopes. I really can’t imagine how they do their forestry work out in such remote and trackless mountains. I’m not sure how much logging or harvesting goes on. We’d seen some in more accessible areas but in most places they had seemed to do a lot of thinning, leaving all the timber out there, often placed horizontally between trunks or stumps, presumably to help stop landslides. The remaining trees were then allowed to grow on to maturity(?) maybe purely to help with erosion. Good news for the planet anyway- there is an endless sea of cedar on this peninsular but as someone who has just spent a lot of money on a cedar ceiling and works hard to gather timber for fuel the vast amount left lying about was hard to deal with.

We continued down passing a rest shelter and picnic area popular in the spring for admiring cherry blossom and down into the largest settlement of the day at Chikatsuyu village. Nearly 1000yrs ago groups of up to 300 pilgrims would stay here and perform cold water purification rights in the river before worshipping. 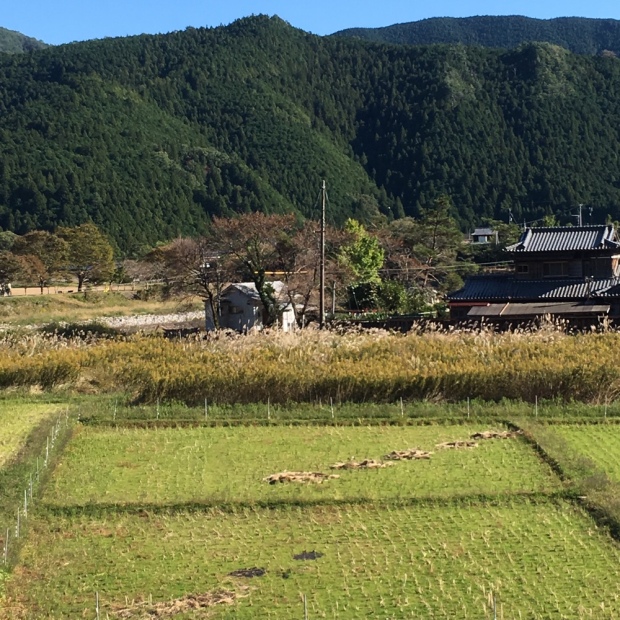 Climbing out of the village the views of the mountains to the east and south opened up as we climbed 200m mostly on tarmac on the old highway passing a sad number of fairly recently abandoned homesteads. Abandonment was a theme that resonated as we hiked through the area, both in the roadside settlements and deep in the forests where until the 70’s people were farming. Emigration to the cities and rural depopulation is a world wide phenomena and we were witnessing the Japanese story. 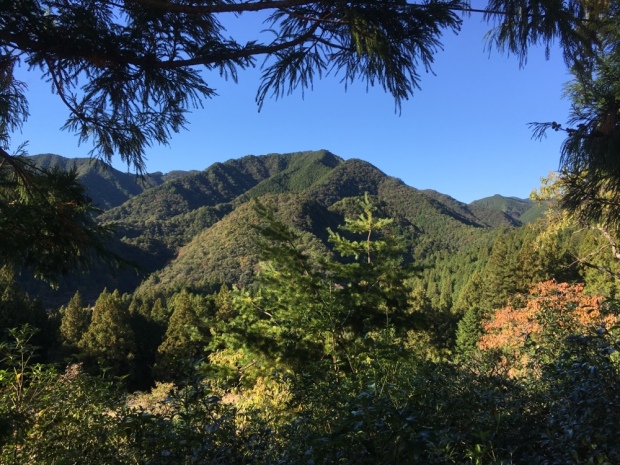 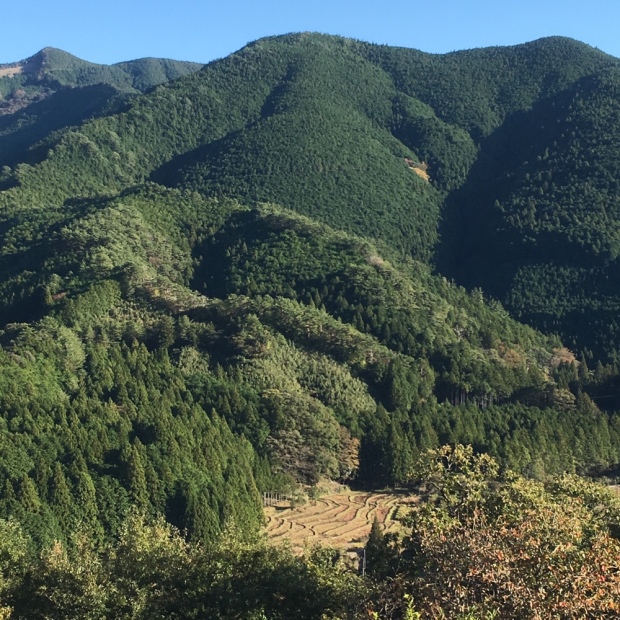 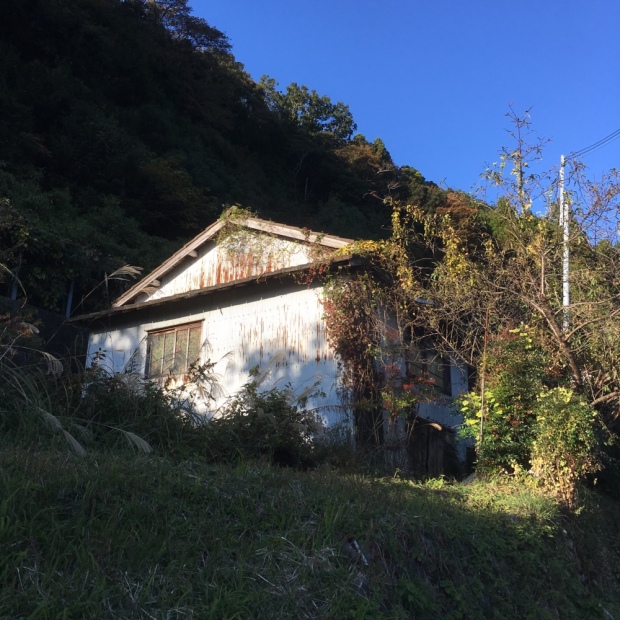 But then a cheerier side to the flourishing of this ancient route was shown when we arrived at the lovely thatched rest area with a traditional irori hearth, a chimney less fireplace for cooking and smoking all your roof timbers. Bad for the lungs but good for insect control.

The lovely ladies who volunteered there gave us cups of tea and little gifts of origami and chatted away in Japanese. We were in the shade of the giant cedar trees of the Tsugizakura-oji shrine. These 800 yr old trees, some with a circumference of 8 meters, were scheduled for destruction along with the shrine in the governments ” shrine consolidation ” program in 1906 and were saved by the actions of Minakata Kumagusu, ” an eccentric genius researcher and avant – garde environmentalist “. I like the sound of him!

There was a sacred spring here with healing waters that we unfortunately missed but we did see the ancient cherry tree with associated folklore and got the stamp to prove it.

Finally at Nonaka, after18km and 1200m ascent were our lodgings complete with goats. A couple from Tokyo had moved here 3 years ago to run a guest house and were doing very well. The world map wallpaper in the dining space was covered with pins denoting where all there guests had come from and it was very impressive. Good to see that like the Camino, the pilgrimage route can give new life to a declining rural area. 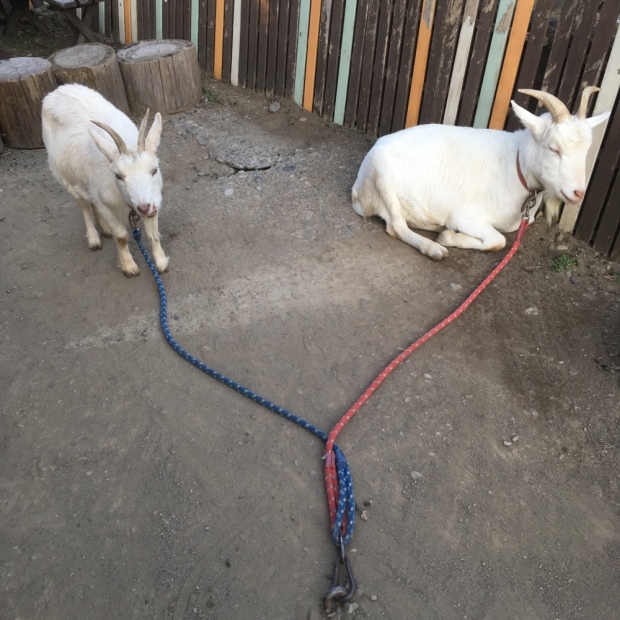 The finest breakfast so far set us up for what we thought would be a relatively easy day as we were starting at 500m even though the distance was the longest at about 20km. It wasn’t easy.

Continuing along the old highway now a quiet backroad past more neglected spaces awaiting rebirth we reentered the forest and were sent on a detour created after a major landslide after the 2012 typhoon. It was tough going climbing up and over the Iwagami-toge pass at 670m.

Then down again on soft forest tracks and log steps, passing more signs of now afforested old terraces,to eventually reach the valley floor again and the Yukawa- gawa river. Before crossing over we visited the beautifully situated Jagata-Jizo shrine where we learnt that travelers in the area are often overtaken by Daru spirits, serpent like witch creatures capable of taking an invisible form, penetrating the human body and inflicting fatigue and painful torment! They had me.

Crossing the river on another log bridge we began yet another climb, passing another old tea house site and checkpoint where from the 15th century a toll would be inflicted on pilgrims, up to what we foolishly imagined was the last pass of the day, the Mikoshi-toge at about 580m. 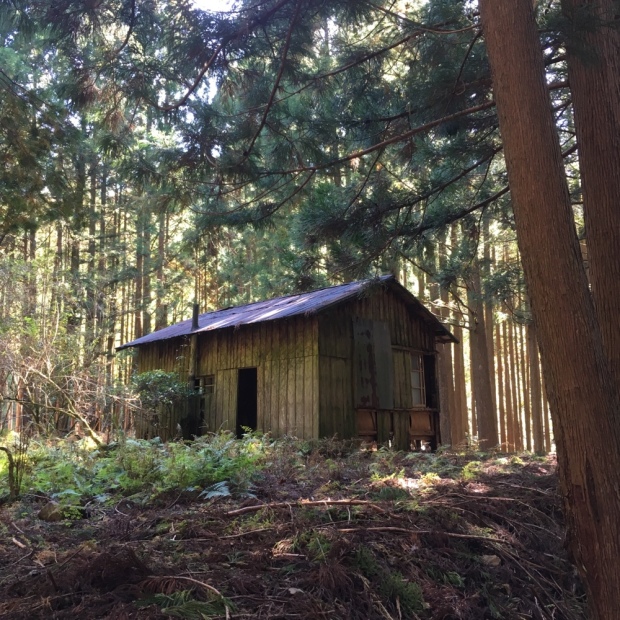 The site of the remains of the Doyu – kawa settlement seemed a somber place with the ghosts of the ancestors hanging about, as did the more obvious remains of the Michu-no-gawa hamlet where there were 17 households at one time. 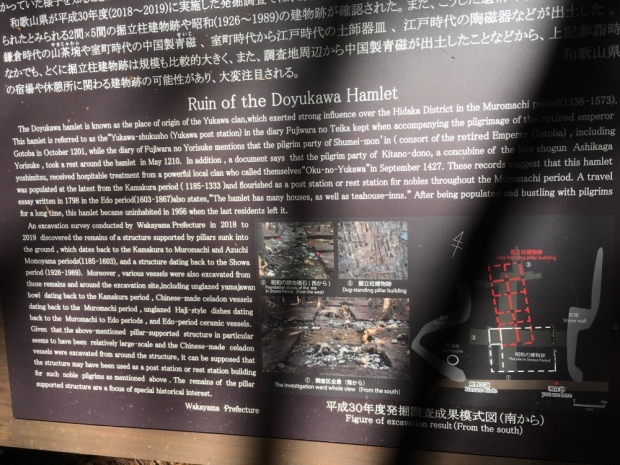 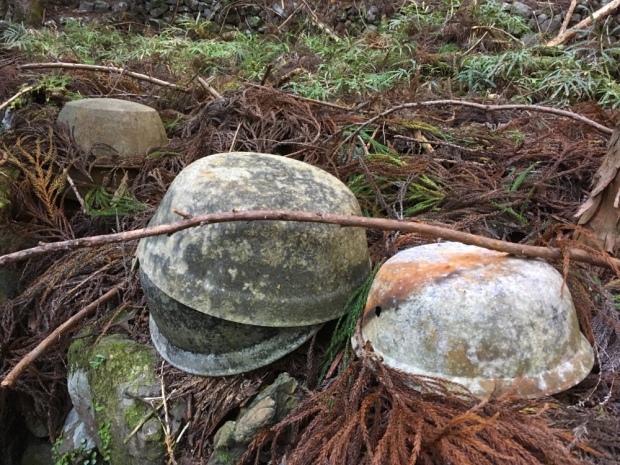 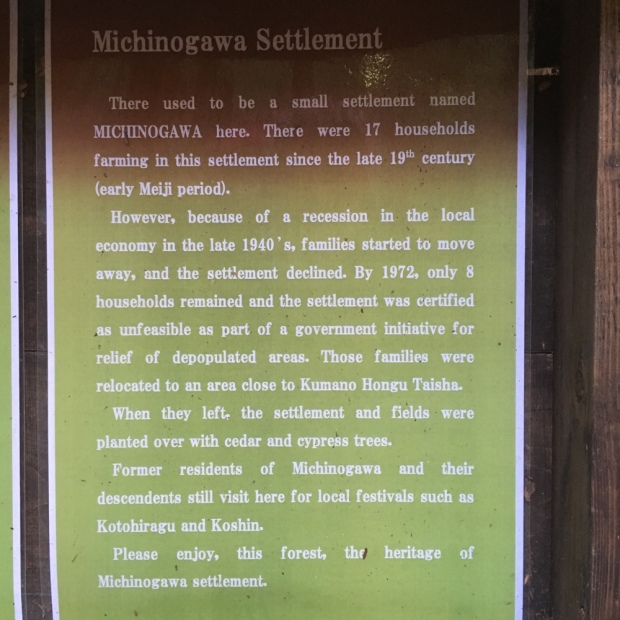 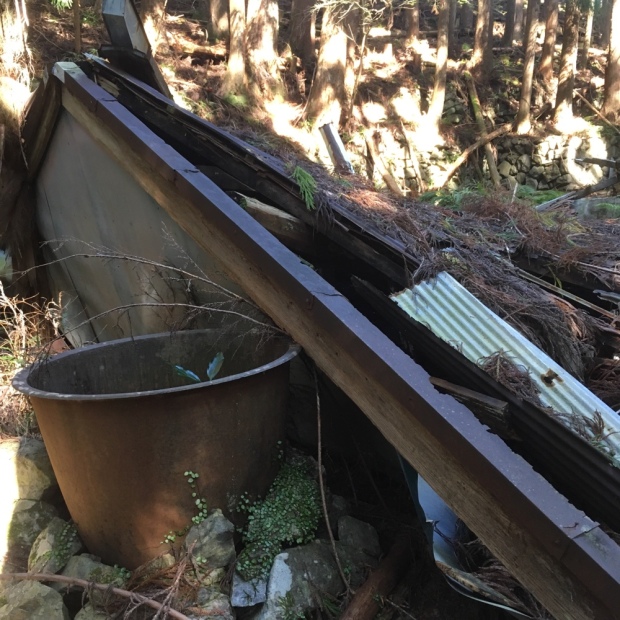 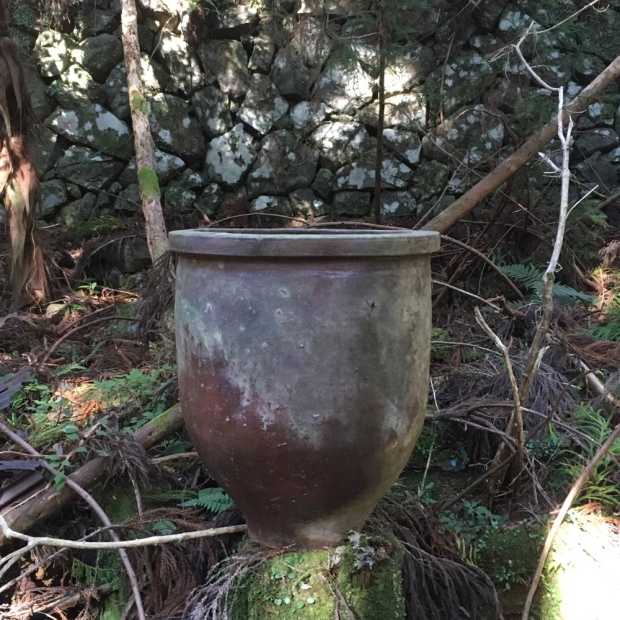 Soon after we crossed a large area of landslide management. A lot of this goes on and must cost the state a fortune.

We descended to the river Otonashi-gawa where there had been bad flooding that had taken out a bridge which meant there were diversions in place. The route to Hongu was sent straight on and the side route to Yunomine, where we were staying ,went right on the Akashi-goe trail. We went right. There was a lot of serious engineering work being done on the river and they had luckily installed a log bridge just days before that took us over the river to the start of a big slope. 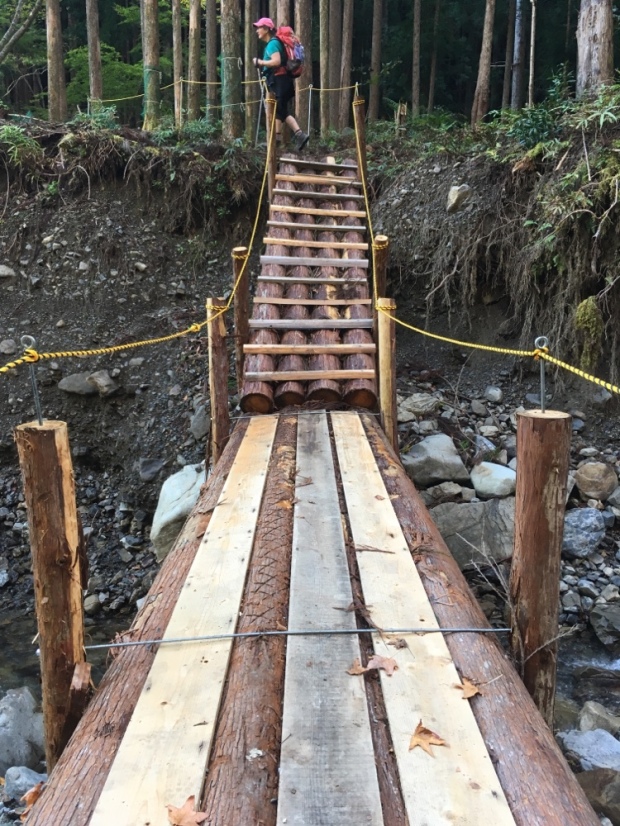 We should have looked at the altitude profile for this ” shorter” route. It must have been because it came at the end of a long day of ups and downs but the climb to the 450m pass seemed to go on forever. 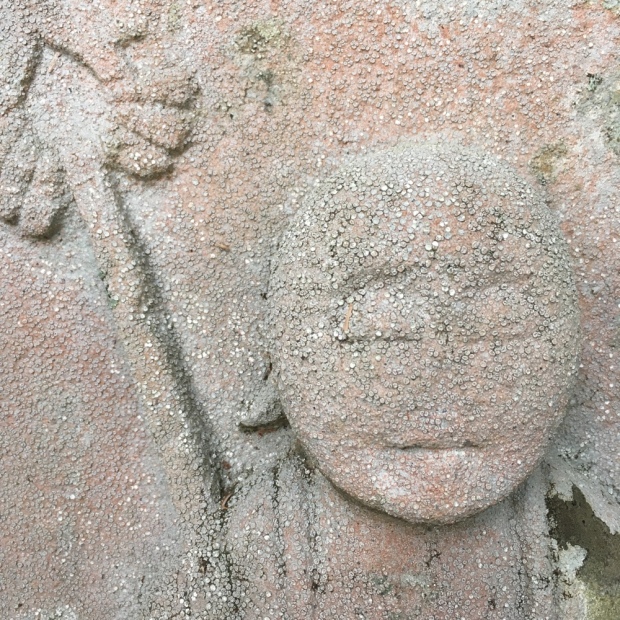 Claiming the summit at last we continued up and down along the ridge with occasional stunning views across the green cloaked folds and past another old tea house and cemetery finally given up to the forest in the 70’s.

The track got perilously narrow on the edge of a big area of felled forest and a view to reengineered landslip.

A carved waymarkers from 1855 pointed us down the trail towards the ” hell slope” where steep and slippy mud and flagstones took us down through the hot steam and sulphur smells of Yunomine Onsen.

Discovered some 1800 years ago and thought to be one of Japan’s oldest hot springs, the healing waters are pumped into a number of baths around the village including the tiny Tsuboyu Onsen, a World Heritage site. We got our tickets for it and quickly dropped our bags at the hostel, returning for our allotted 30 minutes of wonderfully restorative hot healing for our weary muscles.

It had been a tough one and we realized we’d been pushing it a bit with not enough downtime for seeing the offtrail sights.

So we decided to finish this pilgrimage at Hongu, in the traditional style, and give ourselves some time by taking the bus to Koguchi. The weather was forecast for rain so the timing is good.

So we will now visit the three major sacred shrines of the Kumano Kodo, the Kumano Sanzan, the Hongu Taisha, Nachi Taisha and Hayatama Taisha in Shingu and I’ll get back to you. 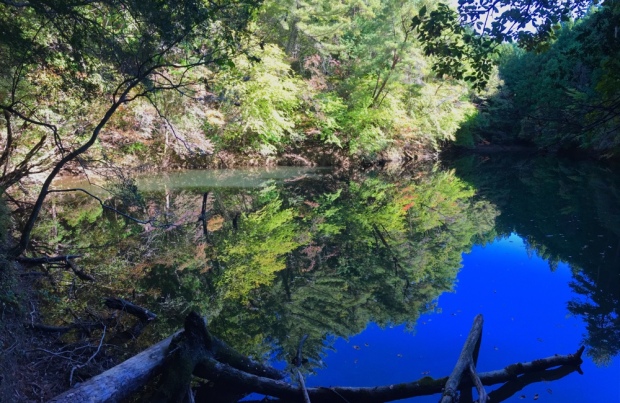