We had a long day planned from our comfortable caravan so headed out early well rested. The usual raucous whoops and screeches of the birdlife dawn chorus accompanied us out of the town through new build suburbs of designer houses and expensive plots. It all seemed pretty affluent and most of the houses were very smart with clean lines and shining materials. A plethora of Archetect designs to protect from the sun and not the rain. 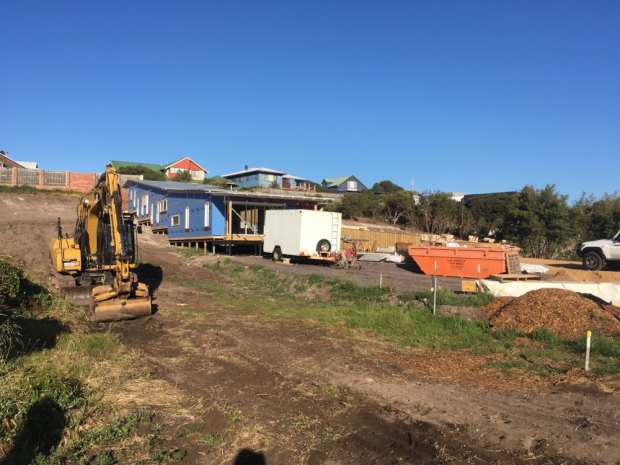 Soon enough we were back out in unadulterated nature though, a rare enough experience when nearly all landscapes have been shaped by mankind. But I suspect that’s these coastal environments have remained untouched and would have appeared the same to the European arrivals some two hundred years ago. In fact some of the plants here, like the grass tree, have been the same for 100 million years! The diversity of plant species is astounding, all the more so because at first glance or from a distance it all looks similar. In fact this region is one of only 34 ” biodiversity hotspots” in the world and the only one in Australia. One piece of parkland that was surveyed was found to have over 8000 species, 47 percent found only in southwestern Australia. 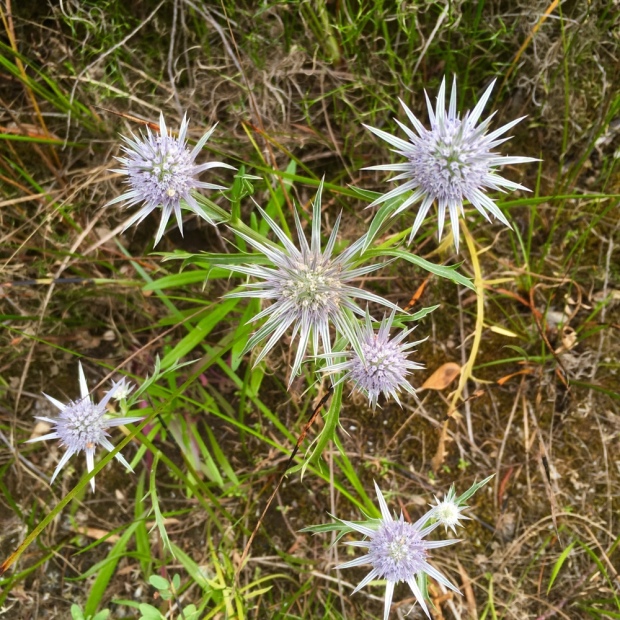 We got to the beach before 7 and already the surfers were out. This coastline has world famous breaks and there are certainly a lot of very dedicated boarders. The beaches are vast and they will carry their boards a long way in search of the perfect wave. We had to carry our packs, now thankfully a bit lighter, for about 6 km across soft and sinky sand to the end of Redgate beach where we turn up away from the blue and into the green. 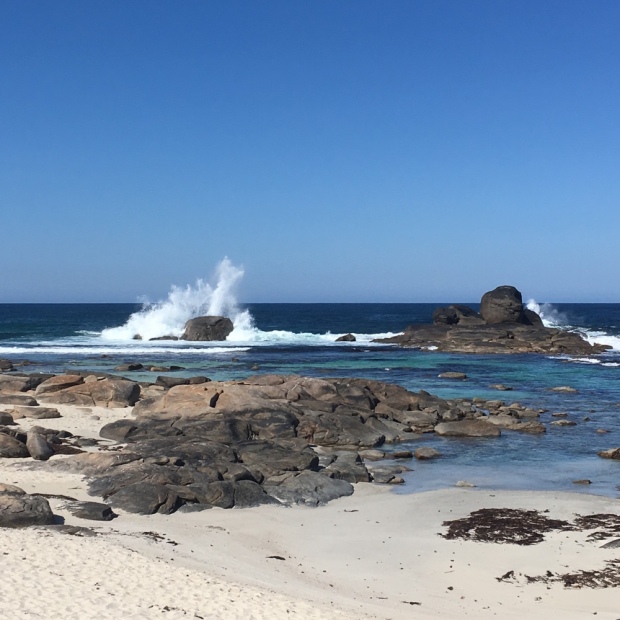 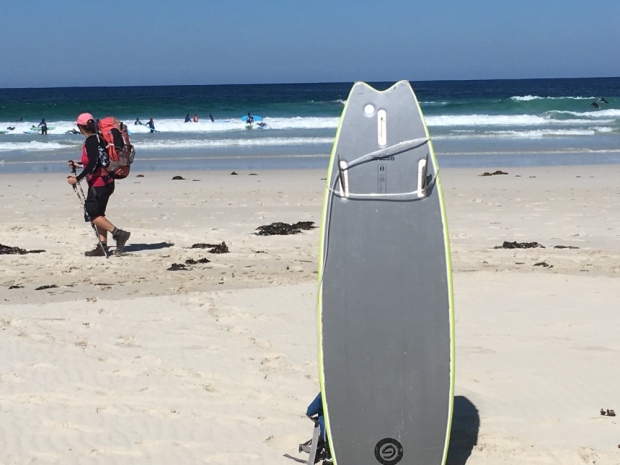 We clambered back down to sea level briefly at Bob’s Hollow, an impressive limestone cliff band and weirdly shaped cave popular with climbers. This section of the trail was thought of as one of the nicest and is popular with walking groups but I suspect that’s because there are routes accessible to ordinary vehicles. At Redgate we had come across a bunch of well dressed hikers alighting from a ” Walking into Luxury” coach. A somewhat different experience! 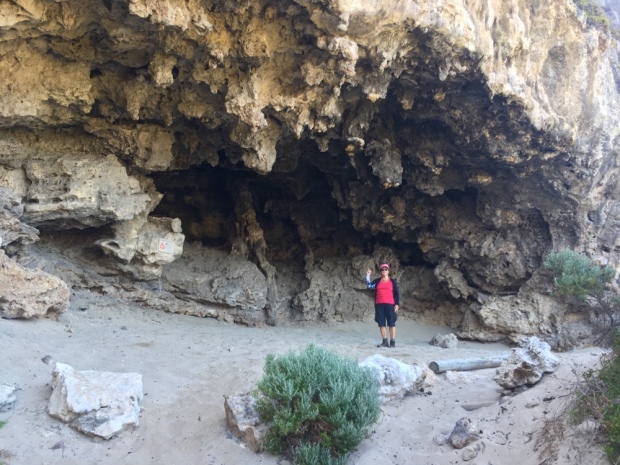 Back up to the top of the cliffs to continue through the tunnels of greenery with occasional views of the beaches and seascapes that drew gasps of amazement at the intense beauty of it all.

We had reached Conto Campground, a D.E.C ( Department of Environment and Conservation) fee paying campsite with over 100 pitches spread over a big area of bush. We stopped here for water for the next 24 hrs and to rest up for awhile in our flysheet less tent. (It had weighed too much!) We read about the vast Leeuwin Naturaliste National Park, had our last dehydrated dinner and lay down looking up at the trees and birdlife through the tent.

A hot day, so we were grateful to be heading off into the forest shade. Miles of beautiful protected Marri, Karri and Jarrah gum trees awaited. We were having to split the remaining distance of the trail to get to the last camp the following night, in order for the final 18km to be covered on the final days trek. So we were hoping to find a place to stealth camp that night as we set off down a 4×4 track. 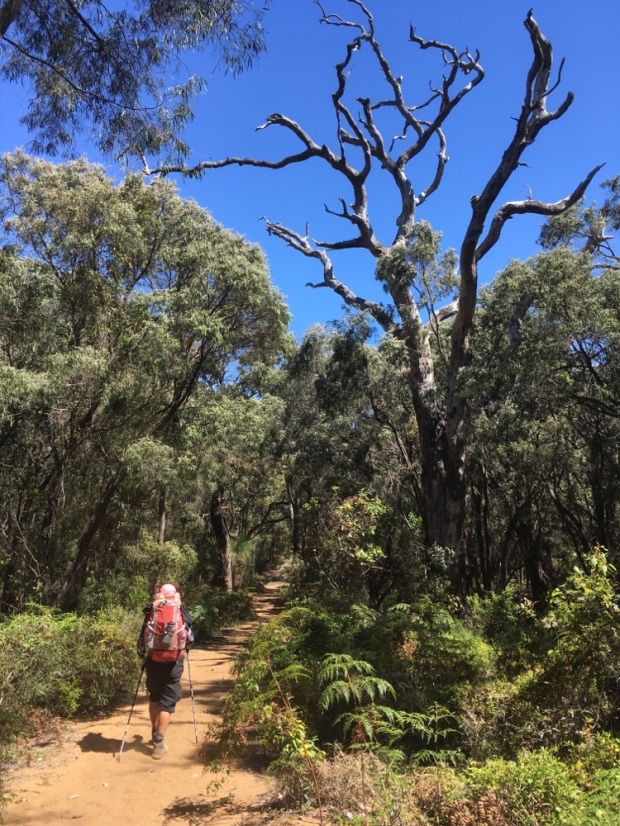 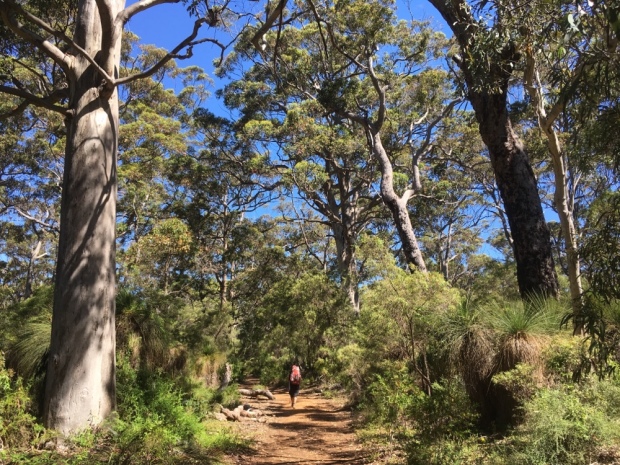 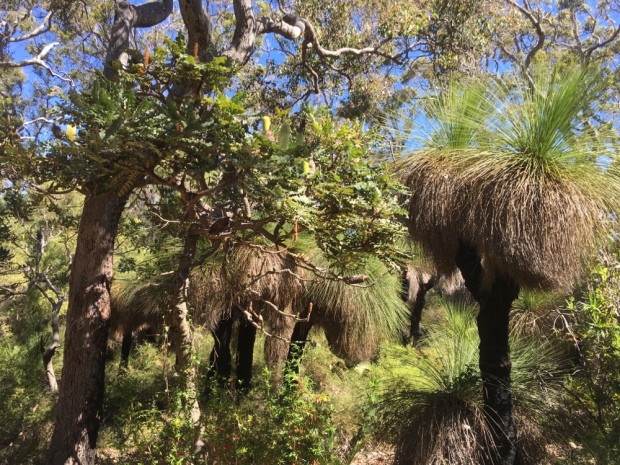 The trees were magnificent. The Karri is the third biggest tree species in the world and that and Jarrah had created a big timber industry for the first European settlers although how they managed to fell the massive trunks of hard and heavy wood was beyond me. We passed many a burnt and hollow trunk and one tree with a very active colony of bees before climbing to the tracks high point at Boranup Hill Lookout some 200m above sea level, where the wooden tower afforded us a fine view over the forest and sea for many miles. 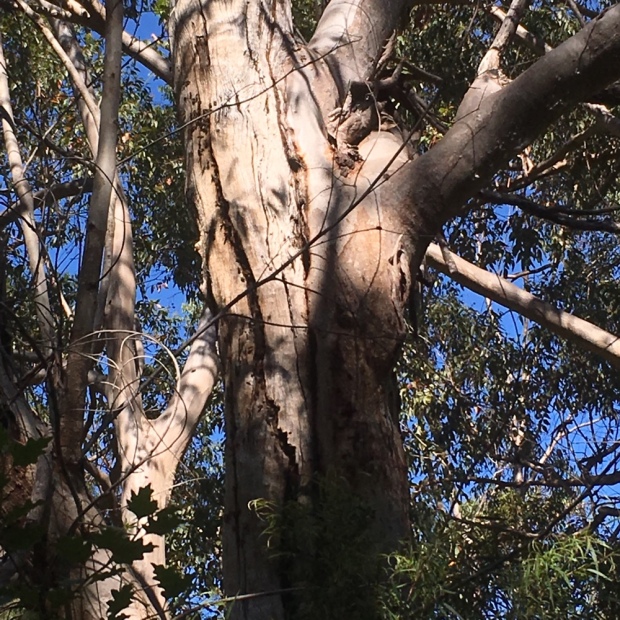 A meager dinner of peanut butter sandwich and our last tea bag ( walking into luxury this was not!) and we retired to bed hoping the forecast for a 40 per cent chance of a shower did not materialize. It didn’t, though the morning was cloudy, a blessing with a long stretch of unshaded beach walking to do.

It was about 4km back down to the sea, disturbing more grazing roos beside the wide track. 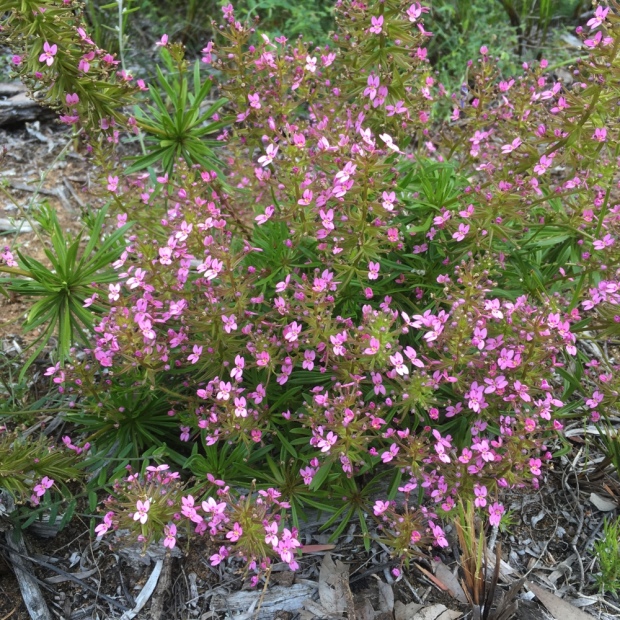 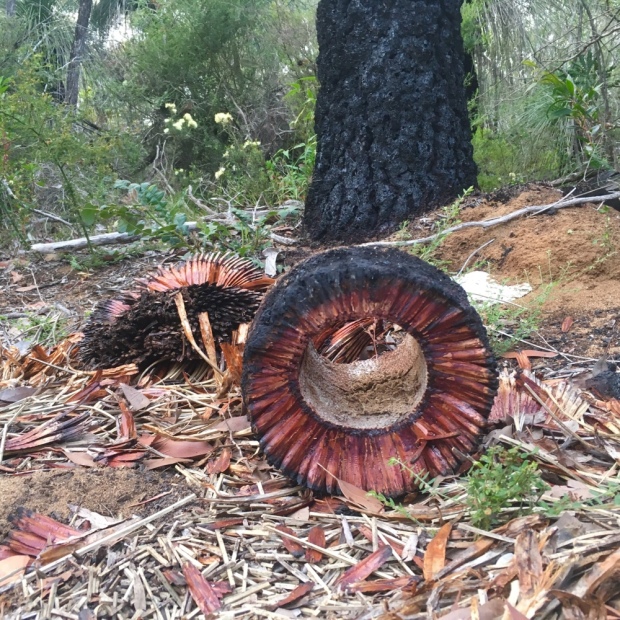 And then, still early, we hit Boranup Beach, praying the sand would be firm.

It was- praise be- and we were able to make good progress across a white wonderland. Never have I seen such pristine sand. Stretching to the horizon in an unbroken arc of purity. Walking beside the blue/green waters without having to slog it out in soft sand was an unbridled joy that the photos cannot hope to reflect. It was beyond good luck.

We reached Hamelin Bay around 9 after a 6 km beach walk and hit the little shop at the caravan park for coffee, coke, snacks, water, pot noodles, baked beans, pies and other health foods a hungry hiker needs. Then a swim in the tranquil bay famous for its friendly sting and eagle rays that feed from your hand.

This was the site of a once busy timber export business, with a long jetty for ships to load Karri and Jarrah lumber extracted from the surrounding forests. 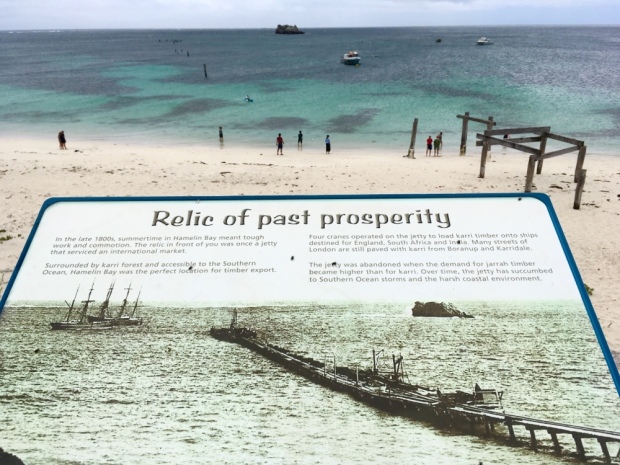 Rested and watered we set off again along a beach and then up the cliffs to rollercoaster up and down the sandy tracks through the scrub up to Foul Bay Lighthouse with an increasing number of annoying biting flies coming with us. The strengthening wind that started to sandblast us at least helped to blow the pesky swarms away as we crossed an area of gorgeous rocks. 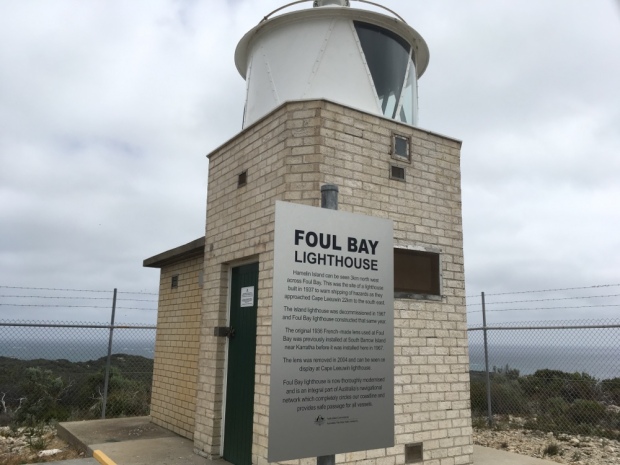 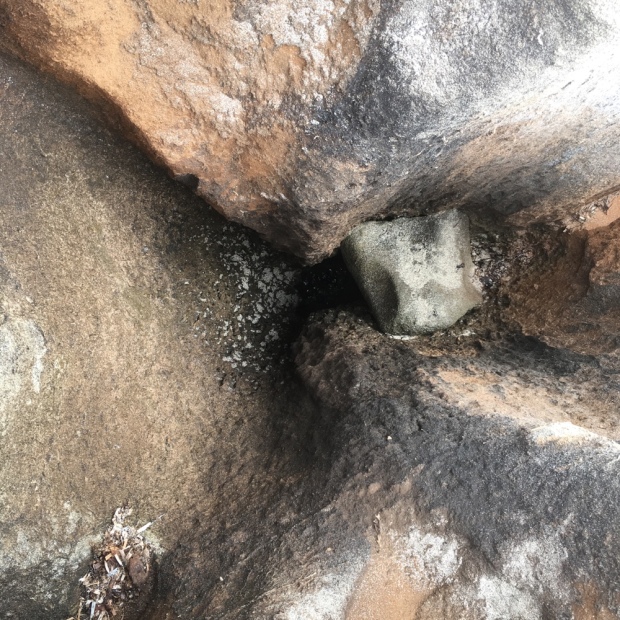 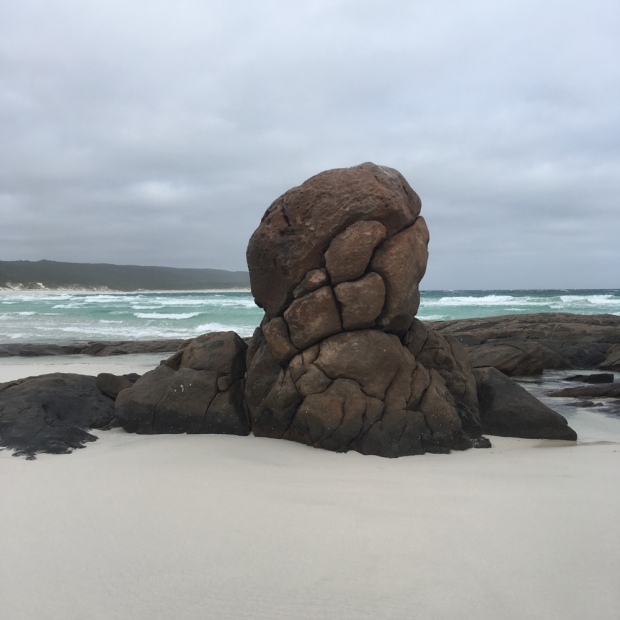 We really had to watch our step along this stretch with all the deep blowholes everywhere. We saw a sign to keep back from them,(impossible) as they can blast air and water 6 m high! More clambering over a variety of rock formations before moving onto Deepdene Beach for the last couple of Km before the turnoff to our camp for the night, 500m off the track deep in the tea trees and lush undergrowth. The wind had really picked up and we were sandblasted by the time we got there. 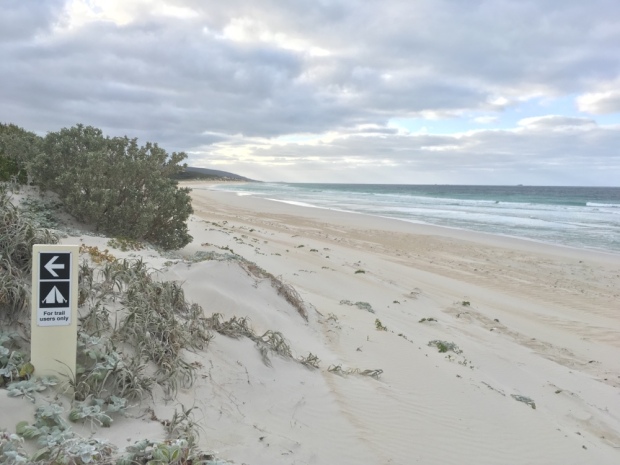 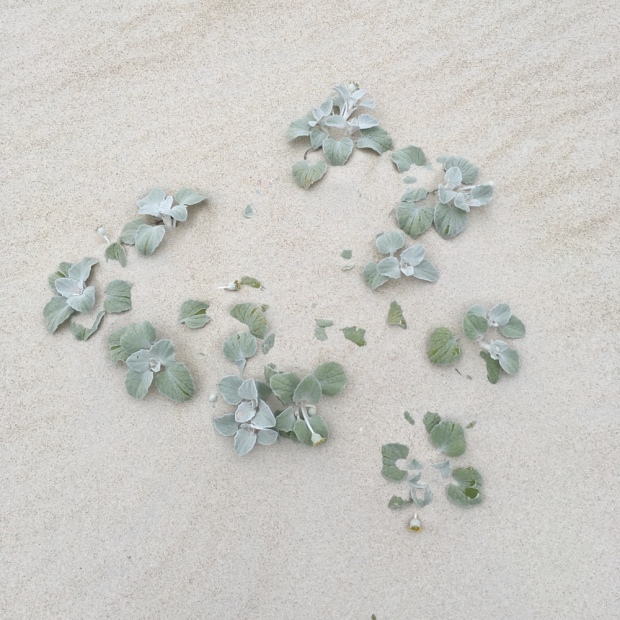 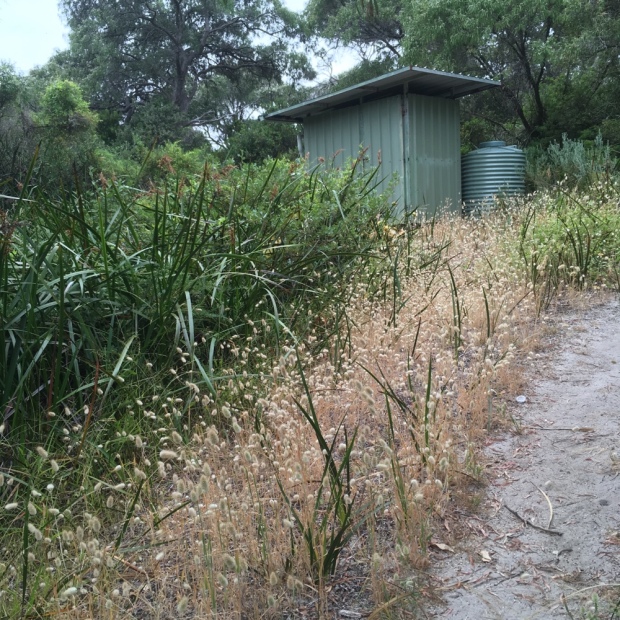 Our last camp of the trip was another pleasant place with compost toilet ( always fully stocked with toilet roll) water tanks and picnic tables and benches. A big shout out to all the rangers, conservation workers and volunteers who keep track and trail together.

Another early start to avoid the sun and wind on the Long Beach stretch to Leeuwin that we had read and been told was a hard slog through sinking sand in the face of strong winds. The gods were kind again, the tide was very low, allowing us to walk by the shimmering crystal waters on packed sand and admire multicolored seaweeds and more geological wonders. 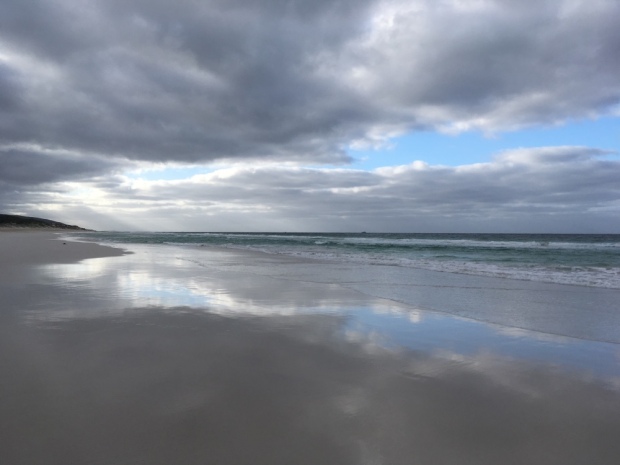 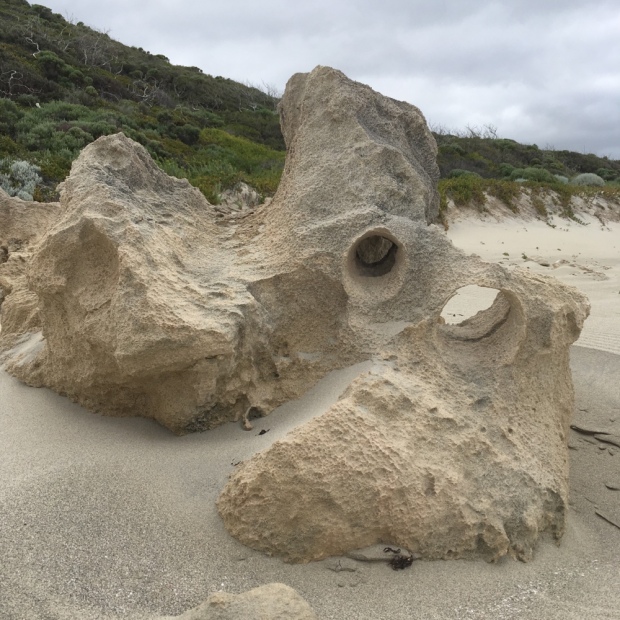 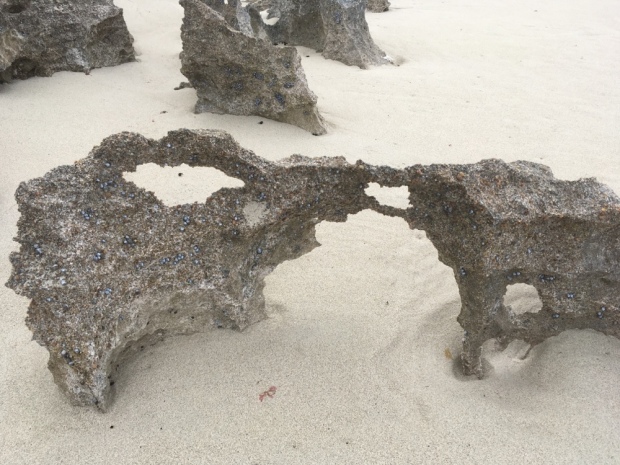 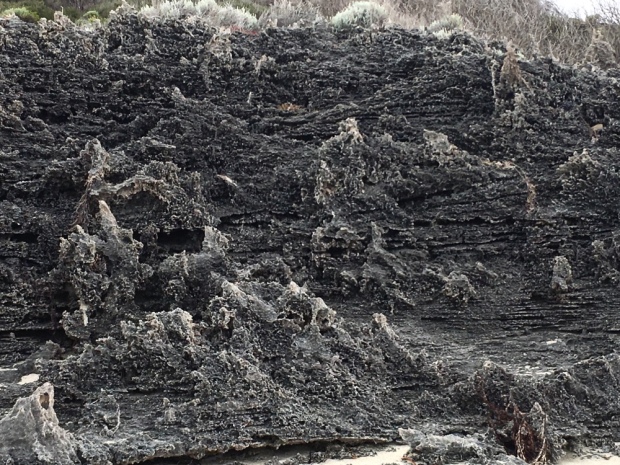 We left the beach at Augusta Cliffs climbing up, over and through high dunes of muscle aching sliding sand before gaining a stony path through varied wildflowers and scrubs with our final goal, the Leeuwin lighthouse, finally looking close after a day of minuscule enlargement on the horizon. 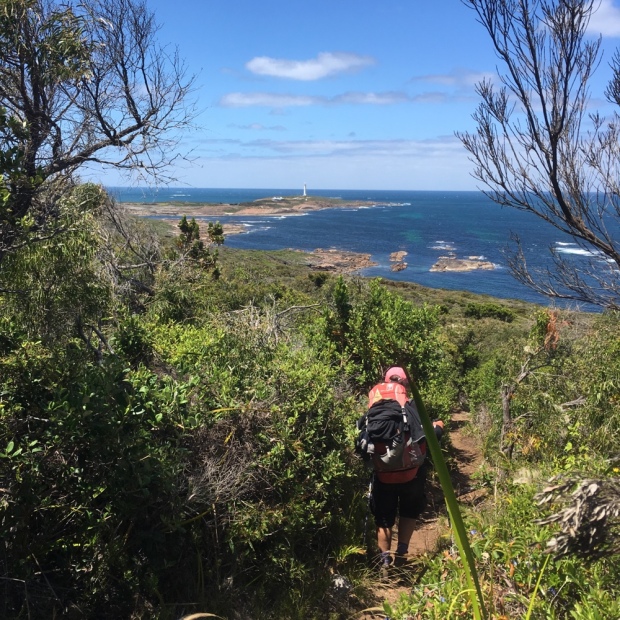 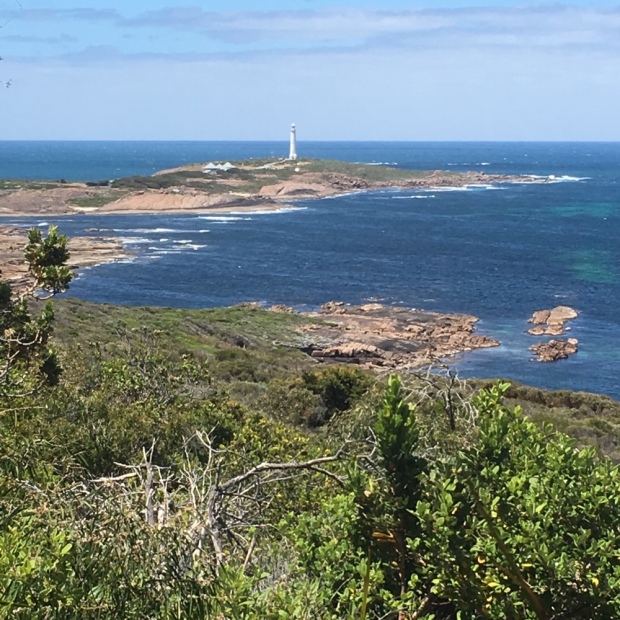 One last swim in the Indian Ocean just meters from where it collides with the Southern at a place called Quarry Bay where the stone was quarried for the construction of the lighthouse, Australia’s tallest. It also had bizarre mini cliff of tuffa rocks from calcium rich spring and groundwater leaching through the limestone. There was another example covering the old wooden waterwheel, made for pumping water up for the lighthouse keepers. 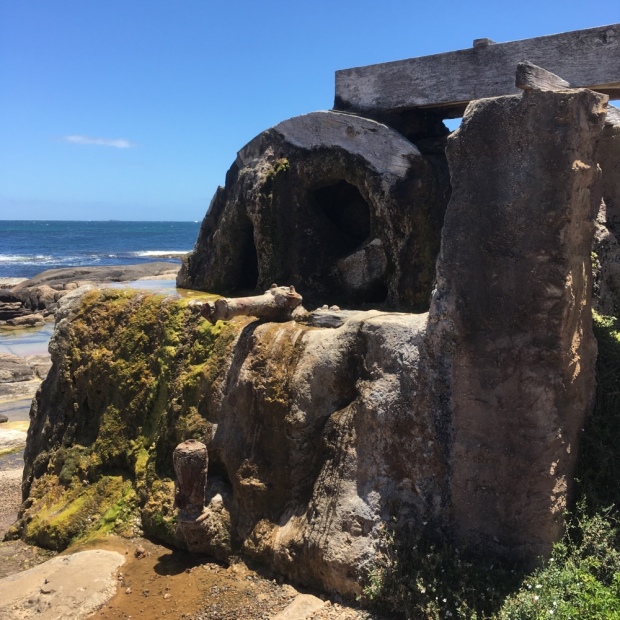 And that was it. By coffee time we’d finished our journey on the Cape to Cape and re-emerged into the world of tarmac roads, taxis to motels and 6 hour bus rides back to Perth. A stunning hike through a really natural world of coastal scrubland, towering forest and the biggest, most beautiful beaches I’ve ever been blessed to witness.