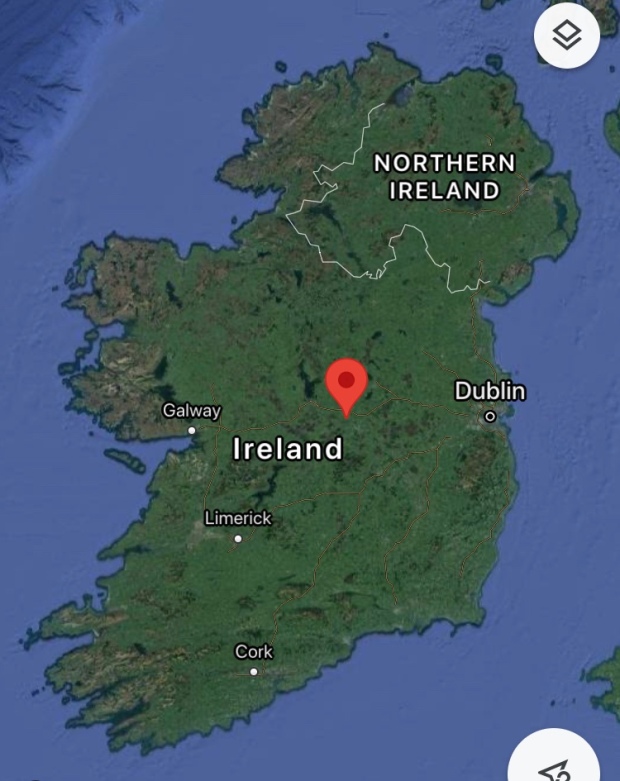 I dropped a red pin into the heartlands of Ireland. Not quite dead centre and actually more Ancient East than Hidden Heartlands according to tourist board marketing.

We were off to explore Clara Bog and the native woodland and esker country beside it on the Ballinough Doorey Loop. 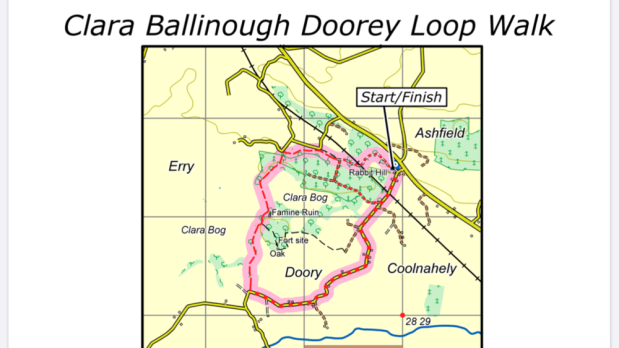 One of the few raised bogs in the midlands not fully exploited, and now protected by a wealth of environmental designations, we’d been before to the visitor centre in town and the 1km timber boardwalk that loops across the quaking quagmire of mosses, bog cotton and exotic carnivorous plants. The 450 acre nature reserve contains all the poetic forms of raised bog – hummocks, hollows, flushes, lawns and unique soak systems. 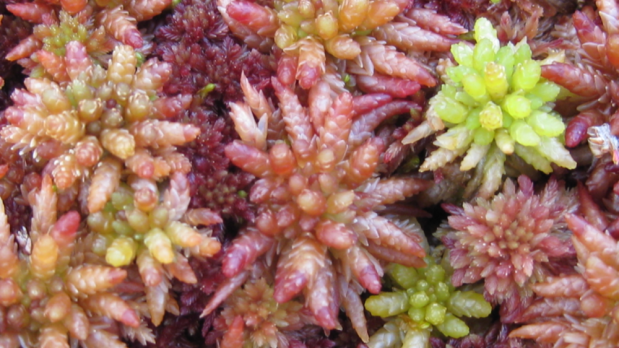 Taking advantage of the free travel pass afforded by my senior citizen status we let the train take the strain and arrived at Clara station after a relaxed hour gazing at the passing greenery. 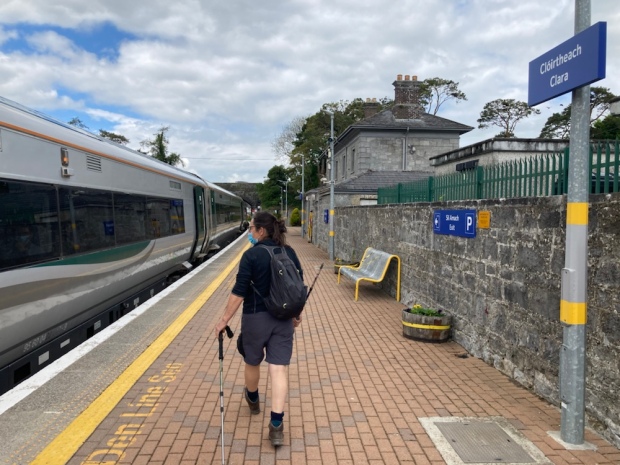 From there we set off through the town on the Tullamore road to join the loop a couple of km away. We were confronted with vast derelict industrial buildings and discovered later that a Quaker family, the Goodbody’s had created a dynasty of benevolent employment in a succession of flour, flax and jute mills and textile factories helping Clara to be one of the only midlands towns to increase in size between the famine and independence. 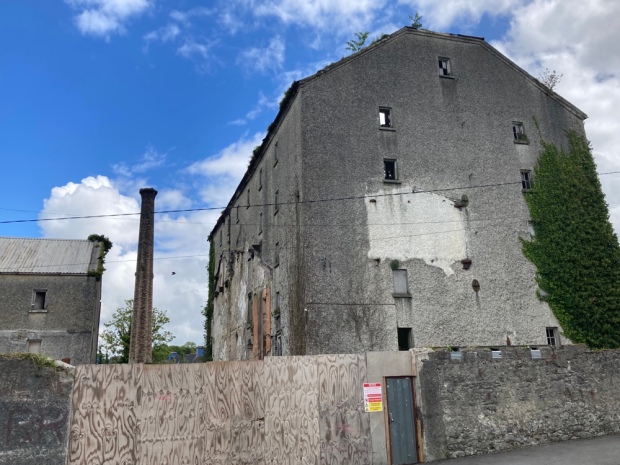 The river Brosna runs through the town ( and powered all the mills ),as did the Athlone to Tullamore railway which transported all the goods produced, and by 1890 the Goodbodys employed over 1000 people many living in company built housing. 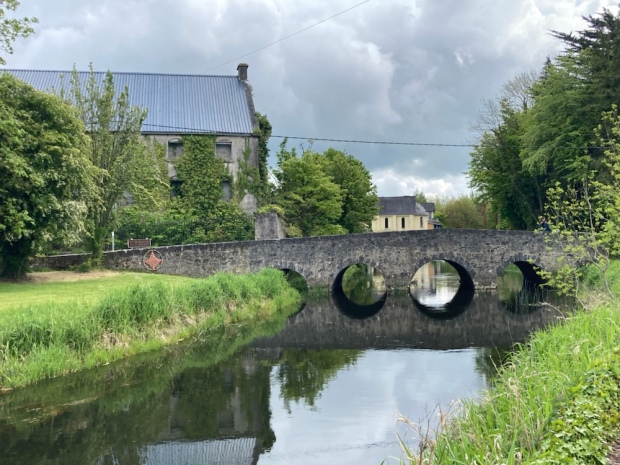 The family themselves lived in Inchmore House, now sadly deserted and becoming derelict, for sale with 20 acres and the adjoining Quaker meeting house. 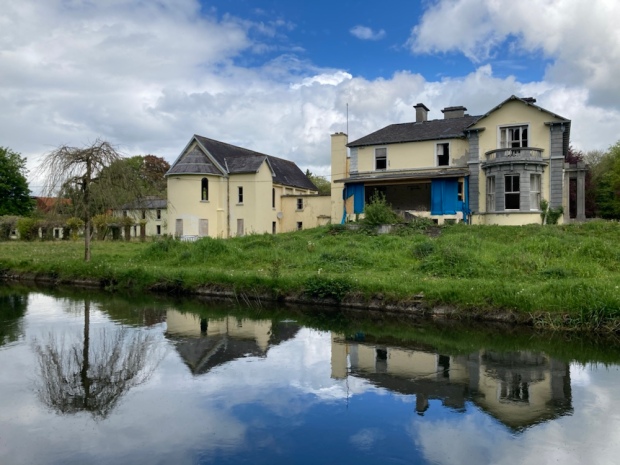 Escaping the traffic on the busy main road we took to a lane that led us alongside the railway and an esker the area is renown for. The Esker Riada is the system of ridges of boulders, gravel and sand left by retreating glaciers that stretches from Dublin across to Galway. 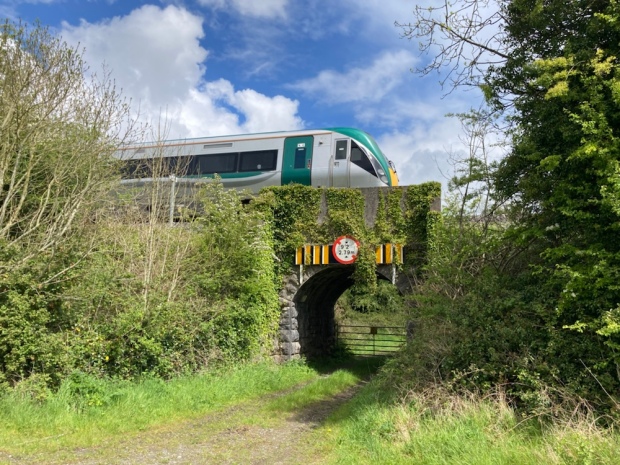 Acting as the main east/ west highway for hundreds of years the elevated dry ground was a sure way across the sodden boglands of the midlands with an historical and cultural significance that has prompted Offaly county council to push for it to gain World Heritage status. 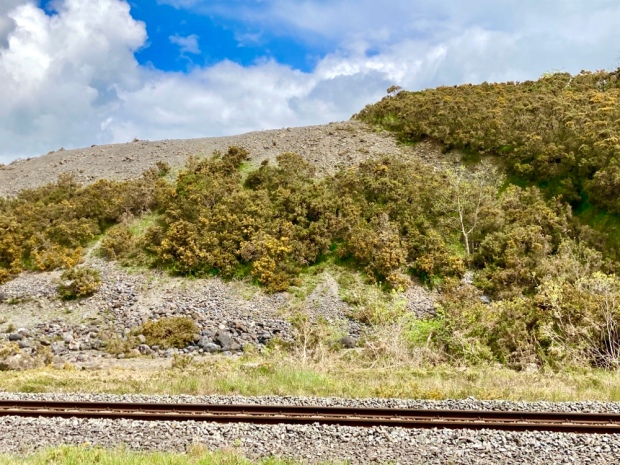 We soon turned off onto the official looped walk and set off through naturally regenerated woodland on what may have been old tracks laid down for turf extraction. 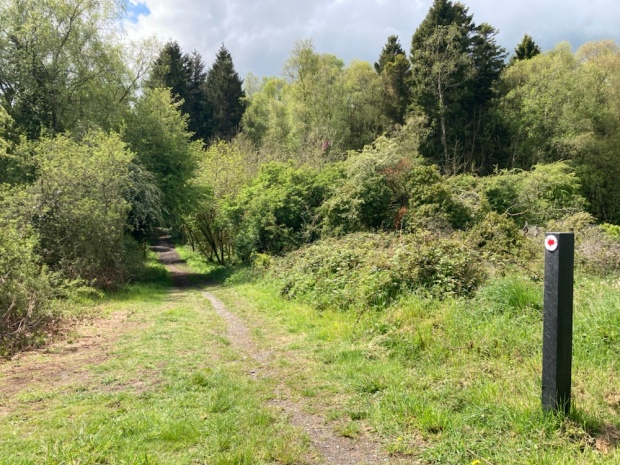 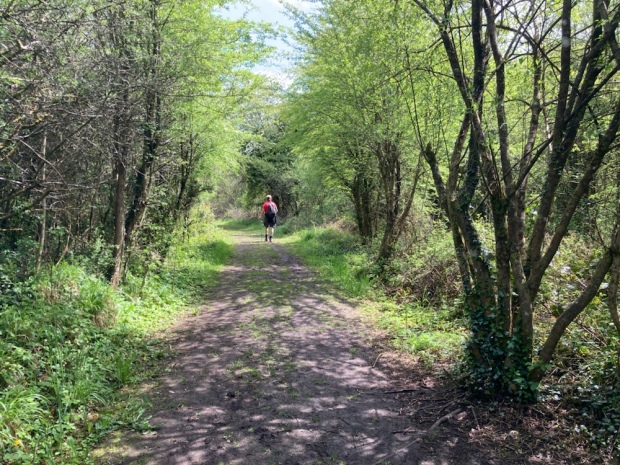 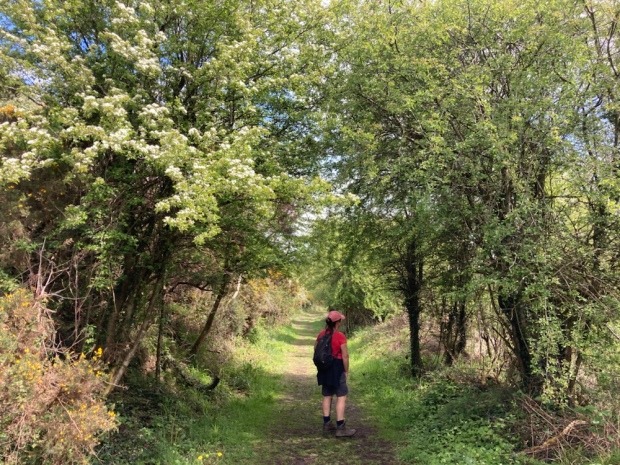 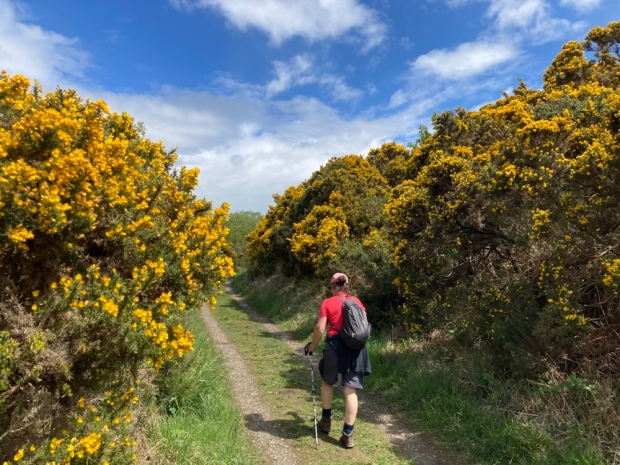 The turf extraction industries of the past had left less than 50% of the original bog surface remaining and maps of the changes over 200 years show the increases in tracks and drains. 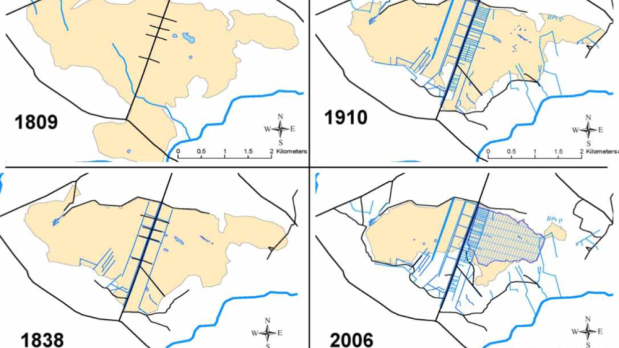 A short side track took us up to a picnic table and benches atop Rabbit Hill where we lunched overlooking the Bog of Allen and the distant Slieve Bloom mountains. 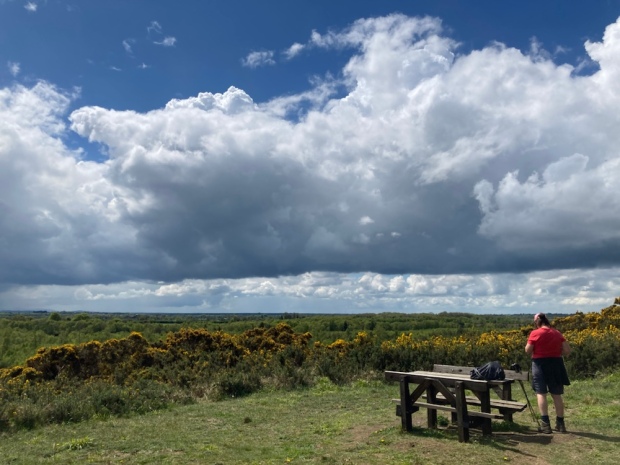 This trail had been developed recently, about 2018, by Offaly council in response to the Get Ireland Walking Stategy supported by Healthy Ireland and judging by the number of cars at the trailhead ,Mulligans car park , was popular. The map board there displayed a number of different options and info. 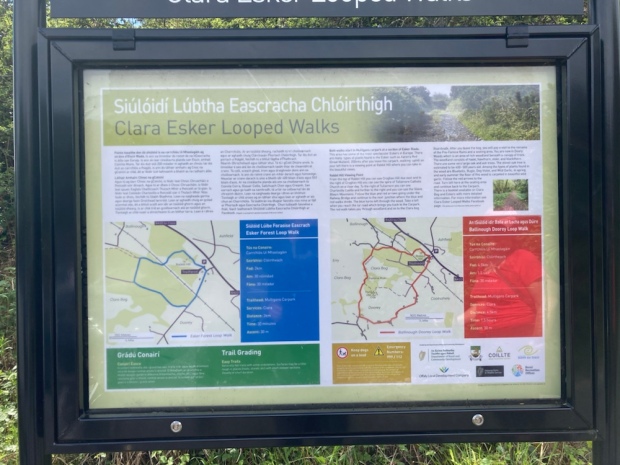 A stretch of tarmac road took us passed a railway cottage virtually on the line and on to a track of esker gravel that wove between dandelion laden fields and into Doorey Woods. 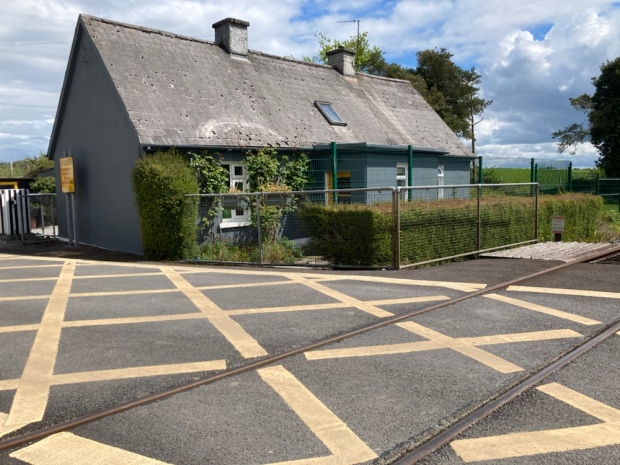 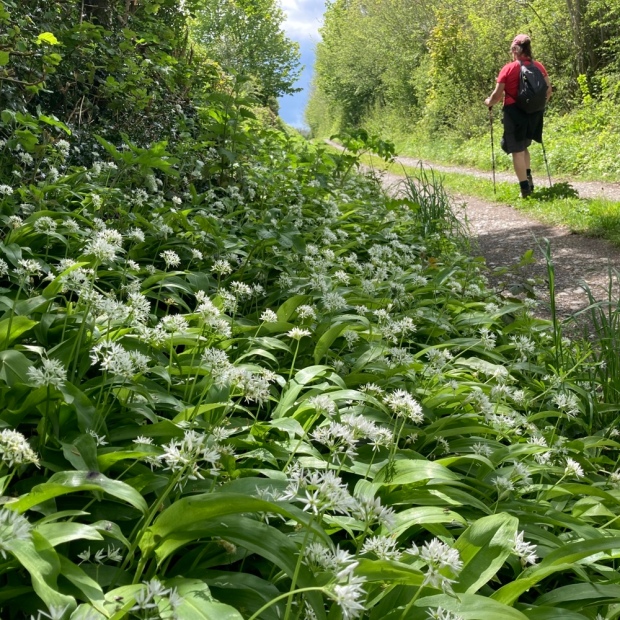 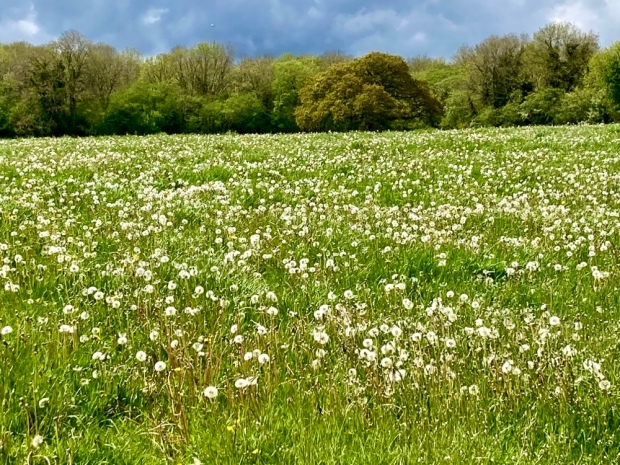 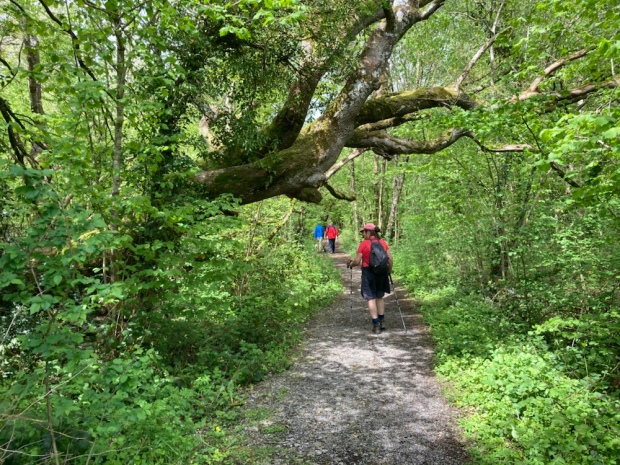 The ancient native woodlands here were species rich and made up for the sad sight of Ash suffering from dieback with carpets of ransoms and bluebells and sturdy oaks over 500 years old. 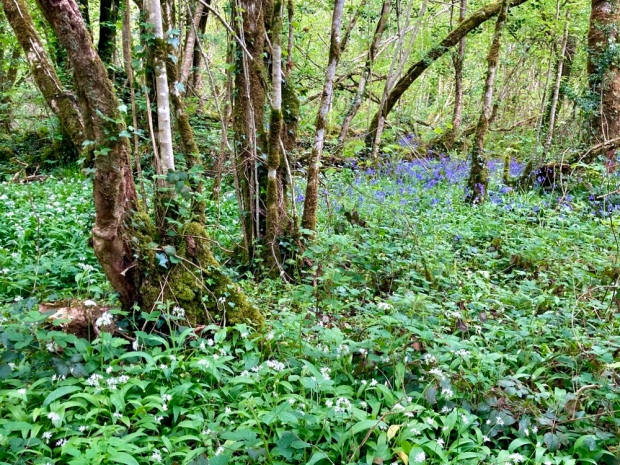 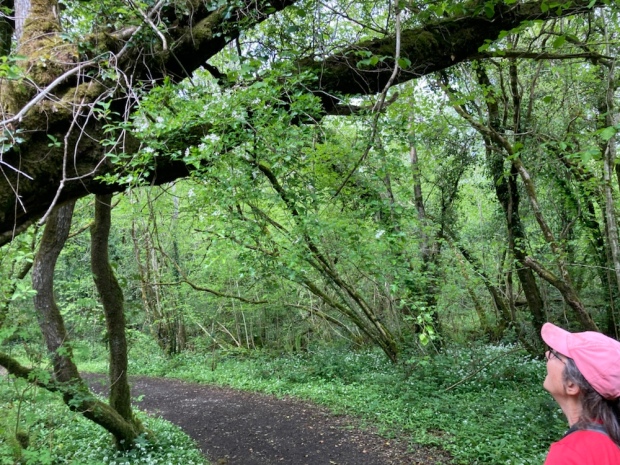 Another tiny side track led us to the moss covered stones and remnants of wall that are all that remains of a prefamine village now lost to the woods. 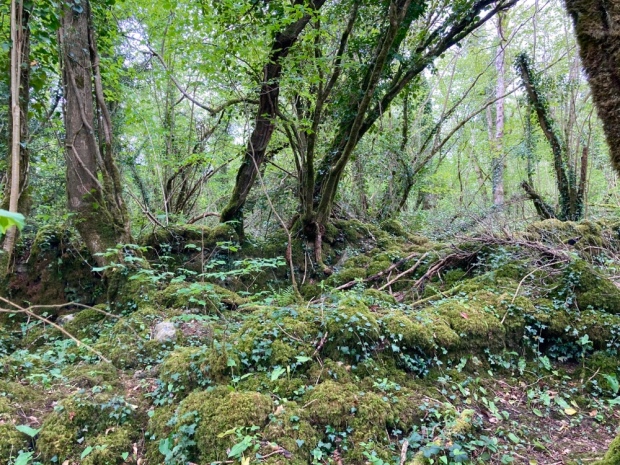 A boardwalk of old railway sleepers took us out across a section of the raised bog, part of a restoration project funded by an EU Life programme. 200km of deep drains have been blocked by 15,000 peat dams to raise water levels and effectively increase the area of active bog on 12 special conservation areas. 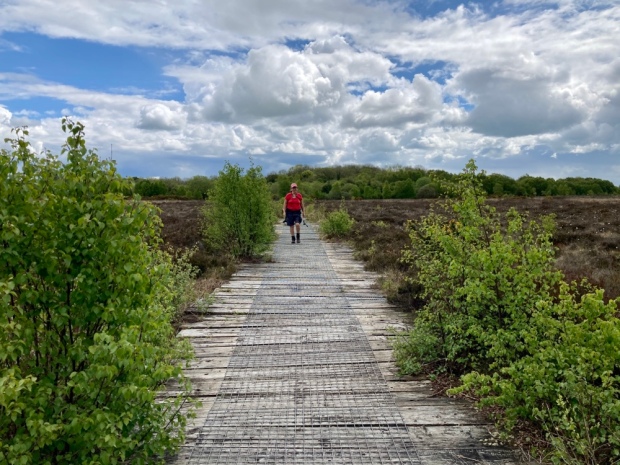 A special place of special species with 24 different sphagnum mosses. A rare moss thought to be extinct was found here in 2014 and there are also (unfortunately) 2 kinds of rare midges in the area. The bogs, known as Ireland’s rain forest, are recognised as greatly important for bio-diversity, flood control and as a carbon sink- storing twice as much carbon worldwide as forests. 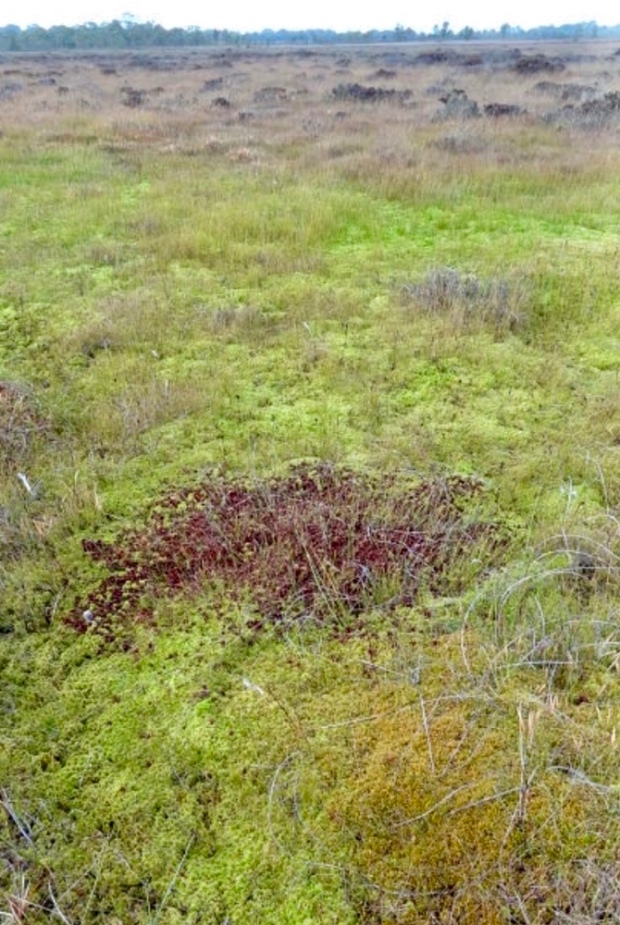 Leaving the boardwalk we cut through some trees to reach farmland and a old track that led us to the road that bisects the bog and a couple of km later were back at the station in Clara. 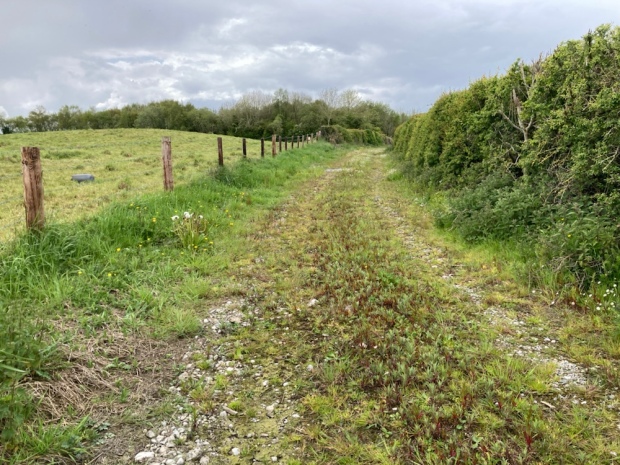 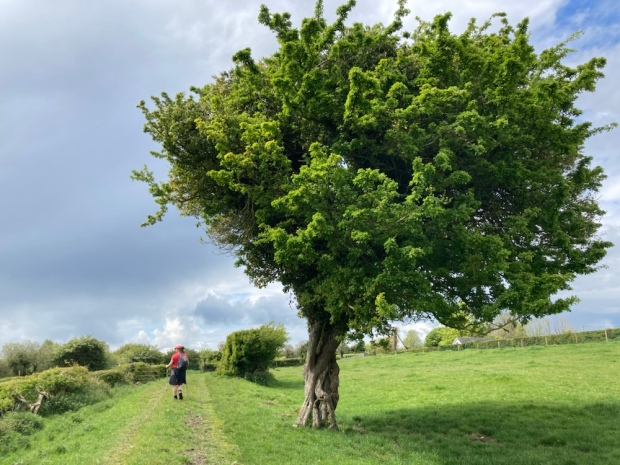 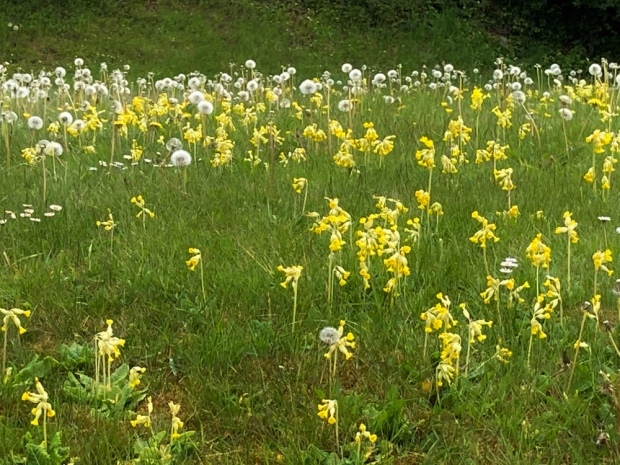 An easy leisurely walk of about 10 km made better by travelling by train. A good start to a recovery programme ( from a couple of stent implantations – the necessity of which explains the dizzy breathlessness on the Lycian Way) that hopefully will lead to the Portuguese Camino in September.