A couple of weeks after my last ramblings in the Nephin Wilderness Park we returned to Mayo, to explore the landscape to the north. We started by visiting Enniscoe House and its 3 km Woodland Loop. Actually we started in the Kaffa Coffee Cafe and museum in a converted outbuilding of the 18th century Georgian mansion before meandering around the walled ornamental and organic fruit and veg garden restored under the Great Gardens of Ireland Programme. It looked like Covid regulations or something had hit the upkeep of the gardens hard which was sad to see and we moved on to the woodland beyond the walls.

The gardens have been certified organic for over 25 years and other good things have been initiated here over decades. In 1993 10,000 sessile oaks, Ireland’s National Tree, were planted with help from the Tree Council ( and Mitsubishi) and the woods are part of a Neighbourwood Scheme to create local and community amenities for recreation in nature. They won the Forest Service Biodiversity award in 2013. It’s also an International Phenological Garden, one of 28 sites in Ireland that notes important dates in nature each year. Leafing, flowering, ripening and leaf fall etc- all important info- not least for the study of climate change.

We set off to follow the trail to Lough Conn and back around Fox Covert, Burnt Wood and other named avenues. 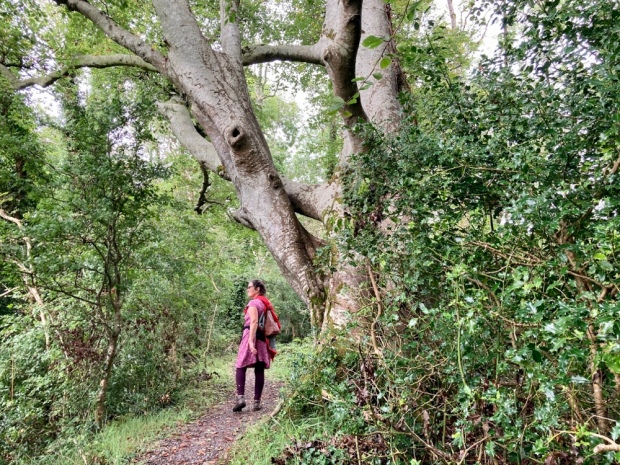 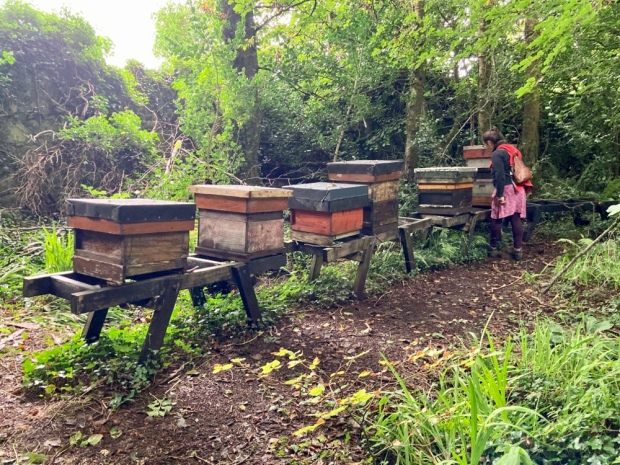 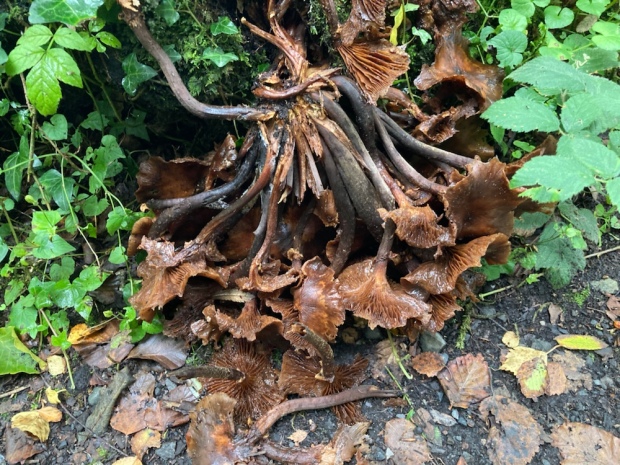 We parked up that night on the site of the old turf power station on Bellacorick bog, the flow country that stretches north from the Nephin mountains all the way to the coast.

In the morning we crossed a new bridge over the Oweninny and joined the 13km looped walk around the site. 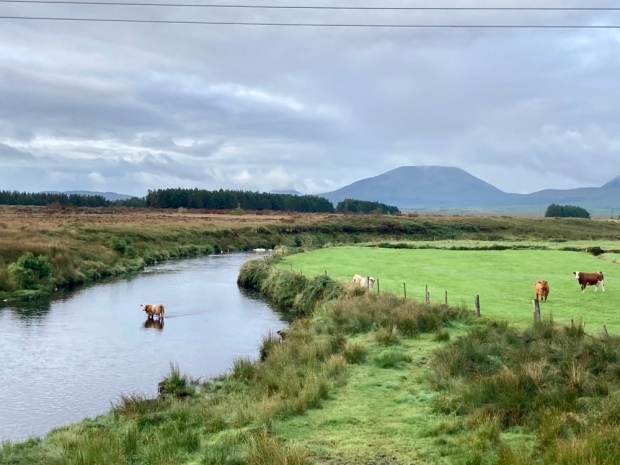 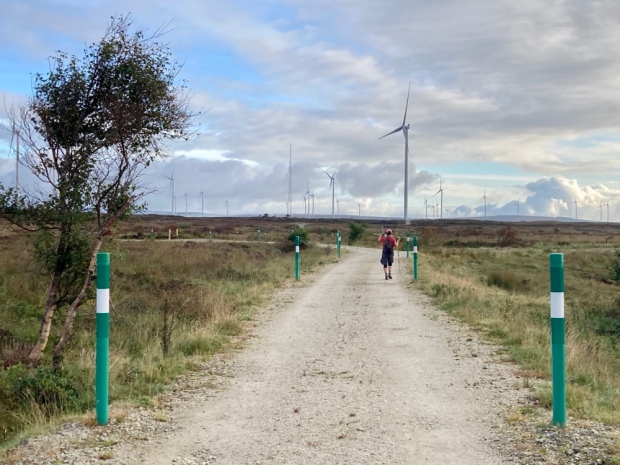 A joint venture between Bord na Mona and the ESB, the renewable energy plant is a major part of BnM’s “Brown to Green” rebranding. Although I think much of the cut away bog there is beyond restitution into a working carbon sink eco system, it is heartening to see its rapid transformation into a more ” natural” state. 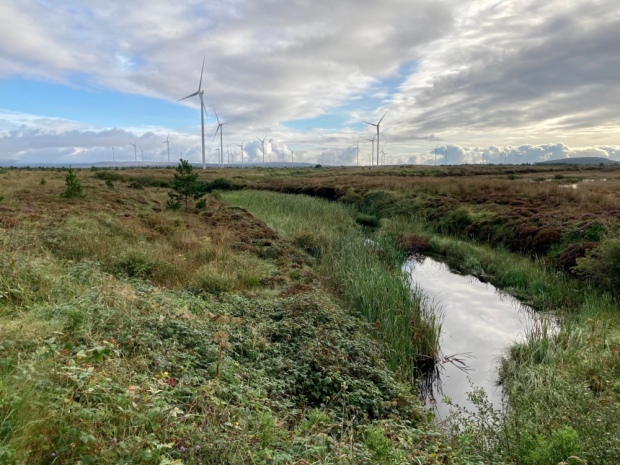 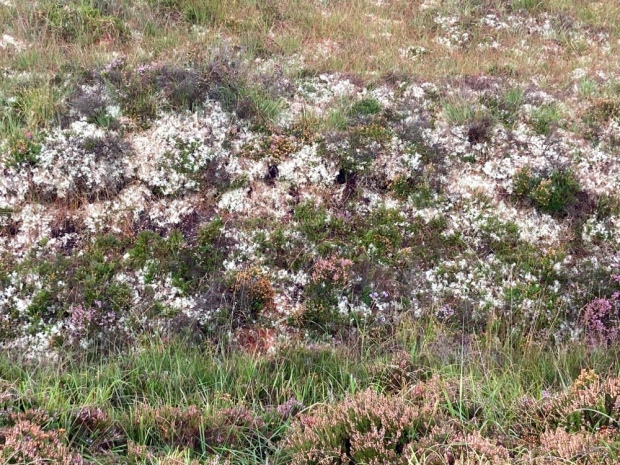 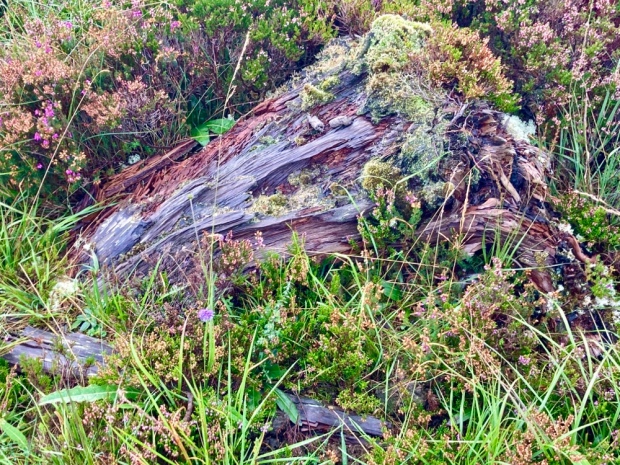 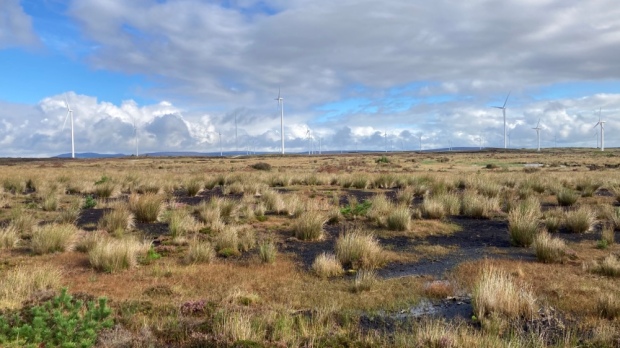 Cows and sheep grazing, insects and birds on the ponds and wild growth of heathers, grasses, lichens and mosses all testified to recovery. The paths followed the miles of old railway track, laid down to facilitate the removal of 1000 tonnes of ground a day. 10km of new roads have now been made for phase 2, complete next year and doubling the number of turbines and producing an additional 83MW of clean energy. 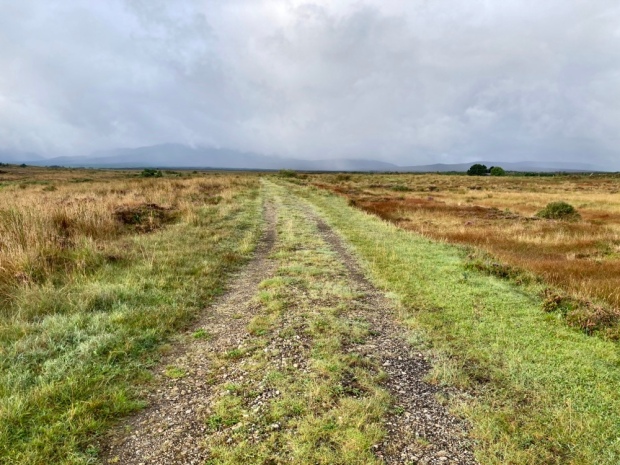 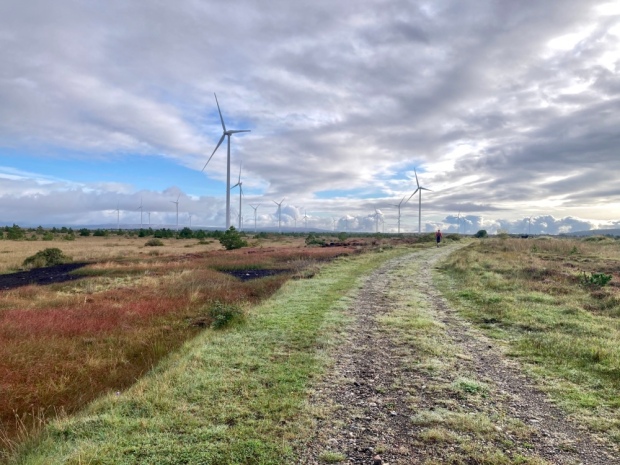 A nice flat easy hike across an amazing landscape under a very big sky. Unfortunately we discovered we shouldn’t have been on it at all when we tried to go to the visitor centre and discovered it closed due to construction of phase 2. A further, phase 3, is now in the planning stages- to bring another 50 MW on stream further to the east. 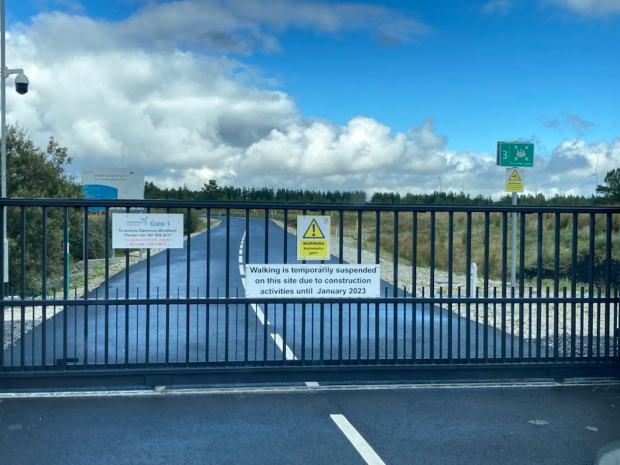 Across the bog a few km, near the proposed site of phase 3, is Blanemore Forest and its 4.7 km loop. A spruce, pine and larch plantation was thoughtlessly put down on top of a wealth of Neolithic and Bronze Age monuments.

Although surveyed in the early 1960’s, when the state forestry board first bought and planted the land, the pre-bog boundary walls, field systems, court- tombs, stone row and standing stone here were “lost” for decades before being brought to light in ‘ 93 by a couple of archaeology students. Since then the local community has done much to preserve and present these remnants of Ireland’s first farmers over 5000 years ago.

For 500 years from 3,800BC Neolithic farmers cleared forest and created fields for grazing cattle before a change to a wetter climate and the growth of bog coupled with soil erosion led to the disappearance of the settlement here. The nearby Ceide Fields complex spans 1000’s of acres and is the largest Neolithic site in the world.

The trail led us on forest track and rubber mat boardwalks past information boards at each of the sites. Unfortunately much has been swallowed by the bog and forest and the repeated planting and harvesting operations have caused a lot of damage. In fact the capstone of the largest court tomb was deliberately knocked off by digger in the 60’s to see what lay under “the large flag” of the ” giants grave”. Thankfully all archaeology within state forests is now protected. 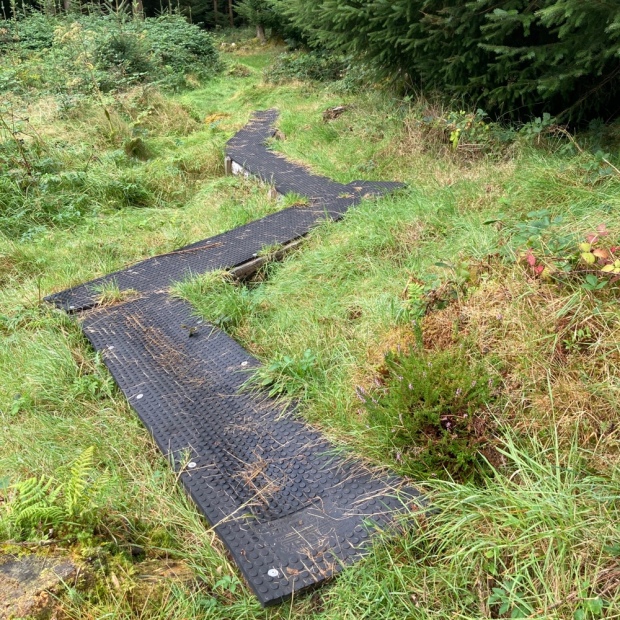 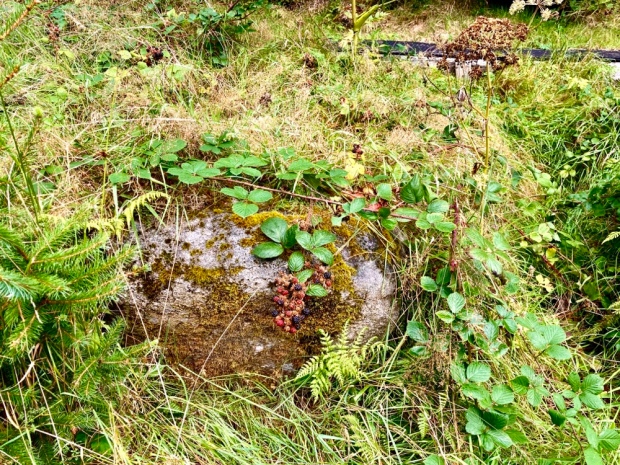 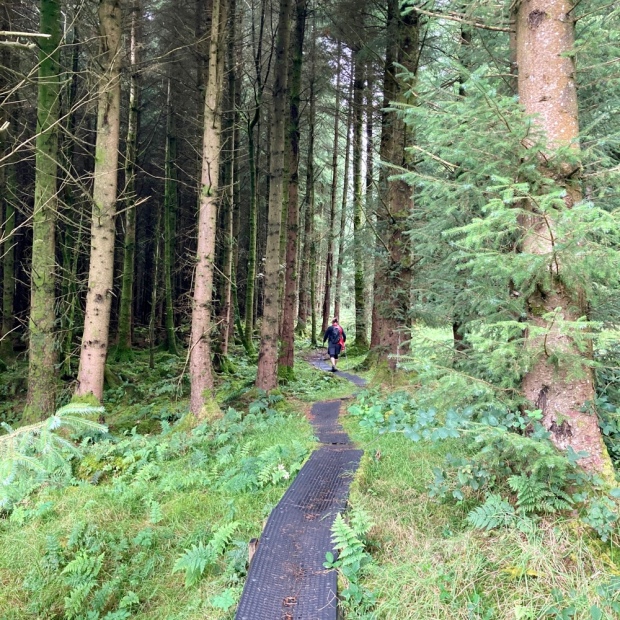 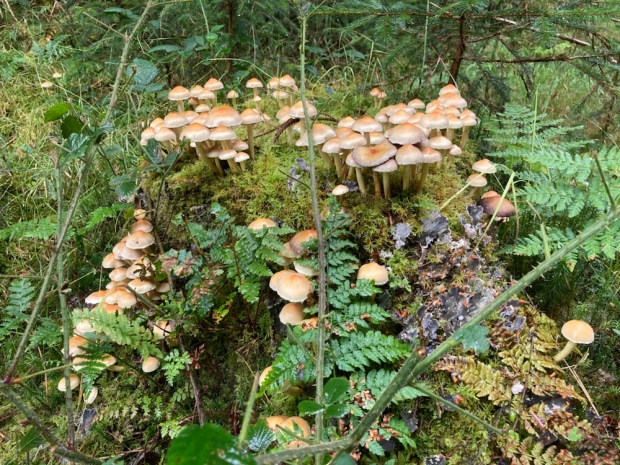 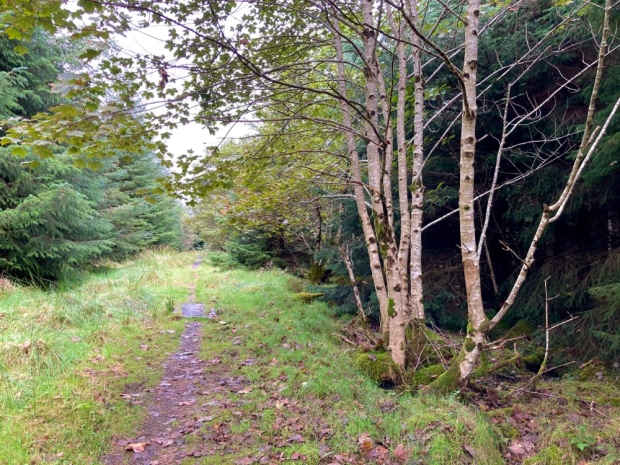 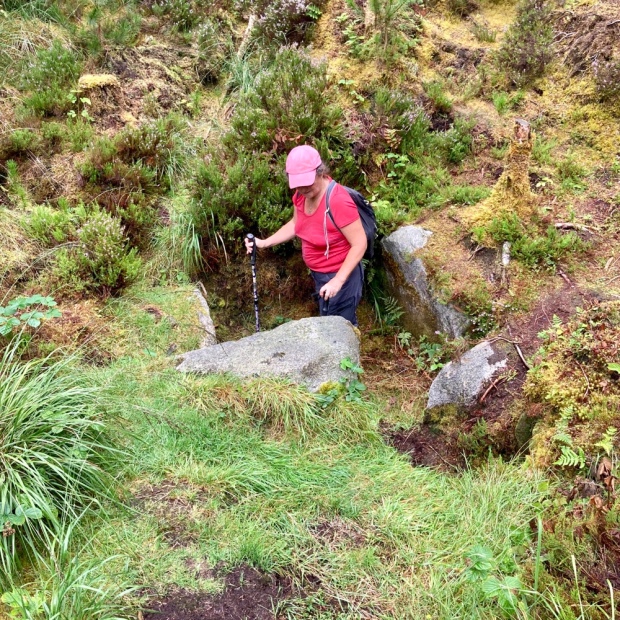 The site also contains a couple of impressive Bronze Age monuments from when farming returned about 600 years later as things warmed up again temporarily.

A large standing stone and a stone alignment atop a gravel ridge had a very different prospect before the trees surrounded them. It is conjectured that the stone row is in alignment with Nephin on the winter Soltice when the sun would appear to “roll” down its shoulder, similar to an event we have witnessed on Croagh Patrick. 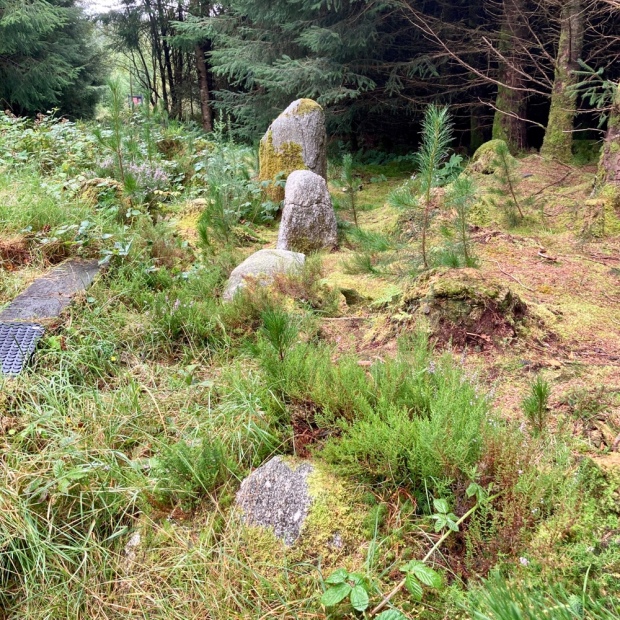 After a few hundred years the wet returned, the farmers retreated east to the limestone, and the bog reclaimed the area again. Who knows what might be revealed later in this climate change?

It was a big weekend in Mayo and particularly in our next destination, Ballycastle. Not only was the Sam Maguire cup within reach again in Mayo’s 10th Gaelic football final since their last win after a 70 year wait but the Red Bull cliff diving championship was also happening from the dramatic coast there, creating a lot of razzmatazz.

We watched the game in a fairly raucous pub with the excitement growing for hours before the throw in. Sad to say it didn’t go well and we slid away to the camper after the final whistle unable to share the agony of the true Mayo people.

Sunday morning we walked down through town to the trail head of the Sralagagh 9.5km Loop and headed off a small road that became a boreen that became a track. Abandoned gravel pits, rough overgrown fields, some mattress dumping and views of farms smothered by forestry monoculture doesn’t sound great but our surroundings had a melancholy charm enhanced by the frequent gurgling of multiple watercourses. 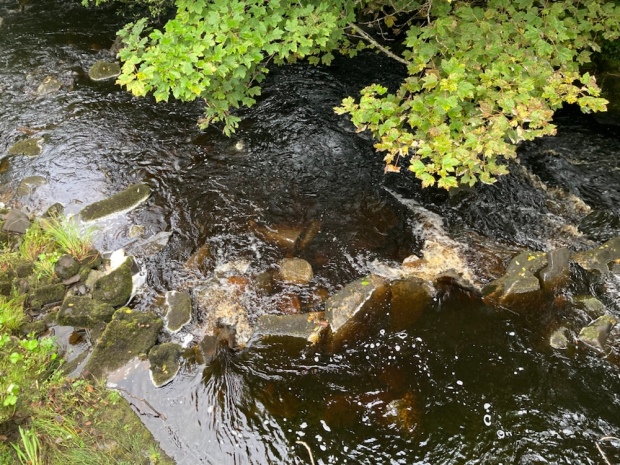 We reached old turf banks and at the highest point we turned down a bog track that stretched far into the distance. This deserted place must have been a busy hive of industry for generations of families producing fuel. From here we could look back to a sunlit Ballycastle and, further down the fuchsia track, the towering sea stack off Downpatrick Head where the diving was taking place. 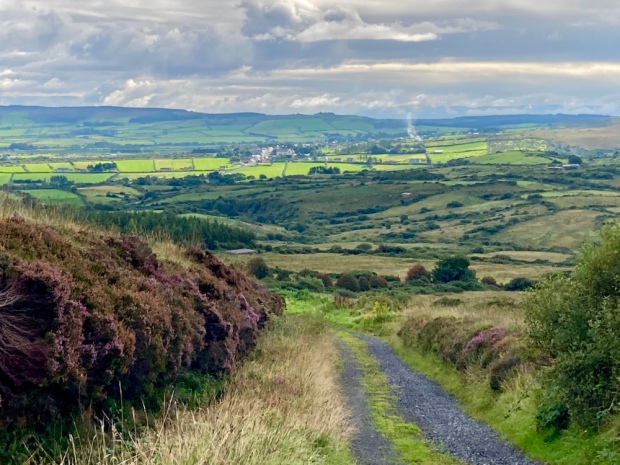 A coffee at the beach watching kayakers setting off for a fisheye view of the cliff divers, and we drove east over the headland for our last walking environment- the shore. The tide was out on Lacken Bay exposing miles of golden sands. There is a centuries old tradition of horse racing on the strand and every May thoroughbreds from around the country compete over a 5 furlong looped track surrounded by spectators who also engage in a variety of family fun sporting activities. Rather than sleek steeds racing around the sand we had to endure a boy racer doing doughnuts.

This is the scene of the French landing in 1798, the last act in that ill fated rebellion, and the troops marched across these sands to Killala and eventual defeat at Ballinamuck when the French were allowed to surrender whilst the Irish were massacred. We walked out into wide airy space experiencing a similar openness to the flat bog land horizons, tip toeing over the rivulets of retreating waters and admiring the big skies and small sandy details. 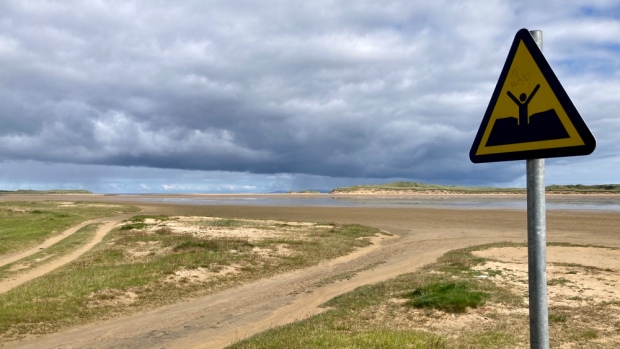 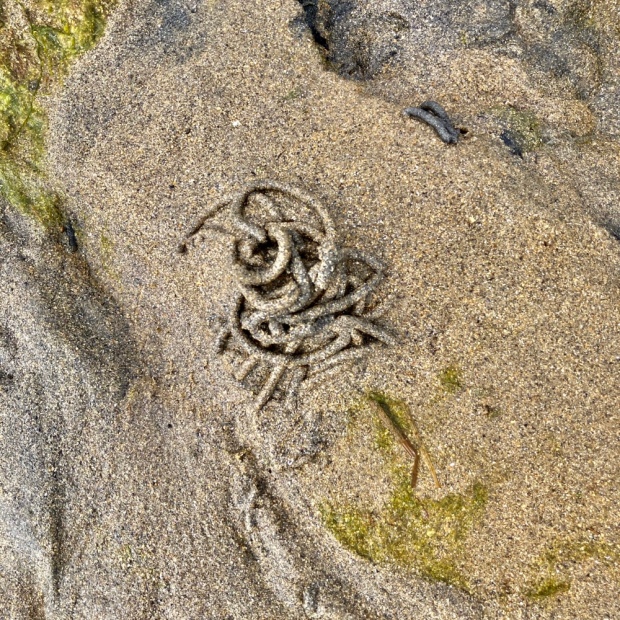 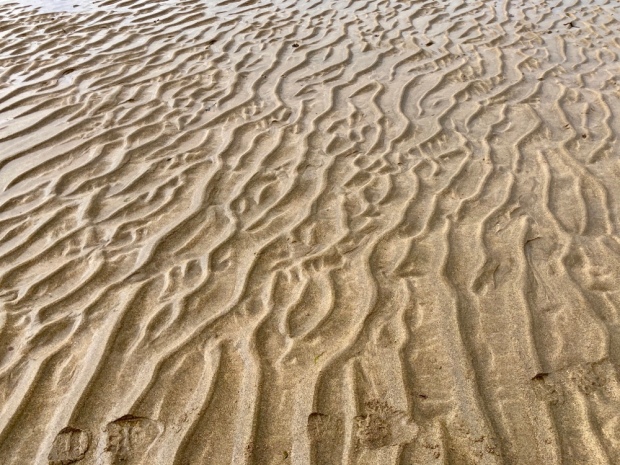 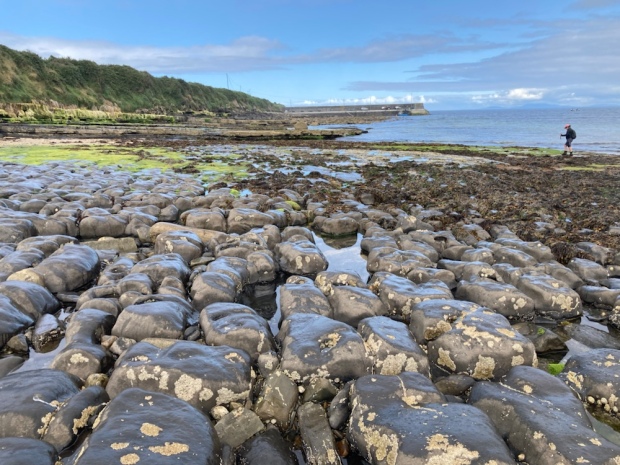 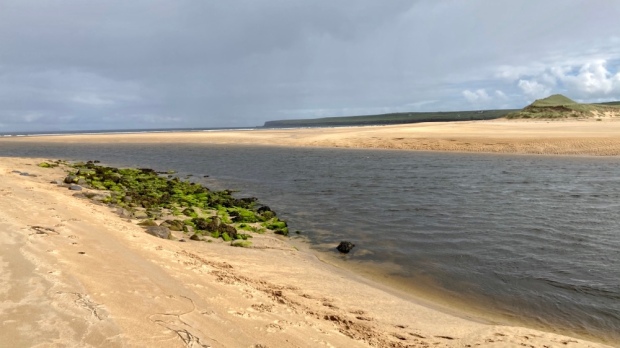 A lovely series of walks, but a slight sense of sadness crept in when contemplating the loss of life in the bloody rebellion and the memorial to fishing disaster, the migratory birds lining up to leave, signifying the end of summer and ,of course, the sad defeat of the Mayo hurlers. 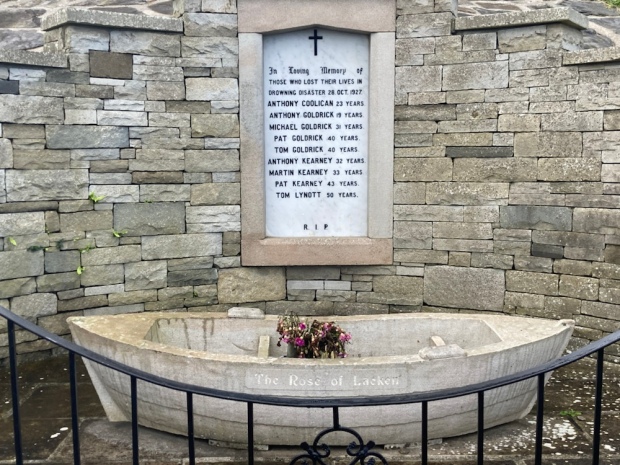