A gloriously dry and sunny St Patricks Day holiday weekend gave us the opportunity for our first long walks since being back in Ireland. We decided to keep it local(ish) and headed back to an area we know and love, starting our micro adventure by the motor cruisers in Portumna harbour and starting off on the Hymany Way.

The first 17km are atop the embankment that run along the western side of the Shannon, built by the ESB as part of their 1920’s Ardnacrusha hydro power station mega project.

” One of the finest pieces of working industrial archaeology in the country” the raised earthen bank protected the low lying land from flooding and water levels in the river were controlled by a series of 3 pumping stations taking water from the inner man made water course when needed. It makes for fine walking with views of the river and callows on one side and deeply rural farmland on the other. With no roads nearby the peace and quiet is tangible with only the occasional cruiser interrupting the birdsong and wind rustled reeds. 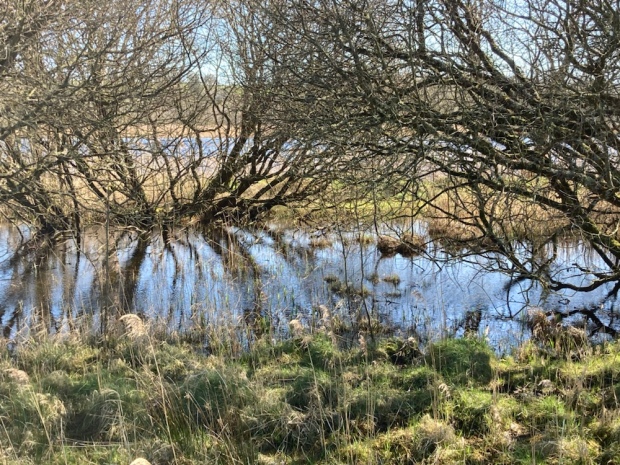 We stopped for lunch at a small copse of giant ash trees that were home to a large badger colony, some of whose tunnels disappeared into the bowels of the tree trunks. 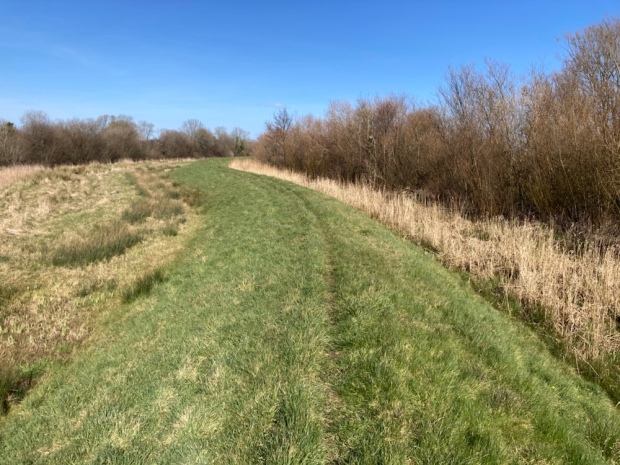 The 90km Hymany Way from Portumna to Ballygar in East Galway is one of the 11 sections of the Beara- Breifne Way that runs 500km from West Cork to Leitrim roughly following the line of Donal Cam O’Sullivan Beare’s March in 1602. The two week retreat from hostile Anglo forces saw his party of 1000 soldier’s and camp followers reduced to just 35 by the time he got to his ally O’Rourkes castle in Leitrim. 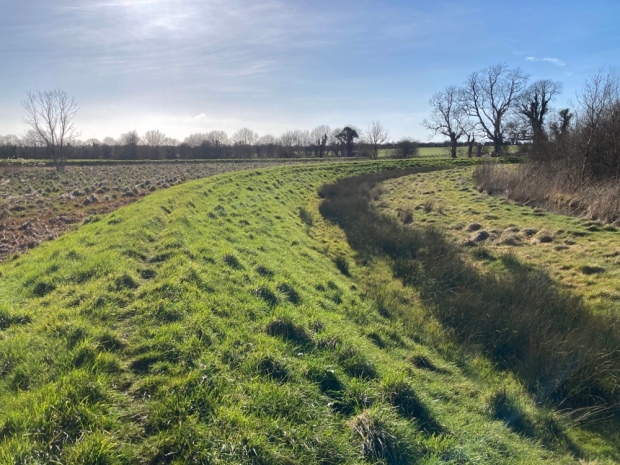 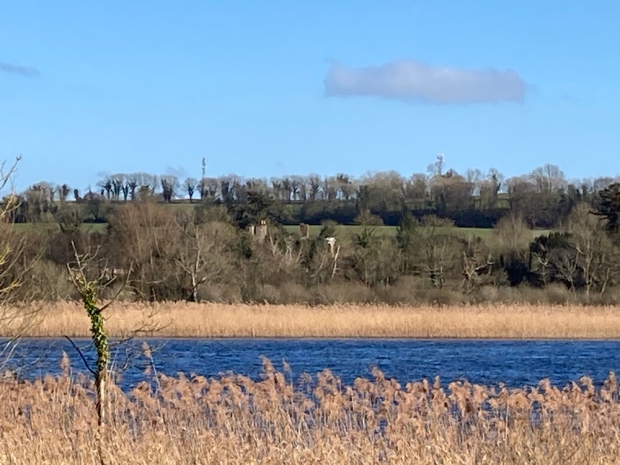 When we got halfway to Meelick we stopped again, opposite Ballymacegan island where an old pier and abandoned riverside restaurant project at Esker Riada reminded us of camping here 25 years ago on a boating holiday. From here we returned to the camper, drove to Meelick and explored the newly restored Weir walkway. 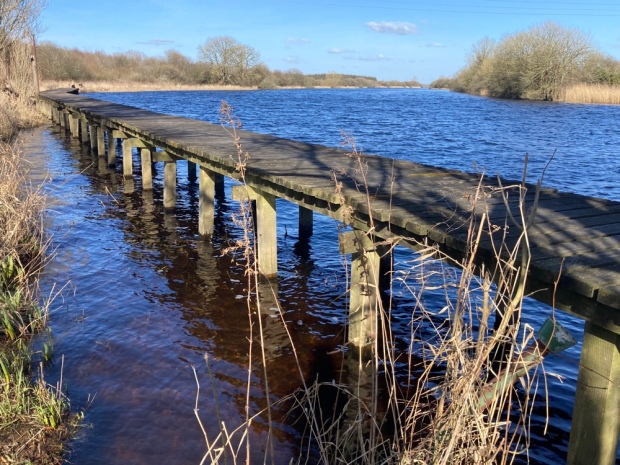 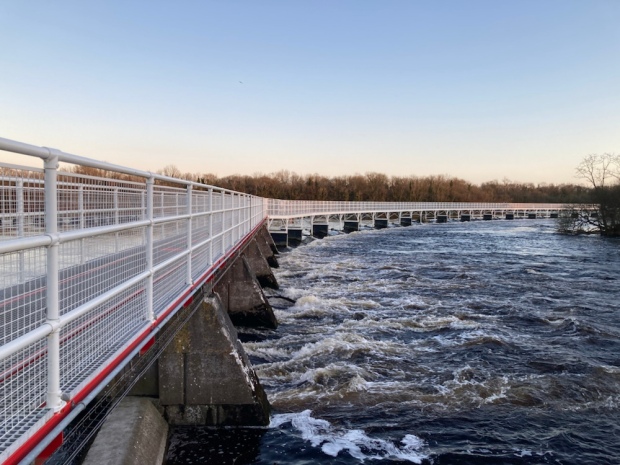 Built to control water levels in 1840 the 300 m weir walkway had been closed in 2016 after bad storm damage and restored over 3 years and €3 million. Crossing from West Bank to East you arrive on Incherky Island where the gravel walkway continues to Victoria lock where from the new oak lock gates on the western end you can look out at the point where the 3 counties of Galway, Offaly and Tipperary and the three provinces of Connaught, Leinster and Munster all meet. 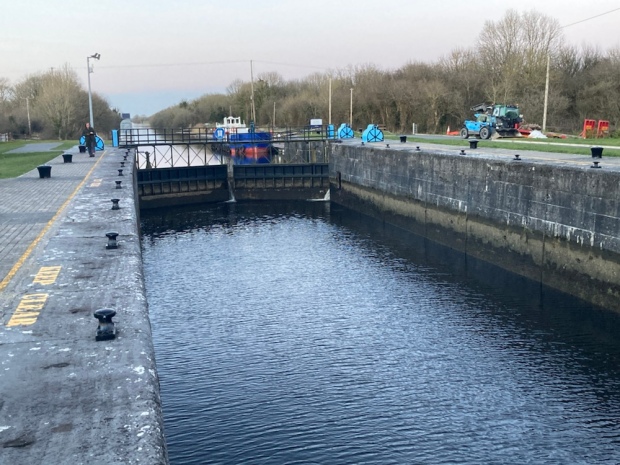 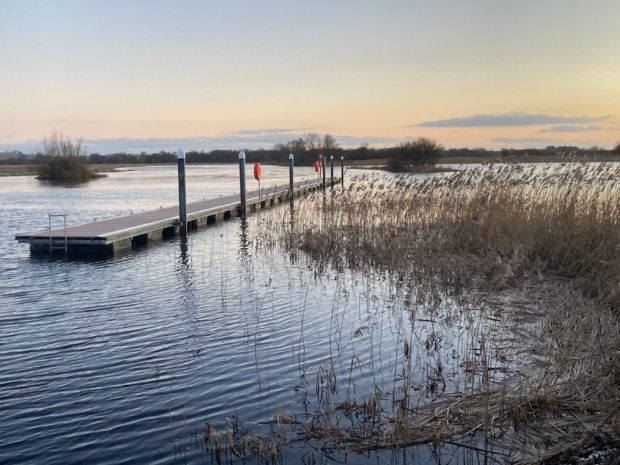 Next morning we set off south down the embankment again on to the halfway turn back point. The wild and watery Shannonside was in contrast to the oldest church in continuous use, Meelick Abbey which appeared on our right. Founded for the Franciscan order in 1414 it was preparing for the Saturday evening mass when we went to explore the church and cloister. 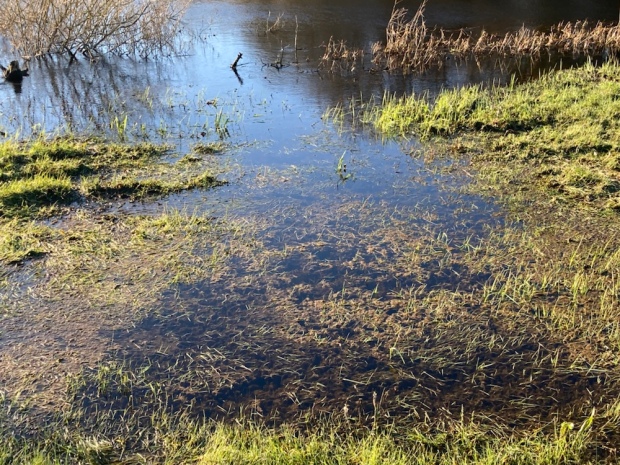 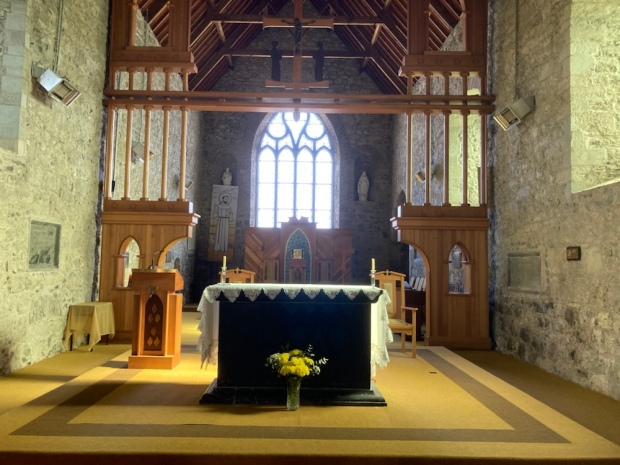 The Shannon Callows Special Protection Area stretches for approx 50 km from Athlone to Portumna and we were walking the finest of it. This vast area of seasonal flooding means unplowed or reseeded, enriched fields of mixed species of wildflowers and grasses, scrubby woodland of willow and alder which offer a wonderful habitat for insects, birds ( 66 calling birds identified) and wintering waterfowl along with mammals like otters and hares. Sheep graze the embankment keeping the grass nice and short for walking ( in places without grazing the Way can become almost unwalkable in summer).

We passed the area thought to be where O’Sullivan and his followers,( already depleted by a third), hoped to escape the hostility of the Munster chiefs by crossing the Shannon into Connaught. Losing 10 men in their first attempt in a small craft the desperate folk slaughtered and skinned 12 horses to cover an 8m boat and ferried across 30 at a time. Unfortunately for them the welcome was no better in the west as they struggled on northwards. Weary ourselves, we were able to relax in the sun.

Having walked back to the camper at Meelick again we missed out a few km of toad walking and drove instead to Clonfert for our raised bog hike in the morning. Before finding our parkup for the night we explored St Brendans Cathedral- founded in 560AD by the man whose own home made animal skinned vessel had got him all the way from Kerry to what became known as America. He is buried in the ancient graveyard near the magnificent 12th c Romanesque doorway with its superb carved sandstone details. 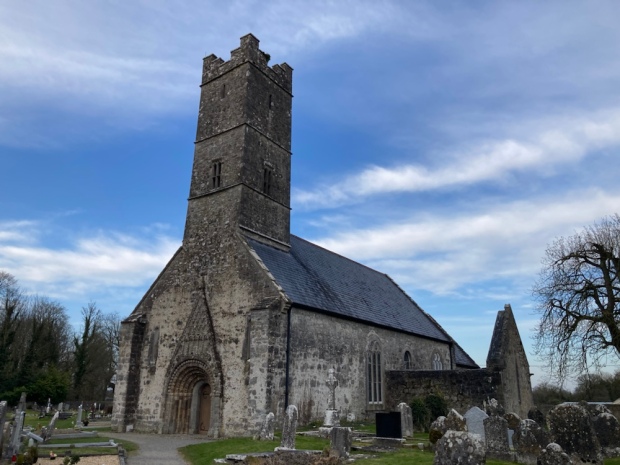 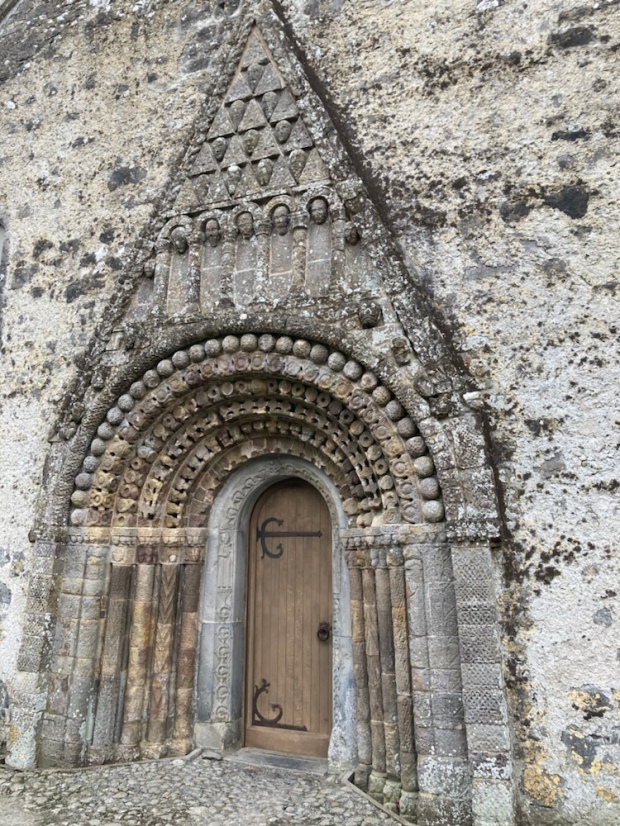 We went to reacquaint ourselves with the votive tree and the 400 yr old yew walk to the ruin of the Bishops Palace. Supposedly an overgrown hedge it was originally part of an extensive pleasure garden now long rewilded. 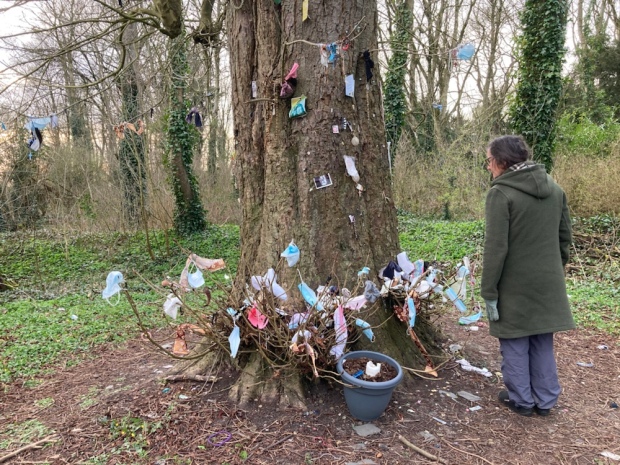 The Palace, occupied since the 16th c , had fallen into disrepair by 1951 when it was bought by the infamous British Fascist Sir Oswald Mosley. As someone who had spoken out against the use of the Black and Tans in Ireland he was kinda welcome here and the money and time he and his wife put into the restoration and the employment of gardener, housekeeper, cook and chauffeur were also welcome. All the work putting in heating, lighting and water was for nothing however as the house burnt down 3 years later.

Just down the road is the Clonfert and Garryduff bog, for decades exploited for the fuel to run the Shannonbridge power station across the river, now still and silent as Bord na Mona cease all peat harvesting and the power station sits idle. We found a peaceful parkup and walked the old rail track for a look. 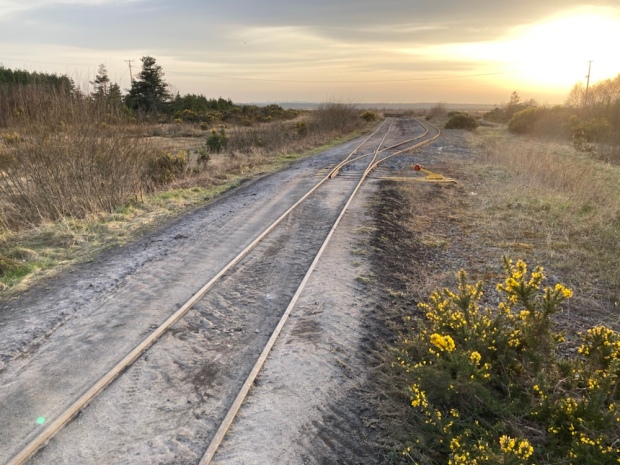 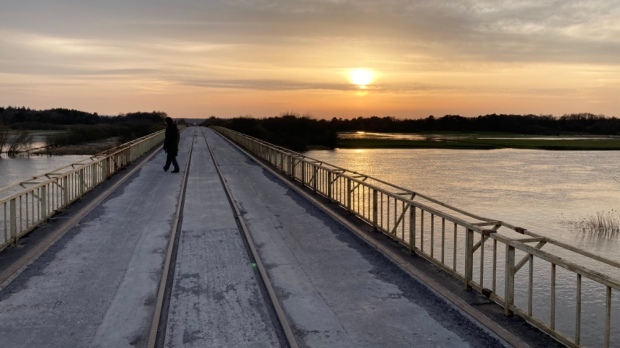 The final leg of our journey in the morning took us along a tiny back road by the callows past abandoned homesteads to the Grand Canal extension across the bog to Ballinasloe, filled in by Bord na Mona who lay a train track on top to funnel wagon loads of turf towards the hungry furnace of the power station. 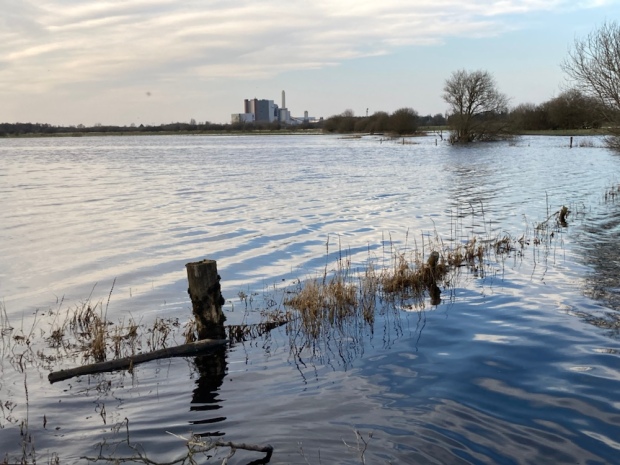 The Hymany Way took us off the track and up onto a gorse tunnel track on the bog edge and then into woodland where the waymarkers were being englobed by the swelling trunks.

We were near to Decoy Woods were wildfowl were trapped for the Bishops table. Without the drainage pumping new ponds and lakes of swans and water birds were appearing and birch woodlands were springing up. The Transition from Brown to Green as Bord na Mona has branded its new Eco credentials has started and none to soon. It was shocking and startling to see the vast amounts of plastic used to cover the milled peat had been left in the environment. 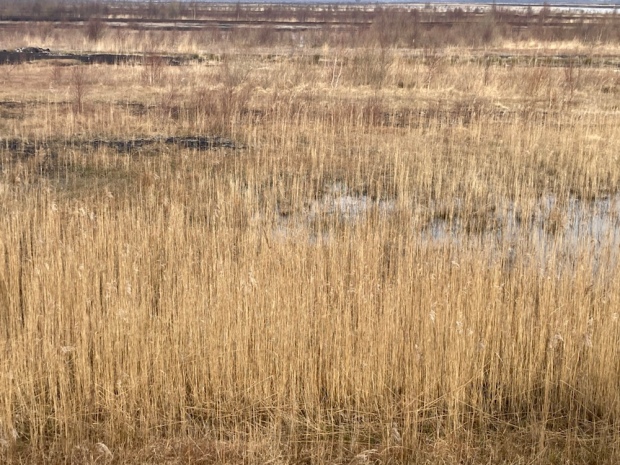 An old bog track ( with more saddening sites of dumped rubbish) took us to a stretch of tarmac road. A quiet backwater, already semi deserted with empty houses, I wondered how the unemployment created by the closure of the bogs would affect the dwindling community. The road led us back to the vast expanse of worked bog at Kylemore lock on the Grand Canal extension. 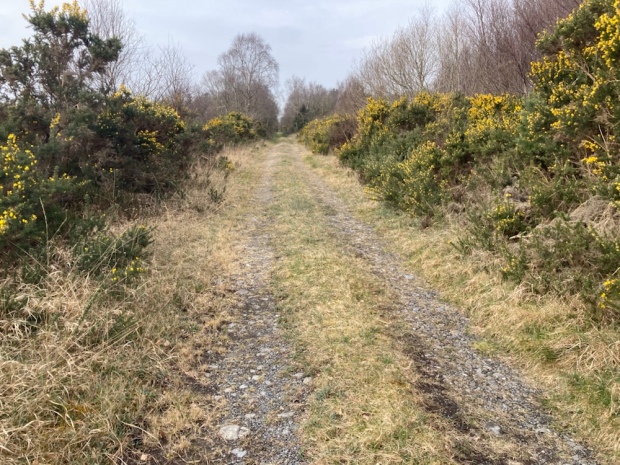 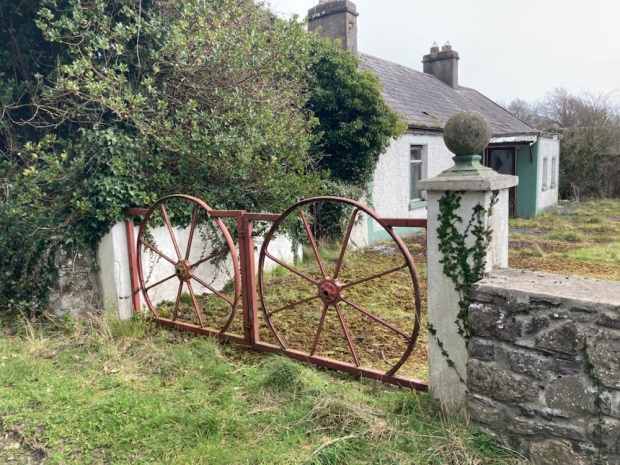 The last picture is of the old lock keepers house and barracks. The boggy nature of the canal banks made for easy sabotage and 3 police barracks were built along the route to deter scheming locals hoping for some repair work. Bizarre to see an old turf locomotive on the track through the lock gates where once a 20 hr daily service ran from Ballinasloe to Dublin with first and second class passengers in seated cabins and restaurant cars with fine wines and spirits ( first class only!). 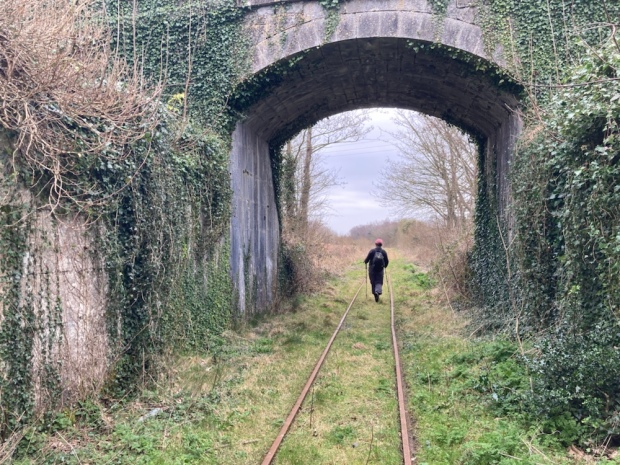 After lunch around the abandoned Bord na Mona stores and workshops we set off down the track for a long haul back to the camper on the filled in canal. It seemed almost criminal that an amazing engineering feat, employing over 1000 men in its 14 mile of construction in 1824, should have been so robbed of function. 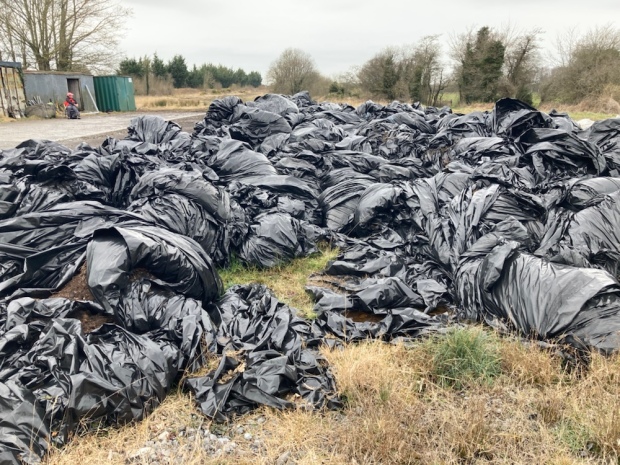 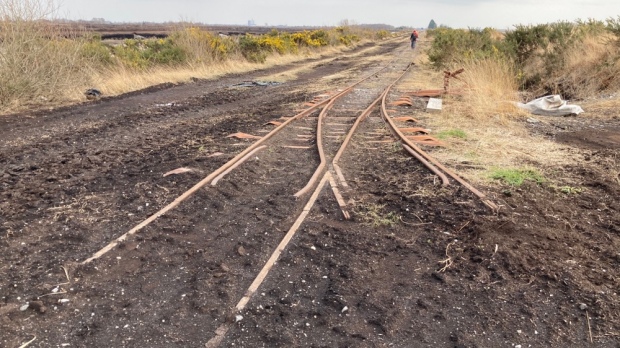 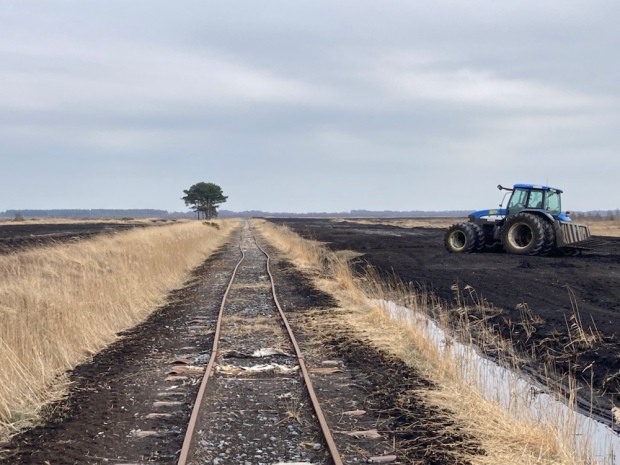 Massive change has come again to the midlands boglands. The rehabilitation of the Brown to Green scheme is underway. The Just Transition fund is channeling millions of euro into projects for walking and cycling routes, climate action training, digital hubs, transport links, bio energy, wind and solar farms, medicinal herbs inc cannabis, and the restoration of bog to a living working carbon sink. The Bord na Mona plan for Garryduff is ” setting the site on a trajectory towards establishment of a mosaic of comparable habitats including wetlands, fen, Reed swamp, wet woodland, heath, scrub and birch wood.”

At a crossroads between turf and renewables, between Brown and Green, I’m glad the transition was started before the current war related fuel crises made cautious minds falter.