A long awaited return to the Republic’s most northerly county luckily coincided with days of late summer sunshine- perfect for strolling the manicured lawns and walled gardens of some of Donegals fine collection of surviving Big Houses.

We started by exploring Oakfield Demesne, originally built in 1739 for the Dene of nearby Raphoe the house was extensively renovated and restored by Sir Gerry and Lady Robinson when they acquired it in 1996 and set about creating a glorious park and gardens over the 100 acre estate.

Sir Gerry who died last year put life and soul into creating a varied parkland in the lower half of the land, digging a 40ft deep lake, planting 40,000 native trees, building follies and a maze and laying 4.5 km of miniature railway track with trains and wagons – all from marshy farmland. 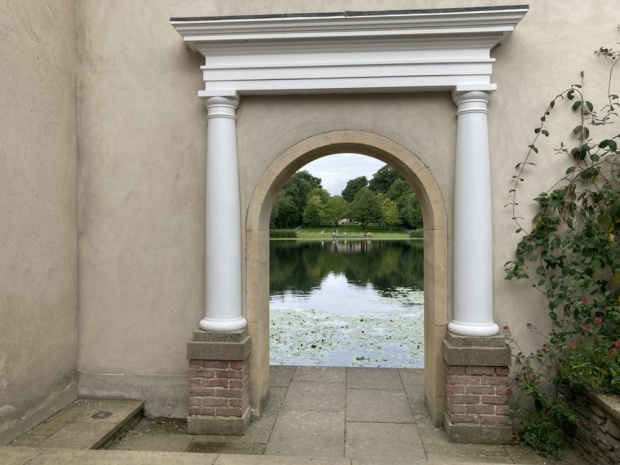 The Robinsons commissioned a lot of monumental sculpture which is placed around the kms of garden trails. 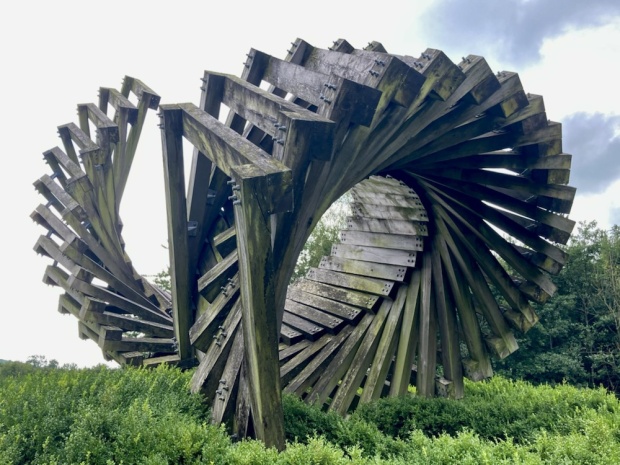 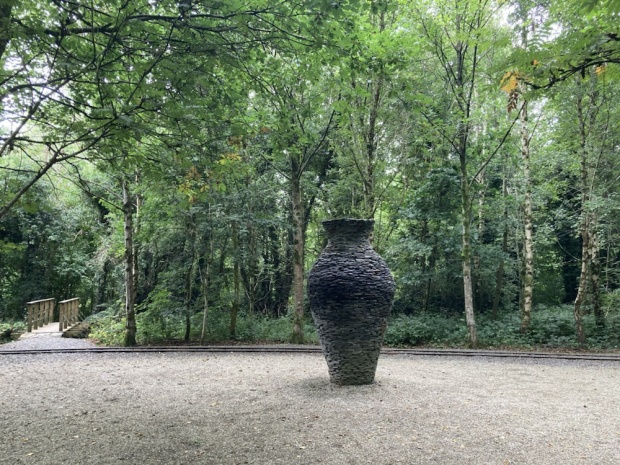 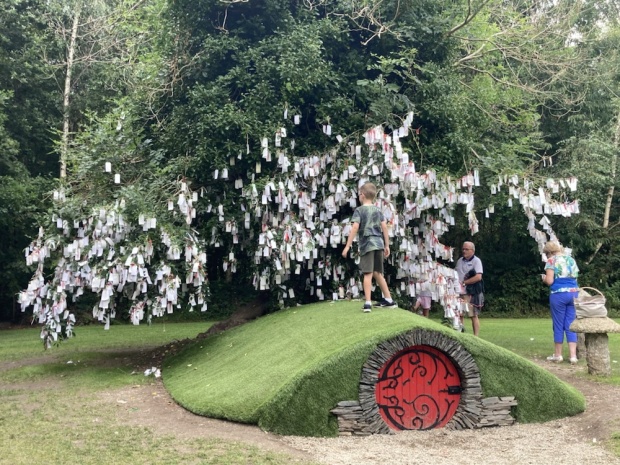 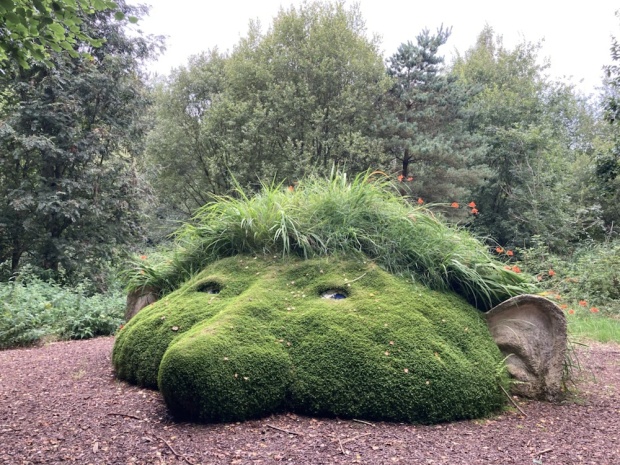 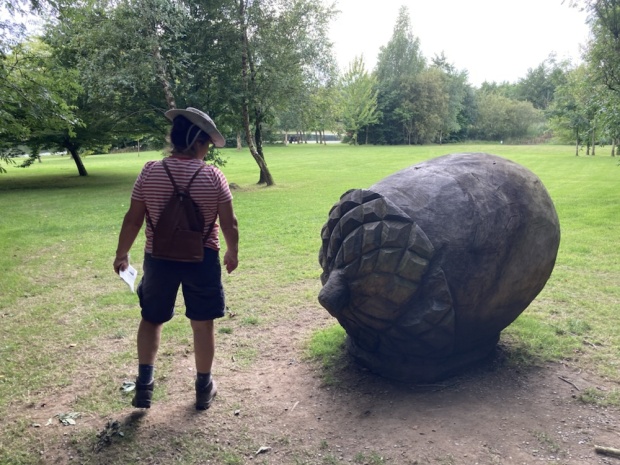 We took an informative tour of the normally private upper gardens- 50 acres of mature trees set in chequerboard lawns, sweeping wildflower meadows, another man made lake with accompanying Nymphaeum fed by the original Victorian ram pump, ancient woodland and award winning restored walled gardens with topiary and paved formality as well as wild and exuberant planting of exotic flowers and scrubs. I was too immersed in the plant spotting to take pictures. 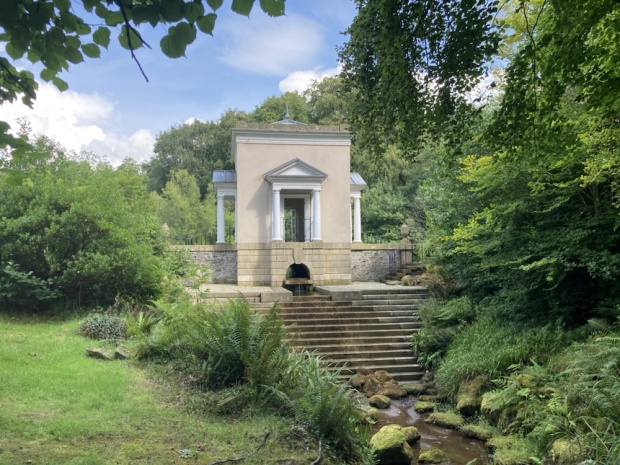 After the cosseting of the comfort of controlled nature we sort out the wild and untamed and headed for the towering sea cliffs of Horn Head on the north coast.

The 360 degree views from what the famous naturalist Robert Praeger called the “finest headland on the Irish coast” were spectacular and covered Inishowen and Malin Head to the East and Tory Island and iconic Errigal and Muckish mountains. Even here all was calm, the normally crashing waves gently resting at the base of the 200m cliffs, the flat waters making an easy job for the boats hauling lobster pots in the morning when we set off from the camper on a 12km hike around the coast. 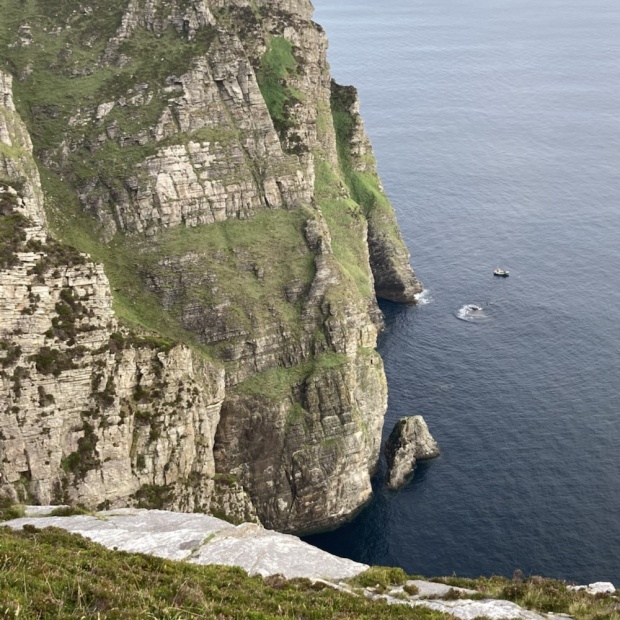 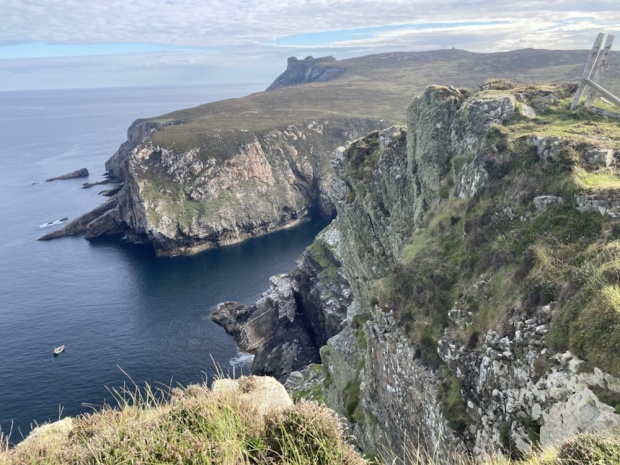 From the WW2 look out post we headed towards the Napoleonic signal tower never used to warn of a French invasion, and followed the dramatic geology westwards across the heather. The ending of headage payments on sheep and the resulting overstocking and overgrazing had enabled the once sheepwrecked and eroded landscaped to recover into a thick and healthy sward. 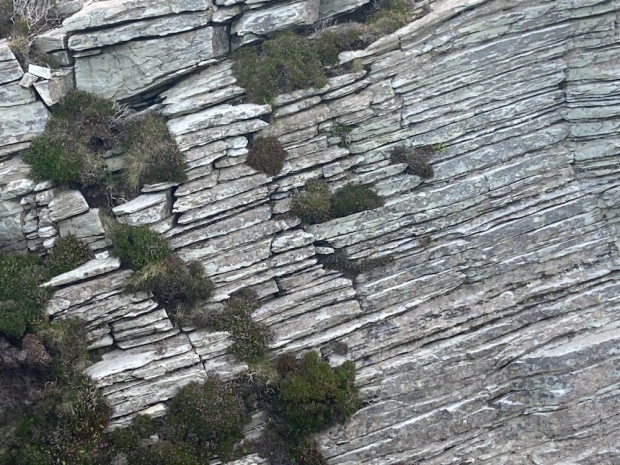 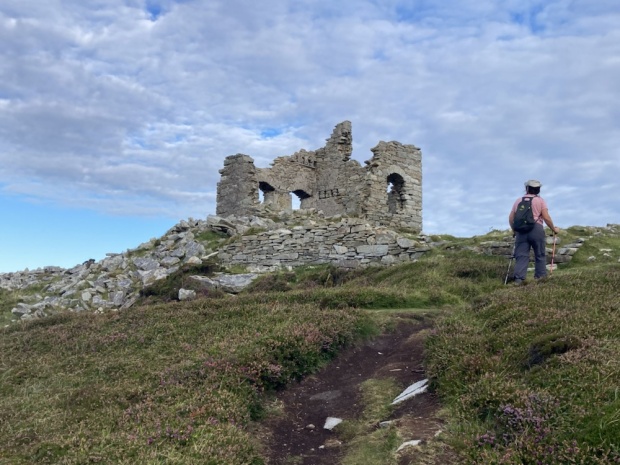 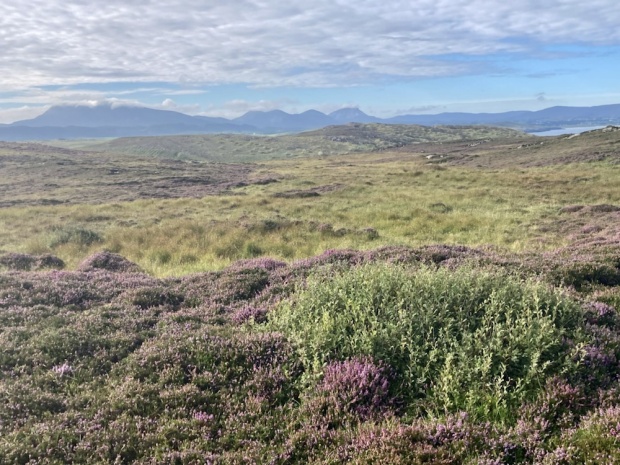 The head is rich in natural and man made features- Neolithic tombs and stone circles as well as phenomena like McSwines Gun, a blow hole that used to send a geyser 100 m up into the air with a retort head up to 10 miles away, and the sea carved Marble Arch. From there we watched some of the internationally renown colony of sea birds wheeling in the void. Shags, puffins, razorbills, gannets and many others call this place home returning to nest year after year.

We turned our back to the sea at an impressive stone wall and struck out into the interior on a direct line towards a very distant camper passing a remote farmstead whose horse and donkey were surprised by the unusual visitation. It must be a tough spot to try and wrest a living and we passed a scattering of sad and ruined cottages as we struggled through the heather to the comfort of a tarmac car park. 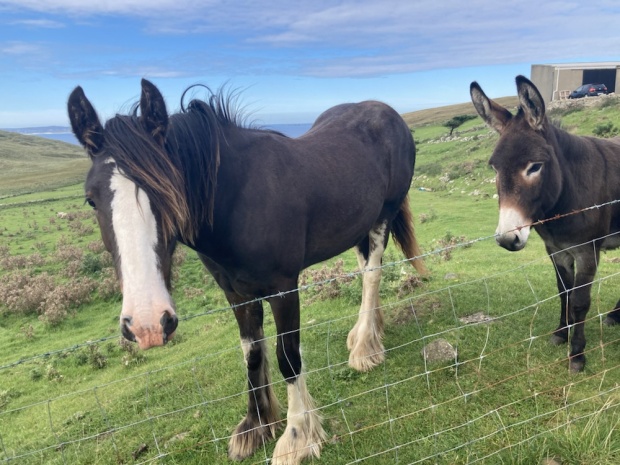 We drove south to the Muckish Gap on route for the Derryveagh Mountains. A spectacular road led us through the valley to the Bridge of Tears where, in the famine and poverty stricken days of the 18th and 19th century, family’s would accompany those heading for the emigrant ships of Derry port. Sad farewells and painful final partings took place here for a multitude over the decades as the departing crossed the bridge with the expectation they would never be seen again.

From a poignant symbol of the poverty of the peasant class to the ostentatious display of wealth and power of the ruling classes at the scene of “one of the worst excesses of Irish landlordism”.

In April 1861 John George Adair or “Black Jack”,who had used money from his slave owning families’s sugar plantations to buy up 16,000 hectares of mountain, bog, lake and woods to create the Glenveagh estate achieved international notoriety by forcibly evicting 244 tenants and destroying their homes. He had a vision for a grand hunting, shooting and fishing fiefdom and having swapped his Gaelic “eyesores” for imported Scottish sheep he had the castle built in 1870 for his new American wife who, unlike her hated husband (dead by 1885), is remembered as a kind and generous person who survived him by another 35 years. The estate lands were bought by the state in 1975 and the castle and gardens were bequeathed to the nation in 1981, becoming Ireland’s third national park in 84.

The gardens around the castle, originally laid out 140 years ago, were divided into a variety of planting schemes, connected by a network of pathways. A walled garden in Jardin Potager style rises up behind the castle where the stone for its construction was quarried and after exploring these we took the high looping View Point Walk to the hillside above. 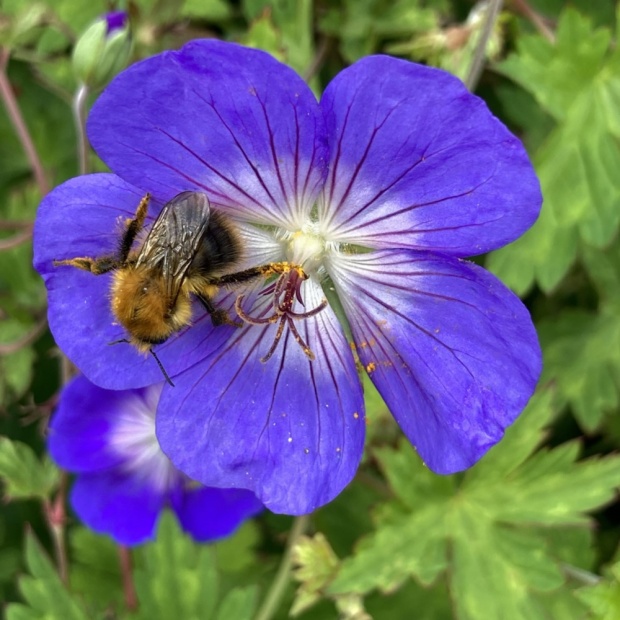 The gardens are part of a National Phenology Network that records the timing of natural events such as budburst, flowering, leaf fall and migratory bird comings and goings to add helpful data to climate change research and agriculture, tourism and gardening bodies. 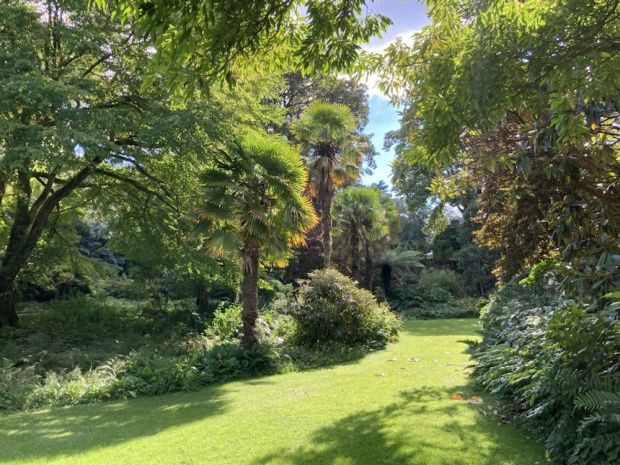 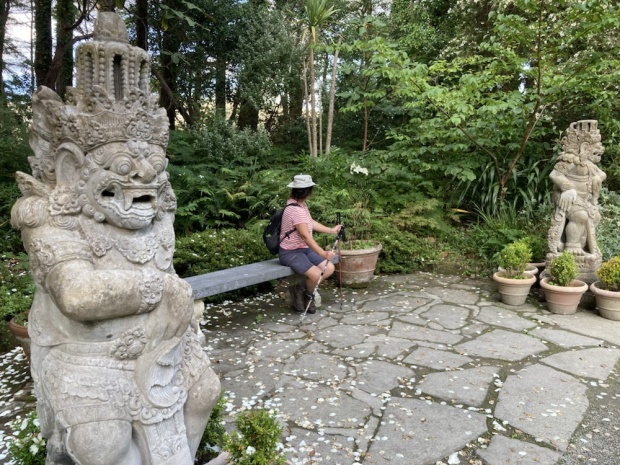 Next stop Gartan Lough on the southern side of the estate where we spent the night after a refreshingly cool swim.

Setting off early to walk the Lough Inshagh Trail back over the estate moorland towards the castle we called in to the birthplace of St Colmcille, the 6th century prince turned monk who went on to found the monastery on Iona. The tranquil spot is marked by a large Celtic cross and a large flagstone decorated with Neolithic cup markings. The ” Stone of Sorrows” was thought to hold a cure for homesickness and loneliness and many emigrants are said to have spent the night on it before leaving Ireland. 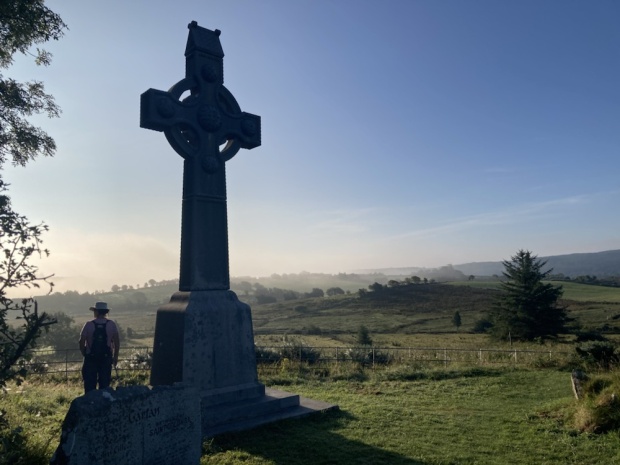 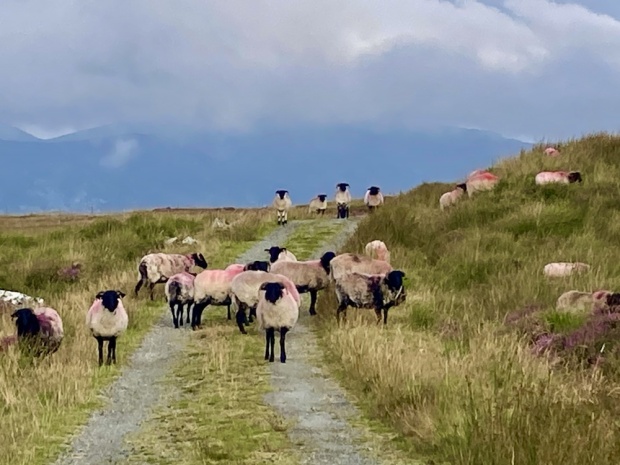 The old estate road that once took the gentry to the Protestant services at Church Hill must have taken much labour in constructing its 7km across the bog and moor, as did the 45km of fence that encloses the herd of red deer. 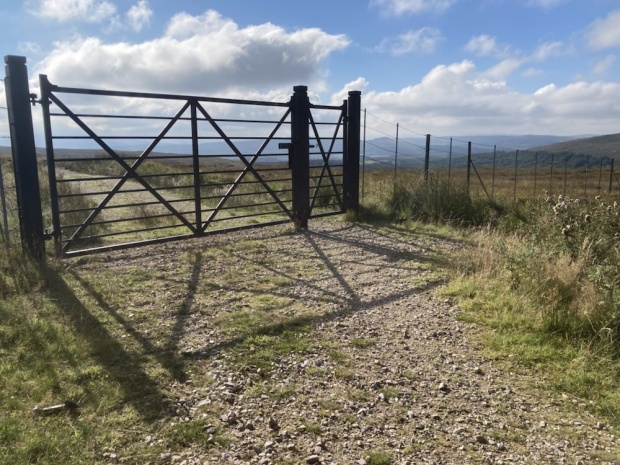 The track was lined with prickly heath or Perettya/ Gaultheria Mucronata an invasive escapee from the castle gardens and clumps of rhododendron amongst the heather did not bode well but on Garton mountain, passed the lake, there were sheltered pockets of old oak and holly woodland. We stopped to soak in the view before returning to the camper and our next treat. 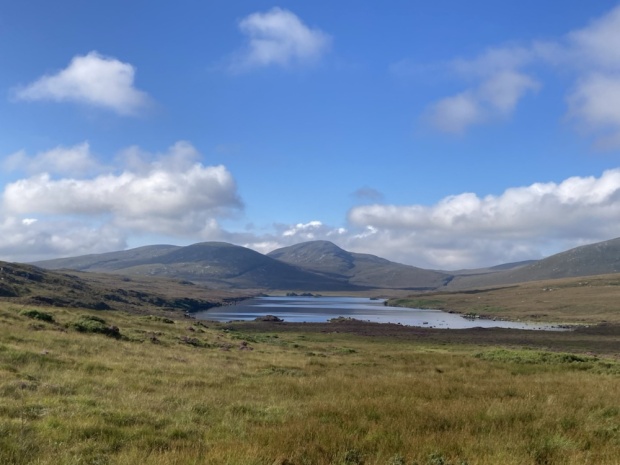 Next to where we had spent the night was a gem of a place unknown to us. Glebe House and it’s large courtyard gallery and glorious lakeside gardens is operated by the OPW after being gifted to the state in 1981 by its owner, the English painter Derek Hill. The Regency style house was built as a rectory in 1828 but became a hotel by 1898, welcoming guests for over 50 years apart from a period of occupation by both the IRA and RIC during the war of independence.

Derek Hill was a very well connected artist who also welcomed guests to St Columbs, as it was known, from the worlds of Arts to Royalty. A keen collector he stuffed his house with all manner of art and craft from around the world and over 300 paintings by leading artists of the 20th century, often bartered or swapped for his own work. He bought light and water to the house and decorated it with original William Morris wallpaper and textiles. We had a fascinating tour of the house before exploring the beautiful grounds while ethereal music mixed by sound artist Sven Anderson from Dereks collection of 1500 operatic and classical records floated from exterior speakers. 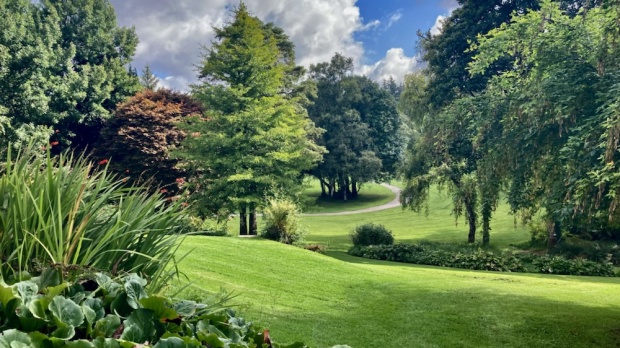 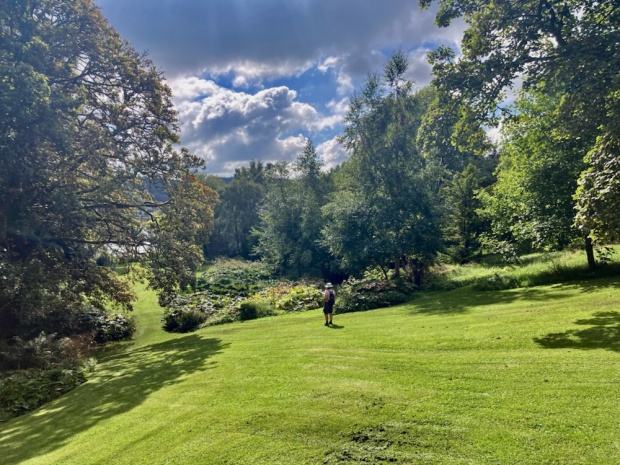 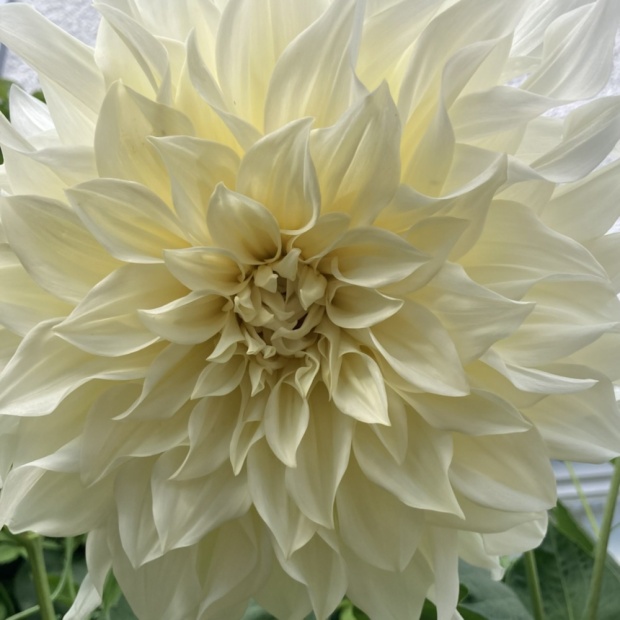 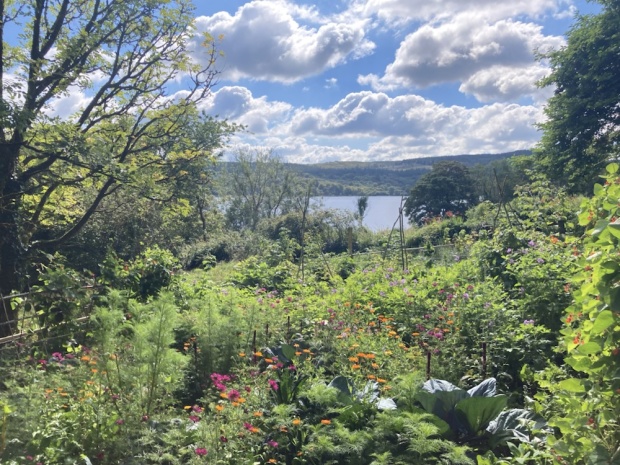 Derek Hill gave his house, garden and priceless collection to the nation 20 years before his death, living in a nearby cottage all that time and frequently joining the tours to see what people thought of it. A real treasure, well loved and maintained with new exhibitions frequently put on in the courtyard gallery, it deserves more recognition. 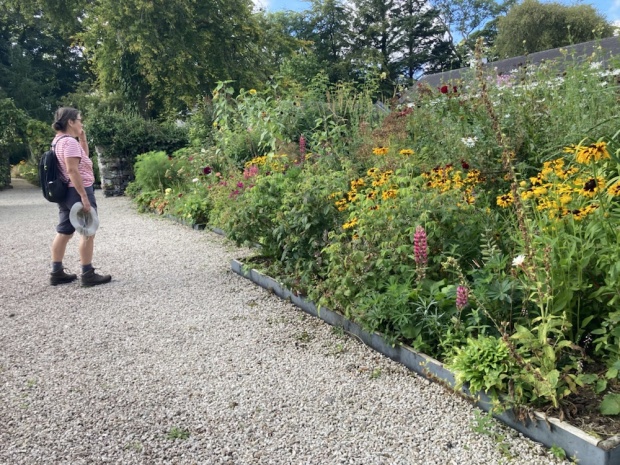 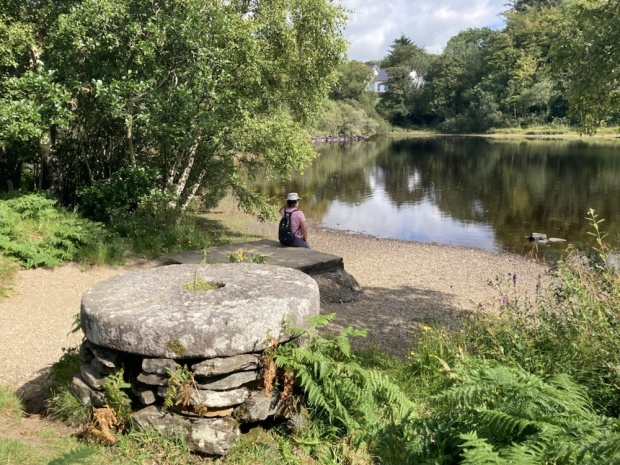 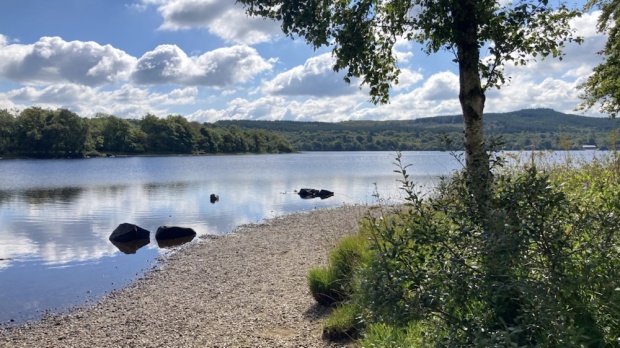 Our last stop before the long drive south was a place we first explored 20 years ago. On the shores of Lough Eske near Donegal town we discovered a ruined castle amid a coillte forest. With trees growing up through the roofless interior and an ivy clad tower the grounds were covered in massive rhododendron from which I took a lot of cuttings. None of them went on to grow into new lives but the castle did. Bought in 2006 by developer Pat Doherty millions were invested in a 2 year restoration of the building built by Thomas Brooke in 1861. The giant rhododendrons are gone but now an extensive 5 star hotel has risen, phoenix like, from the ruins. 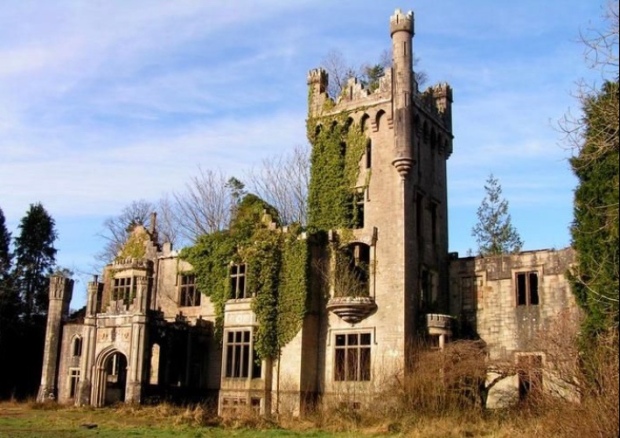 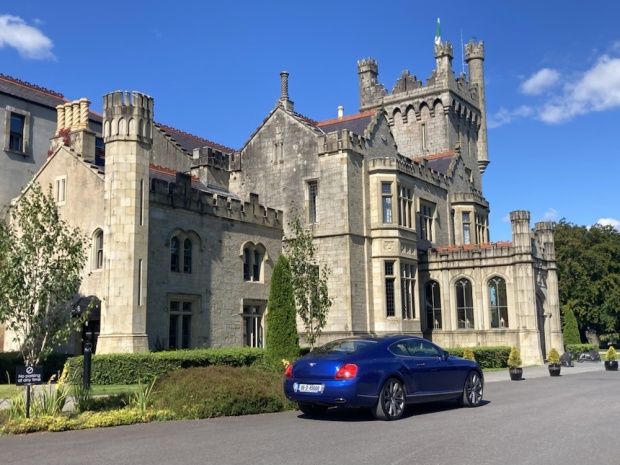 The Bluestack Mountains formed a dramatic background to Lough Eske estate when we went for a cycle and skinny dip before leaving. Once compelled to hiking up them now content to stroll the gardens wrestled from the wilderness by an Ascendancy long gone.