I’m taking photo requests now so when regular commentator Giles asked for, rather bizarrely, more photographs of bicycles I set out to find the best I could. My research led me to an area of the Alpago north of Il Lago do Santa Croce.

There were tales of a legendary bicycle lost deep in the chestnut forest above the village of Sitran for many years that had become one with nature.

Armed with maps and guides and a nose for the curious I eventually found the bike, englobed as the stories had said. I will reveal the evidence at the end of this post to keep the bi (cycle) curious reading.

So after a couple of days in the Alpago mountains looking across at the Dolomites it was time to get in there. The 32,000 acres of the Dolomiti Bellunesi National Park, which was only established in ’93, was our first destination. After what seemed an eternity of strip malls, run down industrial units and hyper markets on the outskirts of Belluno we turned in towards the dramatic profiles of the limestone pinnacles that make up this most beautiful of mountainscapes. 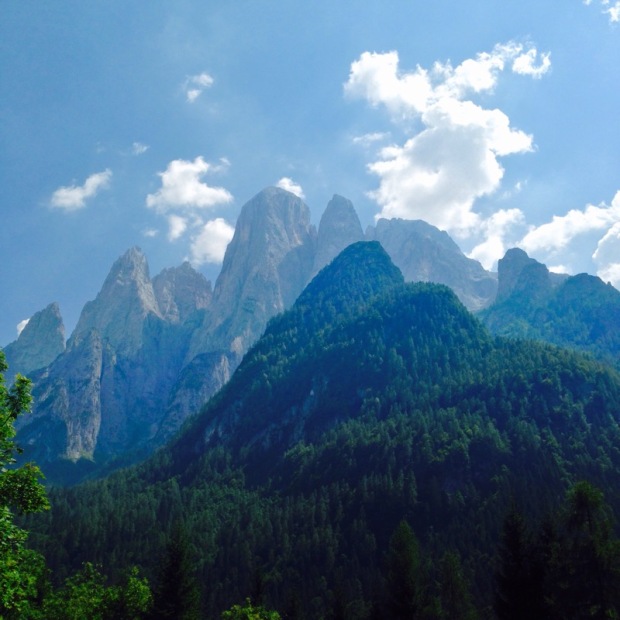 Listed as a natural World Heritage site by Unesco, the Dolomites have been considered special for a long time. The first written descriptions were of extraordinary visions and powerful emotions and used words such as sublime, purity, intensity,grandeur,mystical aestheticism and transcendence.

The first Dolomite travel guide in English, John Murray’s Red Book from 1837 defined the landscape as ” imparting an air of novelty and sublime grandeur to the scene which can only be appreciated by those who have viewed it ”

We have and we can.

We turned off the busy main road and were quickly enveloped in a tranquil valley. The Val de Mis has been dammed and flooded to create a pale blue reservoir with a narrow road on one side. Half way along a rest and recreation area has been created with picnic lawns with shady trees, an exercise and workout zone ( handy in this heat!), a bar and restaurant ( much handier), a bunch of wooden chalets, an amphitheater, an area of hardstanding pitches with water and electricity and shower/ toilets and a grassy free park up by the lake. All good.

It made for a perfect spot for the night with the setting sun turning the mountain golden.

It was a sweet relief to get into the cool water although a bit alarming to realise that the level was slowly dropping to satisfy the needs of the city. There had been no rain here and a heat wave so there wS a lot more water going out than coming in. I kept an eye on a partially submerged rock and the lake level dropped a couple of feet overnight. That’s a lot of water.

Still, most people didn’t seem to want to swim anyway but picnic. Obviously an event of great cultural significance the Italians take it seriously, spending hours over a relaxed lunch in the shade. Or dinner. Some folks came out to play cards before the eating began. 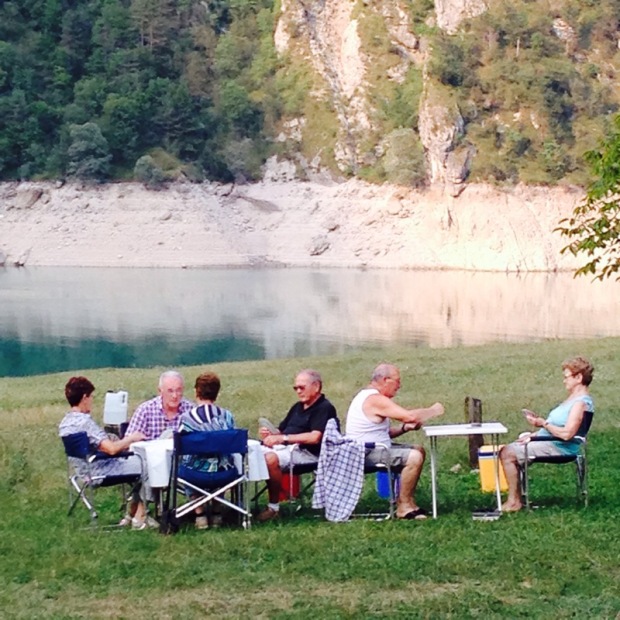 In the morning we hiked up the steep sided lateral valley walls of Val Falcina. More ancient coppice for charcoal the wood was mainly hazel and hop hornbeam, a new one on us but plentiful in these parts. 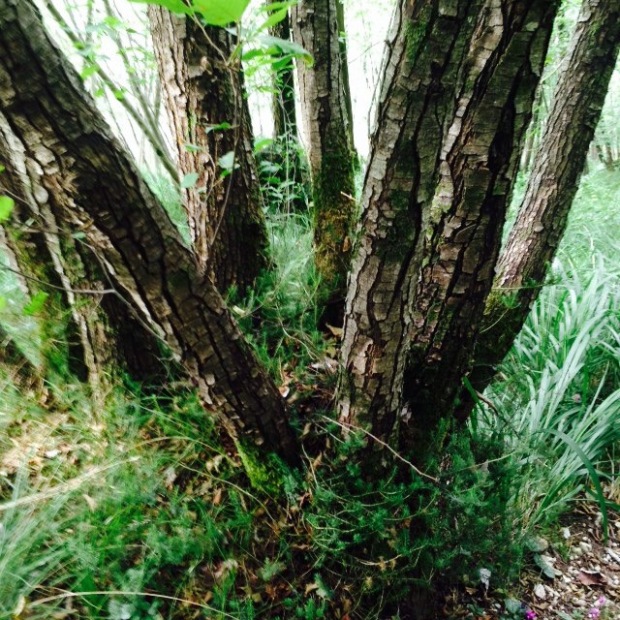 We had spotted an old cable that had been used to get the wood or charcoal down and way up on the trail we found an old motor barrow. 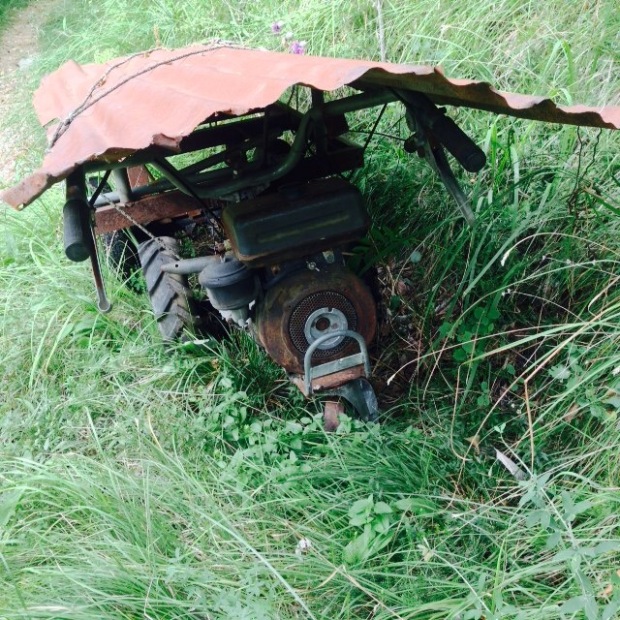 A little later, when we came down to the river we were ” treated” to a view of some stromatolites or layers of petrified tropical algae from back in the day, ( put me straight Milo).

Fossils were found in the dry riverbed among interesting rocks.

The afternoon was spent further up the lake at the Cadini del Brenton, a long series of stunning pools of green water linked by waterfalls.

Some fit and buff athletic types were leaping from pool to pool but others were more sedate.

The pools were described as vortices and there was some great swirling jacuzzi effects. The clouds had been gathering while we were there and eventually the thunder was followed by  the storm sending sheets of heavy rain and hail and sending everyone scurrying back down the hill.

With no point hanging about in the wet we left the Mis and drove north,deeper into the Dolomites, to Val Lucano and with the sky cleared, another great park up. 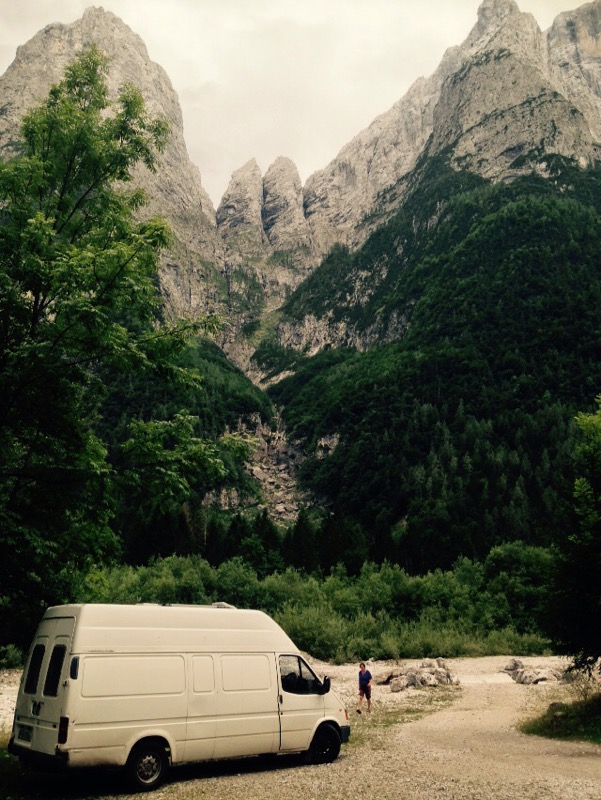 It was yet another picnic area with bar b que’s and tables and benches. We met an Italian couple there who gave us some tips on where to go. The women had lived in Galway and been to Ireland many times. The Italians seem more interested in our licence plate than anywhere else has been and Tranny has been getting many admiring glances.

Sally had had enough of scrambling on rock and slipping on scree so we devised a hike for the next day from the end of the valley up a forest track for 1000m to a col overlooking the range to the north. So, with the heat that was in it, we were off by 7, past the last houses of the village 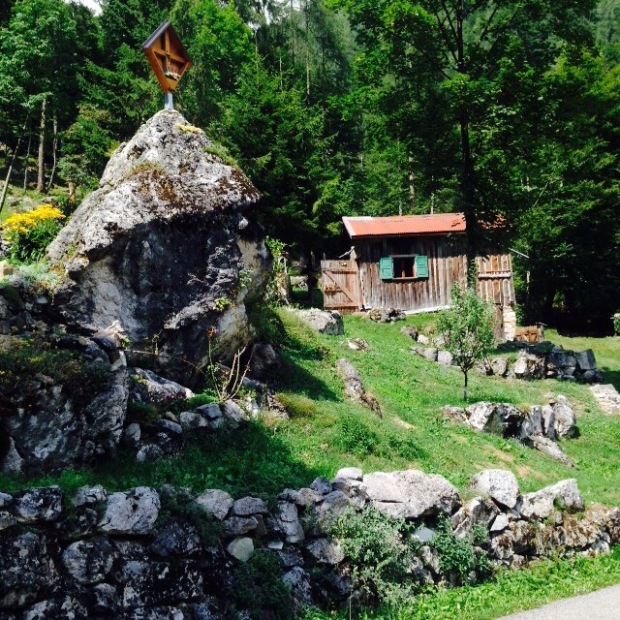 and their tree trunk flower beds 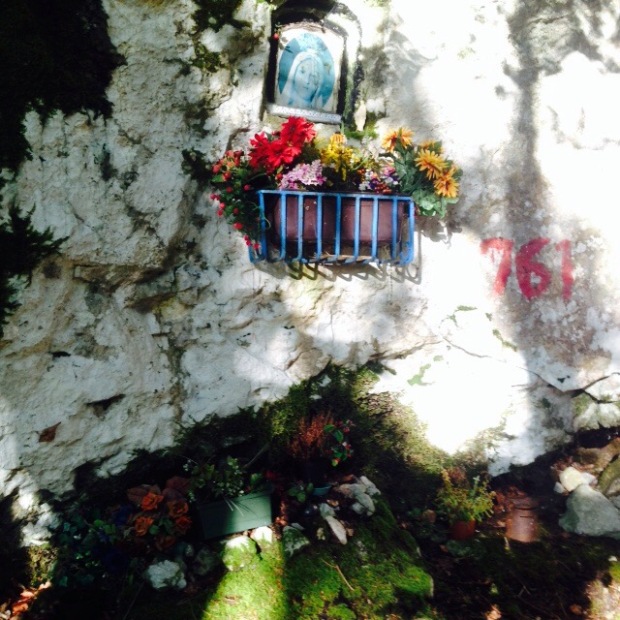 while the landscape through the trees got loftier

and massive cubes of cut stone lying around in a jumble gathering moss.

Switchbacking up through the shady forest we didn’t notice the build up in heat till we finally rose above the tree line for the final climb up across the lush wildflower filled alpine meadows. 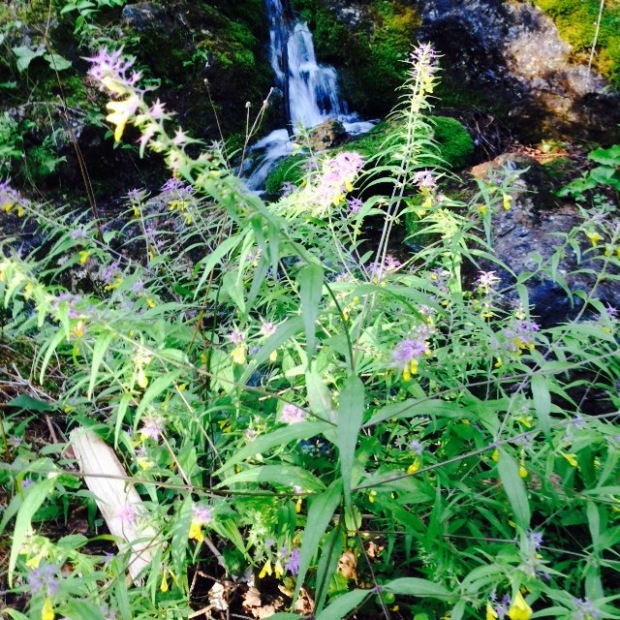 Where there was a mountain hut busy with hikers and bikers and a fountain of cool spring water. The views were worthy of the effort.  In the distance we could see a slither of glacier atop Mamalada, the highest of them all. 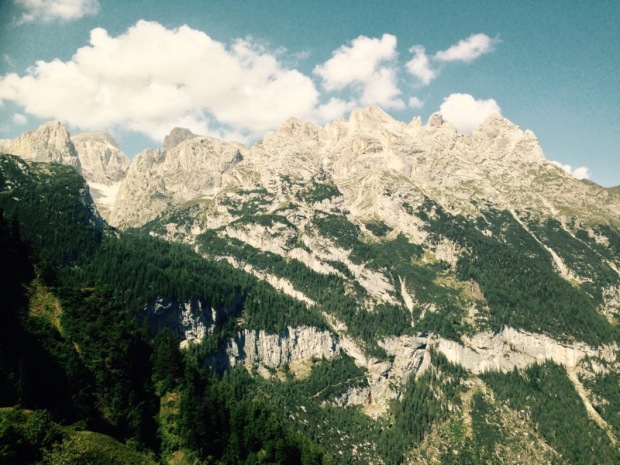 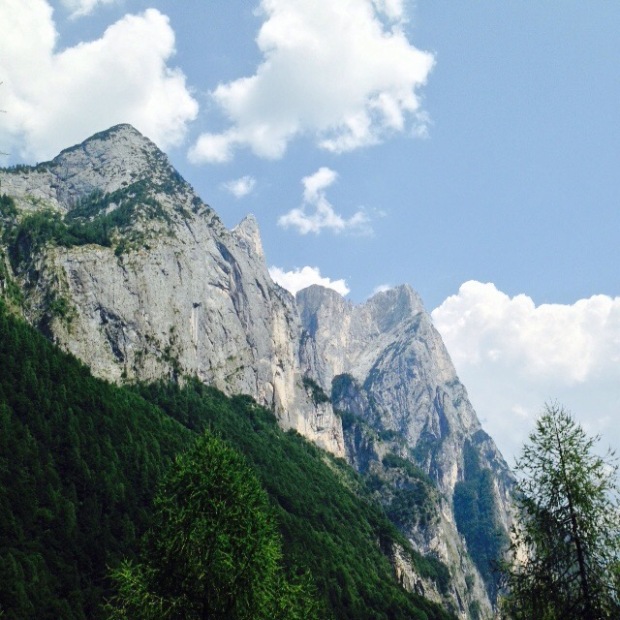 From the Coll paths led into the high mountains in all directions but we were not prepared to go further and after feasting our eyes and bellys we returned to the old mill for a swim in the cold pools.

And above us, in a “privado” area, some new age mud therapy was in progress.

The dogs were also keen to cool down at any opportunity and Toby took to ditch bathing. 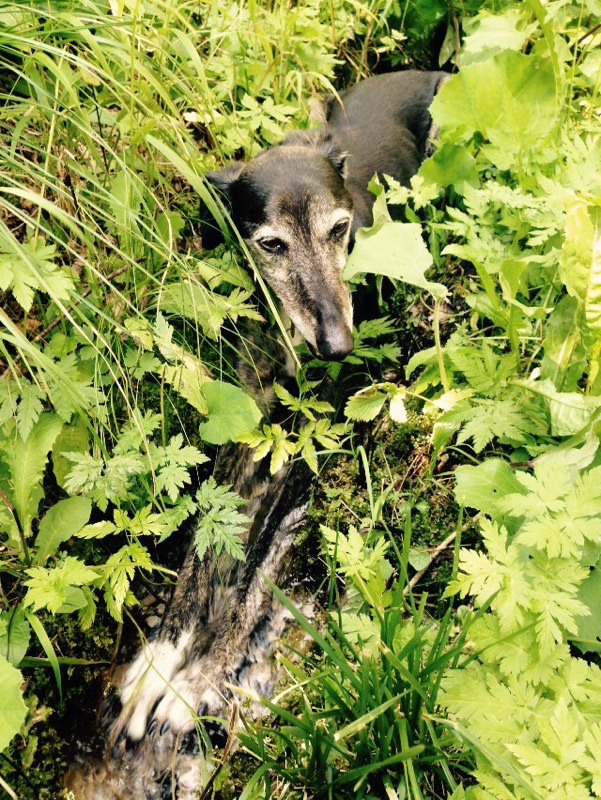 With the heat making day long hikes impossible we decided to check out the cable car up from Alleghe, a lakeside town further north up the road. The lake had been created when a massive landslide had blocked off the valley and the rising river waters had flooded 4 hamlets slowly submerging them. A few years later to add insult another landslide into the lake had created a tsunami that took out a load more homes. But all is tranquillity now and the lakeside made another room with a view.

And finally, the big reveal. The bicycle englobed. By a chestnut tree. 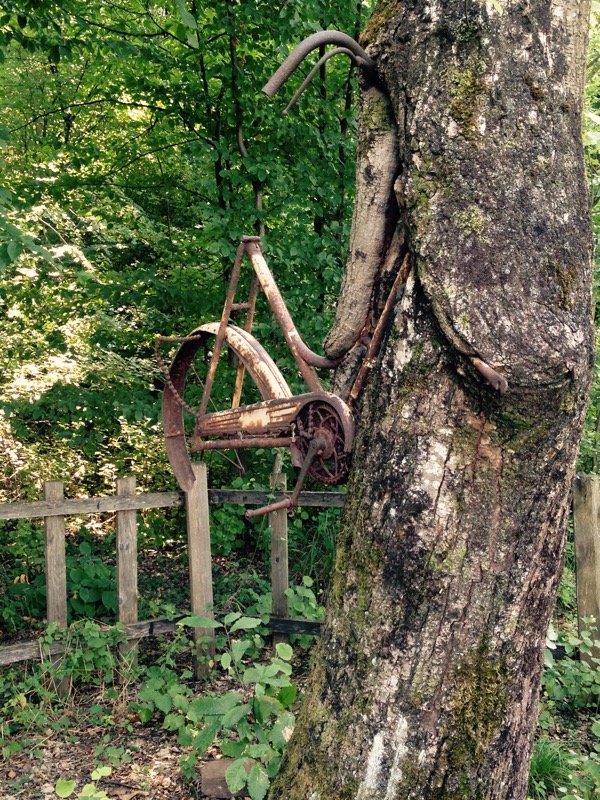