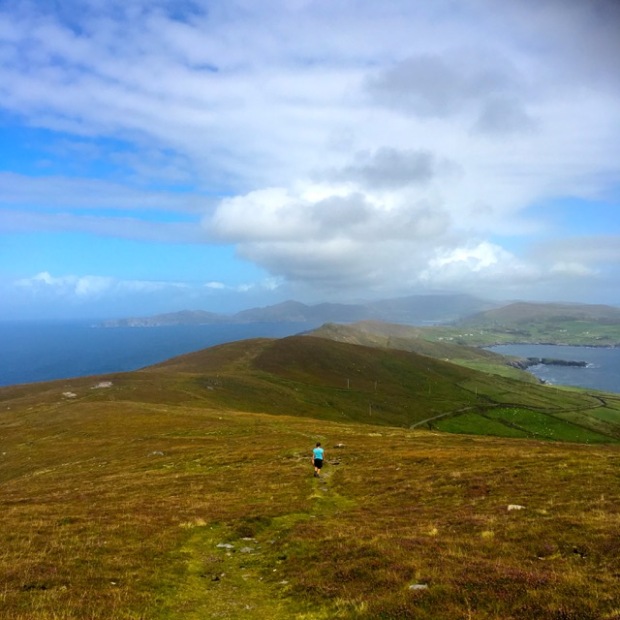 On a trip to our old stomping grounds in the south west to visit an ailing friend we had the pleasure of exploring a couple of places we had never been able to get to. Dursey Island and Dereen Gardens.

Connected to the mainland by the steel wires of Irelands only cable car, Dursey, on a gorgeous  summers day at least, is a stunningly beautiful and tranquil place. 6 1/2km long and 1 1/2 wide it rises from the sea like the whales that swim in the surrounding waters, (along with dolphins and basking shark).

Once home to around 300 people there are now only two permanent residents although the more benign months see an influx of visitors, both day trippers and others staying in the renovated houses in the three tiny villages.

Our long drive down from Galway became seriously rugged when Serena, our sat nav, decided we would be up for some off roading  beyond Eyeries and sent us up a switchback track, through a couple of luckily unlocked gates and onto an old mountain pass that is now part of the Beara Way walking route. We couldn’t imagine how a well heeled tourist in a hire car would have reacted to the directions. 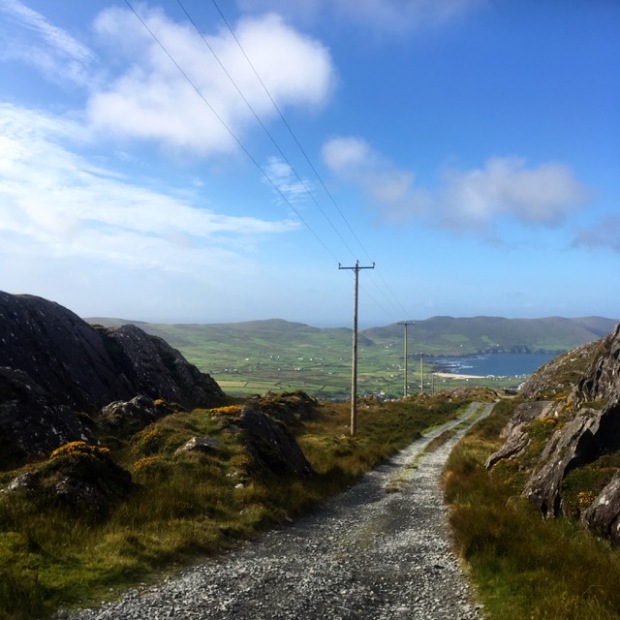 Keen to take full advantage of the fine weather we pushed on the remaining 10km to the end of the road where the signpost indicated a long swim would bring us to the mystical land of Tir na nOg. 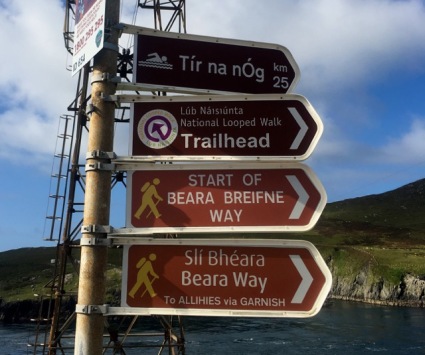 As you can see this also the starting point of the Beara Breifne Way, a 500km hiking route linking up 12 separate Ways that finishes way up in Leitrim and Cavan. This follows the route taken by Donal Cam O’Sullivan Beare, clan leader and Lord of Beara, and 1000 of his remaining followers after horrendous defeats in the Nine Years War. 2  very tough weeks later only 35 of them arrived at the allied O’Rouke castle in Leitrim.

Dursey is the trailhead of an even longer walk. It is the beginning of the European E8 that ends in Istanbul 4,700km further on. The Irish leg is about 600km. Making it’s weary way along half a dozen Irish Ways to Dublin and then across Europe we did a bit on the South Leinster Way a few weeks ago and a tiny bit in Slovakia last year.

In 1969 Dursey became one of a very few islands anywhere to be joined to the mainland by cable car. It made sense as the water separating them is well known for it’s dangerously strong rip currents and hidden reef. Storm waters can make a boat trip inadvisable for days on end so the cable car is a reliable means to transport nearly everything.

6 people, 4 sheep or 2 cows at a time, the car sails 80 ft above the waves in a quaintly dishevelled fashion with a little swaying and creaking and the passing view visible through the gaps in the floorboards.

Arriving shortly at the islands station ( stuffed full of sacks of sheep wool for the export market) we headed off on our 14km hike.

This was our third visit to an island this year and yet again it fuelled fantasies of an extended stay in a simple cottage, watching the weather approach across the atlantic, bird spotting, whale watching and producing a book or paintings or photography exhibition, or maybe merely reaching a state of true enlightenment.

Stone built tables and benches had been erected on the way to encourage the contemplation necessary to achieve the higher consciousness by imploring us to “sit down and take it easy”.

It hadn’t always been such a peaceful place however. We were looking out over the scene of the “Dursey Massacre” where 300 women, children and the aged of O’Sullivans clan gathered, ironically, for their safety in his castle stronghold were attacked by English forces and, tied back to back, were hurled from the cliffs or shot by musket. The chieftains family vault is in the graveyard of the monastic ruins of St Marys Abbey lying below us. 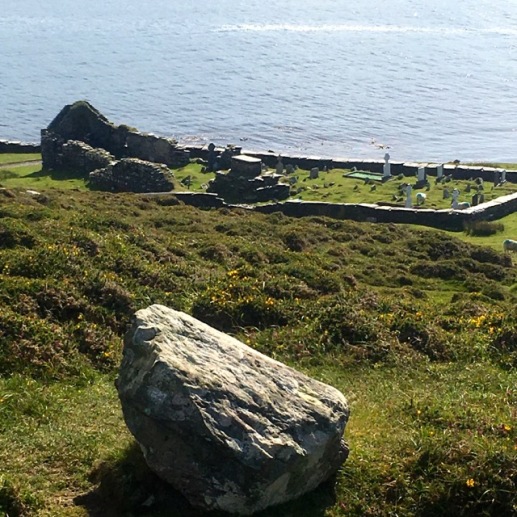 Maybe the first, Neolithic, settlers had a tranquil time of it erecting their standing stones and alignments but the Vikings bought trouble and strife by using the island as a holding pen for the Irish slaves they had gathered before shipping them off to their fate elsewhere.

All was tranquil as we walked the islands only road up towards Ballynacallagh, the first of the 3 little villages that punctuate the route to the west end. 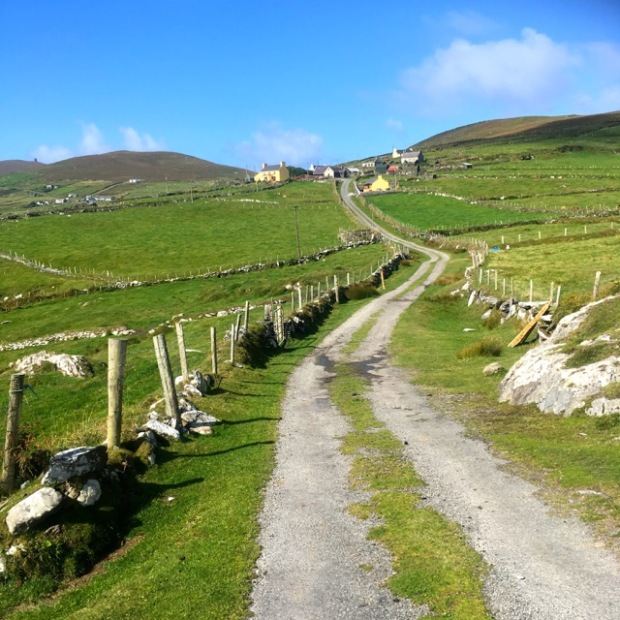 The fields on either side, covered with a swathe of rich green grass, were fenced and grazed by cows and sheep but didn’t seem to have the old potato ridges that had been so prominent on our visit to Inishkea last month. Unlike that island there were quite a few smart homes in the villages, which have the luxury of electricity and water, but also many abandoned old stone farm buildings stoutly built to withstand the wild winds and driving rain. 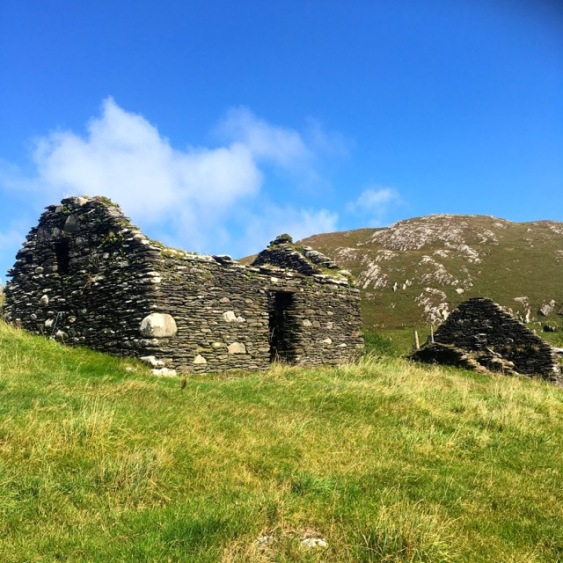 The sea glinted in the sunshine and the clear ozone filled blue sky meant we could see across it to the mountains of the mainland and the Sheeps Head and, dimly in the distance, the Mizen peninsulas.

We had past a surprising number of rusting cars resting or rotting by the wayside but I guess once they had made the crossing by boat they weren’t going to be worth the expense of a return trip. Used by the local landowners to tend their stock they didn’t seem to need tax or test and there was little danger of collision on the single lane track only shared with a summer mini bus that shuttled tourists from one end to the other. 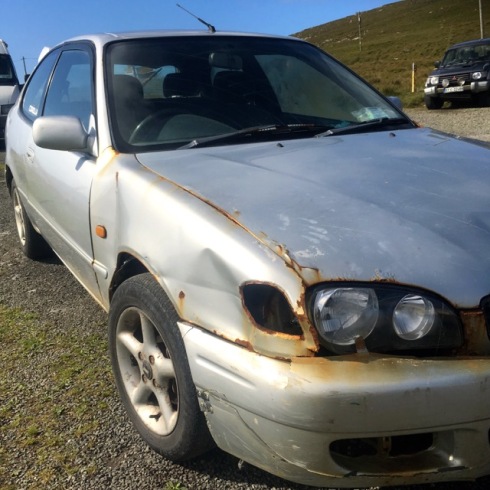 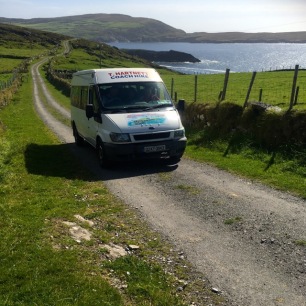 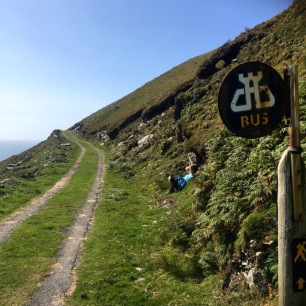 The island was almost completely tree less although one fenced farmhouse garden we saw as we neared the final village of Tilickafinna proved it was possible to grow sheltering scrubs and the end house had a little plantation of pines struggling against the wind.

The tarmac ended and a path led on, up the open hillside, to our first view over the sea to the north and the islands of Bull Rock  and The Cow.

Bull Rock had an automated LED lighthouse nowadays but the old keepers house could still be seen on the summit of the sheer tower of stone. Easily desending towards the western head over the springy but shallow turf another old lighthouse appeared clinging to The Calf, a much smaller island that was overwhelmed by a storm in 1881. 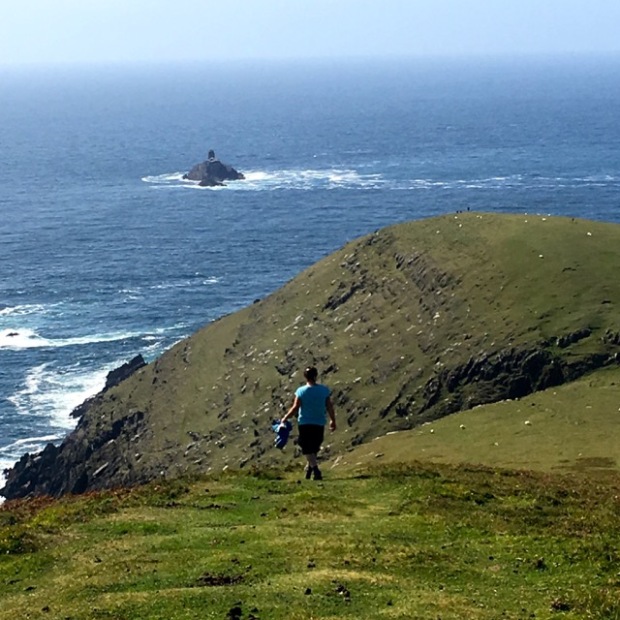 At the tip was a fine cut stone building whose purpose is a mystery to us but maybe connected to the Napoleonic signal tower that topped the island. The waves crashed relentlessly on the colossal slabs of rock that are favoured by all manner of nesting seabirds including at times visitors from both arctic and mediterranean waters. 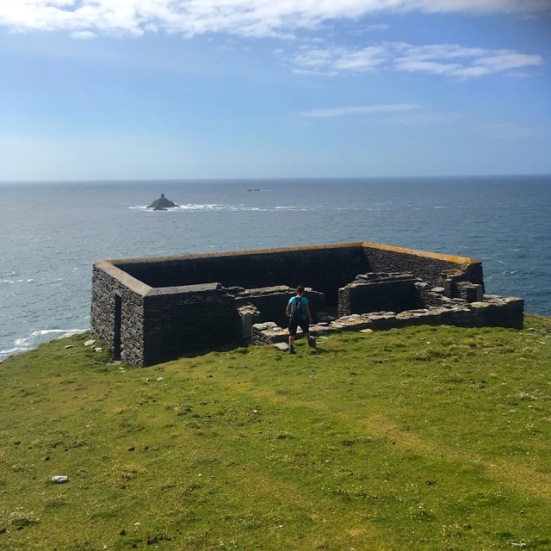 It was a place to savour and the hypnotic beat of the sea and the hazy divide between the earth and the heavens induced a feeling that the sign to Tir na nOg was possibly accurate.

Finally turning away we retraced our steps to Tilickafinna and started up the steep slopes of the islands high point rising to 252m with the 2oo year old signal tower still waiting for an invasion.This was the site of another giant EIRE layed out in whitewashed stones to warn WW11 pilots they were heading over neutral territory. The third we’ve seen this summer, but only the third we’ve seen in 3 decades of exploring the west of Ireland.

The undulating spine of the island was laid out ahead of us, the broad ridge offering us serene views in all points of the compass. Atop the next rise we stopped to puzzle over a small area of denuded ground, with the turves piled and covered, and a neighbouring patch of turned sods. Some experiment in erosion and regrowth ? 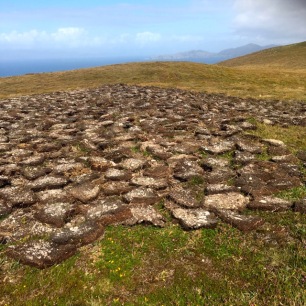 The coating of soil was certainly very thin but seemed tough and well drained and supported a fine crop of dwarf gorse and heather, both vibrant in the sunshine.

An ancient, skilfully constructed, ditch and wall ran beside us with stonework that would not have looked out of place in a gallery but was a beautiful and effective sheep barrier. 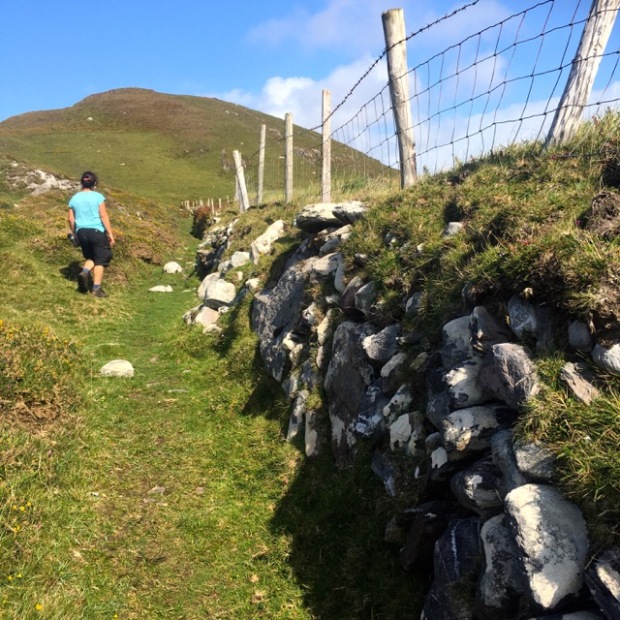 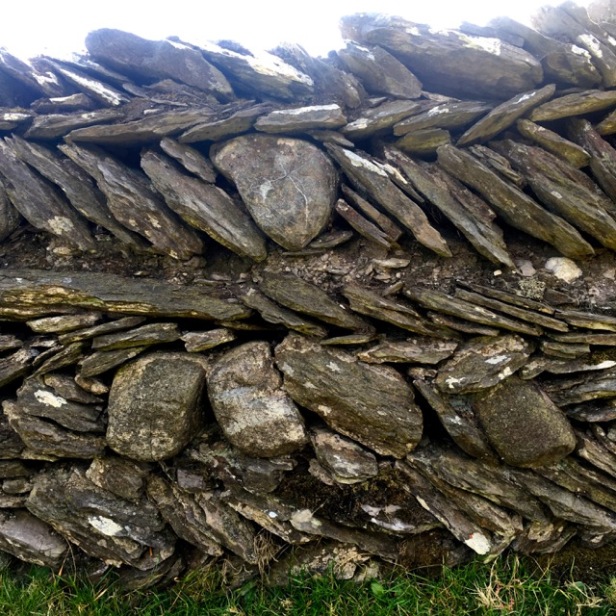 Looking back up at the signal tower it was with a slight sense of regret that we climbed the final hill and came back down to the sound where we watched a lobster boat being tossed about in the swirling gyres while waiting for our ride to the rest of Ireland. 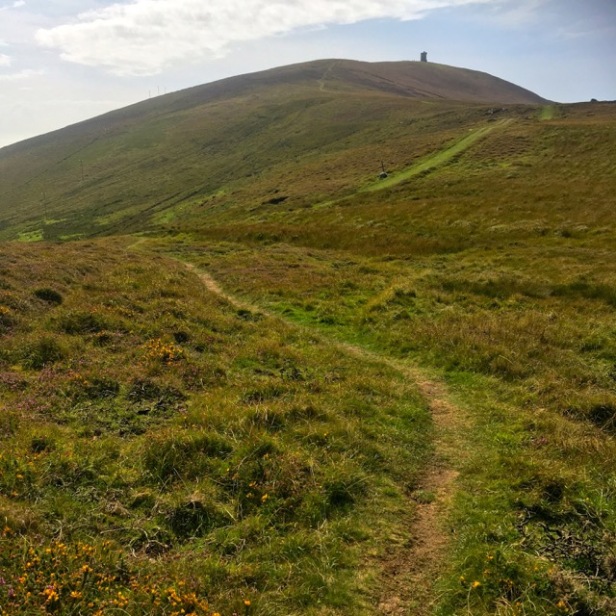 Driving away from Dursey we had one more sight of an island artefact. A few miles down the road the old cable car was now serving as a chicken coop in a farmyard garden.

We parked up for the night outside Allihies at the site of an old copper mine and marvelled at the bands of rock making Knocknagallaun into a really groovy mountain.

I’d read about a mine collapse around there recently,suddenly  creating a hole big enough to swallow a couple of tractors so was a little wary of the ground opening up beneath me but had to have a look at the copper streaked quartzite seam that been extracted from the old red sandstone during the days of this short lived but large scale local industry.

A fine night slowly segued into a misty morning where the low visibility made the WAW signboard useful for determining our whereabouts.

The day was spent with our friend in Castletownbere and the night at the top of the Healy Pass hugging the sheltering mountainside as a gale funnelled through the cleft in the rock that the serpentine road wound it’s way through.

The 8 mile road was built during the famine times in 1847 “to help prevent starvation”! from Adrigole Bridge in Co Cork to Lauragh Bridge in Co Kerry on the route of an ancient track known as Bealach Scairt, The Way of the Sheltered Caves, and the pass was the county border. At dawn the following morning I set out up the dividing line in an attempt to scale the 2nd highest peak on the peninsular, Knockowen at 658m.

The line from the Thin Lizzy song Whiskey in the Jar was reverberating in my head “As I was goin’ over the Cork and Kerry mountains”and the light,very slowly, revealed a wild landscape of rock and bog. 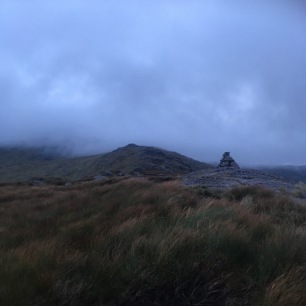 As I climbed higher Glamore lake and the Kenmare River estuary to the north came into view but i was soon in the clouds and decided the summit, lost in the mist, could not compete with the breakfast that awaited in the Tranny and retreated. 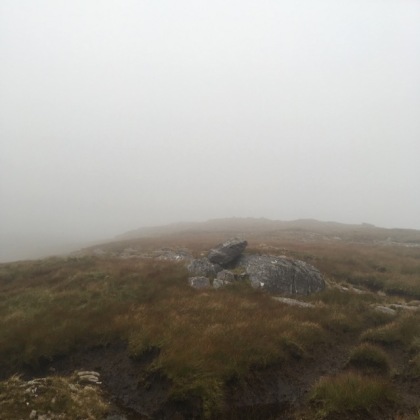 And so to our second destination of the trip, Derreen Gardens, nestled into 60 acres of a sub tropical like sheltered cove at Lauragh. In 1870 the Marquess of Lansdown embarked on an ambitious plan to transform the bare rock and scrub oak around his house into a luxuriant woodland garden. As Viceroy of India and Governor of Canada he was able to bring back many exotic specimens and many of the trees and rhododendrons in the gardens were planted at that time. The mild moist microclimate is ideal for the huge collection of tree ferns that line the 12km of paths we explored, winding through the slabs of sandstone down to the seaweed shoreline where seals and otters are often seen. 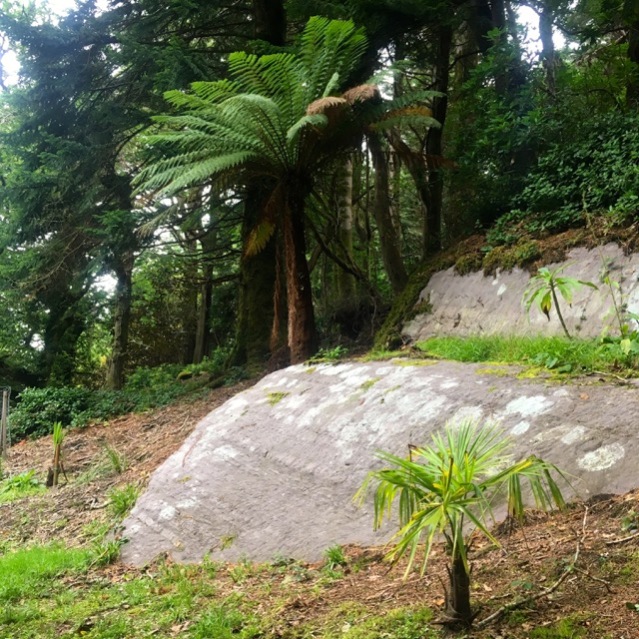 This is one of the few places where the “little people” live. Called Derreenies they are elusive folk and the last known sighting was in 1855. It was fairly easy to spot their houses amongst the mossy boles but they often seemed vacant. 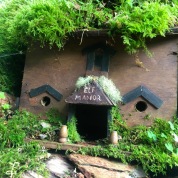 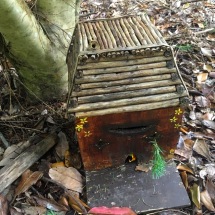 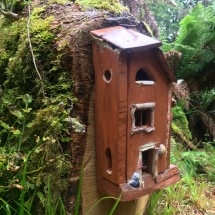 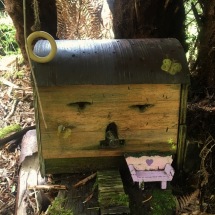 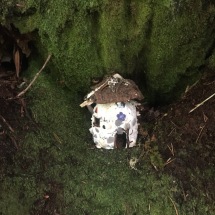 It was a still and dreamy environment of which I have little to say other than to recommend a visit if your ever in the vicinity. 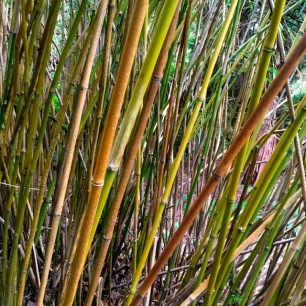 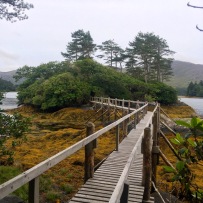