A crystal clear starry sky all night, and the tips of the white towers that encircled us slowly shining as the rising sun threw shards of light above the valley and the wide pale moon just sat there watching.

I hadn’t been on the pipe. That’s how waking up at the top of Slovenia sounds.

But we turned our backs on all the magic and headed out towards the border and as fate would have it our very last encounter with the country was a surreal alternative to the impression we’d had. Realising we had Slovenian stamped postcards to send we pulled into the big building before the border and asked them to add it to their post. We didn’t stay to play. 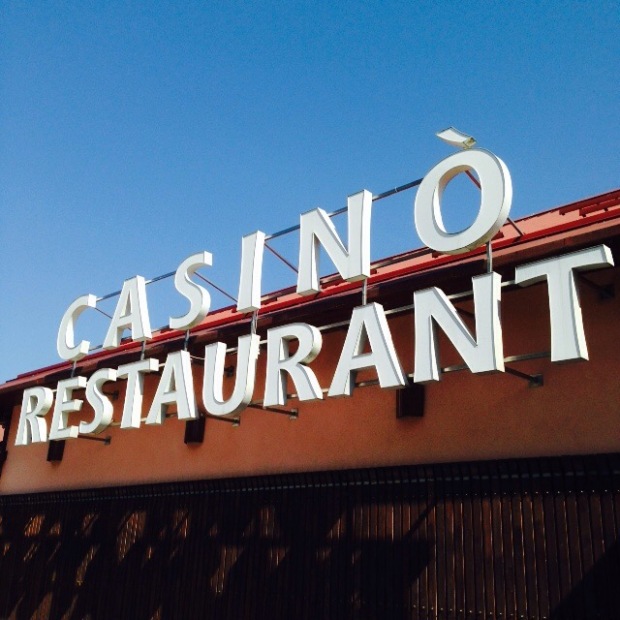 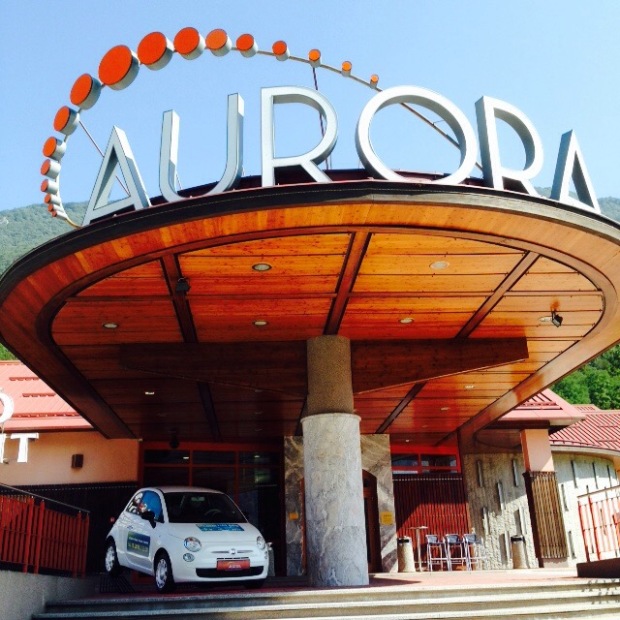 Arriving in the first place to restock supplies in Italy was also a culture shock. After 2 months in former Soviet block countries the wanton consumerism was impressive. With a huge amount of style and bling.

We don’t have these kinds of artworks outside Supervalu. 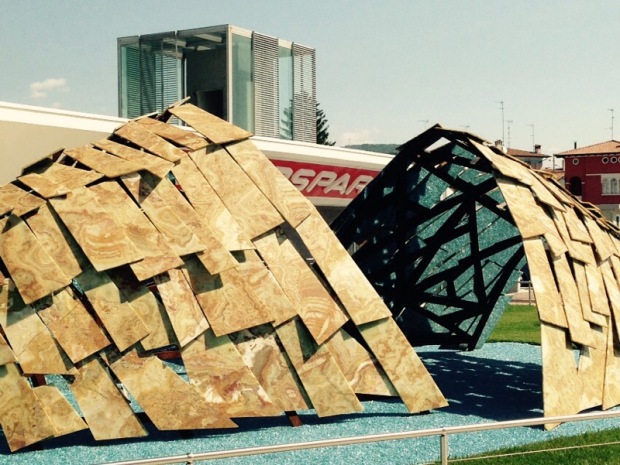 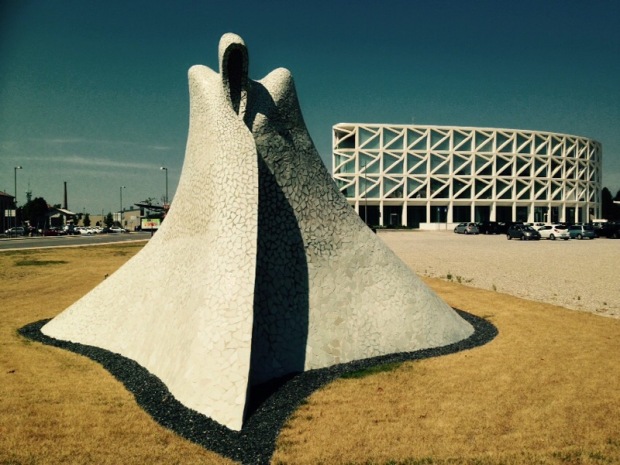 But style has been big here for centuries and the old city centre streets are a crumbling fading warren of urbane perfection. 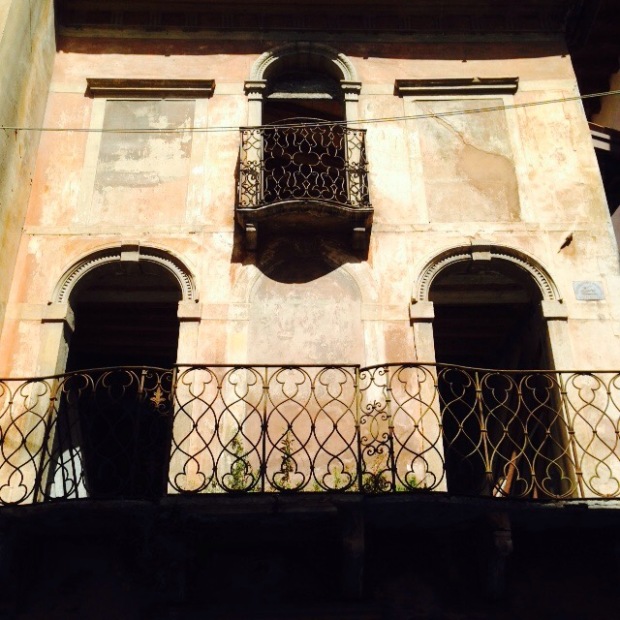 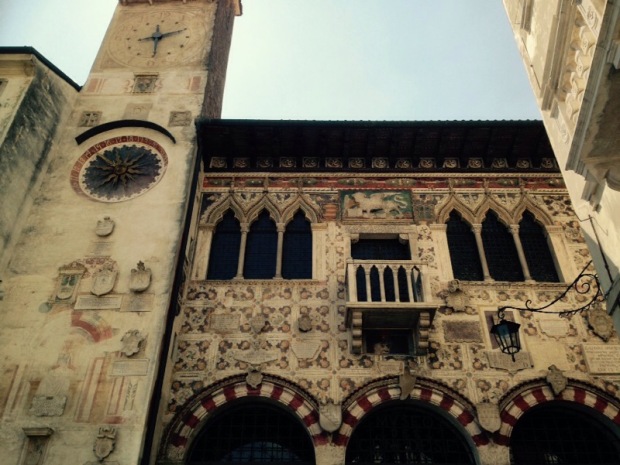 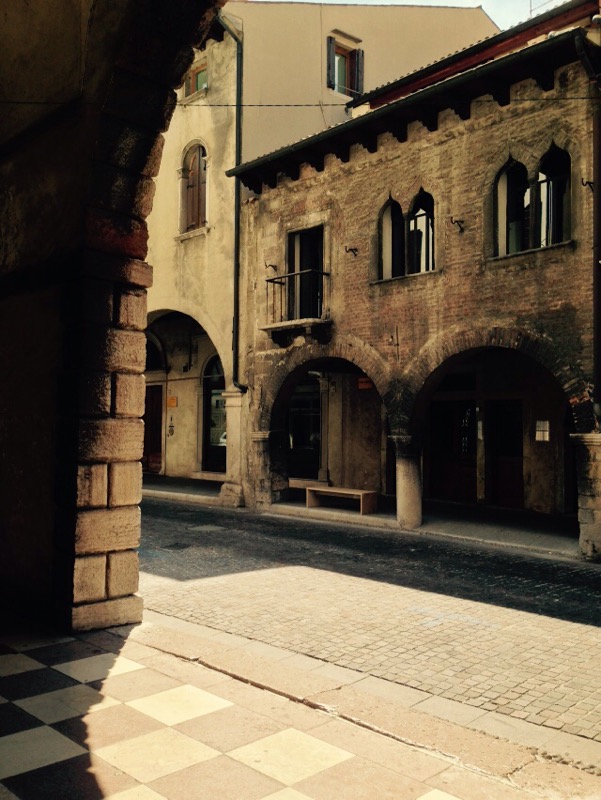 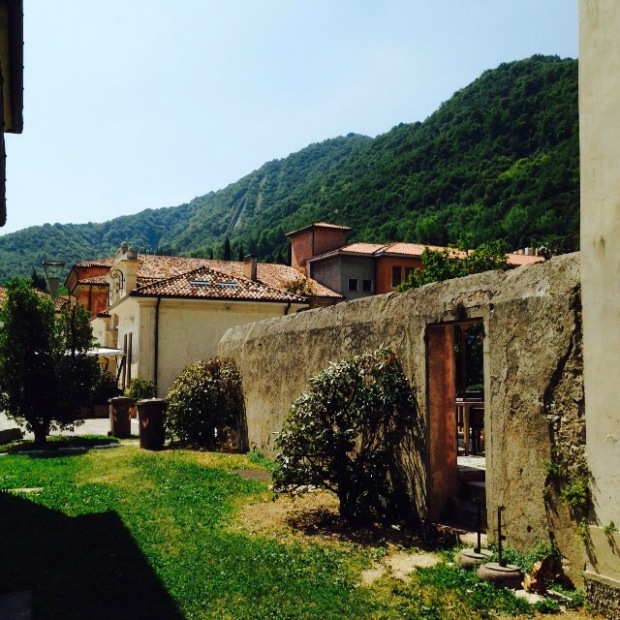 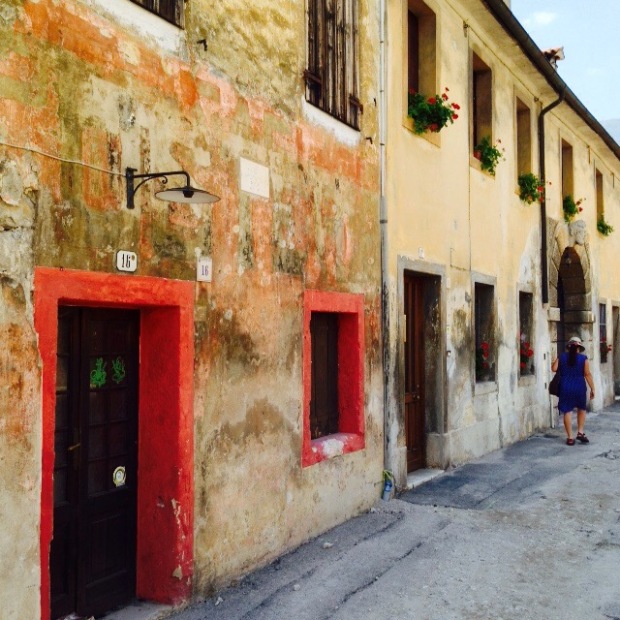 And they know how to keep their melons cool. 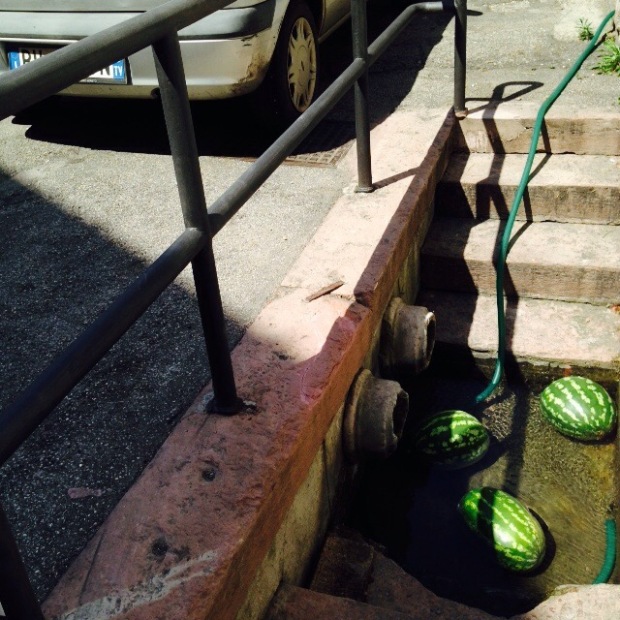 I’m sure the rain lashed brethren back home in Eire don’t want to hear about it, but it’s a battle to stay cool here. We had to make an emergency stop at the Lago Morto ( does that mean Lake Dead ?)

an emerald green hydroelectric reservoir with the mighty legs of a motorway stepping around it, but still heaven in its heatstroke saving cool. 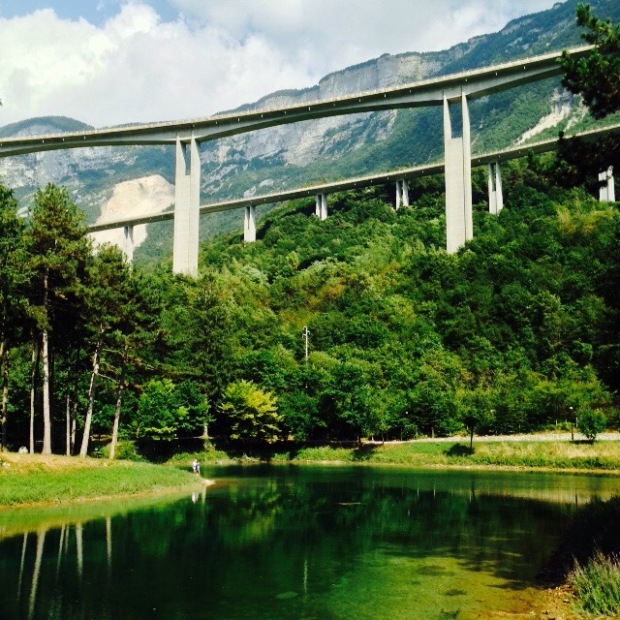 We headed for the hills again, to a free municipal camper park up in  the village of Tambre, 950 m up in the Alpago mountains, overlooking the big blue Lago do Santa Croce and the bulk of the Dolomites, our next destination.

Armed with local route maps from the lovely, if somewhat flirtatious, lady at the tourist info we devised an early morning 4 hr hike up into the wilds. 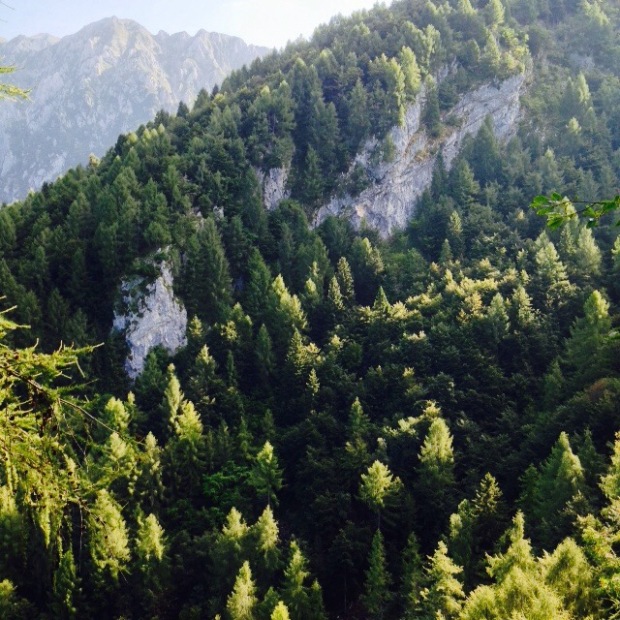 All went well until we got lost on the return due to poor, wrong and missing signage and a spiders web of possible tracks. I might have to go back to tourist info.

Skilled mapmanship got us back on track passed sad ruins and through thankfully shady forest.

It wasn’t all abandoned either. Lots of the old places had been done up and new hamlets were appearing with the ever present finger bar mower, which along with the tiny tractors and trailers, I would love to see at home. 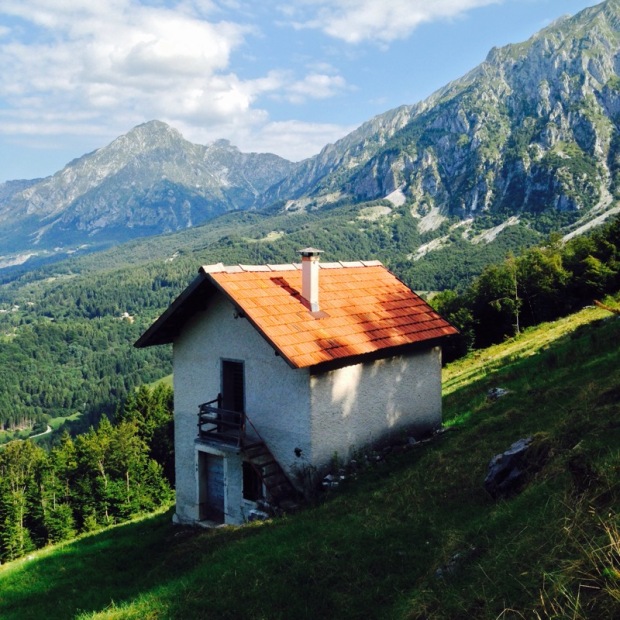 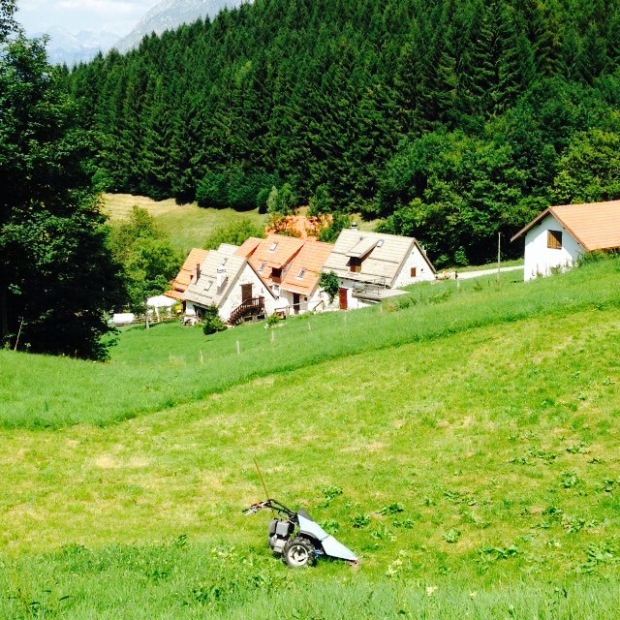 Finally arriving back at base we drove along the high tableland of the Consiglio forest, a wonderful area we had happened upon of thousands of hectares of mixed woodland, mainly beech but also stretches of conifers that are popular with shade seeking picnickers. 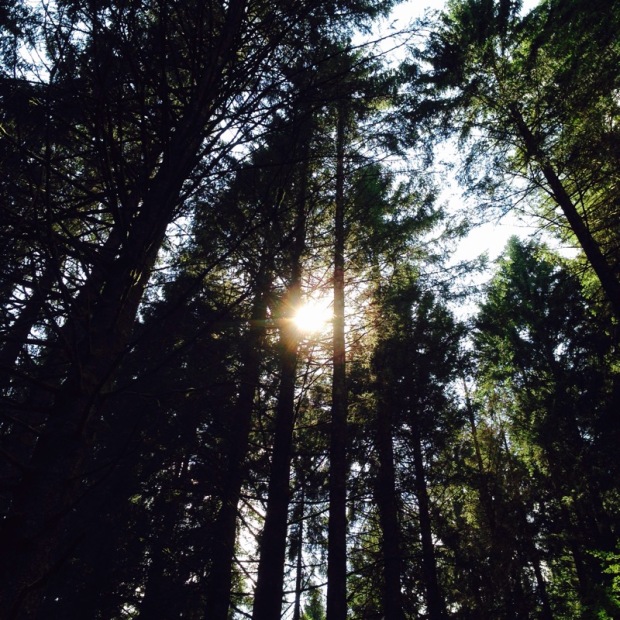 Lots of mown grass, tables and benches and fresh water are all laid on to aid the enjoyment of the forest. Coillte have some catching up to do. While we were there what looked like the Italian national squad came past.

A little further into the forest was an ethnographic museum that although frustratingly only in Italian had great exhibits about the forest folk. The Venetians of the 15th century used loads of the beech for oars and boat building.

And later on a huge industry of wood work developed particularly the making of beech strips 1/4 in thick for use in loads of stuff. 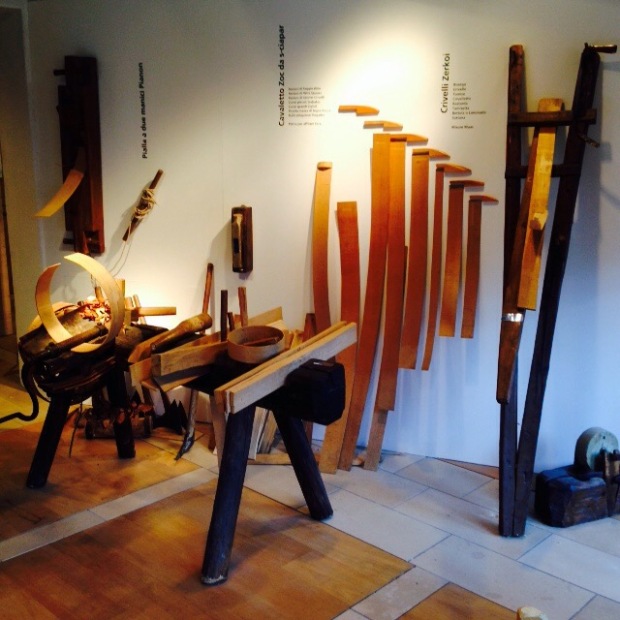 And we met the charcoal makers.

Really interesting displays on water powered saw mills, ariel runways for the lumber, tools and houses etc etc. And we didn’t understand a word. Even showed us timber dam construction.

No nails involved of course.

But we had a date with the big stuff in the morning. A 1000 m climb from the highest park up we could find to Rifugio Seenza and the Laste saddle. And a more beautiful sunset camp you couldn’t wish to find. 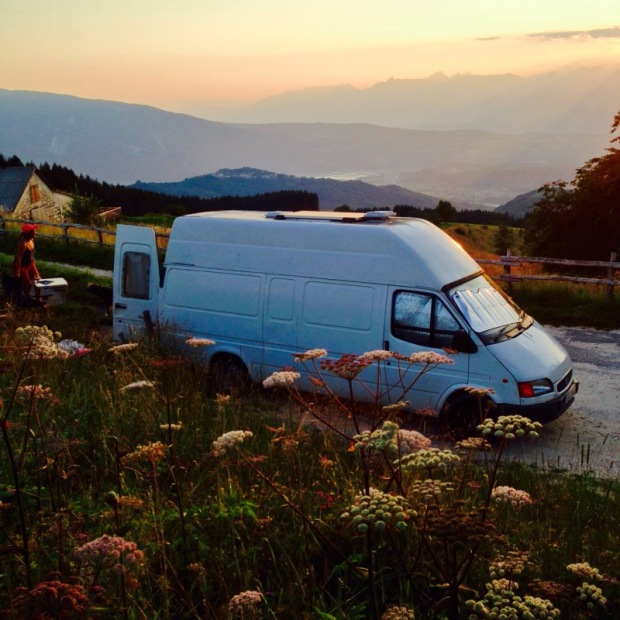 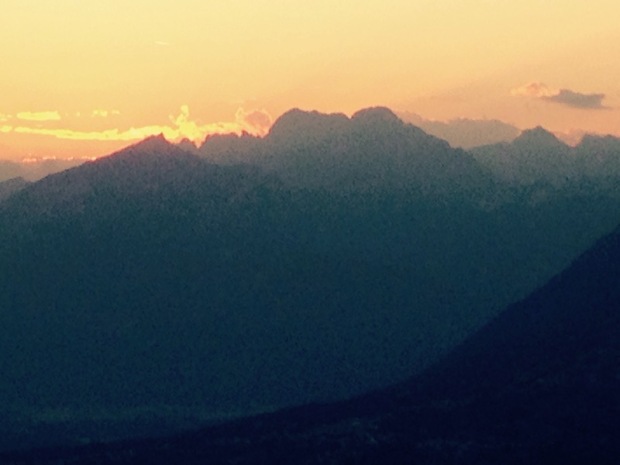 A more or less circular 5 hour route we needed to start early to avoid the heat, so the kettle was on at 5.30 and a hiker had already gone past. We had decided to go clockwise which meant a long steep climb to start, but in shade, followed by a more gradual traverse of the high cliffs and a steep descent from the summit on the way back that would quickly get us into shady forest.

The cloud had nestled into a bowl in the middle of the forest that bury off as we climbed.

And then we were over a shoulder, above the tree line and another world revealed itself. 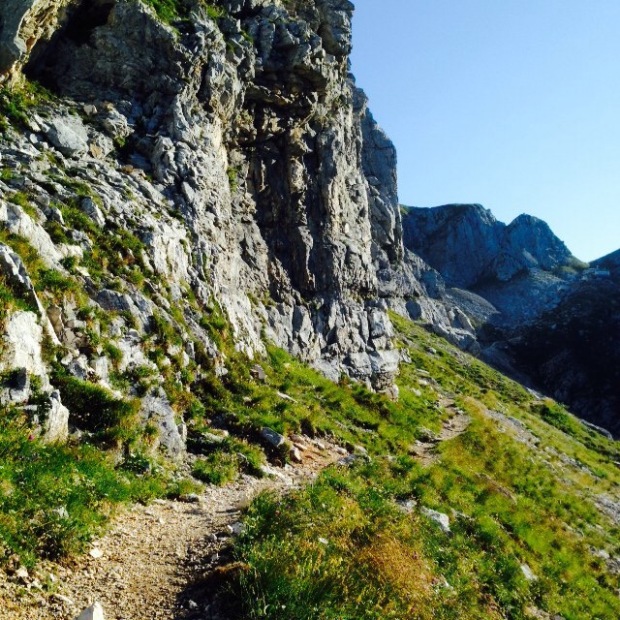 We heard sheep as we approached the refugio but it took a while to spot them high on the wild flower slopes. 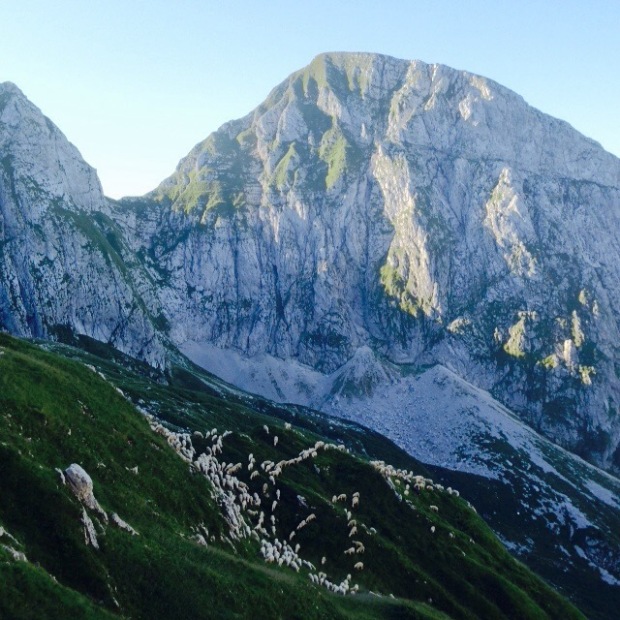 The shepherd and his dog were keeping a watchful eye from the balcony where we were grateful of a coffee and rest.

The real splendours awaited us at the Coll another 15 mins higher where the emergency shelter was reassuringly rugged. 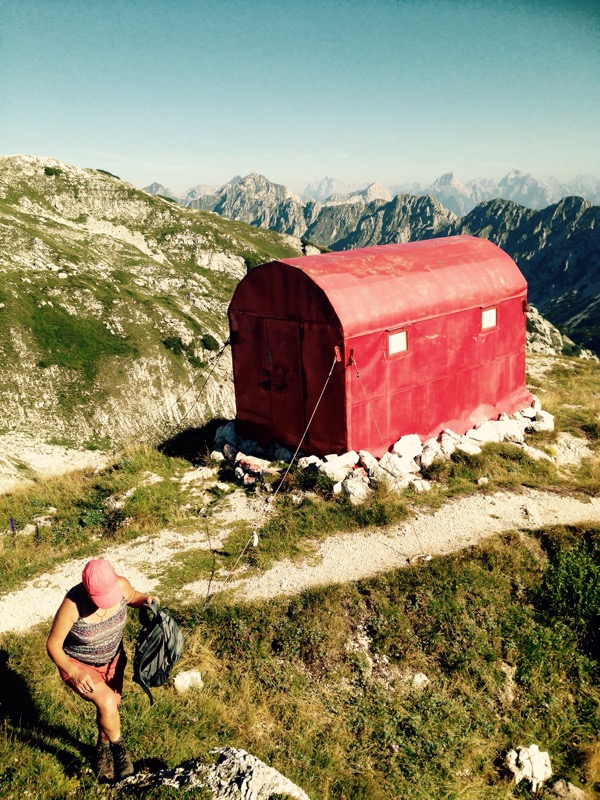 The views, of miles and miles of mountain ridges, was jaw dropping and had to be taken in bit by bit over time to avoid a rush to the head.

My love affair with the Julian Alps was in jeopardy, I had a new mountain mistress.

Time to go down before we got giddy.

On the way we passed a huge erratic and madonna shrine were we left an offering to mark the life of a friend cut short untimely like his brother’s before him.

And on down to the peaceful cathedral of beech stippled with light and adorned with snails in a tight embrace. 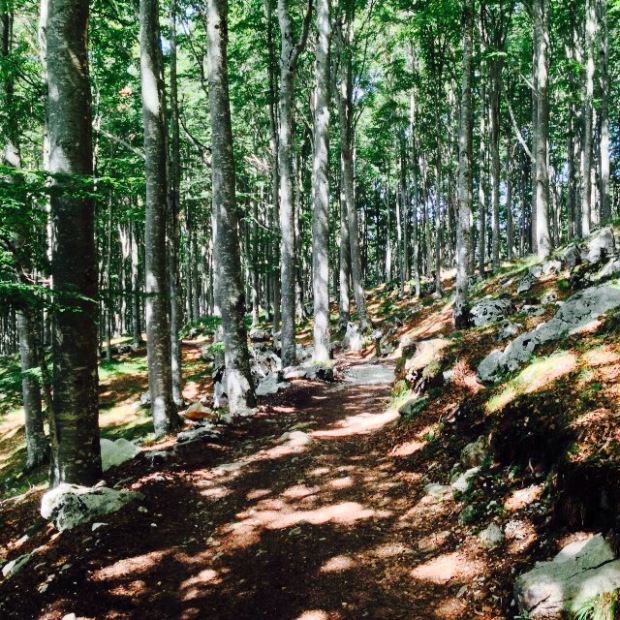 Tonight at our lakeside camp we feel love and light a candle for the Brennan brothers.