Our sunny Sunday morning in the unsung village of Maglione was spent discovering why it was known as a City of Art. In the mid 80’s Maurizio Corgnati had the idea to create an outdoor gallery of contemporary art here and there are now around 170 works mounted or created on the walls of the buildings and sculpture dotted around between. Some have faded and flaked over the years but that was part of the plan. For the art to grow and die back with the fabric of the place.

Anyway it was a nice walk with different scenery to the forests and mountains of our usual backdrop. 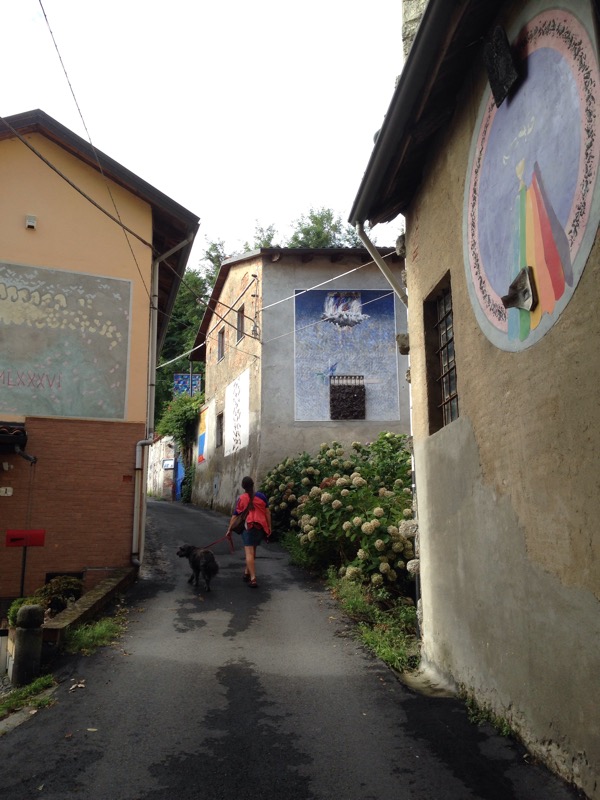 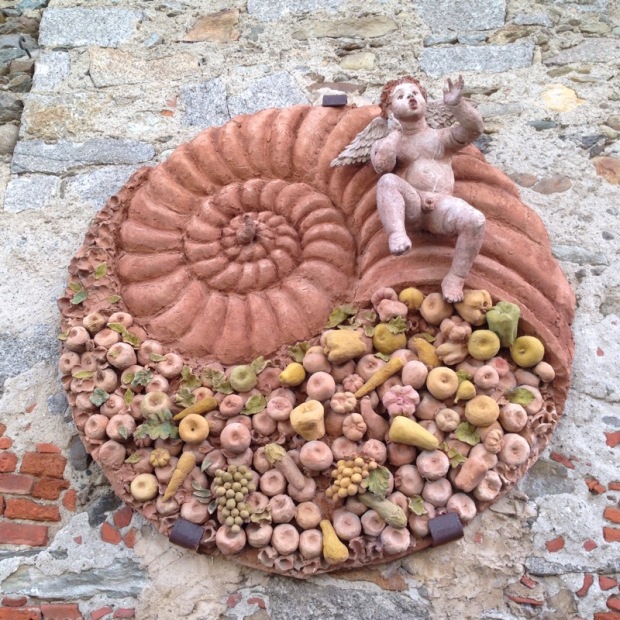 We wandered up to a viewpoint by the church and looked out over the geological marvel of the Moraine Amphitheater of Ivrea but were more interested in the vast and stylish family vaults in the cemetery.

Before we left I realised that the strange structure next to our parkup was a work by the landscape artist Nils-Udo of whom I’m a fan. This piece, a raised circular grotto like earthwork, has gone wild. 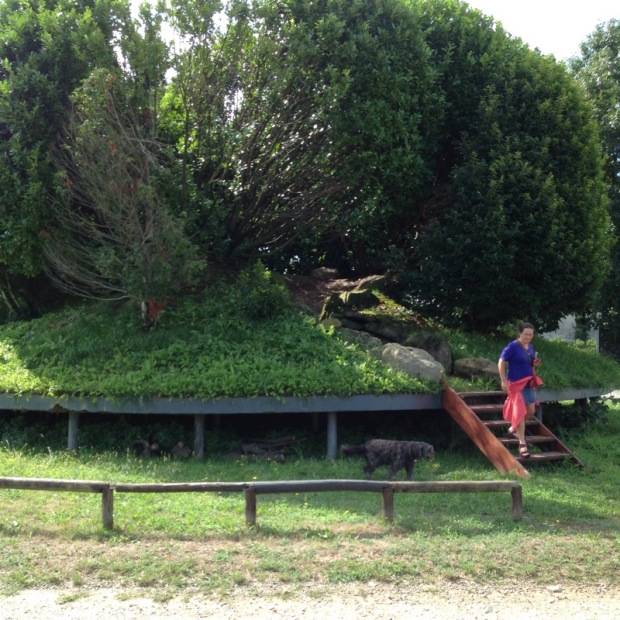 I also managed to find a touring bicycle to photograph as requested.

We programmed Serena to take us to another parkup listed in the guide, far up in the Susa valley en route en France. It’s like a magical mystery tour letting the guide and the GPS decide destination and directions. It’s an exercise in letting go of control and surrendering to a higher power. Fate. And it usually works out grand. If it doesn’t it teaches you acceptance.

The valley extends from Torino or Turin of sacred shroud fame all the way up to the passes over the mountains and nowadays the tunnels through them from Bardonecchia into France. Since the Middle Ages there have been numerous abbeys and monasteries of Franciscans, Augustinians and Benedictines and its on a Camino to Santiago de Compostella and the Via Francigena pilgrimage from Canterbury to Rome. I was tempted to get the staff out.

Our camp was a nice small scale community run affair above Villar Focchiardo and below the forested mountains of the Parco Naturale Orsiera Rocciavre where they charged us a fiver. Fair enough. 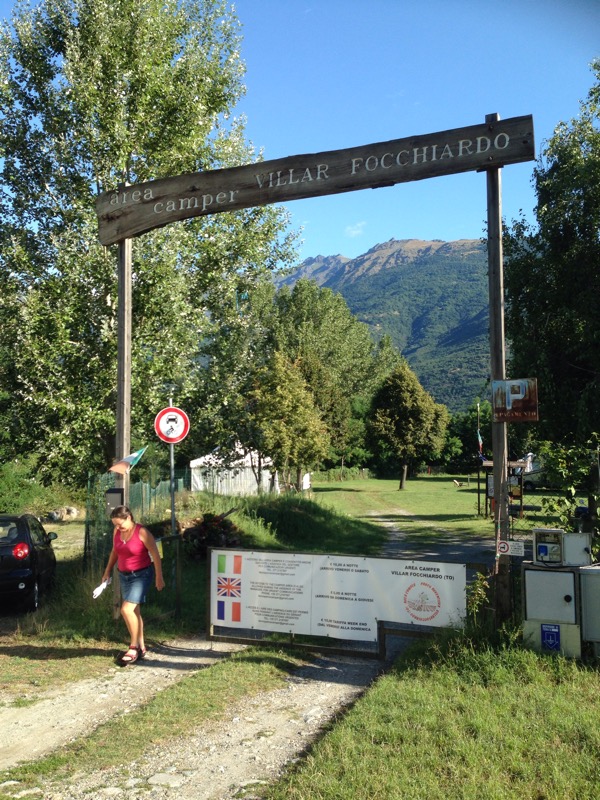 The village had views down the valley over the fine stone roofs.

And across the chestnut forests the region is famous for. 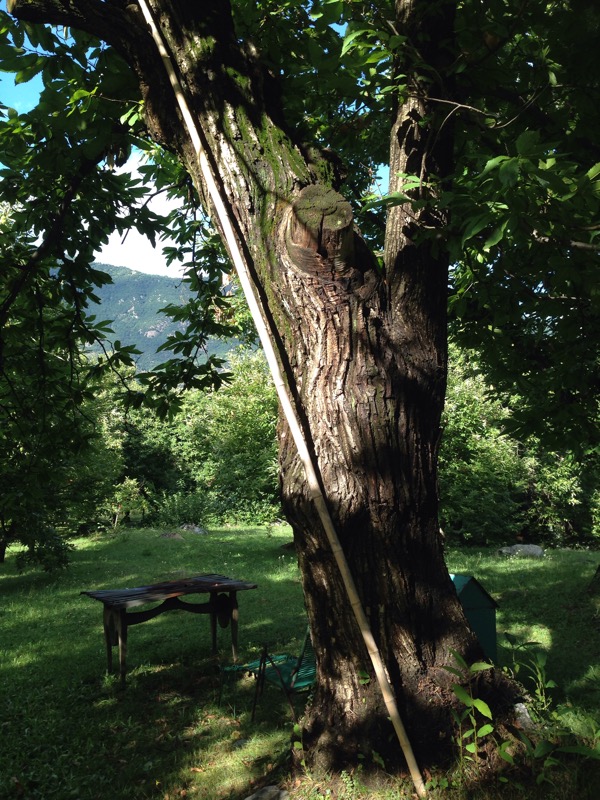 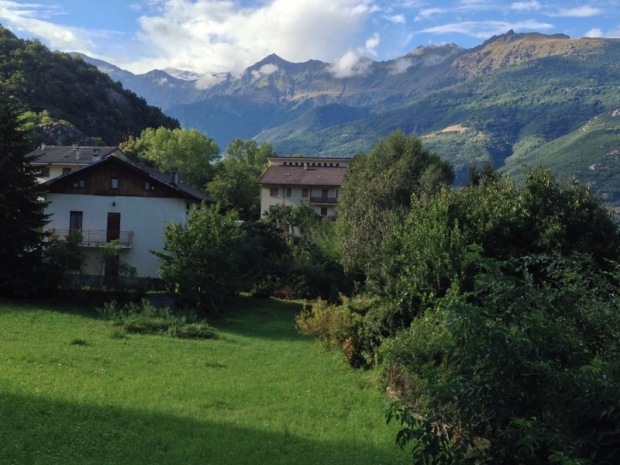 But the thrills came later in the afternoon when a sudden loud crumbling crashing rumble and cloud of dusty smoke had everyone out rubbernecking the landslide on the cliffs above us.

Before long the civil defence and fire brigade were out and the church bell was ringing the news but after some barriers were erected and some no go tape strung around it was deemed “all clear” and there was no evacuation.

The next day we hoped the mountains would hold together as we drove through numerous tunnels finally joining a long queue to enter the big one. 12 km of the Tunel do Frejus to France. A mighty piece of engineering that we had to cover the cost of. We reckoned it would be a tenner and handed one over. Yer mans waiting for more. We see the electronic price display flashing before our eyes. € 58.50.  Short and curlies.

Arriving into France and only saved a customs going over by the more interesting car from Bosnia Herzegovina that came after us, we drove to a lakeside parkup at le Bourget du Lac to lick our wounds, plan our next move and have a swim.