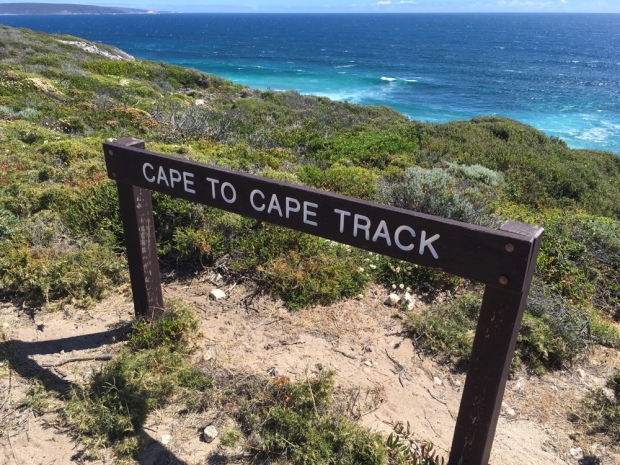 We decided to continue our World Series hiking exploits with this one whilst visiting sonny Milo in Perth.

After a weeks gardening to recover from the Kumano Kodo it was back to rucksack packing again. But this time we were going to have to carry 2 person tent, sleeping bags, sleeping mats, food, cooking and eating stuff and more water. It all adds up and our bulging bags were heavy. On a previous trip down under we’d done a couple of hundred Km of the Bibbulman through the gum, jarrah and karri forests of the Darling range so kinda knew what to expect of a hike in the Ozzy summer but this one didn’t have the camp shelters every 20 km or so but did have a few commercial camp sites and a some small towns to pick up supplies on route. There were also some simple camping sites with a picnic table and compost toilet with a water tank that may or may not have anything in it. Reading about it it became obvious that the challenging aspect was not so much the distance but how much of it was on loose soft sand beaches and tracks. Well we’d had a weeks training in those conditions on the Fisherman’s Trail in Portugal in the summer so felt like we could manage. A bit of complex logistics saw me and Sally set of from the Cape Naturaliste while Milo drove halfway down the trail, to Prevelly, left the vehicle there and cycled back north to our camp for the night at Yallingup, 16.5 km from our starting point.

Hiking north to south, with the sun behind us ( southern hemisphere innit) we set off from the historic lighthouse on a wheelchair friendly access for all track for a few km until things started to get wild. 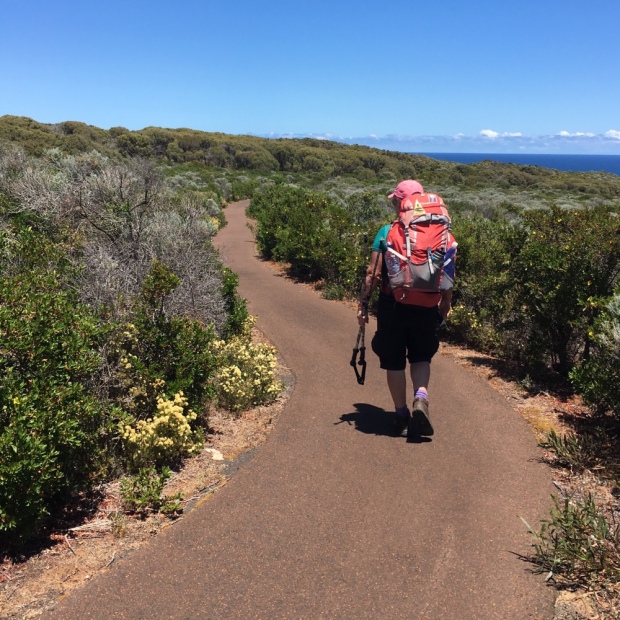 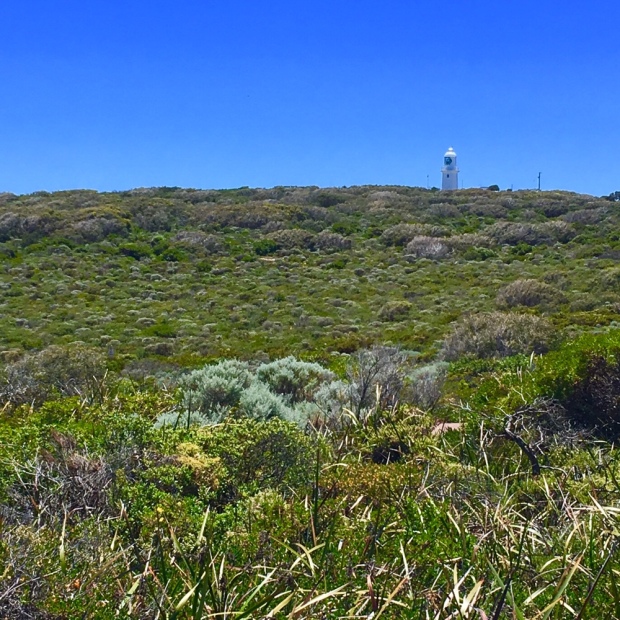 Although spring was on its last legs and the dry heat of summer was coming in fast there were still a lovely selection of wild flowers in bloom. 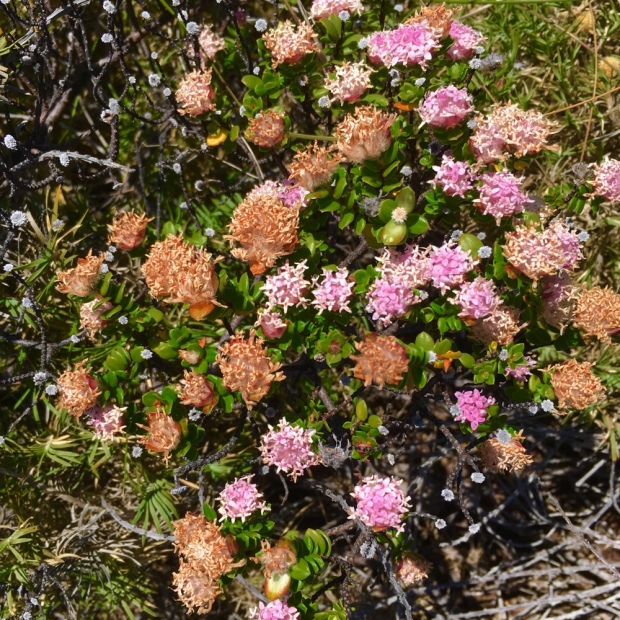 The bush was thickly vegetated with an impenetrable wall of greenery either side of our mostly narrow pathway that undulated along the coastline with views of the blue waters and white surf. Dropping down to the beach we got our first taste of soft sand hiking then back up to the eroded limestone cliff tops and sandy 4 wheel drive tracks. 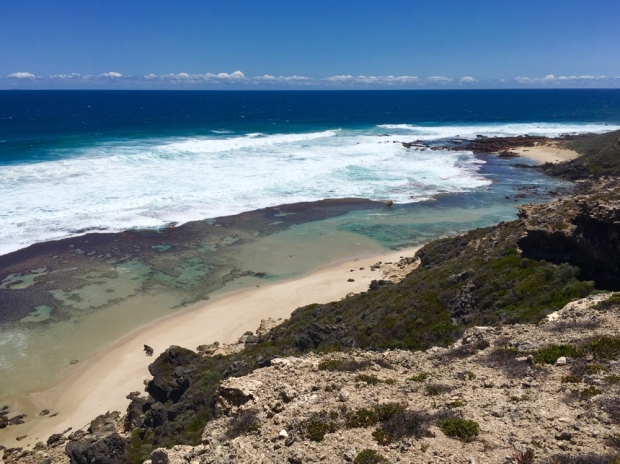 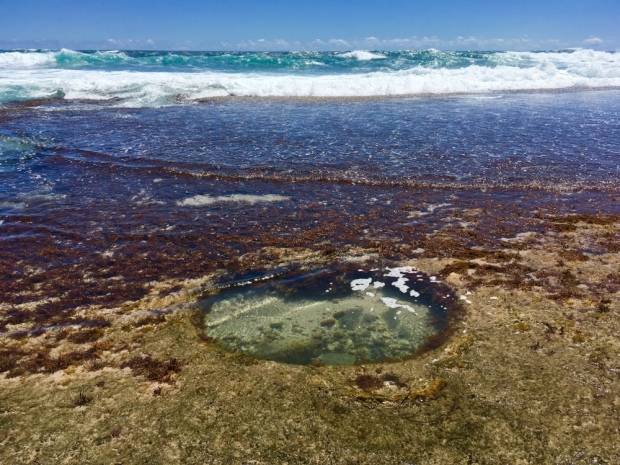 Deep in the bush we past the simple Duckworth Camp, cos we were heading on another 4 or 5 km to shorten the following day. Arriving hot and weary in Yallingup we swam in the sheltered lagoon before meeting Milo and returning to our camp through the gardens of Caves Hotel.

Up and on the trail by 7 with the sun already climbing steadily it was another fine day for the many surfers along this coast. There are quiet a few 4 wheel drive tracks that give them access to amazing beaches and breaks and we stopped for me to have a swim at one where a pod of dolphins rode the waves next to the surfers. 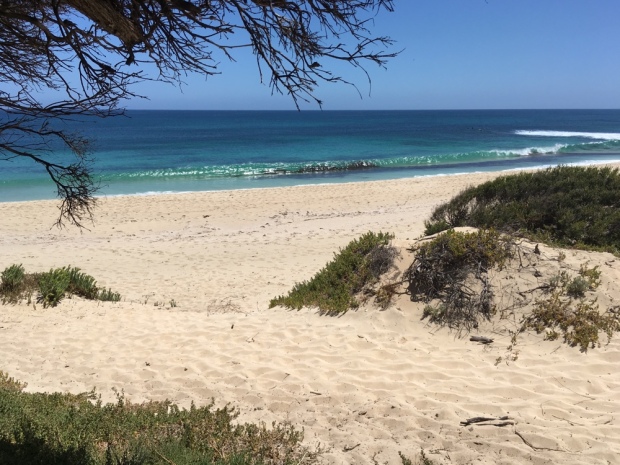 We crossed a couple of brooks that managed to make it all the way to the sea and I climbed up to the Quinninup waterfall accompanied by croaking frogs and flitting birds. We had seen and heard a lot of birdlife and now saw our first lizards and a quenda at the Moses Rock camp where we stayed, after a 22km hike, sheltered in amongst the tea trees. 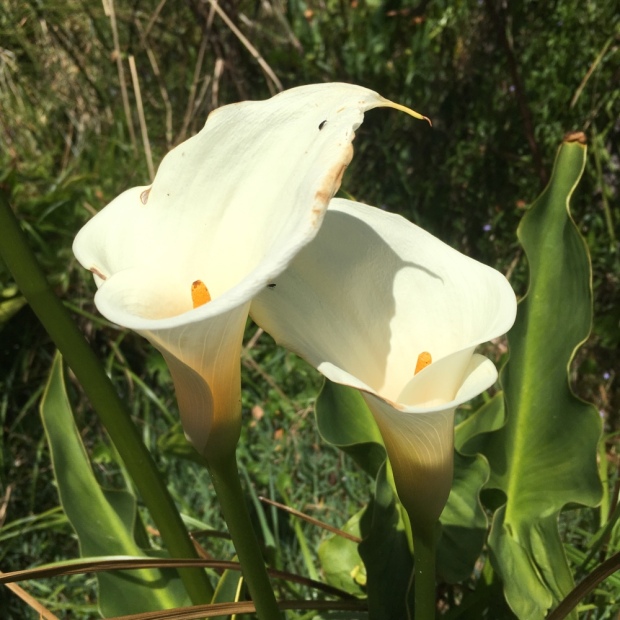 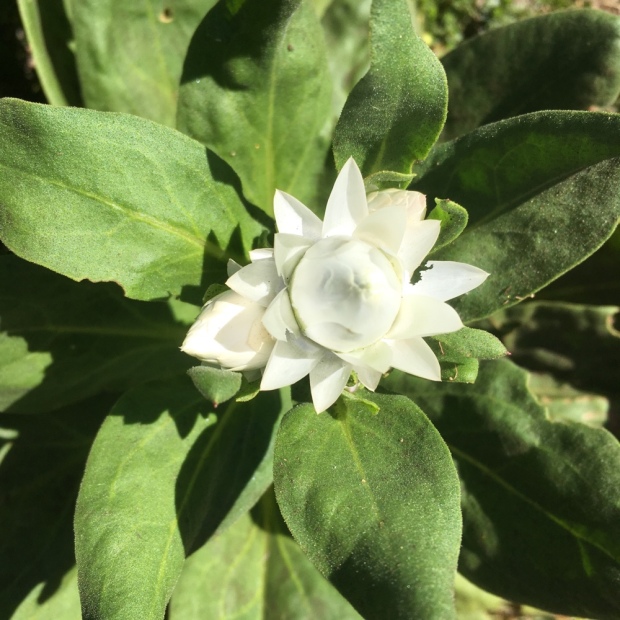 Next day was nice and cool to start as we continued along the coast through a mixture of thick bush, rocky escarpments and white squeaky beaches. There had been a number of lookouts and scenically placed benches for whale watching as this is directly on a major migratory route and also for surfers to watch the waves and each other. For us they were a welcome opportunity to rest awhile and gaze out at the deep blue beyond. There were also keen fisherman both on the land and in the water with spearguns. The plant growth testified to the relentless wind as they crawled over rocks and were aerodynamically shaped by the forces. 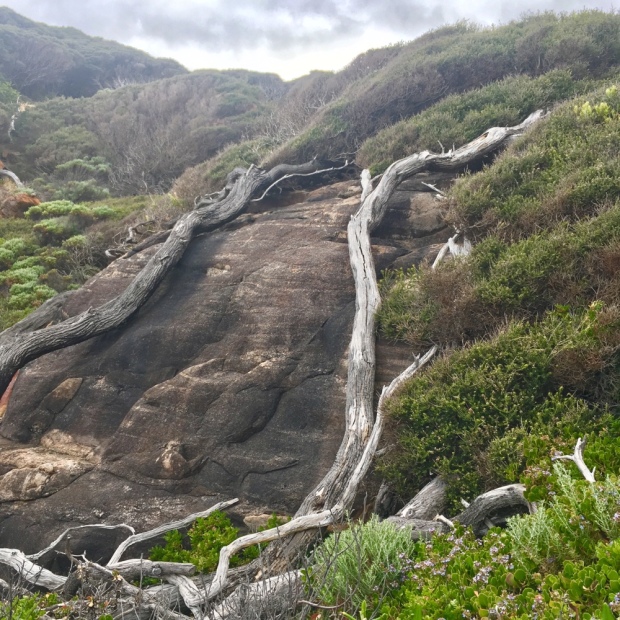 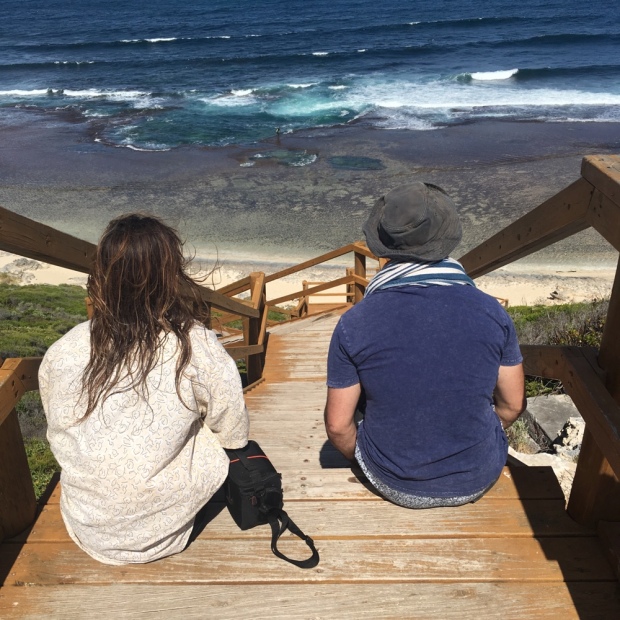 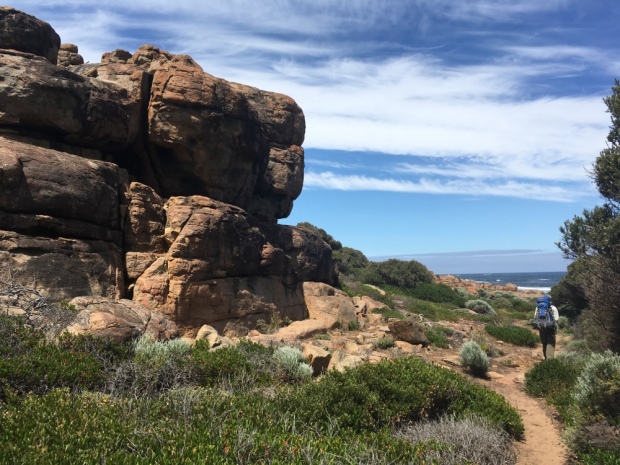 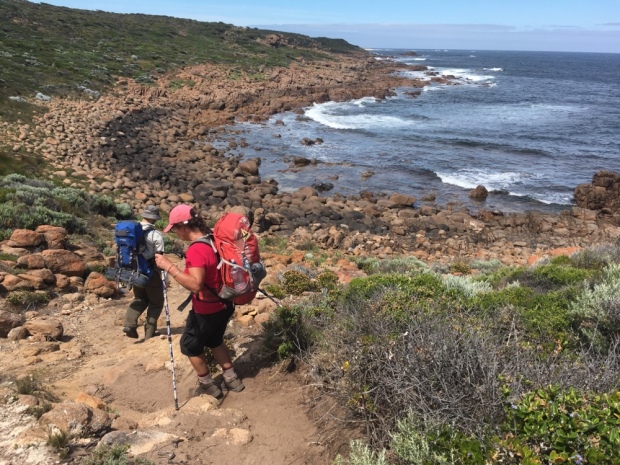 We came to a shark warning speaker and entered a long section of coastline where these were placed in popular surf/ swim areas.

And wouldn’t you know it, when we got to a lovely bay at Gracetown in the midday heat and got in the inviting azure waters to cool off the siren overlooking the beach started flashing red lights and a disembodied voice said the beach was closed, leave the water, sharks were in the area. There are helicopter spotters and also baited drum lines. There have been a number of attacks around here. 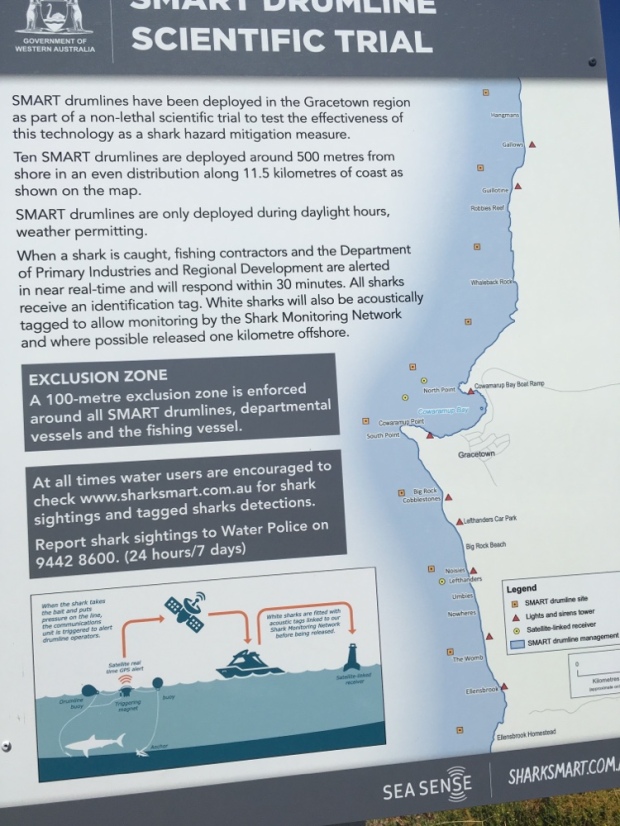 But after another couple of hours of hiking in the heat we were forced back in the water to cool off on a reef protected beach before turning in land and passing an old homestead now under National Trust management, and into the forest for a change where a quiet and secluded camp awaited. Another 20 km done and time to pour some boiling water on a dehydrated meal before turning in for a fitful night on my leaking and comfort free sleeping mat. 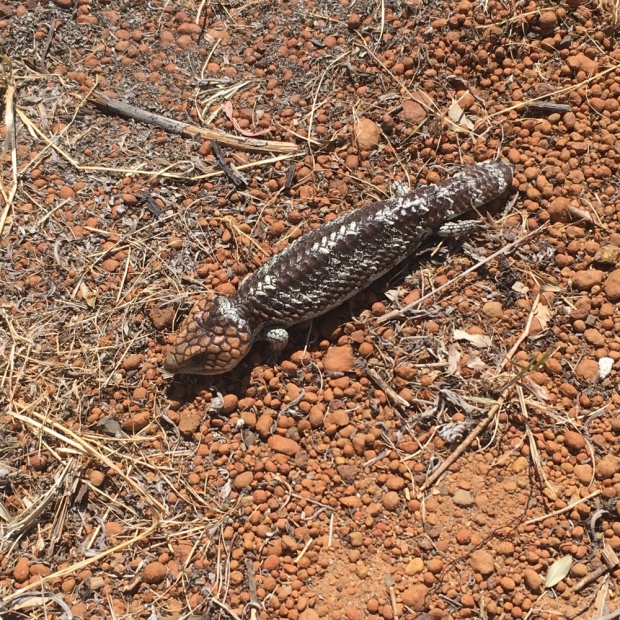 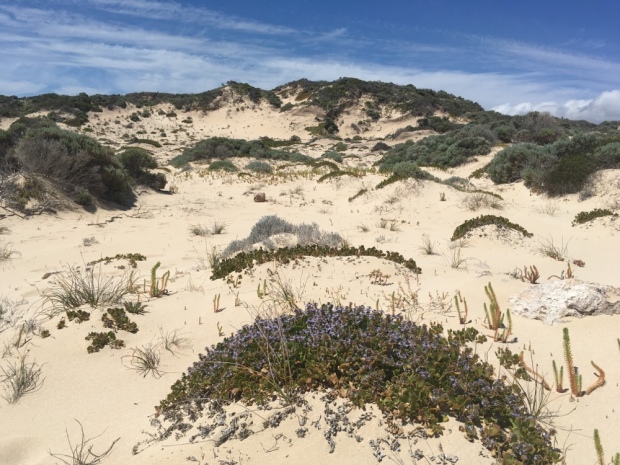 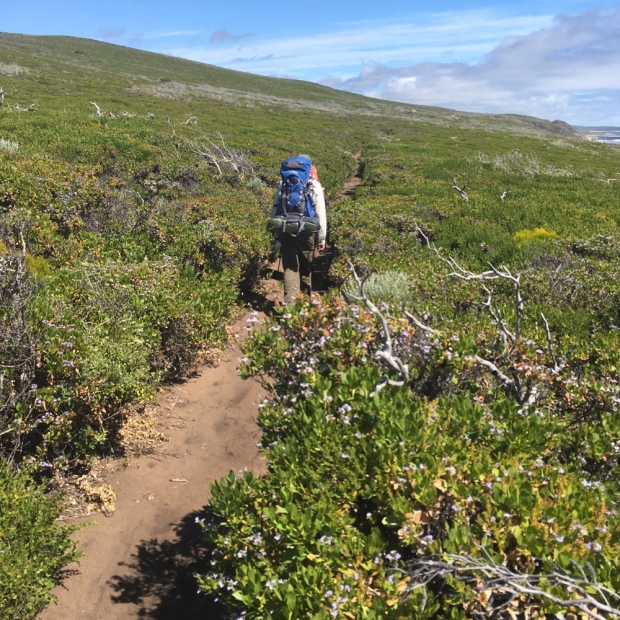 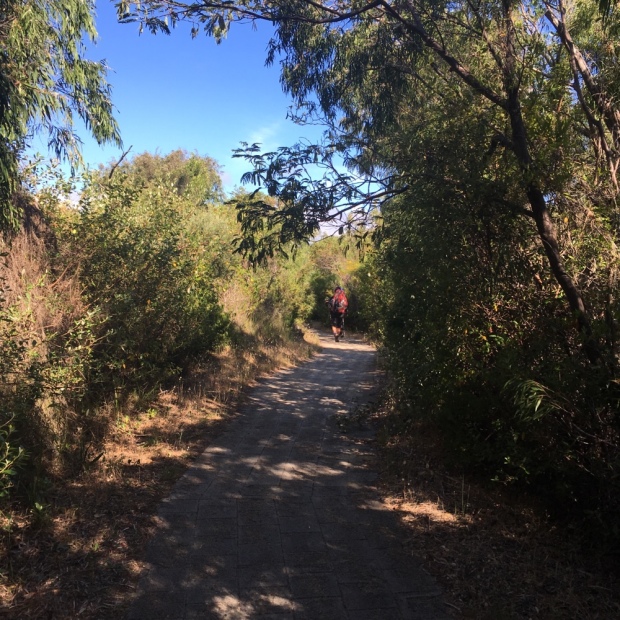 Up and about in the forest early again on a sandy track that narrowed as it reentered coastal scrub. We disturbed some Roos near a place with bizarre rock formations jutting above the greenery. 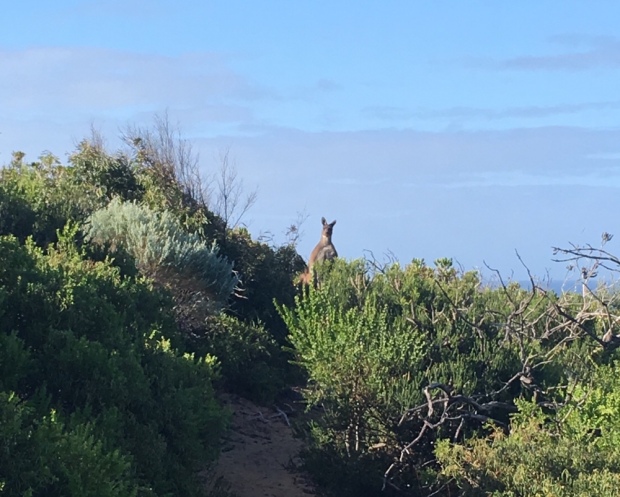 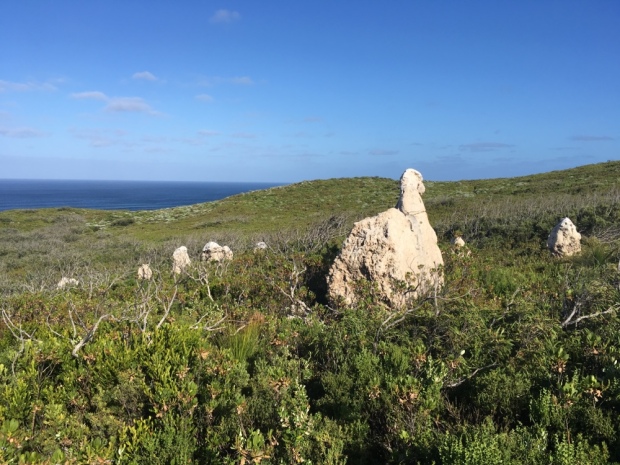 It was beautiful walking and varied with narrow paths through the scrub, wide 4 wheel drive tracks, rocky cliff tops and sandy beaches walking next to lapping waves of a calmer morning sea. Before too long we had reached the Margaret River a famous stretch of fresh water that now , in the summer, had a sandbar preventing its emergence into the sea. A lovely spot to swim- without the boisterous waves and salt.

So after only 12.5 km we had reached Prevelly where we had to say goodbye to Milo ( after offloading any weight we thought we could do without) and book into a campsite where we had a caravan and a bed with a soft mattress. Oh delights. The campsite also had a restaurant a grocery and an off license. About 70km done in 4 days. Now we have to do the same again in 3 days with about 16km of soft sand involved. Fortified with food, beer and wine I’m feeling optimistic. 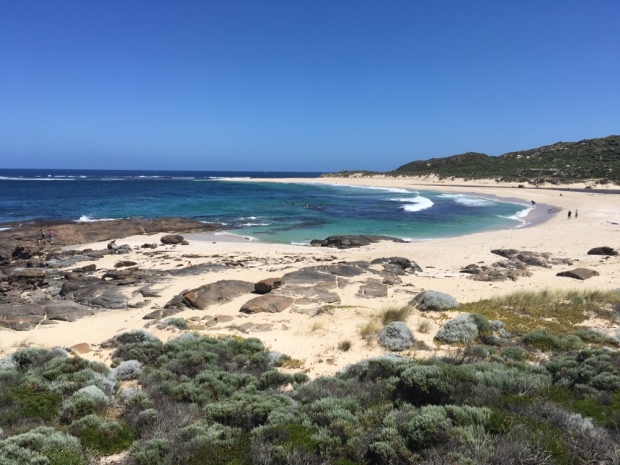