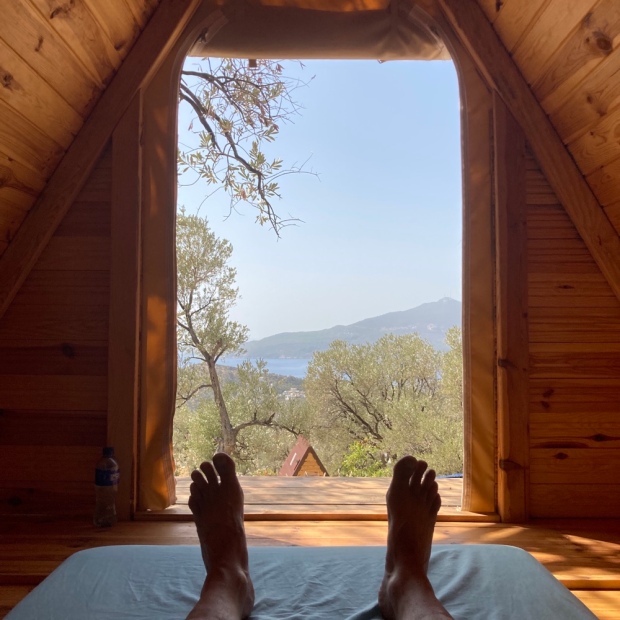 So 4 days trekking since last post and I’m hiding from the sun in a tiny wooden A frame at the foot of the 900m mountain we now have to climb. An emerging camp site being put together by a young guy from Macedonia. All off grid, a dozen or so little “bungalows” set in an olive grove that the Way winds through. It’s called the Olive Garden Camp if you’re ever over this way. It’s just after the busy, mostly British, resort town of Kalkan which we got through as quick as possible. Picked up a new cap for me as some bush grabbed the last from my pack this morning, and supplies and cash for Ivor, and got the hell out of Dodge. We’re hoping that a dawn start from here will have us up the mountain before the sun boils our blood.

We’ve seen a lot of outstanding ruins since Pydnai, the first of which were at the World Heritage site of Xanthos.

We’d taken a dolmus bus from Patara Green Park to avoid 5km of road through plastic greenhouses and wandered around the 2500yr old city after walking through the covered market below, which could have supplied some wonderful and cheap gardening tools. Too heavy to carry another 400km! 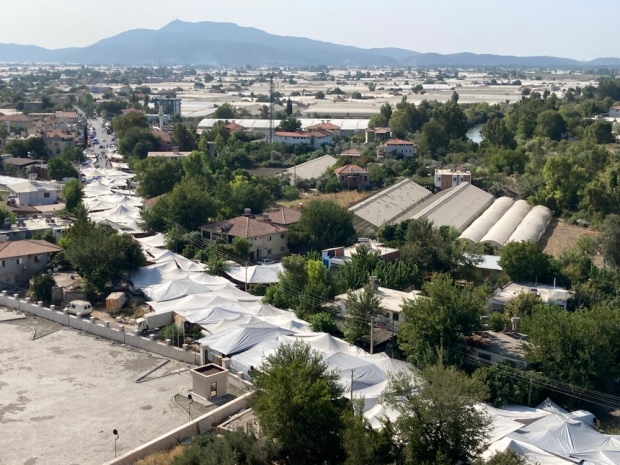 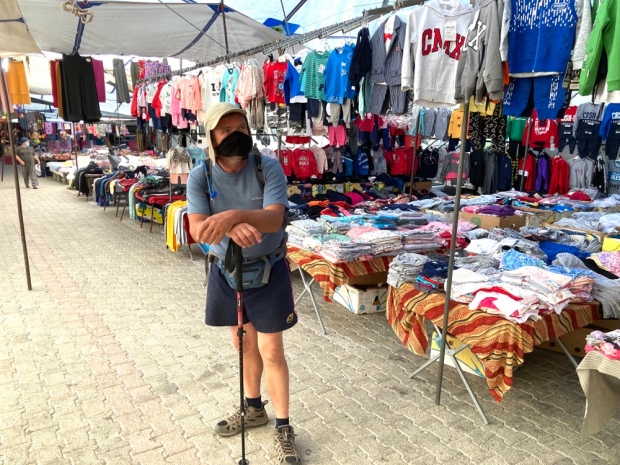 There were many signs illustrating the wonderful monuments that had been ” smuggled”, ” abducted” and ” removed to ” the British Museum by Charles Fellows who ” discovered”!! Xanthos in 1840. Ahh the arrogance of the robbing Empire. 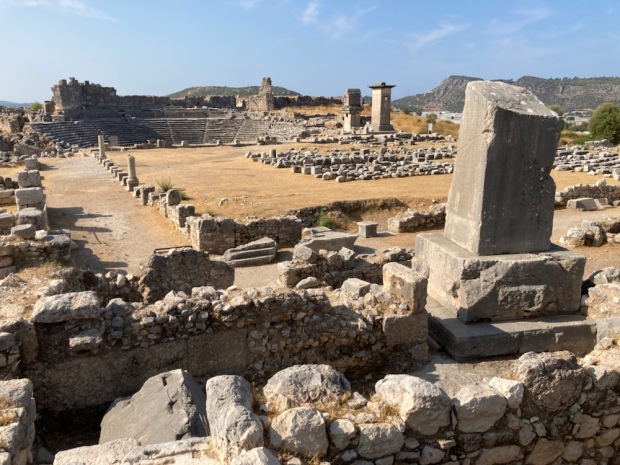 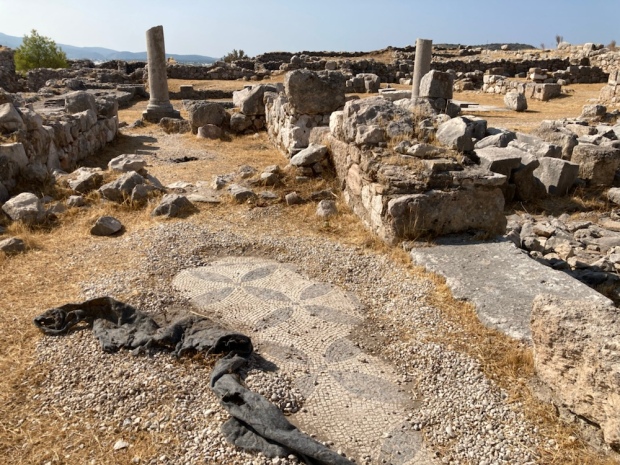 More ancient wonders were literally on route later when we hiked on from Cavdir to Uzumlu and found ourselves walking an amazing aqueduct which, two millennia ago, carried water from the hills all the way to Xanthos.

Further on we discovered (that’s the Empire spirit talking!) a section that was still working, carrying a gushing flow of deliciously cool water down towards the sea of greenhouses past a delightfully chilled “kosk”or sitting platform. 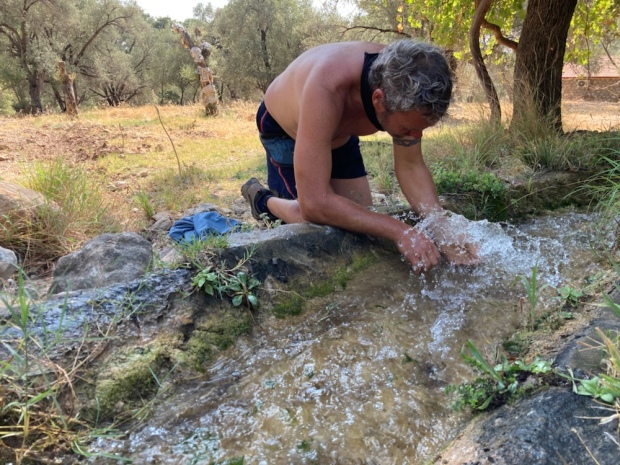 From there we had to walk upstream through thick jungly vegetation passed a waterfall- not what we’d expected in this dry landscape. 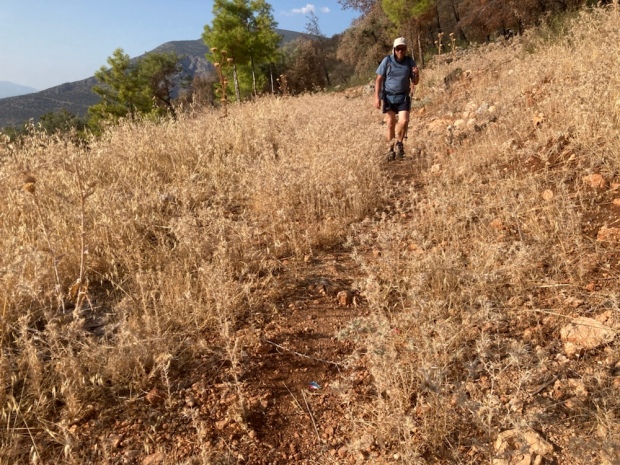 Deborah and Ramazan treated us right royal and sent us off stuffed with a ” full turkish” in the morning to pass a wealth of fruit on route until we were past the villas and out in the scrub again. 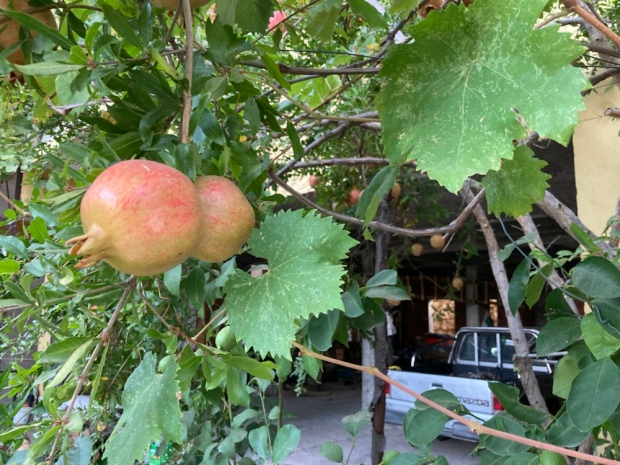 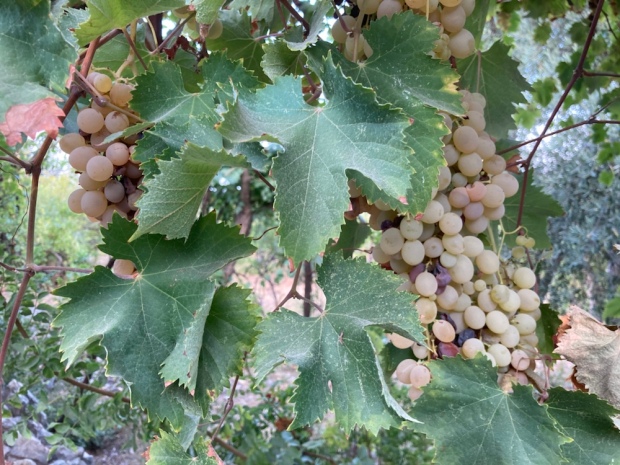 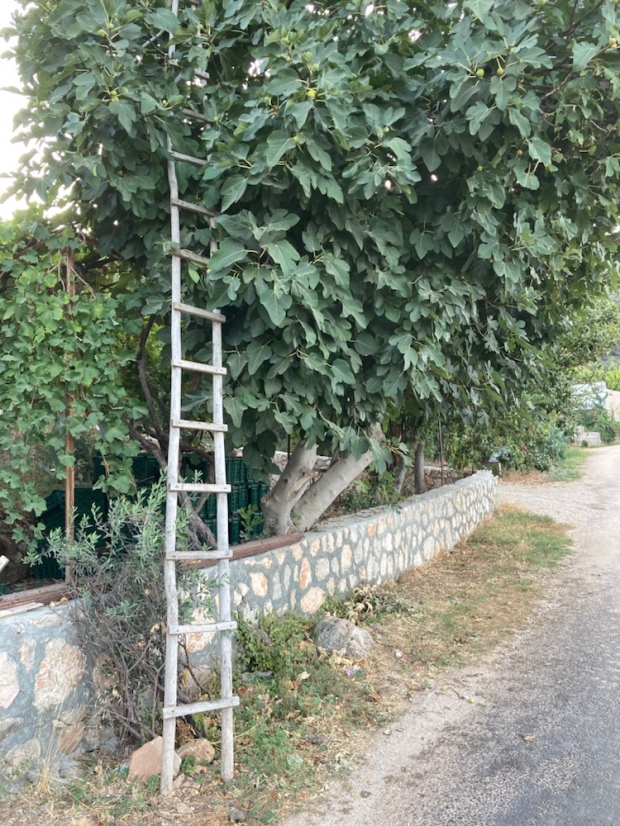 At Amber we passed a jolly man squashing grapes and doing a fine impression of a drunken grape squasher. His wife gave us a drink of his foot juice. Lovely.

Next up Akbel provided us with a seamstress(?) for fixing Ivor’s chest strap on his pack. No money accepted. 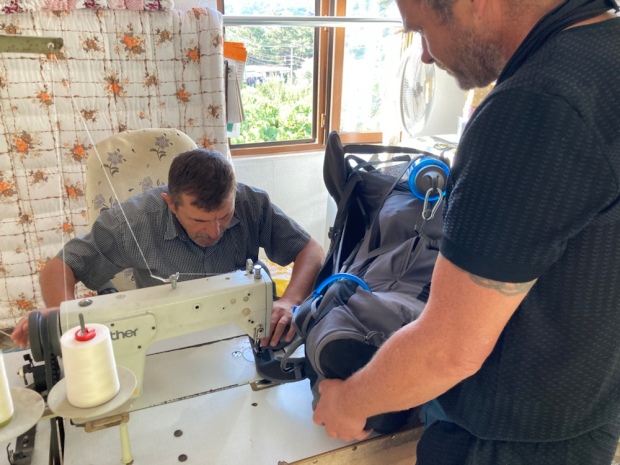 We should have put money into the local organic veg suppliers but can’t take the weight. 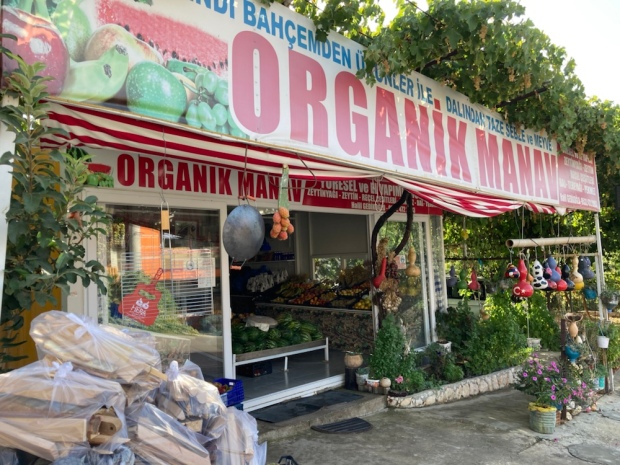 Soon we were on a very inhospitable section. Not the people but the vegetation. Very sharp, very prickly, very dry, very overgrown.

We had been warned to wear long shirts/trousers but “it’s too darned hot”.

More antiquities in the middle of it all in the form of a 2000 year old Roman water engineering marvel of Delikkemer. The sealed siphonic pipes ran atop a 500m long wall, 1.6m wide and up to 12m high. Each of the 1000 pipe blocks weighs 800kg and the wall blocks are massive. The mind boggled.

On through the dried grasses of autumn to take shade and lunch at a water source we shared with a community of frogs and I think it’s where Ivor saw a tortoise in the bushes. 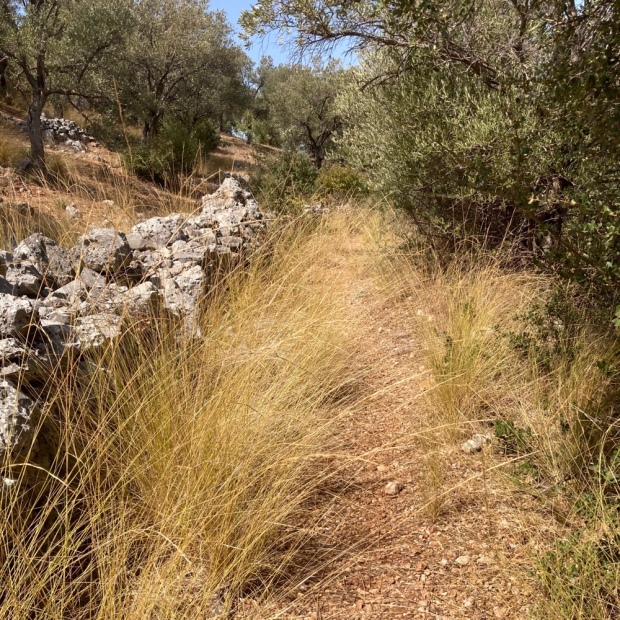 Whenever we are heading to a sea level stage end the route planners seem to delight in sending us up first. And so it was. On route to the village of Gelemiş we had to climb, getting temporally lost but finding more beehives.

A busy town with multiple sleeping options we chose to camp behind Medusa bar. A funky operation with showers and beer.

The red/ white markers led us astray first thing and we had to retrace our path back through the town. There is quite often a difference of opinion between map, markings and apps. Some markings have been painted by wily pension owners to lead you to their business. Allegedly.

But we made it down the road to the ancient city of Patara. Now inland from the 12km beach it used to be a harbour city and has seen a succession of people’s and cultures. And most importantly was the birthplace, in the 6th century, of one St Nicholas, AKA Father Christmas, although how he could handle the heat in that red outfit is beyond me. 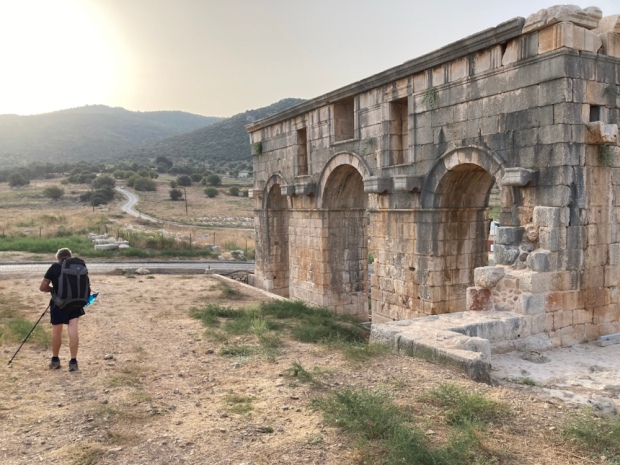 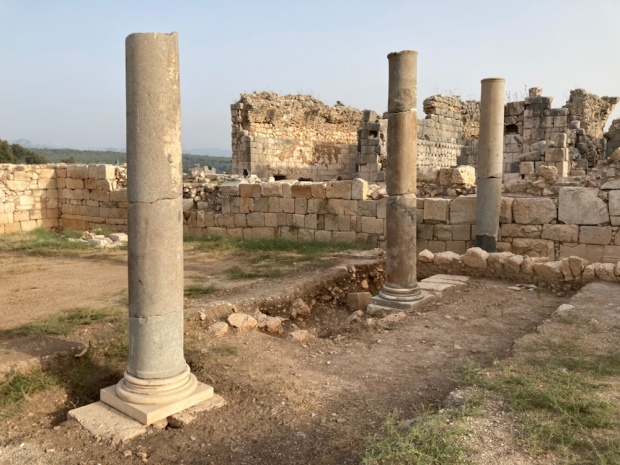 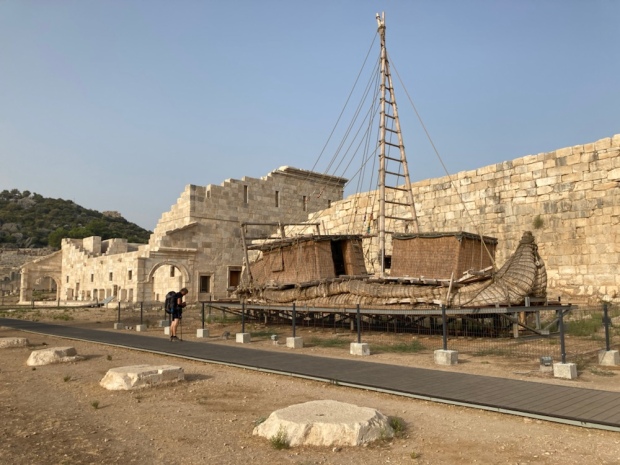 What impressed me the most was the harbour bath house, a huge edifies that once housed a gym, sauna , solarium etc etc with cool, warm and hot rooms and swimming pool and underfloor heating and massive hot water storage tanks. 2000 years ago. Hats off to the Romans.

Culturally sated we went to the beach where many turtles lay their eggs. I saw a multitude of little scuffling tracks and little holes so I guess it’s laying time, not hatching time.

From there we had to traverse the peninsular to the south and back around to Delikkemer and then a “dangerous” and scary keg on to Kalkan. We thought we’d best break the stage and leave the scary stuff for a day so after a hot hike up and over Eren T mountain/ hill we descended to a lush and isolated beach to cool in the now placid waters.

Onward down the track passed other tiny bays people had claimed as their chill zones we made it to the water fountains and popular picnic/ swimming spot for local Turks. Exhausted and needing to be near drinkable water we decided to stay. 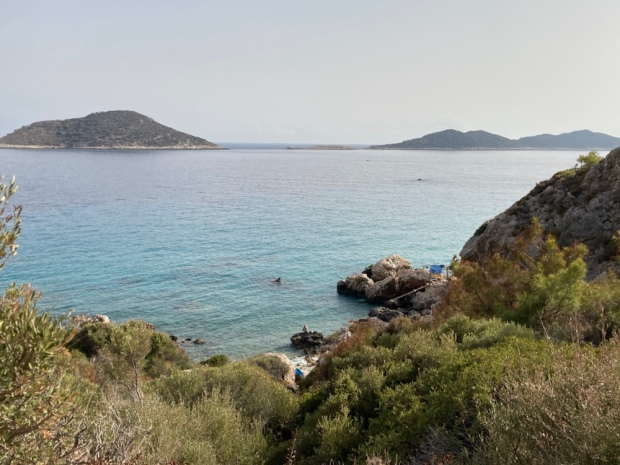 In the morning the twinkling lights of Kalkan drew us on from the camp. Back to the aqueduct then down a pretty crazy path up and down jagged rocks with 100m falls to the sea if you made a tiny error. Slow going but eventually we emerged into the opulent villa land on outskirts of Kalkan. From there a sweaty slog into town and a dolmus a few km down the highway from where we clambered through the olive groves to our tiny A frames. 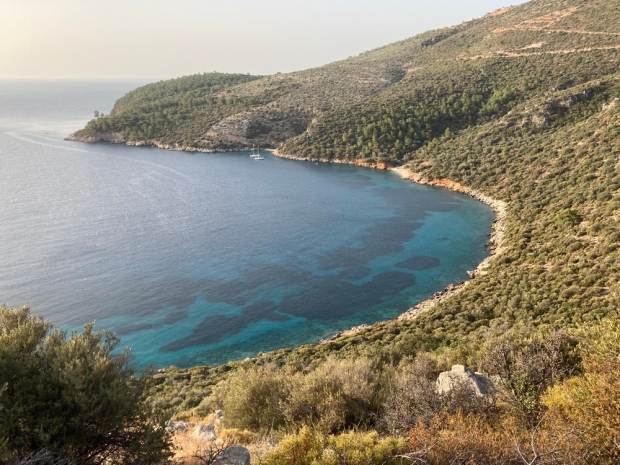 4 more days and we’ll be back at the sea. Until then I’m hoping for some cool mountain air.