I think I’m getting my mojo back. After a relatively easy couple of days and good sleeps In Soft beds and square meals containing fresh veg I think my energy is coming back. It hasn’t really been tested because I’ve been pack free but I was actually running down the trail at times today and generally had a spring in my step again.
And I’m looking forward to getting going in a straight line again so to speak without the stopping and starting. I find it’s too disjointed and doesn’t have the sense of progress and journeying that starting at the beginning and keeping on till the end does. But it was very nice to loose the monkey off my back for a couple of days. I keep thinking that maybe I should ditch the tent but you can be sure the day I do I’ll rain and I’ll be in the middle of nowhere.
So I got the bus up to the Parador in the Parque National Del Teide this morning where there was a cafe, tourist info, hotel ,restaurant, coach and car parks not far from more car and coach parks for the cable car to take you to the top of mt Teide, or nearly.
I tried to explore the Roques de Garcia, plugs of sand coloured rocks standing sentinel at the base of Teide but the crowds were too great and I retreated back into the interior, out of reach of motorised transport. 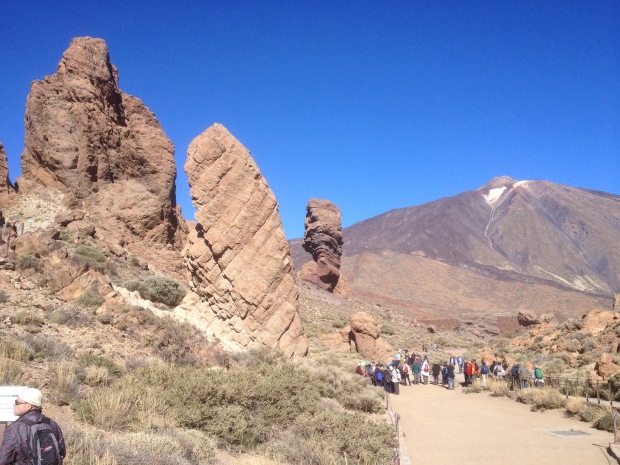 First a few hundred mt climb up and around the back of Montana Guajara, the birth place of high mountain observatories after Piazzi Smyth, Royal Astronomer of Scotland, mounted an expedition to set up his 1.88m telescope on the summit to prove the advantages of altitude and clean atmosphere for astronomy. After his trip he named some lunar mountains he discovered ” El Teide ” and ” Tenerife ”
His expedition and following ones used the path I’m following ” Camino de Chasna” which I discovered had been used since before the arrival of the Europeans to link the North and South of the island. The Guanches used it to reach their communal pastures in Las Canadas and for centuries,before roads , it was the lifeline for the movement of people,livestock and goods of all kinds.
When I had climbed my way to the pass overlooking the south side of the island I was presented with a fluffy white thick blanket of cloud from left to right and to the horizon a long long way below me.
Before long I had reached the high point of my travels on Tenerife at the Degollada de Guajara at 2373mt and the luxury of downhill trekking began.
A rough and rocky path led me down to a vast area of black volcanic ash with my Camino marked out in stones.
Half way across the ash I met a young French man who asked me the way to “the summit”.
He was planning to spend the night star gazing so I told him of the astronomical history of Guajara and wished him well.
Not too long after, as I began to leave the ash and enter pine forest I stopped to watch a man staggering up a steep pathless slope from the trees towards me. An older Italian man he also wanted to now where he was and where was the Pueblo. I had to tell him there wasn’t one but sweetened the bad news by telling him the glorious history of astronomical research carried out on the mountain above by one of his countrymen. As we had no language in common it was understandable he was more impressed when I gave him my water as he had very little.
The track started to level and I couldn’t resist picking up speed until I was running down through the soft ash towards the all enveloping cloud ahead.
However this wasn’t the cold wet windy cloud of LA PALMA but cool and soft mist which was actually a bit of a relief after the intense glare of the high altitude sun.
And so down and down through the pines until I , suddenly, was back in Vilaflor.
Tomorrow it’s back to the pack. 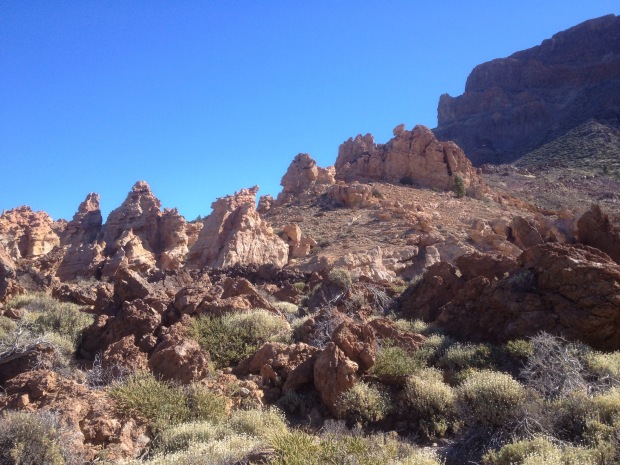 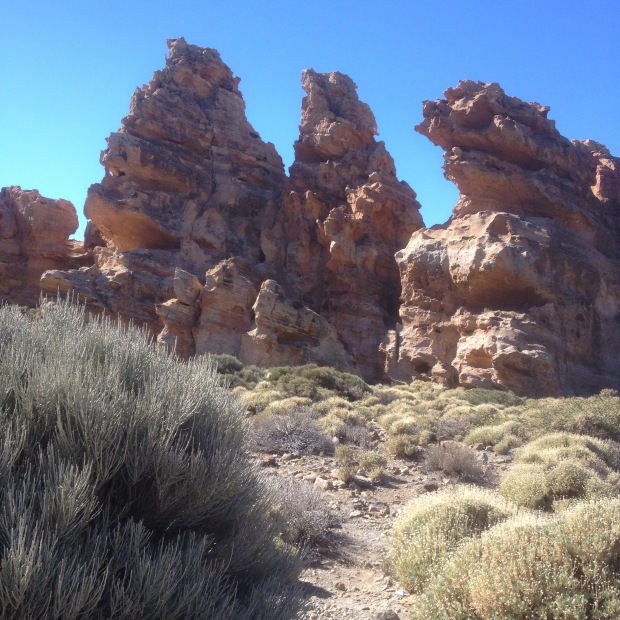 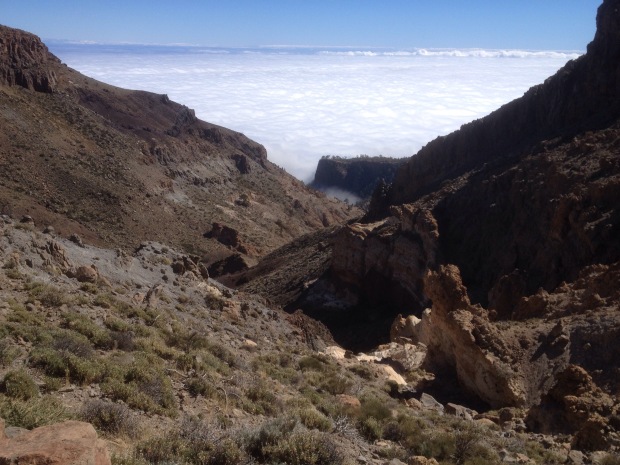 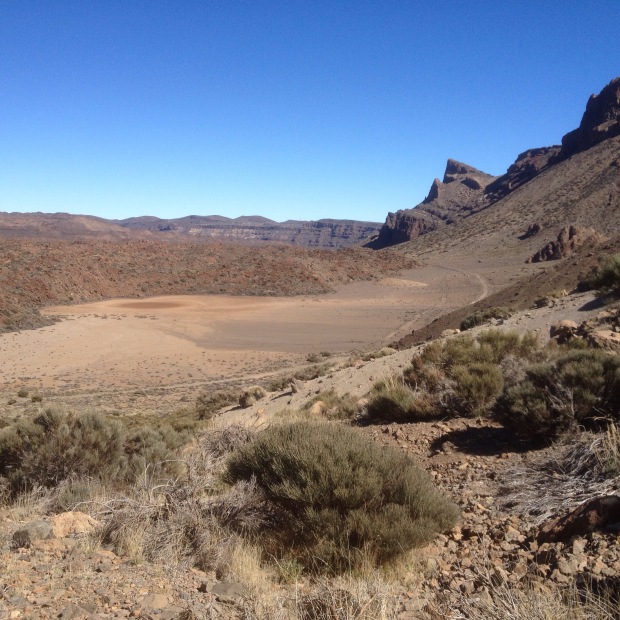 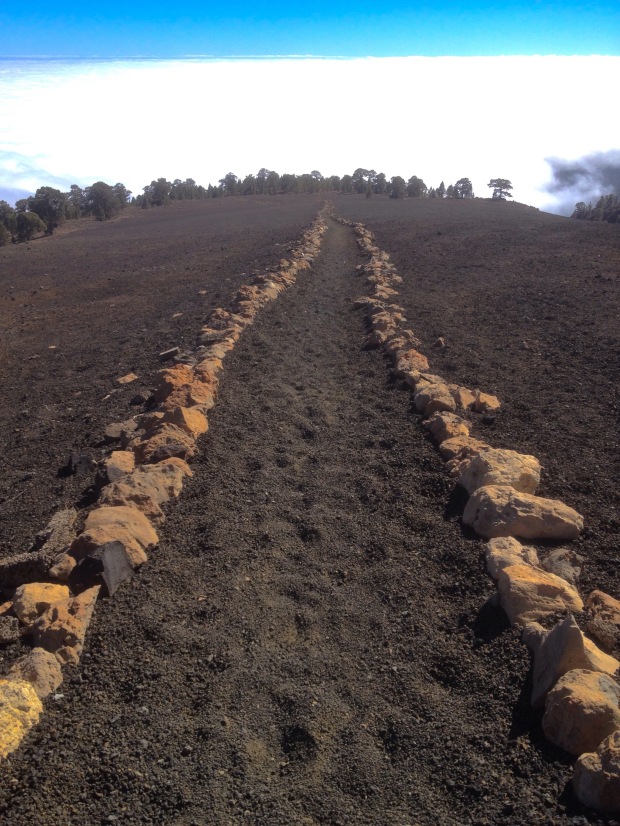 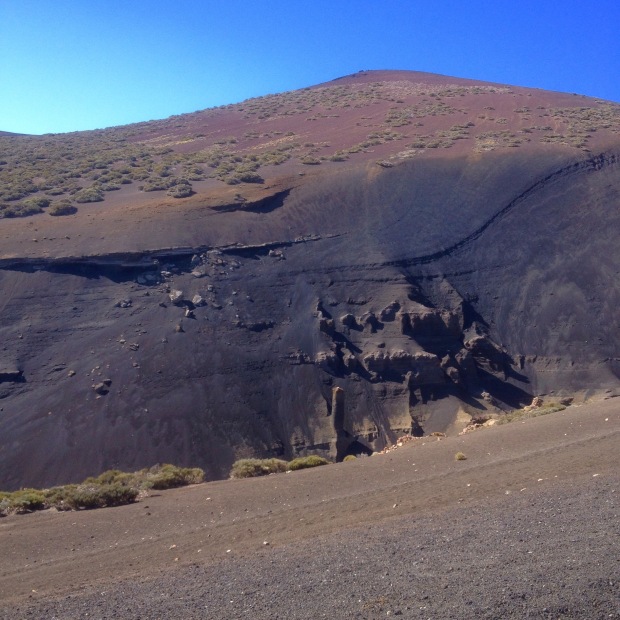 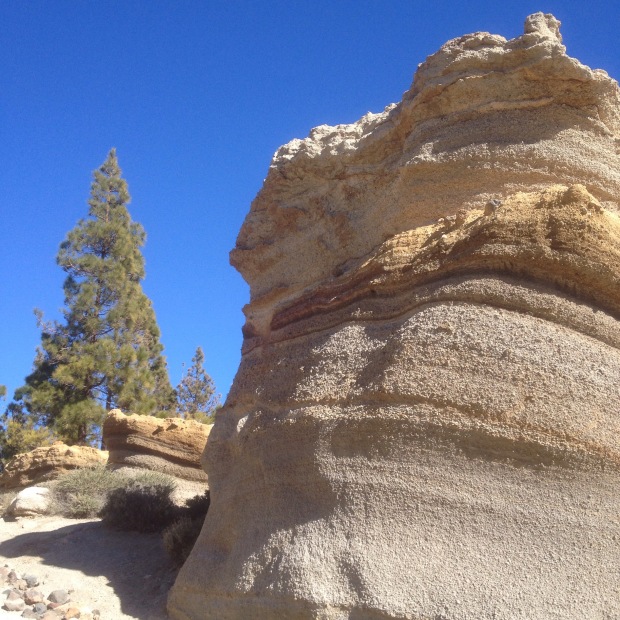 I’m sorry all the pictures are at the end. I had hoped I could write the blog with bad coverage and then insert photos in text when I move to the cold outside for good coverage. But no. And just to prove its cold here too here’s some snow. 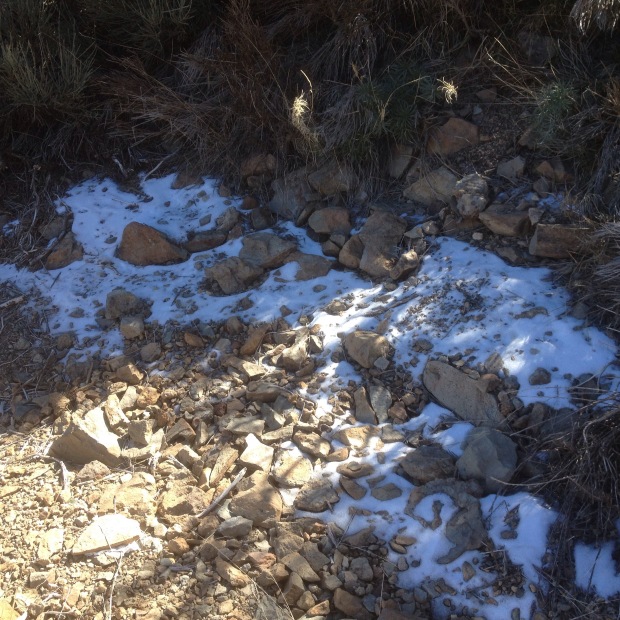