My Spanish journey is nearly over- I’ve taken roughly 1,900,000 steps so allowing for a 5% poetic license I’m calling it a two million step journey.

The last four days have been the most intense immersion in art of my life and it’s been both exhausting and life affirming. There are shows everywhere. Not just in the big three galleries but a host of other civic and private buildings display world class art. My campaign to assimilate as much of it as I could continued yesterday morning at the Thyssen Bornemisza gallery containing maybe the best private collection in the world spanning works from the 17th to 20th centuries. The first to really strike me was by a man from Clonakilty in west cork Michael Harnett who painted “Material for a leisure hour”. I think he nailed it. ﻿

I was there for many hours admiring the work of all the finest artists of the last 400 years. Here is a small sample. ﻿ 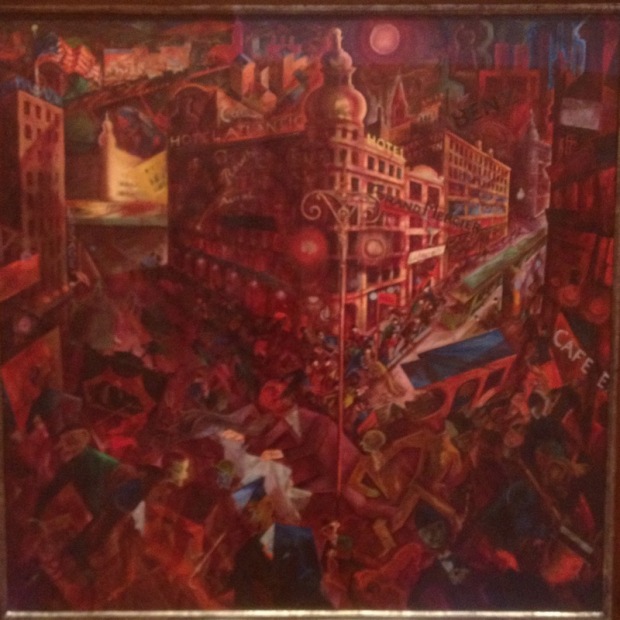 It had been raining all day so when I emerged the streets were awash. ﻿ 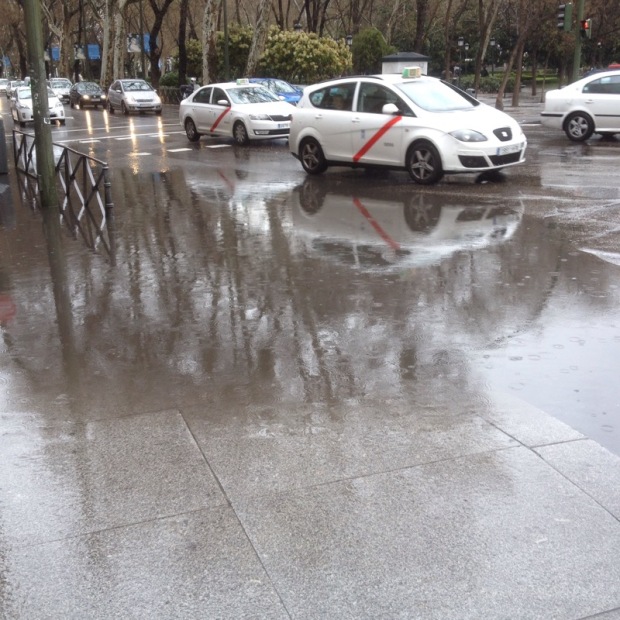 Nothing for it but to engage in some appreciation of the fine art of drinking in the celebrated bars of this city. ﻿ 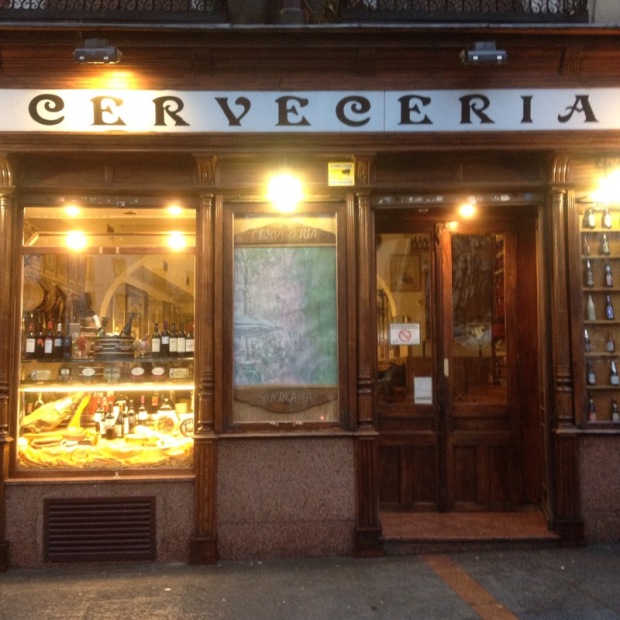 I ended up in one of Hemingways favourites. ﻿ 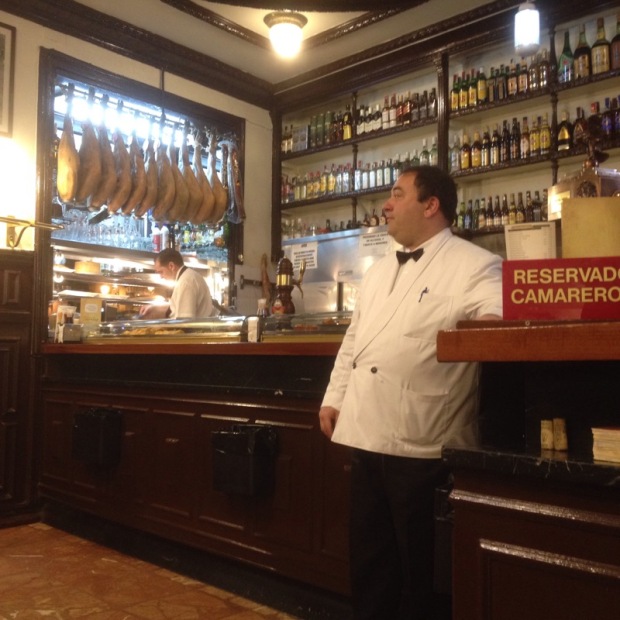 Of course food and eating are also an art form here and the shops reflect that. ﻿ 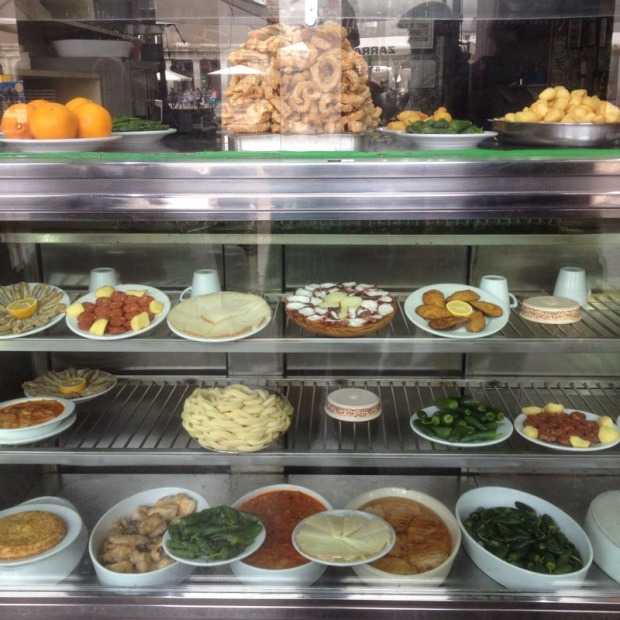 I ended the night by going to the movies. Many of the films shown here are in the original language with Spanish subtitles so I caught up with Pride, about the gay and lesbian support of the miners strike which had a pretty low attendance in spite of the huge and open gay scene here. I guess it was a bit too English. Great feel good movie though.

Today, my last, it was time to tackle the big boy. The Prada, with works spanning nearly 900 years but mostly concentrated on the old masters. Incredible stuff, my vocabulary could not possibly do it justice. I stood in front of the huge Bosch’s, fascinating since childhood, till time stood still. Unfortunately no photography was allowed though I did sneak some later. 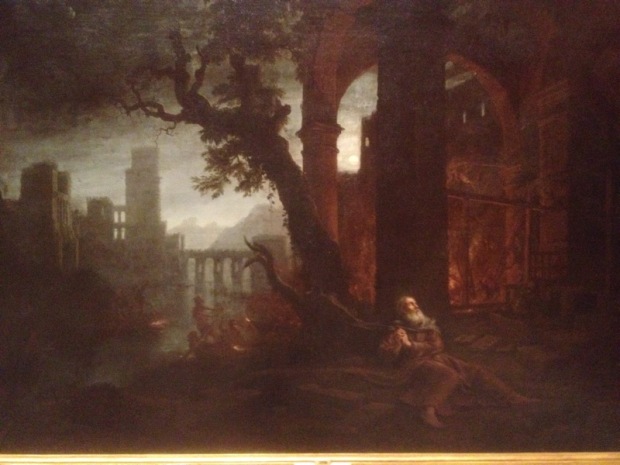 I was interested in this scene of the Med coast near Torreminos from 1860 by Carlos de Haes. ﻿ 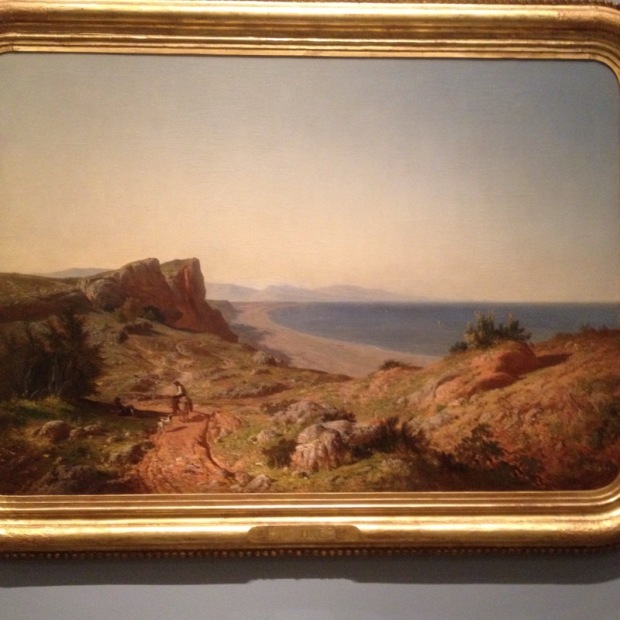 ﻿How things have changed! The galleries had quite a few artists working on their own copies of masterpieces. ﻿

I staggered out to the botanical gardens next door in the late afternoon which had the tulips out. ﻿ 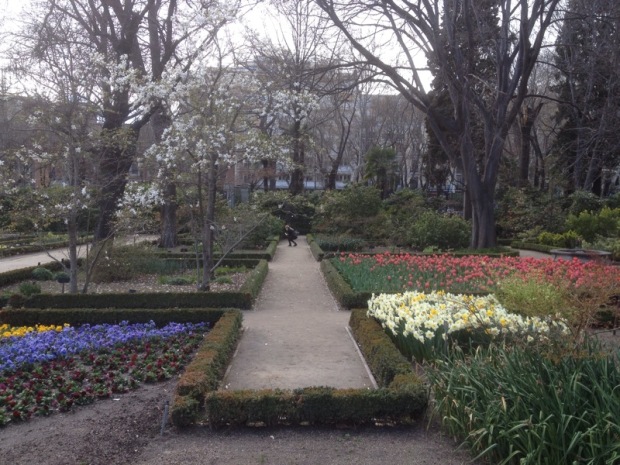 ﻿Into the greenhouses to admire the cactus﻿ 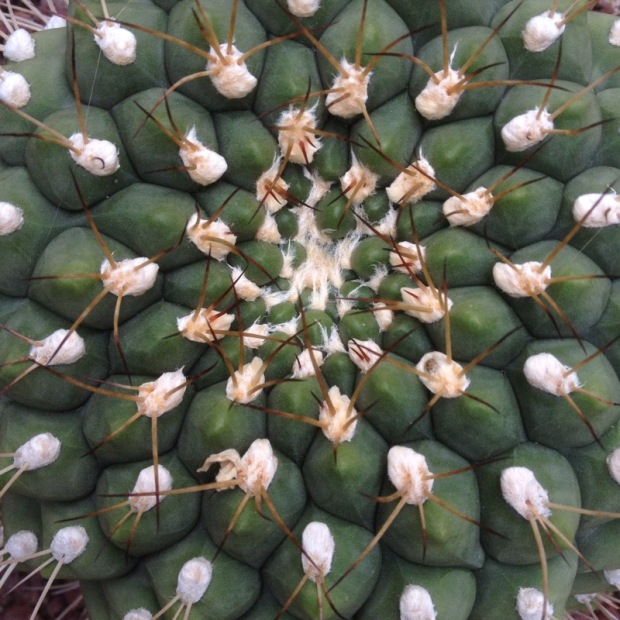 ﻿and the rainforest complete with jungly soundtrack. ﻿ 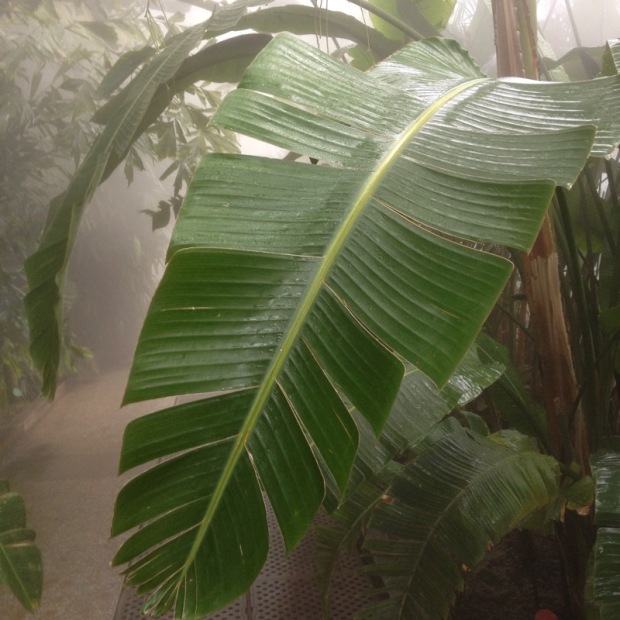 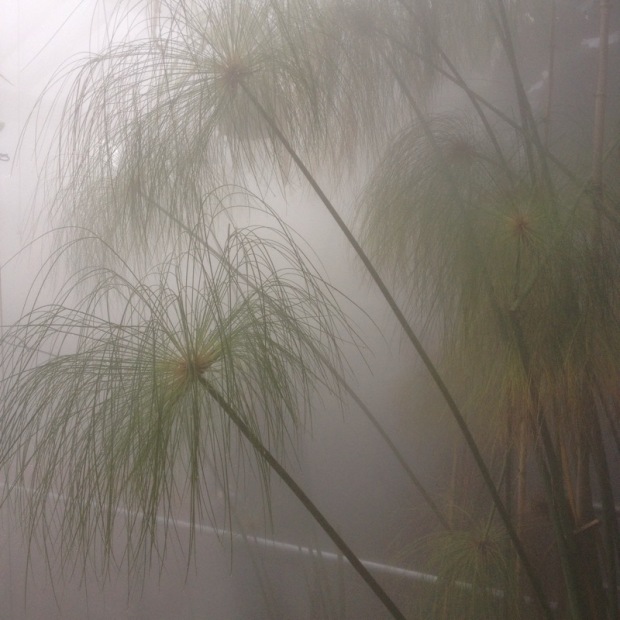 Up the road to Madrids green heart, El Retiro park, a godsend in summer I’m sure. ﻿ 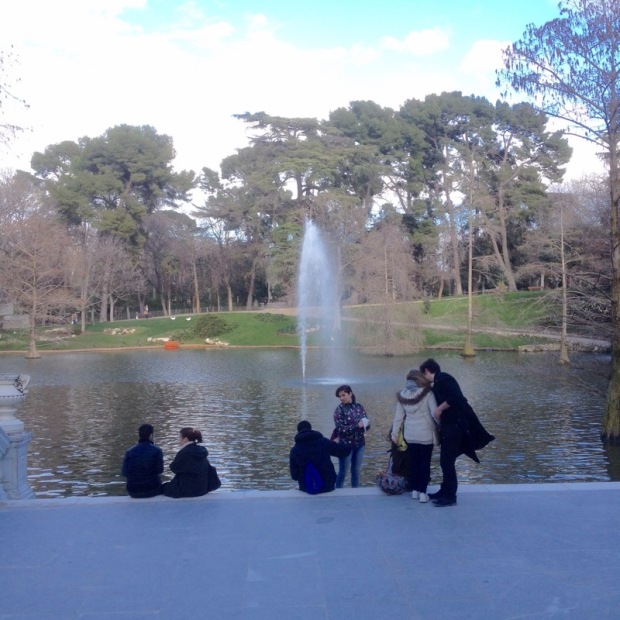 ﻿Where I discovered more art in the palace of Velaquez showing modern sculpture by Italian Luciano Fabro. ﻿

And finally, nearly sated, I called in to the Palace de Cibeles for a couple of cutting edge shows of new work by a host of artists. On approach I reaLized the cops were out in force again as were the demonstrators. ﻿ 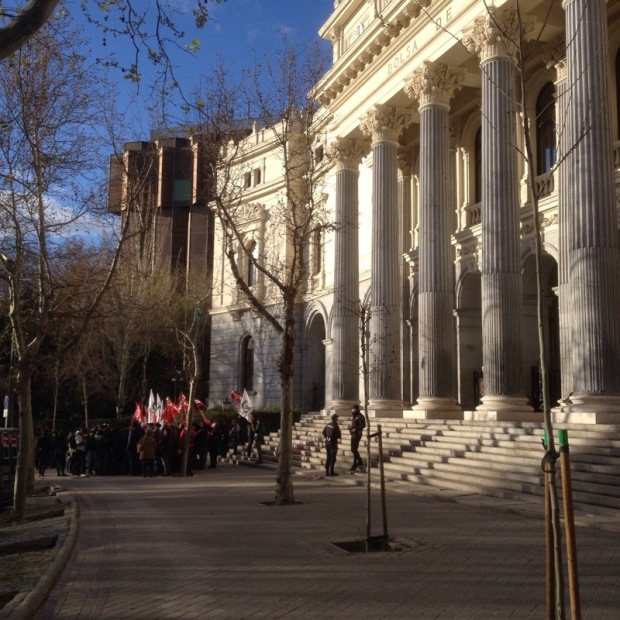 ﻿Inside there were 4 floors of this huge building given over to art displays and a restaurant and bar above.

﻿One show was strictly no photos another was not ??﻿ 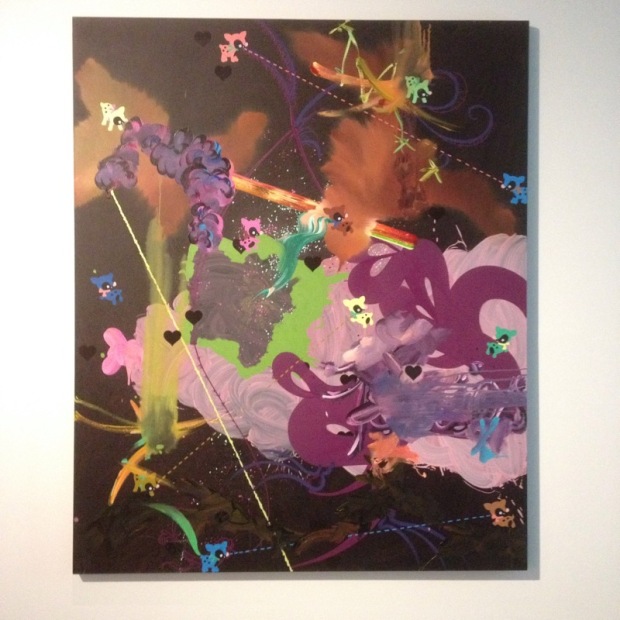 While I’d been passively looking at art some of Madrid had been gathering for more democratic demonstrations. ﻿ 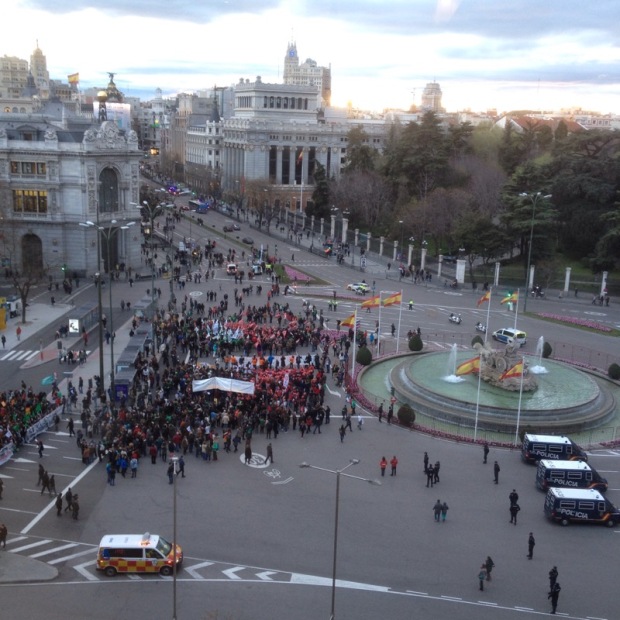 ﻿And I have to hand it to the civic authorities because they know how to deal with it in a organised fashion. The police controlled the movement of the crowd that was followed by ambulances and civic defence vehicles and bringing up the rear were the clean up crew in formation. ﻿

So that was Madrid for me. A vibrant stylish city that loves it’s food and drink and its art and culture. It loves to party. It’s in your face but not brash.

Gort has its work cut out to follow that.