We enjoyed a morning bring down the tone of our campsite on the outskirts of Krakow by hanging up our washing and airing all our cushions and bedding etc surrounded by the smart luxury motor homes. We have a “camper van”. Big difference. 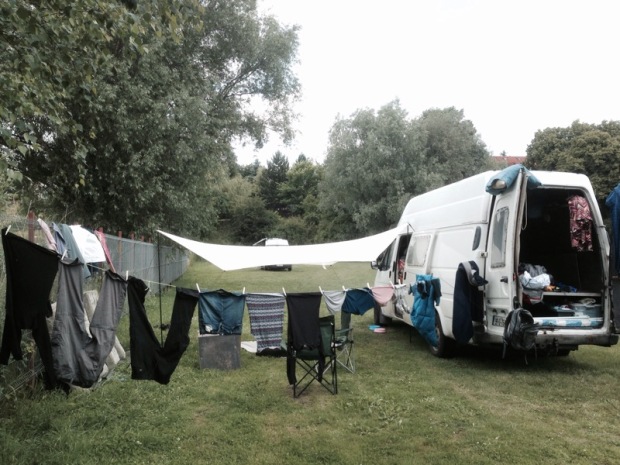 We hiked up through the Wolski Woods from the camp to a viewpoint overlooking Krackow. Some of the trees sported an unfamiliar bark 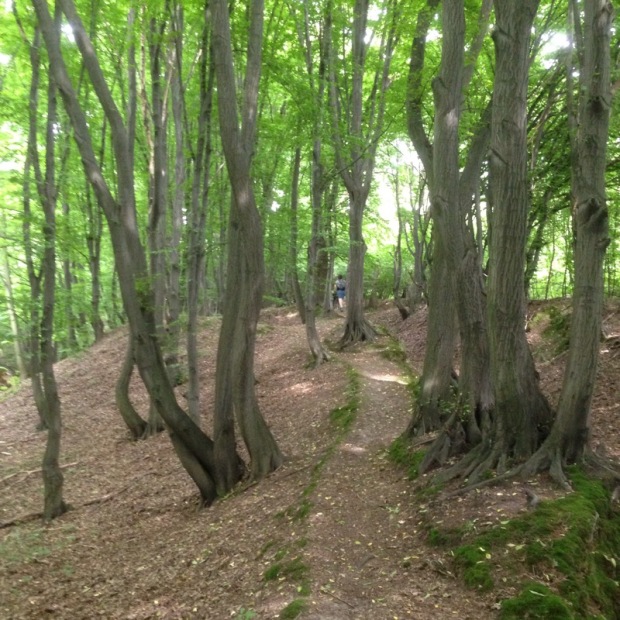 and there were little allotment gardens and the “chaty” huts that have been sure a feature since East Germany. We had learnt in the Communism that after so many people had been housed in hastily built prefab blocks of high rise flats with their thin walls and lack of privacy that a huge movement had arisen of cabins with little gardens being put together DIY style in the country for people to escape to at weekends and enjoy their own little empires. 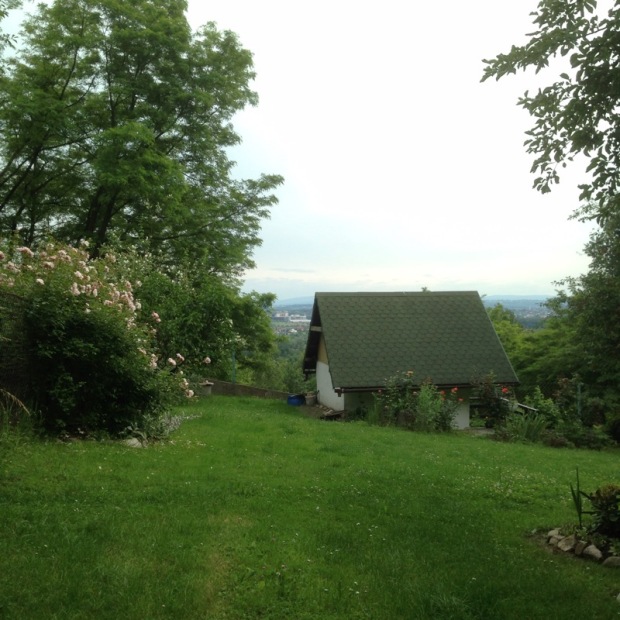 At the top of the hill we emerged out of the trees at a giant mound with a spiral path to the summit. We discovered that it had been built to commemorate Tadeusz Kosciuszko, a polish hero of the 18th century, who had fought for Independence in the American Revolutionary War and then took on Russia to free his Polish homeland. Unfortunately he lost and Poland ceased to exist for 125years. 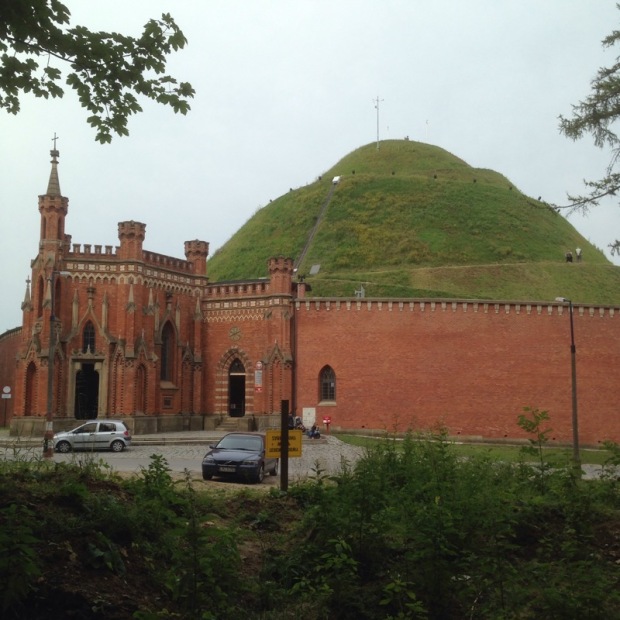 A hero nonetheless, the mound contained soil from every state in America and was crowned with a mighty boulder from the Tartry Mountains, Poland’s spiritual heart.

There was also, luckily,a friendly bar/restaurant  up there and we stopped to re-hydrate and take in the view of the city while chatting to a Polish family who had moved to the States in the seventies.

We tried a different route back through the woods and got lost but stumbled upon some lads building an impressive and extreme mountain bike trail. The photo cannot do it justice as it covered about an acre but they had sure put the time in. 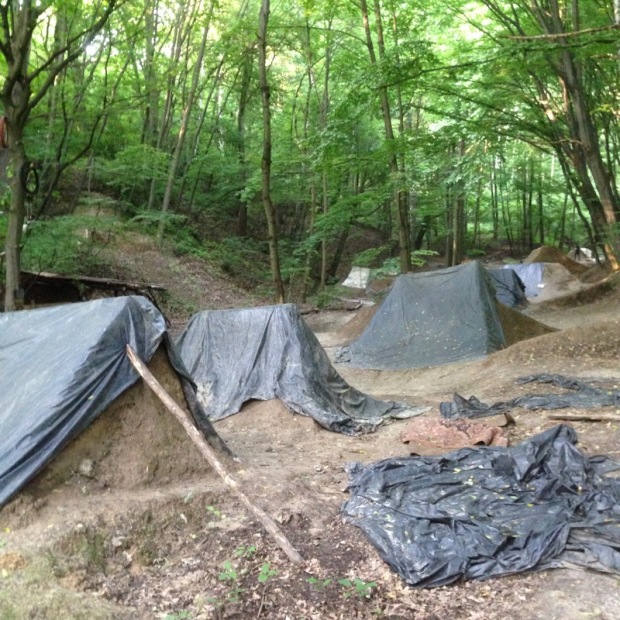 The wooded campsite was only 4km from the city centre so it didn’t take long to drive in the next day to explore. Like Prague, Krakow has a fine big river running under it’s castle 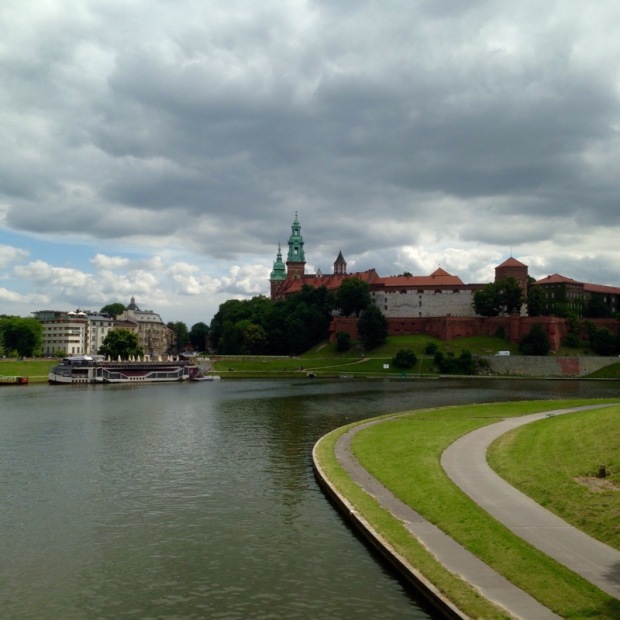 and a wealth of churches and imposing architecture. 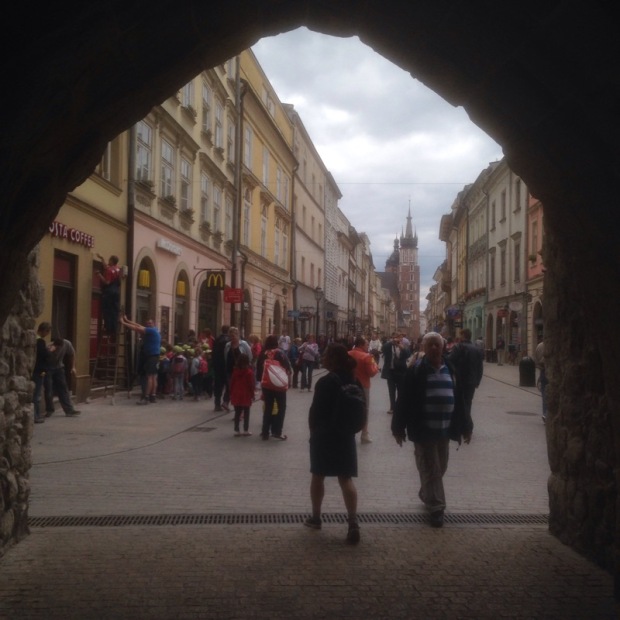 Another local hero features prominently everywhere here. He was upstairs in the window of this building. 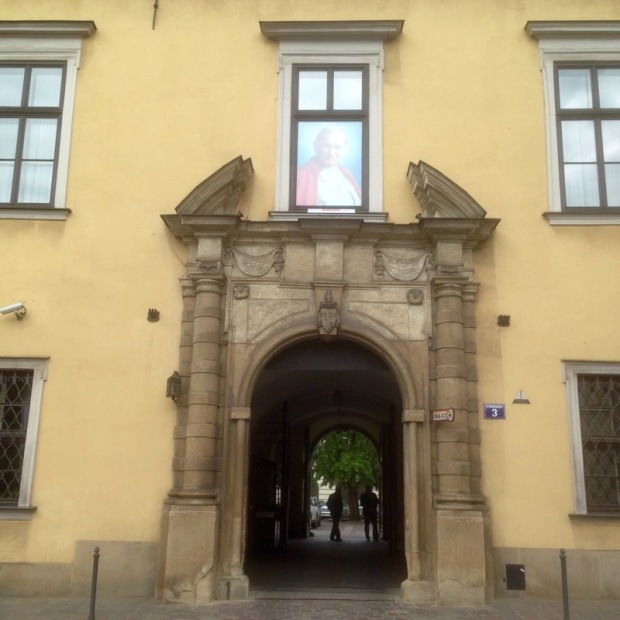 The archbishop of Krackow and born nearby, Cardinal Karol Jozef Wojtyla, known to the world as Pope John Paul 2nd. The only Polish Pope in history, and the first non Italian since 1520, he is credited with being instrumental in bring down communism and his image and name are everywhere.

Kraków has what I believe is the biggest square in Europe

and it was a great place have a coffee and watch the world go by ( on Segways and in horse drawn carriage). 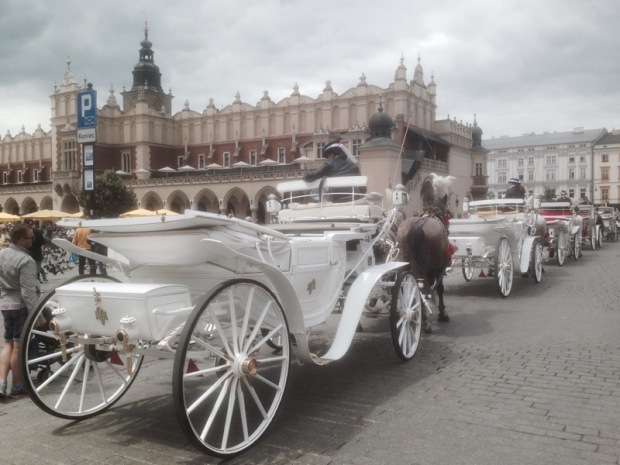 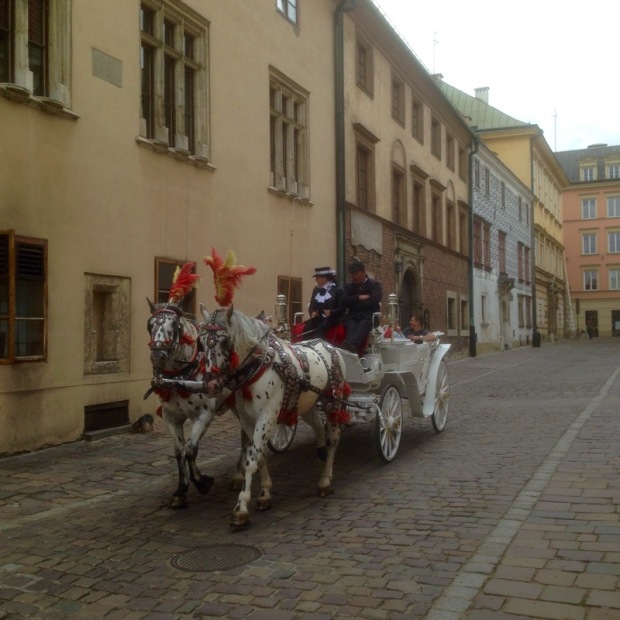 There was a massive indoor market in the middle

and sculpture around the edges. 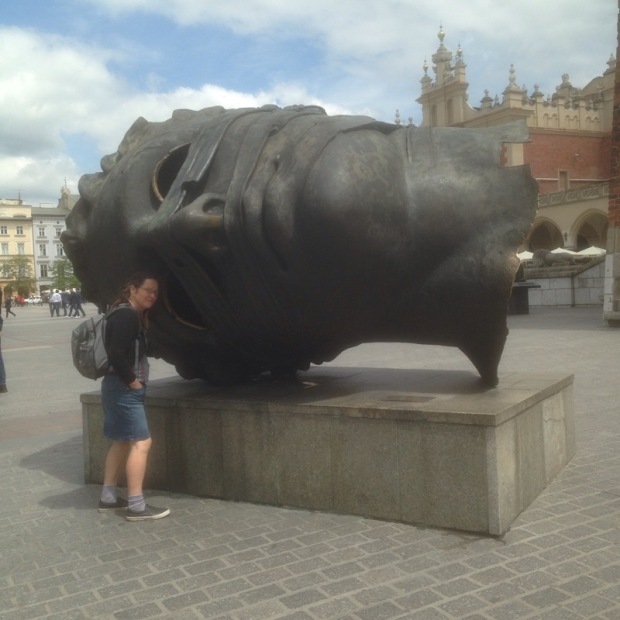 After having such a pleasant time we thought we had better visit the Ghetto area where the Jews had been kept until a worse fate awaited them. It is still a depressingly run down place

containing a lot of hideous memories. No 22 years was a kindergarten where they were all killed when the Nazis cleared the Ghetto.

Just down the road was the scene of some better news- the Schrindler factory where many lives were saved. Now a museum 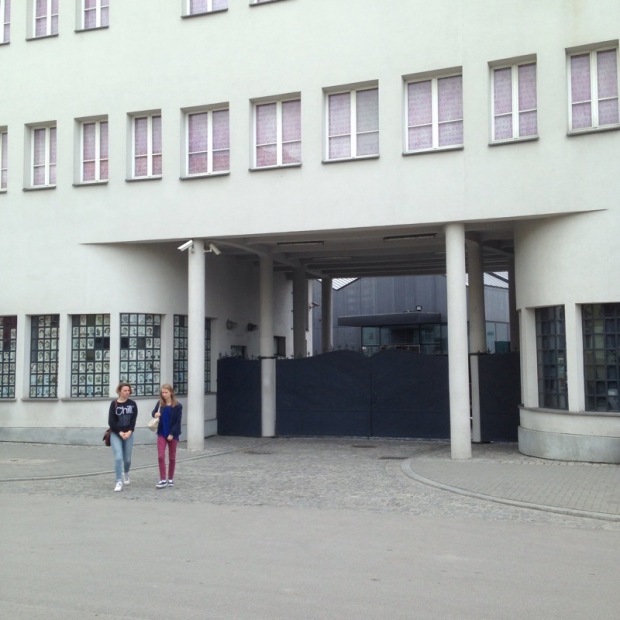 it is next to the Krackow modern art galleries that were displaying huge hoarding of the current show which probably upset a few of the visitors next door.

Time to go South, to the mountains. We headed to the Popradzki Natural Park in the Pieniny and Beskid Mountains where we wanted to hike. We have to stick to Natural Parks because dogs aren’t allowed in the National Parks. We found ourselves a lake side park up for the night overlooking a well preserved castle 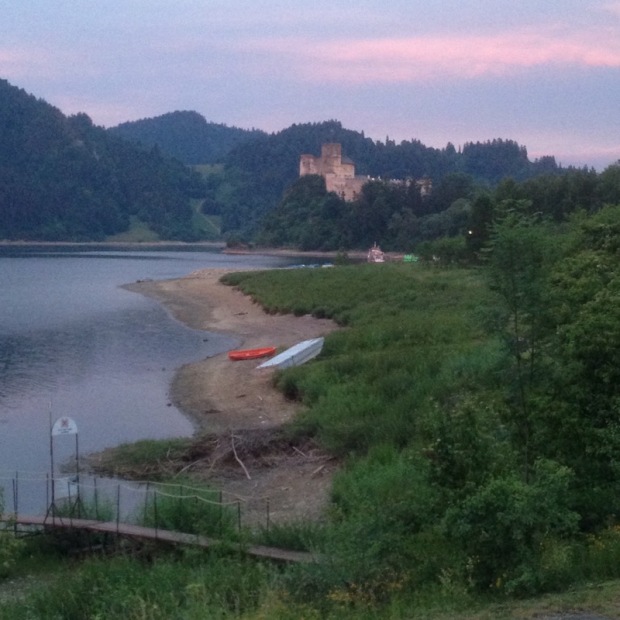 and in the morning headed to a popular and prosperous spa town, Szczawnica, at the beginning of a 26km walk we had put together from the mass of trails on offer. One of the features of this area seems to be floral sculpture and there’s plenty of colourful ones on display.

It’s a pretty wild area with forests as far as the eye can see and the first thing we come across is a bearskin drying on a shed door.

It really is all about timber in this neck of the woods. There is so much of it. In woodpiles, in planks drying in sheds and especially in the buildings. 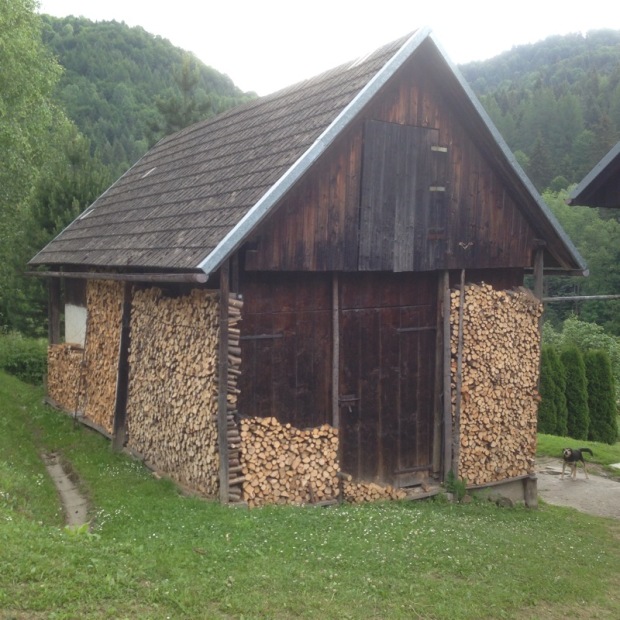 They use all sorts of vehicles for dragging it out of the forest.

We passed wayside shrines and waterfalls on the long steep climb.

Eventually reaching the summit of the highest peak on the ridge at 1173m where what the map  had indicated as a “mountain but” turned out to be a big place where you can eat drink and sleep in a room or camp with benches and tables around a big fire pit complete with cooking cranes and trivets. Very civilised. We discovered their is a whole chain of these places across the mountains, unfortunately mostly in the dog unfriendly National Parks, but we’re hoping we might use them on the Slovak side of the Tatras which allow dogs (might have to wear muzzles).

We discovered that we were on a long distance Papal Path but not what that meant. Did the man himself trek these paths?

Descending through the beech trees 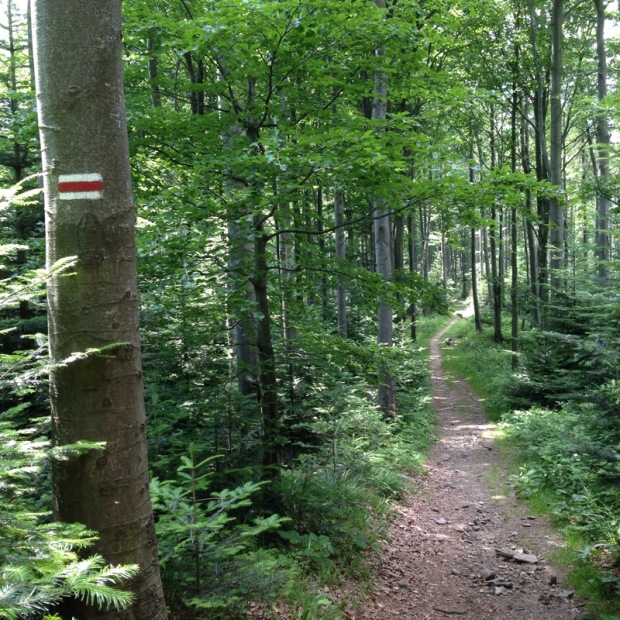 we came down into som lovely alpine meadows and really isolated farmhouses where it was good to see people are still building the traditional style wooden houses. 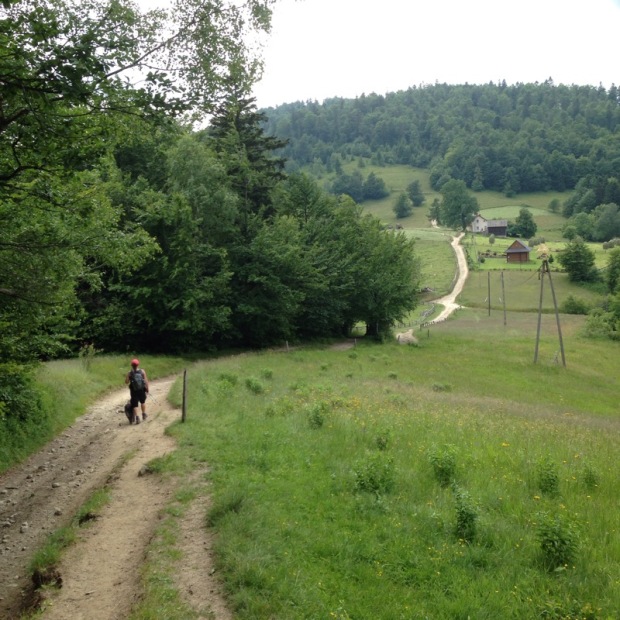 At the end of a very rough 4WD track we wondered how the gang of kids playing there got to school. The parents were out cutting and turning the hay by hand on steep fields between potato and other crops and orchards. It all looked idyllic but was surely a tough life.

An hour or so later we arrived at another “mountain but” and replaced lost liquid with cold beer looking down on our destination. 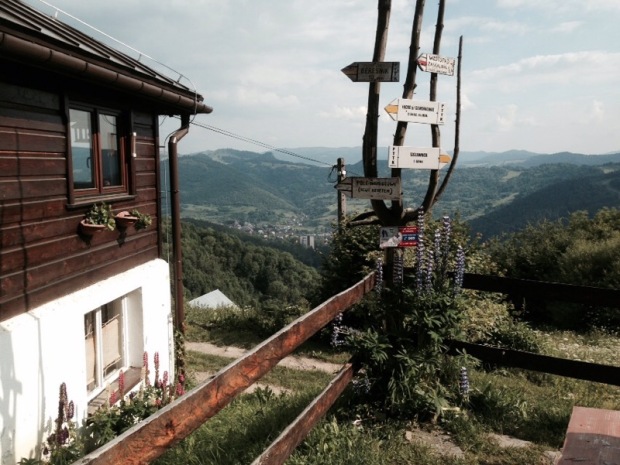 This one had an even better fire pit for the campers. 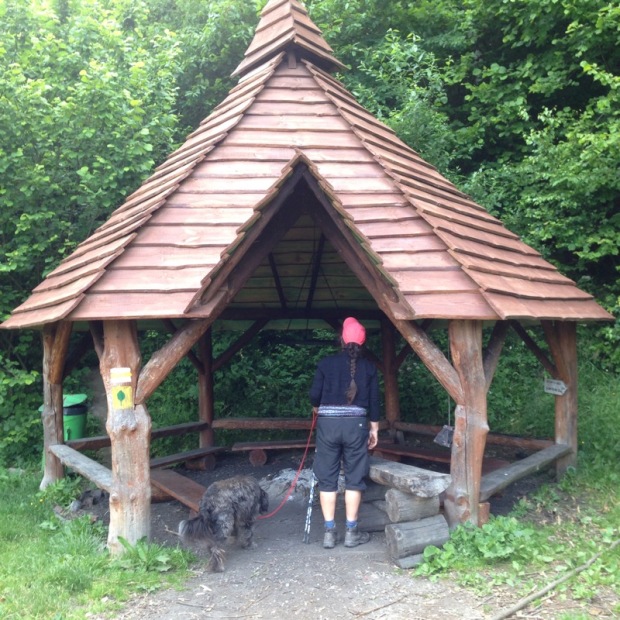 Winding our way through the flower filled meadows we passed a couple of new builds in a truly minimalist style I appreciated. 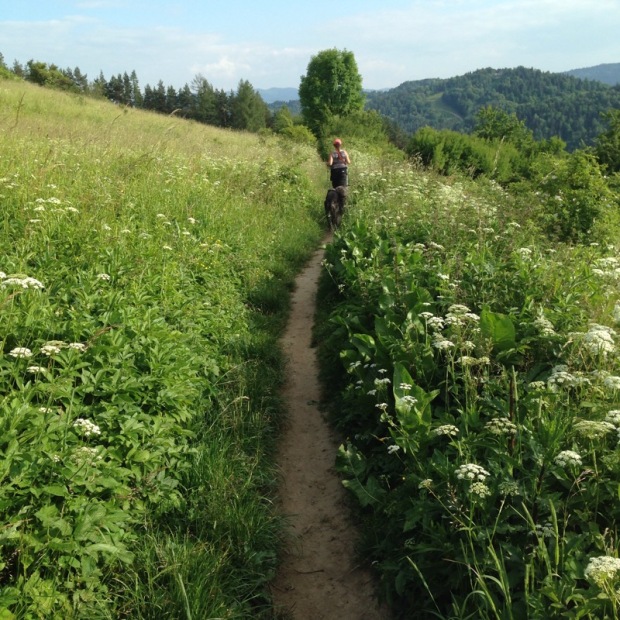 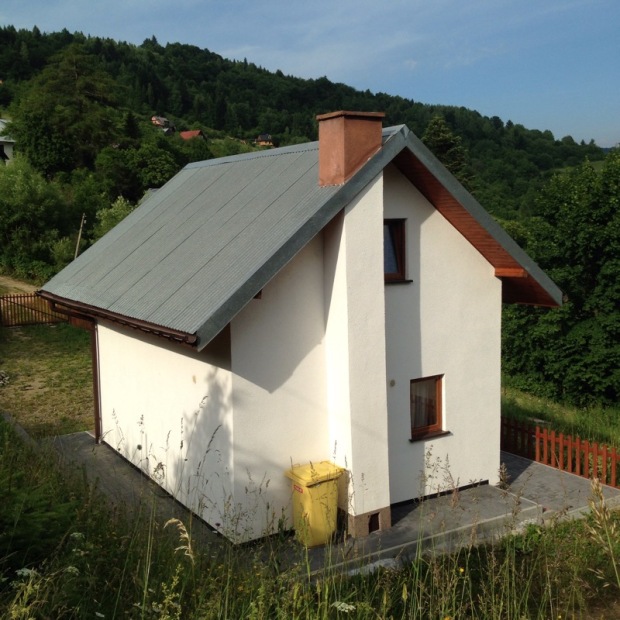 A small amount of timber framing infilled only with rendered polystyrene insulation sheets. You’d want to be careful hammering in your picture hooks.

By the time we got back we were fit only for finding a little campsite on the river for a fiver and heading for bar/restaurant for more pot luck menu choices and to watch the canoeists and fly fisherman.

Yesterday we tried to walk in an amazing looking area of National Park but got turned back with the dogs so headed off to the Sadecki Ethnographic Park which has a big collection of buildings from the region of different types and from different classses and ethnic groups. Just like Bunratty- but with timber. They had shaggy thatch. 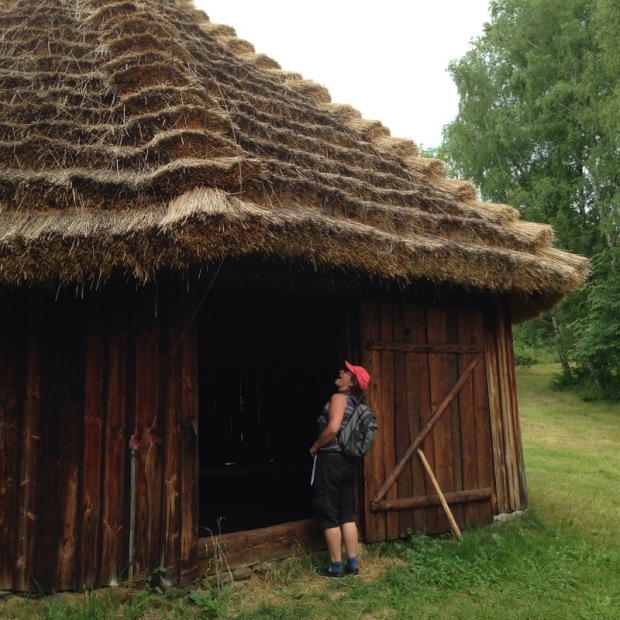 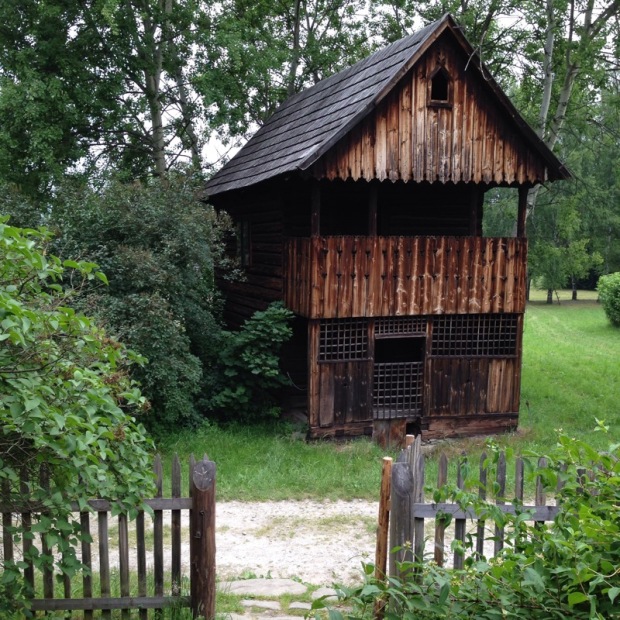 The details in the timber work were a marvel. 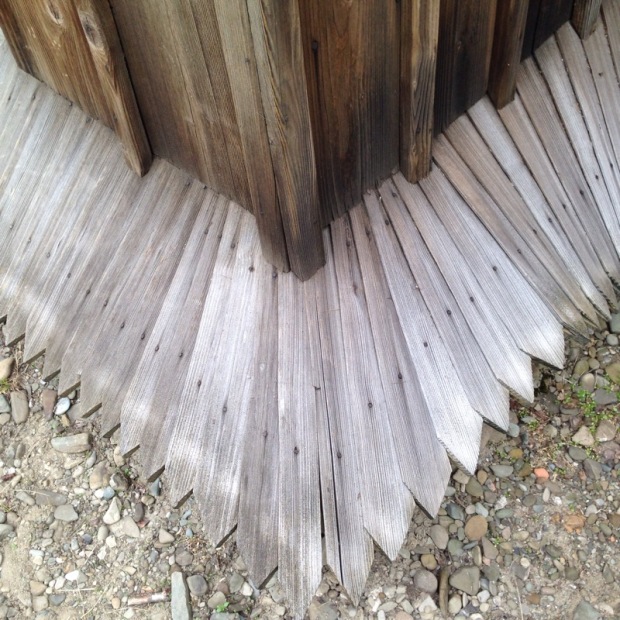 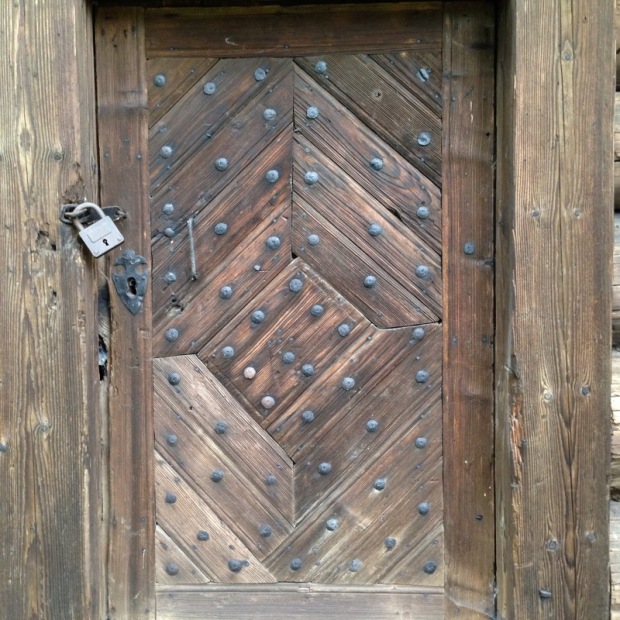 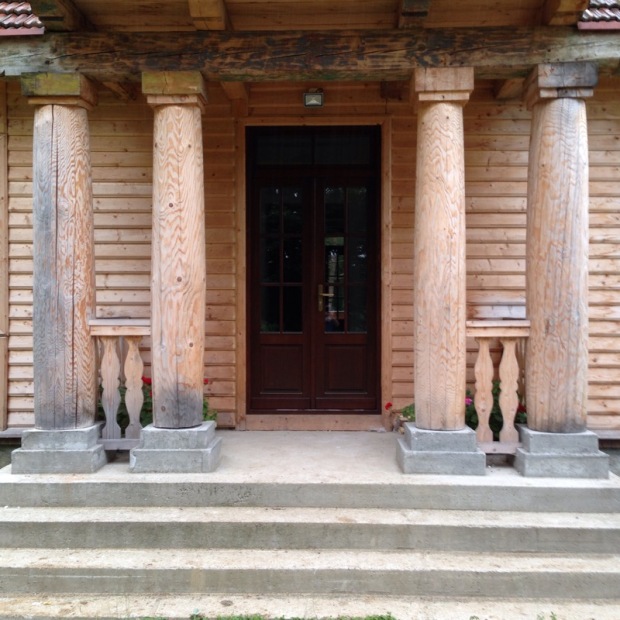 As were the interiors and stoves and domestic bits and pieces. 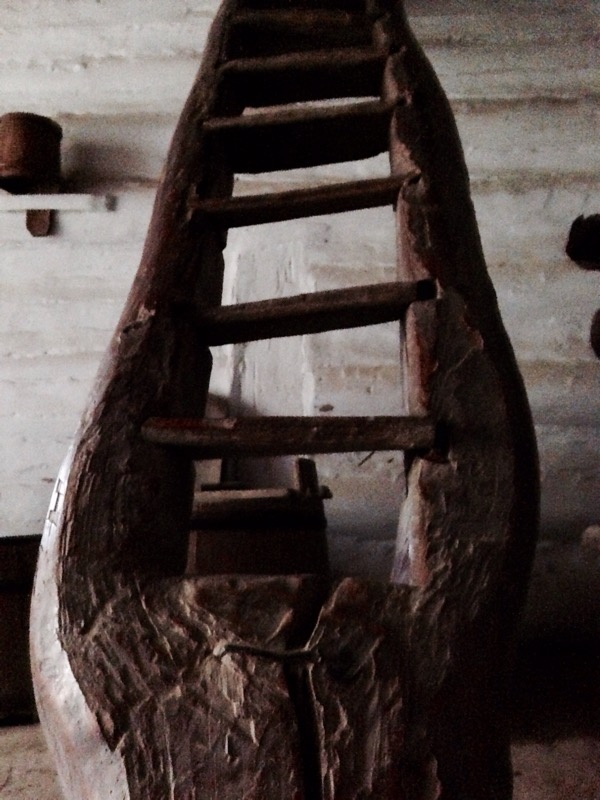 There was a collection of carvings by naive artists

and another exhibit featured the “greasers” of Losie famous for their grease production which they seemed to have travelled the whole of Europe selling from their wagons.

There is even a Greaser Trail that we were tempted to do as a sort of pilgrimage to the lost art of the lubricant men. Unfortunately we couldn’t understand how they made it but it’s worth a Google.

Another bizarre feature was a display of scarecrows that looked like they had been put together by kids as part of a big event scheduled for the next day. 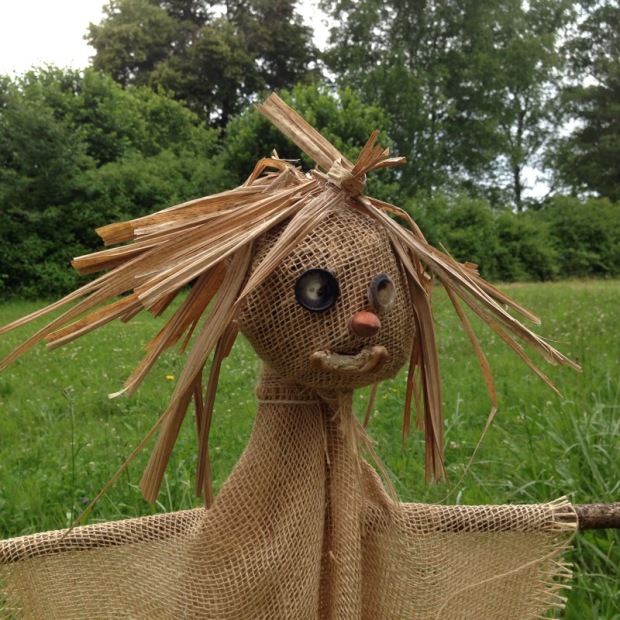 Our final visit was to a house where John Paul himself had officiated at a wedding and where the friendly costumed lady gave us some bread just baked in the massive clay oven. 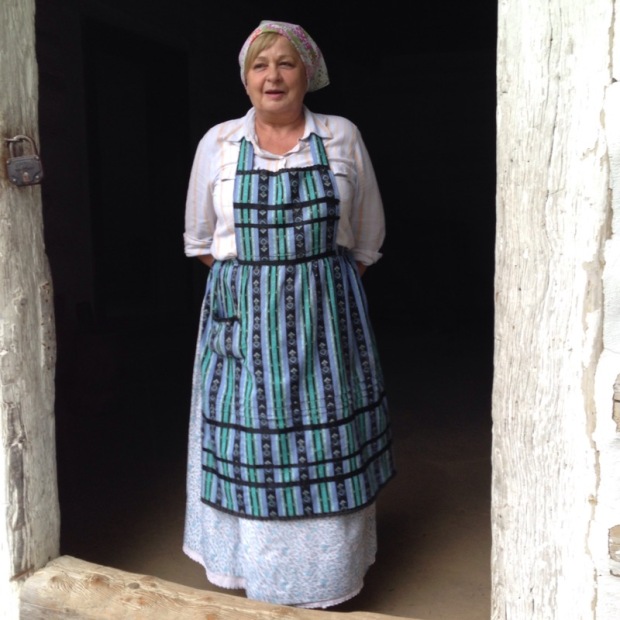 With a thunderstorm forecast and the dog and park situation being a bit of a hassle we decided to abandon Poland and head for the border. We parked up for the night by the Popradzki river under the new bridge for protection from the storm.

The place is called Piwniczna-zdroj. Try asking for directions after a few drinks.