The rain never came on our night under the bridge but it was a fine park up a anyway and we weren’t disturbed by the cars or all the people going to mass in the early morning. Been surprised how early things get going in hard working Poland with a lot of people out and about when I get up around 6.

The river next to us was popular for rafting

and we watched some as we climbed up the nearby trail to a viewpoint before heading off over the border. One of the things that has impressed us here is the trail markings and a new one on us was the one to warn you to pay attention coz something’s changing. 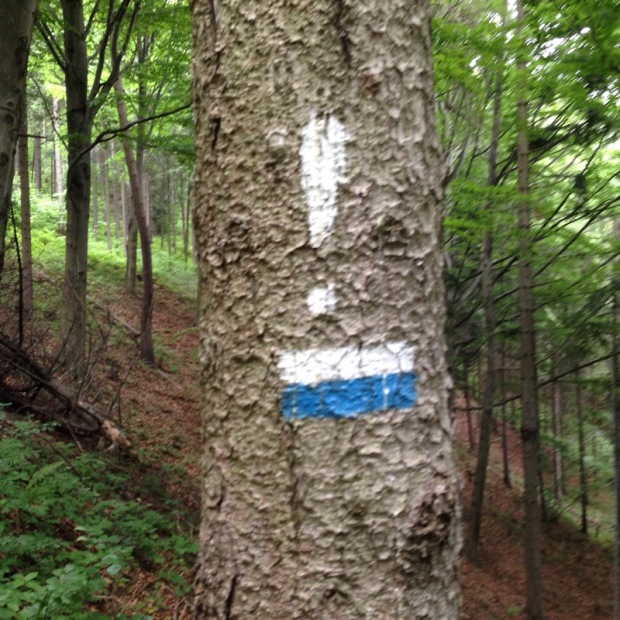 We were in yet another spa town,( these are mineral rich hills), so we had to do the obligatory tasting of the healing waters. 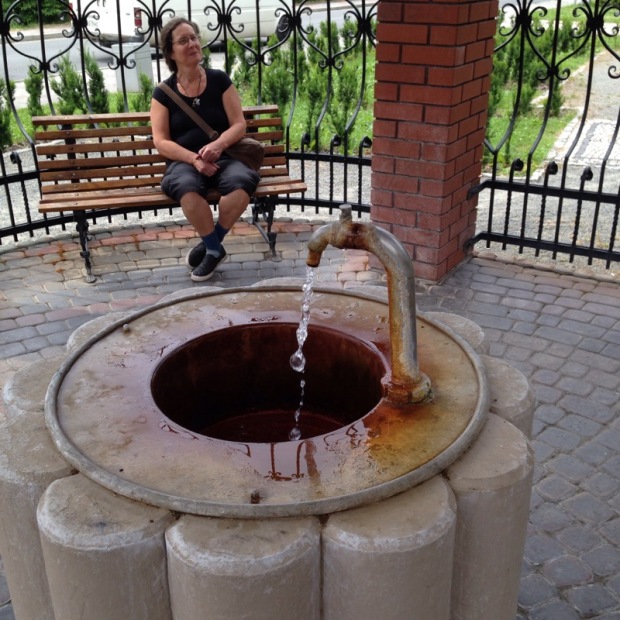 This one was supposed to be good for the digestive tract and I must say the following morning I produced the proof of that.   It still didn’t taste too good.

Speaking of mineral springs we have discovered that the “greasers” mentioned in the last post were actually harvesting crude oil that came to the surface in a few places around Losie and had been at it since the 16th century. How about that?

So we spent the remains of our szotys on a bizarre selection of local produce and some tasty beers and drove up and up to the next country on the itinerary, Slovakia, and strangely, there did seem to be an immediate difference.

The countryside was more open, less forested, wide rolling plains, and getting nearer by the minute the rising bulk of the dramatic Tatra mountains. The towns seemed poorer, the buildings a little shabbier and more plain blocks of flats. There didn’t seem to be any of the traditional wooden houses we had seen so many of in Poland.

We didn’t have far to go and were soon settled into a campsite with a view of the peaks. 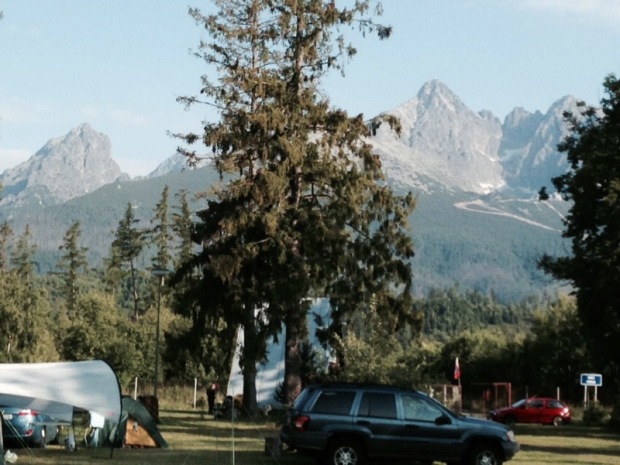 Our early start the next day came to nothing as the thunderstorm finally arrived and we had to abandon the mission to the mountains. We were glad we hadn’t managed to get up there when the heavy rain continued for hours and we hung out in town and camp drying off.

We had discovered that you a take dogs on the cable car so yesterday we headed up to 1700m sweat free and even though it was cloudy too start,

had faith it would burn off later.

And so it proved to be. After half and hour on the stone laid track we started to see some vistas of the jagged soaring peaks and it got better all day as we climbed through the pine forest and then the dwarf pine. 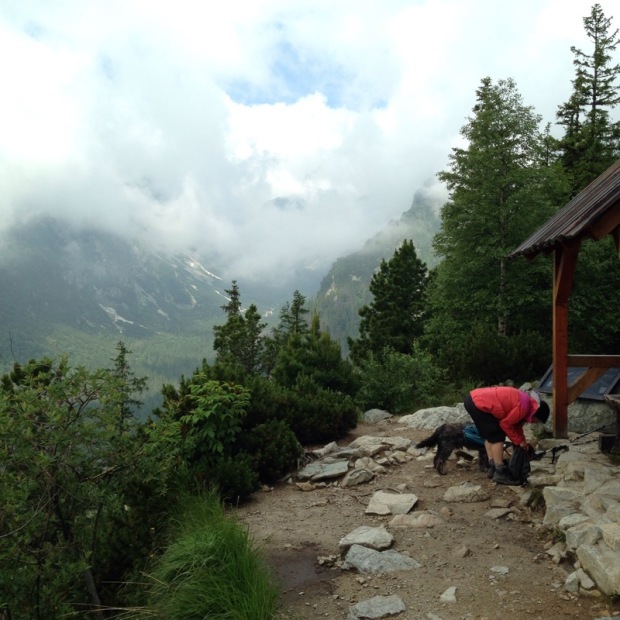 We past areas prone to avalanche

and a lot of dead or dying trees. In 2004 there had been a devastating wind in the High Tatras which had felled 1000’s of trees. In all about 24,000 hectares was destroyed along with railway lines and every road blocked with uprooted trees. It took months for teams to clear the wreckage and the once hidden villages were open and exposed for the first time. Some areas have been replanted, some left to naturally regenerate and some left open to benefit from the new vistas that have opened up.

After seeing a bold as brass otter swimming beside us in the lake the other night and the bear skin on the shed door we were wondering if we might come across a wolf or lynx or wild boar all of which live in these forests. We didn’t but getting up high, above the chata or ” mountain but” we’d stopped at for lunch at over 2000m, we heard the screaching of a marmot and soon after spotted a big chamois peering down at us from a rocky ledge. 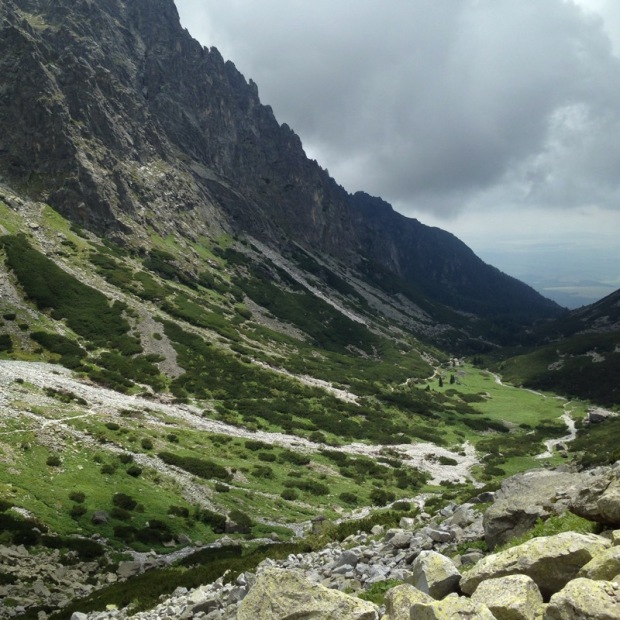 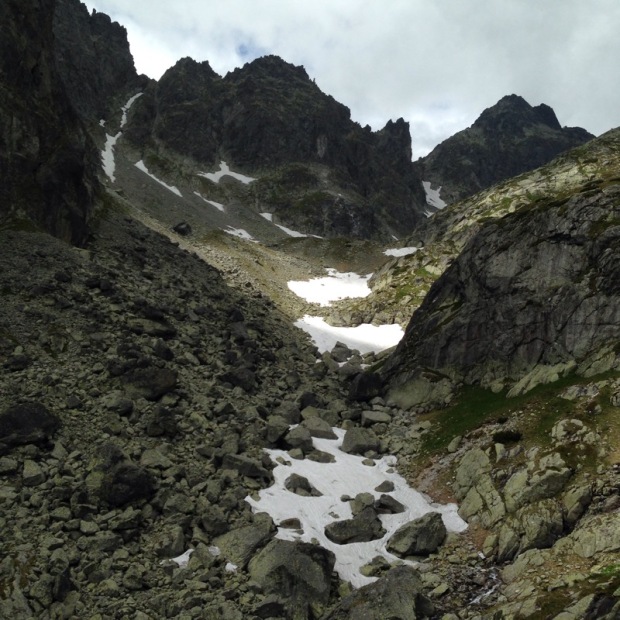 and we were on a section of trail that only opens mid June. We got to a section that involved the use of secured chains to haul yourself up the rock face and the dogs gave up. Sally stayed with them and admired the view while I clambered on to see if I could get to the next pass and get a look at the highest tarn or lake in the whole of the Tratra’s.

Time had run out on us though so we had to hurry back down the valley, pausing only to re-hydrate at a chata, to catch the last cable car. 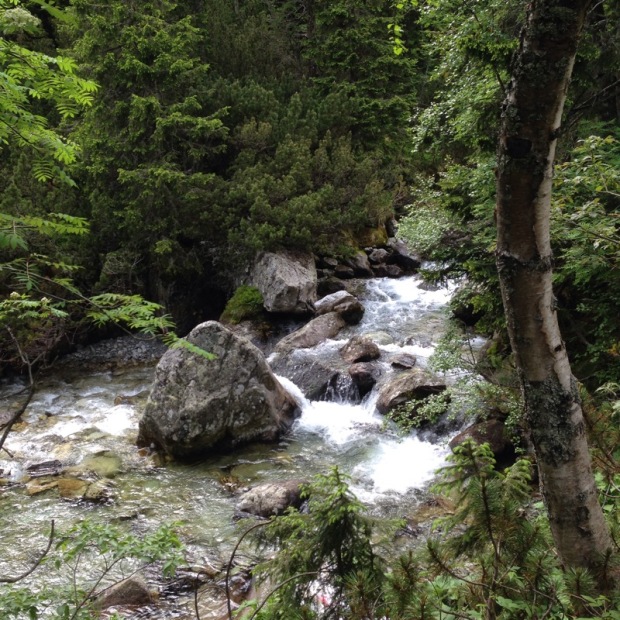 and along the path with views that had been hidden to us in the cloud before. 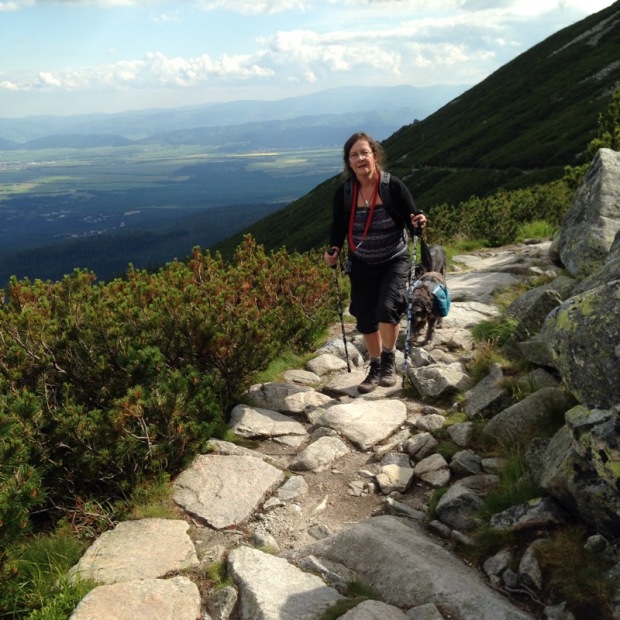 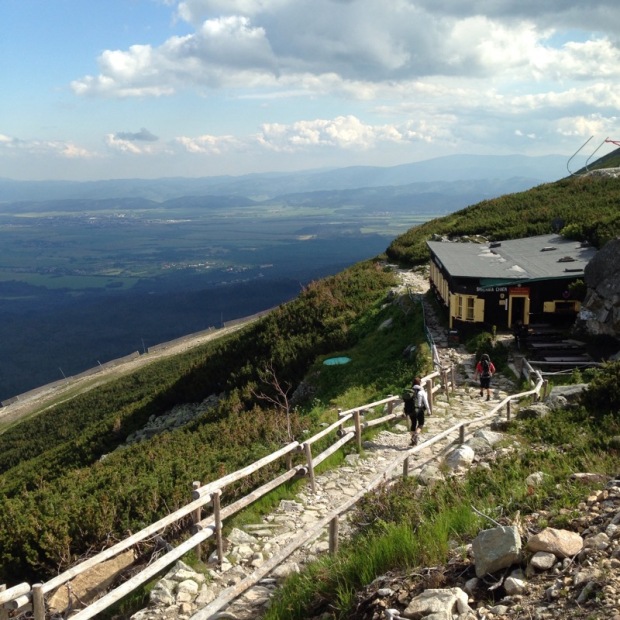 but we have learnt to appreciate what a wonderful service they provide. Everything is portered in but prices are still really good. We are trying to find out if we can stay in one with the dogs and so go deeper into these amazing mountains.