A beautiful clear sky led to an impressive sunset behind the mountains in the west while a fat full moon rose out of the forest to the east.

I sat outside the van, sipping on my bottle of Missis ,

a Slovakian version of Baileys and was suddenly surrounded by tiny twinkling fire flies. I didn’t know they lived in Europe but was entranced by their darting flights of light.

In the morning more surprises from the natural world when I took the dogs for their early morning constitutional. We headed off down the trail out of camp far enough for the job to be done and we’re heading back when I instinctively jumped over something on the track. Looking back I saw. …

An adder I think. Luckily the dogs didn’t even notice it as they past. I’d say it was pretty inactive in the early morning chill but didn’t hang around to find out. In hindsight I should have caught it in a forked stick and brought it back for my women to skin and cook for breakfast. That would have got me in the good husband books.
We’d promised ourselves a “day off” and Sally fancied a night in a bed after a month in the van so a bit of googling came up with a place next to the ski lift we wanted to take for our next hiking/scrambling adventure further west down the range at a place called Strbske Pleso. It a popular ski and hiking resort and with the national holiday weekend coming up to celebrate St Cyril and St Methudious the place was fairly heaving in the hot sun. 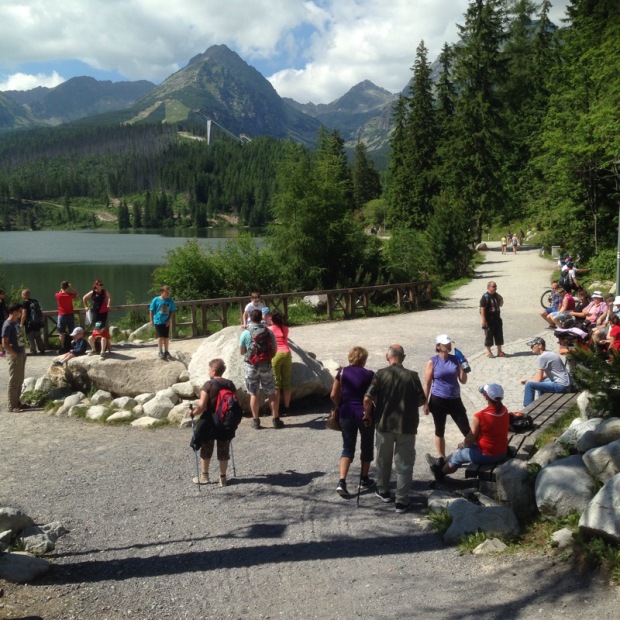 We did a stroll around the big lake, our hike for the day, and eyed up the mountains we were going to be tackling the next day.

There was all sorts of tourist stuff going on to entertain the crowds like tree walking and souvenir buying.

We came across a charming young man in traditional dress playing a strange wooden instrument that was a bit like a tuneful didgeridoo. 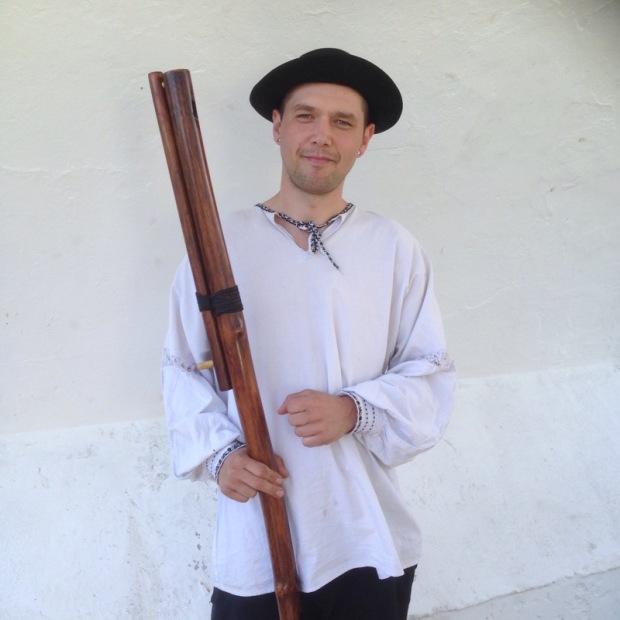 Outside a restaurant some more ideas for my scots pine trunks at home. 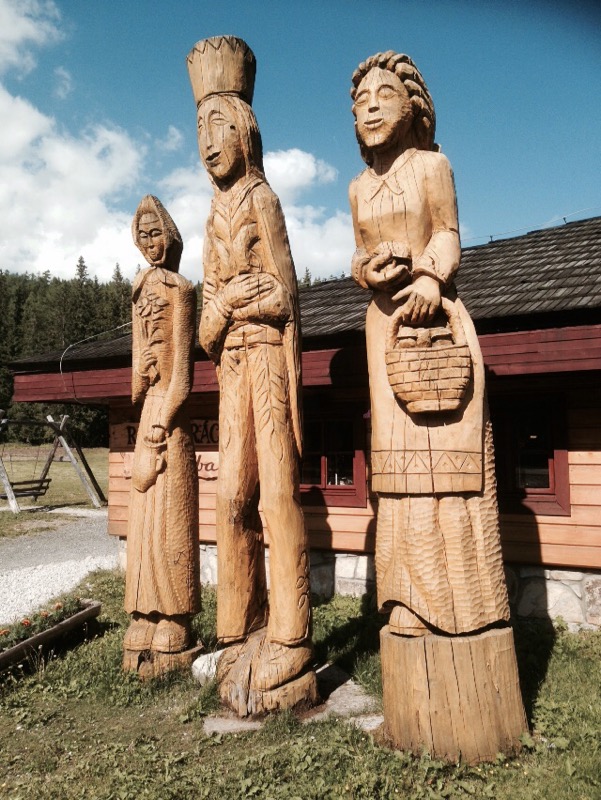 The hotels were a weird combination of grand old style lakeside 4 star  and concrete communist blocks. Ours was the latter.

We had a ” bungalow ” out the back that was pretty shabby but dog friendly and the hotel building had an amazing ” wellness centre” that we spent a good while in reviving muscles for the work ahead. Three different saunas, nice jacuzzi and a chill out room with beds, and the first place I’ve seen NO CLOTHES signs with a pair of crossed out shorts.

To finish the day we went to have a look at the chair lift we would be taking up to 1800m in the morning. The sign told us what to do if it stopped working.

It also told us we could take well behaved dogs if we held them tight but there was no way our boys could cope with that experience.

The morning saw us on the first lift up, a fairly thrilling and surreal trip as we glided nearly silently through the treetops and then high above them. 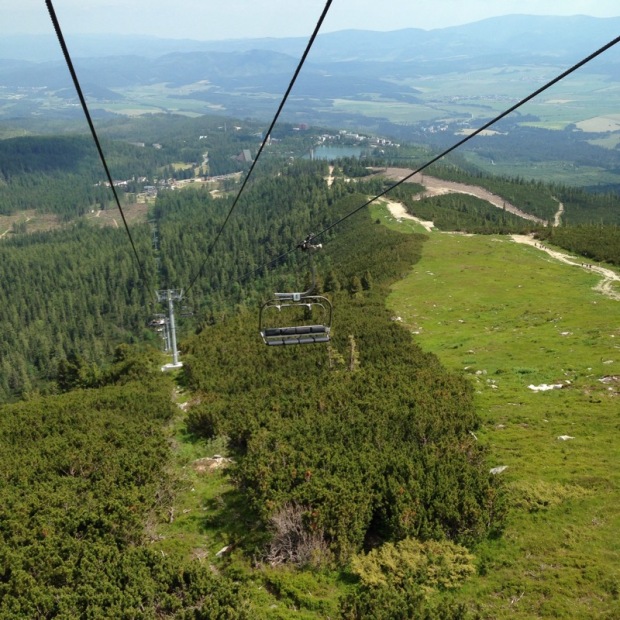 The ex communist state has embraced capitalism to the extent that the chair lift pillars had adverts to peruse as you slide by.

We were soon on terra firma again looking back down to the resort below.

We started off with a climb to the 2120m summit of Predne Solisko which was lined nearly all the way with well laid stone steps.

The work put in to track making has been stunning and has saved these well walked paths from a lot of erosion.

The views from the top were 360 and we could see the valley we were heading up next threading its way deeper into middle of the range. 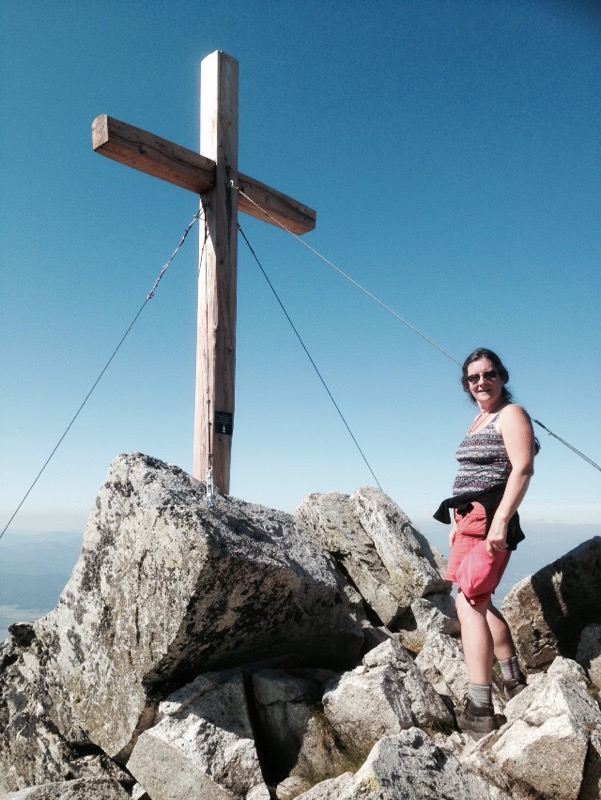 leading up the Furkotska valley past wild flower meadows and streams,

through the dwarf pines, 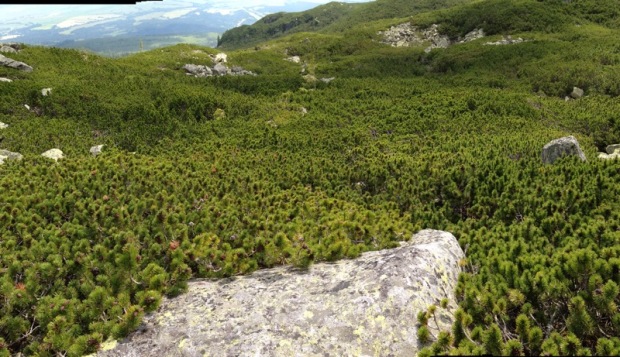 across the tumbled mass of rockfall skilfully laid into track

and up to a pristine tarn where amazingly there were a team of park people diving for information.

We continued to climb higher, surpassing the height we had been at on the previous summit to reach another tarn at 2200 with lots of ice still covering the surface.

Then it started to get really tricky with lots of loose scree climbing very steeply to a Coll about 100m above us. The route was also getting pretty busy by now ( great to be somewhere where this crazy human endeavour is normal, even for teenage girls and oldies like us) and a lot were coming down against us, so we decided the view was just grand where we were and settled in for the Sarnies.

By the time we had made it back down the valley we were grateful for a chair lift ride back down to the van. It might seem like a lightweight approach to mountain hiking  but these lifts allowed us the time to go deeper into the peaks than we could otherwise.

The resort was noisy and crowded when we got back, the dogs were cooking in the van and we got out as soon as we could, heading to the far less visited western Tatras.

We had sussed out a route from a simple campsite in the forest taking us up into the mountains and up and down along a narrow ridge to the summit of Jacubina ,the second highest peak in the Western Tatras at 2194m. From there we would go to another meeting of trails a little further down the ridge on the border with Poland and begin a long steep descent to the end of the valley above us.

The camp was getting busy with holiday weekenders but we found a spot in the shade and went for a meal in the little restaurant with some great menu translations.

The next day’s walk, our last in the Tatras, was the most spectacular and probably the toughest. It only came to 21.5km but it took us 10 1/2 hrs and even though we started at 6 in the morning we still had a lot of climbing in the heat.

We realised how lucky we were when we came to a sign warning that the track was closed to the public mon to sat and we were there sun. This was a serious foresting area and I guess they didn’t want joe public wandering through the danger zone. Tractors were cableing massive logs down the mountain, dragging them along the track and leaving a mass of brash behind.

The effort started luckily in the shady forest 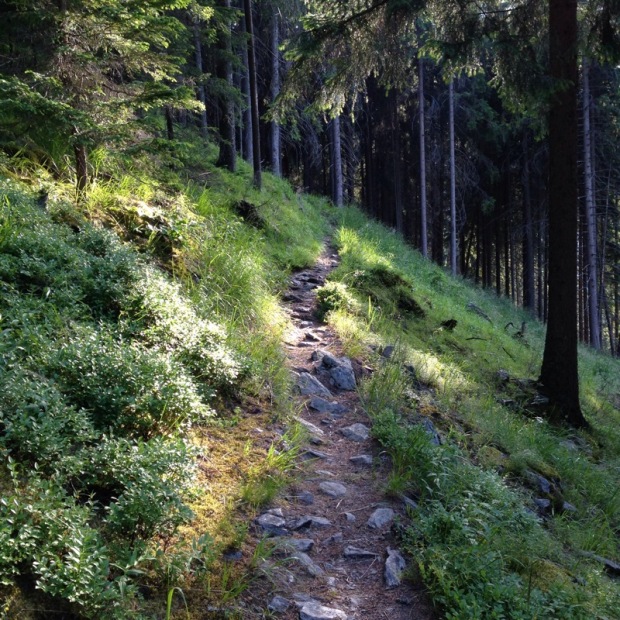 as we climbed up to the ridge and emerged above the tree line at about 1600m. 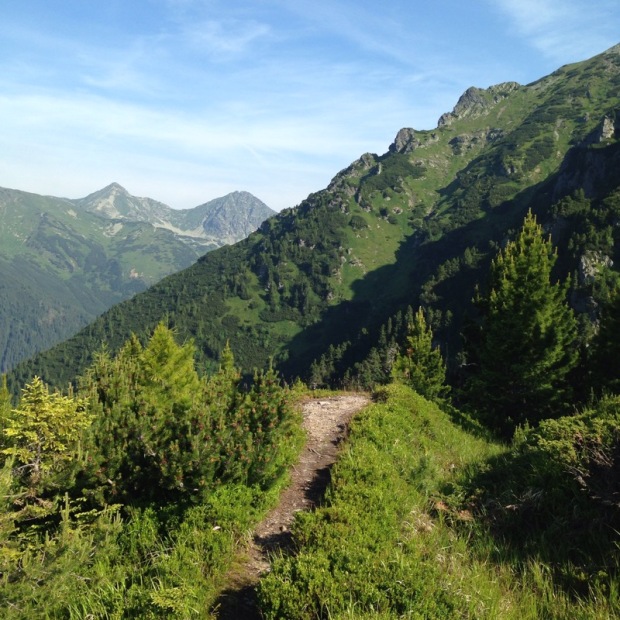 The hot hard work began but was rewarded with more and more spectacular views as we rose to the peaks.

We could see our ridge laid out ahead as a white line across the green.

We surprisingly caught up with a group of Slovak hikers, one of whom had been in Cork for a couple of years, and we chatted as we climbed to the next peak.

We had made the cardinal error of not bringing enough water so had to hurry on as they stopped for food/ drink and reached the high point of the day with some other lads.

One more peak to the borderline and on the way we met two park rangers who told us our dogs should be on leads (we knew and we’re glad they didn’t mention the muzzles that are also required. They were very nice and after talking for awhile said that as ours were so well behaved it was ok but asked to take photos to show school kids what not to do!

They explained that a dogs bark made the chamois think it was a wolf and freaked them out.

Then we were looking down into Poland and the zigzag tracks going across the mountains in all directions.

By now we were all really gasping and were very grateful when after a long and difficult descent we came to cool clear water pumping out of the mountainside. 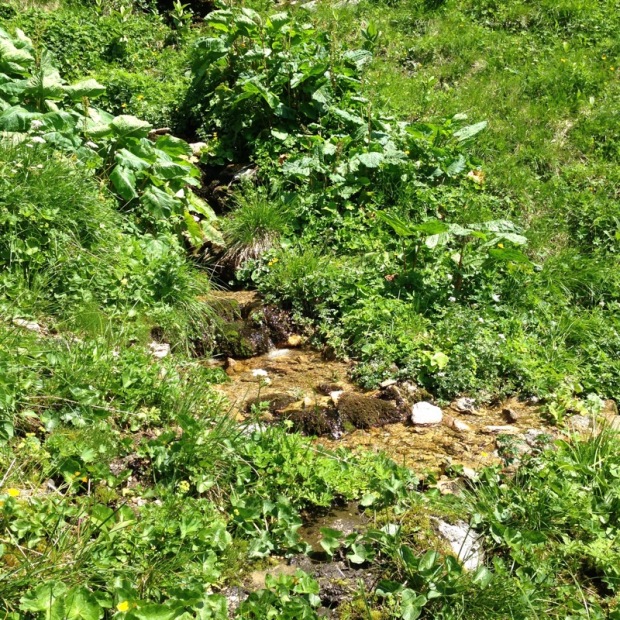 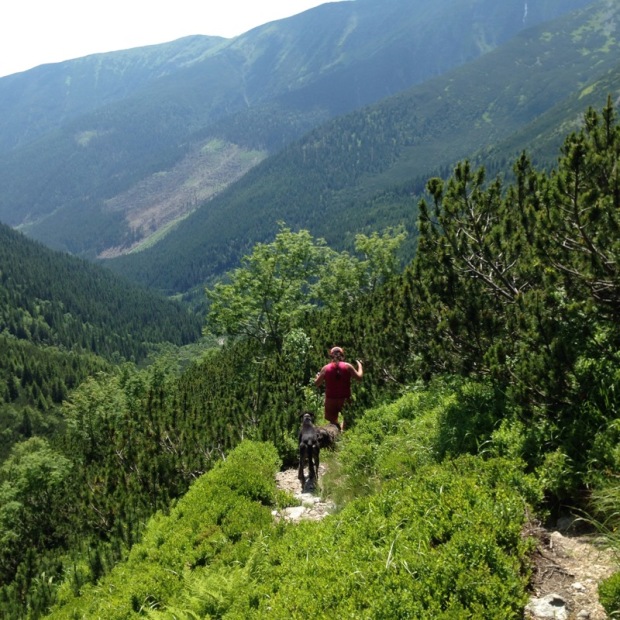 and finally,wearily into the camp.

Feeling very hot and craving cool water to swim in we quickly packed up and headed to a large lake / reservoir about 20 miles west where we found some excellent R+R parking. 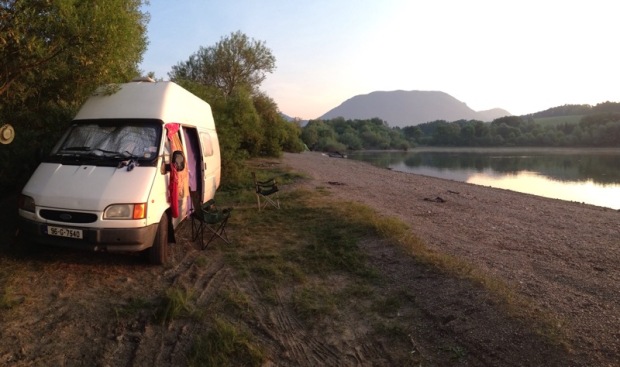 And in for a swim.