We shared the shores of Liptovsky Mara with a mixed bag of free campers. There was a gang of hard partying youth celebrating the saints  day holiday with drink and a mix of techno/folk chanting and cheering in a well behaved way till about 9.30 when they politely turned off the pumping sound system. There were some families with kids out for the (hot)day. There were a lot of serious fishermen with lots of gear and multiple rods and inflatable dinghies with electric motors who were constantly on the case, catapulting bait, checking lines, throwing nets, putting out floats, motoring and rowing around, and reeling in a lot of poor stressed fish that then got released again making the whole operation a bit pointless to me. And in the middle of it all a couple of young lovers oblivious to everything around them cavorting and pawing and giggling on the beach.

It was a nice place to wake up and very tranquil in the early morning light.

The fishermen were already at it, working their books as they floated through the mist rising on the water.

The whole day was spent in camp watching the goings on and providing some entertainment ourselves by putting up all our shades and windbreaks with a complex system of lines and pegs, fiddling around with them and taking them all down again. We did a lot of swimming to cool down although as the day went by the water seemed to heat up and the slight algae green hue began to deepen and by the evening the lake had begun to resemble a soup that I didn’t think was too good for all the nasty swollen bites I’d been nursing for a few days.

We were heading to the Lesser or Lower Tatry mountains the following morning and a bit of googling came up with some healing water thermal and mineral spa pools on route. So our first port of call the next day, after a finely executed shopping raid on some superstores, was the lovely little town of Lipovsky Jan with its mosh mash of old style buildings 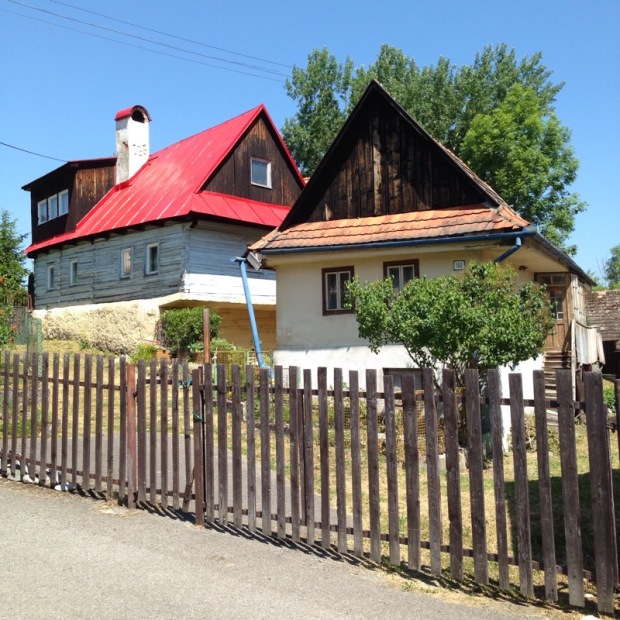 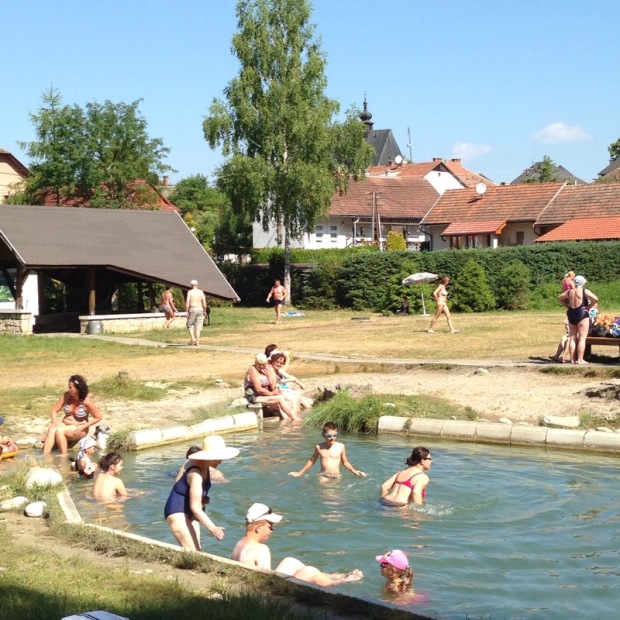 The water was only slightly warm but bubbled up through a pebbly bed with a sulferous odour and a bit of a sting but I convinced myself it was good for my legs quite successfully cos they’ve been much better since.
Sally got to share the central bubble pipe with a bunch of friendly laughing locals who had no qualms about getting up close and personal but didn’t wholeheartedly recommend the experience so we headed for coffee in a quirky little cafe stuffed with stuff.

Feeling suitably healed and refreshed we headed for the hills. And what hills they were. They may have been the Lower Tatras but the steep climb proved too much for poor old Tranny who was spitting boiling water and gasping and wheezing by the time we reached the restaurant at the pass over the top. Nothing for it but to have a bowl of hearty Farmers cabbage soup

and some Stray sheep, which turned out to beaming of cheese filled dumpling – sort of, while we let her cool down and hoped we hadn’t burst or overcooked anything.

I’d read recently about a couple of Irish lads who had hiked the ridge of the Nizke Tatry where we were on a leg of the E8. The E8 is one of those long distance European trails that intrigues and tempts me 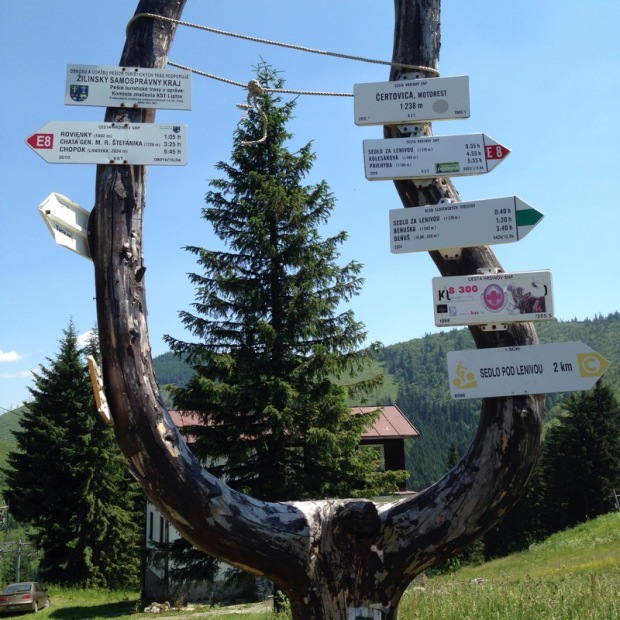 this one especially so because it starts on the Atlantic coast in Co.Kerry ( and ends in Istanbul a good while later). I felt compelled to walk a little on a path that led all the way home so we made a symbolic few steps on the ridiculously steep track. 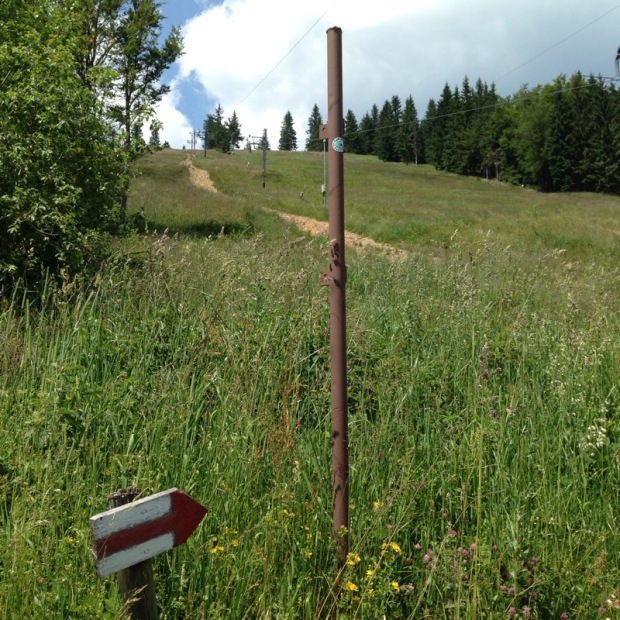 The midday sun was really beating down so we retreated from the E8 and set off again in search of cool water to immerse ourselves in. We had the name of a lake or resevoir on the south side of the mountains at Krpacovo and Serena got us there but we couldn’t see the lake. The next hour or more was spent wandering the tracks looking for it but all we found was a bizarre  Soviet monument that had been smashed up at some point. 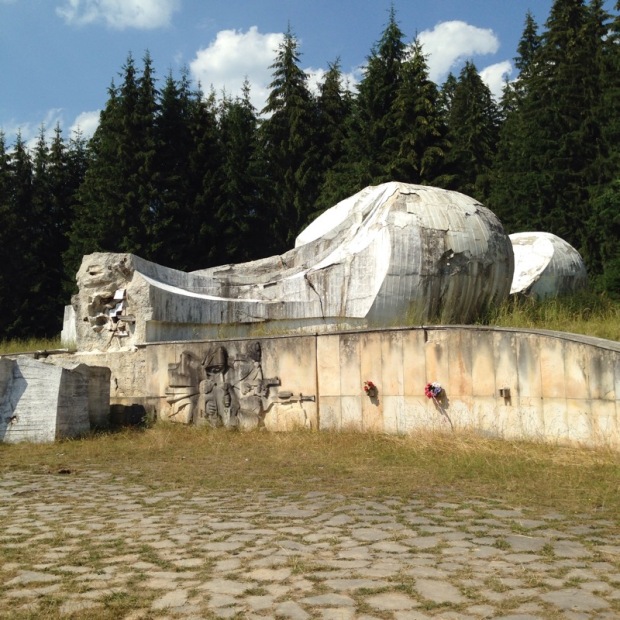 We had more or less given up and were driving away when I spotted the water through the trees below us. It didn’t take us long to get in with the rest of the cool seekers. 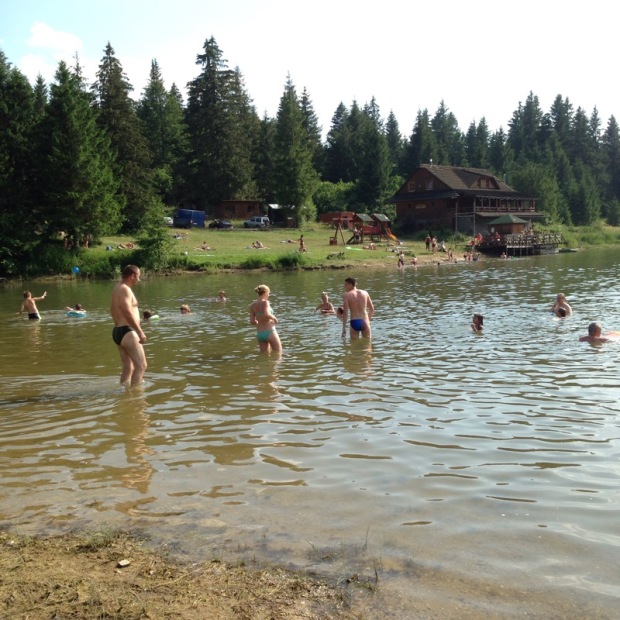 There was another imposing ruin here too. Overlooking the lake was the huge bulk of a brutalist block of ,I guess, more Communist era leftovers.  The hotel from hell.

but down around the shore it was a different story with a funky little bar and a collection of what looked like DIY dwellings.

Also on the lakeside was a wooden “kobila” or restaurant that said we could park up there for the night.

An early morning swim in the now deserted lake and it was time to pack up and drive out of the mountains onto the main roads and down to the border. Goodbye and thank you Slovakia, hello Hungary.

We’d heard that this crossing can take time with paperwork but it was fine, we just had to buy a vignette for motorway driving.

It was less than 100km to Budapest but there was a national park we knew of some hikes in so we turned off onto minor bumpy and potholed roads and headed past the sunflowers and into the oak and beech. 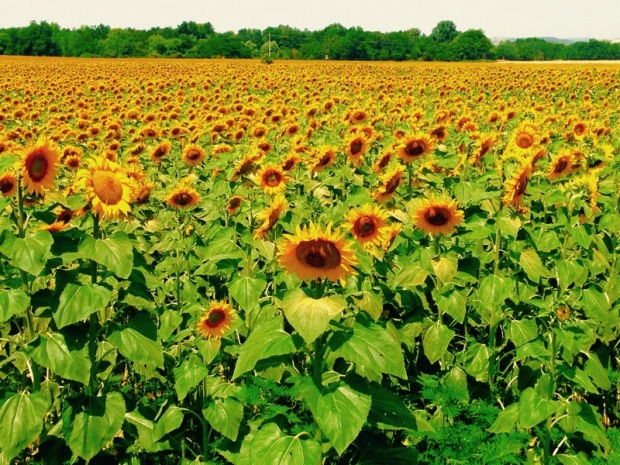 There is still a little forest railway line no longer for transporting the lumber but now people who want to come out into the woods. There is as a stop at the bar we had coffee. 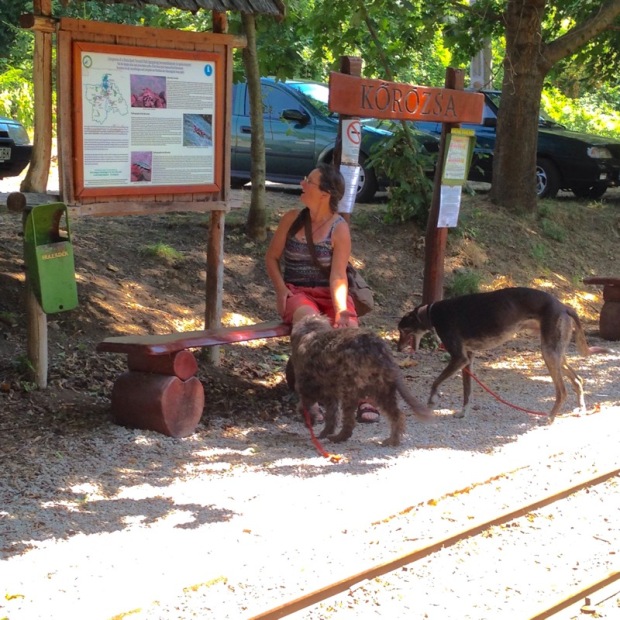 Concerned about the heat we were only delighted to discover an outdoor swimming pool and made the wise decision to hang out there till things cooled off. 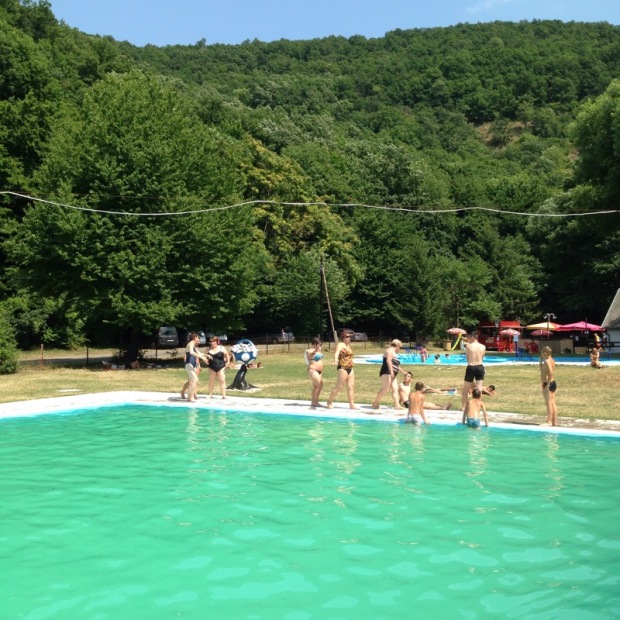 Eventually it did cool off. Cloud was building and we knew a thunderstorm was forecast for later so we headed further into the forest for our walk. On the way we passed 1000s of tons of harvested timber in neat stacks beside the road. I know I’ve gone on about timber a  since Germany but this was unreal. The next couple of hours were like being in the dragons lair filled with gold for someone whose fuel is wood. It turned me giddy and lightheaded to see so much of it.

We passed a nice little spot with a well and picnic tables and benches and a fire pit. And , of course , some timber for the fire!

There were guys in there sawing and stacking and we past their camp.

The skies were darkening and it felt pregnant with rain. The track got rough with machine tracks and the. They were upon us. 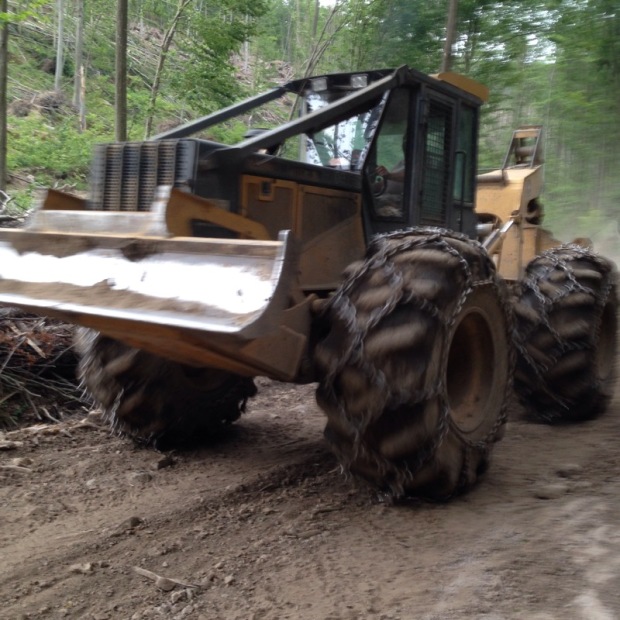 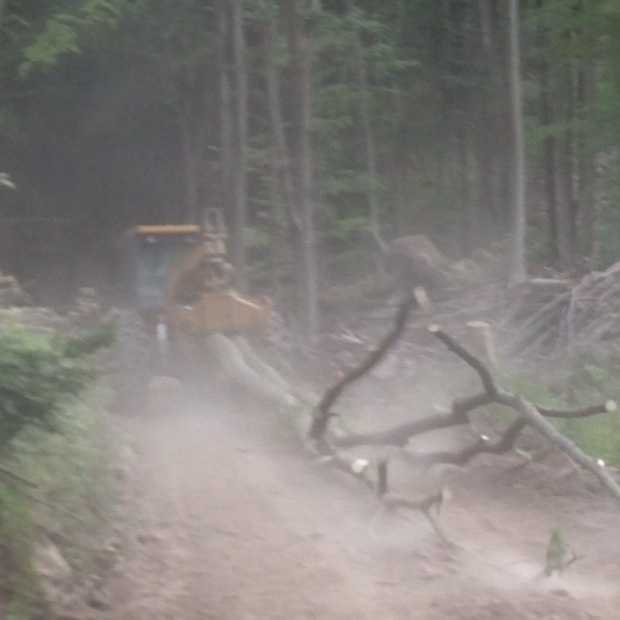 We were in the way.

So with thunder and lightning starting to rumble and flash we returned to the van, arriving as the first fat drops dampened the dusty trail. Time to batten the hatches. We drove a bit further to find a park up and ended up in the shelter of trees beside a sea of timber.