No sooner had I started to settle back into the domestic bliss of homestead living, gathering winter fuel, cutting the grass, and floating in the hot tub than I found myself queuing up for a Ryan air flight from Shannon to Palma.

Abandoning my good wife yet again I took advantage of a wedding invite on Mallorca to reason it made sense to hike all of the Balearics while I was out there. It made even more sense when driving to the airport through squally rain under leaden skies with a promise of 23* awaiting me in Palma.

Sure enough, when the plane doors opened, a familiar blast of heat wave brought grins to passenger faces. Most folk were on a sun holiday to the resorts on the south coast and I joined a bus load to the end of the line at Peguera, where I could start the GR 221. Otherwise known as The Drystone Route this 140 km route makes its way from the southwest corner of the island across the rugged Serra de Tramuntana to finish at Pollenca at north end. From there I intend to get a ferry to Menorca to complete the 190km GR223 which encircles the island before devising a route across ,around or over Ibiza and Formentera.

But one step at a time. In order to fulfill my plans I will not only have to survive the Tramuntana but a three day wedding party at Deia, halfway along the trail.

It was odd to be walking the shorts and sandles filled promenade of Peguera with a full kit rucksack on my back and as soon as I managed to dump it in my cheap and cheerful room I joined the last of the days sunworshippers for a sunset dip.

They were back in force the next morning when, in full hiking gear, I set off from the beach heading inland on the wrong road immediately. Quickly and easily remedied but a reminder to stay focused- it may be a small island but it’s big enough to get very lost in and without my GPS and good maps I need to keep a close eye on my whereabouts.

I was soon away from the resort traffic on a recently created footpath to Es Capdella with views reminiscent of the Camino Mozarabe in March, with white stony land, crumbly holm oak dotted hills and carob, almond and olive trees. 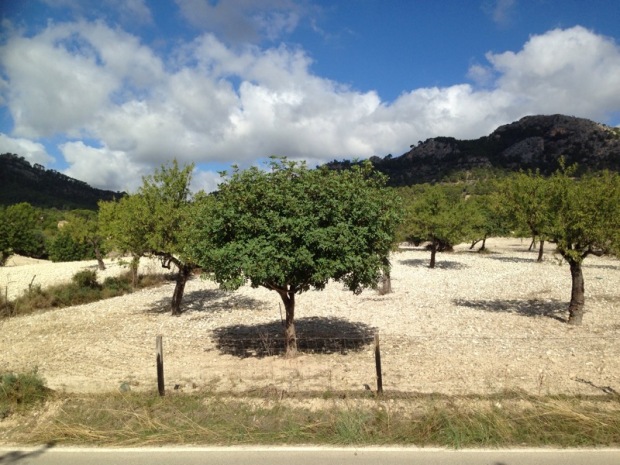 I soon passed by D’en Boira medieval tower house, the first of many structures strongly built to withstand pirate attacks. As I roamed the island of the next couple of days I saw there was a lot of wealth to protect from them.

A Spanish omelette in Es Capdella fortified me for the trek over the mountains towards Estellencs. The first signage for the “drystone route” appeared as did the first wall, although this effort was nothing to the constructions to come.

The limestone also gave up signs of ancient life.

The peak of Galatzo loomed larger as I passed almond groves with earth grazing sheep on my way to the vast Finca Galatzo estate now in state ownership and being restored to its former glory. 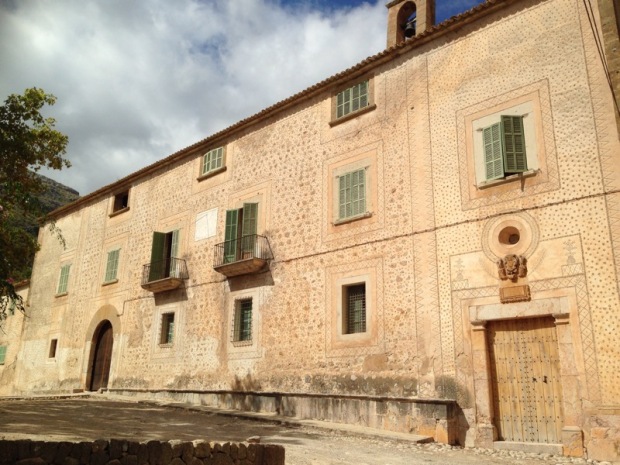 and a collection of old agricultural edifices scattered across the land. Like the old granary for the storage of tithe grain, tax to the church and state. 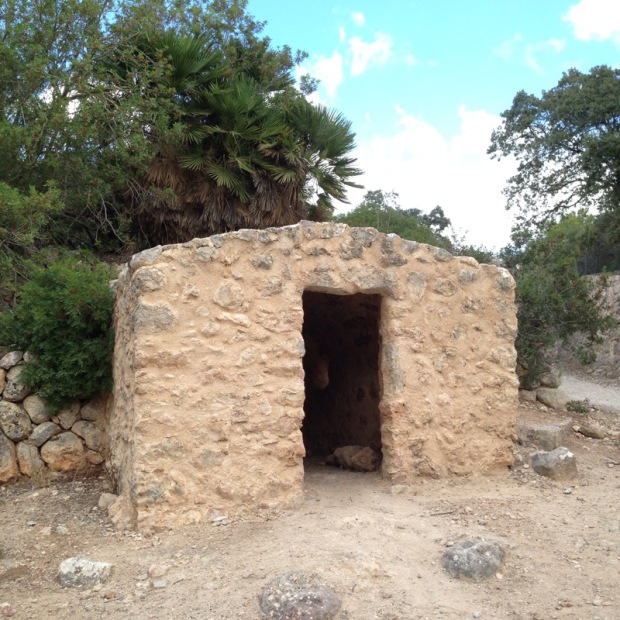 and lime kilns restored and not. 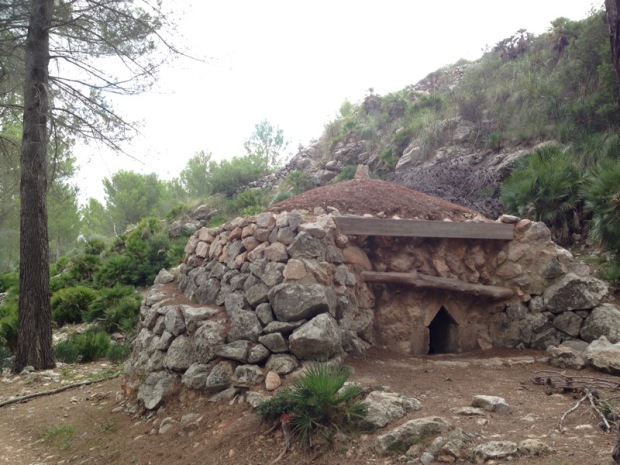 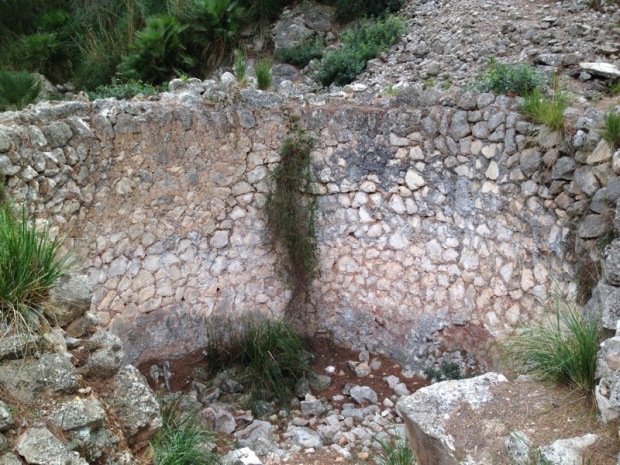 and charcoal burners huts and pits. 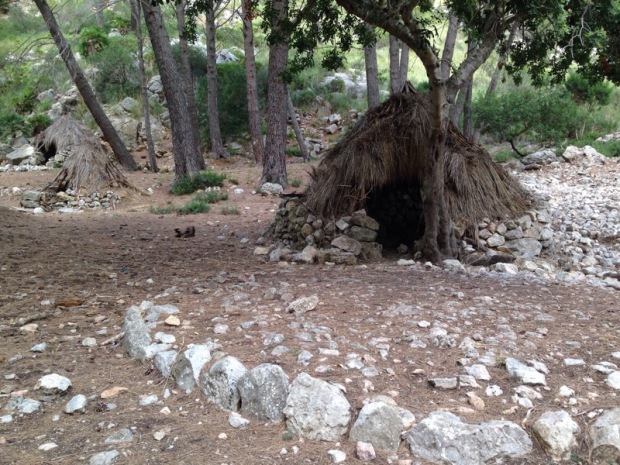 A steep and rugged climb up through the tough and prickly vegetation and then on old cobbles was rewarded by fine views back down the valley to the sea in the distance, a reminder of the journey so far.

until finally climbing through a stile onto the high plateau at about 800m and then heading down with the northwest coast now visible.

A few km further I reach the restored mountain farmhouse of Sa Coma d’en Vidal, all ready to go as a hikers refugio but for some reason stalled a while ago and sitting idle. It was a good place to stay anyway, making my bed in an old lean to shed with a view of the mountains and moon. 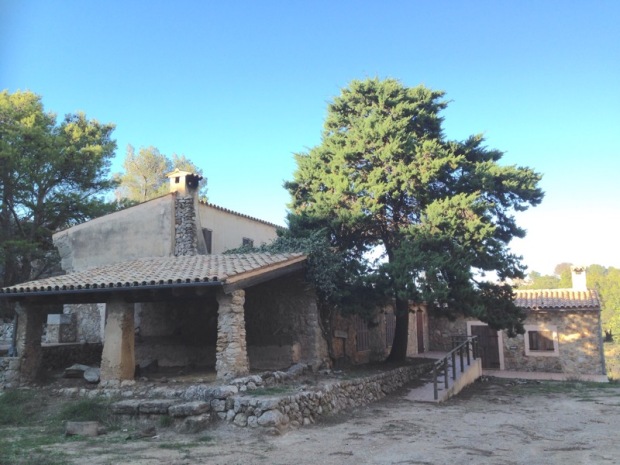 I climbed the rocky hillock beside the Finca to watch the sun set turn the mountains pink and met Tom a young German out on his first long hike and finding it tough going.

In the night I heard some strange animal cries that could have been this critter that I later saw a warning poster for. 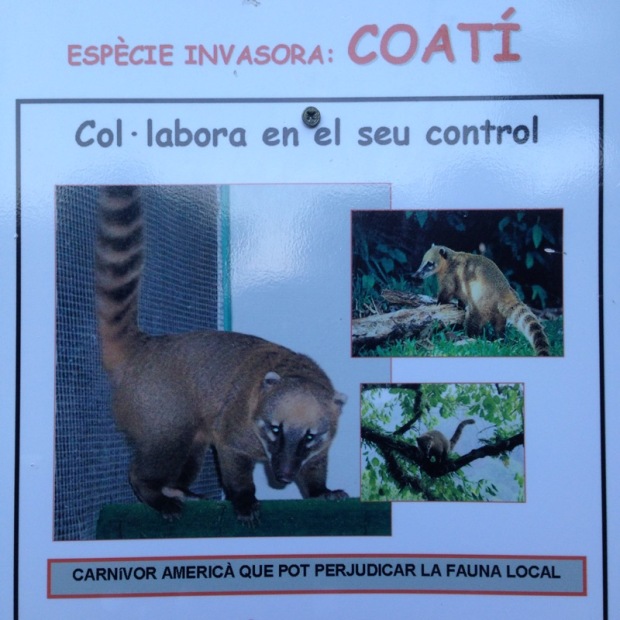 Tom had gone in the morning by the time I had done my ablusions with the help of the well, a weight and a plastic bottle, but I met him again on the outskirts of the village of Estellencs below near the coast. 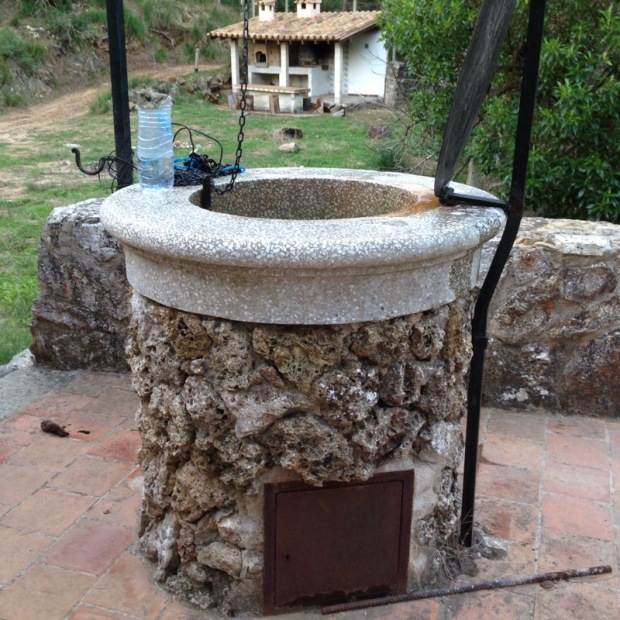 The original GR 221 route had been blocked by a landowner some time ago and now the official route goes along the coast road for quite a way. To avoid the road an alternative is used heading through higher ground and we used that.

Passing more lavish houses and estates it seemed that the cheap and boozy resorts of the south Coast were from a different planet. 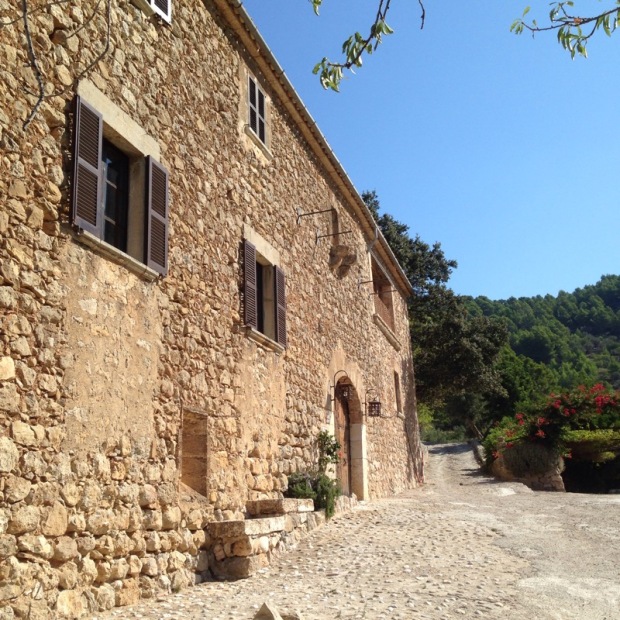 The government has bought the massive Planicia estate that we eventually, and by separate routes, found our way to.

From there a cairn marked trail led up into woods of holm oak and arbutus that reminded me of the cloud forest of the western canaries.

Another fine old Finca at S’Arbossar

was followed by the Cami des Correu, a fine ancient cobbled highway through the woods at times with massive walls alongside. 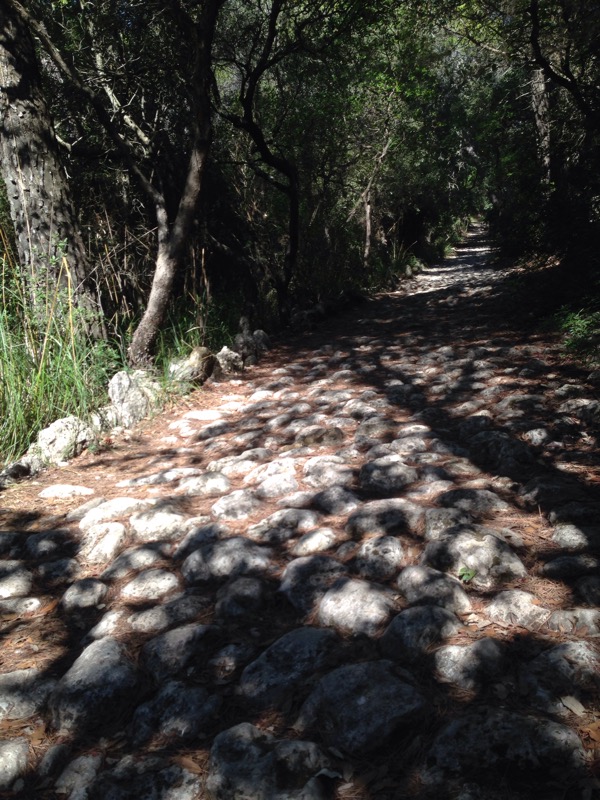 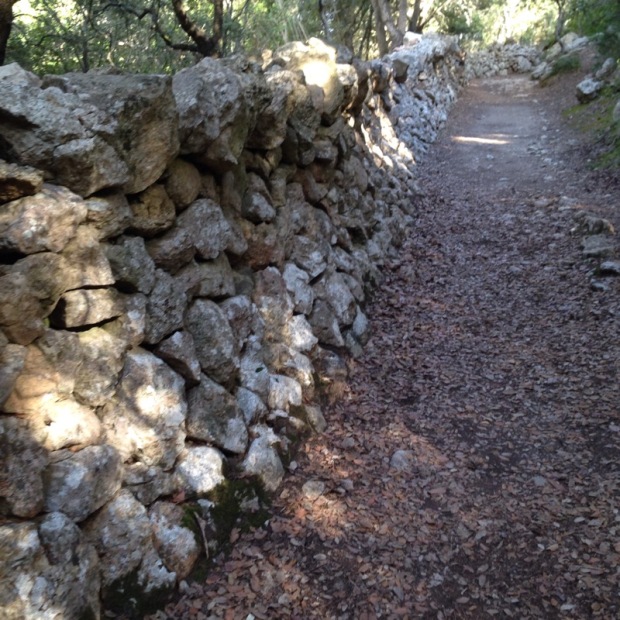 Hoping for a filling meal and a few beers I headed for La Granja, another big estate on route but although a lovely place with many interesting things in its museum the prices in the cafe/restaurant matched the general ambiance of high class and was no place for me and my sweat drenched clothing and odourous presence.

So I carried on to the town of Esporles, got some crisps, bread and tuna, said farewell to Tom and sat on a park bench drinking cold cans. Proper job.