Somebody asked me to write about what i was thinking about on the trail.

I thought about that……..

For some reason that reminds me of the old Bob Monkhouse gag:  “they laughed when I said I’d be a comedian,  they’re not laughing now”

In fact my thought processes whilst hiking are pretty indescribable. They can come quick and sharp or slowly swirl around. Some themes come and go like a rising and ebbing tide. The subject can be anything , everything or quite often, nothing. To start the day it’s normally functional stuff, kit check, how far, how long,how many, what ifs and buts. Then, brain awake, I’m taking in all the new surroundings as I move   off into unknown territory. After that anything goes until I’ve really settled into a long rhythmic hike. Then it’s pretty much shut down, thoughts a reaction to outside stimuli. A smell, birdsong, colour of flower, fall of light- whatever.

But you have to keep a bit of brain fully functional – or you get lost.

Yesterday I left my camp on abandoned and overgrown olive terraces on the outskirts of Espores and headed into the high hills again. I’d had a bit of a broken night, first having to get into my mozzy net tent after a couple of hours of buzzing and then, feeling drops of rain on my face , having to stumble about naked trying to get the fly sheet up and peg it into rock. Ah, the camping life.

A couple of 100m up the track I came upon this sign, which could have saved some ” carry on camping” style capers.

Then it was up past more massive estates

to a coll and up into the holm oak and limestone. Like hiking the Burren at home

including the “get off my land signs”

and with better views? 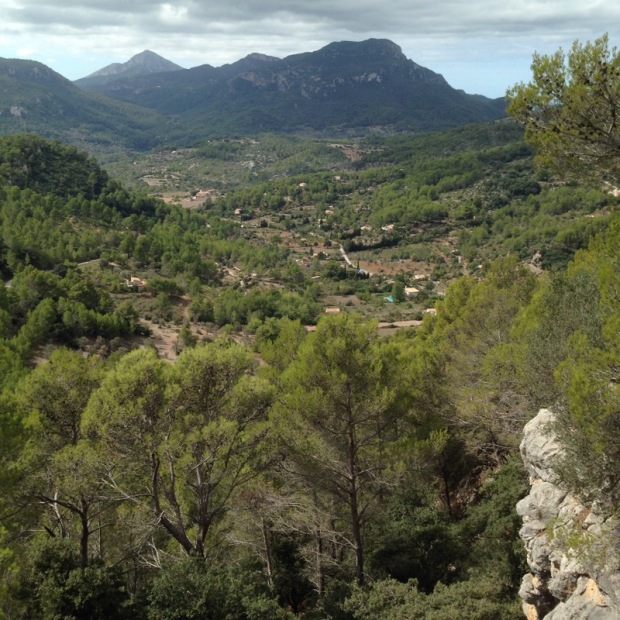 For centuries there has been a thriving charcoal industry going on in these forests and they are thick with the remains. Sometimes a bit of funky” recreation” 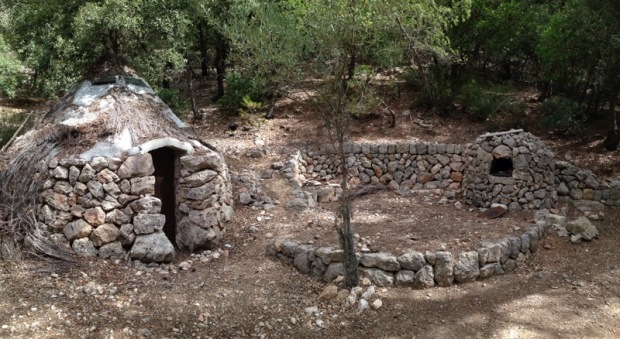 but mostly just quiet reminders of another time when the hills were alive with charcoal and lime makers, building their huts and bread ovens and living with their families on site from spring to autumn. On the high mountains the snow collectors came to make ice in the winter in huge underground stone pits. There are also remains of amazingly constructed water storage tanks and underground reservoirs. They had a lot of material. 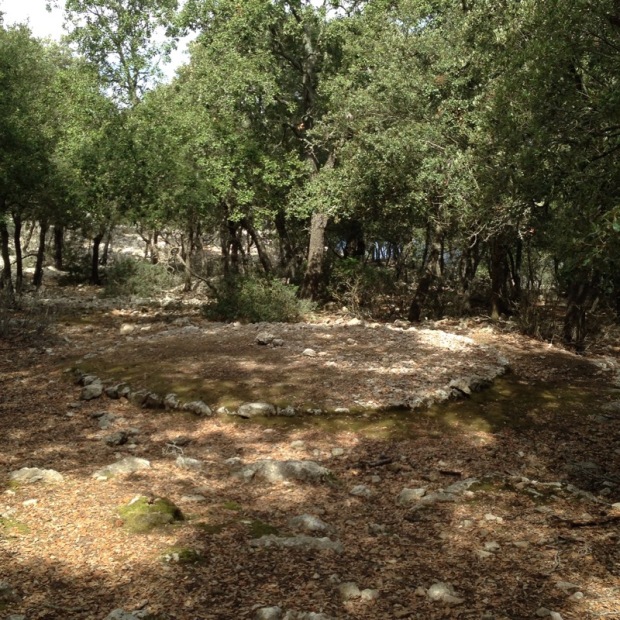 There has been no signing of the way, only following little occasional stone cairns, which were not easy to find amongst all the stone! I came across a couple of ladies lost in the woods, set them straight and then got lost myself. The tops of the hills gave good views.

and we’re dotted with the strange structures of the Thrush hunters. 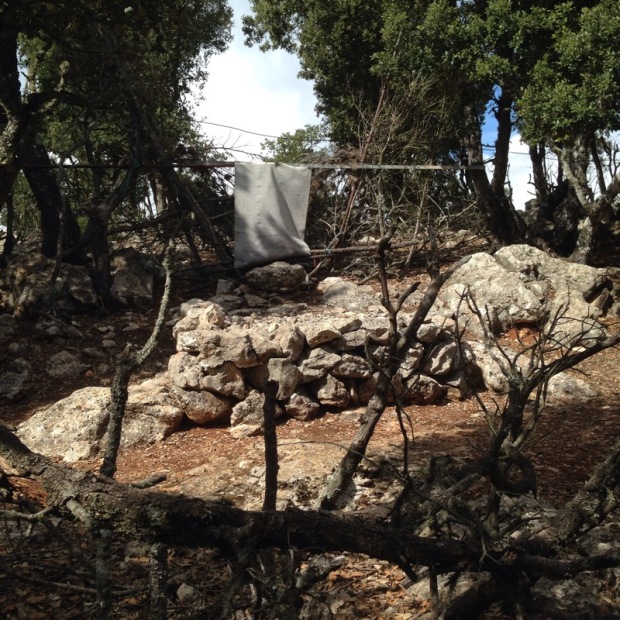 I don’t know what they do but I don’t like it. Just before emerging from the woods I stumbled ( nearly into) this handsome cistern.

The town below, Valldemossa, has a very extensive monastery 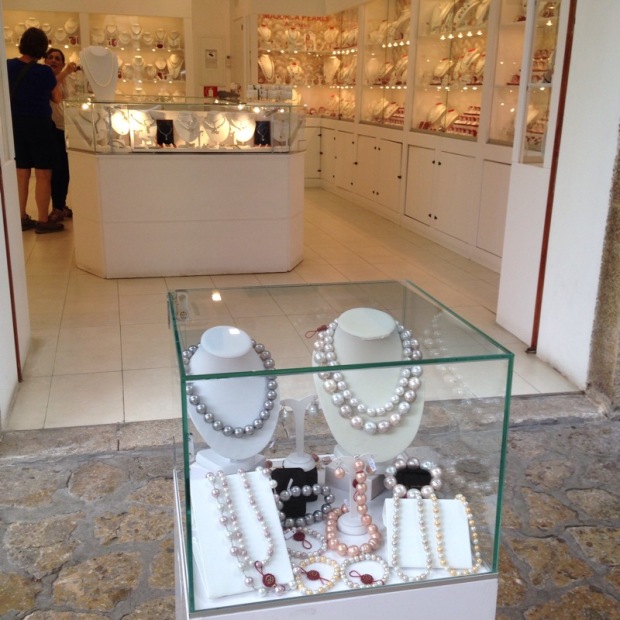 No place for me. But looking for my way out of town, a dilemma. My guidebook says left- new , and very rare, sign says right.

Hoping to avoid another barred path I went right, hoping for a continuation of signs now I was without a guide.

No such luck. I was led miles away to a government owned public Finca

and proceeded to climb to nearly 900m only hoping I would find my way in the morning. As it started to get dark I finally found the refugio that had been signed, without a distance, back in the town 2 or more hours before. All locked up but with a lean to

Exhaustion provided a good nights sleep although ,DISASTER, my trusty inflatable pillow died after so many hikes together over the years.

In the morning I climbed up to the ridge on a beautiful well made track.

I was hoping this was the Cami de s’Arxiduc, the Archduke’s Path, constructed across the tops of these mountains as a carriage ride. I was supposed to be coming along it from the other end and had to look out for cairns that marked the ONLY SAFE WAY down the mighty cliffs to Deia way way below. 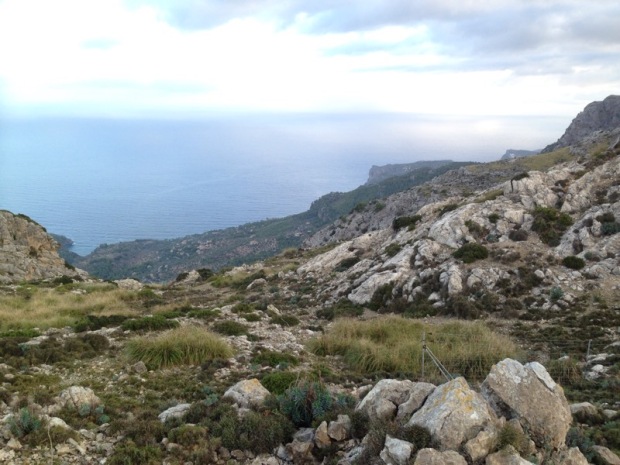 I couldn’t find the cairn.

Up and down, backwards and forwards, never again will I be without my GPS and good maps. I found another hiker, also without a map, who led me the wrong way before finally coming across another hiker who knew his way around and had a map who sent me back again, until finally I found the marker and could start the descent. 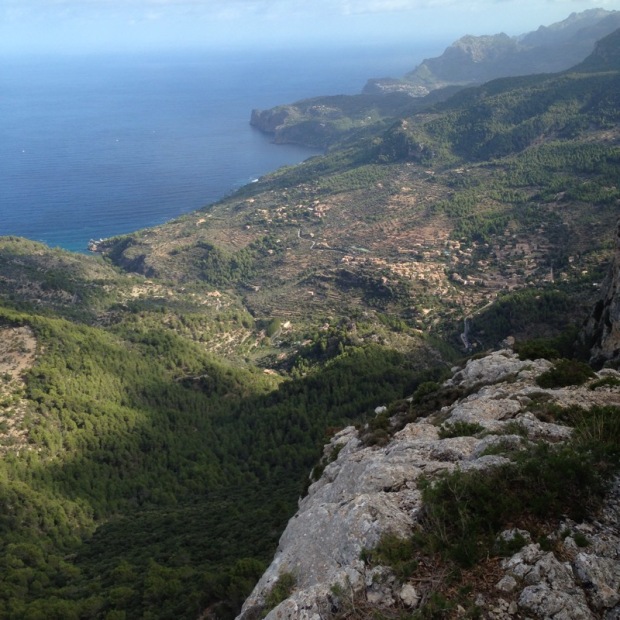 It was a long way down. It ended on ancient terraces long deserted with generations of work in the walls. There was a exquisitely crafted tunnel about 10m long under a terrace with a clear full well at the end. 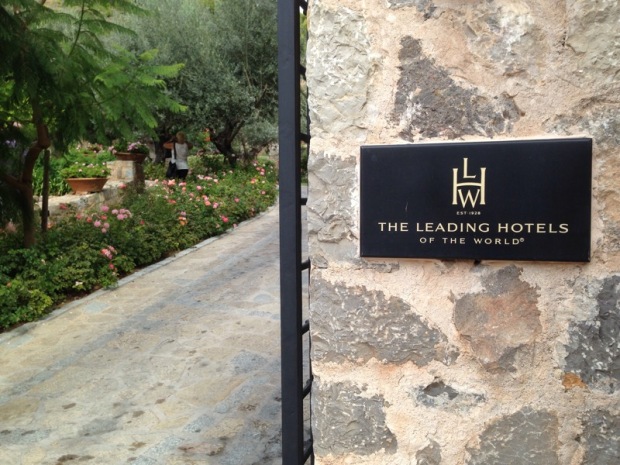 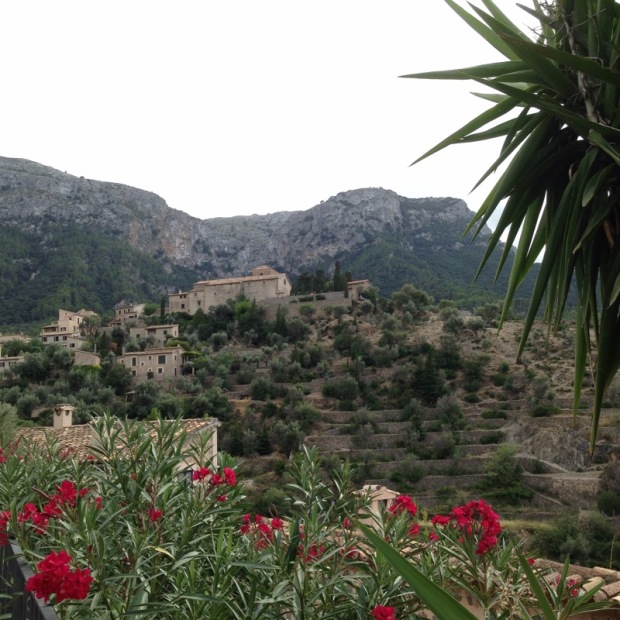 It means that my refugio is equally classy and even has a little museum attached. 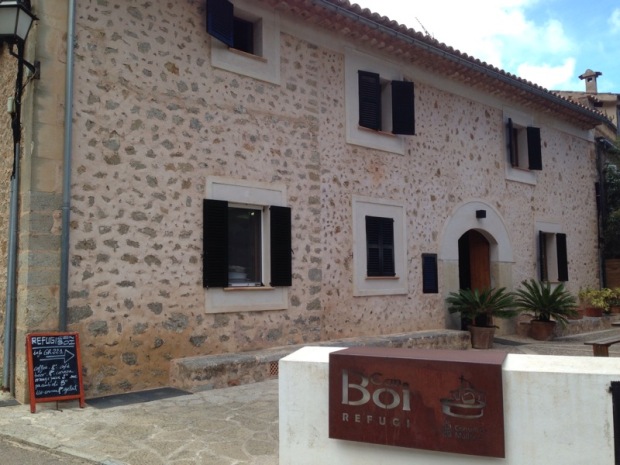 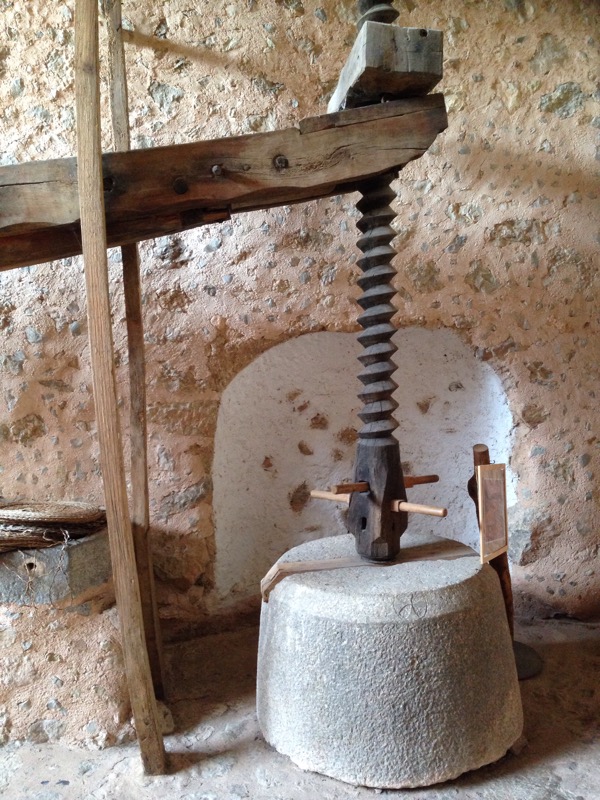 I’m having dinner here and notice there’s a bottle of wine on my place, I’m sleeping in a soft bed with a pillow, and I’m not walking for three days because the wedding starts tomorrow. Let the good times roll.