Another short foray into the world beyond our smallholding acres and the wilder side of nature, walking rather than weeding.

We wanted to hike in the Twelve Bens, the peaks that dominate western Co. Galway alongside the Maumturks, and we wanted to do it with our dogs. Dogs not normally being welcome in sheep country that meant staying within the National Park boundaries where there is a policy of allowing “dogs under control” which is a loose enough term to let our very well behaved and controlled dogs off their leads if there no animals about.

We had hiked from the visitor centre in Letterfrack a couple of times and although very nice, we wanted something a bit more rugged and demanding than the well laid out and marked walkways around Diamond Hill, and a bit less busy than the gift shop and cafe.

So we headed for the southern end of the Park, turning north off the Clifton road by Ballynahinch lake and making for a forestry track a couple of kms in just after crossing the Owengin river. The approach provided a fine vista of the valley leading in towards the peaks rising up from the bog and forest with the highest of them all , Benbaun at 729m, at the back of the horseshoe. 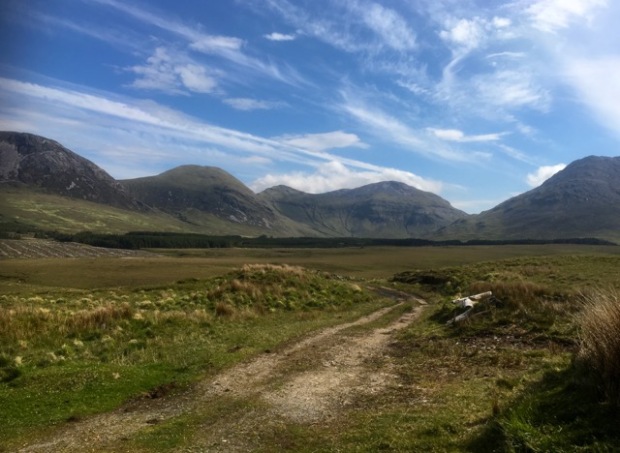 We had to cross the river again, on foot this time, on a well made ford built to accommodate the forestry lorries bringing out all the timber being harvested deep in the valley. 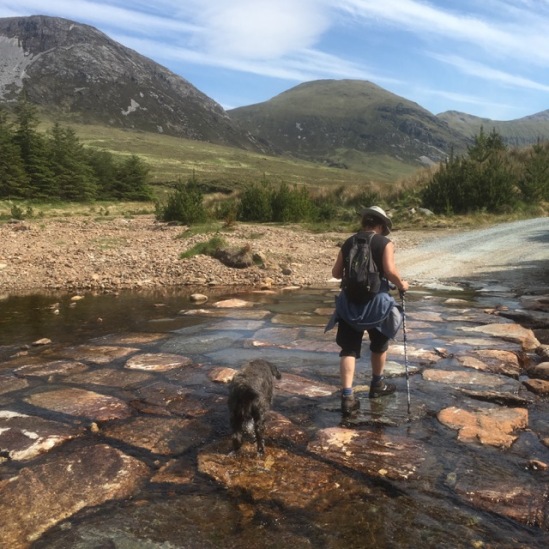 The Park boundary started here and a stile had been placed to provide access. It was unnecessary however as the fence was down due to some severe flooding by the look of it.

There were two rounded peaks to the north of us, Bencullagh and Muckanaght, and we planned on climbing up the ravine to the shoulder between them and then going up the ridge to the summit of the higher Muckanaght at 654m.We calculated a 5 hour return journey with rest stops to complete the 10km +. The going was fairly rough but not too wet thanks to the prolonged dry spell we had been enjoying unlike the rest of Europe. 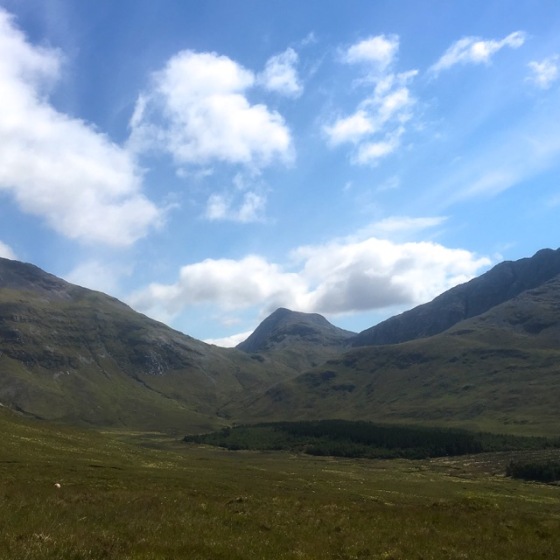 As we clambered higher the little cottage that must have been one of the most isolated in the country came into view at the edge of the plantation below. I had spotted it on a previous trip from the flanks of Benbreen while completing the wonderful Glencoaghan horseshoe, possibly the finest hike in the land. I had wondered then at the lonely lifestyle of those living so far from “civilisation” and determined to visit it one day. We decided to do so on our return from Muckanaght. 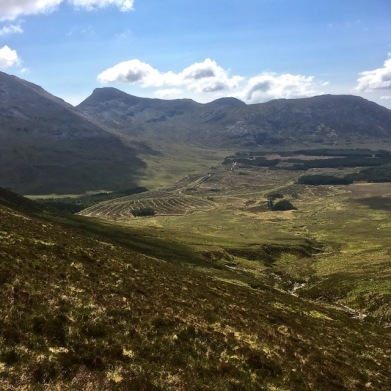 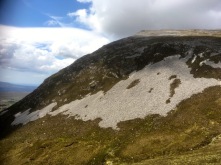 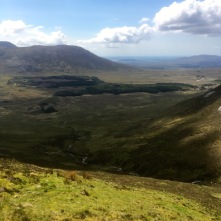 The final stretch to the saddle and steep climb up the ridge to the summit was hard going but the weather couldn’t have been better and we were rewarded with fantastic views over the park towards the sea beyond Letterfrack and to the east the vast array of the Twelve Bens. Time to relax and have our picnic lunch while soaking up the surroundings and matching them to the map, or just having a snooze. 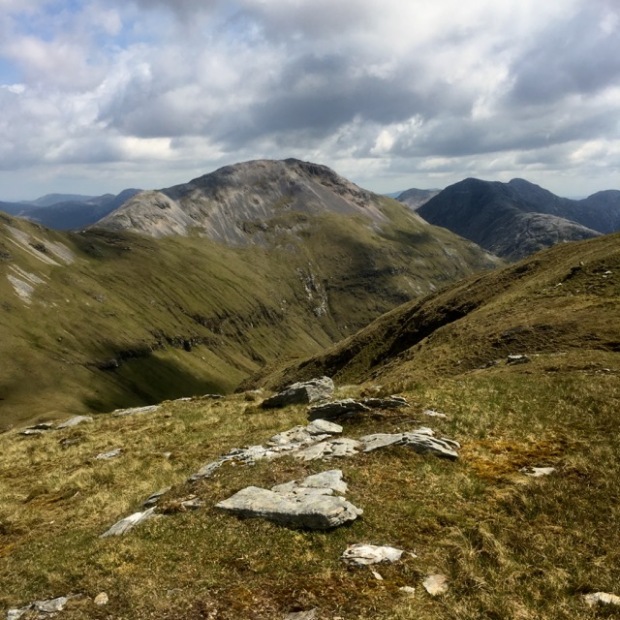 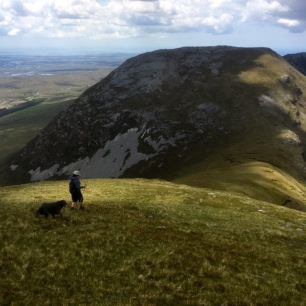 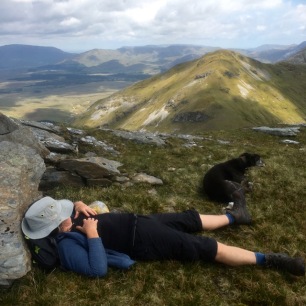 The way back down was easier, and quicker, with Sally deciding to save her knees and slide on her bum, thankfully missing rocks and the iridescent green boggy bits, one of which had a resident newt. 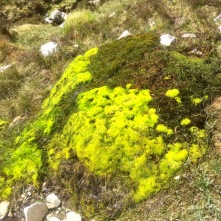 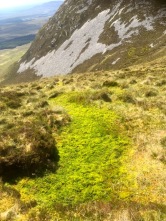 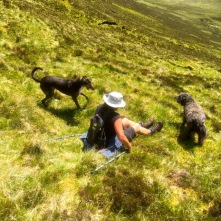 Soon enough we were approaching the old homestead across the tussocky grass and were greeted by a sad reminder of the farming days of yore. An exploration of the building found that it had become home to sheep alone but had obviously been used as shelter for hikers in the hills. 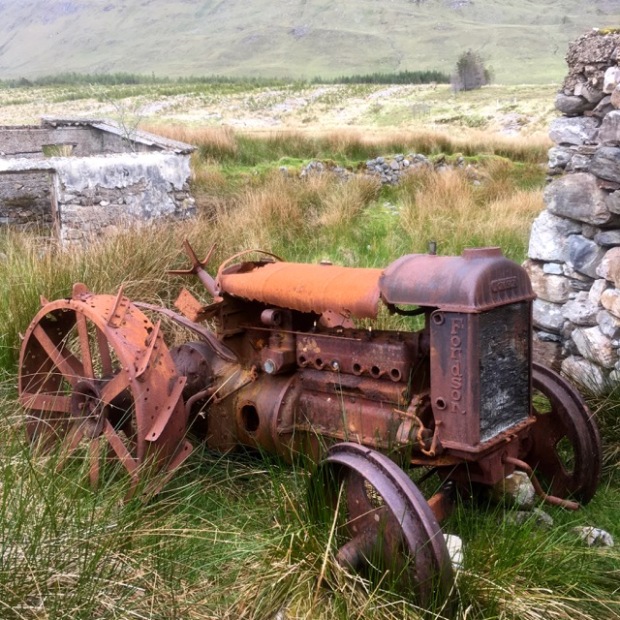 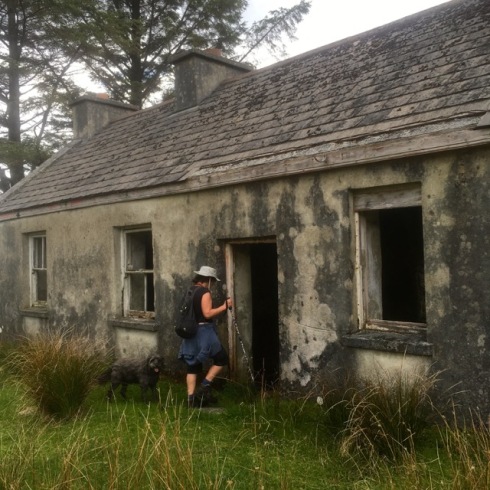 There was now no discernible track out of the place so we roughly followed the winding river back to the ford and along the forest track to our trusty Tranny, with the gift of a new bonnet mascot to protect us on our continuing journey through the Wild West. 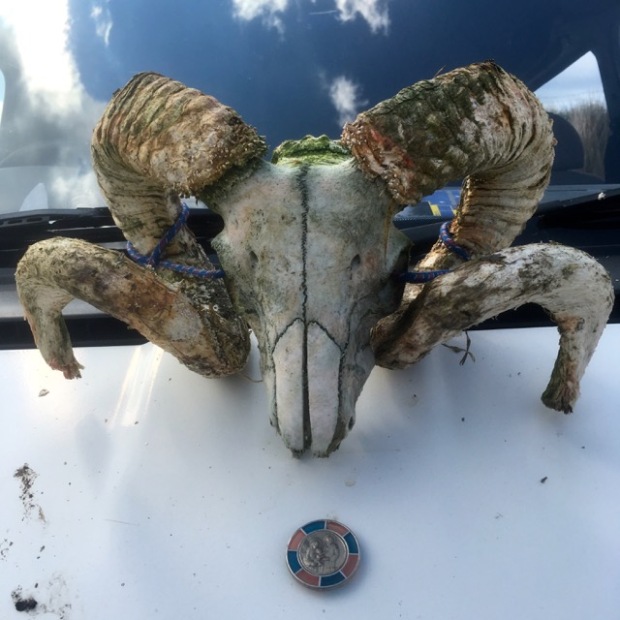