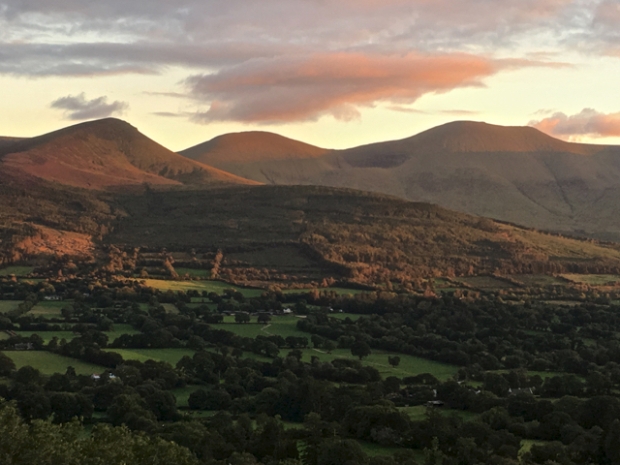 I first climbed Galtymore, at 919m the highest peak in the Galtees, nearly 40 years ago whilst tackling all of Irelands 3000 footers with my old chum Phillip who has long since passed away. I have thought of him on my other visits to the area but have always been thwarted in efforts to climb again in the deeply folded hills by the fact that I’ve been accompanied by unwelcome dogs- forced back by insistent signage and unwilling to incur the wrath of an irate sheep farmer.

But now our dogs have also passed away and Sally and I returned to hike unheeded, parking up the night before under the protection of the famous statue of Christ the King, his hand raised “in blessing the Glen, its people and all those who pass by”. 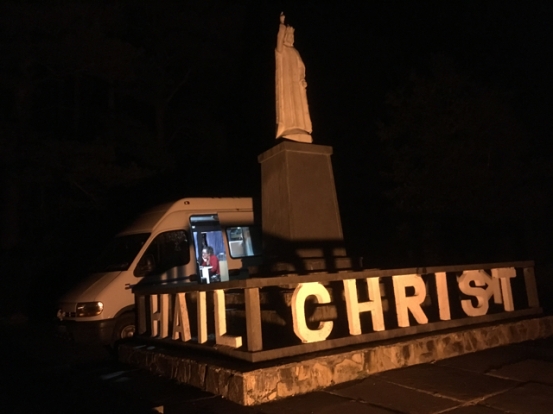 The glen being blessed is the beautiful Glen of Aherlow, running east/west below Tipperary on the north side of the Galtees, the highest inland mountain range in Ireland.

It looked fine in the morning light as I surveyed peaks and valleys and tried to follow the route we would take to Lough Muskry, the largest of the 5 glacial cirques lakes on the northern slopes of the Galtees. From there our 14km hike would take us up to the ridge above before circling around to the east crossing Greenane peak at over 800m before looping back down to the valley floor. Ground out of the mountain by rock and ice 25,000 years ago the 20 acre lake is over 100ft deep and a major source of water for the area.

On our way from Christ the King to our starting point we called in to Clonbeg ,where St Sedna’s holy well and rag tree rest quietly beside the ruins of a medieval church in the grounds of the Church of Ireland chapel built as the Massey family memorial. The churchyard contains the graves of both catholic and protestant and has a tranquil and timeless vibe about it.

I cleared the pondweed and had a sip of water to fortify me for the hike. The story goes that 3 local men off to the Crimean war visited St Sedna’s  well before heading off and their safe return was attributed to the miraculous powers of the waters.

Healed, guided, protected and guarded by St Sedna we drove to the trailhead, (truth be told, after getting lost) and started up the forest track from the empty car park. We were the first onto the hills on this fine sunny weekend morning.

The track followed a rushing stream up a long valley as we slowly rose to the forest boundary and the open mountainside. The formidable cliffs above Lough Muskry came into view as we continued up a grassy path alongside the sheep.

Looking back northwards the rich and fertile Tipperary farmland lay like a green blanket to the horizon. We climbed steeper now, across the eastern slopes of Knockastackeen, forded a stream and reached a point above the still and dark waters of the lake. Originally known as Lough Beal Sead, the Lake of the Jewel Mouth, it was the dwelling place of 150 comely maidens who would be transformed into birds every second year, one of whom became The Most Beautiful Bird in the World and was allowed to wear a necklace containing the sparkling Jewel of Beal Sead.

We were now at about 500m and had a very steep climb up the grassy slope beside the cliffs to an unnamed peak at 785m where we turned east towards the jumble of conglomerate rocks known as O’Loughnan’s Castle standing atop the ridge. These and other nearby rocky outcrops are former nunataks, the bits of rock that poked out above the glaciers. 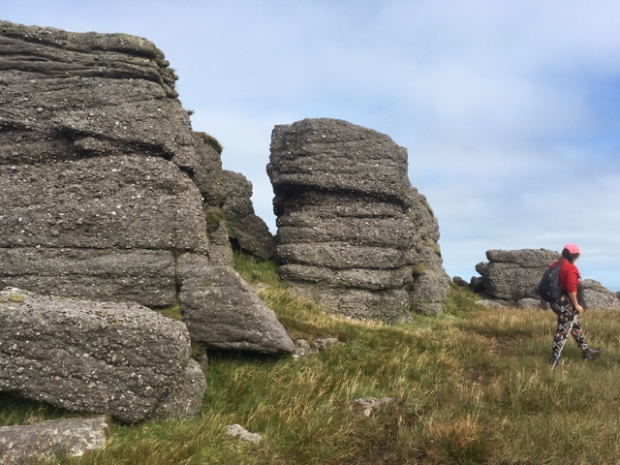 Crossing the broad peaty col through some peat hags we climbed the long and gradual slope to the trig point on the flattened summit of Greenane. The wonderful view from there was not only of the whole Galtees but also the Comeraghs and Knockmealdowns to the south and east and the Slieve Felims and Silvermines to the north as well as pale ranges in counties Clare, Limerick, Kerry, Galway, Offaly, Waterford and Cork. I was also sure I could see the sea around Dungarvan through a gap in the mountains. Greenane means ” sunny spot” and so it was, enjoying our sarnies and feasting on the view.

After a chat with the fit fellow we’d seen racing up the slope behind us we headed off down the ridge to a lower peak “Farbreaga”- False Man, from the pile of rocks at the summit that supposedly looks like a man from afar. The rocks could be the scattered remains of a booley house- a stone shelter used by farmers until the 1850’s when grazing cattle high on the mountains in the summer months.

We turned off the ridge and descended through the maze of eroded peat hags enjoying spectacular views of Muskry and the cliffs. 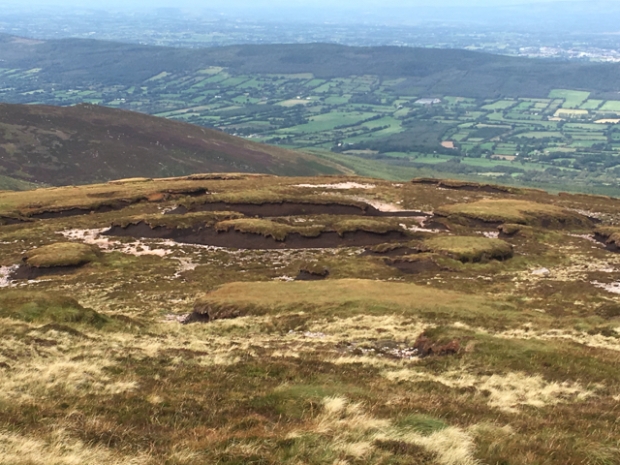 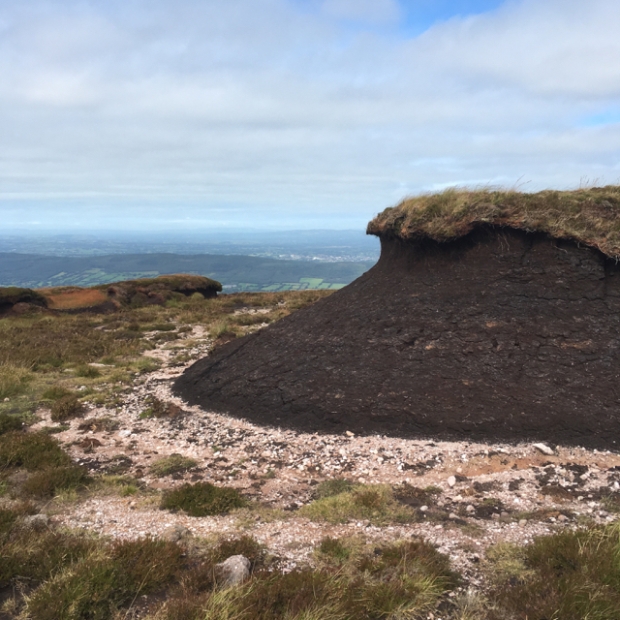 With our eye on the forest entrance we had left in the morning we clambered down the tussocky slopes to reach the rushing stream, its tumbling waters twinkling in the sunshine. 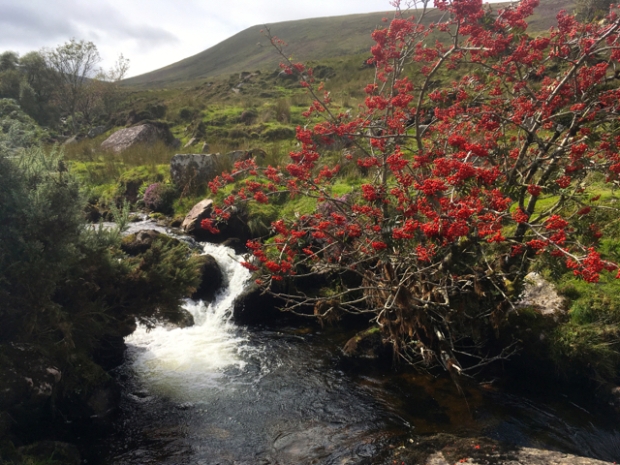 It had been a fine hike and we determined to return again, realising in was as near to us as the more frequently visited Connemara. There were more people about now heading up into the hills for a post sunday lunch walk but by the look of the sky we’d had the best of the day and it was time to have a quick hidden skinny dip in the chilly waters before rejoining the forest track back to the now full carpark before the rain arrived.