On a gorgeous autumnal weekend we returned to West Cork on a visit, staying with a friend on the narrow finger of rocky land that points out into  the Atlantic between the Mizen and Beara peninsulas. With Dunmanus bay to the south and Bantry bay to the north there is usually a stunning sea view to admire from the network of way marked walking routes that the Sheeps Head is blessed with.

Anyone living around the area is really spoilt for choice when looking for a wild and open hiking route. Not only is there the long distance (175km) Sheeps Head Way that circles the entire peninsular and now continues, via Bantry to Drimoleague and Kealkil, but there about 20 other loops and linear spurs that criss cross north and south, of varying distances . We only had time for a couple of loops but are determined to return.

The logo for the Way features two rams with interlocking horns and is taken from some 6th century carvings on a standing stone near Bantry. They are supposed to illustrate the Gospel story of the people of Gidgeon and the Israelites who fought for many years. No-one won, no-one surrendered- they accepted to live together. So the interlocking rams symbolise togetherness and resilience. The route was opened by the then President Mary Robinson in 1996 and has since won awards and been chosen as best Irish Walk by Country Walking magazine.

We headed down in the camper to the end of the road on our first evening to do the Lighthouse loop before the sun sank into the sea. Listed on the Irishtrails website as moderate/difficult the 4km route was supposed to take 2 hours but we found it easy enough though rugged in places which made it interesting. Starting off from the charming carpark cafe the Cuppa Tae ” the tea shop at the end of the world” we set off north to loop anticlockwise.

A narrow rocky path led us steeply down into a little valley towards the deep blue sea and the mountains of the Beara. In such a remote spot we were surprised to pass the remaining stone walls of a simple dwelling.

We continued on over marshy hollows and rocky outcrops to where our loop joined the Sheeps Head Way proper and turned west along a narrow undulating cliff top path .

The bays both north and south of us are thankfully free of the jarring fish farm nets and mussel rafts that blight so many other once pristine seascapes off the coast of western Ireland. Seamus Heaney wrote a poem about here called “The Peninsular” whose last lines describe this end of the world well. “Water and ground in their extremity”

We puzzled over the enigmatic circle of white stones before spying the tiny lighthouse below us and realising its function as a rustic helipad. The small white building clinging tightly to the rocks at the grounds extremity is not very old. Built in 1968 to guide tankers to the ill-fated oil terminal on Whiddy Island off Bantry, its light is visible for 18 miles across the often ferociously turbulent waters.

The primitive helipad must have been a busy spot during the construction when 25o helicopter flights were needed to transport all the materials including the lantern and optics from Kilcrohane 9km away. They also had to fly out all the poles needed to bring out the electricity to power the light.

Gazing out west from the rocks above the lighthouse we weren’t lucky enough to spot one of the whales or dolphins that regularly appear on their migrations and so turned onto the now well worn and larger path back towards the car park passing some dramatic cliffs and then the still waters of Lough Akeen, where the surrounding fields still bore the memories of long gone residents in the form of the potato ridges, clearly visible in the slanting evening light. 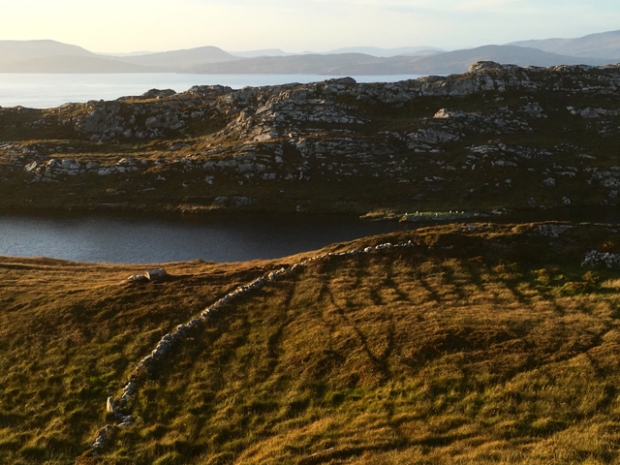 The stony path filled with sheep that scattered into the heathery grass as we slowly climbed up past the outlying farmhouses to the sadly closed “Cuppan Tae”.

The following day we were blessed with more beautiful weather as we set off on another, longer loop walk. The Seefin loop is 13km and climbs to the highest point on the peninsular at 318m. The route includes a bit of quiet backroad, ancient old boreens, field paths and open and heathery hillsides. We would be hiking down the rocky old red sandstone ridge of what author, musician and walker Mike Harding described as ” the most beautiful landscape in Ireland”. Praise indeed!

Setting off from Ahakista on a typical tranquil West Cork backroad lined with fuchsia we followed the stream passed the old burial ground, and leaving the tarmac behind, began to climb a boreen between the field hedges. 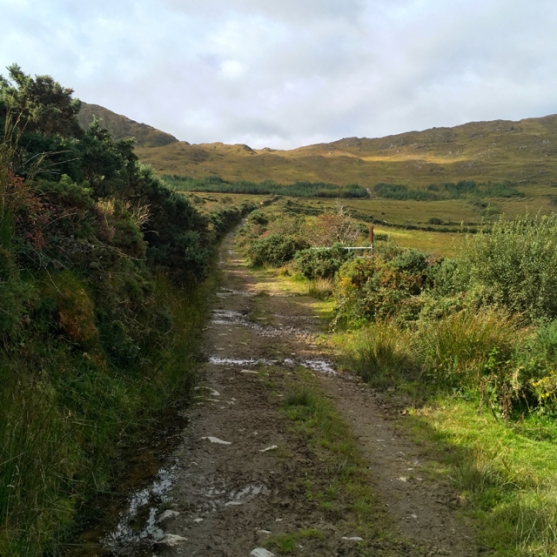 Once out on the open hillside we followed the marker posts up the flank of Rosskerrig to Windy Gap as the vistas grew ever more impressive, with the sea views on both sides.

At a meeting of routes we turned towards the Sheeps Head peak glorying in the sunshine. This area is blessed with perhaps the mildest climate in Ireland due to the warming effect of the Gulf stream that washes this coastline. 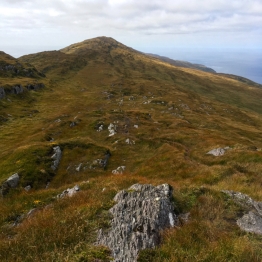 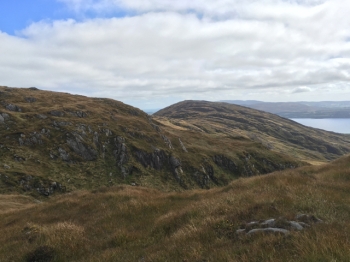 Ground down over countless millennia the skeletal bones of this landscape show through the thin covering of rough grasses. We spotted many sticky sundew plants hiding in the turves awaiting their insect dinners. It was a fairly steep descent from the trig point on Seefin, heading south with marvellous views to the Mizen Head and Mount Gabriel with Cape Clear and the other islands of Roaring Water Bay faint in the distance. 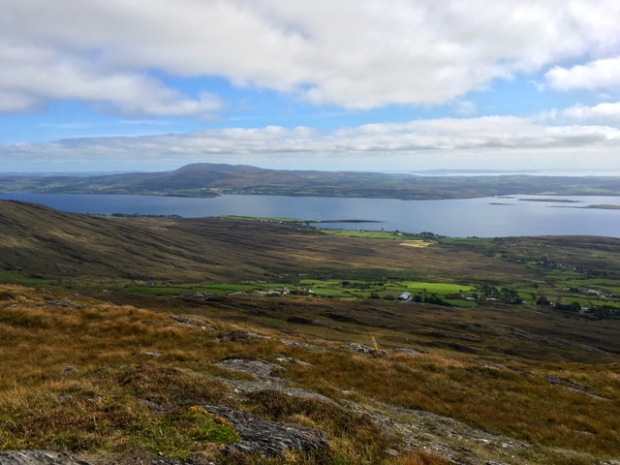 Before long we had reached the highest farmyard on the slopes and crossing it, we carried on down an old Mass Path over a little bridge to reach the original Ahakista road now a charming 3km green lane complete with a stone seat to rest awhile. 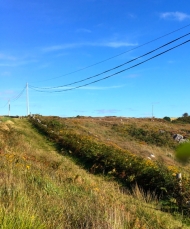 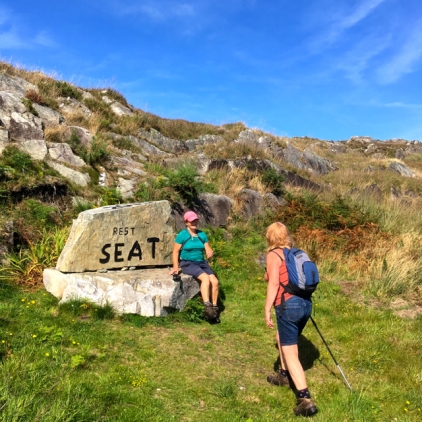 On reaching tarmac again we turned to cross an impressive stone slab bridge spanning a stream to reach one of west corks many stone circles. This one was cleared of thick vegetation on rediscovery in 1995. 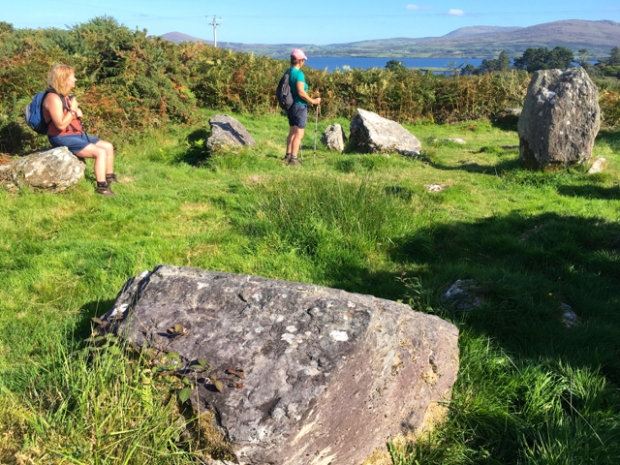 A short distance through the bracken, heather and gorse and we were back at the fuchsia lined lane and our car. A pint in the waters edge garden of Arundels by the Pier completed a memorable West Cork ramble.

While I’m here at my blogging spot i’ll just do a brief post on my last hike, a 13km Burren ridge walk from the bottom of Abbey Hill to the top of Slieve Carron. 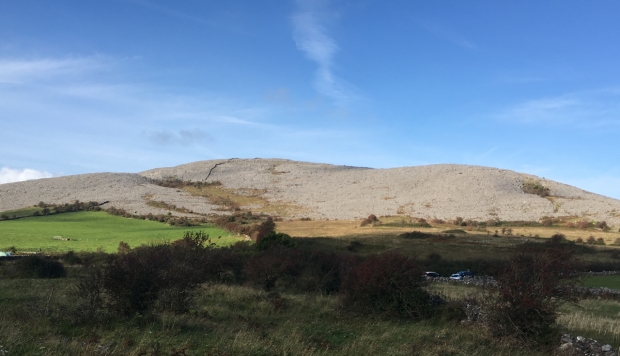 Parking at the end of the grassy unpaved road that traverses the lower slopes of Abbey Hill I started across the narrow strip of grassland that borders the naked limestone whose shelves of rock reached up towards my first summit on Oughtmama. I followed the stone wall that separated counties Clare and Galway, the views of Kinvara Bay and the Gort lowlands a colourful and fertile contrast to the stark bare hillsides above me.

A flatish stretch before the peak was followed by views down the wild and lonely valley that contains the remains of the 3 Ucht Mama churches, long roofless and abandoned. 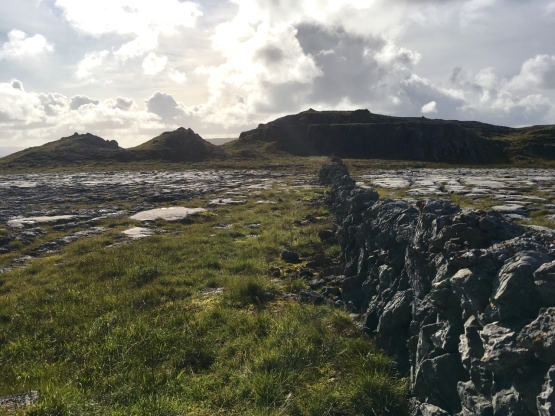 From here, over Turlough Hill and on towards Mt Carron, I was deeply immersed in the glaciologist-karst landscape, the only sounds the clinking and clanking of the loose rocks I strode over as I crossed the slabs and cracks of the clinks and grikes. A powerful and unearthly world with so many contrasts and contradictions. Seemingly a sterile desert- so rich in flora. Seemingly so empty of human life- containing a wealth of the ghosts of settlement through the ages. Huge areas of bare grey rock-alongside fertile fields of vivid emerald green. 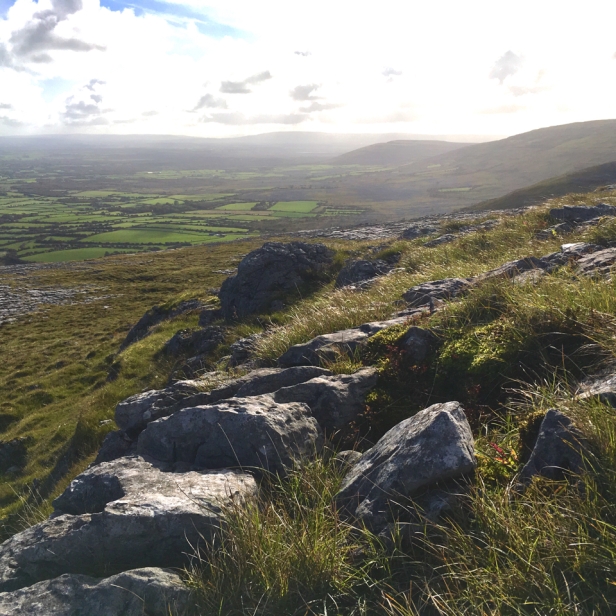 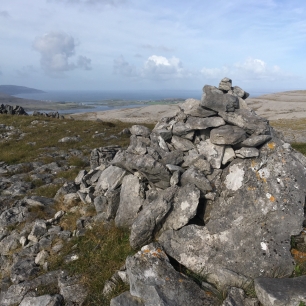 Revelling in the “natural” world I had to remind myself that it all displayed the hand of man. The bare hills- denuded of trees by neolithic farmers, the massive man hours involved in the stone wall building and the sacred sites and defendable spaces of the burial cairns and hill forts. 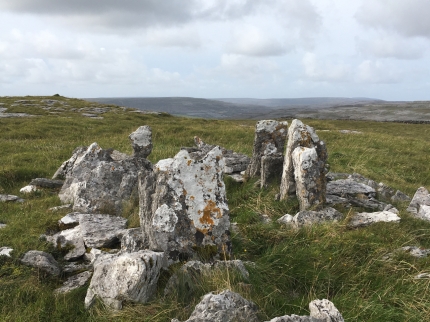 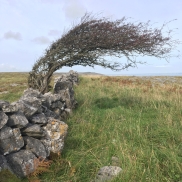 Atop the huge burial cairn on the summit of Slieve Carron , yet to be excavated, I pondered all those passed lives , including that of a close friend whose memorial site was just below me, and felt deep gratitude that I also lived a life amongst these surroundings.