For forty years we’ve been thinking how wonderful it would be to travel to rural Japan. Back then we were macrobiotic , a belief system that came out of the countries Taoist leanings, and at that time had a big reliance on traditional Japanese foods. Our fantasies of visiting miso, tofu and tempeh kitchens and studying the seaweed farms were economically out of reach and eventually the macrobiotics faded with the travel dreams.

Later I got into hiking. I had a special fondness for pilgrimages and nearly 15 years ago I walked the 880km Camino Frances to Santiago and on to Finisterre, so when I discovered the Kumano Kodo on the Kii peninsular south of Osaka my interest was piqued to say the least.

We were heading to Oz anyway to stay with our son so a 10 day stop over was planned. A very helpful agency ( kumano-travel.com) assisted with sorting accommodation along two different routes to the 3 Shinto/ Buddhist shrines that have formed this pilgrimage for over 1000 yrs.

Starting at 800 m altitude in Koyasan, the Kohechi is the toughest of the half dozen routes, traveling over 1000 m passes everyday on steep tracks through the forested mountains. We arrived by bus on switchback roads from the airport after a sleepless day and nights flight from Ireland via Finland. 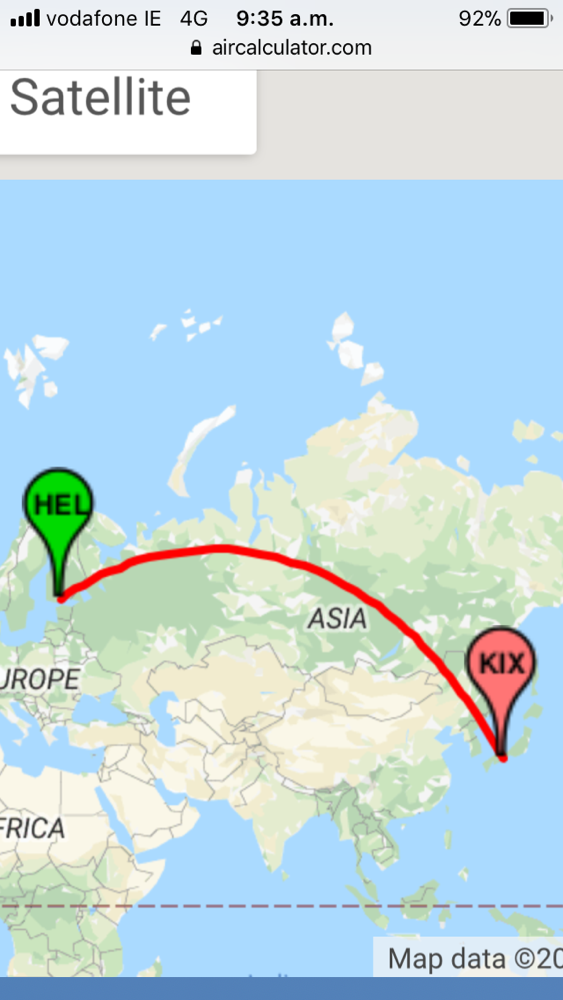 We got in the mood for some Japanese style ” forest bathing” in the middle of hectic Helsinki airport where a 360 degree movie of forest, stream and lakes was very chilling.

The real thing came as soon as we got off the bus with a steep stepped path up through the trees to our first shrines and temples with votive offerings of candles, coins and incense. 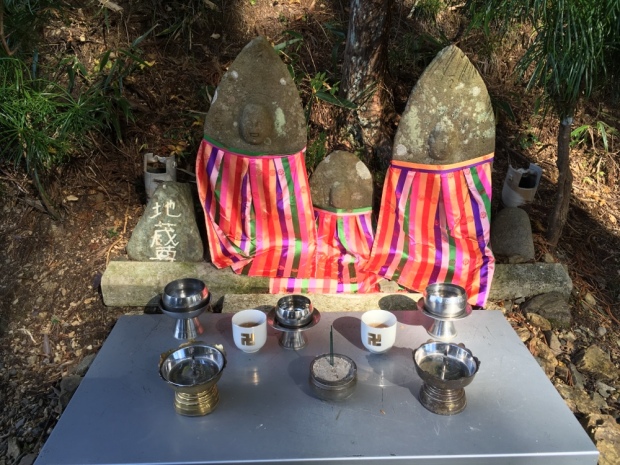 We entered the Koyasan sacred temple complex through the Daimon gate and continued in the unexpected sunshine to explore the UNESCO World Heritage site. 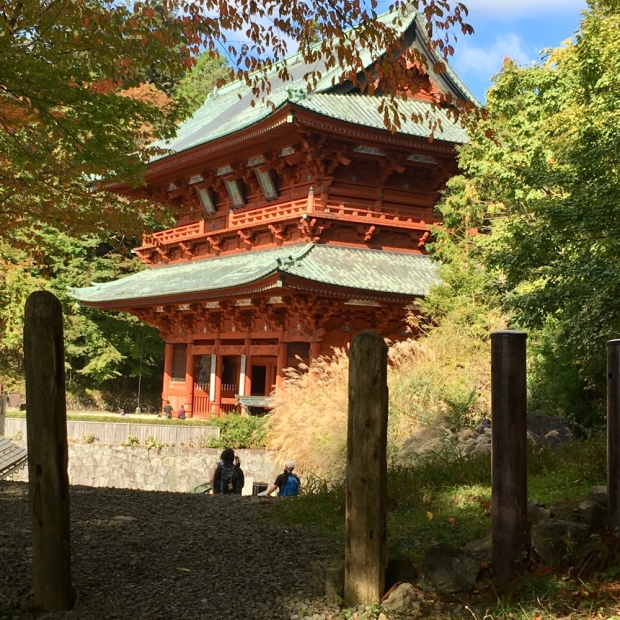 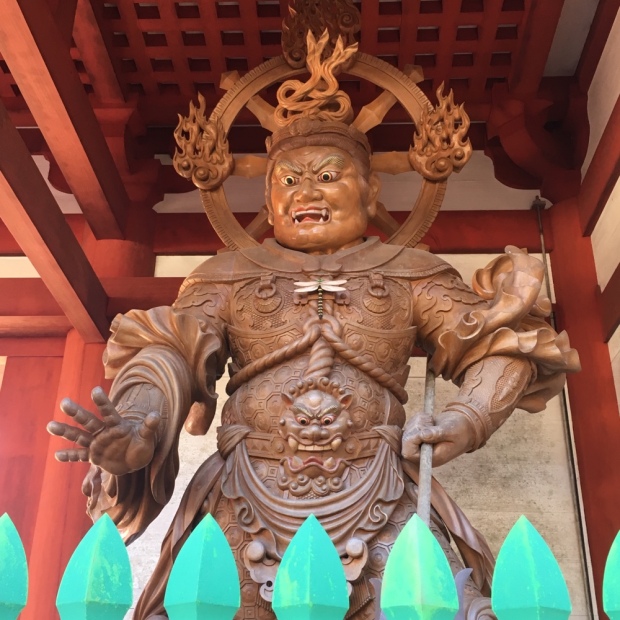 We had read that the autumn colors could be spectacular- and indeed they were. There were many holy water sources that people were bathing in and drinking from and Buddhist monks were selling calligraphy and assorted charms and amulets. 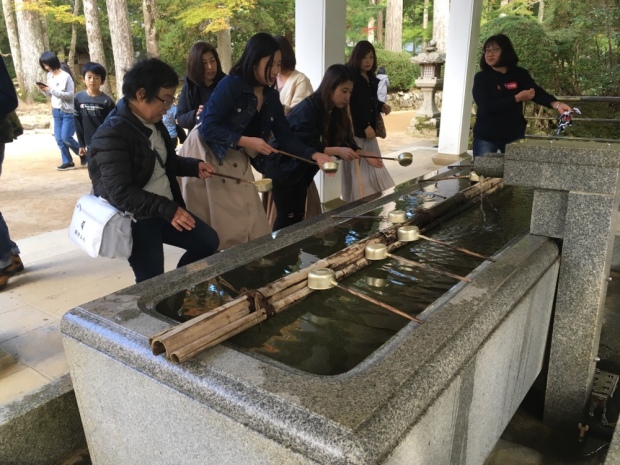 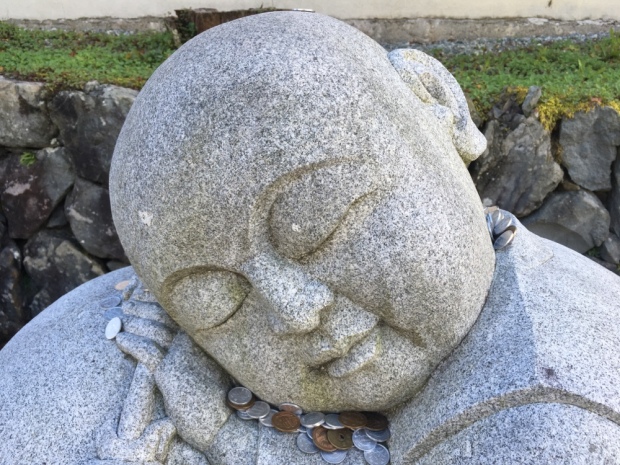 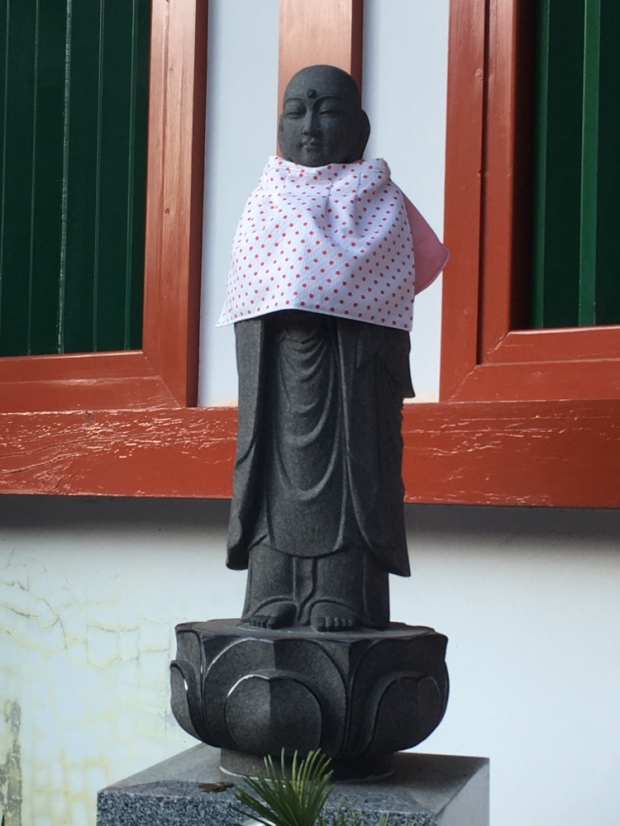 They seem to dress the statuary for dinner! We called into the tourist info Centre where I had arranged to pick up our ” pilgrim passports”. In 2014 I think, the pilgrimages were twinned with the Camino de Santiago and both declared World Heritage routes. So we collect stamps along the way to obtain the select status of ” Dual Pilgrim”!

We found the temple we were staying in and were led by a cheerful monk to a traditional room complete with sliding doors/walls of paper, futons, tatami mats and a little balcony onlooking a wooded garden. 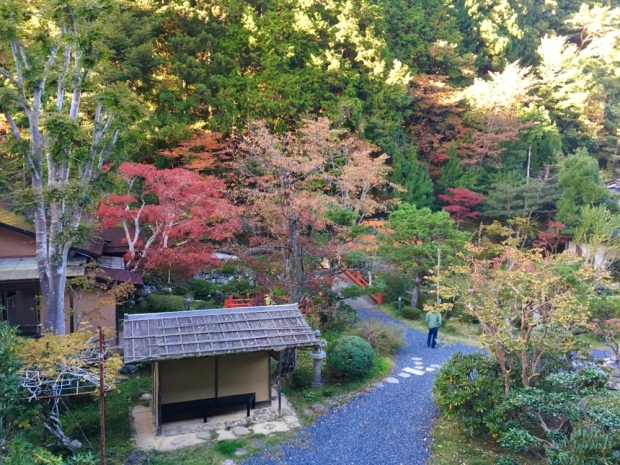 An early Buddhist vegetarian dinner, where a monk kindly gave me a little stool after witnessing my struggles to manage on the floor, of pickles, tofu, seaweed, rice, radish, raw fish, tempura, miso, shoyu and all our other old favorites was followed by a communal Japanese hot bath and bedtime in our kimono.

In the early morning we will attend the Buddhist ceremony with the monks and after another healthy vegetarian meal will strike out into the mountains on the first leg to Omata. Only 17km but estimated at 8 hours. Must be steep!