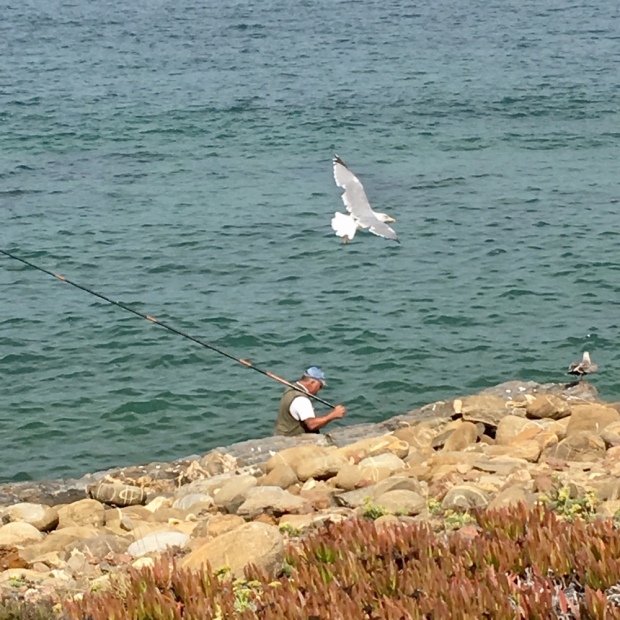 As this blog site can testify I’ve hiked a good few trails in the last few years, but I’ve gotta say this one is special.

If you like wild coastal scenery, walking through a gently undulating landscape of exotic flora and geology under blue skies and glorious sunshine before splashing in the crashing breakers of the Atlantic to cool off on secluded sandy beaches- then like me you’d love this Fisherman’s Trail. 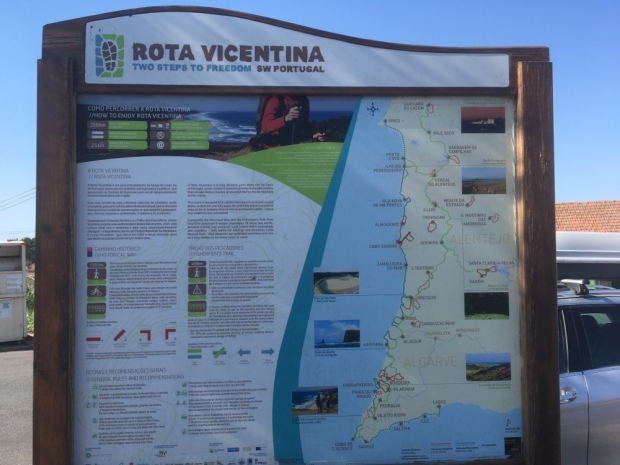 Normally walked from north to south, and the route descriptions are all orientated that way, we were going the other way. Partly because of the transport links and logistics but also we thought it a good idea to have the sun behind us as much as possible.

So even though it’s not recommended to be out here on the trail in the heat of August there has been a good few folk coming against us these last couple of days. Well maybe 10 or 20 people, so probably not much relative to many popular routes !

We set off pre dawn from Zambujeira following a long straight road past a huge area of tunnels and greenhouses. Even through the sandy ground would seem infertile they seem to coax a lot of crops out of it. Water and chemicals I guess.

Hoping to see some the many nocturnal carnivores of the area, mongoose,weasel,marten,badger,genet,otter- we only came across a couple of dogs. We had seen a group of wild boar the morning before and a few rabbits, which were supposed to be the ” original stock of all rabbits worldwide.

We reached the little fishing settlement of Entrada da Barca with its charming little houses and huts. 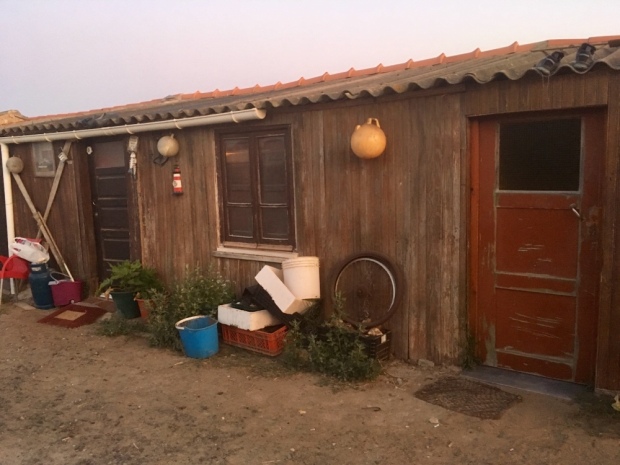 Down to the harbor where the boats were winched up the steep slip and up a zig zag of wooden steps to the cliff top paths above.

The first half of the walk to the little village of Cavaleiro was on a maze of vehicle tracks that ran along the cliff tops above rocky coves, many with precipitous paths or lines of rope to allow access for the hardy fisherfolk. The tracks also allowed access to many and varied campervans. 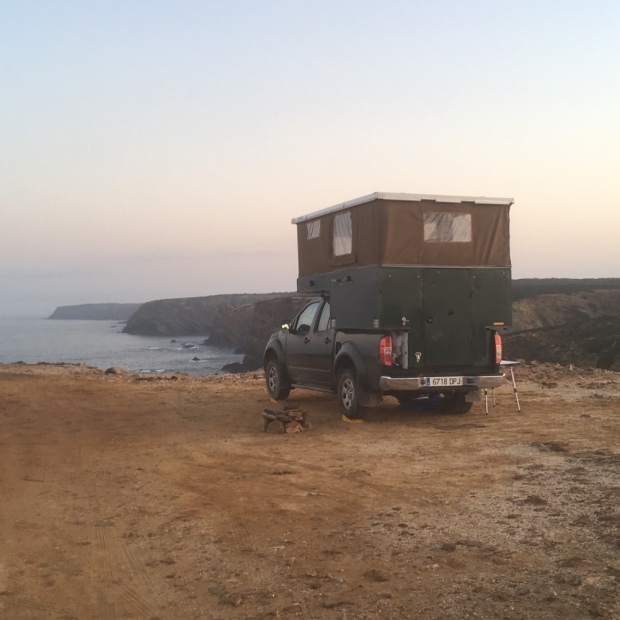 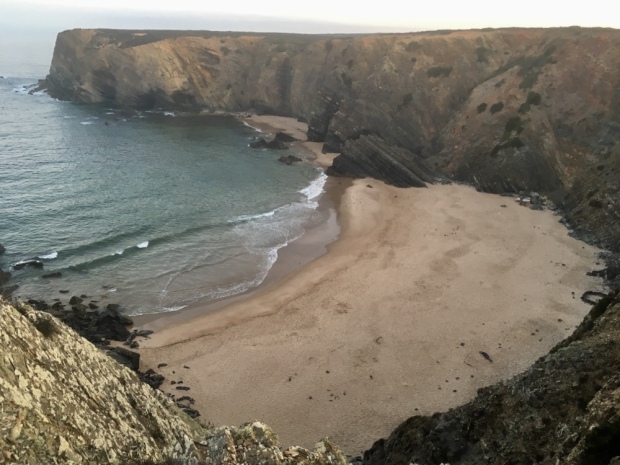 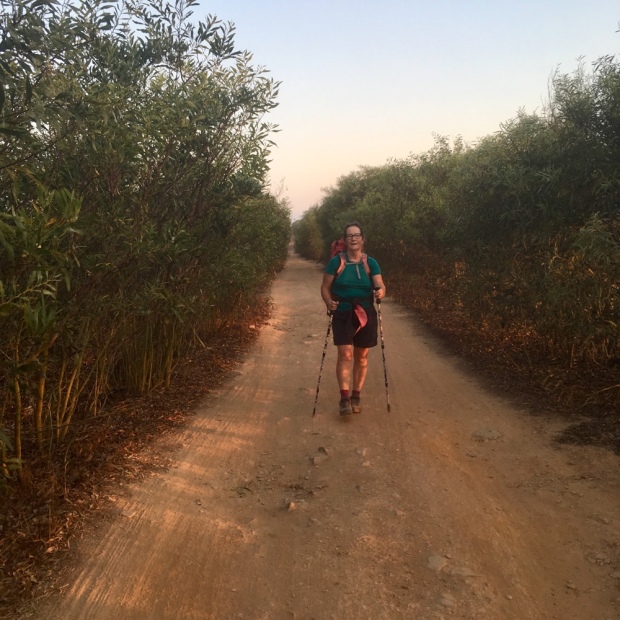 The dune vegetation got spectacular around the lighthouse of Cape Sardao where we learnt that many species only existed here. Famed for its bird life and unique stork nests the area also claimed to be the home of Rock Doves that are ” the original species from which all the feral pigeons in the world descend”! 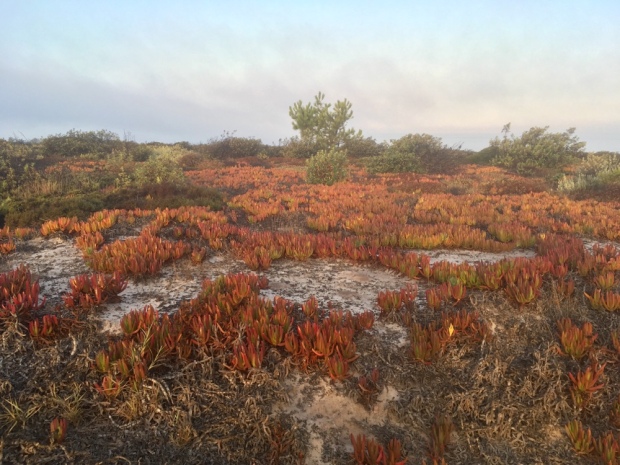 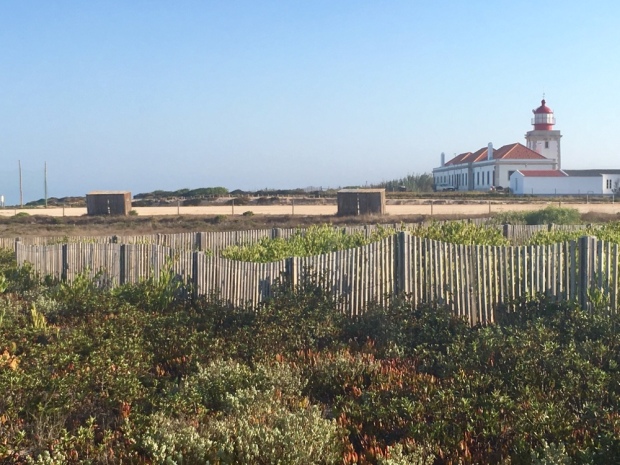 There were a number of viewing platforms built here and there presumably to help wheelchair access but seemed a bit of a eurofund folly.

Diverted inland to Cavaleiro to avoid a specially sensitive area we had coffee and chocolate, admired the farm buildings on the outskirts and then continued on a fantastic route of rock and dunes and forest of pine and acacia ( which we had learnt was very invasive and is spreading wildly) 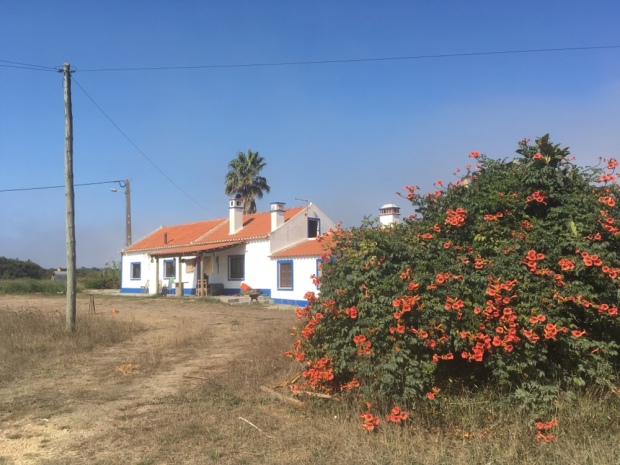 A sea mist had come in lending the scenery a mysterious aura. 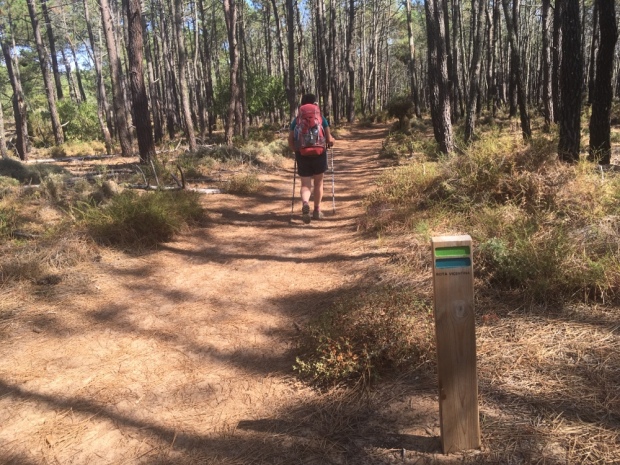 The craggy rocks and red sandstone cliffs were laid down over twisted and convoluted layers of an older base making a truly dramatic shoreline. 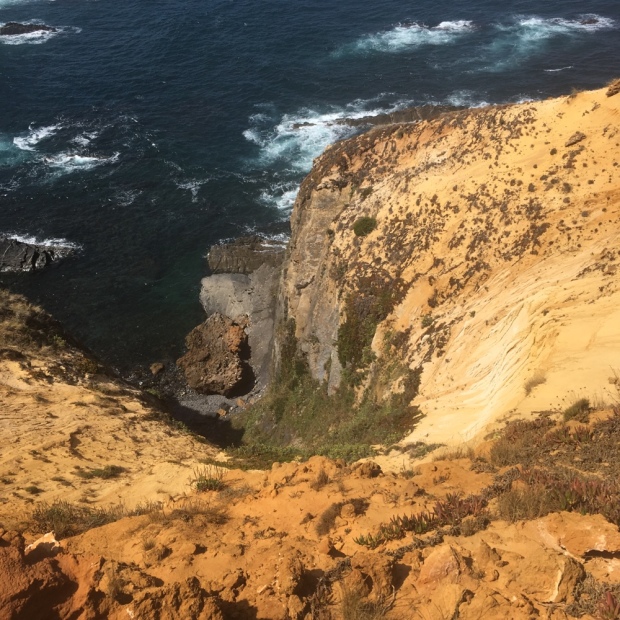 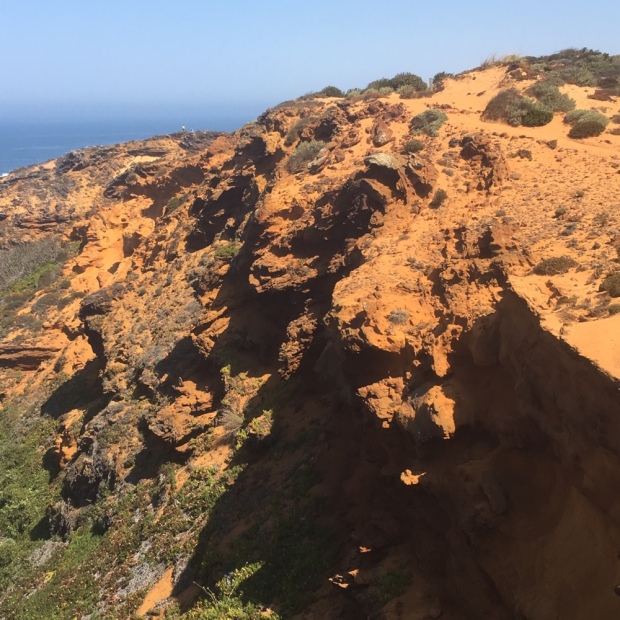 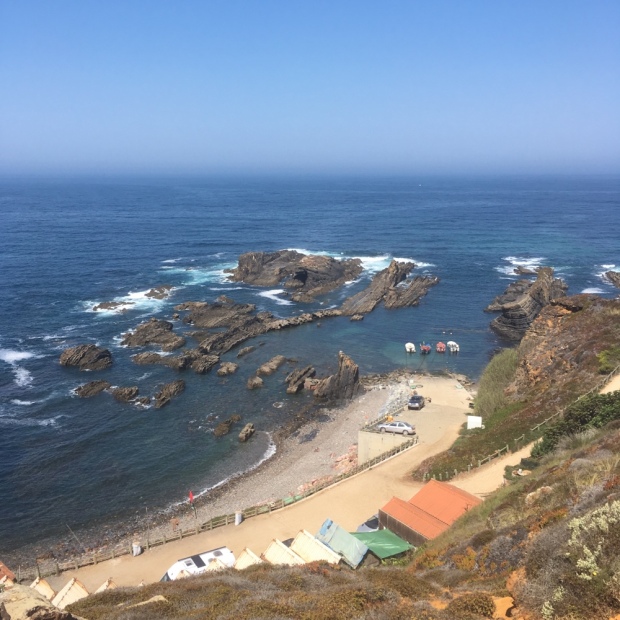 and were glad to reach the beaches of Almograve where we took a couple of hours out to enjoy the breakers before heading on again past the final coves of the day to our room in the youth hostel. 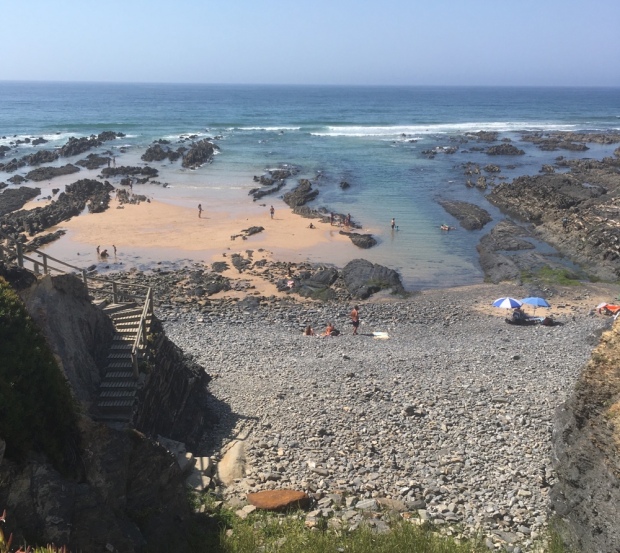 In the village there was an exhibition of photos and graphics of a huge oil spill that took place in 1989 and turned the entire coastline we have been walking into a black environmental nightmare. The massive clean up operation seemed successful though as we had been remarking how pristine it appeared to be. 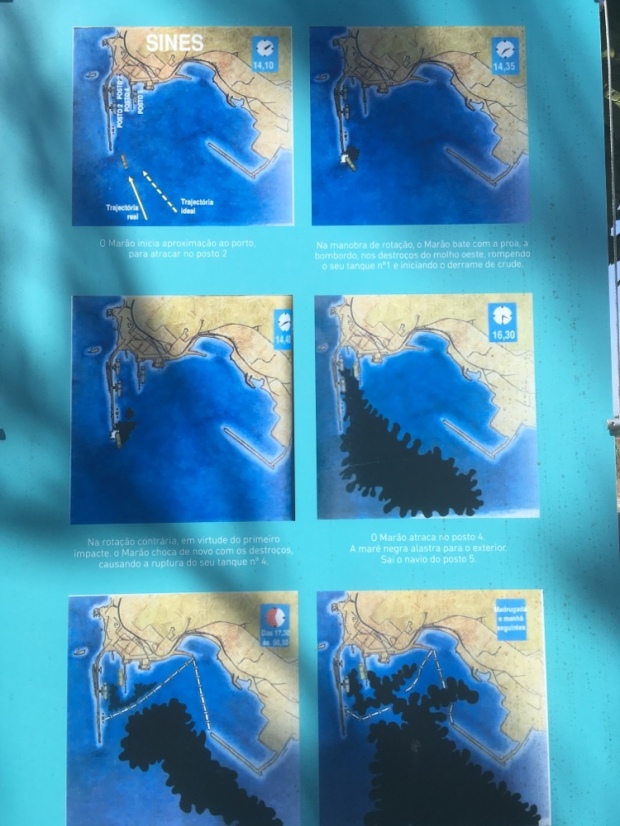 A leisurely start this morning as we expected to be able to avail of a ferry service across the river Mira at the end of the hike, thereby shaving off 4km of mostly road walking. So with what we thought to be an easy 14km ahead of us we laid abed till 7! looking at the misty world beyond our balcony.

A slap up breakfast fueled a brisk walk out out town, past the grotto, fountain and wash area, onto a sandy path beside farmland and off to more coves passing fishermen returning from their spots. 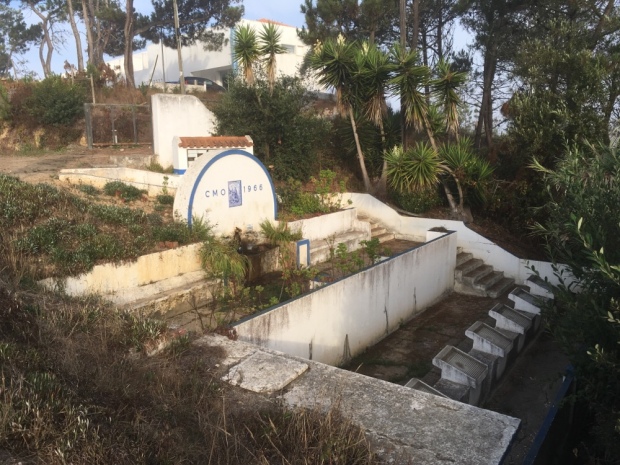 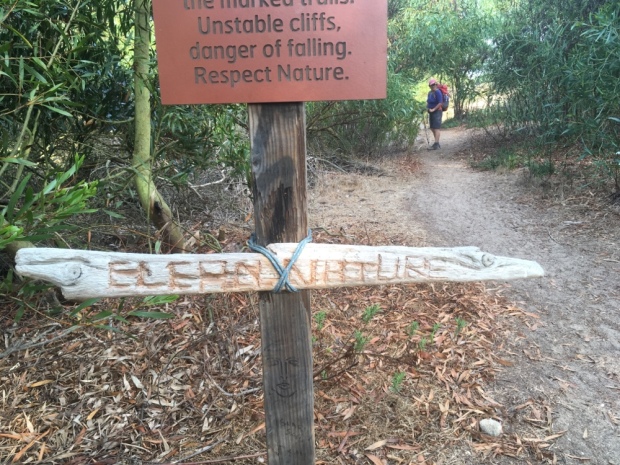 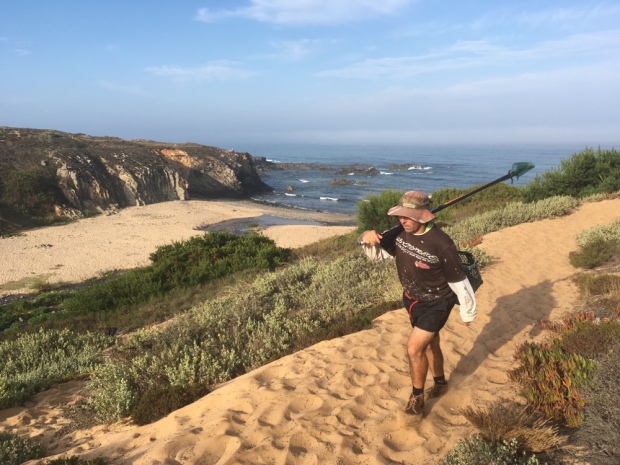 Later we were amazed to see a fisherman casting from a rocky reef way out in the sea. Not sure if you can see him. 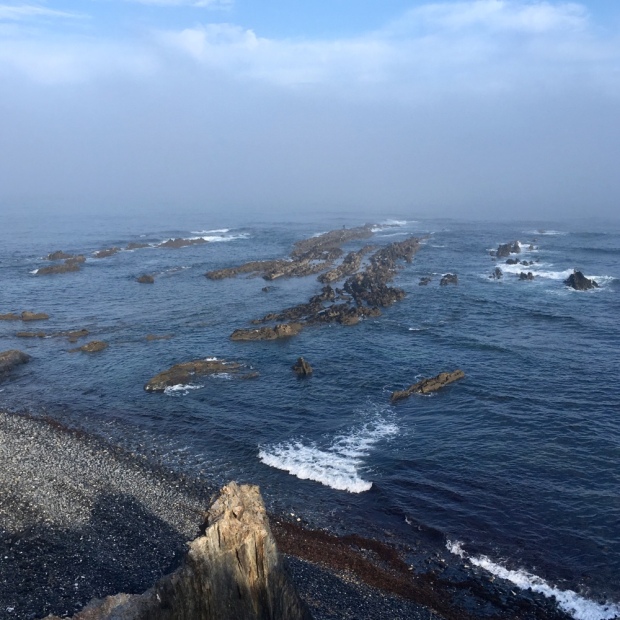 There was a lot of soft sand dunes to navigate past another set of beautiful coves for a few km before suddenly emerging next to irrigated glassland for grazing cows and cropped turves. 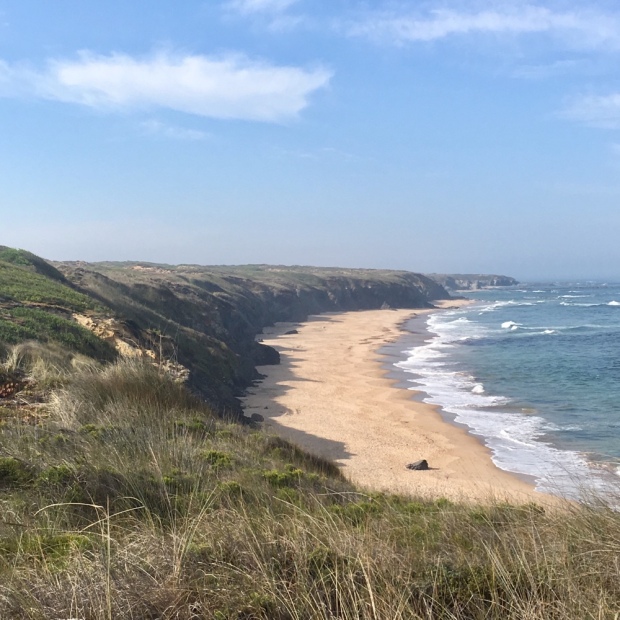 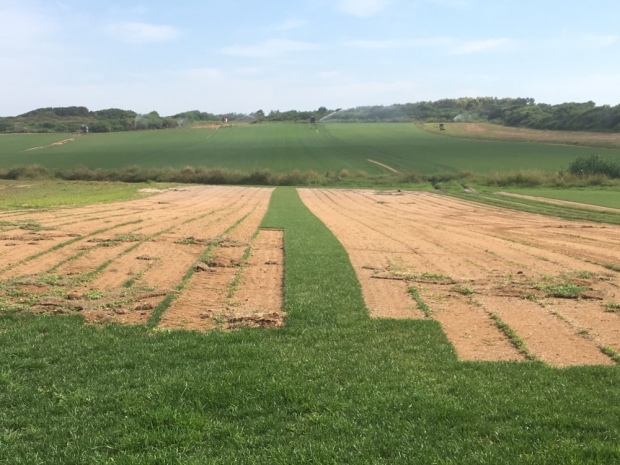 There was a series of wooden bridges over streams and tunnels through rampant vegetation of canna and acacia, and a lot more sand.

And then we were at the beach bar at Furnas looking for the ferry.

Alas it was not running. Don’t know why. Plenty of signs for it. It meant hiking down river to the bridge and a lot of fast moving cars as we trod the tarmac.

It wasn’t all bad though. The route went passed an interesting landscape of farmland and cork oak and river views before landing us in the maelstrom of a holiday Sunday resort town in full flood.

And a couple of goats on a table.