After 3 days deep in the valleys and high on the mountains on a constant roller coaster of ascents and descents it was a great relief to have a day on the flat. The altitude profile map had a maximum altitude of 12m although bizarrely there were sections marked as 2 or 3m below sea level. They must have known the tide would be out!

With the dawn promising a fine day I headed off down the prom, remembering it was a year ago I was doing a similar promenade walk out of Malaga at the first stage of this epic circumnavigation. 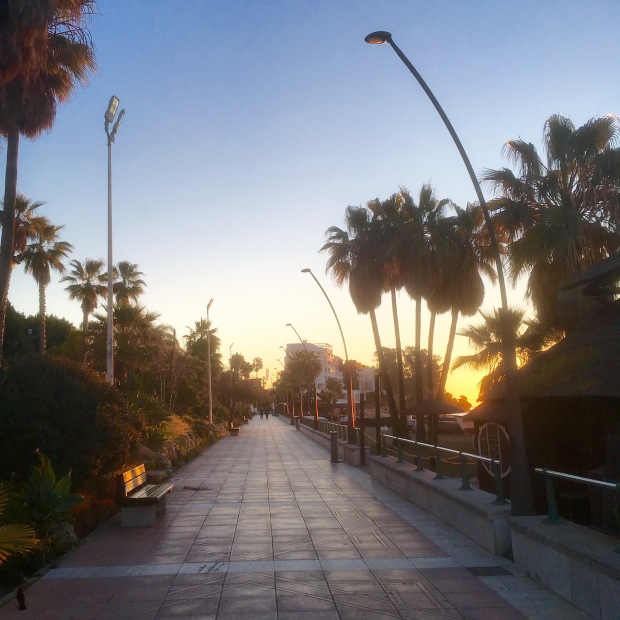 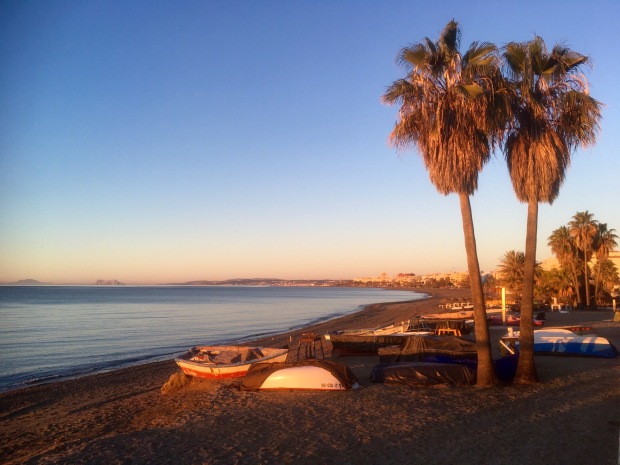 I could see the Rock of Gibraltar rising from the placid waters and a line of jagged Atlas Mountains away in North Africa. 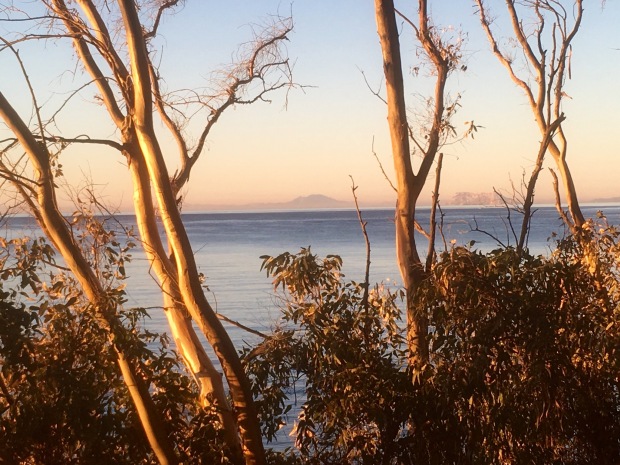 Some of the old houses in the town came right down to the seafront and at high tide they could go swimming from the back doors. 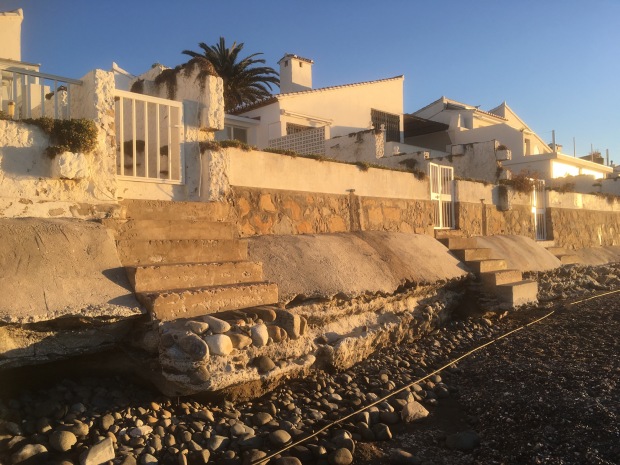 There was quite a bit of walking on sand and pebbles at the start of the stage which forced an effort I’d hoped to avoid.

The big villas and exclusive enclaves started, with their high fences and security cameras. You could edit a strange film from the footage of an unlikely bearded man with rucksack hiking the Costa. 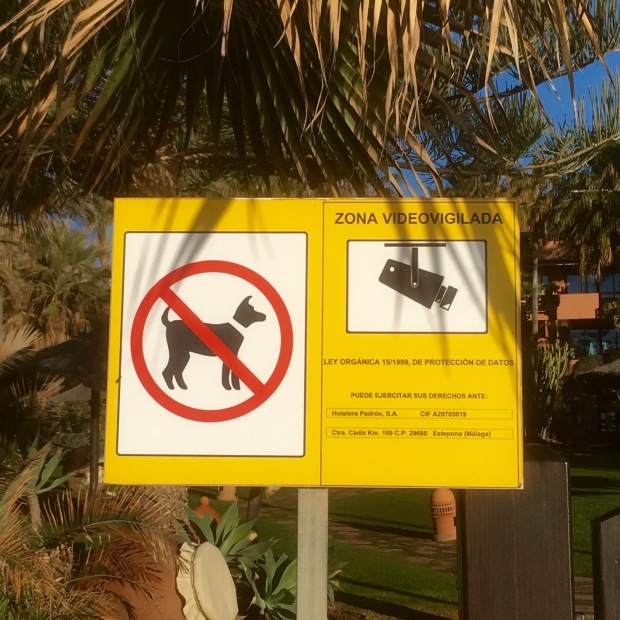 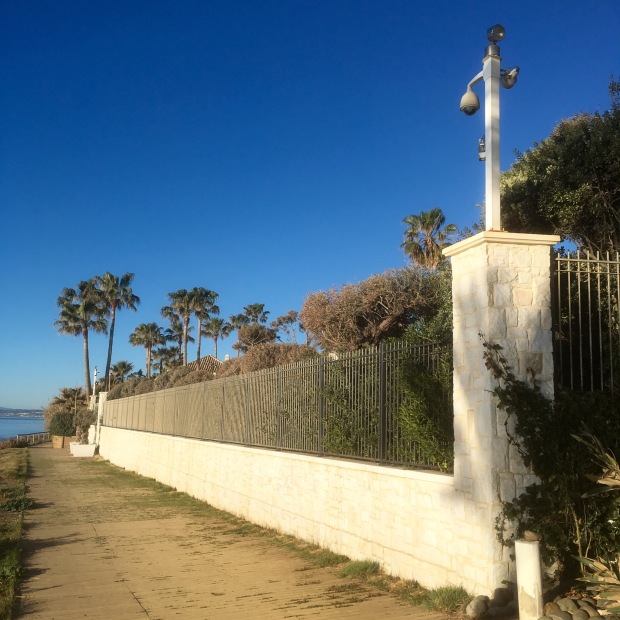 But it wasn’t all premium properties. Tucked away here and there there were still little pockets of scrubland, simple houses and fincas, camper vans and caravans. 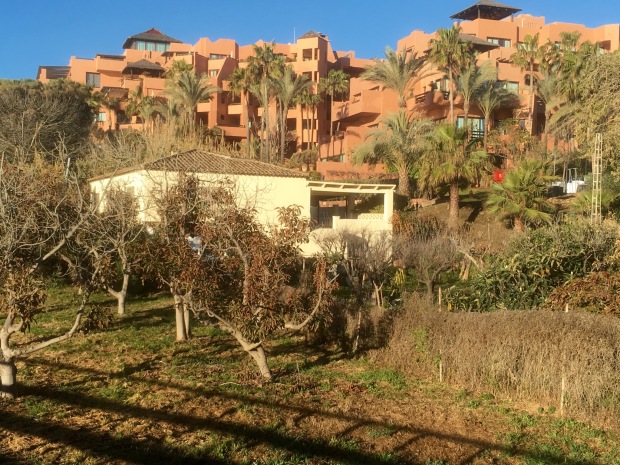 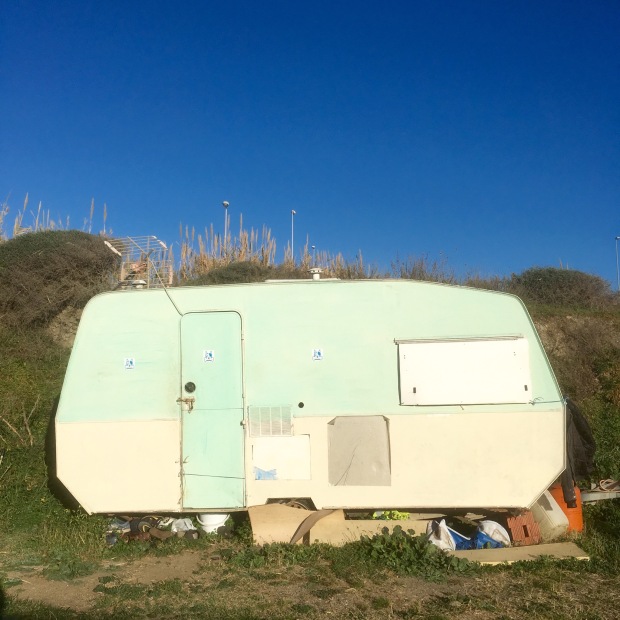 Some stretches were very quiet. I know it’s not the summer season but many resorts and condominiums seemed deserted. Some were rusting and crumbling away with empty or green pools and broken windows. But eerily a couple of apartments were lived in in the midst of once upmarket desolation. It was like something out of a J G Ballard story. 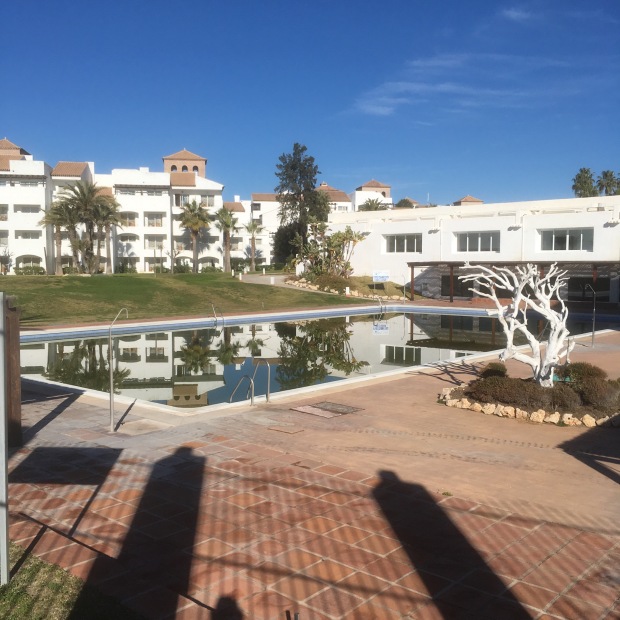 But most stretches were pleasant enough with nice plantings and paving. 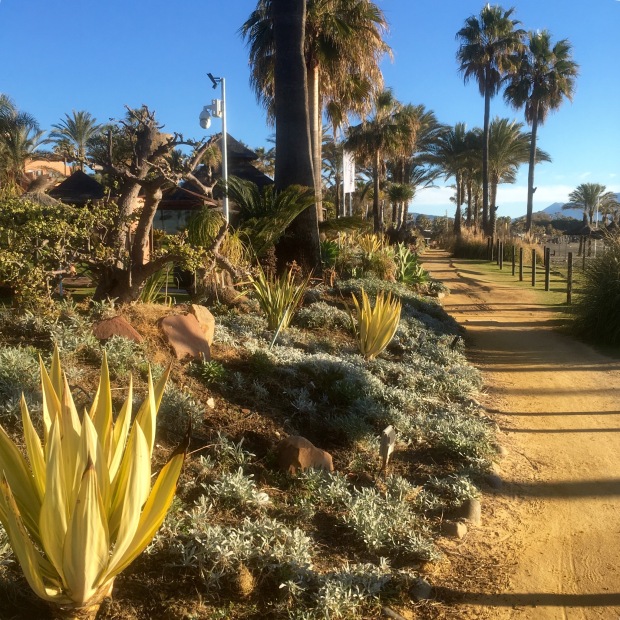 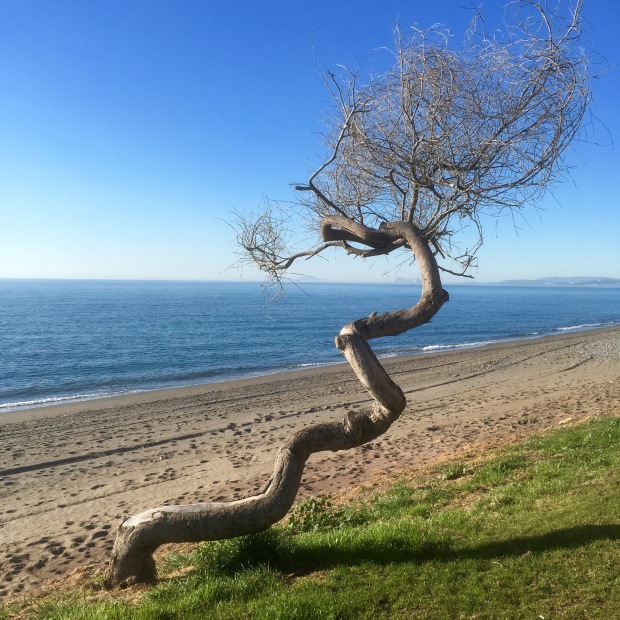 Every so often id pass an ancient watchtower or medieval beacon in a range of different settings.

Of course Puerto Banus’s had to be the most premium exclusive property.

What an astonishing ostentatious display of wealth and desire is open to the rubberneckers in a couple of Kms. 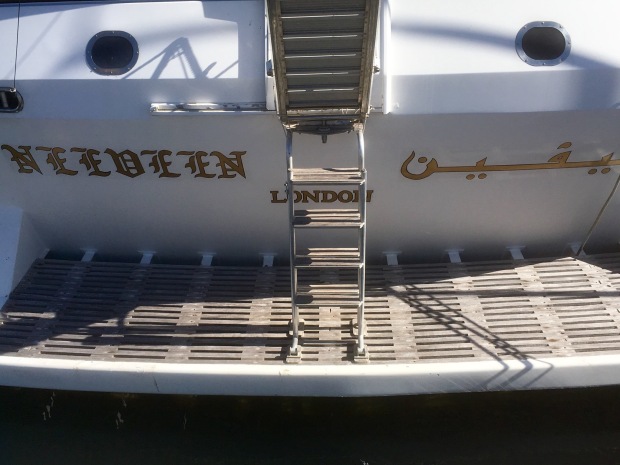 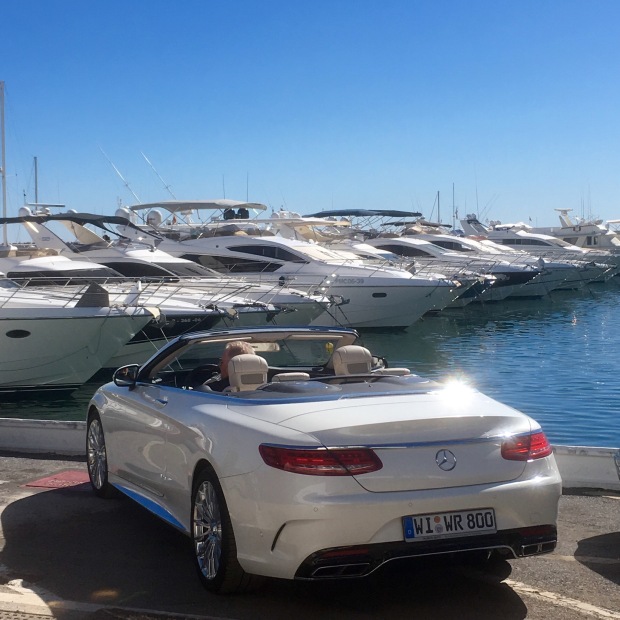 Ironically the whole place was having its streets dug up and replaced so it was chaos with a lot of unwanted dust landing on cars,boats,restaurant tables, clothes and hairdos.

But the Puerto is a small world apart and soon I was back to the beaches on the way to Marbella. 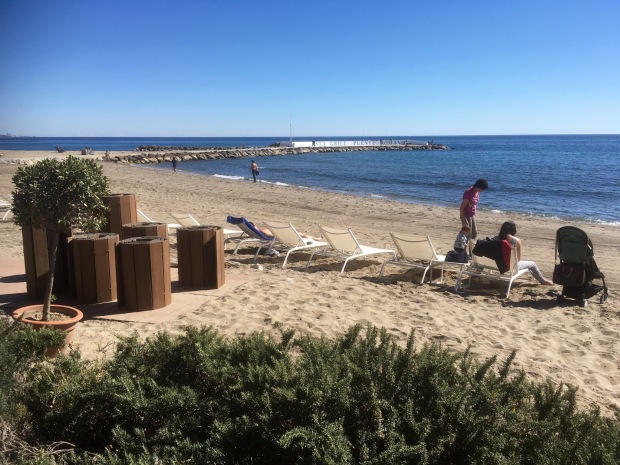 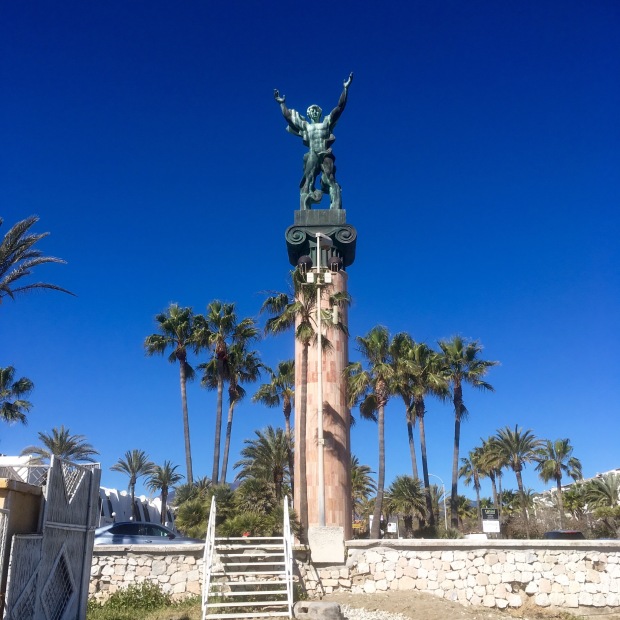 There are a lot of rivers and streams that make their way from the huge wall of mountain inland trying to get to the sea. Most form kind of lagoons on hitting the beaches and slowly filter through but others contain enough flow to make it and these are bridged by the extensive boardwalks.

On the outskirts of Marbella more mansions appeared, or rather the walls and gardens surrounding them did.

And suddenly a signboard for the next stage which led me up a landscaped path beside a stream with a deep bank displaying the trees roots.
It had been a big change from the last few days but variety is the spice of life they say. I can’t say I won’t be glad to head for the hills again tomorrow though.
The grass is greener up there. 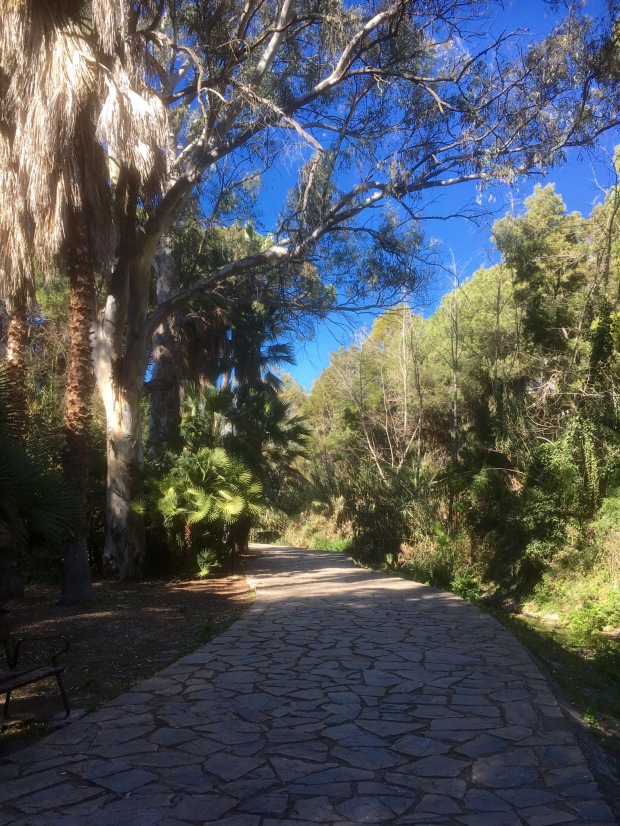 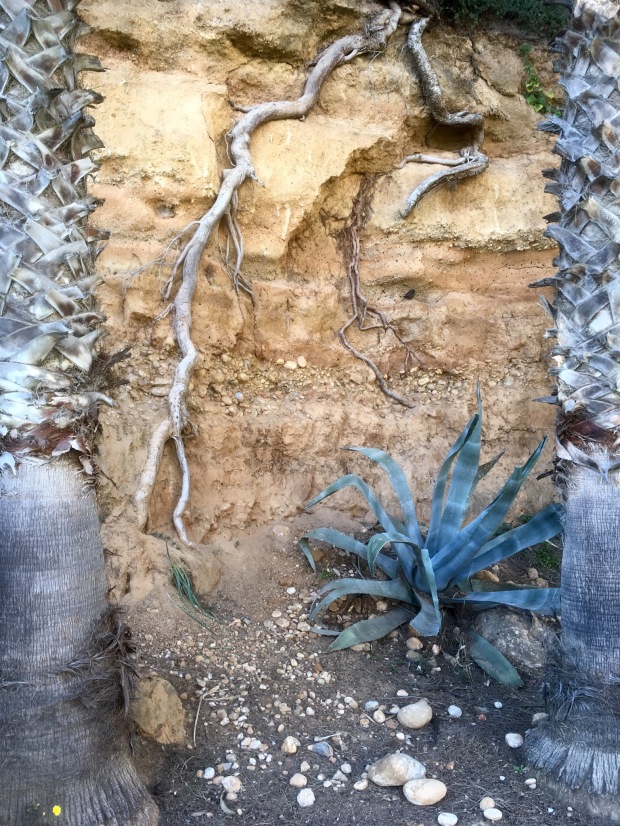