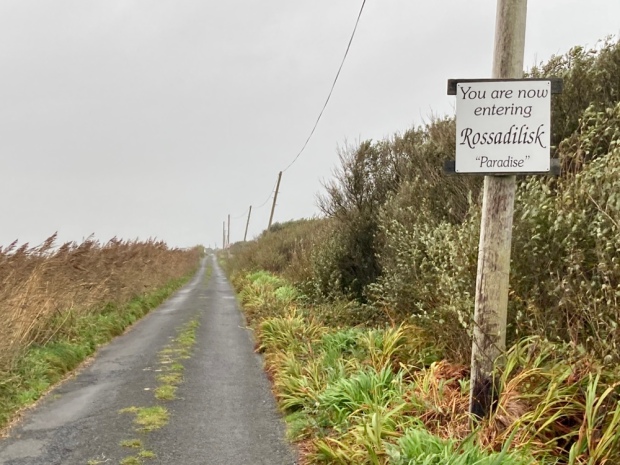 A few days commitment free and an invitation from old friends to visit them on Omey Island was all the encouragement we needed to load up the camper and head into the west. The Wild West weather wise. Our friends place on the far western edge of an island off the far western edge of Ireland was no place for camping the day we set off so we decided to seek shelter and explore the Aughrus peninsular to the north till the weather improved.

Parking up at the harbour in Cleggan we took the little boreen up past the pink granite house that the poet Richard Murphy built himself from the stone of abandoned cottages. The lane led us up one of the many drumlins in the area, little hills of boulder clay and glacial till. The good drainage afforded made for more fertile grazing land and the appearance of the stone studded soil, viewed from the sea that has cut a cross section through it, explains its name- Cnoc Breac / Speckled Hill. 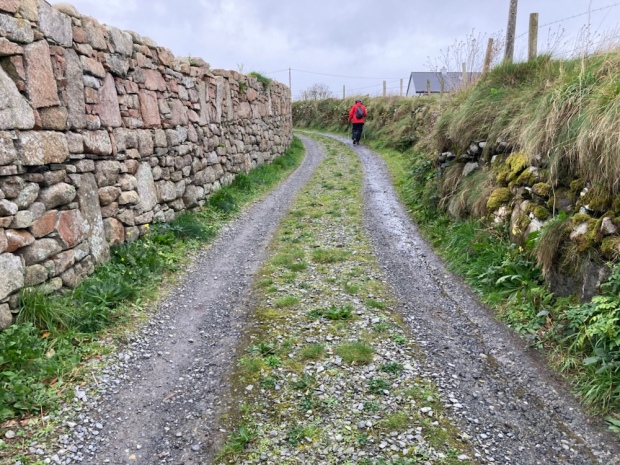 Cresting the rise we continued down a long neglected little boreen through fields of cattle with faint views of the islands of Inisbofin and Inishshark across the misted sea. A fine Neolithic tomb, erected perhaps 6000 years ago sits near the sands of Sellerna Bay ( Sailearnach- sally or willow garden) where willow for lobster pots and baskets would have been grown.

Above the other, western, end of the crescent beach lies another, sadder, memorial to death. A scattering of small stones amongst the grassy tussocks are the only markers to the lives of the unbaptised children in this Cillin.

Crossing a little stream into the town land of Rossadillisk- named after the edible seaweed dillisk or dulse that grows on the shoreline-we clambered over the rocks before discovering an easier cliff top path that led us to the next beach, Tra Bhride ( Bridgets Strand) where some enigmatic structures look out onto the scene of a great tragedy.

The Cleggan Disaster of October 1927 devastated the area when a violent storm swept down the coast taking the lives of 45 fishermen, 16 of them from this small town land – dependant on fishing. Prior to the storm there were 36 households here- within 10 years it had reduced to 6, ruined by the event which also took 10 lives from Inishboffin and 19 from Lacken Bay and Iniskea island further north in Mayo, where the tragedy led to the total abandonment of the island I visited and wrote about in my The Back of Beyond: The Barony of Erris blog post. A heart and community breaking event which saw a calm and pleasant evening turn without warning into hellish maelstrom that smashed the fragile canvas currachs onto the rocks within sight of their families who wailed from the shore. 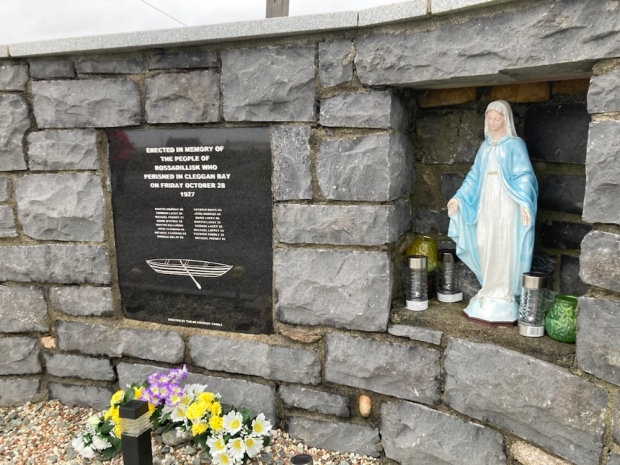 We left a lone brave swimmer and carried on around Rossadillisk Point to the little harbour pier and jetty jutting out towards the off shore reef. 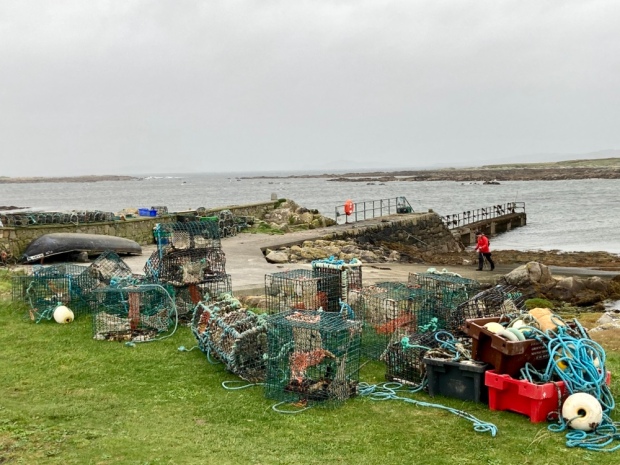 Paradise in fine weather maybe but the winds on this western fringe can raise a sand storm, tear flags apart and, as it did in October 1927, rip the roofs from houses. Luckily we only suffered some squally showers on our return to Cleggan.

The bald dome of Cleggan Head rises 500ft above the ocean on the north side of the bay and in the morning we walked across the causeway between beach and lake towards it. Not to scale it’s bracken and heather clothed slopes to the ruined Napoleonic signal tower in search of the resident Peregrine falcons but to follow the farm track, past the fine Victorian complex of houses and converted outbuildings of the Musgraves estate and down to the little cove of Port on the headlands northern shore. 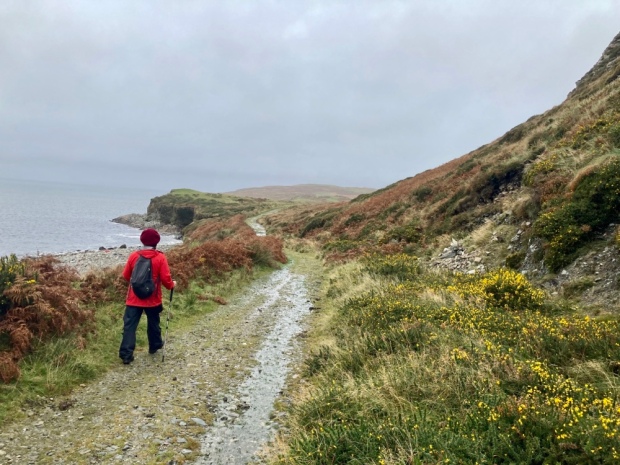 The farms 500 acres of rough grazing on the head along with another 500 of commonage to the east are part of a Europe wide study of extensive grazing and the ecology and biodiversity and farm incomes that can go with such a sustainable system. People have certainly been farming here since the very first clearance of the trees over 5000 years ago, a monument of those original settlers lies next to the sea below the track – a humped backed wedgetomb. Passing another monument, to a family member who died in a riding accident, we carried on through a series of cleverly hung self closing gates to the little secluded cove and its ancient holy well. 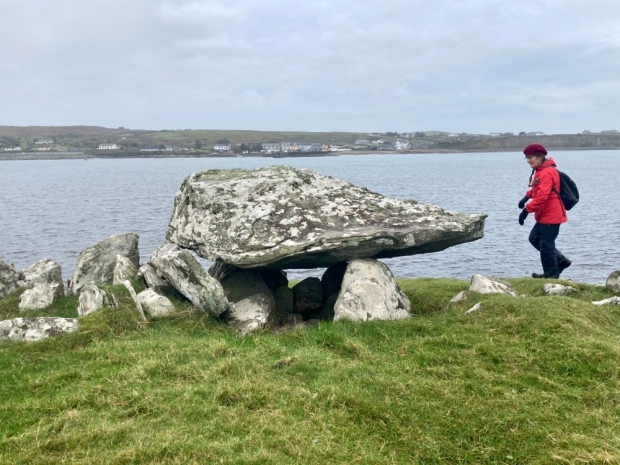 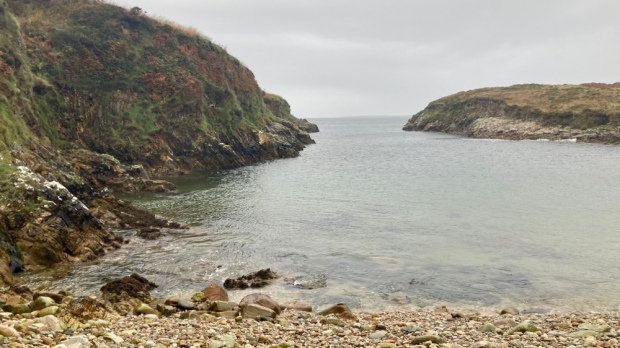 We came upon an injured young seal on the grassland above the beach and spent a good while in worried telephone consultation with Jo from the farm and Seal rescue down in Wexford who were sending out a local volunteer before we managed to encourage it back into the water to hopefully find mum.

After watching the seal disappear into the water we explored the dramatic and indented rocky cliffs of schist before retreating from another wind driven shower. 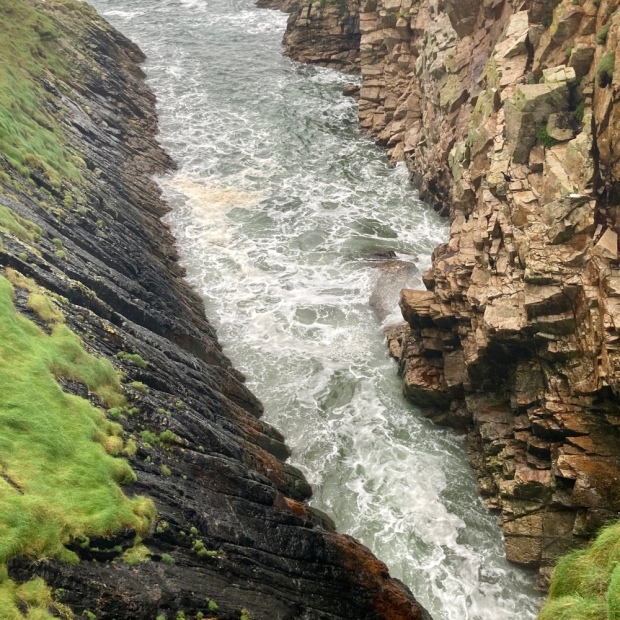 After lunch in the camper on the causeway we embarked upon walk number 2 on the above map of the area, to explore the town land of Sheeauns, or Na Siain, the fairy mounds, an area of low rounded hillocks of glacial moraine or drumlins that accommodates a wealth of Bronze Age monuments. Stone alignments, rows and sacred standing stones litter the landscape hereabouts along with the 1000 year older tombs of Neolithic times. Portal tombs, wedge tombs, court tomb and passage tombs – different designs laid bare after millennia of wind and rain have washed away their covering of soil- 32 of which have been found in this corner of Connemara , the richest concentration in Ireland- testify to a rich and unknowable past life around these quiet fairy mounds that now harbour more recent relics of people gone before. 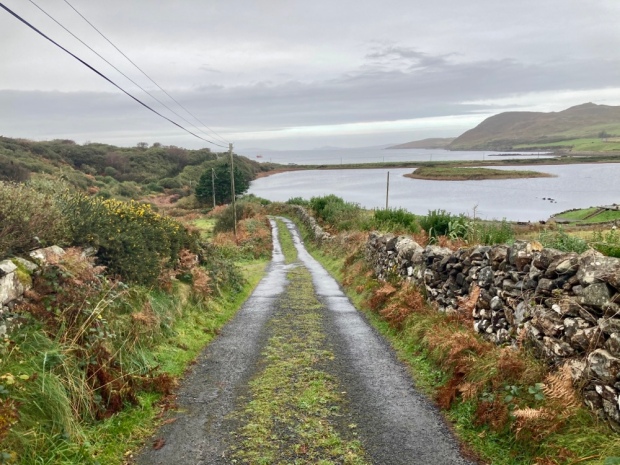 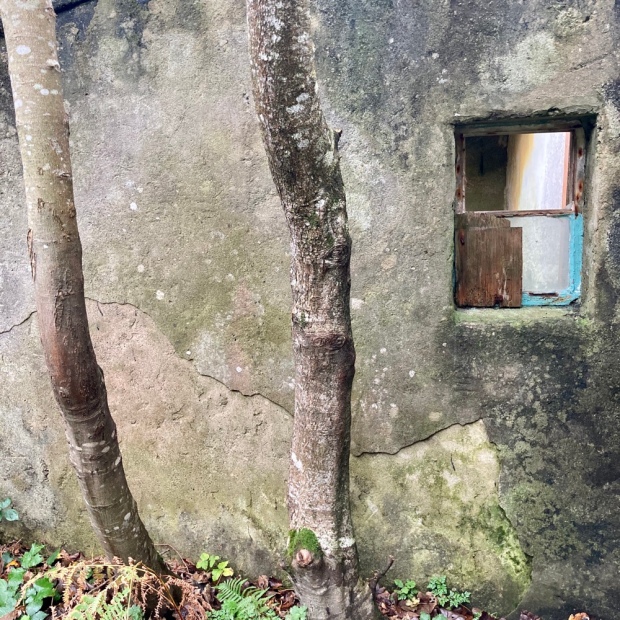 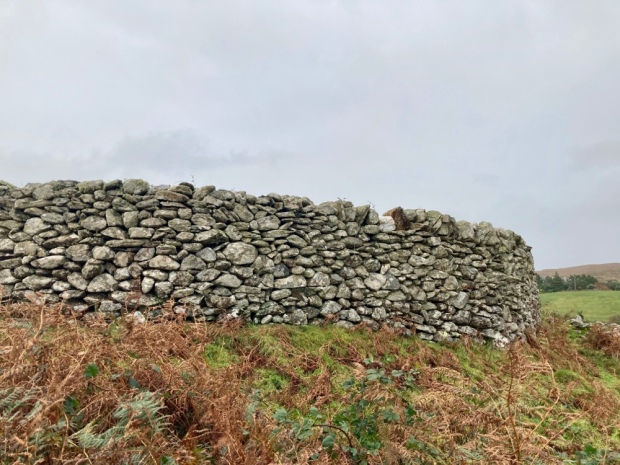 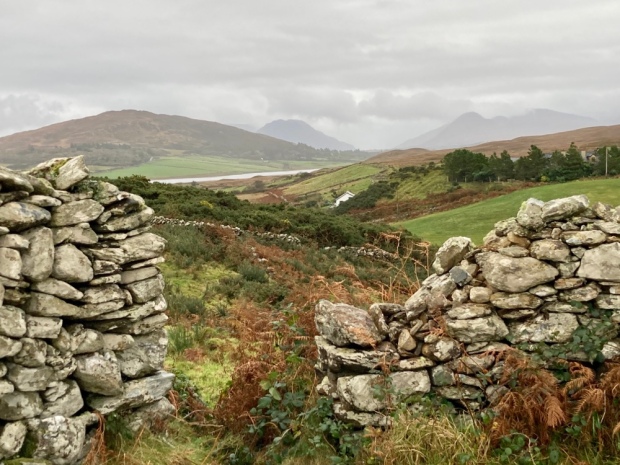 But in climbing up to inspect the ring fort atop a prominent fairy hill I incurred the wrath, not of the fairies, but of the farmer who owned the land and the cattle or sheep pen that had been refashioned from the Iron Age structure. Banished from the ancient homestead I retreated to the camper and onward to Sellerna beach for the night.

With an improvement in weather forecast we were ready for Omey but had to wait for slack tide in order to cross from the mainland. That gave us time next morning for one more exploration of Cleggan head and its beaches and cliffs.

A couple of km east of Port the OS map showed a track from the town land of Bundouglas crossing northwest across the headland towards high cliffs on the indented coastline. From there we hiked back around to the stony beach below Shanboolard Hall which we also planned to visit.

The track, presumably made for getting to the shallow turf banks scattered across a wide area, ended abruptly at the high cliff edge. The savage seas here have torn into the sandstone and glacial till leaving the harder quartzite jutting out or standing tall in defiance. Kayak tours are popular below the cliffs, exploring the caves, coves, arches, stacks and stumps. 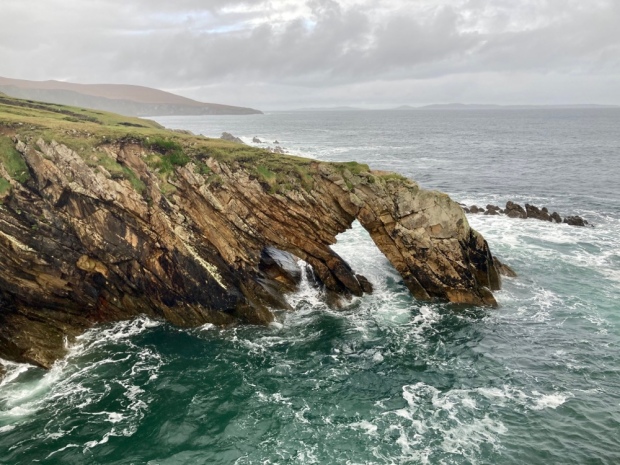 Making our way eastwards along the high ground buffeted by squally showers we passed a series of small bays, deep clefts scoured out by the waves, with exotic names- Ooeyuna, Ooeywalter, Ooeywaria, Ooeyandinnawarriv, Ooeylaunnlauraush and Ooeyansconsa. Views opened up down Ballynakill Harbour towards the 12 Bens and eventually we made it down onto the crescent wall of storm tossed pebbles and crossed to climb the grassy track leading up to Shanboolard Hall, another fine Anglo Irish estate house now an organic farm with walked gardens and a mighty wind turbine. 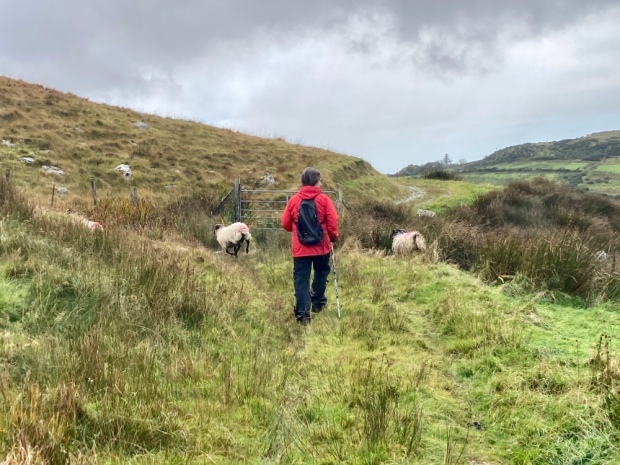 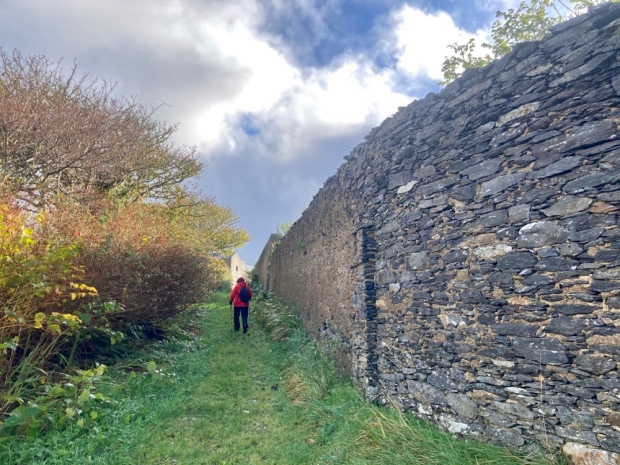 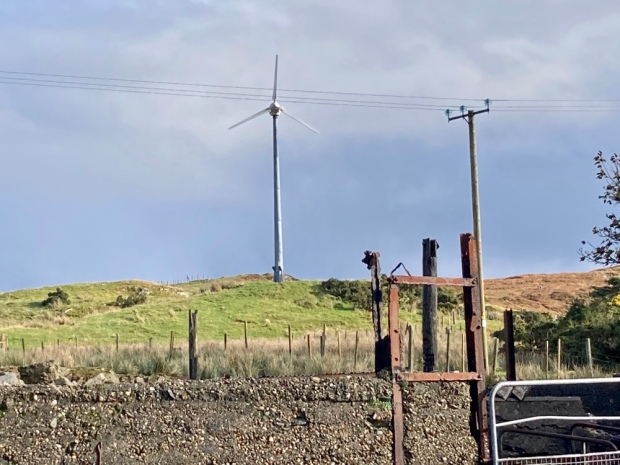 Related by marriage to the Musgraves of Cleggan House ,just over the headland, the former owner here relished in the name Captain Graham de Montmorency Armstrong- Lushington Tulloch. Now producing a wealth of organic fruit and veg they also have free range pigs and chickens, Connemara ponies and horses and a few Guinea fowl and bee hives. And a 3 bed holiday cottage to let. We had a chat with a couple working away in the garden and returned to the storm beach, crossing the stream emerging from the reed covered wetland. 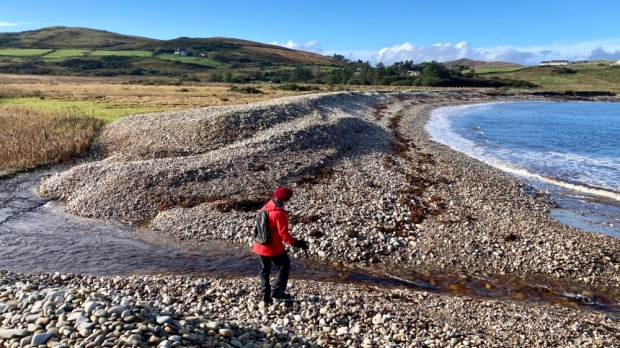 The constant movement of the beachpebble mound was illustrated by the buried line of redundant fencing that led us to the boot marking the way back to the camper.

The sky was blue, rain and wind gone, the tide was retreating so off to cross the strand to Omey. Home to nearly 400 people before the famine and half that shortly after, it has only one permanent household now, our friends on the far western tip. The way across the wave rippled sands, open a few hours either side of low tide, is marked although locals seem to use other routes. 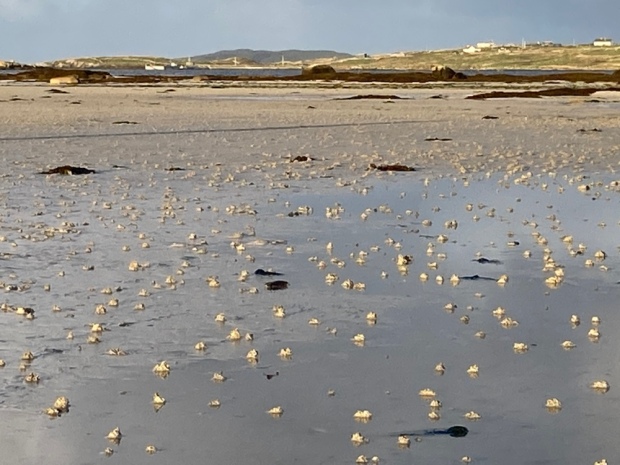 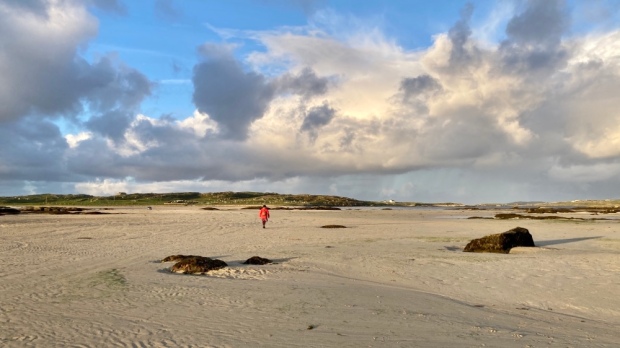 Once across the one narrow track leads up a rocky shore and passed small fields of grazing cattle on the eastern side. There are no sheep on the island, leaving it to the multitude of rabbits, whose burrows litter the sandy banks, to nibble the machair vegetation down to the nub. A large circular lake, Fahy Lough, takes up much of the centre of the island while the west is open and wild, with outcrops of granite looking like the works of Hepworth or Moore. 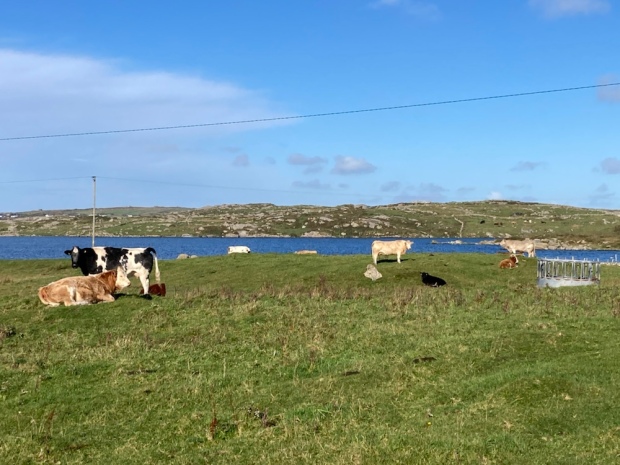 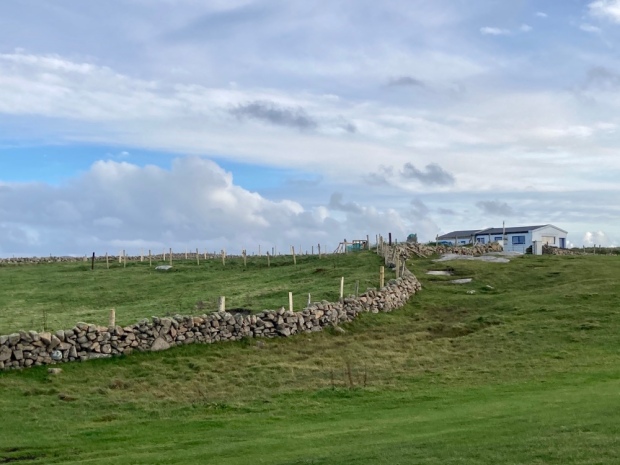 We took a leisurely stroll in the afternoon sun across the beach of Tra Rabhach to visit the holy well of St Feichin who came in the 6th century to found a monastic settlement and encountered fierce opposition from the locals, reputedly the very last pagans in Ireland. We carried on over the hillock high point of 26m adding our offering to the cairn and went on to gaze down at the excavated ruins of the medieval church, buried for centuries beneath the sands until dug out by the parish priest and locals in 1981. 100 years earlier, in 1881, a touring Daily Mail writer noted ” against the inhabited part of the island is what is now a mere sandbank. It is covered with sand, and not a soul dwells thereon. But there were people there once who clung in their stone cabins till the sand finally covered them; so that they might fairly be described as dwellers or burrowers therein”

The island struggled to feed its 400 inhabitants in the thin sandy soil although potatoes could do well as the same writer noted,” There us too much fresh air; for it blows so hard that people are afraid to disturb the thin covering of herbage……” if ye break the shkin of ‘um, your honour, the wind blows the sand away and leaves the pitaties bare. And, begorra, there are nights when the pitaties themselves ‘ud be blown away”.”

But we were blessed with being on Omey during a possibly very narrow window of time when the living is easy. There have been many changes to the island since the 1000 yr old shell middens were created here from the wastes of the society. And the changes wrought by the wastes of the present global society are likely to really stir up the sands of Omey. May St Feichin and his pagan god predecessors protect us. 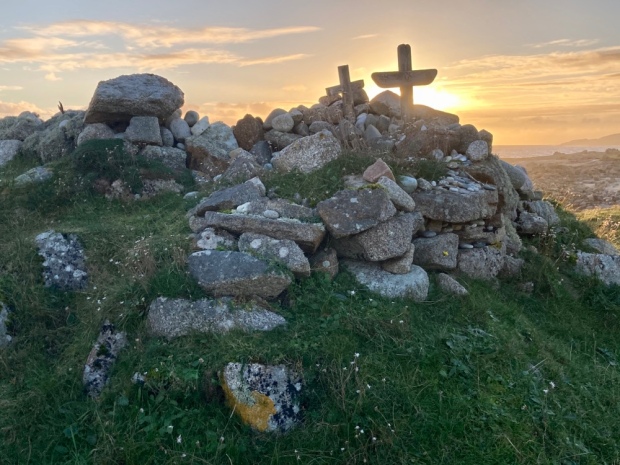