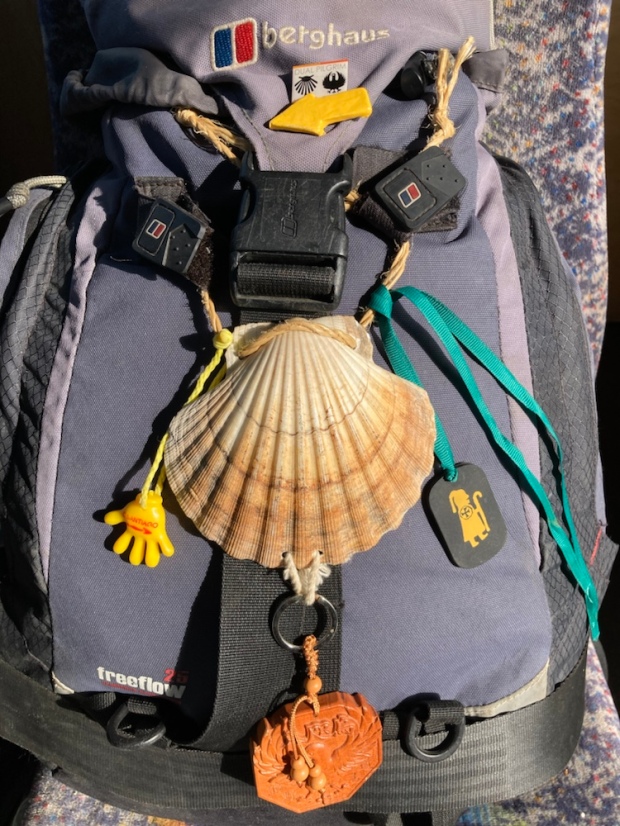 Off we go again. Continuing the Mozarabe from where we left off 2 years ago. This time it’s a 5 day, 105km pilgrimage through the olive trees of Granada and Córdoba provinces to meet the route from Malaga I walked 6 years ago at Baena.

We parked up there overlooking a massive 24/7 olive processing plant, and in the morning left the camper and took the bus back to Granada, found our first arrow, and set off through the suburbs and industrial estates and out onto the industrial farmland beyond.

At one point the route was blocked by drainage works and a young jobsworth tried to stop our progress before an old hand, seeing we were peregrinos, led us through towards Santiago. The power of the pilgrim! Looking back the snow covered Sierra Nevada slowly shrank as we walked beside deep irrigation channels of pretty foul smelling water and, after Atarfe and its monumental roundabout sculptures, beside the high speed railway line to Seville. We clambered up an embankment and entered Pinos Puente after 20km and 4 1/2 hrs walking. Not too bad for first day. 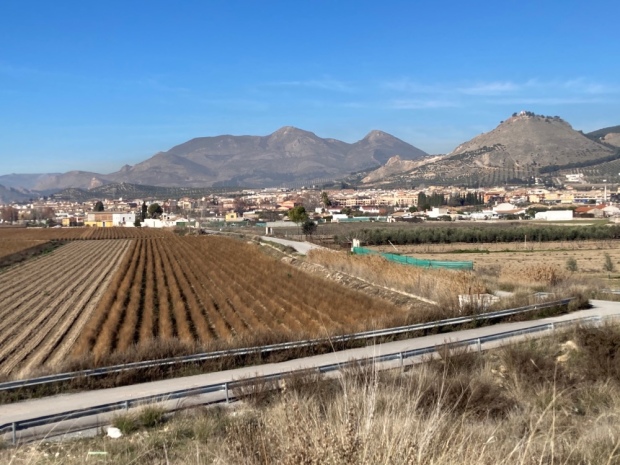 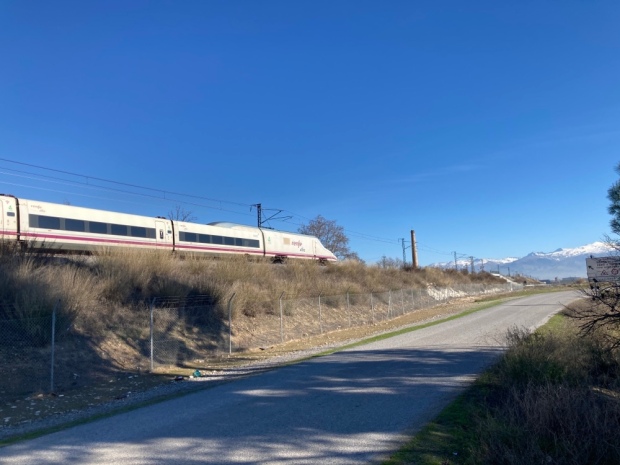 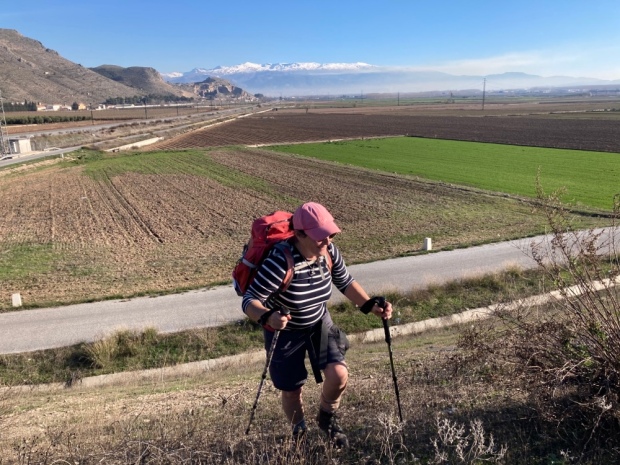 The hotel Montserrat looked after the pilgrims well giving us a 3 course dinner and a bottle of red for €10 each- and a fine bed to sleep on. Unfortunately we were dismayed by the huge amount of rubbish dumped on the roads and more shocking- in the river- as we made our way out of town in the morning on route to Moclin 16 km away.

The ornate ceiling of the bridge tower sheltered loads of swallow nests. 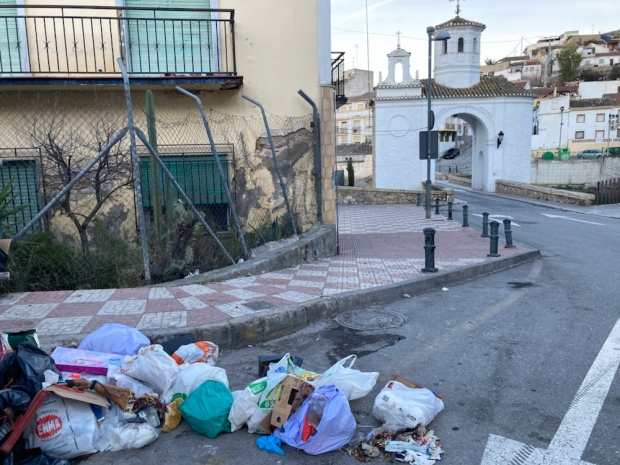 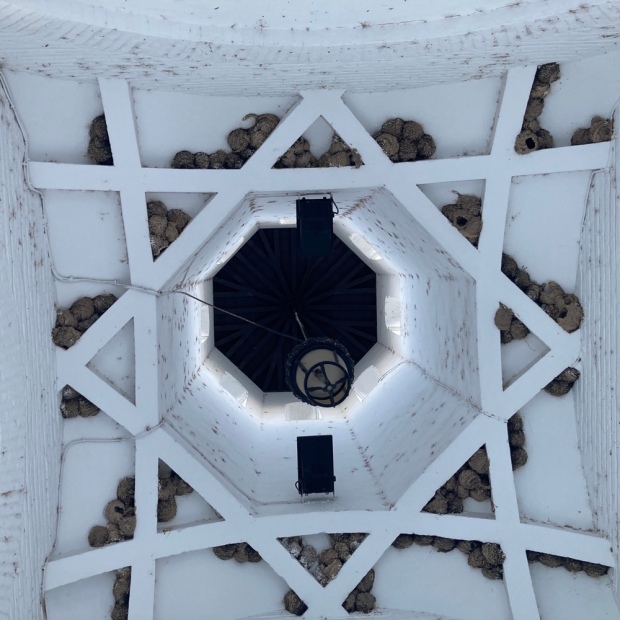 At last in open hilly countryside, but still on the road, we passed a ruined drying shed ( but had no idea what might be dried ) and poplar plantations , freshly pruned, growing alongside a river that offered the chance to swim in old mill ponds and natural rock pools – a bit cold today though with frost on the shadowed ground.

We finally turned off the tarmac at the ruined buildings of Cortijo Bucor. New huge concrete structures were being built hard against the crumbling originals, although the fine hacienda still seemed to be functioning, perhaps not its private chapel. There was a bit of an air of dereliction and it was sad to see way the dogs were confined- a familiar Spanish tale.

From there the Way led us through olive plantations on what looked like the original road. Still with cobbling intact in places in took us along the river valley on a track that rose and fell on the shoulder of the hills towards Olivares. 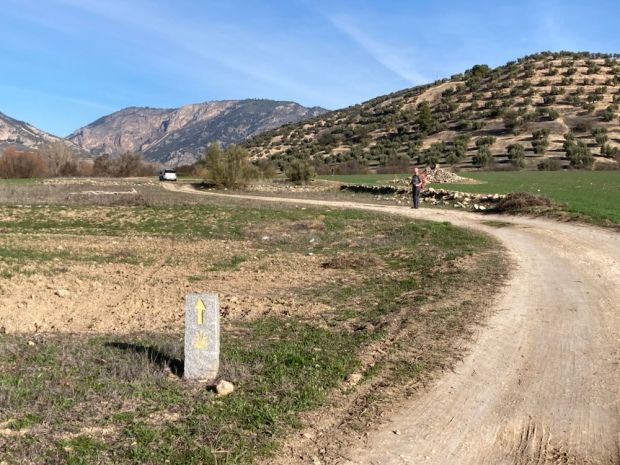 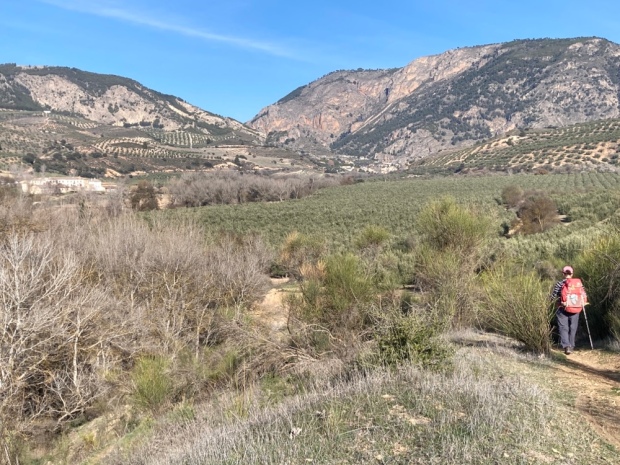 Crossing the river Velillos into town we had hoped for a cold drink but the bars were shut so we continued on. This was the hard but pretty stretch, a climb of 400 m up a track for 3.5 km to our destination. 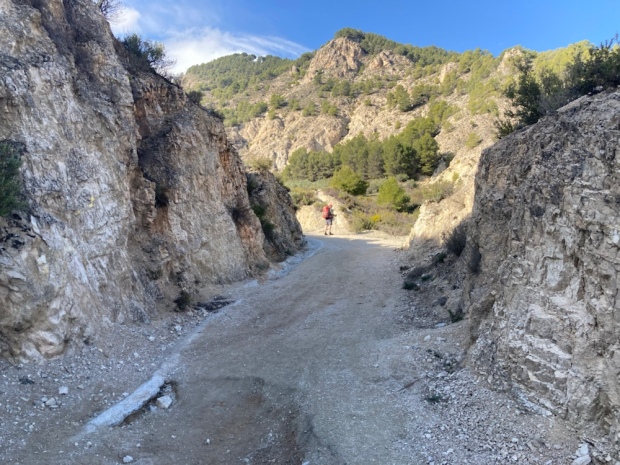 We stopped for food and rests at the sadly somewhat derelict area recreativa and again higher up where an amazingly complex structure was also rather unloved. 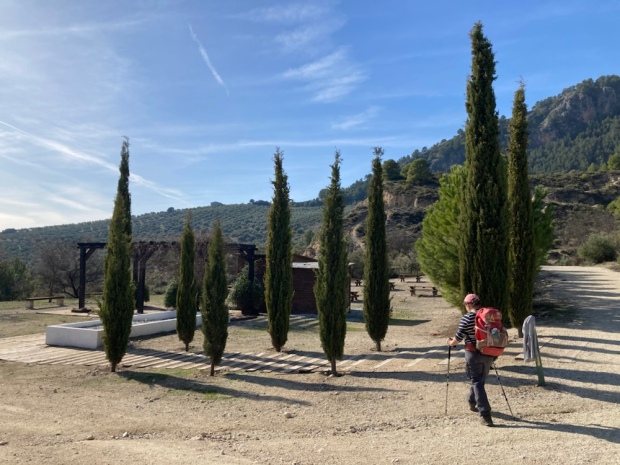 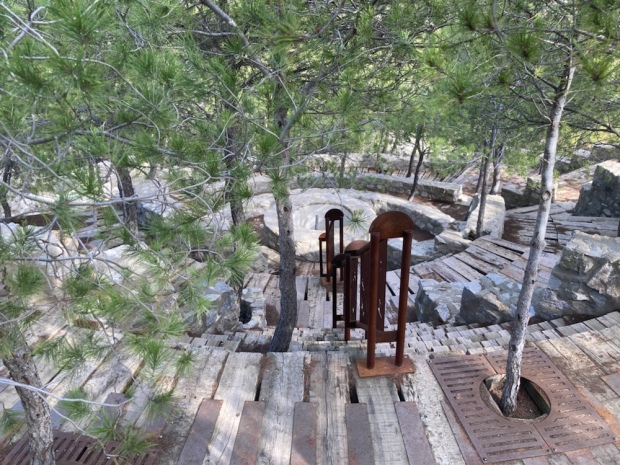 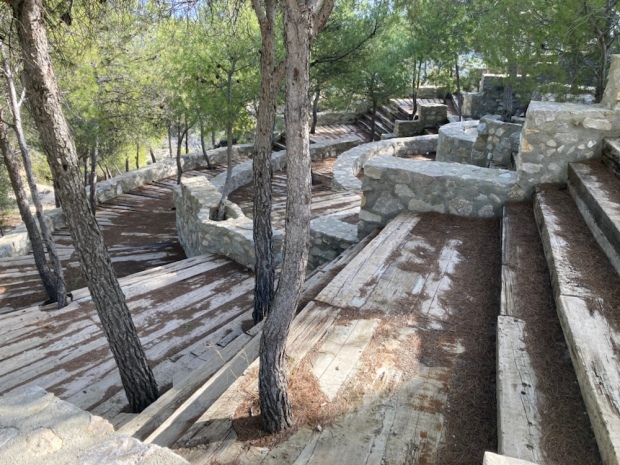 A mirador higher again gave us views over the entire days hike as well as down into the dramatic river gorge and up to the Moorish fortress walls of Moclin. Neolithic cave paintings were found on the cliffs below the castle and have been recreated in signage and motifs around the village. 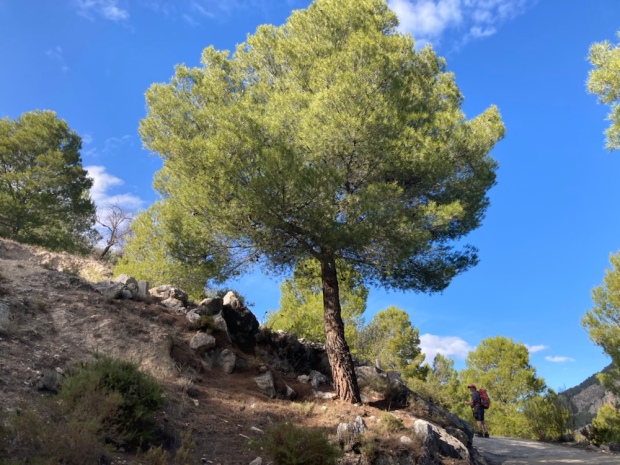 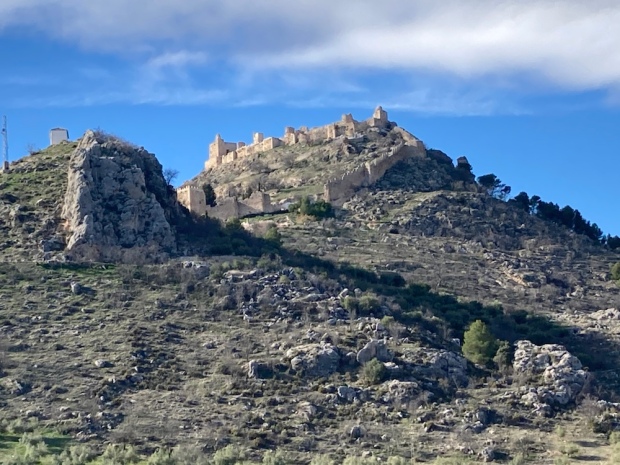 By the time we struggled the last few metres to our room for the night we had hiked over 16 km and the final climb had been tough. Our accommodation had been nicely renovated from ancient buildings and we looked forward to using the kitchen when the shop opened post siesta. 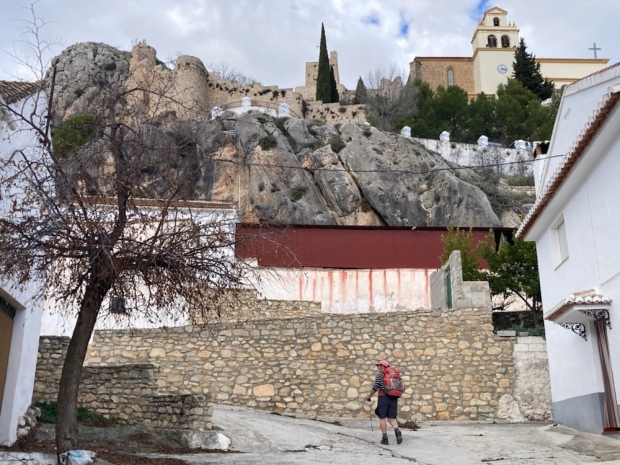 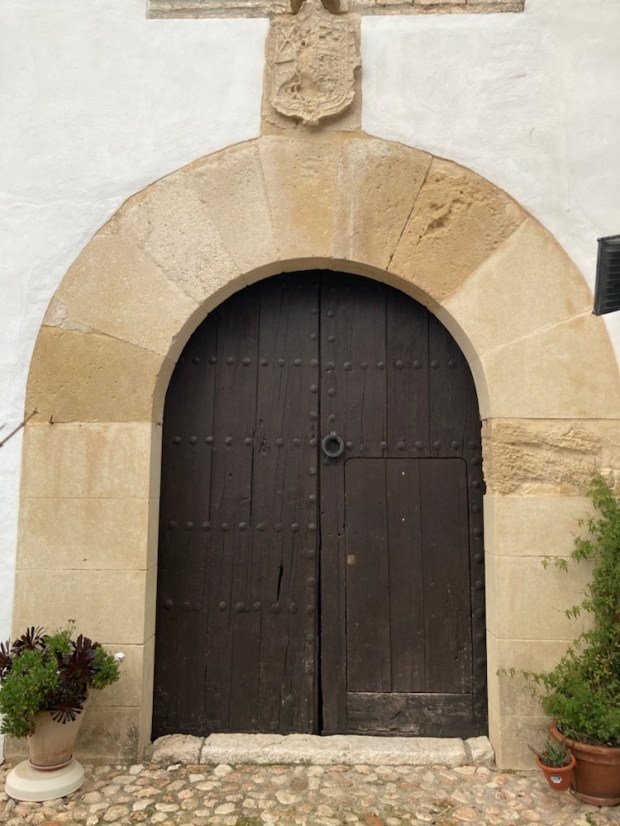 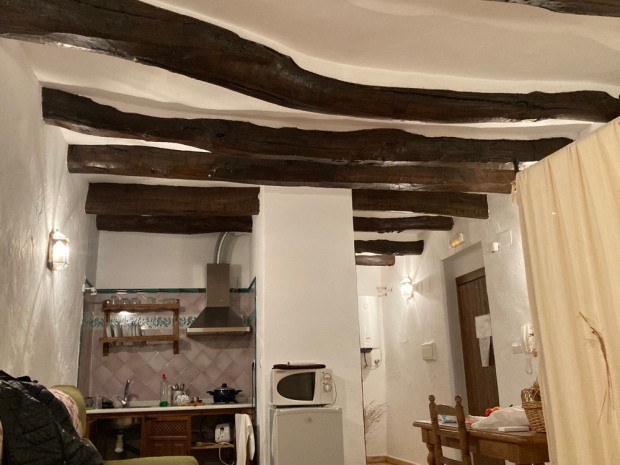 But it didn’t, and neither did the bar. No food, no drink. Luckily, whilst standing shocked outside the shop, the lady who had let us into our room appeared in the plaza and kindly gave us a couple of oranges and bananas and toms and eggs and tins of tuna and some bread. Praise be. The Camino provides.