Both of the last two stages of our journey on the Mozarabe from Almeria were spectacular and we were glad we had given ourselves the extra time that the stop in Tocon had allowed. It would have been a long haul from Peza to Quentar in one go, as it was we only had 16 km from one albergue to the next. As we walked past the big walnut trees below the bar, whose nuts the family had been cracking as we’d had dinner the night before, a woodpecker was hammering away in the branches above us.

We walked out of the village on the road for a km or so then turned up through boar churned woodland to a sparsely vegetated hillside and rejoined the original Quéntar route along a gravel track that climbed higher and higher.

Juniper appeared amid the white crazed rock that covered the landscape and we followed the track in a massive zig zag down to an area recreativa among riverside poplar trees. 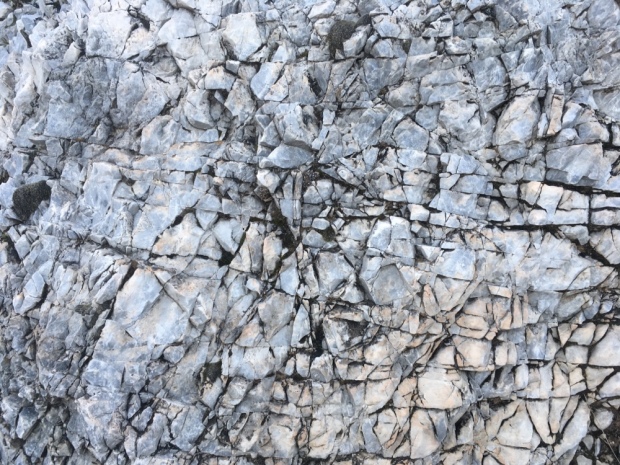 Climbing again we passed through a pine wood that had been tapped for its resin. This thick sap like substance produces both rosin and turpentine. Apparently demand is on the increase because the natural material substitutes pollutant petroleum derivatives. 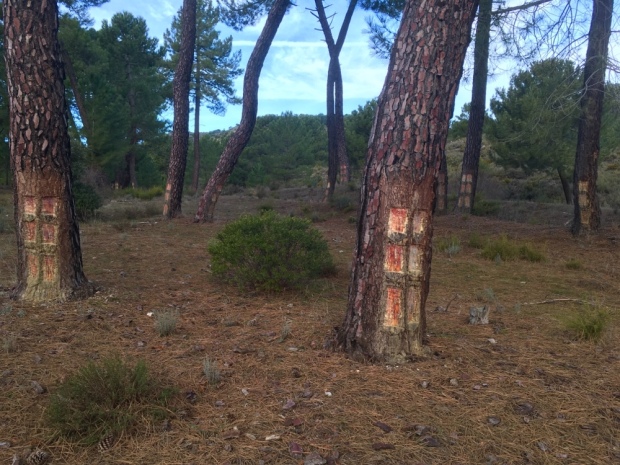 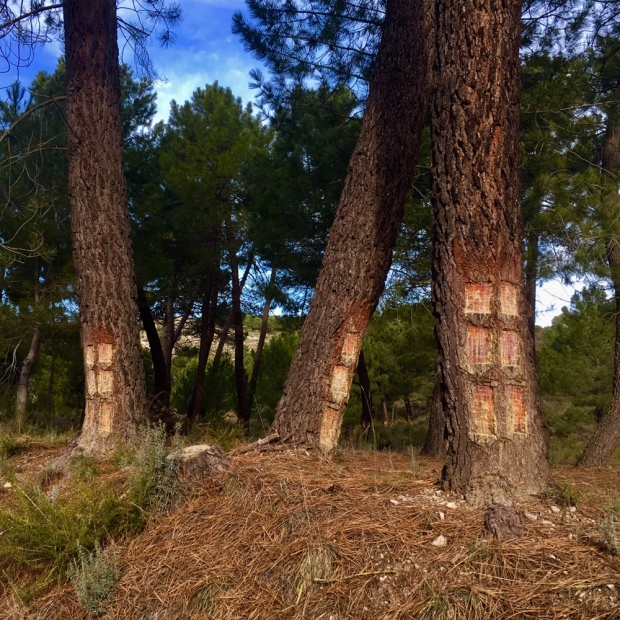 Higher and higher the track led us to more and more spectacular views of the Sierra Nevada’s and the hills that enveloped us. New benches,map boards and post and rail fencing were signs that there was a fair investment in encouraging this Camino route or hiking the area in general.

And then we finally reached the highest point of the entire route at the bizarre surroundings of an old talc mine. 1418m high with views across to the highest peaks in mainland Spain, covered in a smooth shiny white blanket. 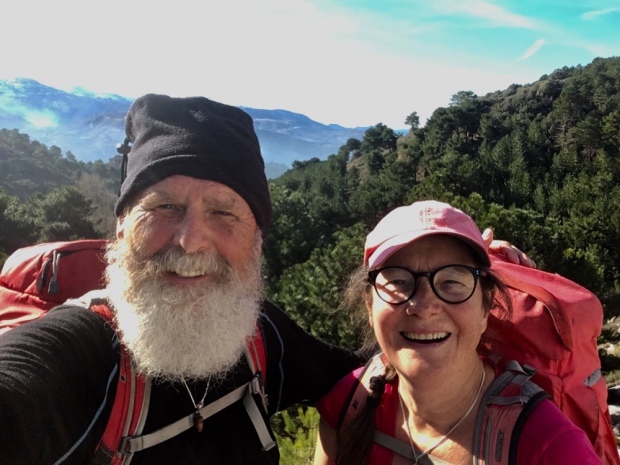 What goes up must come down, and so we started our descent towards Quentar, passed some lovely fincas set among a sea of olives. 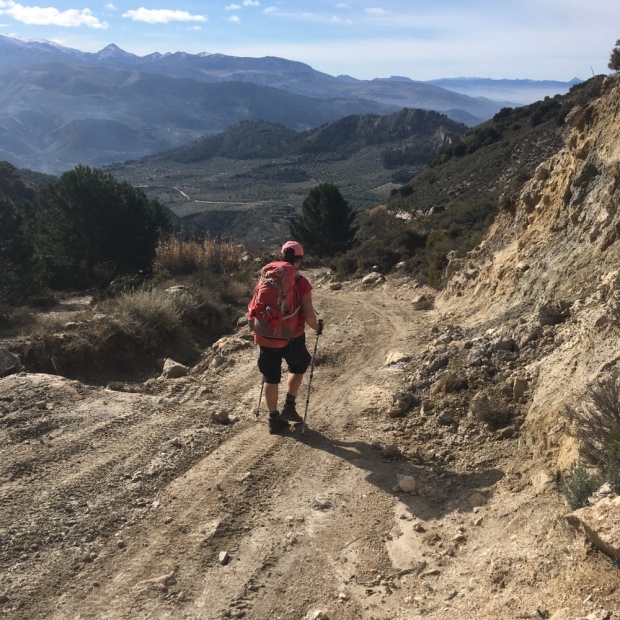 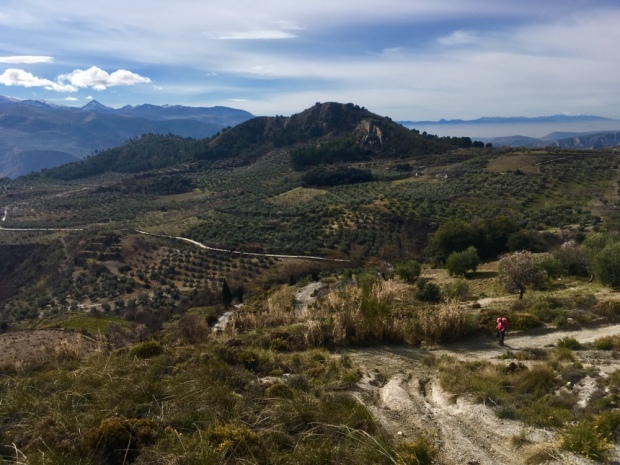 The almonds were flowering nicely as we approached the village, busy with bees from the hives we’d seen higher up the trail. Soon enough we were in the town and installed in our little hut complete with a tiny terrace in the sun. 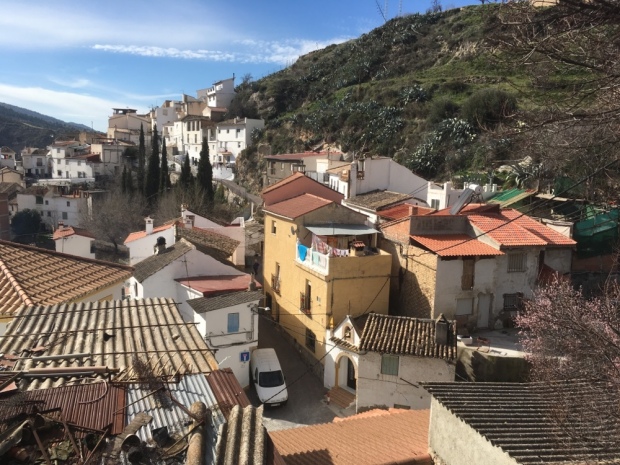 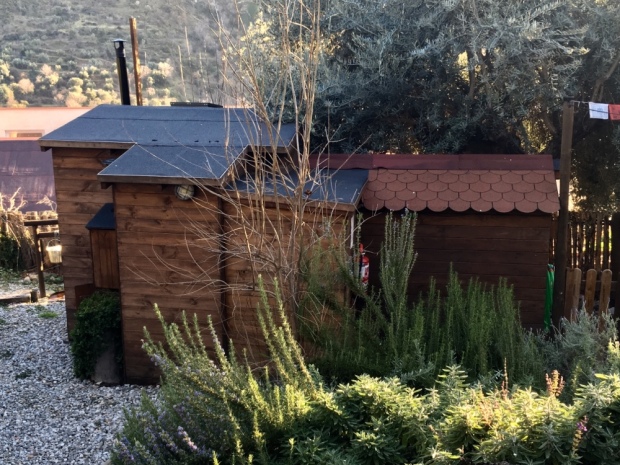 Following the yellow arrows down through the town in the morning we reached the river and turned along it, watching the ducks ride the mini rapids beside us. Turning up a narrow verdant path that led to a series of well watered gardens and orchards we soon reached Dudar, a village celebrating its saints day and the origin of all the fireworks that we’d heard in our cabin the night before. 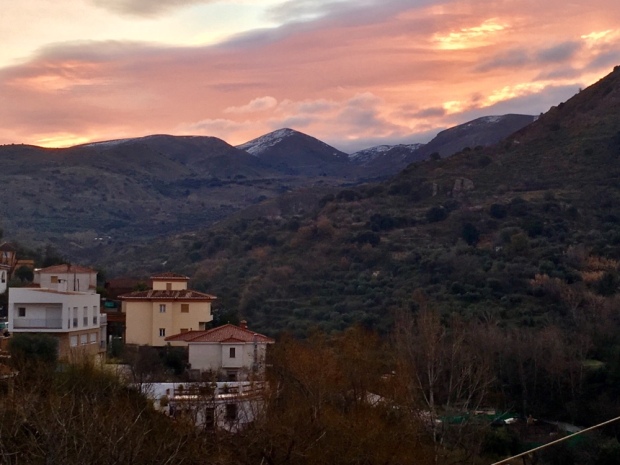 Up again out of the village steeply for 200m altitude gain, to arrive at the remains of impressive French engineering works from the 19th century. A major water syphoning system to bring irrigation from one hilltop to another.

We reached the ridge and enjoyed a long hike along the easy track soaking up the distant vistas as explosions from Dudars celebrations echoed around the mountains. For once we were sharing the Way, with weekend runners, cyclists, walkers and motor-bikers. 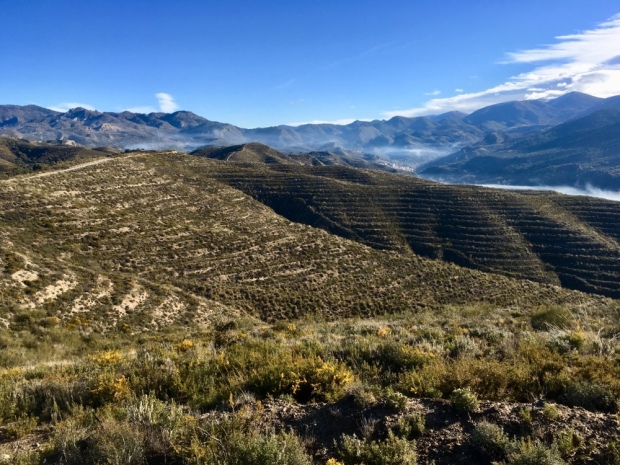 It was getting busy. And getting cloudy/ smoggy- we weren’t sure. But we were above the thick blanket that covered Granada. Our route turned down off the ridge, towards the ruins of a massive Jesuit monastery surrounded by olive groves that were being harvested by a gang of men and a lot of machinery, including the tree shaking tractors with the encircling funnel screens (you’d have to see them). 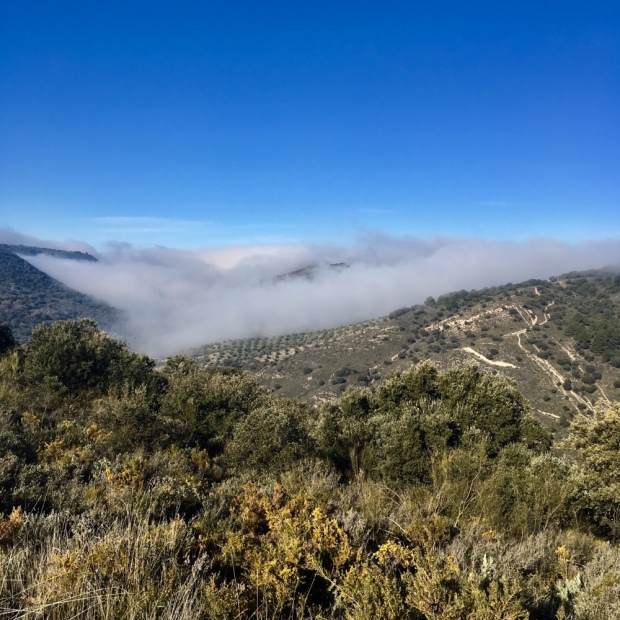 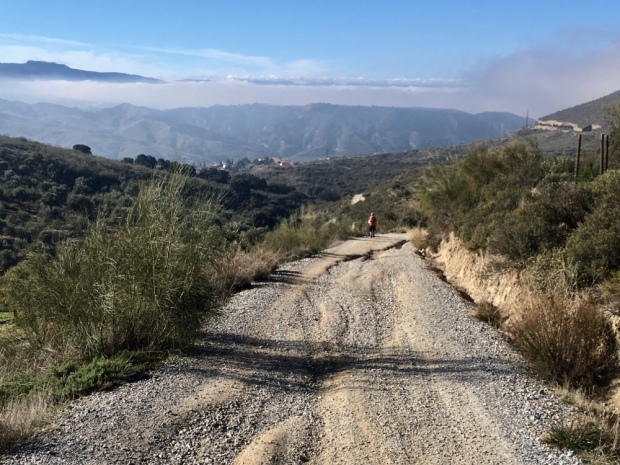 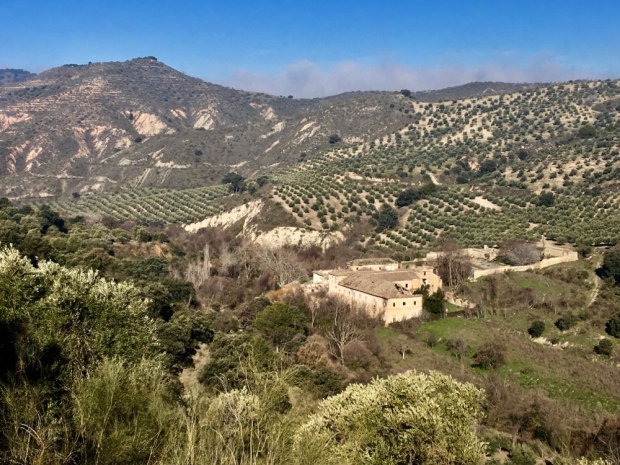 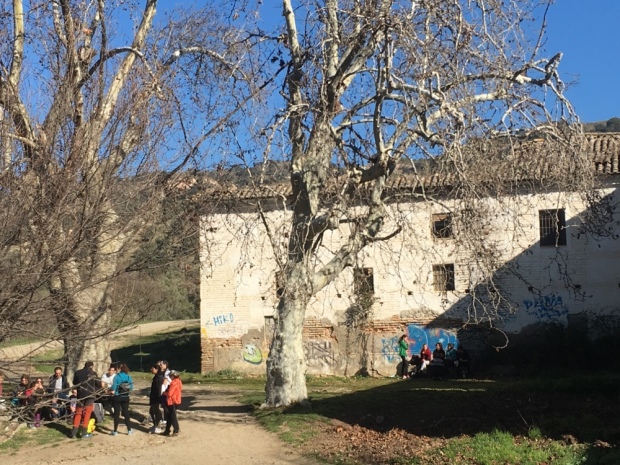 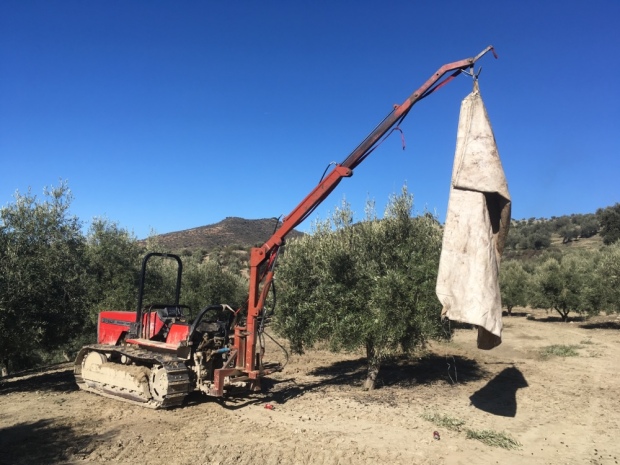 We nearly lost our way crossing the olive grove-( grove seems to imply somewhere small and intimate and not the immense and poisoned industrial scale monoculture they so often are) but followed the incline down to the rushing waters of the Darro river and a lush path to the gardens of the Sacromonte abbey. 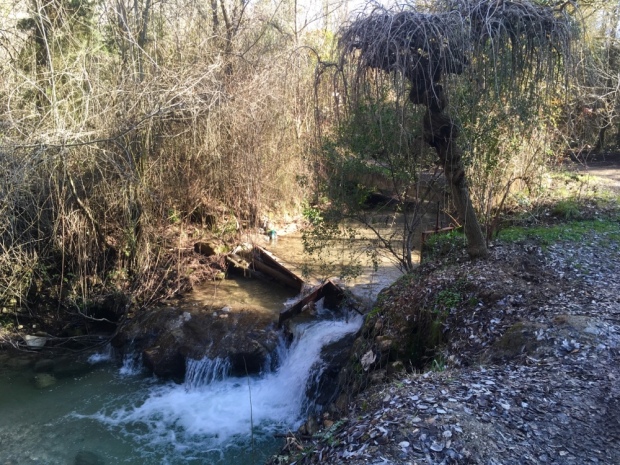 Suddenly we reentered a world of people after 10 days of near solitude. Saturday in Granada is busy of course and we had to adjust quickly as we moved through the throngs in the old city beneath the Alhambra and played spot the Camino sign in the centre. 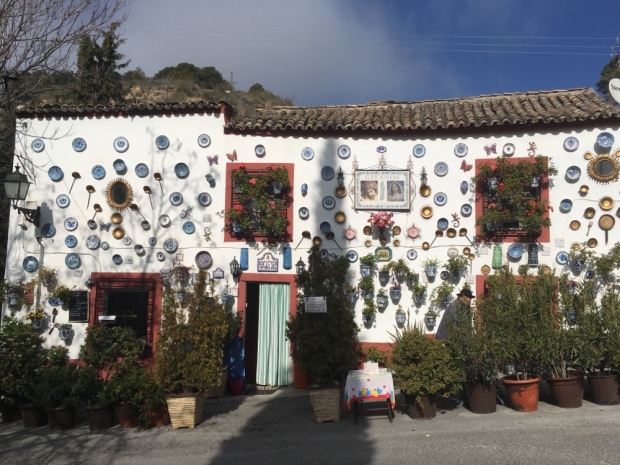 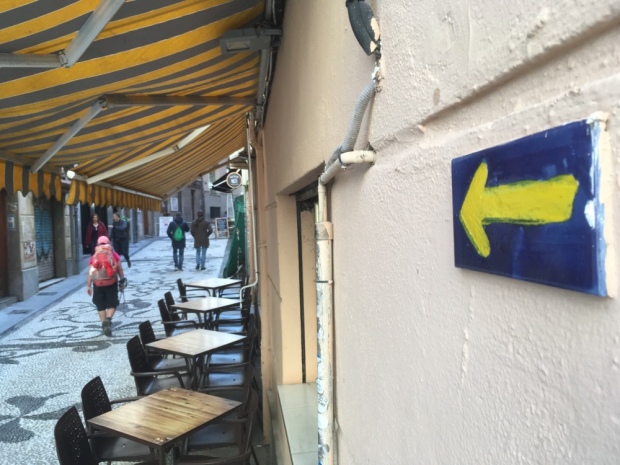 The various arrows and apps deposited us outside the doors to a church in the corner of the huge monastery of Santiago. We were in the wrong part of the convent but saw all the St James symbols and headed in to get our credentials stamped for the final time.

The place was full of a wedding party- whoops- so Sally waited with the packs outside and, assured by someone who seemed to know that yes , this was the place, I ventured in. I was confronted by all the wedding guests posing in front of the ornate gold leaf alterpiece and was pressed upon to become the wedding photographer on their cameras. After performing my duties to their satisfaction I squeezed through the crowds and managed to get a nun to get our credentials stamped and returned to me in the crush of celebrants. Job done. Time for a selfie. 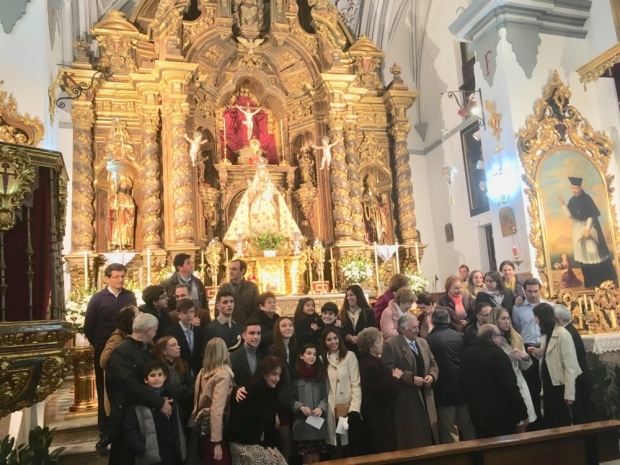 A slightly surreal ending to a great weeks hiking on what is now my favorite Camino route.